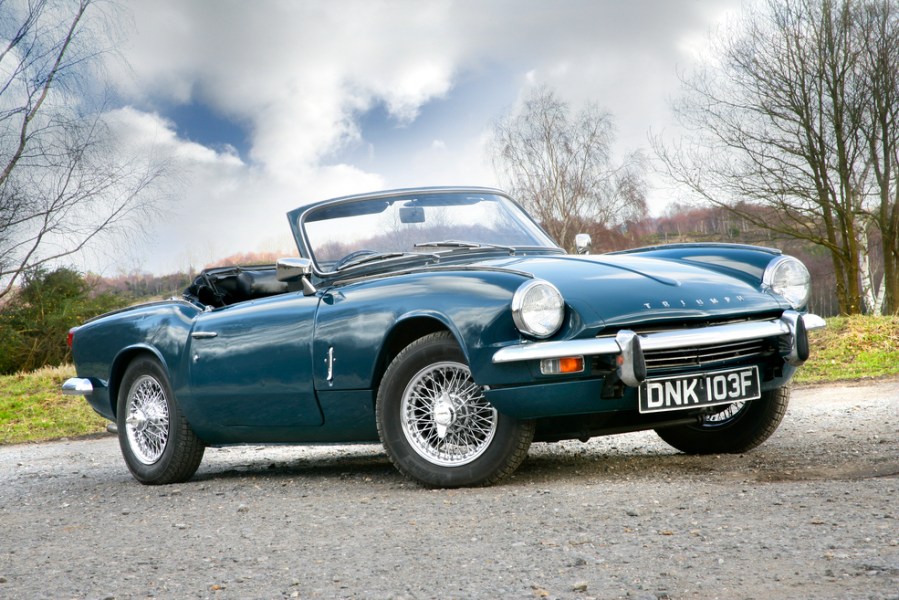 We take a look at some of the sub £10k 1960s classics which shaped the decade famously dubbed “Groovy”.

There’s still something evocative about the 1960s that subsequent decades have failed to capture. Was it the new found liberation of children born to the baby boom? Perhaps it was the freeing effect of developing culture, the proliferation of television and film culture, and the easy access to music for those seeking to make their own. Regardless, when viewed alongside the cheesecloth Seventies and red brace Eighties, the Sixties has an appeal which has endured to this day. If you want to relive half-decade old nostalgia, here are some of the finest classics you can park on your driveway from £1000-£10,000. 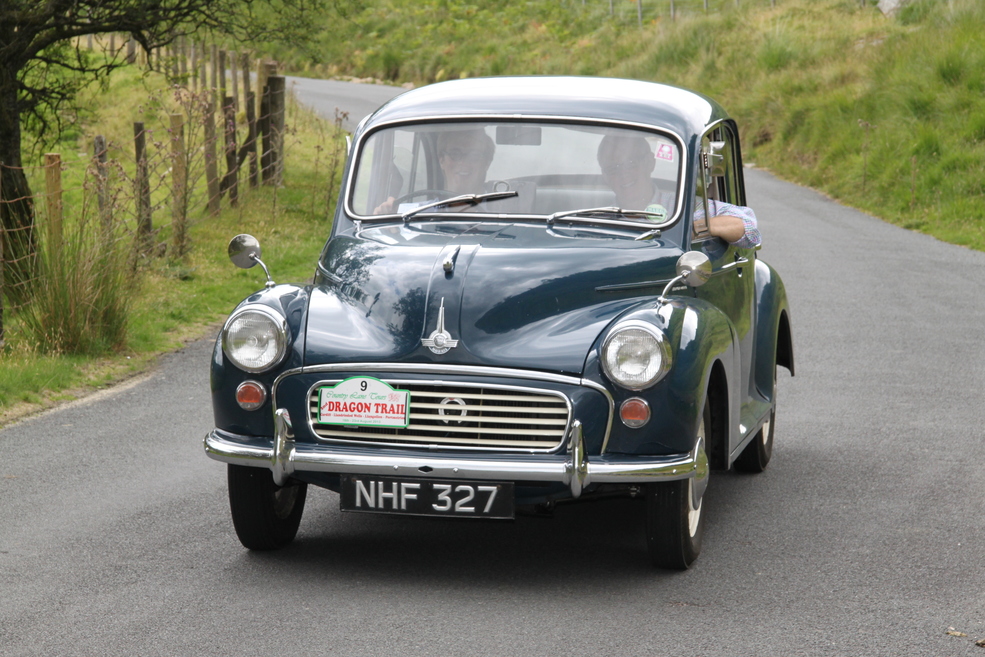 While we think of the Morris Minor as a post war model – which indeed it was – it enjoyed some of its greatest success in the 1960s. By then it had become the Minor 1000 – with a choice of 948 or 1098cc engines depending on its model year.  The range spanned two saloons (2 and 4 door), a convertible, and the perennial half-timbered Traveller estate. For commercially minded people there were even Minor-derived pickups and vans.

And it’s one of the simplest classics to run, courtesy of the A-series engine and low-tech suspension the Minor is one of the easiest cars upon which to lay a set of tools. You can teach yourself home mechanics, and the club has an active social scene for those keen to get involved with the classic car community. It might not have the same sense of sixties swing as some of the cars on our list, but for every Austin Powers there was a Nurse Glady Emmanuel going about her business in her trusty Minor. With production lasting into the 1970s, the Minor’s place as a Sixties icon is in no doubt. 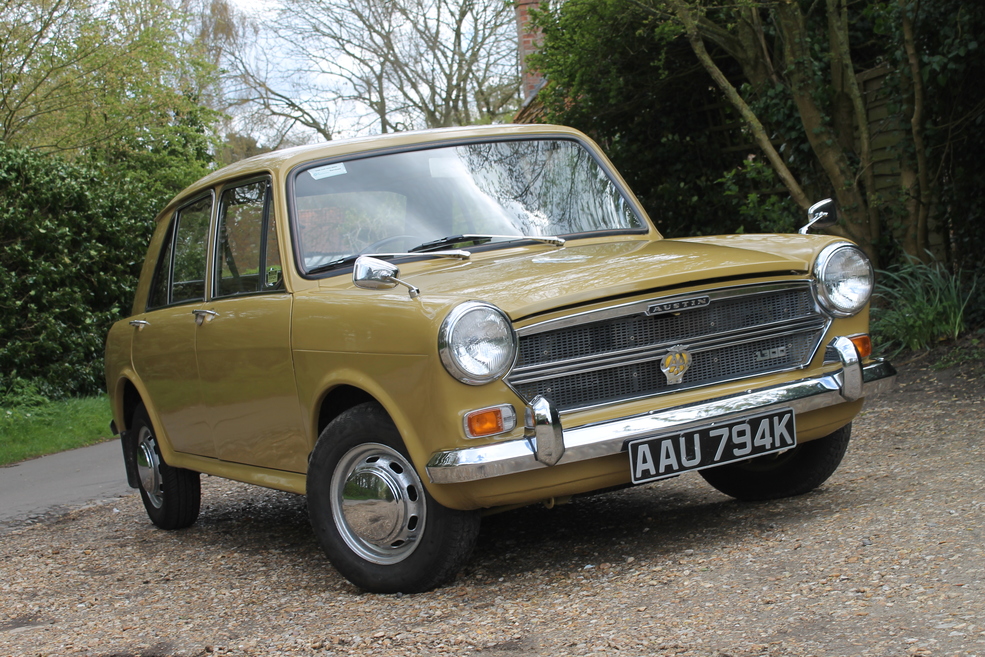 One of many models BMC sought to replace in the early 60s was the Minor – and the ADO16 was its attempt to do so. Along with the Austin A40, the Riley One Point Five, the Wolseley 1500 and the lower echelons of the MG Magnette market, BMC felt that one model could serve the needs of the many and launched the ADO16 family to widespread acclaim. It was, after all, a big Mini – and the different brand identities meant there was a model for everyone, from the distressed hotelier with his Austin 1100 Countryman to the retired barrister nestled snugly in Vanden Plas comfort.

Facelifted twice, the ADO16 range enjoyed the top spot as Britain’s best-selling car for most of the decade, typically in proletarian Austin and Morris specifications, but with prestigious Wolseleys, MGs and Rileys selling well in well-heeled areas too. Late in production the replacement of the MG with the 1300GT (in line with Mini policy) resulted in a useful little pocket rocket – and one of the most desirable models in the range today. As a rule, 1300s are more desirable the equivalent model year 1100s, though early cars are even more desirable overall. 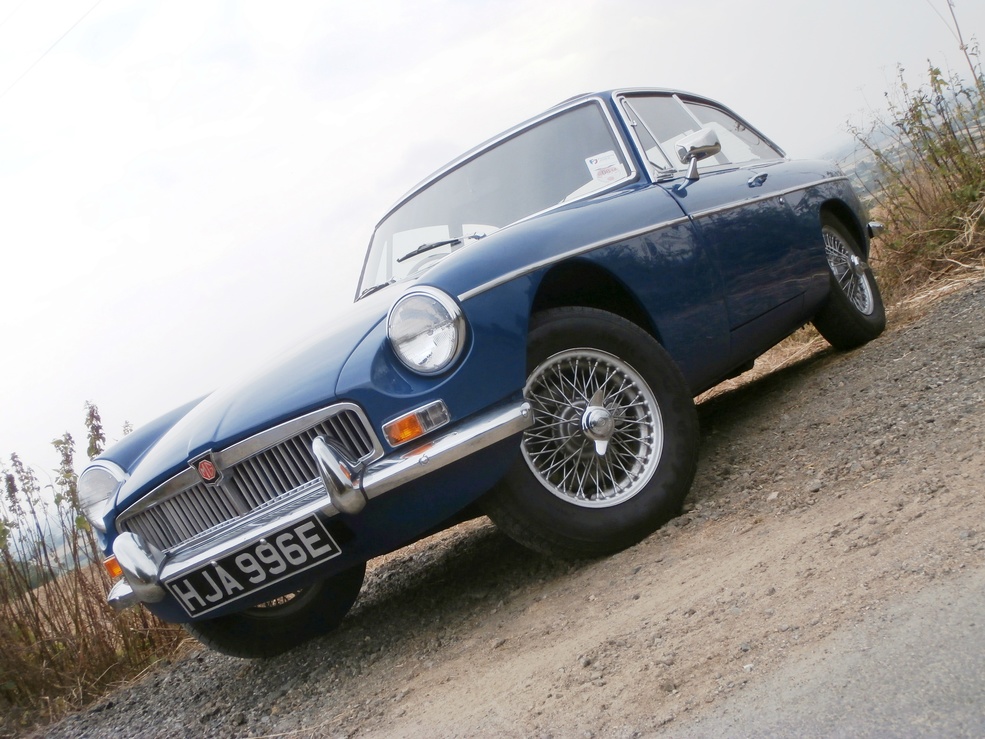 The MGB is almost the archetypal classic sports car – and with excellent reason. And while we in the classic car press have said everything there is to say about the MGB 1000 times before, that’s no excuse not to say it again. The B-series engine is torquey and willing, while easy body and mechanical spares availability makes it one of the simplest classics to own and maintain. There’s nothing complicated about it either; a genuine home DIY prospect for those keen to get oily.

The only real snag is that as a two seat convertible, it’s hardly practical. Oh hang on, BMC solved that one too. The pretty MGB GT offers more interior space and more usable luggage space without compromising the way it drives. And if you still want wind in the hair fun, you can always get one with a Webasto roof. Wire wheels and overdrive are desirable options on Mk1 and Mk2 MGBs and can command up to an additional 15% – GTs are worth about 20% less than equivalent roadsters, making them the better bargain. Check the castle rails and sills for corrosion; popular rot spots on the B, and not jobs you want to be doing despite easy panel availability. 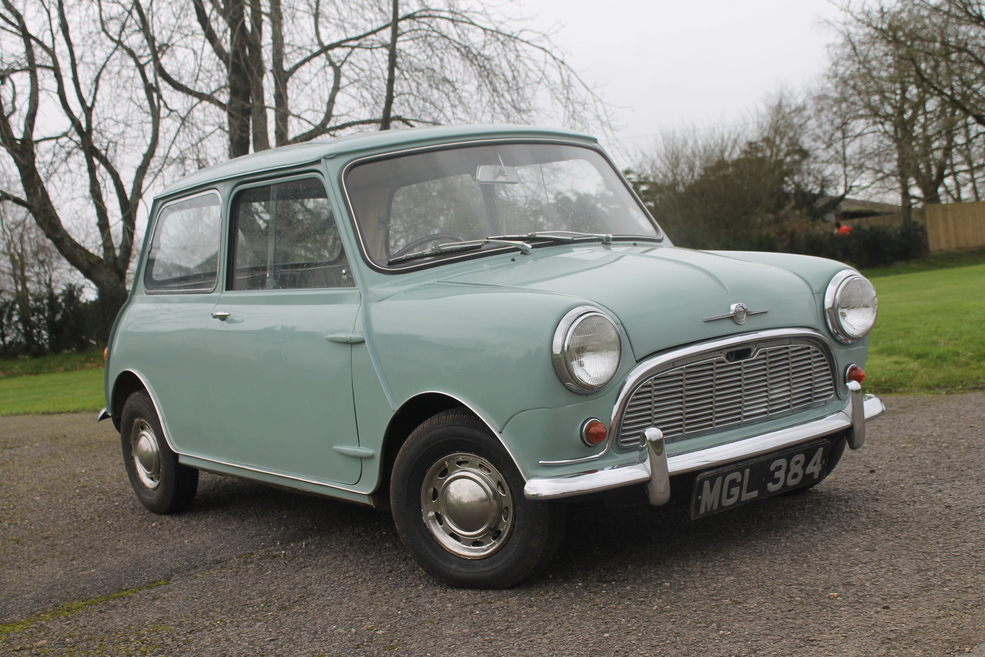 You can’t really write a feature on icons of the 1960s without making reference to the Mini. It had as big an effect on the culture of the decade as the other famed micro-accessory, the miniskirt. While the Mini was a slow seller at first, BMC’s product placement with various celebrities put wizardry on wheels into the public eye, and sales never once looked back.

But the truth is that the Mini took over a decade to turn a profit – it was a loss-leader for BMC, which lost money on every single MK1 and MK2 sold. While the pearls and twin-set brigade had their Elves and Hornets and the rally world took the Cooper to its hearts, the Mini became a staple of suburbia. If you grew up in the Sixties, you knew someone who had one – an uncle, or a brother, or maybe you learned to drive in your mother’s Super Deluxe. These days – and with good reason – early Minis are worth a mint. Of our list, this is arguably the greatest investment classic. 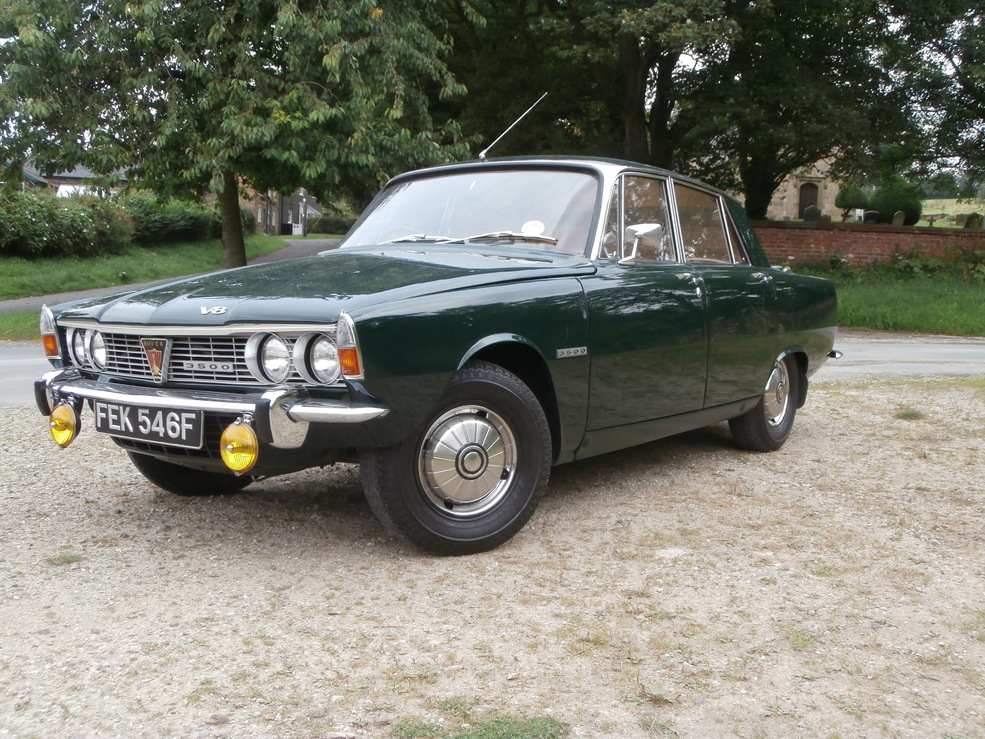 When Rover came to replace the P4, the executive car market was changing. No longer was the staid saloon the car of choice – bank managers had given way to thrusting young executives, and they wanted a sports saloon. Something with the same appeal as a Jaguar, but with more cutting edge thinking. And the P6 was perfect – developed originally to house a turbine engine, hence the cantilevered front suspension, the rear utilised an early take on the concept BMW would popularise as a Z-axle, coupled at the rear by an expanding de Dion tube. The engine was new and revolutionary for Rover too – a two-litre four with just as much pulling power as the company’s older sixes.

The Triumph 2000 provided solid competition, but for many the craftsmanship of the Rover put it ahead. The doors always shut with a weighty clunk, the bootlid and bonnet delicately clicked into position, and the use of new materials like Formica for the trim meant that the cabin always felt more cutting edge than its rivals. The P6 makes for a fantastic classic daily driver today – practicality and style in spades. 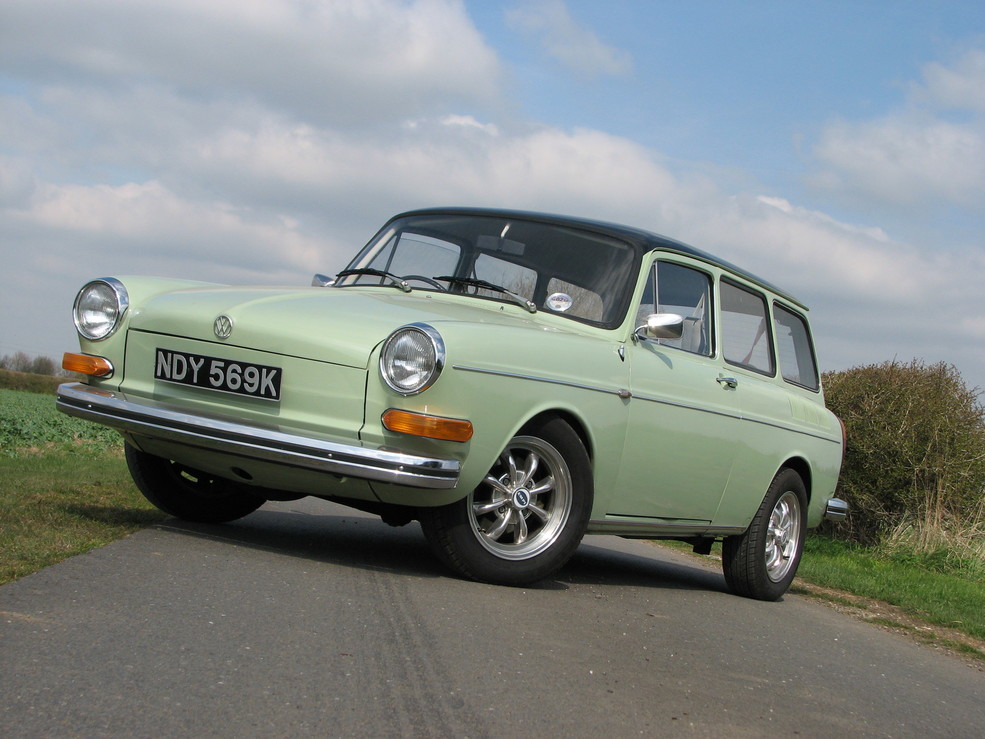 Heinz Nordhoff’s insistence on maintaining the Beetle in production and using it as the basis for development almost killed Volkswagen. The front wheel drive Audi projects which were the initial prompt for what became the Golf were done without permission, and it was only once Nordhoff left the company that VW was willing to put its eggs into the rapidly advancing FWD basket. The first attempt to replace the Beetle had been very different…

The Type Three of 1961 was closely related to the Type 1 under the skin – it shared the wheelbase, suspension design and rear engine layout with the original Volkswagen models. But its bigger engine made it more usable, and the ponton sided bodywork more contemporary than the Tatra-inspired airflow design of the Beetle. A wider range included a three-box saloon, a coupe and a three door Variant estate, with the engine mounted underneath the boot floor. As a classic today, the Type Three makes sense as the mechanical componentry is identical to the more common Beetle, but the more unusual bodywork means you’ll stand out at shows. Especially in a standard example – the modified VW scene has taken the Type Three to its heart… 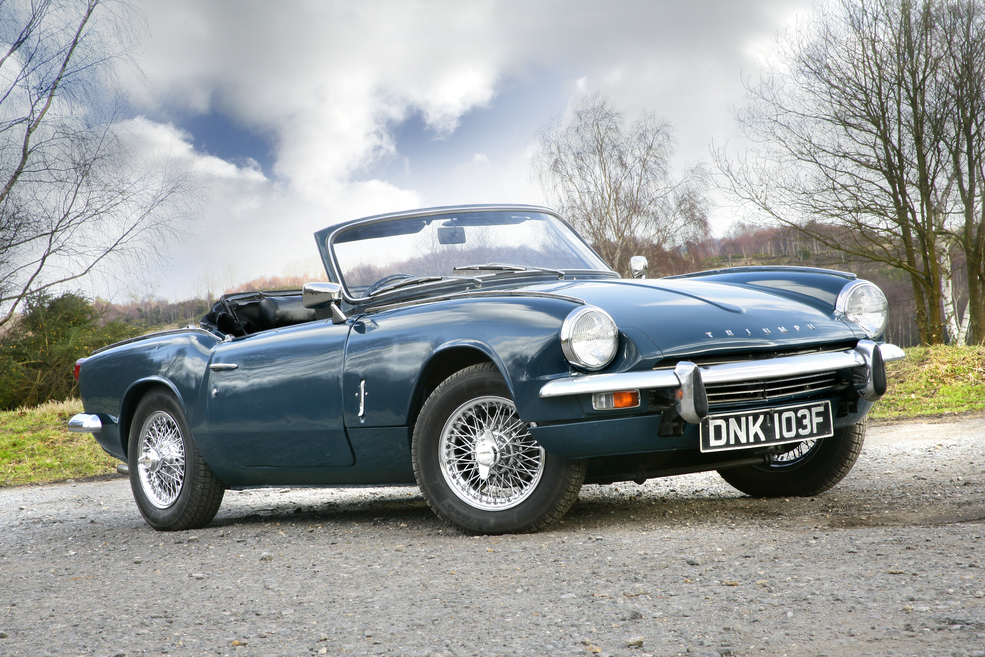 The Triumph Herald was given a separate chassis born of necessity – nobody had the capacity to make complete shells for Triumph. But the beauty of a separate chassis design is that the chassis can be adapted to suit other models. Triumph’s riposte to the MG Midget utilised the Herald drivetrain under a sporty new Michelotti body redolent of a Daimler Dart without the awkward tailfins.

Progressive updates saw bigger engines and a raised bumper, before the 1970 MKIV which brought the looks into line with the new Triumph corporate appearance. Meanwhile, by dropping in a Vitesse engine and fitting a hard roof Triumph had expanded the lineup further with the GT6 – a sub TR six pot GT for those who couldn’t bring themselves to buy an MGB GT.

Most desirable Spitfire in practical terms is the MK3, though many find the lower bumper of the Mk1 and Mk2 more cosmetically appealing.

Any one of our ten grand Sixties heroes would be a brilliant classic to own and enjoy, courtesy of impressive spares availability, charm and east of use. Some are popular, meaning they can be the basis of new social groups – while some enjoy a rarity that will make heads turn wherever you go. It’s impossible for us to pick our favourite – to join the debate, head to our Classics World Facebook and Twitter pages.