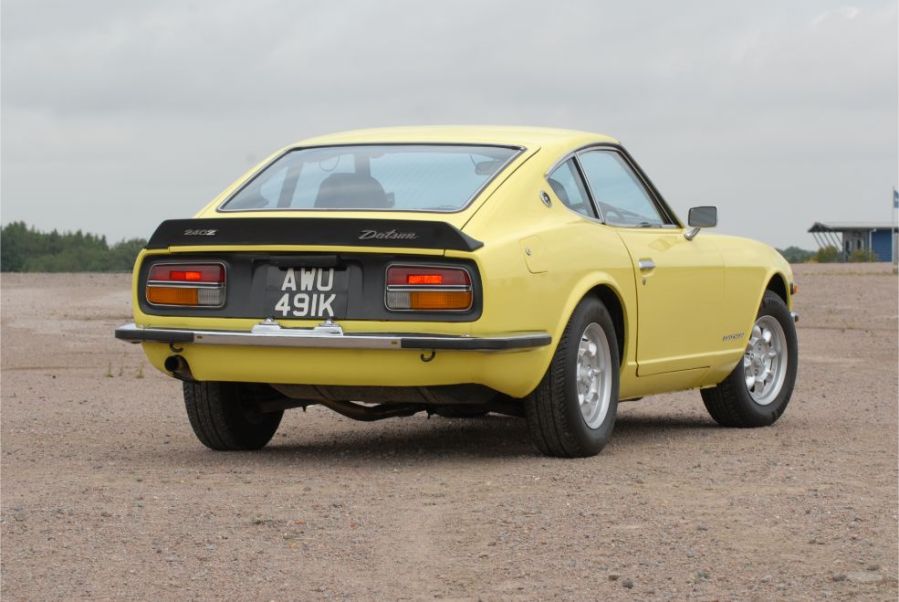 The first of Datsun’s Z-cars was a purchase for the brave back in the early ’70s, but owners soon found it moved the game along from the MGB era. Which makes the better classic today though?

The 1970s was a decade of immense change for the affordable sports car during which the two-door coupe was gradually overtaken by the idea of the hot hatchback and the safe handling of front-wheel drive. Indeed, as the 1980s dawned, the MG brand was facing extinction as Michael Edwardes swung the axe over its historic Abingdon home.

The end of the road (albeit temporary) for MG was just the beginning for the Japanese makers though and if the idea of a Japanese sports car seemed absurd in the early ’70s when the early Sunnys and Bluebirds were gaining middle-of-the-road buyers with their reliability and standard-fit radio. By the end of the decade though, they were credible players indeed – especially in the all-important US market.

The sports car rivalry in the USA  between traditional British makers and the upstart Japanese was also played out in a smaller scale on the British market where the MGB GT had been launched in 1965 and the Datsun 240Z first hit the showrooms in 1970. Over in the USA, they were similarly priced, although the Datsun was the more expensive car here by some margin. 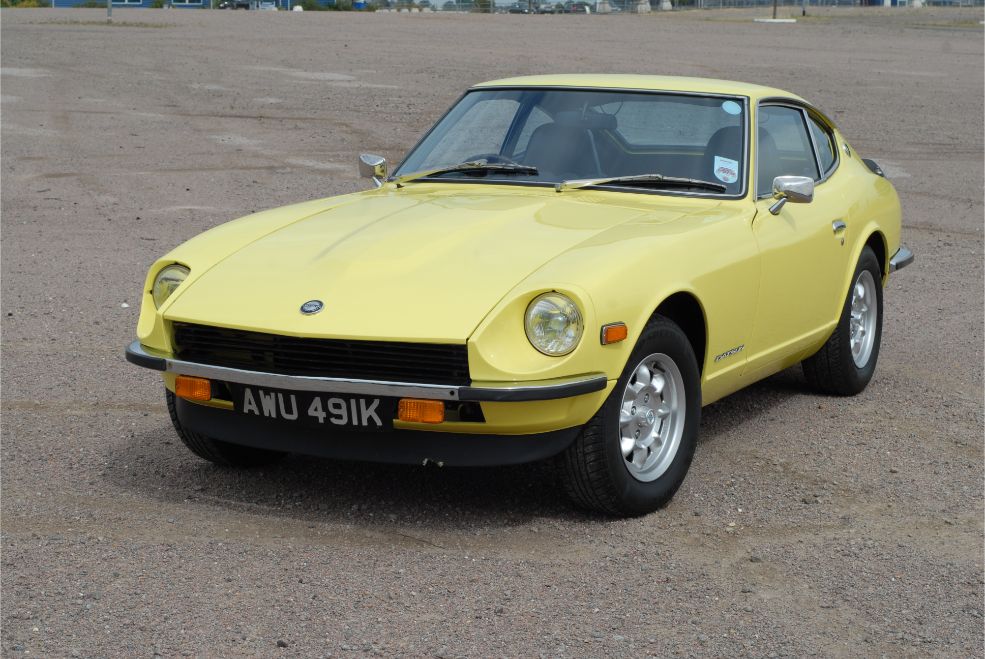 The Datsun 240z was a fascinating proposition for the 1970s coupe buyer, since it essentially offered E-Type performance for MG money, but the whole idea of Japanese cars was strange and new back then, meaning that Nissan had to be ahead of the competition to make any inroads into the market on either side of the Atlantic.

Nissan also realised that although its front-drive saloons were gaining in popularity, it needed a halo model to create its brand, while a sports car would complete the model range nicely.

Historically, fast Japanese cars have generally relied on high-tech small-capacity engines, routinely employing twin cams, 16 valves and trick valve timing long before they became commonplace on European cars, but in the US market the V8 was still king so the firm knew a six was the minimum it could get away with. 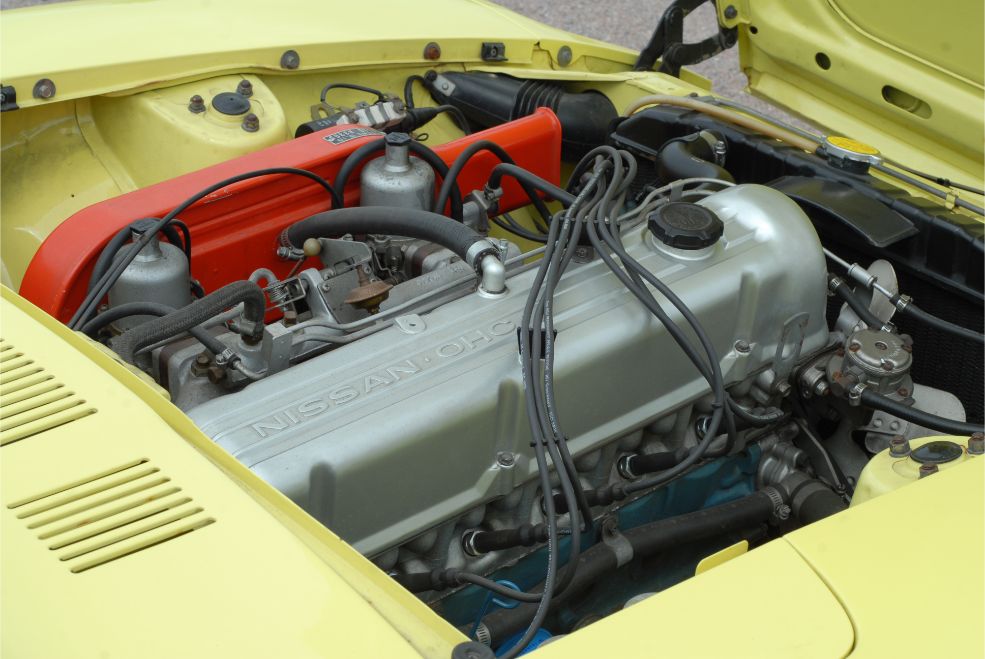 The engine chosen was the straight-six borrowed from the home-market Laurel saloon and was a direct development of the four-cylinder Datsun 1600 engine – in turn thought to have been a copy of a Mercedes design.

With a single cam in the alloy head and breathing through twin SU-style Hitachi carburettors, the 2393cc unit was good for 151bhp and ensured the car had spritely performance.

Rather than repurpose an existing platform, Nissan created an all-new design for the first of its Z cars and the result was neatly proportioned and dramatically modern in appearance, complete with a practical hatchback, even if it did offer just the two seats.

Its underpinnings were as modern as the MGB’s were archaic, using MacPherson struts at the front and a Lotus-style set-up at the rear with the driveshaft forming the lower link.

This gave it better traction than the leaf-sprung Ford and MG competition, with road testers of the day commenting that in the dry it gripped better than anything else. In the wet, it would slide with the best of them although testers found it easily controlled. 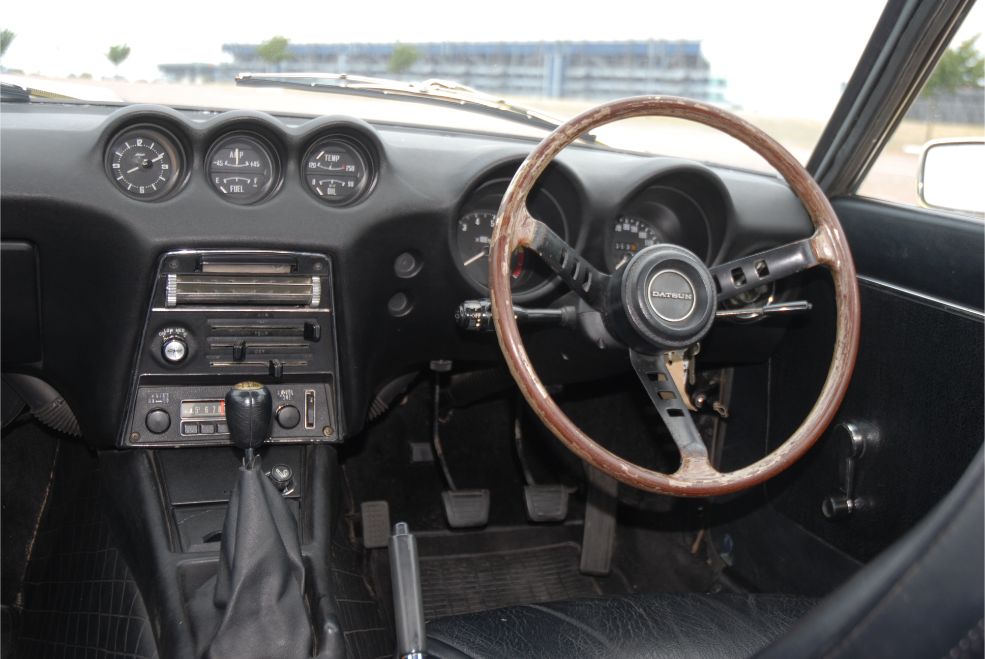 Driving a Datsun 240Z today is a fascinating experience. Despite all of us being used to piloting early ’70s machinery, the propensity of early Japanese cars to rust in the British climate means we’re simply not used to something of this vintage being Japanese and against the domestic competition it all seems so very modern. The black plastic dashboard moulding is neatly hooded over the dials, the seats have neat little built-in ventilation holes and the radio was even designed in from the start. It goes without saying that full carpeting throughout, heated rear screen, locking fuel cap, reclining seats and even alloy wheels were all standard. Oh, and a five-speed box too.

The 240Z can be hard work to drive smoothly until you’re used to it, but despite the performance promised by the straight six’s meaty soundtrack, the car is no harder to drive than a small saloon car – and this in an age when performance at this level often made a car physically demanding to drive. 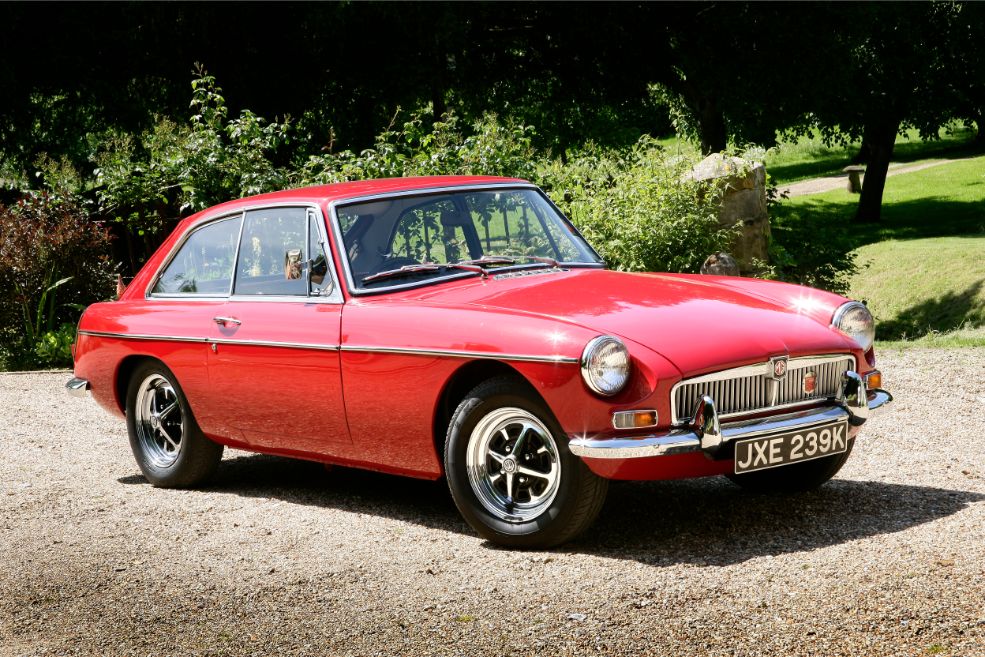 Step straight out of the Datsun into the MGB and the British car feels like it’s from a different era… which of course it is. As most readers will know, the B was launched in 1963 with the GT coming on stream in 1965, so although the coupe isn’t much older than the Datsun it is based on a far older design.

It doesn’t look any less striking though, with many considering that the elegant MGB was if anything improved with the addition of the coupe rear. With Pininfarina famously enlisted for the work, the conversion from roadster to coupe involved the pillars being reshaped to accommodate a higher screen. Like the Datsun, the MGB GT offered the practicality of a hatchback rear, but also managed to squeeze in a pair of rear seats. Yes, they’re tiny but they are big enough for small children and back in the day this was a deciding factor which allowed the family man to cling to his sports car dreams for a few more years… until the MG badge was replaced on the drive by a GTI one.

From the waist down, the GT was identical to the soft-topped MGB which meant the long-serving 1.8-litre B-Series motor which could never hope to equal the Datsun’s power… unless, that is you went for the short-lived MGC with its six-cylinder powerplant which was rated up there just shy of the 240Z at 145 bhp. The only snag of course was that the MGC had been discontinued in 1969, to be replaced by the MGB V8 in 1973. Offering 137bhp in production form from the ex-Buick V8, the MGB V8 was offered only in GT form and in many ways was the most convincing competitor to the Datsun the British industry was able to muster. 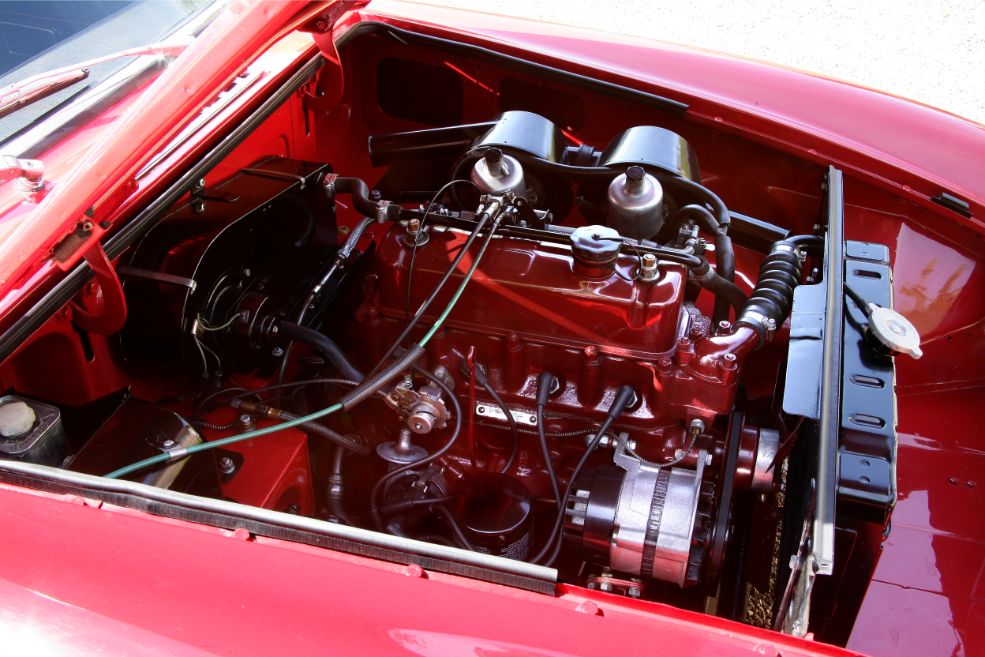 Despite the muscular powerplant though, the MGB feels its age compared to the Datsun, the suspension unable to cope with hard driving as well as the more sophisticated layout of the Datsun and the leaf-sprung rear tending to wallow in dips and potholes where the Z feels more poised.

As a classic though, the MGB starts to regain ground. The GT is not only most affordable of all the MGB models but even in rubber-bumpered guise it retains the charm of a ’60s classic while the Japanese car feels more modern than it really is. There’s also a distinct difference in the ownership experience in that the Japanese car may have been faultlessly reliable when new but they did tend to rot, which coupled with the low sales numbers means there are precious few left on UK roads – certainly in comparison to the huge numbers of MGB GTs running around.

This in turn means it’s harder to source parts, although not impossible – the 240Z did after all have a huge following in the USA which has ensured continued parts availability and UK specialists like the Z Farm are well served as a result.

Ultimately though, the cost of entry will be the decider for many: you’ll need a budget of at least £20,000 for a presentable 240Z, which is comparable to the MGC while an MGB GT is still yours for as little as £4000. As an alternative to the MGC GT though, the 240Z starts to make a really appealing proposition and even though I’ve always defended the unfairly maligned C, my choice would be the Datsun 240z every time: its blend of Seventies style and grunty performance makes it a no-brainer for somebody born in the same year. 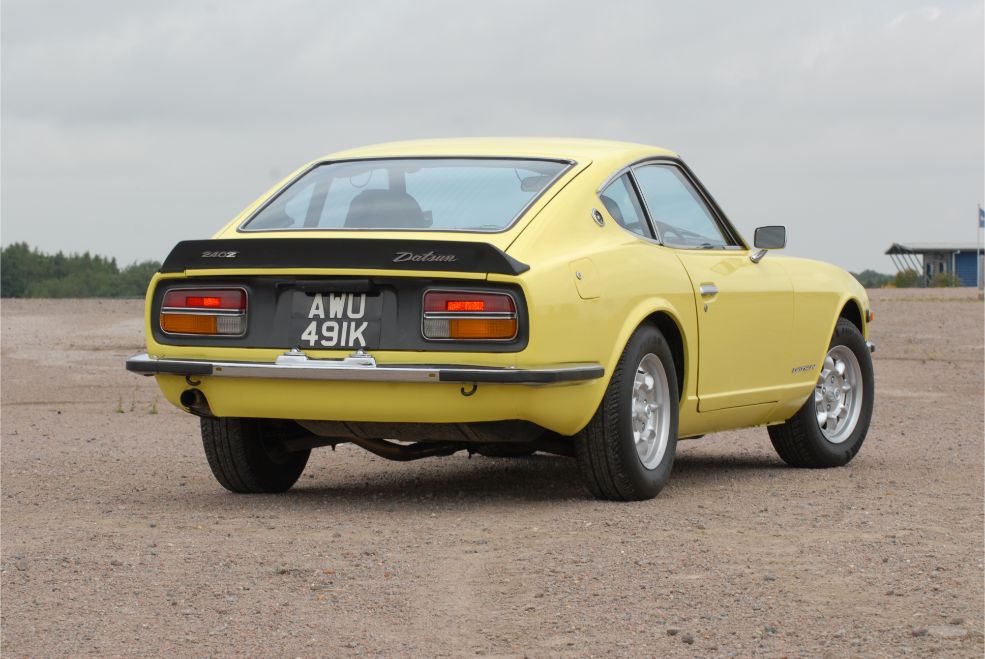