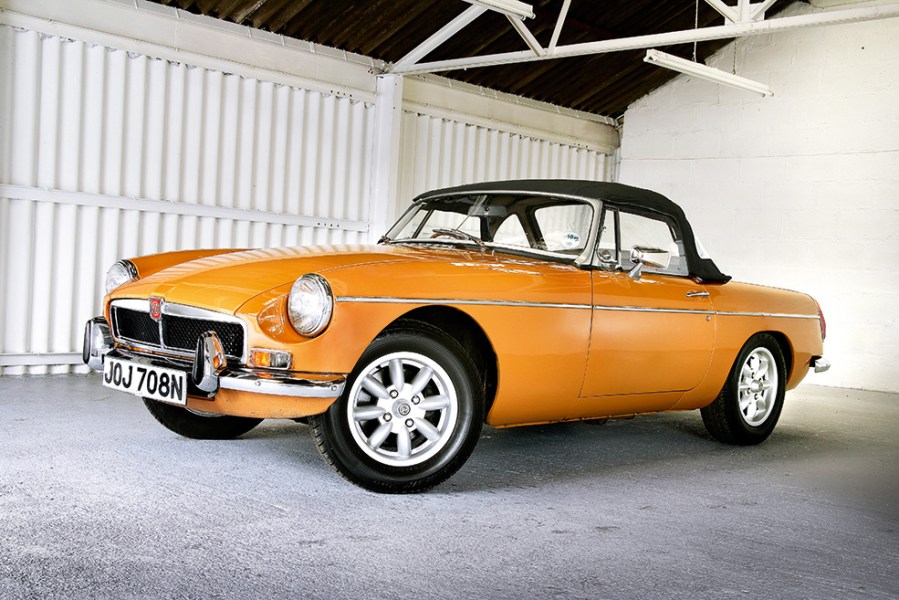 If you have read our MG Buyer’s Guide series , then you will have already covered the basic intro and mechanical spec in our MGB GT Buyer’s Guide. What follows here, is a guide through the bodywork woes of any MGB and some thoughts on the chrome bumper cars in particular; it really needs to be read together with the earlier section to get the whole picture.

The main problem area with any MGB is body rust as it was quite susceptible to corrosion. The MGB is a sports car with no additional support from a steel roof (even the GT’s roof has small screen pillars that don’t add much rigidity), so the condition of the sill structures and transmission tunnel are critical. Just picture the side profile with the doors removed – what is left is a large front section connected to a slightly smaller rear section by a thin bit in the middle, and that thin bit consists of the sills and transmission tunnel.

Corrosion below the level of the bottom of the doors is the main area of vulnerability, and it should be noted that while the only visible part of the outer sill is what you see under the door, it is in fact a much longer panel that is formed to run behind the front and rear wings, so that in position this panel runs from the front wheelarch to the rear wheelarch. This forms the outer half of a double box section, and the inside box can be seen inside the car running along the outside of each floor.

The base of this box can be seen underneath and is called the castle section, a description taken from the shape of the panel. If this panel doesn’t have the ‘castle rampart’ look all the way along, then this indicates the possibility of poorer quality cover-up repairs just to get an MoT without restoring the original structural strength of the car.

The twin box sill structures are created by a vertical diaphragm panel that closes off the inner box from the outer sill, and the problem with assessing this panel is that it is not visible. However, some indication of condition can be gained by probing through sill drain holes with a screwdriver to feel the vertical panel, assuming there is any of it left. Be aware that rusting problems in this area usually mean expensive restoration.

Not that this is the only area of rusting, although one bright spot is that the transmission tunnel is usually OK as the less-than-oiltight B-series engine will usually have soaked this area, and oily metal doesn’t rust. Unfortunately this oil spray doesn’t fan out far beyond the tunnel. Other areas vulnerable to rust include front under wing reinforcements as they have a ledge for mud to sit on. One great aftermarket product that arrived in the late 1970s were front plastic under wing liners that simply stop water and mud getting onto that ledge, into the sills and front lights and so largely preventing rusting in those areas. Today these are a cheap, simple and a highly recommended addition.

Additional corrosion is often found around the top sections of the outer edges of the rear wheelarches where the arch and wing meet, also in the rear sections of the integrated chassis legs where the rear spring swinging shackles mount, (exhaust heat can keep the left side drier and less rusty than the right).

Many other areas of an MGB can suffer corrosion as the original body steel was not well protected, although rare exceptions can be found such as late cars given the period Ziebart anti-rust treatment when new. It therefore follows that a detailed examination, ideally by someone familiar with the MGB structure, should be done to verify the body condition, and always assume that any rust bubbles you can see on the surface are signs of considerably more widespread corrosion below. 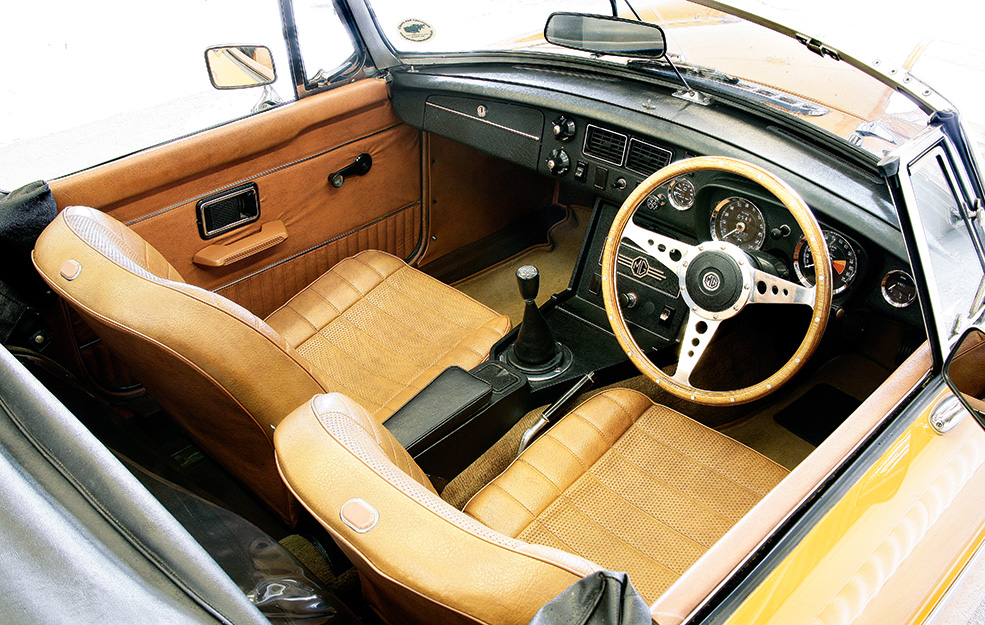 MGBs up to late 1969 were originally fitted with an alloy bonnet, later cars came with a steel panel. Steel bonnets can rust on the front, but this isn’t common and would usually indicate that there is some historical accident repair. Alloy bonnets are less susceptible to corrosion, but are more vulnerable to dents, especially the front raised plinth above the grille badge from careless pressure when shutting the bonnet.

Generally speaking, when examining the structural underside there should be some underbody compound protection. This should be a full coating, but not so thick that it blurs the definition of the panels below; excessively thick underbody coating that looks more like a generous dollop of icing on a cake raises the question of what it may be hiding!

Most cars today will have been rebuilt at least once in their life, but a rebuilt car that is not subsequently protected with wax injected into box sections and sprayed liberally underneath can see all the good work undone in just a few years. This brings to the fore the value of a comprehensive history file that should contain many images and documentary support for the work that has been done. You then only have to try and confirm that the history file is actually related to the car you are viewing – don’t laugh, it has been known for unscrupulous sellers to keep ‘spare’ histories to pull out when required.

Quite a few cars have been rebuilt using Heritage shells, which are brand new MGB bodyshells that continue to be manufactured on the original MG tooling by BMH Ltd (www.bmh-ltd.co.uk). These have always been expensive, but now use zinc coated steel for added rust protection and often a new body can actually be cheaper than rebuilding a very rusty original.

Paint condition is the next consideration after the structure, and repairing this is another labour intensive job (in other words expensive!) if any significant work is needed. Then the less costly brightwork (bumpers, grilles, air intake etc) needs to be considered, and here original chrome is usually better than modern replacements. Trim is another area where items can be quite costly, especially quality hoods and leather trim, although very much easier for an owner to change.

Turning now to specific chrome bumper car considerations, these all had two 6v batteries mounted behind the seats and either side of the propshaft in specific cradles. (The later rubber bumper cars had a traditional single 12v battery.) Many chrome bumper cars have been converted with a modern small saloon car 12v battery as these have the same square footprint as the original 6v. Unfortunately these usually have a battery reserve below 42Ah when original 6v batteries were 55Ah (and heavy duty options were 65Ah). Such a significant drop in reserve is not advised on the MGB with its heavy engine and power hungry starter.

Some MG specialists offer excellent conversions with two of these small 12v batteries wired in parallel, which then offers better reserve than the 6v originals. Other 12v conversions will be found using a more traditional oblong footprint 12v battery, and here safe, secure fitting and connection needs to be achieved, while the minimum battery Ah rate should be 50Ah or higher. MGOC Spares offer a current technology 50Ah single 12v conversion that is engineered to fit straight into a single 6v battery cradle and comes with all parts to make a safe, efficient conversion.

The very common 12v 063 battery is used in many 12v home conversions as in most cases it just squeezes into a single 6v battery cradle. With Ah ratings starting around 44Ah and running to around 53Ah, these can be OK and in most cases these rates do not give issues, but if you have a day when the engine is reluctant to start, then extended cranking can very quickly drain the lower rated batteries.

Hoods and frames changed in 1970 with the previous standard packaway design or optional grey folding frame types replaced by the more efficient and slightly more aerodynamic black folding frame design by Michelotti. The early and late designs can’t be mixed, but fitting a later hood with its frame to an early car or vice versa can be done.

The 1970s bright colours created something of a Marmite situation separating people into love or loathe it camps. The 1970 Leyland updates also included new ROstyle wheels, a recessed grille and vinyl seat covers. These were not well received, and so the 1973 model year saw a return to a more traditional chrome grille, but with black plastic eggbox moulded centre, along with different seat covers. One positive addition were fresh air vents fitted where earlier cars had their radio, with the radio migrating to a new centre console sitting on top of the transmission tunnel.

Before committing to buy any MGB, we advise a professional pre-purchase inspection, especially where you are not confident in your abilities. This will help to identify any issues, and more importantly put them in context of how difficult/costly repairs would be. 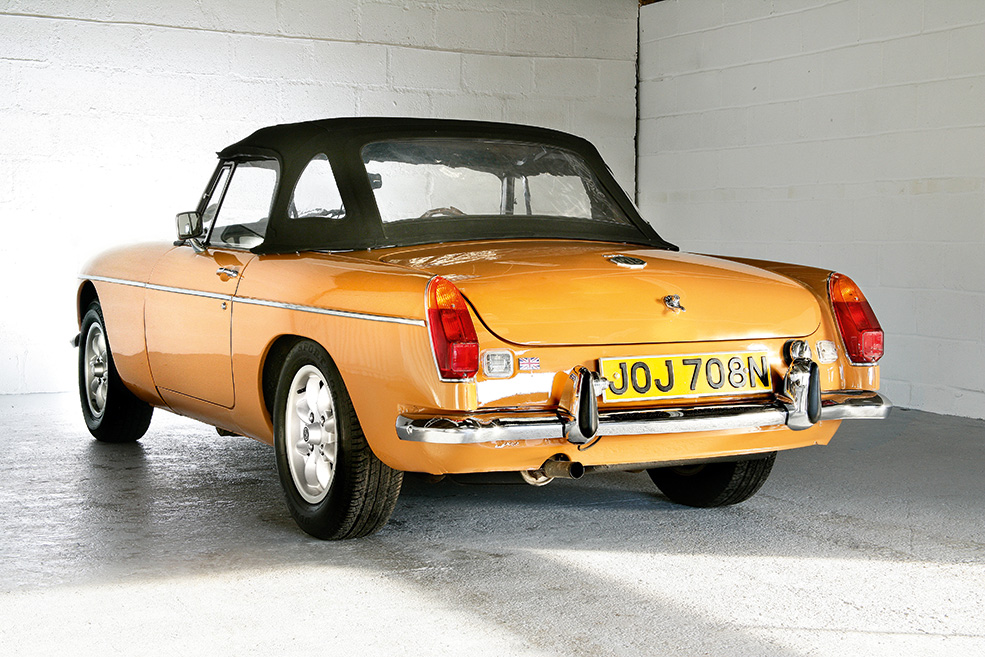 WHAT TO PAY?
Roadsters are worth 15%-25% more than a similar condition/age GT. Values vary primarily on condition, although age will have a bearing as the 1968/9 cars retained the original MGB look and so usually attract higher prices than the 1970-on cars, even though recessed grille Bs have become rare as so many owners changed the grille to earlier or later designs.

The range of prices asked for 1968-1974 chrome bumper cars will vary, but you can expect to get a very sound and useable Roadster for our budget of £7500. As values have been steadily climbing for some time, expect really good examples to be north of £10,000. Dealer prices start higher and can reach into the clouds, especially the closer to London the car is located. At the other end of values, there are cars that are attractively priced, but remember that buying a cheaper car to do up will usually cost more in the long run than buying a better car to start with.