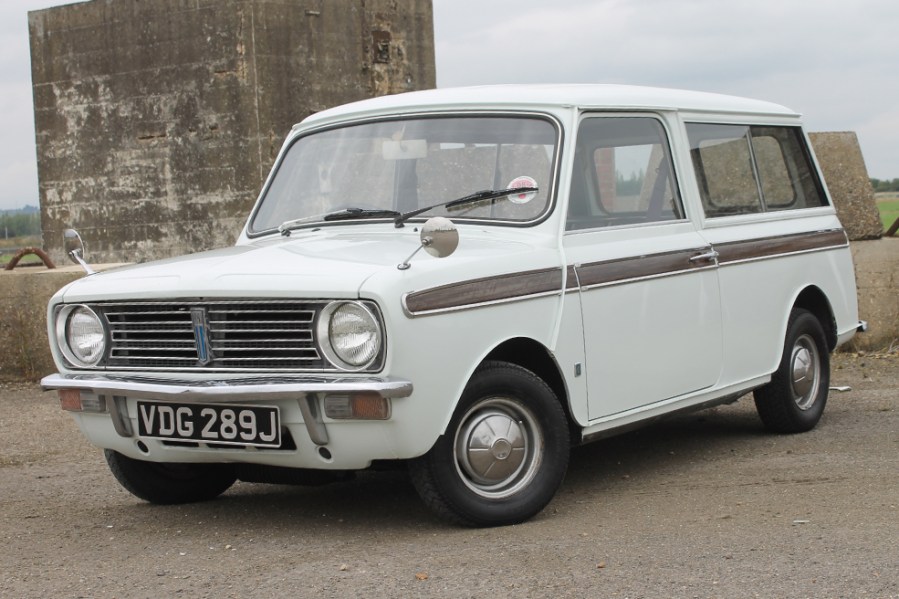 SUVs may have replaced the estate today, but there’s still nothing like a practical classic estate. We round up some favourites

There aren’t many classics that are truly practical. Not if you have children and pets; pushchairs and Labradors don’t exactly fit into that MGB. And if you want a regular use classic with a need for space, the ideal solution is a classic estate car. Better still, because so many were worked to death during bangerdom a typical classic estate will be far less common than the equivalent saloon variant. When did you last see a Cortina estate? And yet Lotus saloons are everywhere…

That doesn’t mean you have to be boring though. You don’t need to have a modern car if you have varied needs, with several 1960s and 1970s models offering the space and flexibility for family life. If you’re tempted, we’ve rounded up ten of the best classic carry-alls from the humble workhorse right through to a luxury treat or two. Whatever your tastes, we’ve satisfied them below.

British Leyland chose to replace the Riley Elf, Wolseley Hornet and the wooded Traveler/Countryman pairing in one fell swoop, with the Mini Clubman range of 1969. Even the Cooper wasn’t immune; the 1275GT replaced that and saved BL the royalties into the bargain.

With all posh Minis unified under one new face, BL was able to focus upon its corporate image. And the Clubman fulfilled that perfectly; with a Maxi-aping nose which would also be seen on the Marina of 1971. Clubman estate bought you mock wood appliqué, a new square nose, square dash binnacle in front of the driver, and plush vinyl seats. Later models even got a bigger 1098cc engine from the Allegro range, though they lost the fake wood in favour of a pair of snazzy stripes and some new hubcaps. For the last hurrah of the estate model, it gained a slightly new grille and dropped back to 998cc for the A+ in the run-out HL estate. By this point the estate was the last surviving Clubman in a range reduced by the launch of the Metro, and would itself be discontinued by 1982.

Buying a Clubman estate is fraught with the same pitfalls as any Mini, albeit with more space and better underbonnet access. Check thoroughy for corrosion, as these cars can and will rust anywhere. Floorpans, A panels and sills are known weaknesses, but in terms of body and trim almost everything can be sourced. 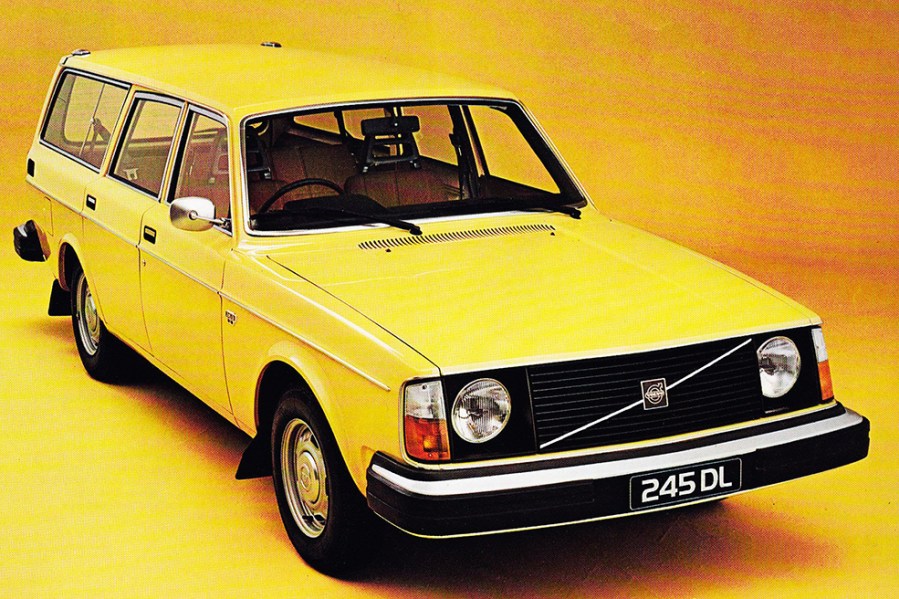 Yes, we know. The Volvo 240 isn’t just an obvious estate car, it’s the obvious estate car. Boxy but good, its resilient running gear and commodious carrying capacity have made it the default choice for decades of enthusiasts.

Launched in 1974, the 245 (as the estate was initially called) was developed from the outgoing 145 upon which it was based, and in common with the rest of the 200 range it shared the same shell as the 100 it replaced. From the front bulkhead back the cars were almost identical, but the 200 incorporated vast improvements in car safety with impact absorbing bumpers and crumplezones factored into the design. A new overhead cam engine family was also introduced; developed from the older B-series but vastly updated with improved performance and economy. MacPherson strut front suspension was also new.

Facelifted in 1979, 240s are simple cars to buy as they were developed for harsh terrain and all weather use. Check for rust, though post 1988 cars were partially galvanised. Early cars didn’t include plastic wing liners, so the front wings on pre 1977 examples will rot out. General engine bay corrosion needs checking, while any sill corrosion is worse than it looks. The sills are triple layered – and visible rot will probably mean the inner sill and strengthener have gone completely. Check for regular servicing too; many feel that because these cars are reliable they can be neglected. You’ll pay for that further down the line. 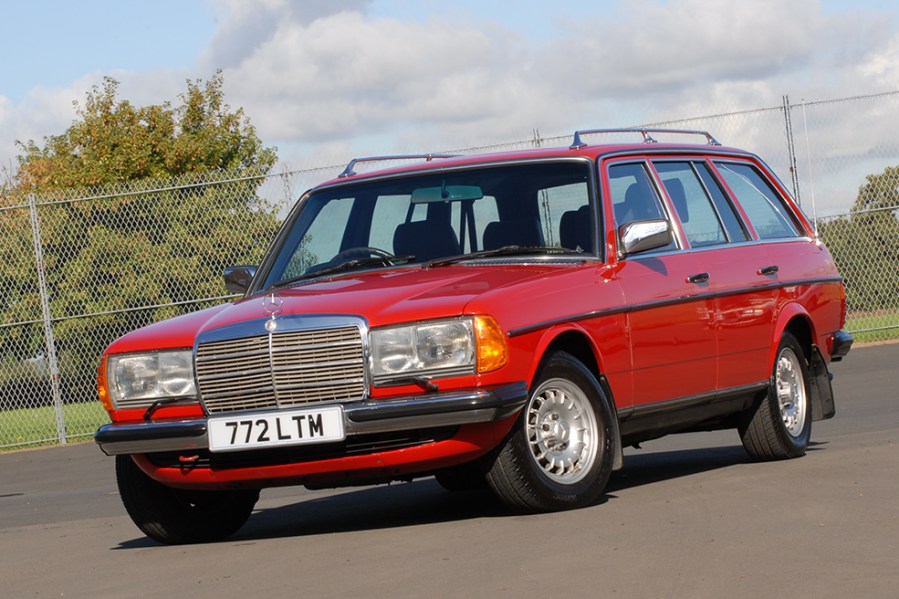 If the Volvo’s not for you, then try an example of the only car that will outlive it. The Mercedes W123 is a hero of the developing world; simple, large, handy and robust. Launched in 1976, the W123 was a replacement for the outgoing W114 and W115 ranges – unifiying four and six-cylinder models under one code. Over the following decade the range spanned 2.0 to 3.0 capacities in petrol and diesel formats, across three official body styles (saloon, estate and coupe) and even a convertible by Crayford. The estate – or T-model – actually had a different development code: S123.

Half a million miles was commonplace for the car which attracted a twelve month waiting list from day one. The S123 was Mercedes’ first in house estate model, launched in 1977 and with production starting formally in 1978. Previously, Mercedes Benzes had been converted by outside coachbuilders, and the popularity of its estates meant that the manufacturer wanted its share. All engines were available in the estate with the exception of the early 200, with a late 230E offering the best compromise between performance and economy.

While from 1980 the W123 gained generally good rust protection measures, tailgates do rot out, as do fuel tanks – the latter of which isn’t available new. Engines are bulletproof, as are gearboxes – though the manual is nowhere near as nice as the automatic. 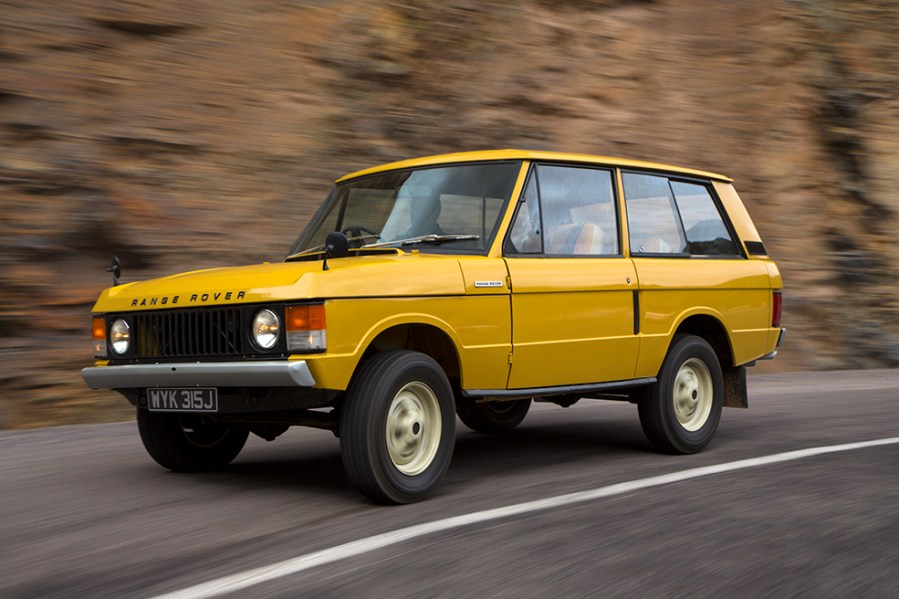 Not strictly an estate, but a multi-purpose vehicle in the truest sense – the Range Rover melded the go anywhere ability of the Land Rover with the comfort of a luxury saloon and space of an estate car. Launched in 1970 and still available in a largely unchanged format in 1995, the original Range Rover was one of few cars which had truly earned the title of icon.

The concept of a road-friendly Land Rover had its genesis in the Road Rover project of the 1950s – and before that, the Land Rover Tickford Station Wagon. Developed on a new 100” wheelbase, the Range Rover used coil springs and the Rover V8 to offer a more car like experience than the Series Land Rover, something a gentleman farmer might use on the land and then to take his family into town of an evening. The idea took off, and over time became more focused on road luxury and less on utility. It was still a capable off road machine, but now it was also a credible alternative to a Jaguar XJ. By the end of production it had earned such a reputation that Land Rover kept building it alongside its successor for fear that clientele wouldn’t want the new model.

Check the boot floor and the chassis for rust, these are two of the biggest and most expensive places it can let go. Fortunately many of the outer panels are aluminium so won’t rot, but check for galvanic corrosion around their mountings. 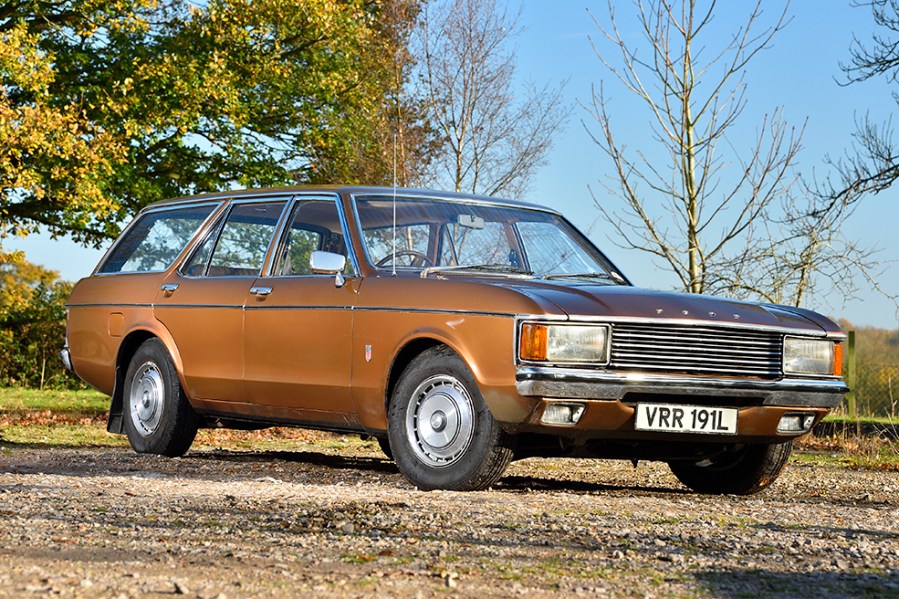 The Sweeney might not have had any dinner, but had they had a Granada estate in place of the Consul GT they would have had space to fit packed lunches for the whole Met. The Granada estate was Ford’s first in-house large estate, following the success of Abbot conversions to the outgoing Zephyr and Zodiac ranges. Available both as a low-spec Consul and a more plush Granada GXL, the Granada estate range expanded when the Consul was subsumed into the Granada range for 1975. While the rest of the Granada range was replaced by the Mk2 in 1977, the estate carried on – yes it had a new nose and new engines, but it retained the Mk1 estate shell.

Front wings, headlamp surrounds and the front valance are all common rust spots, while the mechanicals are broadly hardy. A good gearbox and good suspension are mated to Essex V6 and Pinto fours, both of which have excellent spares availability. However, be wary of early 2.0 examples with the V4 engine – it’s coarse, and the spares situation is nowhere near as rosy as for the other engines. We’d advise a V6, in 3.0 form. 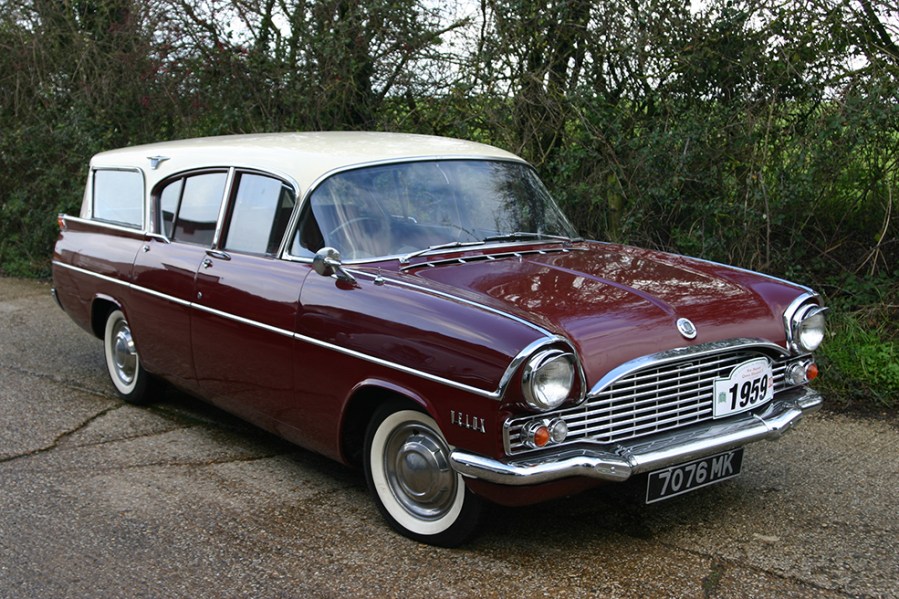 The best person to judge an estate is someone with an estate, right? And the estate favoured by Her Majesty Queen Elizabeth was always a large six cylinder Vauxhall. The private plate bought for her by Prince Philip as a joke, MYT1, is best known for having adorned a series of converted Vauxhall Crestas.

The last of those was a PC Cresta, a conversion executed by Martin Walter. The cars had a 3.3-litre straight six, and space for 101 corgis should Her Majesty so desire. All were based on the Deluxe model, and at £1507 were £430 more expensive than the standard saloon. This bought more metalwork and uprated rear suspension, to say nothing of the cigarette lighter and the heater. Vauxhall management liked the conversion so much that the PC estate was sold through dealerships as a factory approved model. Once the Cresta was discontinued Vauxhall’s biggest estate was the in house Victor 3300SL, though Vauxhall did produce a single Viceroy estate for the Queen at the end of the 1970s. Buying a Cresta today will be difficult, not least because of how few were converted. Most minor trim items are no longer available, while you’ll spend time looking even for big items like panelwork. When you find one, make sure that the bodywork is good – there’s a lot of metal here, and it all rusts quite merrily. 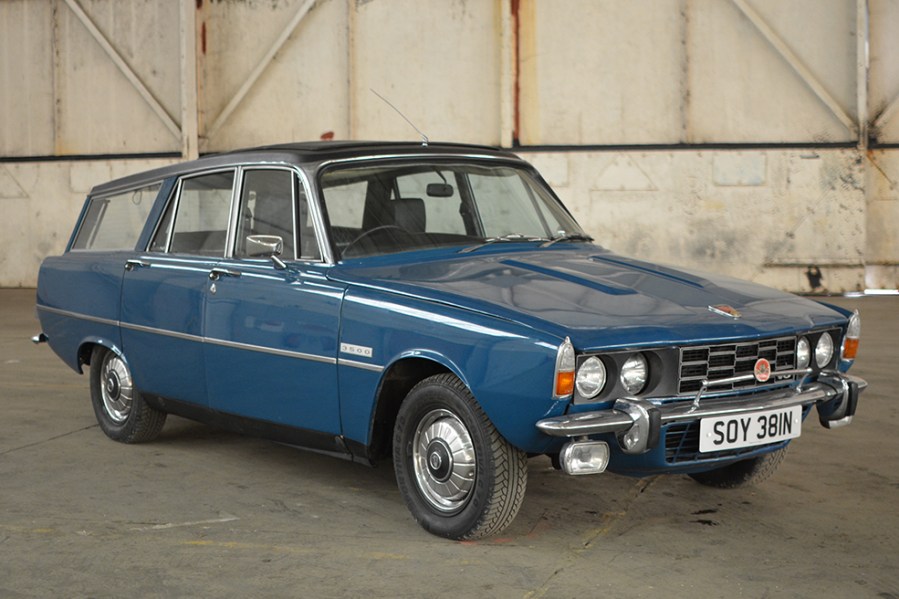 Like the Vauxhall, this is strictly a conversion rather than a factory estate. But because of the way the P6 shell is contructed it’s possible to convert any saloon to an Estoura if you have the bits. A rotten base unit need not therefore condemn an Estoura, if there’s a good donor car available. In fact, FLM Panelcraft would offer the conversion to used cars as well as new ones in period. Battersea-based Panelcraft built the cars, which were then trimmed by Crayford, Hurst Park Motors or HR Owen, and sold exclusively via the latter from 1970. 160 were built in total, the majority based on V8 models, though some four-cylinder Estouras do exist.

As the Estoura bits can be swapped, the majority of buying tips need to centre on the P6 underneath. This means that the primary concern is the condition of the base unit. Check under the rear seats (which lift out), as corrosion here can signal worse where you can’t see it. Check also the sills and the front bulkhead; the latter of which is a key structural area and braces the front suspension. Make sure none of the doors have dropped, either. Mechanically, rear brakes and the handbrake in particular can seize, and many are afraid of working on them as they’re inboard discs. It’s simple, just unconventional. Remember that a ropey Estoura can be restored using a good saloon as a base. 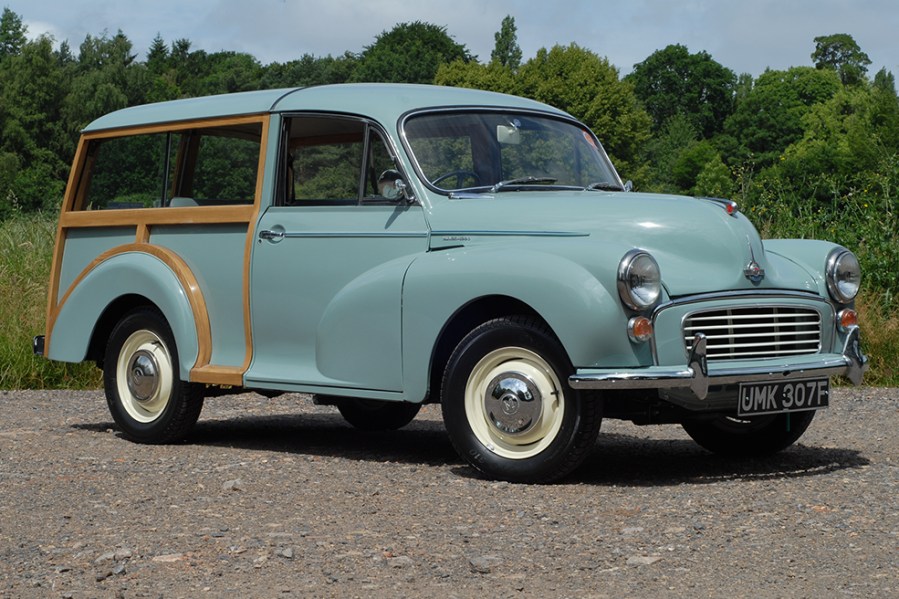 The Morris Traveller is the most obvious choice on our list, which is why we’ve saved it for last. It seems hard to believe that the model survived into the 1970s, with its anachronistic ash frame and sit up and beg styling. That ash is structural incidentally, so ensure it’s in good condition should you choose to buy. Built in the traditional manner as only continued by Morris at this time, the Minor Traveller and its subsequent Minor 1000 Traveller stablemate followed the same basic formula as larger Morris estates of the era. Looking like a shrunken Oxford Traveller when launched, as part of the Minor range it went on to become one of Britain’s best selling and best loved car ranges.

Today, that’s still the case owing to the thousands of Morris enthusiasts out there. The club is active, both for traditional Morris customers and for younger members, and parts are cheap and easy to source to boot.

If you let the wood rot, the structural integrity of your Morris is severely compromised. You can get replacement wood kits, but this is a job we’d leave to the professionals rather than attempting it at home. Everything else is DIY friendly, from trim to major engine rebuilds.