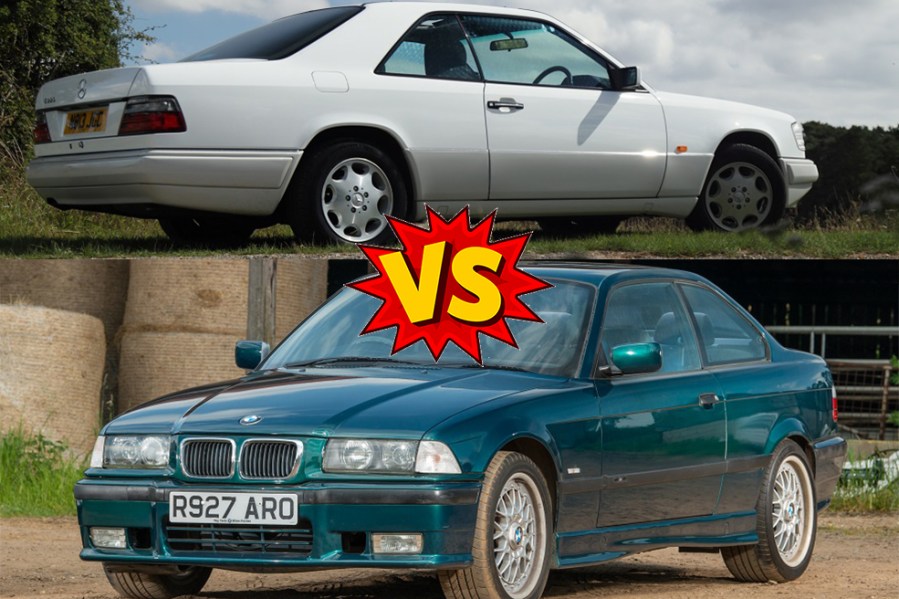 The ’90s saw BMW raising its game to Mercedes levels. How do their coupes of the time stack up as modern classics today? We pitch the BMW E36 against the Mercedes C124.

The third-generation 3-Series, dubbed E36 in BMW speak, is one of those cars which still survives in significant numbers in everyday use, owners simply never having replaced them because they haven’t yet worn out. 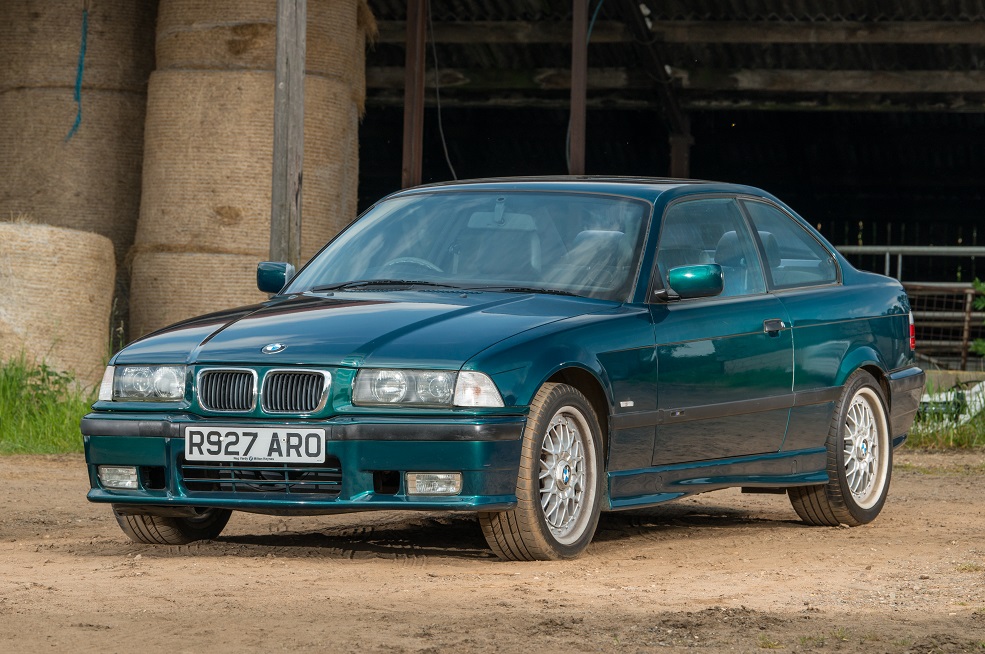 Perhaps they may be less common here in the UK then they were say five years ago, but travel to southern Europe and they’re still a relatively common sight. Indeed, a nice 328i convertible cruising down the seafront on the Côte d’Azur still looks every bit the classy, elegant design it was when it first appeared in 1990. Its short overhangs proudly trumpet its rear-drive status, while its tautly muscled lines – the work of Pinky Lai who would later give us the Porsche Boxster – look just as good on a pumped-up M3 as they do on a basic 316i.

It’s fair to say that the BMW E36 generation moved the game on significantly even by BMW standards and it certainly made the previous generation, the E30 look like a fancy Cortina in its mechanical make-up. An all-new design, the E36 ushered in a new age of electronic complexity and also debuted BMW’s clever multi-linked ‘Z-axle’ rear end which did away with the sometimes tricky handling of the older semi-trailing arm design.

Unlike the previous generation, the E36 range was planned from the start to include saloon, estate and convertible models, with the Touring (estate) noticeably neater than the previous model. The M3 was also a mainstream model and stepped up from its rough-and-ready homologation special status to a sophisticated grand touring sports car with refined six-cylinder power and the option of four doors. Critics may have complained that it was less raw and involving than the previous M3 but it was decisively faster in almost every way. 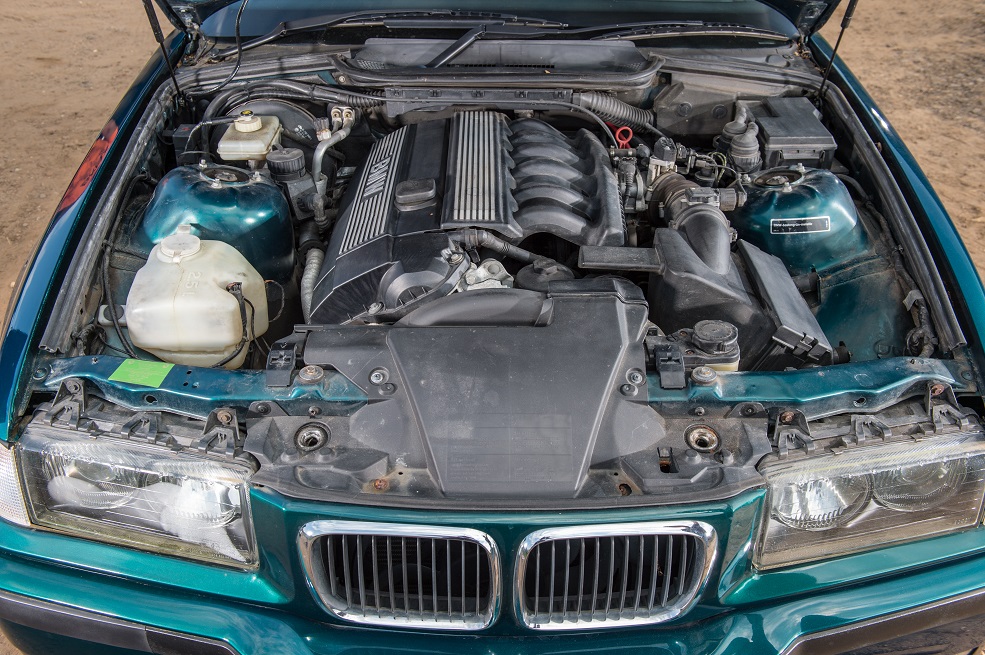 In 1993, BMW dipped its toe in the UK diesel market for the first time, with a pair of smooth straight-six diesels, the 115bhp 325td and intercooled 143bhp 325tds. The car received a facelift in 1996, recognised by the fatter grille ‘kidneys’ and in 1998 production was wound down for its replacement by the E46 generation, although the Convertible and Touring would continue into early 2000. 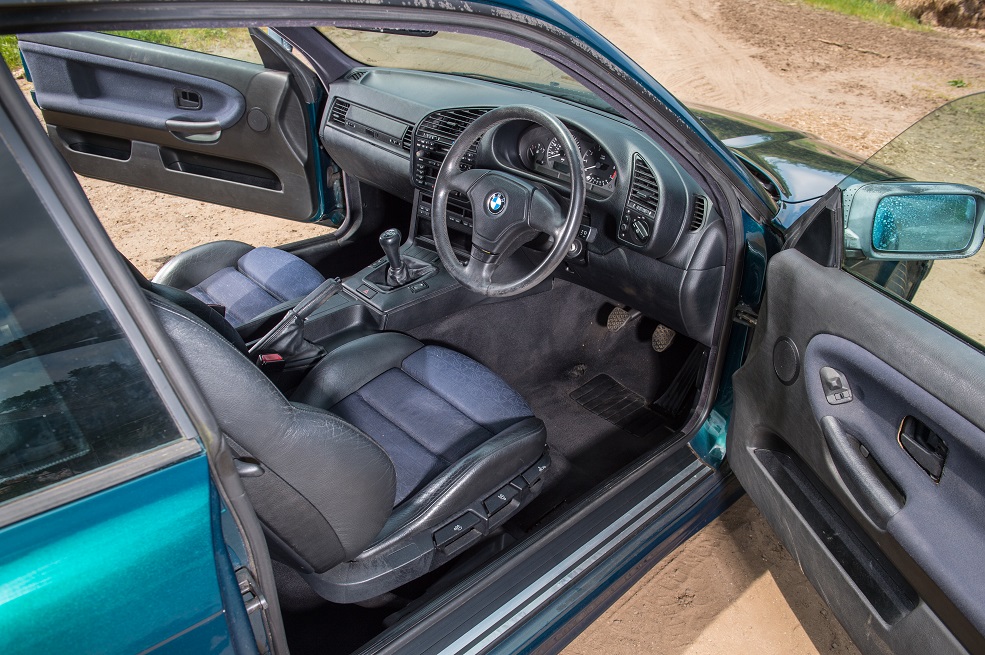 The big model range means there are plenty to choose from, but the four-cylinder cars once so popular as company wheels are somewhat lacklustre as a fun classic today. At the other end of the scale, the M3 offers searing performance but comes with higher running costs, meaning the smart choice is the mid-range six-cylinder cars. Of these, the 320i is pleasant if best described as brisk rather than quick, while the 323i is somewhat breathless despite its advertised 170bhp. They need working hard to extract the power and even in manual form can be frustrating, leaving either the early 325i or the later 328i. Of these, the 325i being the older car is relatively rare, leaving by a process of elimination the 328i as a winner.

As for manual or automatic that’s a personal choice but suffice to say the ZF automatic in the E36 is a smooth and well-proven unit which suits the engine well. A nicely-specified 328i Coupe in a nice colour and sitting on a nice set of wheels – preferably BMW but AC Schnitzer, Hartge or of course Alpina work well – still looks impressive and will always get an appreciative nod from car people. That is, as long as you haven’t succumbed to the once-popular trend for plastering it with M3-lookalike bits…

Compared to the Mercedes, the BMW is very much the driver’s car; smaller, lighter and an order of magnitude more nimble it lives up to the old ‘ultimate driving machine’ tag and makes the Mercedes E-Class coupe feel like a big boat in comparison. 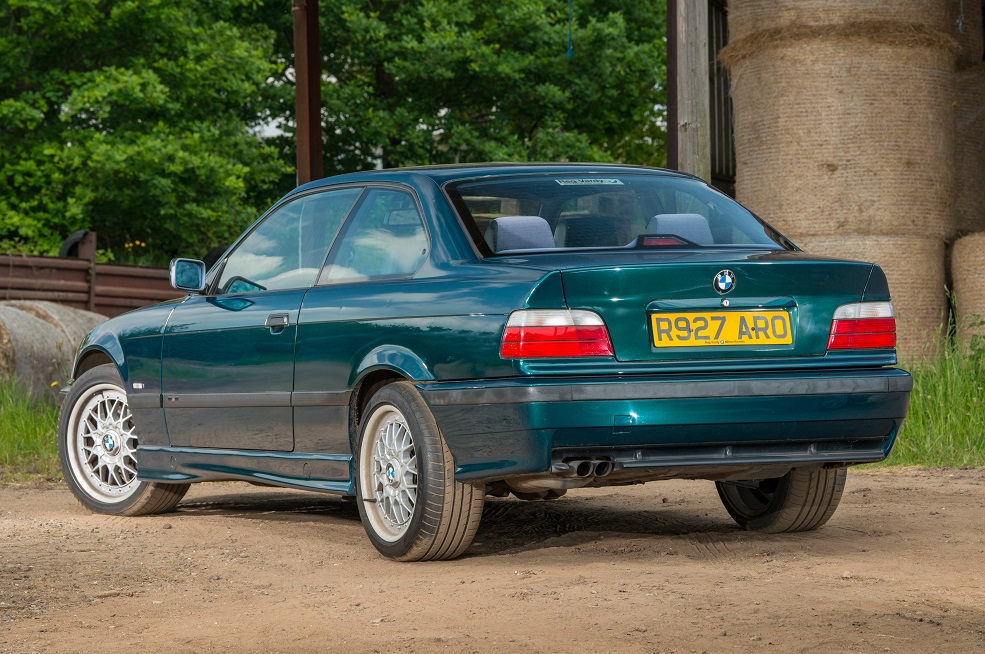 As for owning them, the E36 is compact enough to work on in a single garage and parts supply is still incredibly good, with service parts available off the shelf from the usual German parts suppliers. If you can’t get the odd trim detail from a specialist dismantler, then BMW itself can supply everything you might need, albeit it at a price.

For me, there’s no hesitating: the Mercedes seems somehow anonymous next to the BMW and the only choice comes down to whether you go for the convertible or coupe. Both are full four-seaters and a nice example of either is already proving to be a wise investment. 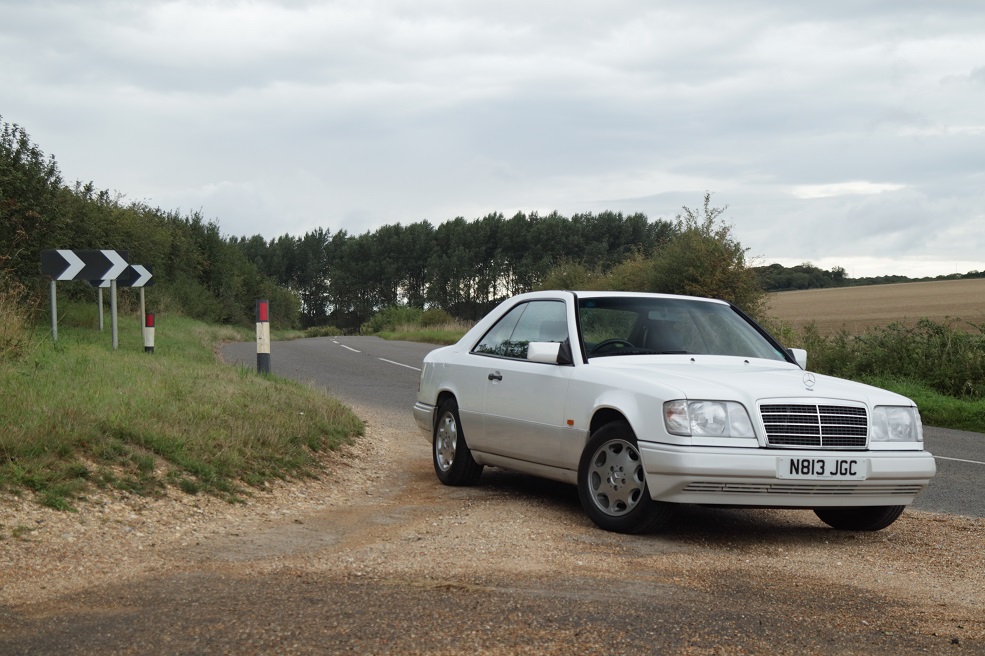 The way that BMW E36 prices have been going, it does seem fairer to compare it not to the CLK that came out in 1997, but instead the Mercedes C124 coupe that is an established modern classic. In fact, in this case it’s the Mercedes-Benz that looks like the expensive one but there are some good reasons for this. One is that it’s older: having come out in 1988 it pre-dates the E36 by four years, and when the last were built in 1996, the E36 coupe had three more years to go. The other is that the C124 is the last of the Bruno Sacco-designed coupes that began with the classic C114 and iconic C123.

As Paul will have already mentioned, for the price of an E220 like we have here, you could buy into the best of the 328i Sport models or even approach an M3, so what’s the value in the less powerful four-cylinder Mercedes coupe? Well for starters, it is of the class above, being based on the medium-sized W124, and although it does have a shortened wheelbase by 3.3 inches, the coupe is actually heavier than the saloon by 30kg, something which alludes to the C124’s top talent: refinement. The extra weight is down to extra chassis strengthening to help accommodate the pillarless windows, and in fact Mercedes even fitted the coupes with extra sound insulation to bring them up to an overall higher refinement standard than the already impressive W124 saloons. Clever seals on the frameless windows keep wind noise down to a hardly noticeable rustle, and in fact it’s so quiet that you barely hear the passing by traffic from outside. 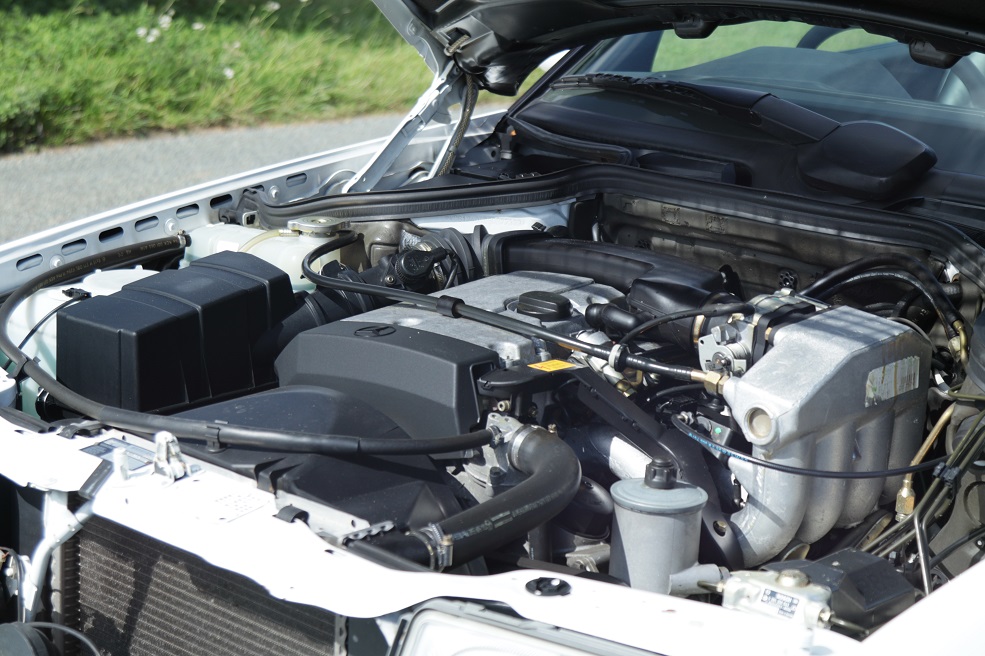 While the BMW is well built, the Mercedes C124 sets an even higher standard. The doors close with a great, damped clunk and even the boot lid would put some car doors to shame. Inside there’s additional trim, walnut veneer, leather seats, electric windows, and an electric assistant for your seatbelt. The C124s were always better equipped than their W124 relatives, unsurprisingly given the huge cost premium when new (in 1988, a new 230CE was £23,800, while a 230E saloon was £17,600). The rear seats don’t offer huge amounts of legroom but they are shaped just like the front ones, and the rear passengers have their own electric window controls, foldable arm-rest and even a little cubby hole under a padded section in the middle.

On the move, the Mercedes C124 is so quiet and comfortable that even four adults would be happy to travel quite some way. For two people, the appetite for miles could go on forever and, what’s more, it has the cavernous boot space to keep up. 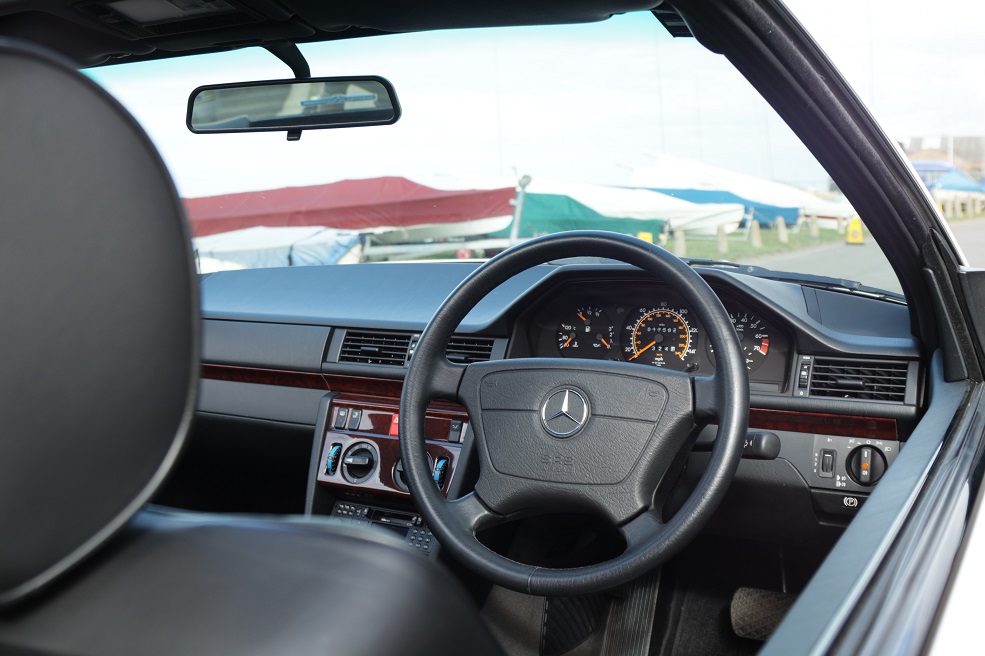 That’s not to say that it can’t get a move on. The chassis is all W124, which means MacPherson strut front and sophisticated multi-link rear suspension, and it provides the C124 with superb control up to seriously high speeds. The setup was first seen in the W201 but for the bigger W124 and C124 Mercedes used revised bushings and links to further improve rolling refinement. Three engine types were available in the coupe, at first a 2.3-litre four cylinder and three six-cylinders: two 3-litre engines with 12-valve or 24-valve heads, and then a fire-breathing 3.6-litre unit in the Mercedes E36 AMG.

After the facelift in 1993, the four-cylinder was replaced by a new 2.2-litre, 16-valve unit, codenamed the M111. It featured more torque and improved fuel economy thanks to Siemens engine management. Meanwhile, the six-cylinder options were reduced to just two, a 24-valve 3.2-litre and the 3.6-litre E36 AMG.

Naturally it’s been the six-cylinder models that have led the rise in values over the last 10-15 years, and they are very nice. Exceptionally smooth and remarkably strong performers particularly in 24-valve form, they are justifiably pushing the best examples up beyond the £10,000 mark. However, the four-cylinders are smoother than you’d think, and there’s still plenty of torque to bring you up to speed without even going past 2500rpm. If you do push the revs, you will find plenty of reserve power for overtaking. 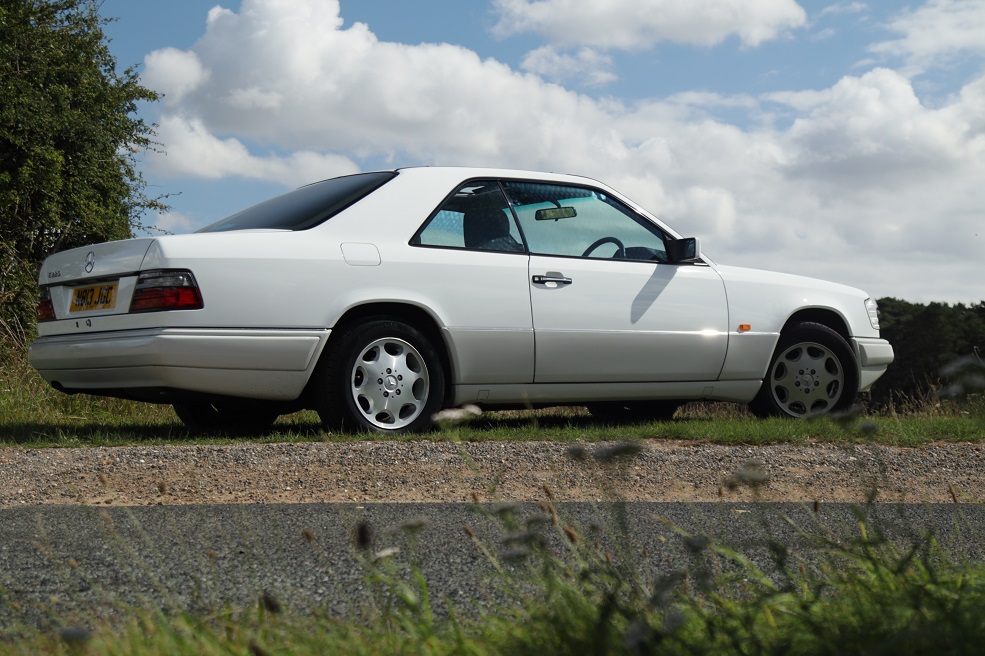 They also offer better fuel economy, up and above 30mpg. For some, they may be the preferable option, not just for the fact that they’re up to 50 per cent cheaper than the six-cylinder cars. It’s still possible to get a nice Mercedes 230CE or last-of-the-line E220 coupe for £4000, with projects for even less.

The Mercedes C124 is the more expensive option here but consider it as a cheaper alternative to an SL, as well as being a car significant to Mercedes-Benz history, and it does make sense. It offers refinement levels a Rolls-Royce owner would be happy with, and road holding enough to keep up with the BMW E36. The design is timeless, perhaps more so than the BMW, and on closer inspection the finish is at another level. For me, it’s worth the extra cost, not just because it’s likely to be a stronger investment too.

You can check out our review of the Mercedes C124 Coupé below: