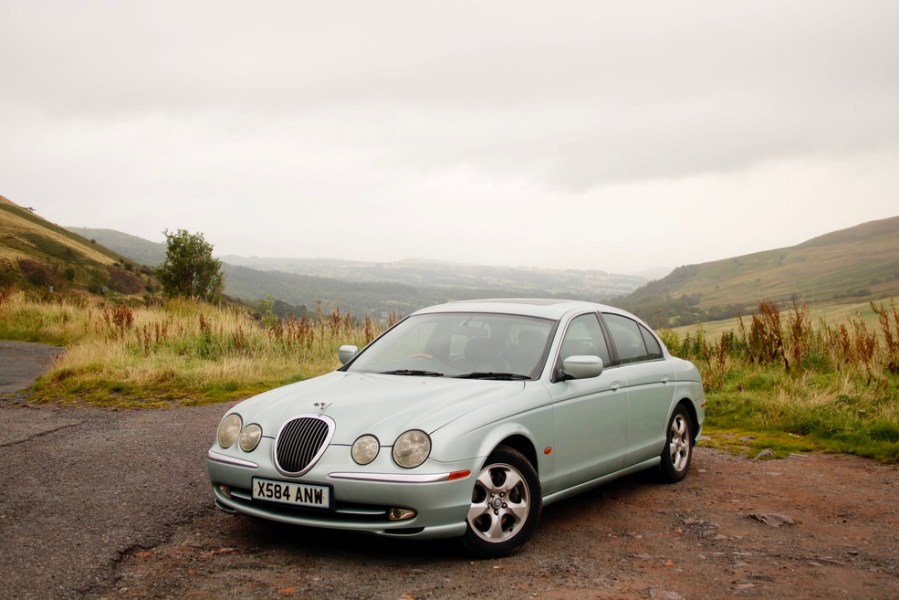 The Birmingham Motor Show in 1998 was one of the most important ever, with major launches of  four important British-built cars. They were the Rover 75, Land Rover Discovery 2, Vauxhall Astra and Jaguar S-Type, each one a critically important model in its own right.

Jaguar made sure it got its fair share of the available column inches with a spectacular reveal ceremony, where the new S-Type was revealed on a raised plinth in front of a giant leaper hologram, flanked on both sides by over 50 separate video screens, each showing images of the new car and its predecessors.  There was no mistaking the fact that the company was playing on its rich heritage to seed the car in the minds of potential customers.

The live launch was broadcast by satellite as far afield as Sydney, Tokyo, Berlin and Paris, which, back in the days before we were all signed up to the world wide web, was seen as an achievement in itself. Over 10,000 people across the globe watched the reveal. Small fry when you see the number of hits on YouTube that people get for simply falling over, but back then, this was big data.

Of far more significance, though, was Jaguar’s range expansion, on the back of then-owner Ford’s recognition that focusing on just luxury and sports car niches was not a sustainable business model. Indeed, in many respects, the S-Type was the car that set Jaguar off on its current trajectory, where it has its widest model range ever.

The first car in the company’s sights was the BMW 5-Series, which had recently set a new benchmark in the executive car class with the launch of the E39 model. 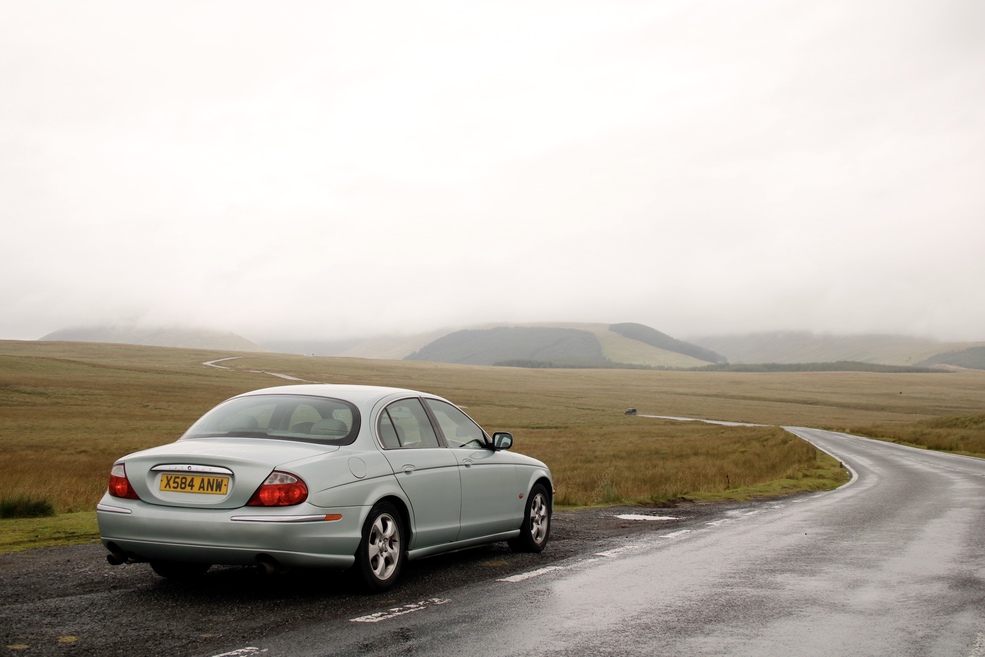 Speaking at the car’s launch, the S-Type’s Project Engineer, Dave Szczupak, was unapologetic about trying to home in on the German brand’s core territory.

“The BMW was, dynamically, the benchmark,” he said. “But we didn’t want it to be the same as the 5-Series, which [was] the best car in the sector. We tried to create a car that is subtly different, that is truly a small Jaguar. The difference is in the rolling feel, in trying to get the balance between ride and handling, getting a little more of that Jaguar plushness into the mix.”

The challenge was made tougher by the fact that the S-Type shared much of its architecture with the Lincoln LS, built for the US market and with less of a demand or focus on noise, vibration and harshness. The US-sourced architecture also made it one of the lightest cars in its class – great for performance, but not for refinement.

“Getting the Jaguar ride comfort and refinement was the biggest challenge,” said Szczupak. “It’s the part of engineering that needed the most iterations, as it touches so much of the car – the body stiffness, the spring rates, and then you get into the steering feel. The rolling feel was our toughest challenge, ahead of refinement. For that we had to work with Bilstein, which supplied the dampers, and the bush suppliers. We carried out a full NVH analysis to measure frequencies and ensure that the Jaguar ‘feel’ was there. Every Friday morning at 7.30am, we had a meeting just to see where we were on refinement alone.”

Szczupak’s enthusiasm counters any criticisms that doubters had about the S-Type being built to a budget, as merely a dressed-up Ford – something that the more negative commentators in the media were keen to drive home. Driven back-to-back with its Lincoln equivalent, however, the Jaguar was a much superior car. It was also difficult to relate to the rather staid and squared-off American sedan with which it shared its powertrain and floorpan, thanks to its truly unique styling. 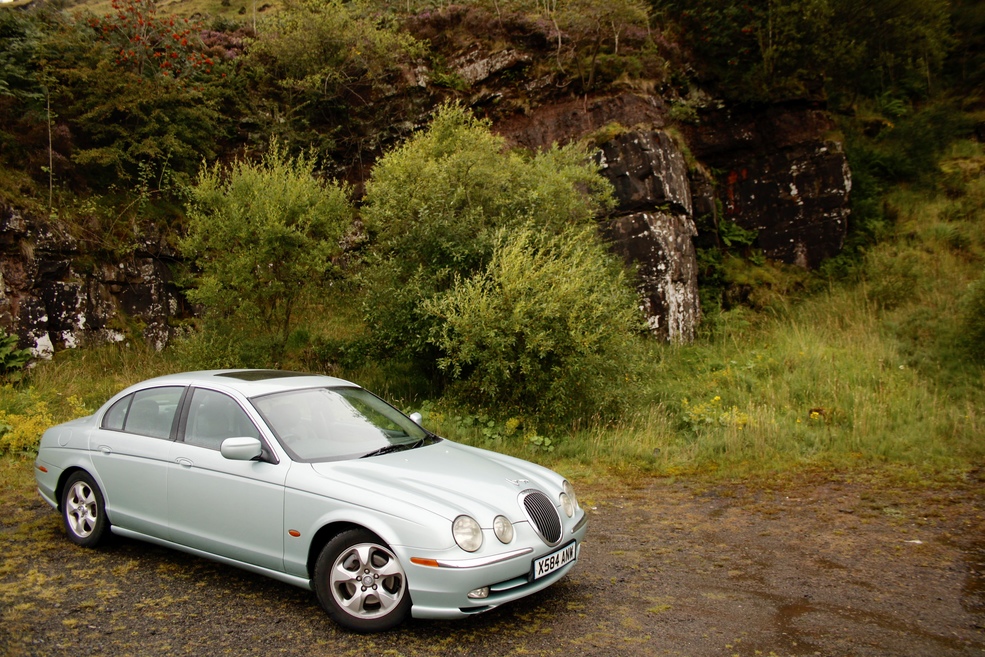 Indeed, reaching a decision on the S-Type’s looks was the cause of some consternation within Jaguar at the time. Working with internal design teams, Jaguar’s late Chief Designer, Geoff Lawson, presented four design concepts. One was effectively a scaled-down XJ (and looked uncannily like the X-Type that followed), another had more of an American-theme to present a ‘bold new face’, the third used front and rear end treatment that was reminiscent of the XK sports car (alleged to be Lawson’s favourite, but viewed internally as too radical) and the fourth, known as ‘Neo-Classic’ was unashamedly retro.

It was this final iteration that proved most popular within Jaguar, with a profile that echoed the silhouette of the Mk2, quadruple fluted headlights and an oval grille that gave it a distinctive family face.

“The Mk 2 was a beautiful car and was distinctively Jaguar,” said Lawson at the car’s reveal. “We’d have been dumb to ignore it. That face is ours. It’s in Jaguar’s portfolio, so why throw it away?”

The fact that the car was very different in size, concept and styling to the XJ was a concern for some, but these fears were quickly assuaged in customer clinics, where 85 per cent of executive car buyers instantly recognised the S-Type as a Jaguar, whilst among the same group of subjects only eight per cent recognised the W210 E-Class as a Mercedes-Benz.

Jaguar’s top brass were ambivalent about what the S-Type’s styling would mean to customers, though, recognising from the outset that the unashamedly retro appearance might put some people off – after all, the new 5-Series may have been the S-Type’s benchmark, but it was also a much more modern, progressive design.

Speaking to Autocar in 1998, Jaguar’s then Marketing Director, Phil Cazaly, was unapologetic. “Jaguars are bought for their styling,” he said. “It’s why even when things were not so good within the company, back in the 1980s when quality was not what it should have been, customers still kept their loyalty to Jaguar and kept coming back. 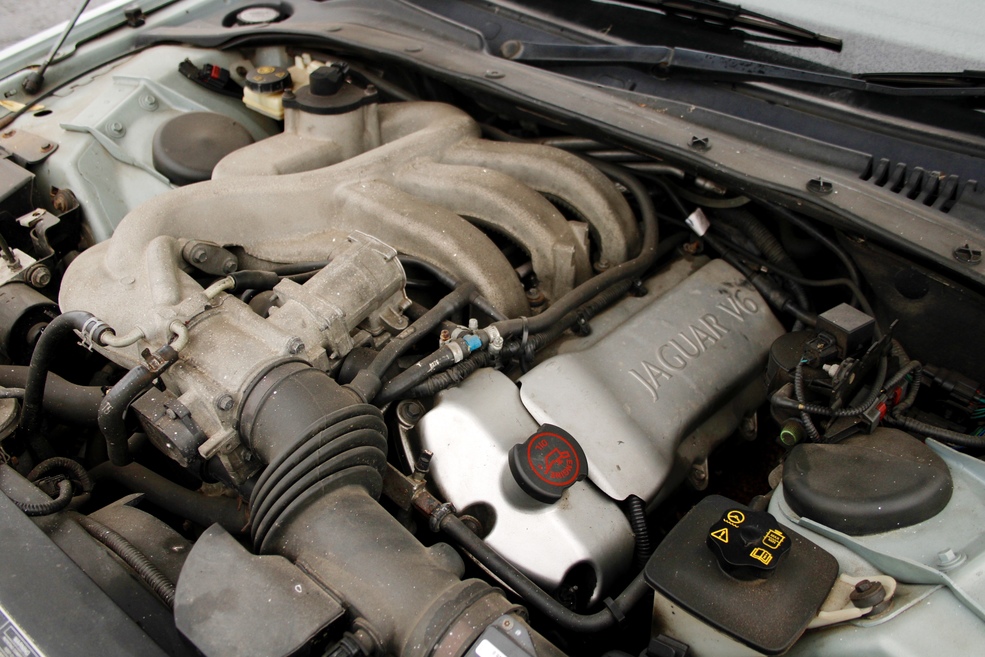 “The new car won’t be for everyone, but we’re trying to attract a new kind of person to Jaguar, someone who will still be greatly attracted by the car’s styling, but who has possibly said no to an XJ-Series car. The desire to find new customers, ones that may not have considered a Jaguar before, influences greatly how we market and advertise the S-Type.”

According to Cazaly, there were six key details that were critical at the time of the car’s launch: styling, a ‘car-dominant’ image, a focus on detail, a powerful name, a link with nature, and a clear but low-key link to the past, though in fairness the links to days gone by weren’t that subtle at the reveal, nor in the car’s advertising, in which the Mk 2 and original S-Type featured heavily.

Jaguar’s Chief Executive, Nick Scheele, was equally keen to reference the company’s past glories at the time of the car’s reveal, saying: “The S-Type signals the dawn of a new era in the history of Jaguar. The start of a dramatic product-led expansion over the next four years, which will attract a new generation of buyers to the Jaguar marque. At the same time, it draws on a proud tradition of Jaguar sports saloons, harking back to the S-Type and Mark 2 saloons of the 1960s.”

Jaguar’s focus on the car’s distinctively retro exterior appearance detracted partly from the one area of the car that failed to ignite the passions of media pundits, namely the cabin.

Whether costs needed to be cut, or Jaguar was tying too hard to be avantgarde, the interior failed to match the ornate and agile appearance of the exterior, with a steeply angled dash, a smaller amount of wood and a large, plasticky steering wheel. In fairness, it actually looked better from behind the wheel than it did in pictures, and certain elements, such as the rather clumsy looking centre console storage drawer, were far more ergonomic than they first appeared – but it polarised opinion and the cabin was redesigned to echo the look of that of the new XJ when it was revised in 2002. 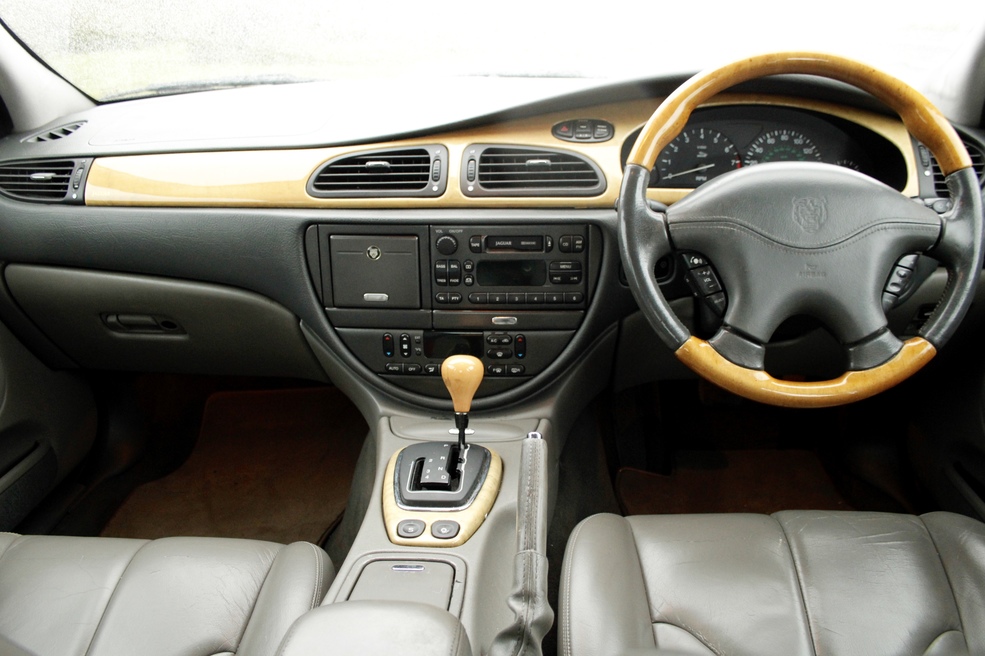 Otherwise, the car was well received. It came with a choice of 3.0-litre V6 and 4.0-litre V8 petrol engines, the latter based on the same unit, but with an additional bank of cylinders, with performance and refinement being the key to their appeal, while the ride and handling were sublime, as was always the way with a Jaguar saloon.

Indeed, at the time of the car’s launch, Jaguar’s legendary Chief Chassis Engineer, Mike Cross, was at pains to talk about how thoroughly developed the car was.

“We reckon that if we can get a car to work properly in Scotland, Wales, England, Germany, Australia and Detroit, it’ll work pretty well anywhere in the world,” he said. But why Detroit? Apparently, the Michigan city’s crazed and potholed roads were rutted and ruined, and companies such as Jaguar’s parent, Ford, had asked the local authorities to not try too hard to repair them, as they were perfect for testing ride quality.

Cross was also extremely open about benchmarking BMW to ensure the S-Type was as good as it could be. He told Autocar, “In my opinion, the BMW 5-Series, in the form of the 528i, is the absolute best car in the world. We realised pretty early on that it was the one to beat, and we’ve done everything we can to make the S-Type even better.” 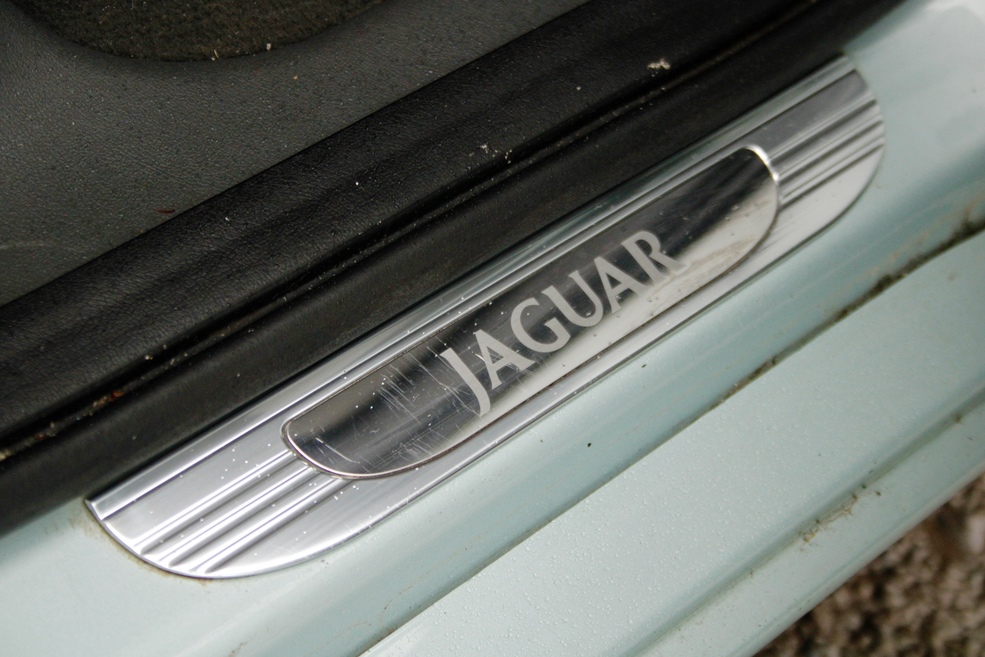 Drive the two cars back-to-back today and the comparisons are as interesting now as they were back then – both have aged gracefully in terms of their refinement and handling, but while the BMW exudes an air of firm solidity, the Jaguar S-Type is the more graceful and fluid to drive. It may not have the on-the-limit edge of its German rival, but it’s a far more cossetting companion.

In time, the S-Type’s hype subsided, and as the executive car market evolved through the first decade of the 21st century, its unashamedly old-fashioned looks began to count against it, especially against a backdrop of ‘flame-sided’ BMWs and futuristic Audis, which raised the bar in terms of executive car styling.

In turn, residual values tumbled, and the car that set Jaguar off on its current trajectory of serving more and more areas of the market tumbled from grace, to the extent that, today, it represents one of the cheapest ways into Jaguar ownership. Find one that has kept the rust at bay, though, and you’re sitting on a future classic. A car that marked a turning point in Jaguar’s history, and – 20 years ago – marked one of the brand’s proudest moments.