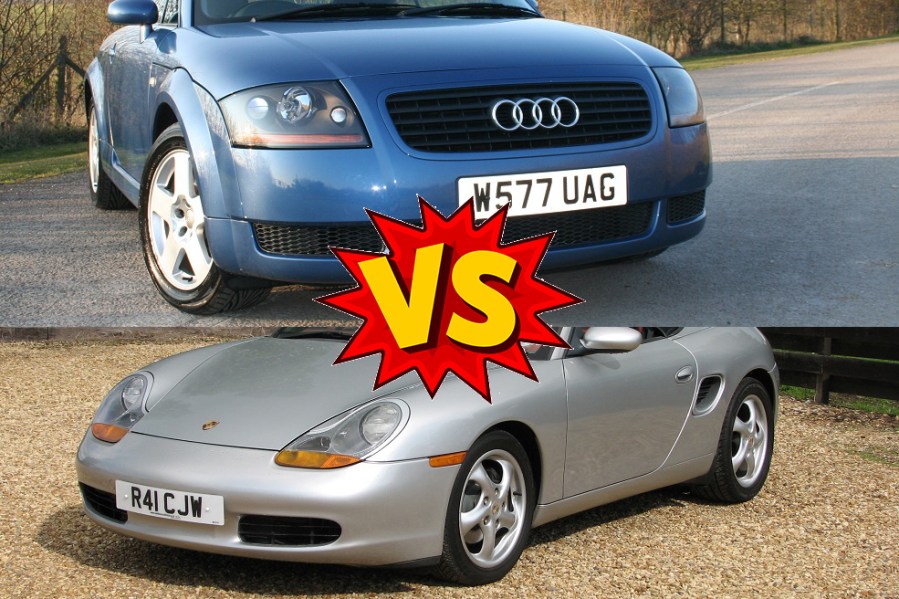 It’s Audi TT vs Porsche Boxster in this Classic Rivals as the top end of the TT market meets the bottom of the Boxster one. Where would your money go?

If you have a few grand to spend on an occasional car to take on long trips but must also justify itself as a daily driver if it needs to, thanks to the 1990s burst of sports cars there are lots of options. You might look at BMW’s Z3 for example, although it is a bit cramped, or Mazda’s MX-5, well that’s worse and not really an ideal touring car. An Alfa Romeo GTV might seem a good idea, until you find it stuck on the driveway waiting for that part to come over from an obscure scrapyard in Italy, and V6 ones are too expensive now anyway. Here’s where the Audi TT steps in. It’s based on the Mk4 Golf which, despite the reams of pub anecdotes to the contrary, is a very good thing. Maintenance is undemanding, performance very good indeed, and with the extra attention given Audis, the build quality is truly impressive. Find a nice one with Quattro and you’ll also be sitting on a future investment of sorts, at least if you don’t pile on the miles across mainland Europe. Which it would do, effortlessly and with a good amount of style. But while you’re here, what about that little bit extra? For the price of a really nice TT you could find yourself shopping for middling Boxsters, especially the early 2.5-litre models. They might be slow for a Porsche, but even a 225bhp TT would struggle to embarrass a Boxster, except maybe on the torque and traction rewarding Stelvio harpins. Fact is, this is a Porsche, and with it comes another level of sports car involvement in addition to the glamorous GT car on a budget factor. So, what’s the deal? 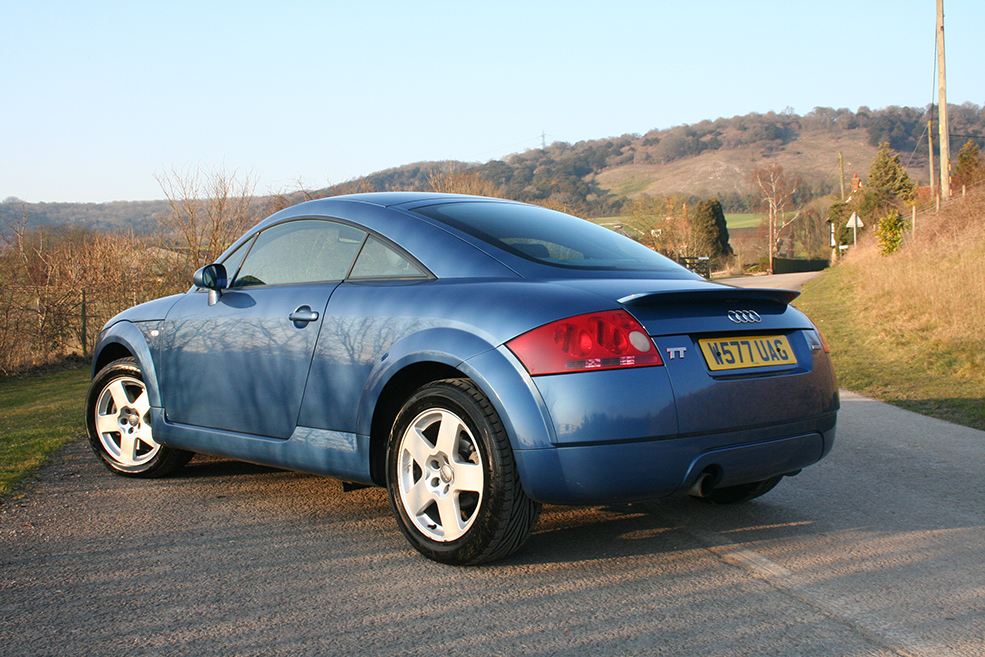 The TT was an immediate styling hit, and its pure lines have proved to age well even at twenty years old. Prices are convincingly on the rise, although there are still plenty left to keep things sensible. It is a buyer’s market, so you can reasonably pick out exactly what spec you fancy. The contemporary Golf GTI was criticised for being a bit slow and uninspiring, so we’d recommend avoiding the front-wheel-drive 148bhp models introduced in 2002. Yes, you can easily chip the engine up to the 178bhp or more of the other models, but the dynamic advantages of Quattro are worth seeking out nonetheless. Many will say that the 180bhp Quattro model is very much nearly as good as the 225bhp for less money, which is right, but since we’ve a Porsche to deal with we’ll take the 225 for argument’s sake. It will also prove to be the better investment in the long term, including the somewhat nose-heavy V6 model. The run-out Quattro Sport model, with the turbocharger cranked up to make 237bhp, has already risen sharply in value over the last few years. 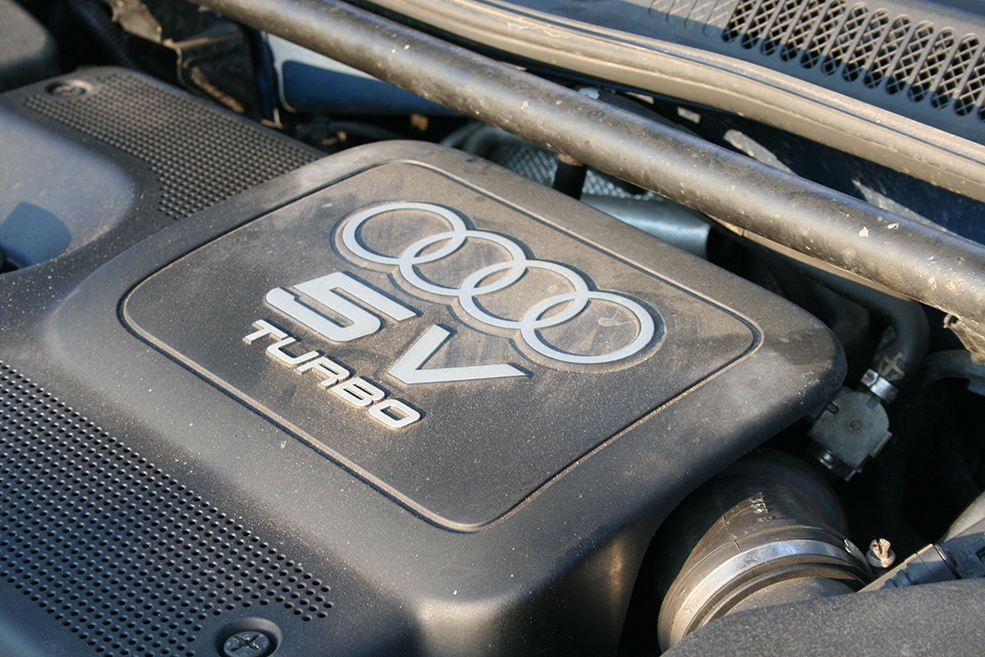 It’s the kind of car that you will find yourself looking back at, and the longer you own it the more you realise that the design has real depth to it. It’s all beautifully made, too, something which is particularly noticeable inside where an impressive attention to detail has been lavished upon the interior. There are touches of aluminium, like on the famously styled air-vents, and high quality soft touch plastics all over. It is a thoroughly nice place to be, and you’d relish the idea of taking it on holiday for a week. It’s got the boot space, too, with room for 2-3 decent suitcases and still some space leftover. 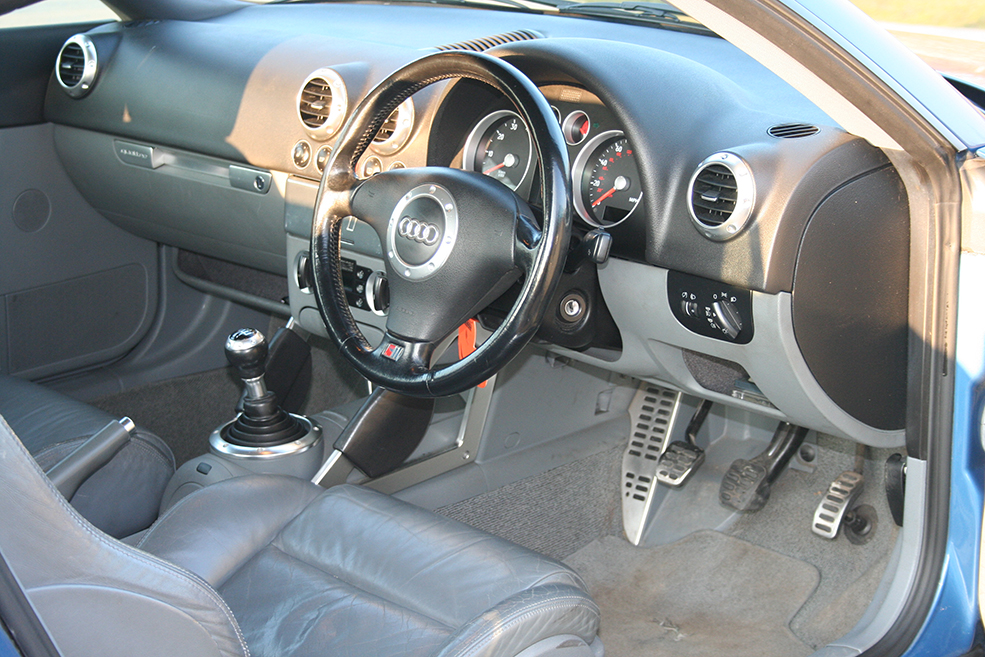 The ride quality is good, if a little firm at least not crashy thanks to an impressively strong structure. Supportive seats, usually in leather, help comfort levels. With the endless comparisons with the Golf, people often tend to forget that the TT was really the best driving Audi since the original Quattro. The chassis is well balanced, tipping into oversteer on a trailing throttle, rewarding input from the driver’s right foot and wrists, and the Quattro system adds a satisfyingly planted delivery of power on the exit of corners. The steering is unusually heavy for an Audi, too, and offers a good amount of feel, while the gearbox is classically clean in its shift if you go for the manual. The six-speed automatic is good, though, if not as sharp as the dual-clutch unit in the 3.2-litre models. 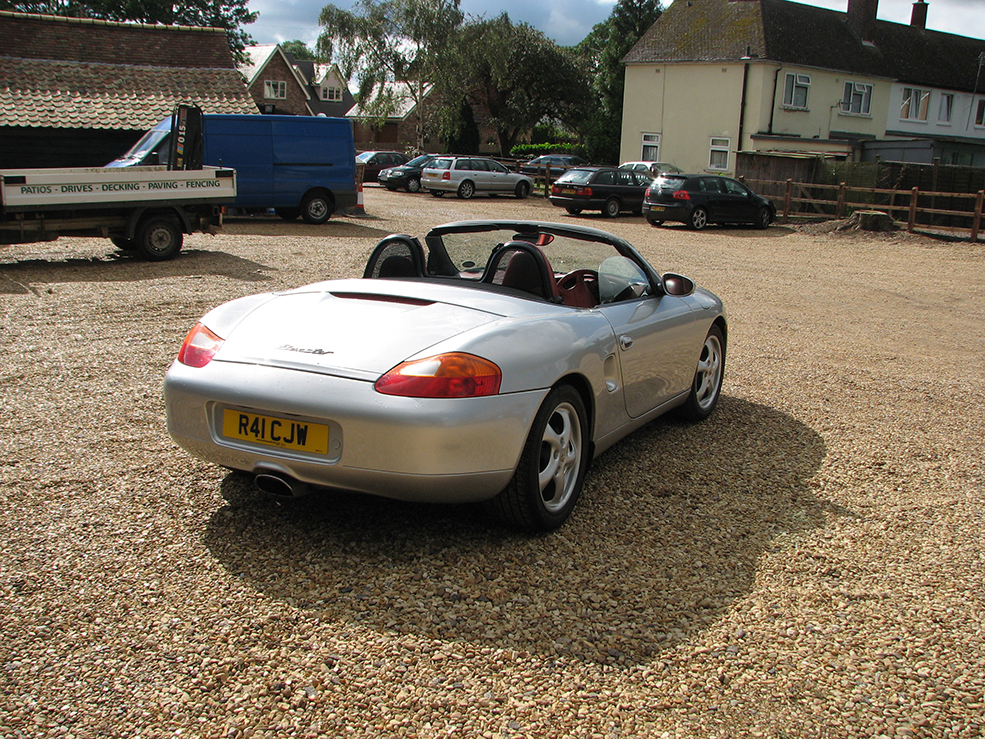 If the way the TT drives was an impressive return to form for Audi, the Boxster’s dynamic resolve was even more dramatic a moment for Porsche. Not only had Porsche engineered its first mid-engined car since the 914 of two decades prior, but it had done so completely banishing any sense of insecurity often apparent in cars of this layout. Much of the chassis was planned to be shared with the upcoming 996 generation 911, so in many ways the Boxster’s setup is from a class above, although it features MacPherson struts rather than double wishbones and coils at each corner due to packaging demands. A great deal of the components are made of weight-saving aluminium, which go some way to making the Porsche feel exceptionally fleet of foot. In fact, despite settling on a steel body, engineers succeeded in making the Boxster remarkably light and it shows against the 200kg heavier Audi TT. 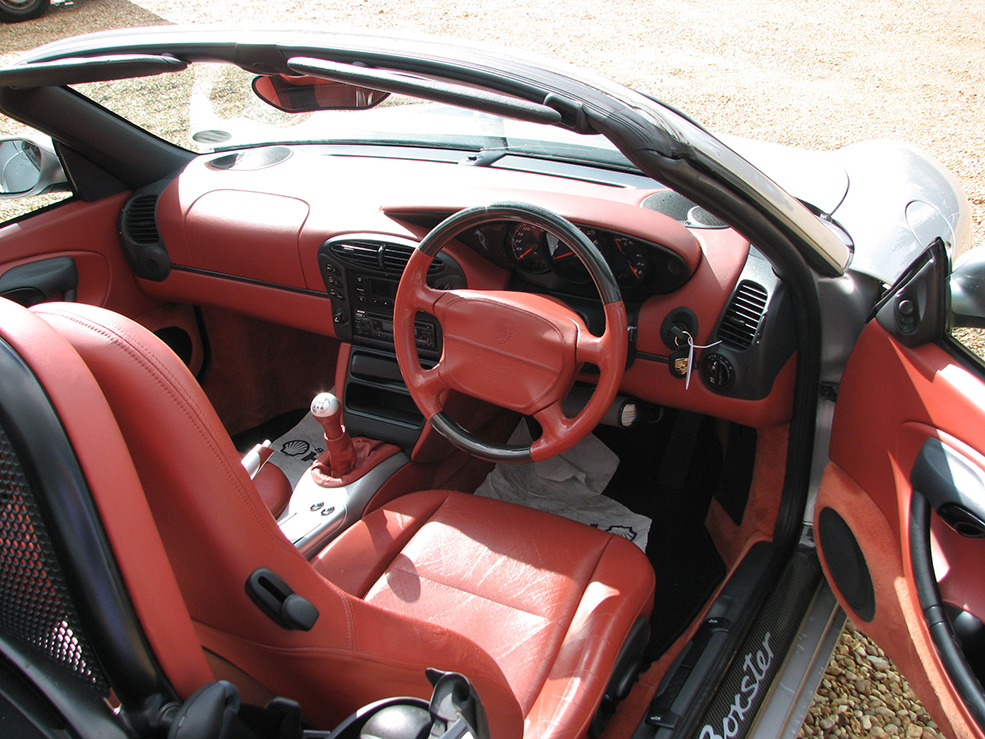 The engine is of course a water-cooled flat six, ranging from 2.5 litres in the earliest cars, to 2.7 litres and the 3.2 litres in the Boxster S. It’s all aluminium and has a dry sump. Power ranges from 204bhp to 258bhp, though the torque advantages of the 2.7-litre are what really tell without the six-speed gearbox of the Boxster S. There is a Mercedes-derived five-speed automatic available too. As we’ve already said, it will lose the TT for a moment out of sharp corners, but once it gets into its stride at about 4000rpm, the energy with which it wails up to a 7200rpm redline is so much more entertaining. 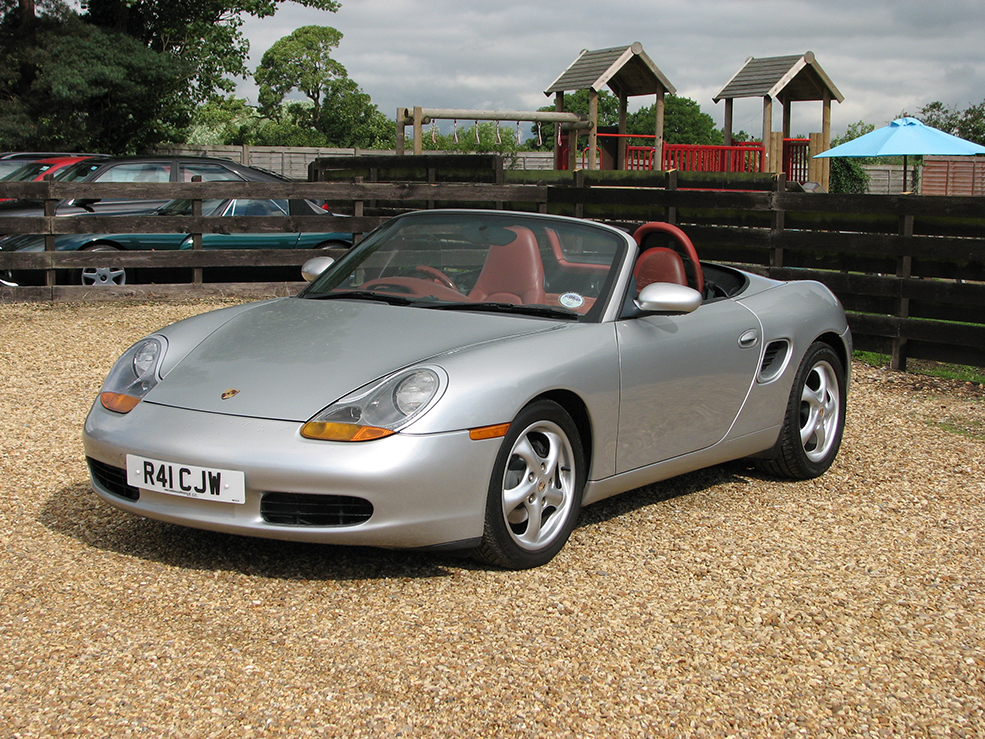 You’ll likely be travelling much faster through that corner, anyway. Not only is the Boxster lighter overall, but so much of its weight advantage is unsprung: like the monoblock calipers from the 911 GT1 racer. There’s more clever stuff underneath, too, like lower wishbones that act as aerodynamic ducts to cool the brakes. Road holding is undoubtedly greater than the less focussed Audi, despite their wearing similar tyres – 225/45 all round on the Audi, 205/50, 255/40 on the Porsche, both on 17” wheels (optional on the Porsche). And yet the Porsche also has a more supple ride quality to it than the Audi, and if you find one with the optional sports seats, more comfortable seats too (not to mention better-looking).

But the drawbacks are there. The interior quality just isn’t up to the standards of the Audi, and its design hasn’t aged as well either. Luggage space, too, isn’t as good, despite Porsche’s best efforts, even sacrificing some of the delicacy of the original Spyder concept’s form, but it still can’t quite match the practicality of the Audi’s hatchback boot. You can fit two modest suitcases, one in the deep well of the front and one in the wider but shallower rear boot. There will still be space for other bits and bobs, making long weekends more than practical. Expect only space for your jackets and a map in the cabin though. 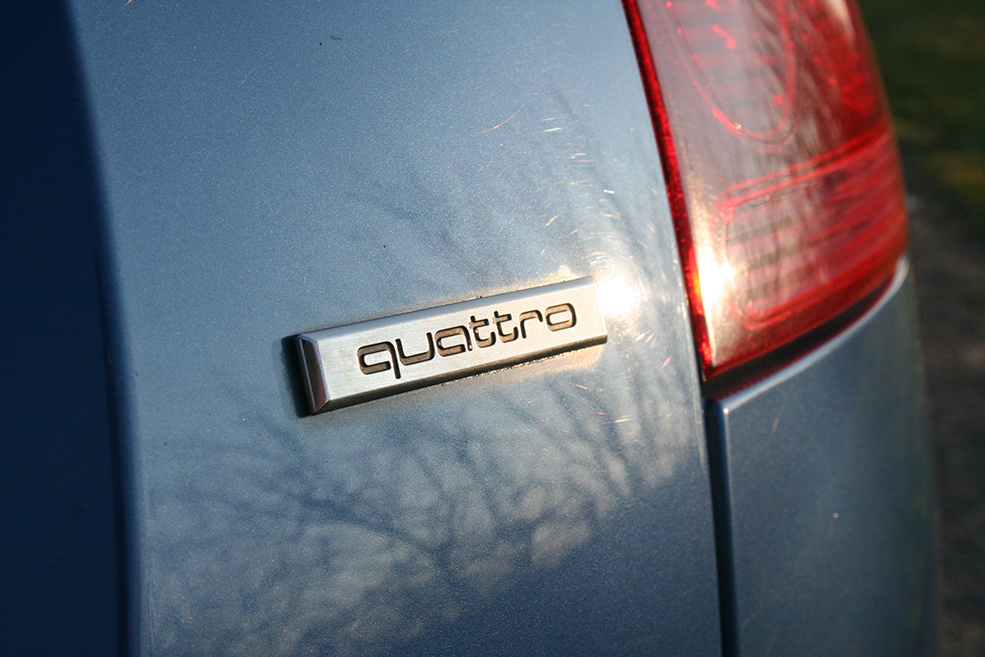 If you can afford the Porsche, it will be worth it. Here we’re talking about a £5000 2.5-litre model, and if you buy right it could well prove to be a cunning investment. Just look at Boxster S models, especially the later ones, to see the potential that the 986 has. We suspect that the early cars will have their time too. But the caveat is buying right, and budgeting for the maintenance. It will be a significantly costlier car to run than the Audi TT, and this should be factored in. So, while a £5000 TT 225 Quattro might look like a comparative waste of money, it could actually be the much smarter choice especially for someone looking to use it regularly. 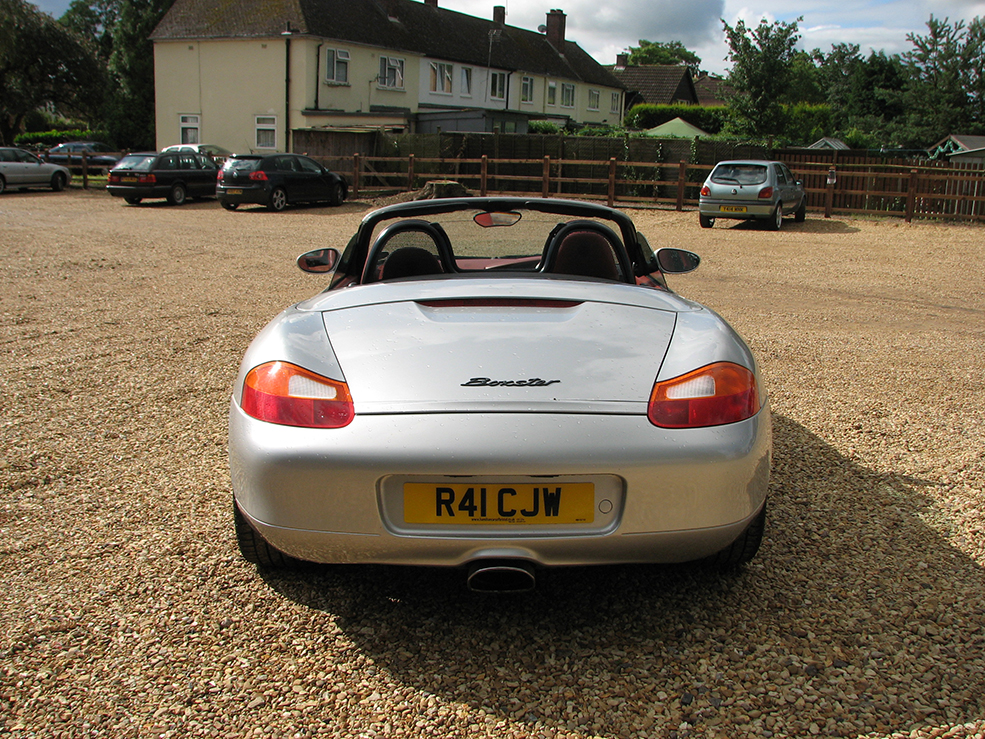 The Audi TT is an icon of design, a historic waypoint for the rising star marque that now rivals BMW and Mercedes, and seems to be becoming just as desirable as a modern classic as it was when it excited the crowds back in 1998. It drives well too, and you’ll love owning it. But if you find a good way in at the low end of the Boxster market, get a good one, you’ll forget all about the TT. It is just a more exotic way to travel, a better sports car, actually benefits from regular use, and you’ll find yourself stopping in your tracks just to stare at it. It has to be the Boxster.