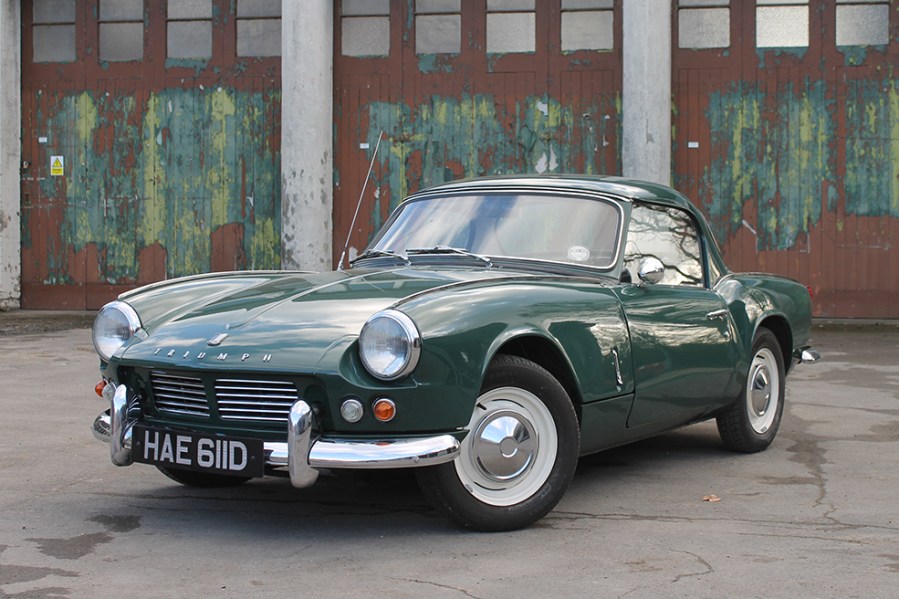 Based on the compact Herald saloon, the Triumph Spitfire was Triumph’s attempt to take on the Austin Healey Sprite and the new MG Midget. Here’s what you need to know before buying

With five distinct variants available at varying price and style points, there’s a Spitfire for everyone. The Spitfire spawned its own derivative; the Vitesse-engined GT6 coupe inspired by the Spitfire coupes raced at Le Mans.

Launched in 1962 and built until 1981, the Spitfire enjoyed a production run almost as long as the venerable MGB – and there are as many owners clubs and specialists out there to cater for the small Triumph as there are for MG’s finest. Not only is it a cheap and easy classic to own, but prices are growing ever stronger as the market wakes up to just what a little bargain they’ve been. With almost 140,000 built, finding a good example really shouldn’t prove difficult. But we’re here to help – this is what you need to look for.

It’s no secret that the Spitfire was inspired by the success of the Sprite and the quickest route to production was to borrow the chassis of the Triumph Herald and clothe it in a new sports body. The design work was entrusted to Triumph favourite Giovanni Michelotti, the Spitfire employing a hybrid construction with the body being welded in sections but retaining a separate chassis. This allowed a much more rigid structure than the Herald, while also allowing the car to sit closer to the ground thanks to the deletion of the Herald’s side members, with strengthened sill members making up for the lost rigidity. The powerplant was the 948cc 63 bhp engine.

The Spitfire was an immediate success at launch in 1962 but just two years later, the MkIII Sprite was offering similarly improved specification, encouraging Triumph to unveil the MkII Spitfire, identified by its horizontal grille and now boasting 67 bhp. 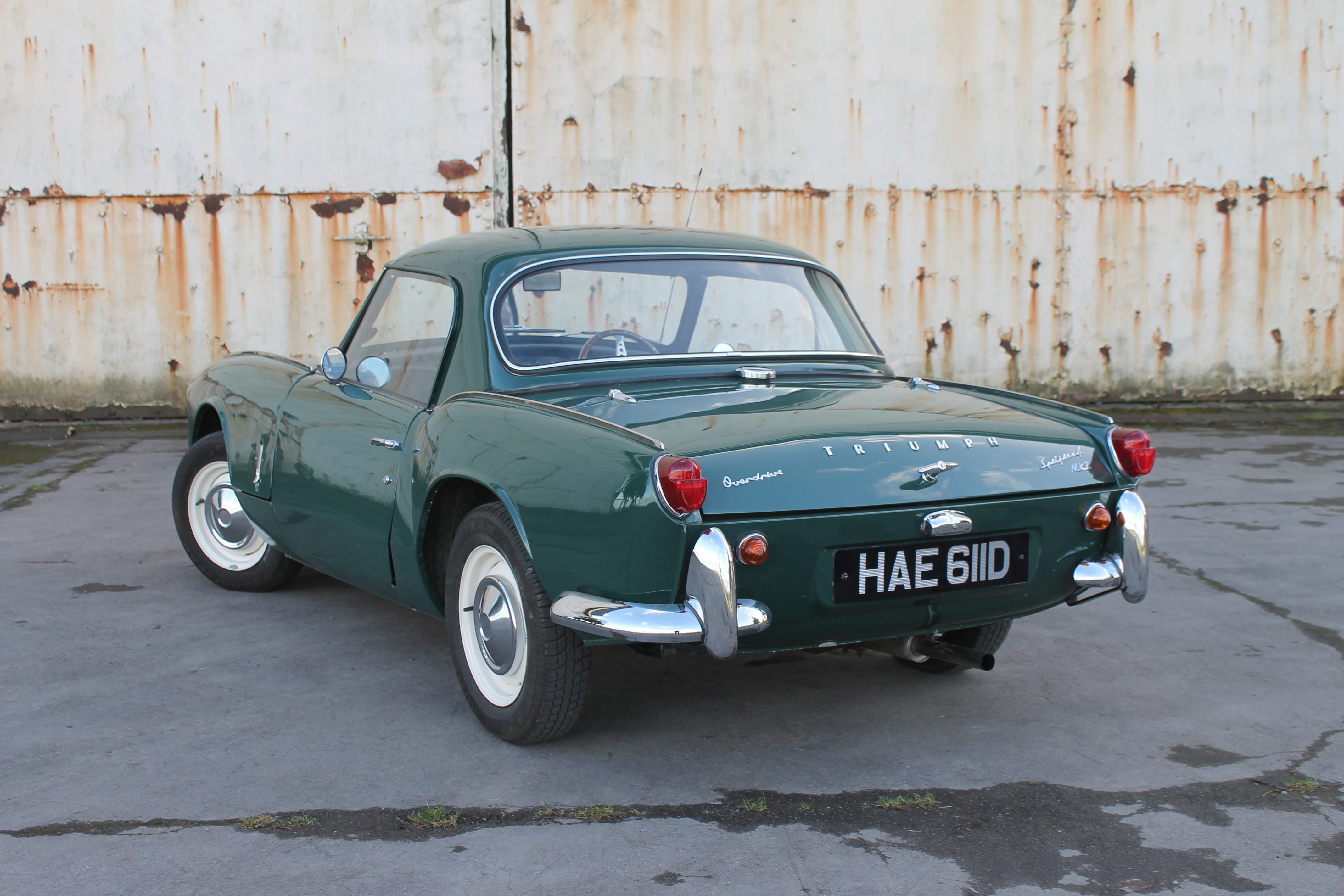 The two cars were on a level footing by 1968 when the MkIII Spitfire appeared, with its raised bumpers to suit US legislation, plus the 75 bhp, 1296cc engine which enabled it to crack the 100 mph barrier for the first time.

The increased power was by then starting to highlight the shortcomings of the Spitfire’s basic Herald-derived swing-axle rear suspension. A slightly unusual design employing a single transverse leaf spring at the rear, it allowed dramatic camber changes under load and could be a handful when driven hard.

The Sprite and Spitfire of course found themselves part of the same company when British Leyland was formed in 1968 and in 1970 the MkIV Spitfire appeared, with the Michelotti restyle adding sufficient weight to blunt performance. One plus point was the revision of the rear spring, with only the lower leaf fixed to the differential and the rest allowed to pivot slightly to reduce the camber change. The introduction of the 1500 engine in 1974 helped restore performance and although it offered just 71 bhp, the extra torque made the car more relaxing to drive and restored the 100 mph top speed. Production ended in 1980. 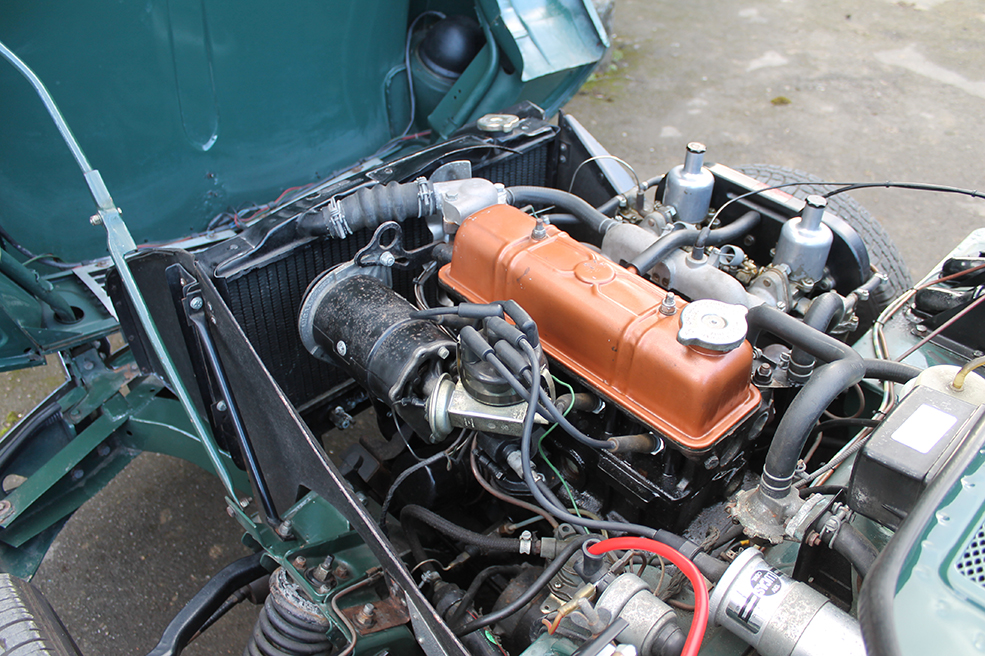 Triumph Spitfires used a series of four cylinder engines derived from that of the equivalent Herald or Dolomite saloon – all were fitted with twin carburetors, and depending on the model were 1147cc, 1296cc or 1493cc. The Mk1 and Mk2 used 1147cc engines, though in subtly different states of tune – the Mk3 used the enlarged 1296cc engine in 1300FWD tune, modified with different bearings for the MkIV. These engines can all suffer with worn thrust washers, easily tested by trying to manouvre the crankshaft fore-aft in the block or by watching the crank while an assistant dips the clutch. If the thrust washers fail, it’ll wreck the block and the crankshaft. MkIVs in particular can be affected, so check for bottom end noise upon startup.

The 1500s have their own issues – crankshaft wear, plus worn pistons and rings. Check for blue smoke and start-up rattles, and if the car is suffering budget for a replacement engine. It can often be no costlier than rebuilding your existing unit, and saves a lot of time in the long run.

All models were fitted with card panels either side of the engine, and while these are often removed it’s not a big deal. More concerning are the card panels either side of the radiator – if those are missing, cool air may not be channeled through the radiator and overheating will be more likely. While under the bonnet check the condition of the battery box, even lifting the battery out. It’s a known rot spot.

All Spitfires used a four-speed manual gearbox as standard, derived from that of the Herald range. Overdrive was optional on all models, using two types of overdrive unit – the D type and the J type. Synchromesh was standard on all bar first gear on the Mk1, Mk2 and Mk3, while the MkIV and 1500 gained full synchromesh. Synchromeshes can wear, so check for baulking during gear changes. Rumbling gearboxes indicate worn bearings, whining gearboxes indicate worn gears. It can make sense, if a replacement is required, to source a 1500 box. That’s because these later boxes are stronger; BL beefed it up for use in the Marina, and it can handle more abuse and more power as a result.

The Spitfire was fitted with the Laycock-de-Normanville D-Type overdrive until 1974, when it was replaced with the Laycock-de-Normanville J-type overdrive. The J-type was fitted to all overdrive-equipped Triumphs from Dolomite through to Stag, so replacements shouldn’t be too hard to source. Overdrive units are relatively simple – most of the problems can be traced to three small issues. Firstly, electrical connections, secondly, low gear oil, and thirdly the overdrive relay. None of these is a nightmare to sort, and so we wouldn’t be too hesitant to buy an otherwise good car with a non functioning overdrive. It is, however, important to check that the overdrive oil is changed every 50000 miles at the most. 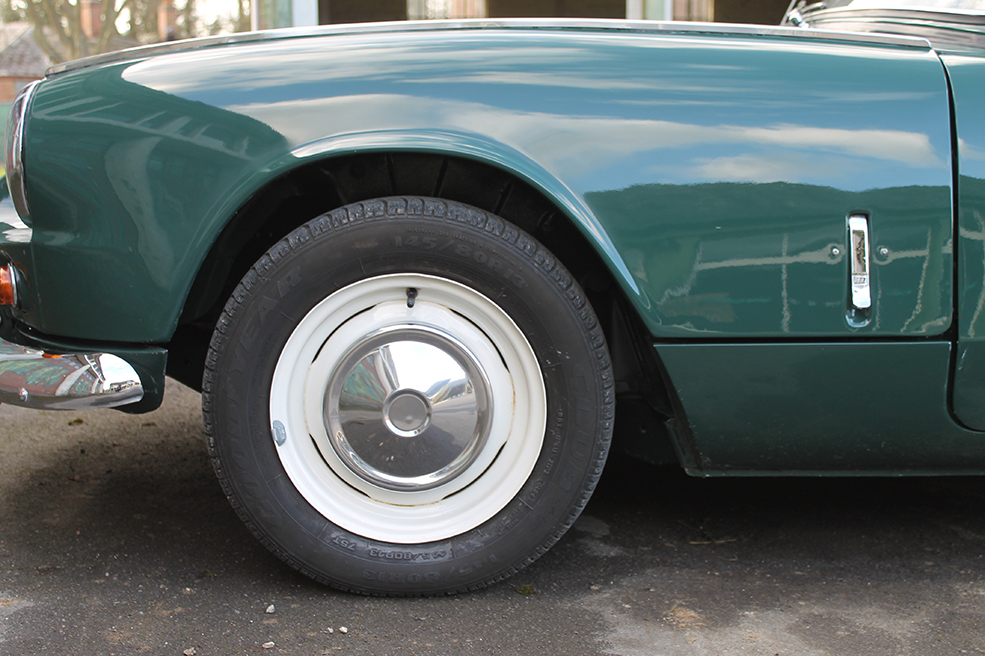 The front trunnions wear if they’re not pumped full of EP90 every six months, and the nylon bushes can wear. But then, they’re not especially hard to replace. Anti roll bar links break, wheel bearings wear, as do the steering rack and front top mounts. None of it’s particularly scary stuff to sort out, and access is brilliant – you can check for wear by opening the bonnet and wobbling the wheel from above.

Rear wheel bearings wear and require a press to replace – worn bearings can be an issue if left as they act directly on the halfshaft and can wear this too. Rear leaf springs can wear, if the top of the rear wheel is hidden in the arch it’s time for a new spring.

Mk1, Mk2 and Mk3 cars can suffer from tuck-under at the back, which can lead to unexpected oversteer. Many people modify the rear ends using GT6 items – either Rotoflex or post Rotoflex. If this has been done it will add value to the car, as will bigger brakes. Polybush kits are freely available, and their fitment is desirable but doesn’t increase the car’s value.

Parts are cheap – we found brake discs for £30 per pair online for instance – and specialists such as Rimmer Bros should be able to provide everything you’ll need. 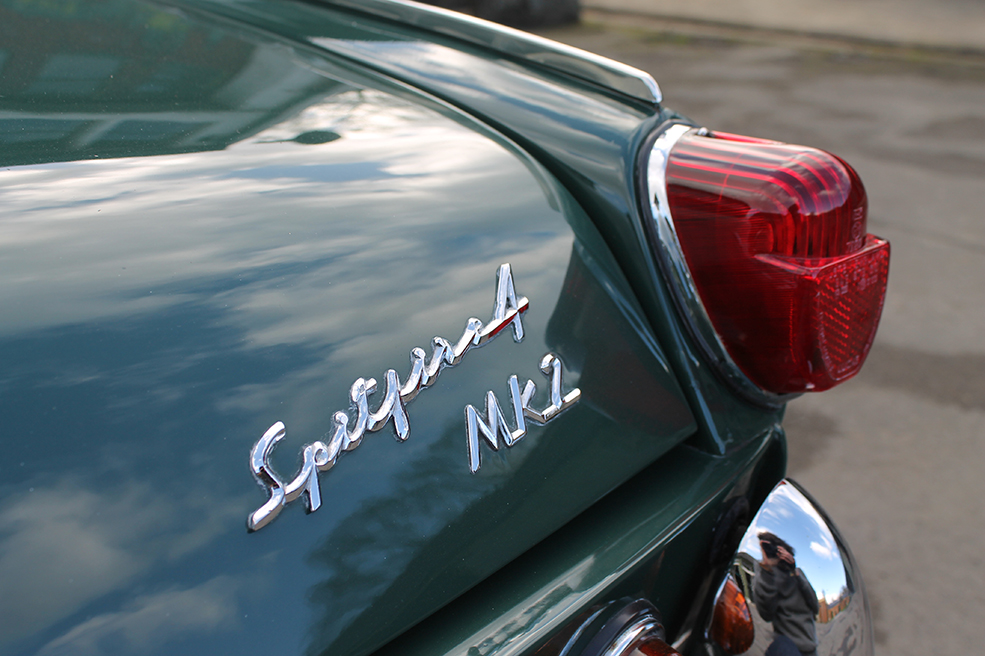 The beautiful thing about a Spitfire is that all the panels are bolted on, and can theoretically be replaced. So a scabby body needn’t be the killer it is on a monocoque providing the chassis is in good condition. Obviously there are things to check with the body – in particular, check the condition of the bonnet; it’s a large panel and replacement will not come cheap.

Check the chassis ahead of the front suspension for any signs of accident damage – it should be clear, if the chassis isn’t straight or if there’s any buckling. It’s also well worth looking at the state of the outriggers under the bulkhead – these are in the firing line for mud, water and salt thrown up by the front wheels, and it’s entirely possible that these will have rotted. Replacement in situ is possible but fiddly, and not a job we’d like to take on when there are several nice examples on the market.

Don’t worry too much about interior trim either, as it’s all available from specialists in a choice of materials. Standard seat covers and door cards can be cheap, though non standard leather replacements can get expensive. It’s worth checking the hood too, standard hoods are vinyl and can crack or split, as can the plastic rear windows. It’s possible to get replacements in double-duck canvas, and even in mohair if you have the money. Better quality hoods do add value, so be prepared to pay a little more for a car with a good mohair hood.

The electrics on a Triumph Spitfire are almost laughably simple, and boil down to the engine electrics, lighting, radio and cigarette lighter. There’s virtually nothing complicated enough to go wrong, but a few minutes with a multimeter should solve most of the issues you’ll encounter. Don’t let the electrics put you off the right car. 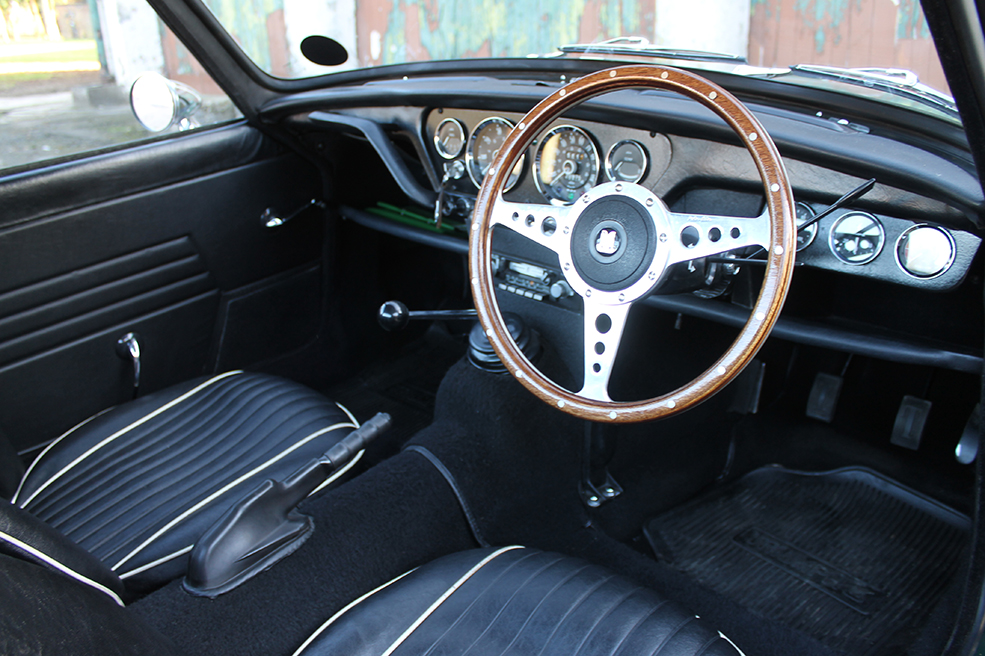 The Triumph Spitfire is as close to a full-sized Airfix kit as you can get – everything is bolt-on, it’s all easy to access and service, and it makes a lot of sense as a starter classic for that very reason. Spares and expertise come cheap, and yet you can counter this parsimony with the fact you own a two-seat sportscar with an innocently pretty body and an amusing chassis.

The market’s started to wake up to what the Spitfire can offer and prices are firming, but now makes a sensible time to buy given that values always strengthen ready for summer. Buying a basket case needn’t be the end of the world either – it’s one of the easiest cars out there to restore.

What would we buy? For investment purposes a really nice early Mk1 will take some beating, though the simpler folding hood of the Mk3, MkIV and 1500 will appeal for regular use. For daily driving the extra power of the 1500 might make some sense, as does the fact that a good 1500 is a far cheaper prospect than an earlier car.

Try to avoid overly 1970s shades like Russet Brown, though as a small sports car it can carry off shades like Magenta and Mimosa Yellow better than many others car. We’d advise nice sensible greens, blues and reds for the later cars if we were buying to resell.

For earlier cars, pastels seem to be the more desirable shades, along with the perennially popular Signal Red. But condition should come first – don’t be put off by the colour of an otherwise perfect car. American imports are relatively rare, but make sure they’ve been converted to UK spec or they’ll be harder to sell – nobody wants the big plastic bumpers or the emissions kit of the later cars. 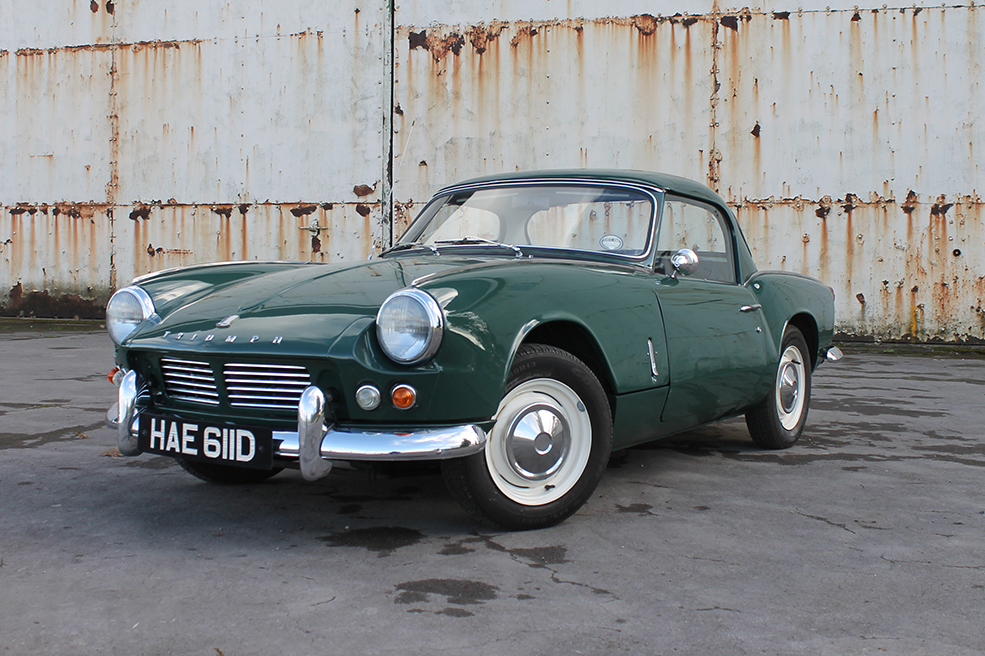