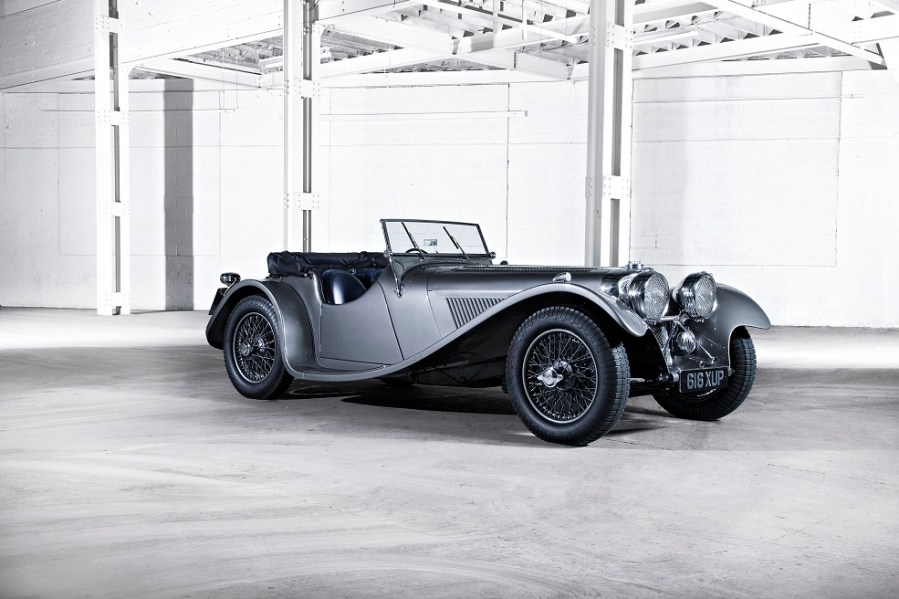 It’s not uncommon within the car industry to see companies reinvent themselves with a new product direction and often a new name to go with it: Datsun’s metamorphosis into Nissan for example and Austin Rover’s move to the more upmarket Rover Group. One of the earliest name changes was William Lyons’ decision to change the name of his car-making business from SS Cars to Jaguar 85 years ago. We chart those Jaguar sports cars through the years.

Back in April 1945 the dust had quite literally barely settled on the wartime destruction and the SS Cars name derived from the company’s former title of Swallow Sidecars had rather too many Third Reich connotations to be a marketing man’s dream. As Sir William later commented with superb understatement, it was a reminder of “a sector of the community not highly regarded.”

The choice of name was an easy one, since the Jaguar title had in fact been introduced a decade earlier with the SS Jaguar saloon which had been unveiled in September 1935. This would be joined by the SS Jaguar 100 sports car which can take the prize as the first car to carry the Jaguar name.

The era of the Jaguar sports car began in earnest shortly after the formal name change with the launch of the XK120, the first of the illustrious line which would be replaced by the E-Type. Whether the XJ-S was then a worthy replacement for the E-Type is a controversial question but the newer car certainly replaced it in the firm’s two-model range right into the ’90s. The XJ-S, after a glorious swansong as the facelifted XJS would then evolve into the XK8, itself replaced by the high-tech aluminium XK in 2005 which itself would be replaced by the very different F-Type in 2013. 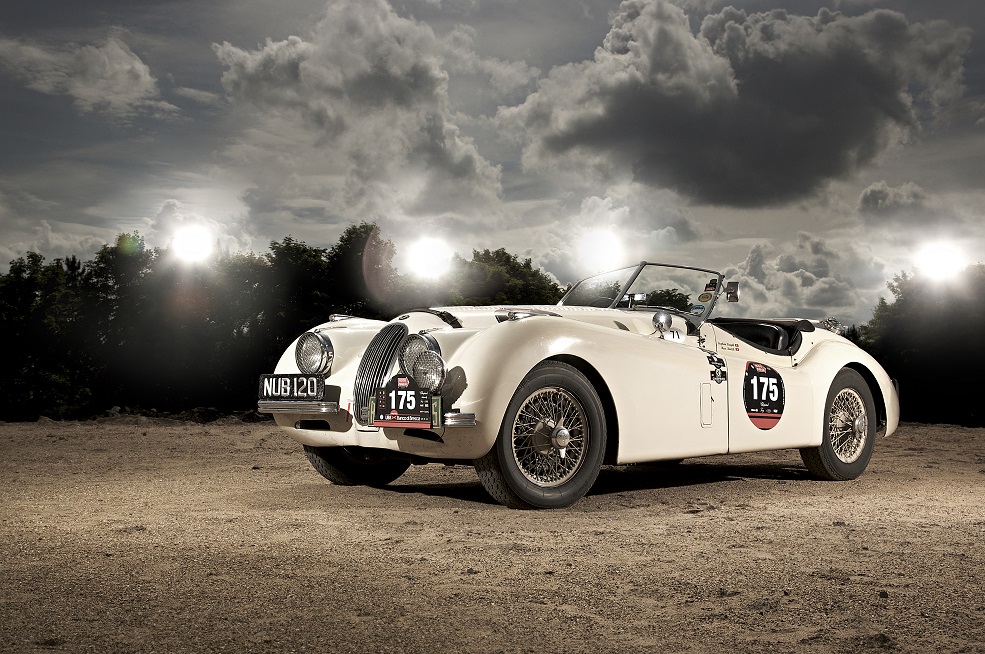 The XK120 owed its existence to the usually measured William Lyons being caught off guard. The all-new XK engine had famously been developed during night time firewatching sessions at the Coventry factory and when hostilities ended was quickly developed into a production form. The first engines were running as early as 1945, but the wartime hit on finances didn’t leave resources spare for other activities, meaning that the all-new MkVII saloon Lyons wanted to debut as his first all-new postwar model would simply have to wait, the MkV launching instead with the old Standard engine.

The XK engine still needed a home though and Lyons wanted something glamorous for his stand at the 1948 Earls Court show – the first postwar British motor show. The solution was a quick fix which proved to be a resounding hit: a new sports car which used an aluminium-panelled body Lyons would later claim had been sketched up in just a couple of weeks, sitting on a shortened MkV chassis and with the twin-cam XK engine in its 3442cc 142bhp production form.

Billed as the XK120 Super Sports – the XK being the engine and the 120 supposedly the car’s top speed – the result was a runaway success and took Lyons by surprise. An initial run of just 200 had been planned but the firm’s newly appointed US importer offered to take them all then and there. Before the show had even ended, Lyons was back in Coventry arranging for Pressed Steel to make a steel-bodied production version.

The XK120 would later prove its 120mph capability on a Belgian motorway and would be rallied and raced successfully all over the world. From that initial 200-off proposal, over 12,000 XK120s eventually left the Browns Lane plant. 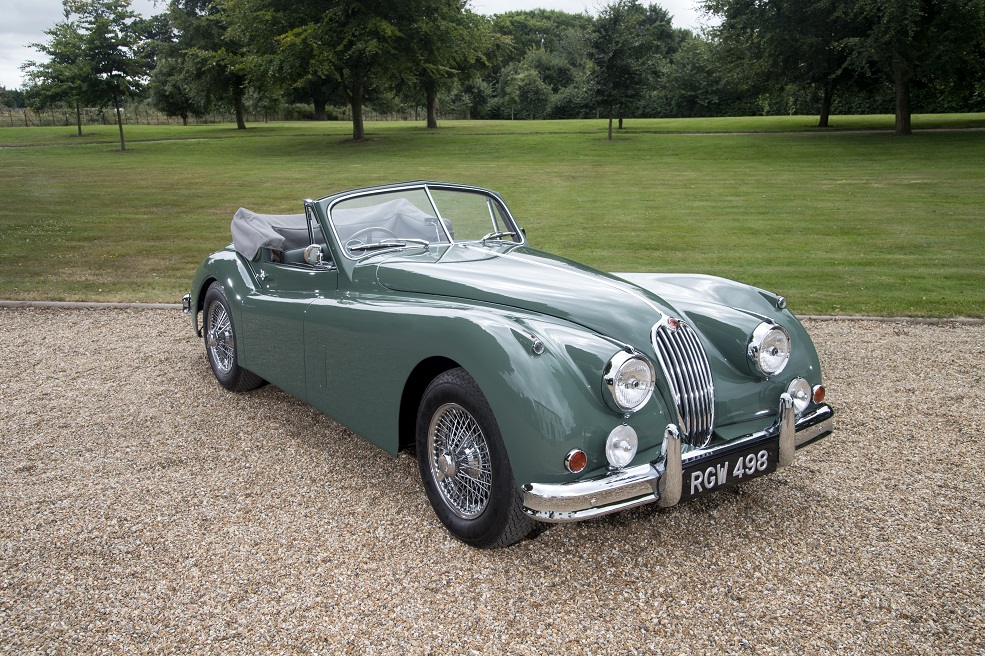 In modern terms the ‘mid life’ facelift, the XK140 debuted in 1954 and moved the engine three inches forward to provide increased cabin space, with the coupe moving the bulkhead forwards even further to permit ‘+2’ rear seats. The front end also received a new grille in the ‘corporate’ style to match the new Mk1 saloon.

Steering went to a rack set-up and the XK was boosted to 190bhp by standardising the XK120’s SE option, with a new SE option adding a C-Type head to take things up to 210bhp. 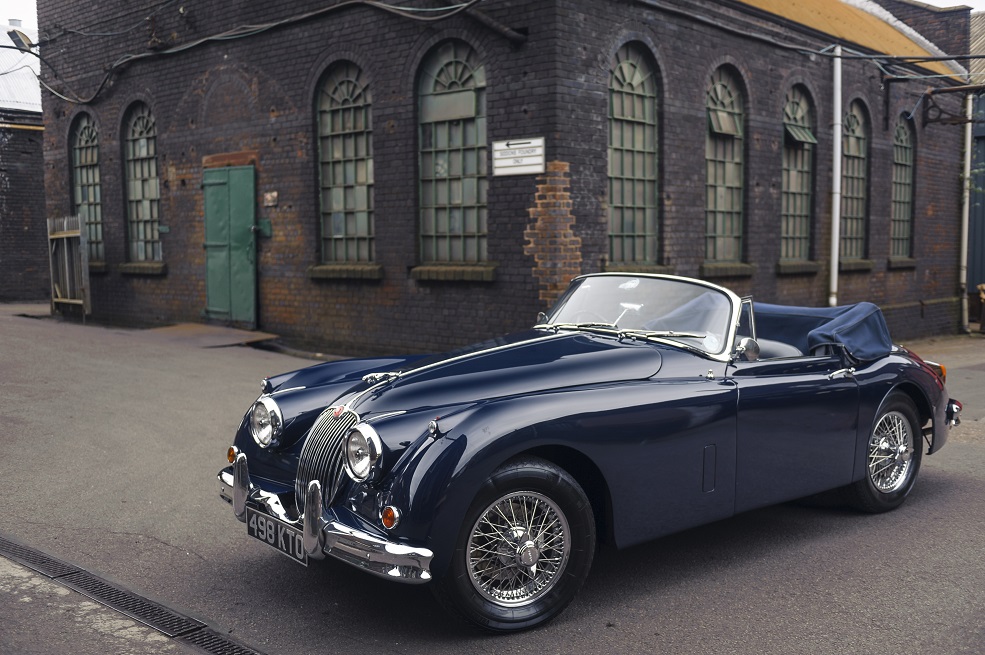 The XK140 was short-lived, replaced by the XK150 in 1957 which lost the old fashioned split screen and gained a wider glasshouse for increased elbow room, matched to a widened bonnet and reshaped wings. Slimmer pillars completed a modernisation of the original shape and the standard engine was now up to 210bhp, paired with standard-fit disc brakes developed for the C-Type. In 1959 the ‘S’ model added a straight-port head for a 250bhp result, the ageing XK suddenly becoming overnight one of the fastest sports cars on the market. Later the same year the 3.8-litre XK would be added, offering 265bhp in ‘S’ form which meant 0-60 in a very modern seven seconds and a 140mph top speed. 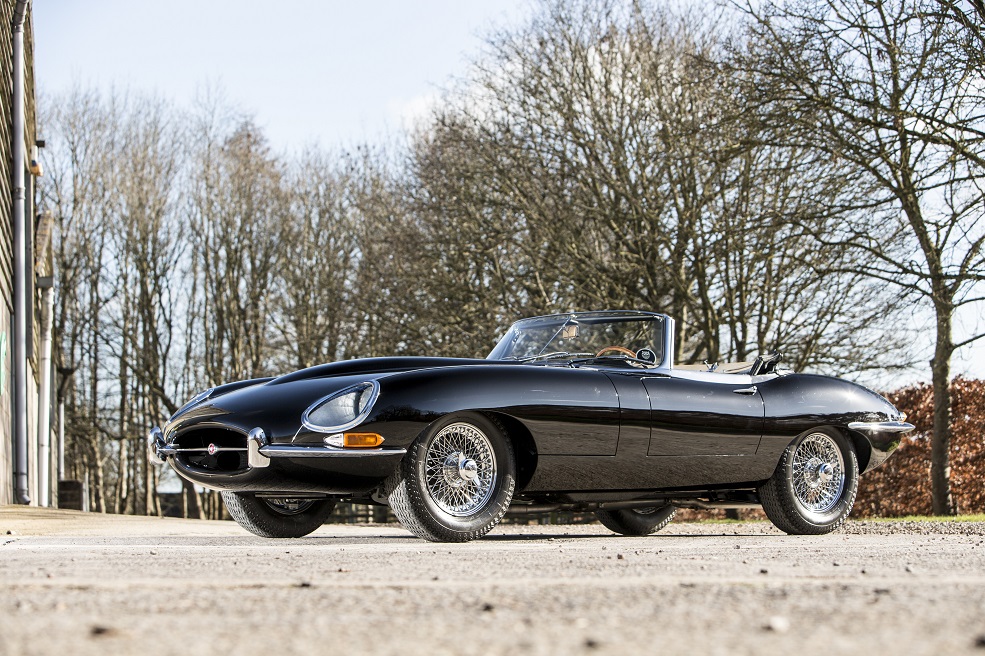 Launched in 1961, the E-Type took all that was good about the XK and wrapped it up in a high-tech new package including a monocoque bodyshell using lessons learned from the D-Type racer, plus an innovative independent rear and torsion bar front suspension.

Launched in 3.8-litre form, it offered pace to rival the fastest supercars of the day, yet like the XK120 its price put it within reach of successful professionals rather than celebrities and the super-rich. To silence rumours of production cars not being as quick as road test examples, Jaguar installed the 4.2-litre version of the XK engine in 1964, officially rated at 265bhp but vastly more torquey.

In 1966 the four-seater 2+2 was added to the range with a nine-inch longer wheelbase, taller screen and longer doors plus the option of an automatic box. In 1967 the headlamp covers were  deleted among some 21 other detail changes which went into the ‘Series 1.5’ and the following year the Series 2 arrived with chunkier wraparound bumpers, lower rear lights, bigger air intake and optional air conditioning and power steering – all of which made it more appealing to the important US market.

The importance of the US market was reinforced in March 1971 when the Series 3 E-Type arrived with the newly developed V12 engine and using the longer 2+2 wheelbase.

Although regarded by some enthusiasts today as a dilution of the original hardcore sports car, the refinement of the V12 was beyond question and the easy power on tap made the E-Type a wonderful high-speed cruiser, especially with the optional automatic. The end was in sight though and the E-Type would be replaced by a very different car in 1975. 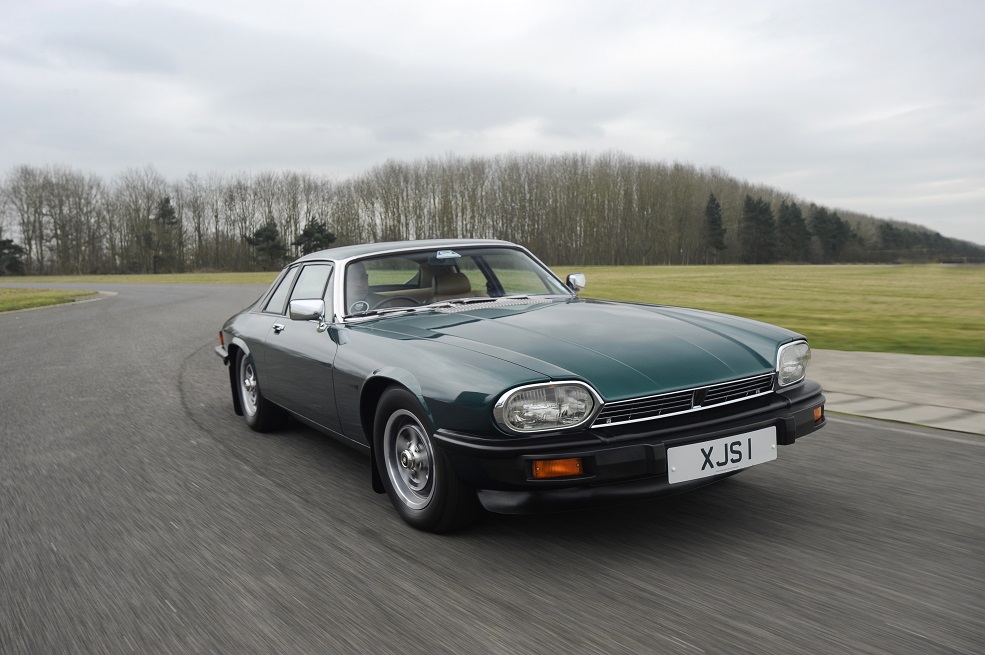 That car was the XJ-S, launched in 1975 but living until 1996. A very different animal from its predecessor, the XJ-S was more of a grand tourer and a long time in the making with development of an E-Type successor having started in the late Sixties.

The car was launched solely in V12 form with only the injected V12 and either four-speed or automatic box. The car may not have been the hardcore sports car people were expecting but nobody criticised its crushing performance and 150mph pace… although plenty criticised its 14mpg thirst. This was partially solved by the HE model in 1980 taking economy up to 22mpg and then more properly in 1983 when newly-installed Jaguar chief John Egan had the idea of trialling the new 3.6-litre AJ6 engine in the low-volume cabriolet before risking it in the crucial XJ40 saloon. The six-pot XJ-S became a favourite, as did the open version which evolved into a neat factory full convertible in 1988,.

The six-cylinder was enlarged to four litres in 1989 and when the Ford takeover saw financial efforts concentrated on production facilities the planned XJ-S replacement became a heavy facelift instead. The new car, renamed XJS, received 180 new or modified panels and quality improved greatly while the car’s appearance was suitably modernised. With a stretch of the V12 to 6 litres in 1993 the car finally bowed out in 1996.

The XJS’s replacement wasn’t as all-new as you might think, since significant sections of its structure remained in the XK8. The front suspension used a new design based around unequal length double wishbones carried on a lightweight aluminium subframe. At the rear, the long-serving Jaguar independent set-up derived from the XJ saloons was used, with the driveshaft acting as the upper link and the assembly mounted on a subframe. The bodyshell used 30 per cent fewer panels than the XJS yet offered torsional rigidity 25 per cent better.

The V8 engine was state-of-the-art and initially offered 290bhp from 4 litres, later enlarged to 4.2 litres and 300bhp, with the supercharged XKR producing 370bhp and then 400 bhp.

Facelifted in 2002, the XK8 would be replaced in 2005 by the similar-looking but very different XK and by then had proved that the revitalised Jaguar was a credible force among European premium brands. 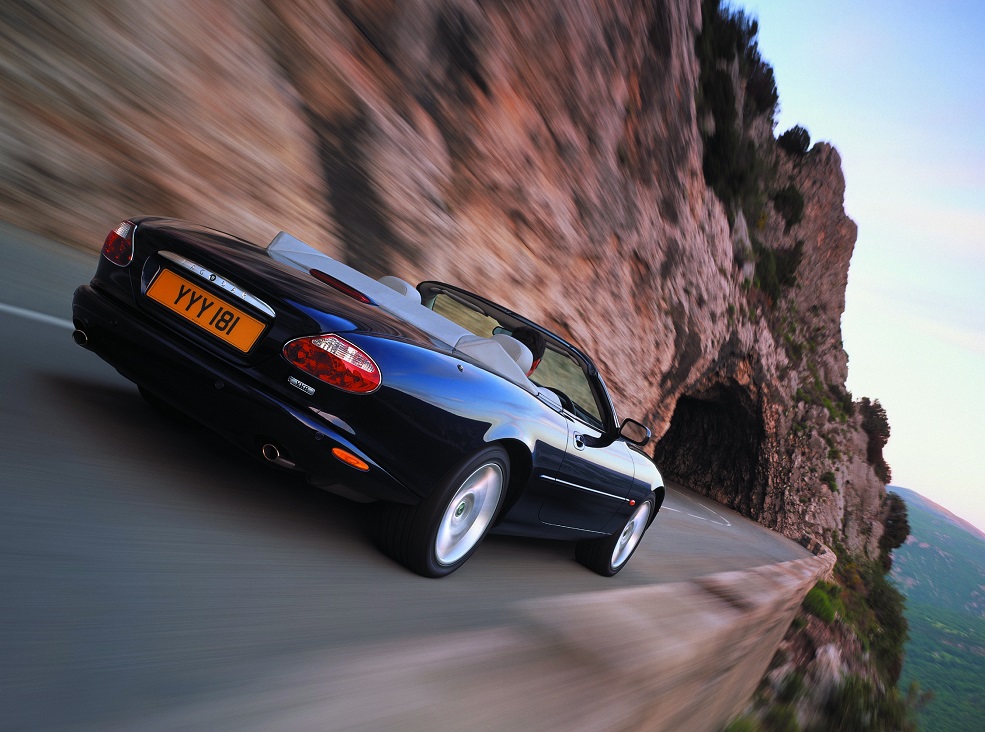 With Ford money behind it, Jaguar was able to move into aluminium bodyshell technology, the first example of this being the ‘X350’ XJ saloon. Initially carrying over the engine options from the XK, the X150 would later see the V8 stretched to 5 litres and 385bhp, boosted to 510bhp in the XKR… or a mighty 550bhp in the XKR-S. In 2014 it was phased out in preference to the smaller, more focused F-Type. 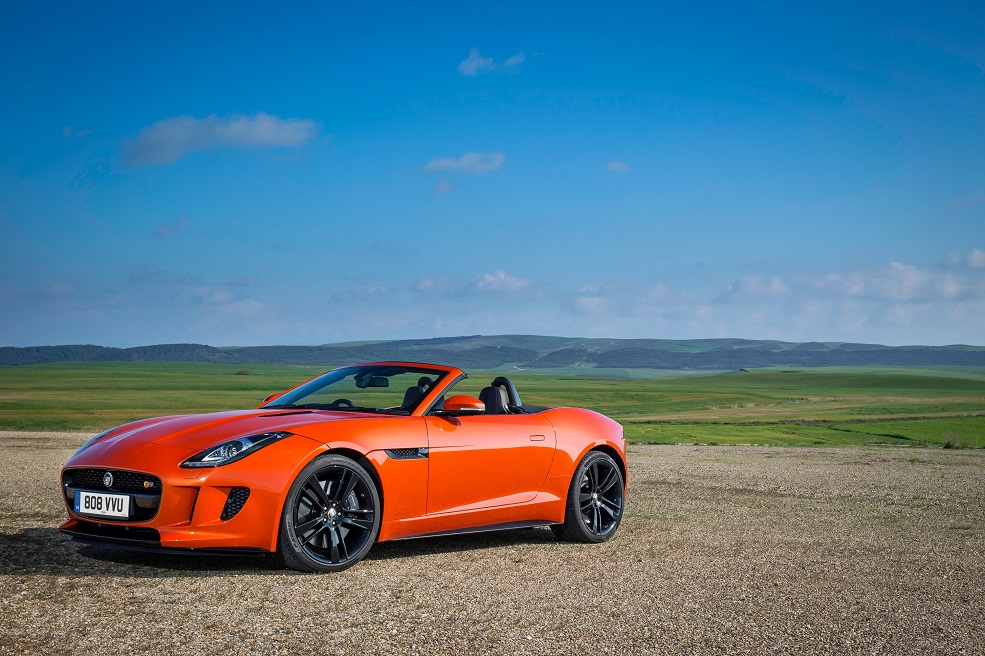 Introduced in 2013, the two-seater F-Type is a very different animal from the bigger XK grand tourer and marks another about-turn for Jaguar sports cars, a change of direction similar to the step from E-Type to XJ-S. The aluminium-bodied F-Type was offered with supercharged V6 or V8 engines, later joined by an eco-friendly turbocharged four-pot – the first in Jaguar history.