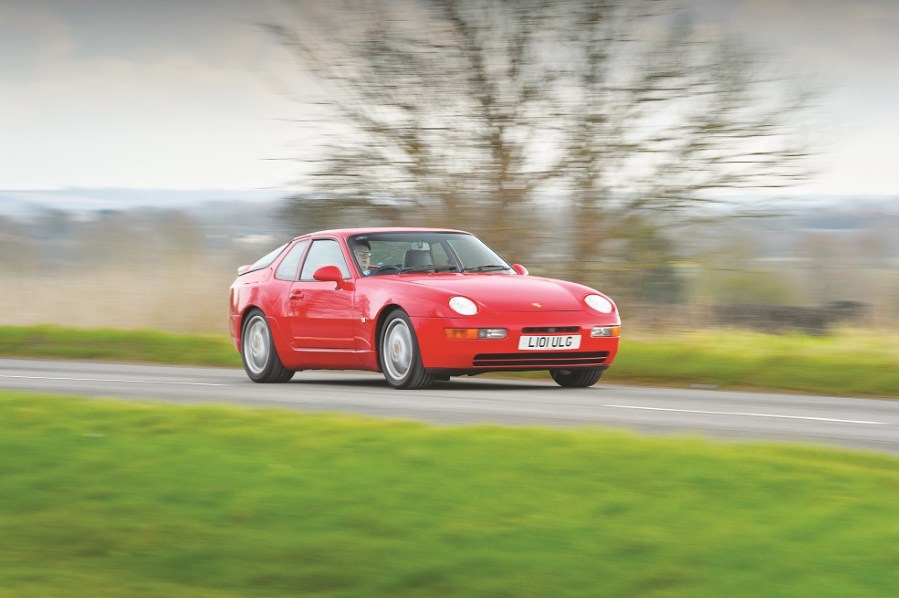 The final evolution of the 924/944 line, the Porsche 968 Sport was the last gasp of the front-engined Porsche sports car.

When you think front-engined rear-wheel drive Porsches you think 928 and 944. The 968 seems to escape the minds of the majority of petrol heads but not Porsche enthusiasts. The body is almost identical to the 944 but incorporates the pop-up lights from the 928 (visible, rather than covered like on the 944). Those that do know about the 968 will probably allude to the Club Sport variant as well, the all-guns-blazing, bared-back car. As a result, the 968 Sport can be regarded as a forgotten classic that deserves praise in its own right, separate to its predecessors and Club Sport model.

The 968 is essentially the successor to the 944, featuring the same iconic front engine, rear-wheel drive layout. The 968 retains the earlier cars’ rear transaxle giving it almost perfect weight distribution, which helps to explain why the car feels so well planted in the corners. Porsche Guards Red compliments the low nose and the wider wheel arches helping to push the eyeline towards the rear of the car for a sleek and muscular look.

The change of pop-up headlights from covered to open helped to bring the car more in line with the original 928 and in turn the 964 911, 993 911 and then the newer 996 911. The front end became synonymous with the rest of the Porsche line-up, although the 911’s headlights were fixed.

The interior remained much the same as the 944. The oval dash remained in place as well as the all-leather seats. The materials used are again very similar to its predecessor, which is a good thing as they’ve been praised with being robust and durable passing the test of time. Which is true, this 1994 968 pictured has covered 79,000 miles yet its interior is neat. The only criticism for this particular example is the seat bolsters on the driver’s seat have become cracked and worn; we would look to have this retrimmed to match the rest of the interior. 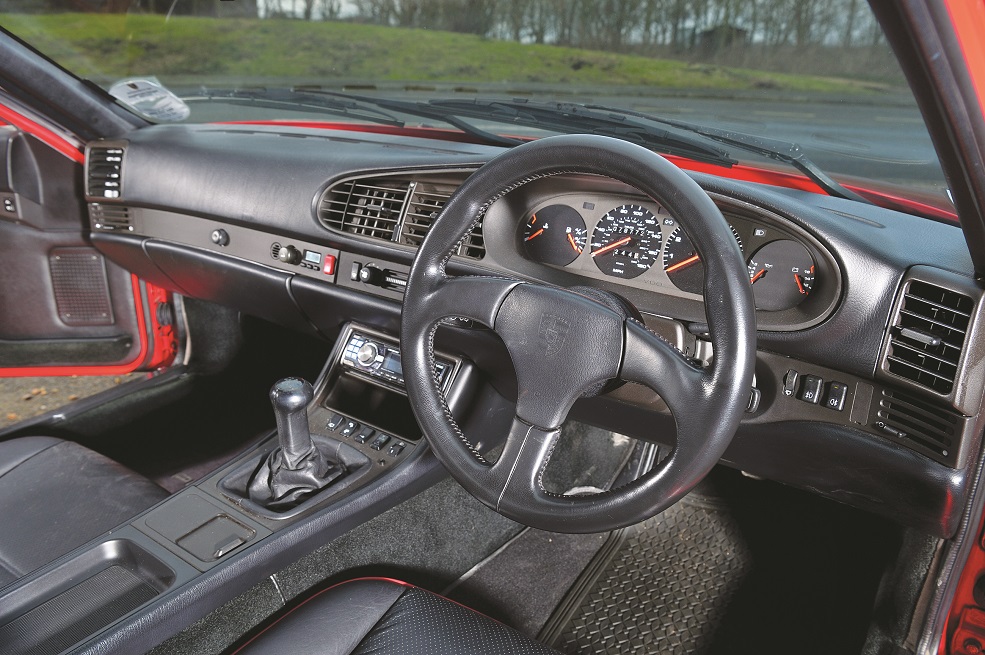 The great thing about the UK-only Sport variant is that it’s essentially a Club Sport with added luxuries and more than half the price in today’s market. In fact, it was in 1994 and early 1995 that Porsche GB ordered 306 Club Sport cars for import. On order, Porsche GB branch specced the cars with the luxury package option as well as the removal of the rear 968 CS badge. As a result, Porsche Germany still listed the cars as Club Sports, even down to their Certificates of Authenticity. The Sport badge was subsequently added to the rear (specifically a UK-only label), which has led to some confusion today as to the car’s identity; many of them are wrongly labelled as standard 968s, which feature slower performance specifications.

The power remained the same, nonetheless. The actual differences in weight are most likely limited due to luxuries being added back in, such as a rear bench and leather seats; however, the reworked chassis helps to improve the characteristics over the standard car.

The engine is a very sophisticated version of the four-cylinder, 3-litre, 16 valve unit first used on the Porsche 944 S2. The 968 was heralded as the first to use Porsche’s VarioCam variable intake camshaft control for optimum power throughout the rev range. Improved combustion chamber and inlet manifold design gave the engine an extra 20hp poke, bringing the total up to 240 bhp at 6200 rpm and 225lbf.ft of torque at 4100rpm. At the time of production the engine had the highest displacement per cylinder of any car engine and also the highest torque output of any unblown 3-litre engine – quite some achievement. Clearly Porsche had invested massive development on this engine which shows in its results. As with previous engines, twin balancer shafts keep vibration and noise down to more than acceptable levels.

The rear-mounted gearbox is a six-speed manual or a four-speed Tiptronic, the first ever on a Porsche production car. 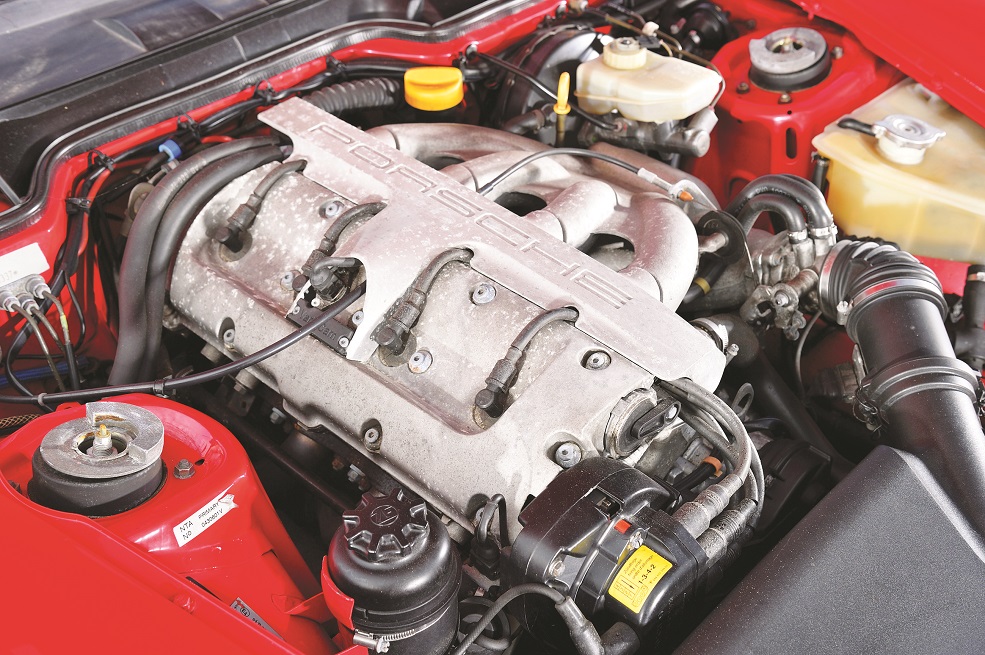 Steering wheel mounted paddles allow gears to be selected manually by the driver without the operation of a clutch pedal. We would argue that the manual box is much better as the Tiptronic boxes of this era can act a little lazy, being essentially a regular automatic. The gearchange on the six-speed is magnificent and gives a glorious satisfaction when pressing on.

The chassis is a delight with a near-on perfect weight distribution and very stiff characteristics helped by the torque tube connecting the engine to the gearbox, aiding rigidity. The 968 benefited from the 911 parts bin, too, which helped its driving dynamics. All-round independent suspension, MacPherson struts up front with semi trailing aluminium arms at the rear using torsion bar springs and separate dampers add to the cornering abilities of the 968.

Porsche brakes have always been the envy of most road sports car manufacturers, as this is usually where sports cars start to fail; no matter how fast they are in a straight line if you can’t take a bend at the right safe speed then you can’t use the car’s speed. The 968 carried forward this important philosophy with little or no discernible fatigue even under harsh use. Self-ventilating discs, open ventilation alloy wheels and a study of the air flow around the discs contributed to more than adequate cooling and so minimal fatigue and brake fade.

Of course, on the road you’re never going to trouble a set of brakes for fading, but this is important for track use and even more-so on the Sport and Club Sport models, given its lenience towards track use. ABS adds even more safety to the already excellent braking system.

Luckily for Porsche owners, Porsche has parts readily available for most classic vehicles. All parts can be found in an official 968 parts document easily accessible via its website, listing part numbers and sometimes cost.

The introduction of 3D printing has also enabled previously unavailable Porsche parts to become available; using modern technology to continue the life cycle of classic cars, we can’t think of anything better. 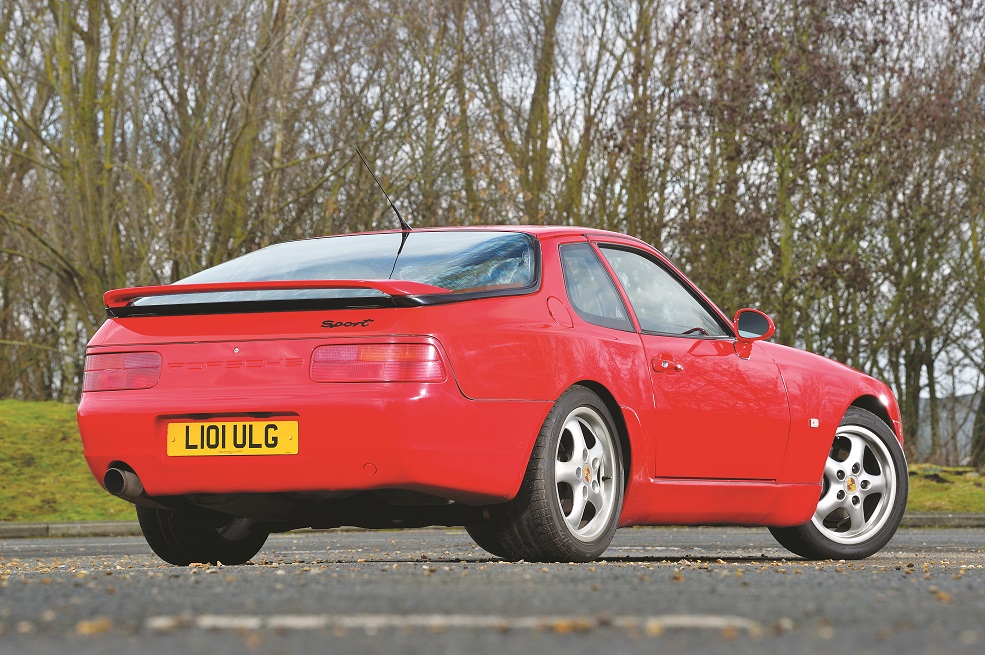 As we’ve mentioned previously, much of the 968 is taken over from the 944, or is at the very least a development of it, even though Porsche claimed tat 80 per cent of it was new. This is a benefit for potential 968 owners as the number of 944s on the road is much more substantial than 968s and there are plenty of cars being stripped for parts on sale. The other benefit of it being very similar to the 944 is that Porsche made every effort to fix the common problems for the 968; as a result, you’re getting a car that’s right at the end of its production life-cycle and therefore suffers less from the common problems.

To buy one, potential owners should realistically budget anything from £15,000 upwards. The rarity of the 968 has driven prices higher, particularly in comparison to 944’s that can be had for less than £10,000. That being said, owners who have made the switch from 944 to 968 have praised the 968’s abilities and concluded the jump was worth it, particularly when considering its rarity. This particular model that we drove was for sale with Purser & Luxford for £26,995.

For potential owners, the 968 Owners Club is active and has affiliation with Porsche Club GB, both of which will have a wealth of information to put minds at rest. You’ll also meet like-minded people with enthusiasm towards the 968, who plan out regular drives and meets.

The 968 Sport we drove was built in 1994 and had covered 79,000 miles. As mentioned above, the Sport variant is essentially a Club Sport but with luxuries, which tells when driving. The 968 feels unmistakably Porsche in the way it drives. In fact, it’s not all that dissimilar to a 993 911 of the same era. The 993 is sharper and ultimately quicker, but the dynamics are very similar. Porsche had done a great job at balancing the weight across the car, despite being front-engined. It would appear upon inspection that the long nose would contribute to a heavy front end that droops under braking.

However, when you lift the bonnet you’ll notice just how far back the engine is placed; it’s almost front-mid-engine in its layout. The low nose accentuates the length of the bonnet to give it the GT appearance; in some ways it complements the rest of the car. If you look closely from the front towards the back, the lines push your eye-line naturally towards the rear.

Today, 240 bhp isn’t a particularly strong figure, but given there are very few occasions you can actually use the full amount of power, 240 bhp is more than enough to enjoy yourself without breaking the law, crucially. Performance feels strong in the 968 though, to the point where you never feel like it ultimately needs a bucket load more power. The power band is progressive throughout the entire rev range thanks to its VarioCam camshaft and a healthy 225lbf.ft of torque and the throttle response is textbook without the intrusion of a turbo. Gearing ratios in first and second are fairly short which help it with acceleration while third feels much longer by comparison. 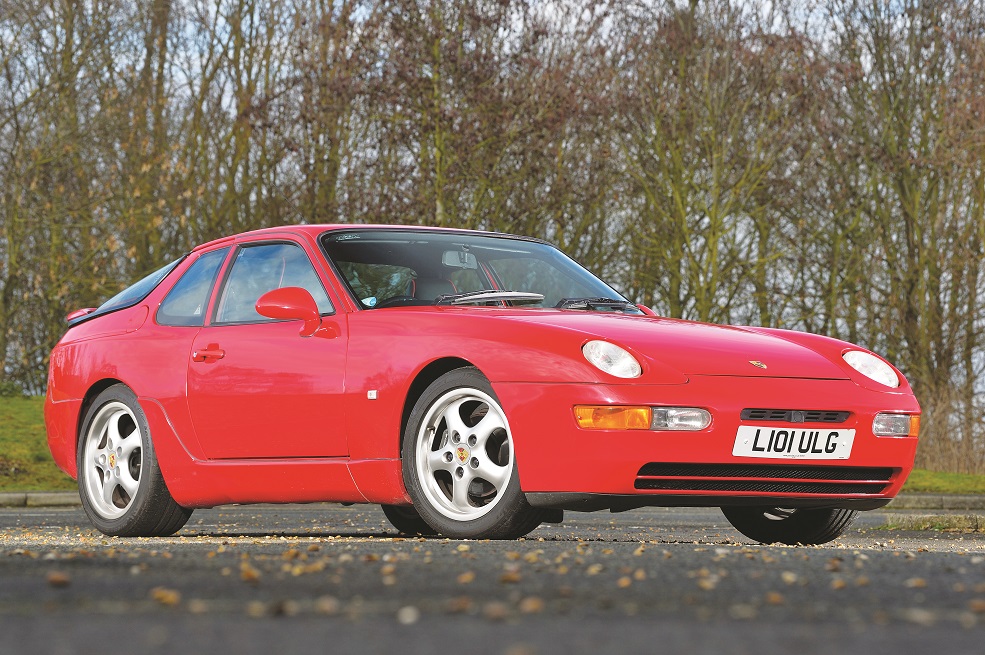 I found myself using third gear for most corners because of the length of it, with fourth and above for longer straights and sixth for cruising. The six-speed is welcomed as in fifth at 70mph you’re creeping towards the 3000 rpm mark, where sixth brings the revs back down to a healthier 2000ish, helping with economy.

The ride is somewhat compromised with stiffer suspension to aid cornering; however, when you do attack the corners it all fits together nicely. Again, it’s not as sharp as a 911, but it does a good job of bridging the gap between GT and sports car. In fact, it balances the two very nicely and, arguably, the compromises in performance are more than made up in practicality, which compromises the 911. You could go as far as to say that it’s the perfect balance between the two.

As I pieced together quiet B-roads, the car brought out another personality that I’d not experienced when carefully driving it through its warm-up cycle. It wanted to press on and felt very comfortable doing so. It felt as light as a hot-hatch while being much more capable in between the corners. Like I mentioned before, 240 bhp is more than enough to experience foot-to-the-floor driving without the risk of exceeding the speed limit.

Press on the brakes on arrival at the corner and dip the throttle down the gears and changes slot into place beautifully. The synchro is delightful in this and will leave you wanting to continue pressing on.

As a modern classic the rarity, performance and the practicality of the 968 Sport are all plus points in its arsenal. The cost can put off potential owners who want the shape of the front-engine, rear-wheel drive Porsches, but the differences in performance and ability bridge the gap between this and the much cheaper 944s. Given it’s the last of the front-engined rear-wheel drive sports cars from Porsche and you can bag yourself a pretty piece of Porsche history. Look at the 968 as a cut-throat 911 with added practicality and you’ll immediately look at it as a brilliant buy.