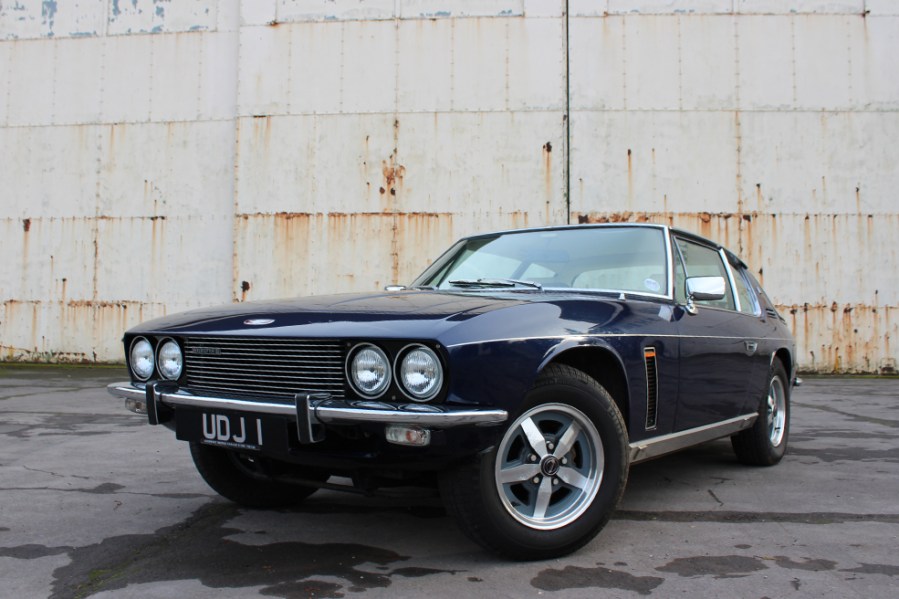 The Jensen Interceptor is handsome, powerful and brimming with character. Here’s how to buy a great example of this Anglo-American 70s GT

Arising from the midst of heated fractures at board level, the Jensen Interceptor had a rocky start to life. However, that didn’t stop it going on to become one of the company’s – and Britain’s – most fondly remembered grand tourers, despite what was at times a tortured existence thanks to its manufacturer’s financial woes that ultimately led to its demise.

The Jensen’s distinctive Carrozzeria Touring-designed and Vignale-revised silhouette, which was the root cause of many a boardroom argument, is in fact a large part of the reason why it’s now so beloved. And of course, underneath those angular lines and that utterly unique tailgate, the rest of the car was pretty special too.

The Interceptor shared most of its parts with the outgoing C-V8, which meant that under the bonnet was a mighty 6,276cc Chrysler V8. A revolutionary four-wheel drive flagship known as the FF was offered too, but due to the sums not quite adding up, it was later replaced by the SP – a rear-wheel drive alternative that packed Chrysler’s full-fat 7.2-litre engine instead. In 1971, the ‘smaller’ 6.3 was discontinued, meaning that the standard Interceptor gained the bigger power unit as well, albeit with a single carburettor instead of the SP’s triple-carb set-up.

For the purpose of this guide we’ll focus mainly on the 6.3-litre car, a vehicle that John Pym of the Jensen Owners’ Club has an in-depth knowledge of – although much of the advice will also apply to later models. 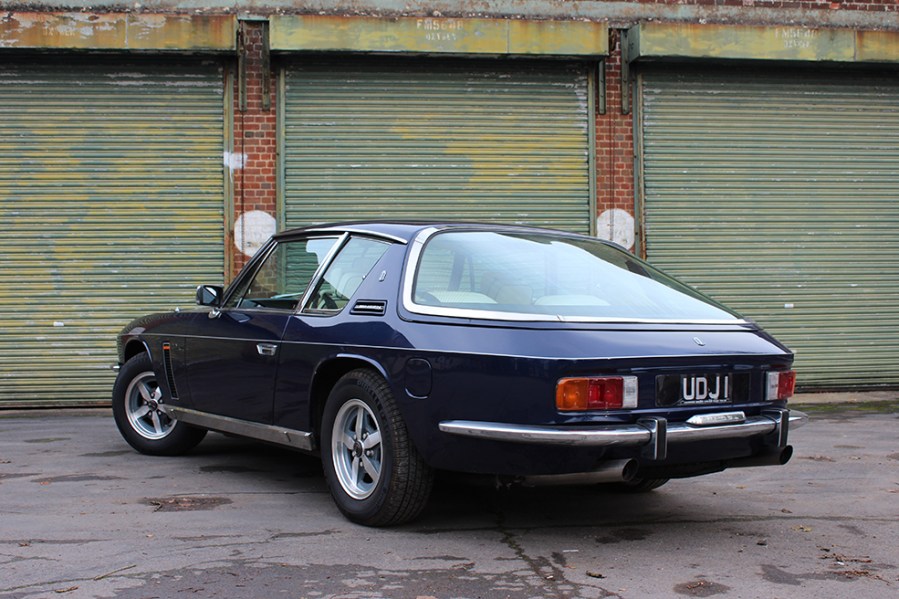 Let’s start off with the biggest (but least unexpected) issue of all: rust. As with most cars of this age, corrosion is something that can affect just about any Interceptor, so you need to be vigilant when inspecting any example that’s for sale. Wheelarches are a common problem area, as are the front and rear valances, but it’s the inner sills that can cause you the most grief, says John Pym: “They’re covered by an outer sill that’s purely for aesthetics, which itself is covered by a stainless steel finisher across the bottom of the car. You’ll need to remove those to get to the inner sill, where water often gets trapped. As it’s a structural part of the car, you’re looking at £4,000 per side to get them repaired if they’ve already rusted through.”

The car’s signature glass tailgate is also something that may be threatened by harsh weather. The entire piece is supported by just two hinges at the top, so if the elements have already begun to take their toll in that area, you’ll need to attend to it as soon as possible.

If you do find that one or two panels need addressing, it’s not the end of the world – although you need to carefully budget for this and take into account the cost of the work when negotiating a car’s purchase price. There are UK-based suppliers for the Interceptor that have access to Jensen’s original presses, and as such there’s rarely a scarcity of replacement parts. That said, one thing that cannot be replaced easily is the roof, so steer clear of examples that have rotted from the top.

The Chrysler V8 is a sturdy engine without too many common faults to note. Minor oil leaks are typical for Interceptors, while the heat of the engine bay can sometimes cause wiring looms to become crusty over time. If either occurrence seems particularly severe, it’ll obviously need addressing.

The carburettor is likely to have required an overhaul sometime in the past 10 to 15 years, so check the car’s history to see whether there’s evidence of this. On top of that, watch out for any debris build-up in the sump; shards of plastic are known to break off from other components over time, which can then end up blocking the oil pump. If you notice that the car is running a bit ‘lumpily’, it may be that the hydraulic tappets which help regulate its valves have got sludged up with residue.

“They’re pretty bulletproof in general though, to be honest,” Pym explains. “It’s fine to run on unleaded fuel, too. Really, so long as the engine’s been well maintained, it shouldn’t cause too many problems.”

As was popular back in the day, the Interceptor makes use of a three-speed Torqueflite automatic gearbox, in conjunction with a Powr-Lok limited-slip differential. The main thing to check is the oil, which should be red and with no ‘bits’ in it; there shouldn’t be any leaks either. You should also consult the car’s history to see whether the adjoining filter has been changed within the past five years.
“If it’s not shifting properly, you can tighten the bands in the gearbox, but if that fails then you’re looking at a full rebuild, which is about £1,500,” Pym suggests. “They don’t cause a lot of problems if the oil and filter have been changed, and most will have had a rebuild over the past fifty years anyway.” 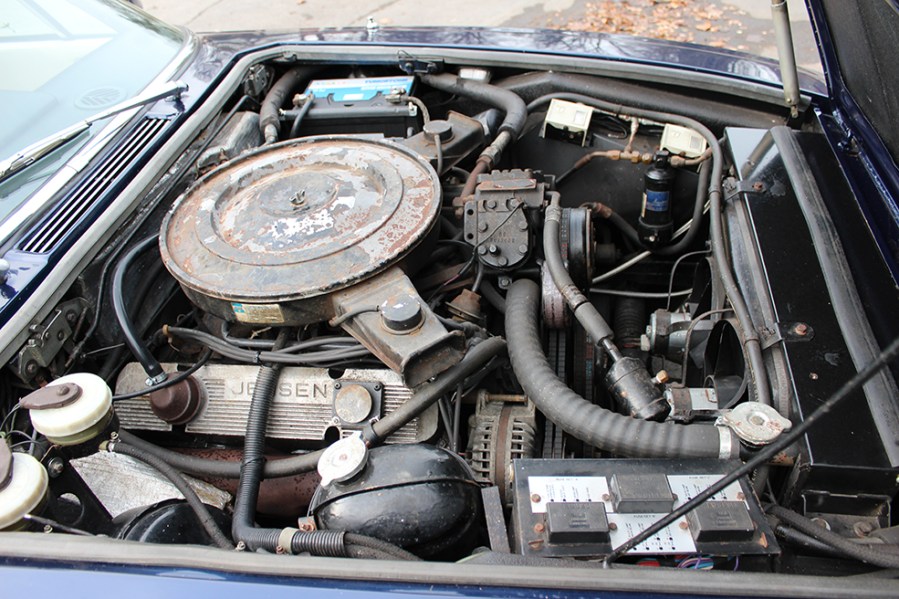 At the front of the car, you’ll find a set of double wishbones with springs and shocks, while at the rear there’s a solid live axle on leaf springs. “The leaf springs at the back tend to flatten out under the weight of the car,” says John, “so you should either get new leaf springs or get them re-tempered if that’s the case. You can also buy new shocks for them quite easily. One good trick is to buy coilovers for the back, which takes a lot of the weight off the springs and helps to bring the car back to a level ride height. It also keeps things quite level under acceleration as well, whereas the standard set-up can cause the car to lean back.”

One particularly advanced aspect of the Interceptor for its age is the braking system. Even the earliest examples have discs all-round, while the brakes on later cars were even ventilated. Check that the discs and pads aren’t too worn, and it’s also worth having a look at the state of the hoses and lines.

The Interceptor is a four-seater, and quite commodious for what is an upmarket sporting GT. “Once you’re in the back it’s quite comfortable, but there’s not a huge amount of legroom if the driver is quite tall,” admits Pym. “As a driver though, the Interceptor accommodates all sorts of sizes and frames, thanks to lots of adjustability. I know two owners who are six feet, six inches tall and they have no trouble with it.”

As for what to look out for, general wear and tear is the main factor here. The driver’s seat can wear along the bolsters and the foam will go flat over time. But like the bodywork, most parts are available to buy new, so it’s not too much of an ordeal to find replacement materials and furnishings. That said, be prepared for a hefty bill if the necessary repairs are rather comprehensive. “To have it retrimmed, you’re probably looking at £5,000 to £8,000,” Pym warns.

If the dashboard is damaged, this is one element of the interior that can be very hard to replace, so be sure to check that the car’s dials and switches are in good shape. Plus, if the car you’re looking at has air conditioning, give it a blast to make sure you’re not facing the £2,500 cost of a new kit. Finally, the tailgate opens via a lever by the door; if that wire breaks, you won’t be able to open up the back of the car, so this is a must-check element of the cabin. 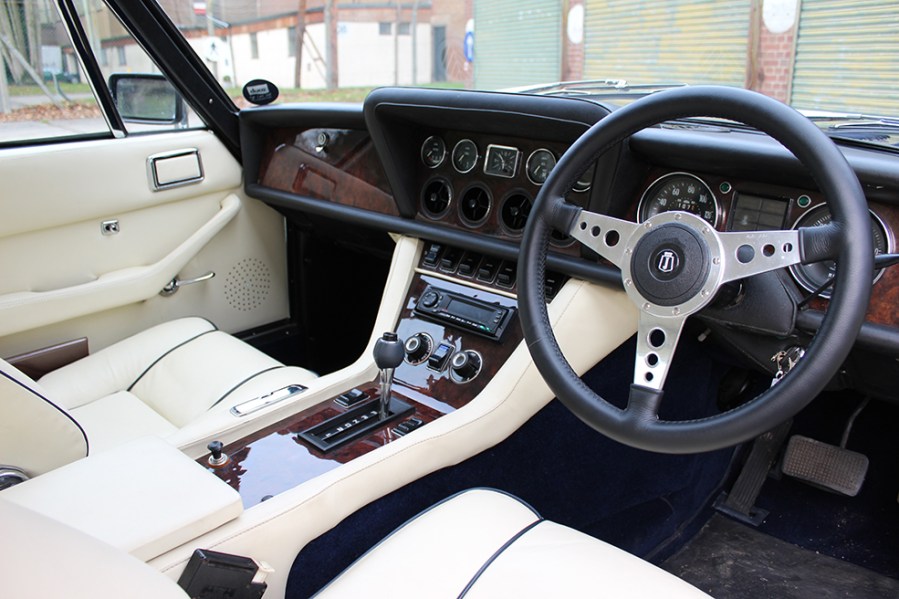 It’s hard not to be drawn in by the Interceptor’s heady mix of reliable, torque-heavy Mopar power under a sleek yet practical body; if you were to have a one-car classic garage, the Jensen Interceptor seems a perfect candidate. It’s an expensive proposition today but arguably offers an experience not easily found elsewhere – and you’re guaranteed to get just the right mix of enthusiastic attention at any car show.

Having proudly owned his Interceptor for more than eleven years, our contact John Pym has built up a wealth of knowledge about what it’s like to run one. “It was a big car in its day, but driving it now, it’s actually quite nimble,” he explains. “You don’t want to be going along B-roads all the time, but it’s fine for driving around town. It’s not a car you’d struggle to live with on a day-to-day basis.”