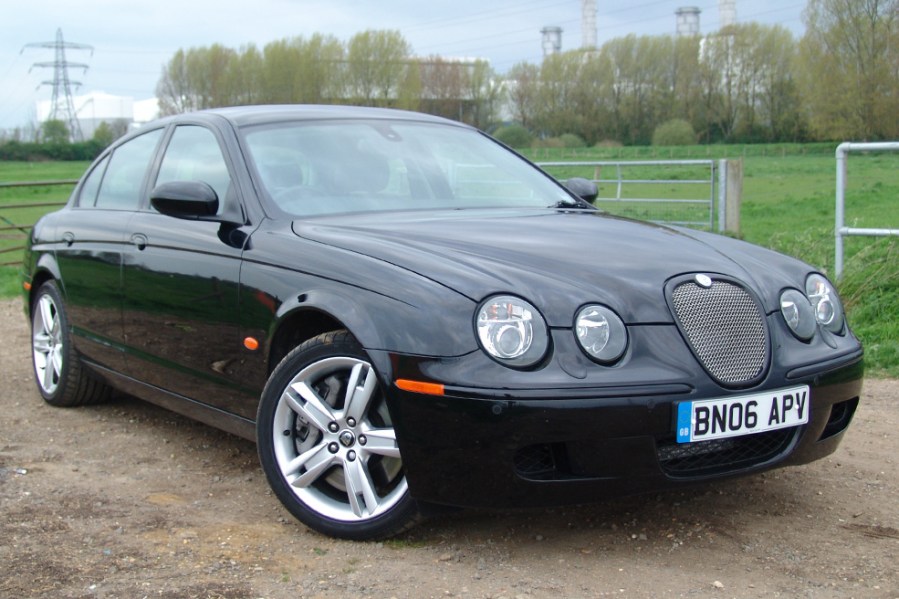 The retro-styled S-Type revived a nameplate last used by Jaguar in the 1960s. We look at how to track down a decent example of these affordable future classics

The original Jaguar S-Type was launched in 1963, taking stlying cues from the chunky Jaguar MkX, and the more svelte Mk2 – one of the most iconic sporty saloons of its age. It could be argued that a retro-styled four-door Jaguar saloon launched in 1999 isn’t really a classic of the same calibre, even if its curvaceous retro styling evokes memories of a legendary namesake.

The S-Type is definitely an emerging modern classic, and early examples, especially those with V8 power, are about as cheap as they’ll ever get. This means now’s the time to grab a bargain; the S-Type is a very capable saloon produced by Jaguar at a time when it was desperate to appeal to a new generation of luxury car buyers.

The development of the Jaguar S-Type (codename X200) can be traced back to 1995, when designer Geoff Lawson cleverly incorporated subtle design influences from the original 60s namesake. These touches were especially evident around the S-Type’s nose and tail area; not everyone was instantly bowled over by the Jaguar’s open-mouthed retro look.

Despite its permanently surprised face, the S-Type received a much warmer reception than it’s earlier namesake did back in 1963, going head-to-head with the likes of the BMW 5 Series and Mercedes-Benz E-Class. The eventual success of its retro styling also helped the case for similarly old-timey designs that would arrive soon after, namely the smaller X-Type and larger X350-generation XJ.

The S-Type was developed during Ford’s tenure of Jaguar and the new model shared a floorpan based on one used by the Lincoln LS and Ford Thunderbird. At launch the new Jaguar saloon was available with either a 3.0-litre Duratec V6 or a 280bhp 4.0-litre AJ-V8 driving the rear wheels through a manual five-speed gearbox, or an optional five-speed Ford-sourced auto.

In 2002 a 2.5-litre V6 joined the line up and the 4.0-litre V8 was replaced by the more powerful 4.2-litre V8. The range was refreshed for the 2003 model year and the slightly modified interior now included an electronic paddle-type handbrake.

The flagship model was the supercharged 390bhp 4.2-litre S-Type R. This 155mph rocket now used a ZF six-speed auto to transfer the power to the rear wheels through a limited slip differential.

The introduction of the diesel resulted in the 2.5-litre V6 power unit being gradually phased out, although a few high-spec special editions used up any remaining 2497cc engines. The facelift included alterations to the layout of the interior and from early 2007 another revamp resulted in standard models receiving the bumpers and stylised grille from the high-powered S-Type R.

Production of the retro-styled S-Type eventually came to an end the following year with the introduction of the Ian Callum-designed Jaguar XF, a model that retained a lot of the outgoing model’s well proven underpinnings.

As would be expected for a quality car built in first decade of the 21st century, the bodywork on late a S-Type should be relatively rust free providing any accident damage has been repaired properly. Although it’s a bit like going back to the 1960’s, early examples of this very affordable Jaguar can suffer from rusty sills. It’s not easy to spot a car suffering from this expensive to repair problem, as any rot will be hidden behind the full-length plastic panels covering each sill structure.

When inspecting an early S-Type, it’s very important to take a good look underneath the car and pay particular attention to the area behind the front wheels by and noting the state of the metal inside the plastic covers. The seams can start to rust behind the plastic panels and it’s not uncommon to find cars with advanced corrosion in these areas.

Another area to check is the boot floor, as a faulty rubber seal will allow water to get into the oddly shaped boot and settle in the spare wheel well. It’s also a good idea to feel along the bottom of each door card and check for any signs of moisture. A missing or torn plastic door membrane will let water into the car via the bottom of the door card and in really bad cases this will result in damp carpets and a musty smell inside the car.

While looking around the engine bay, don’t forget to inspect the condition of the lower chassis legs, inner wings and front slam panel for any sign of poorly applied overspray indicating previous accident damage. 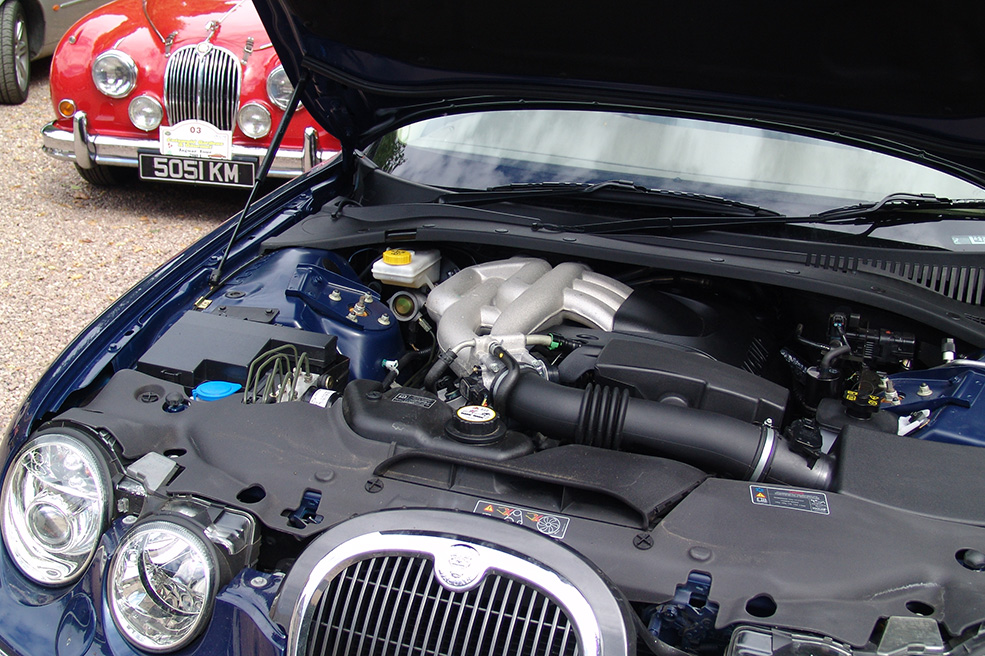 The S-Type is mechanically strong when it comes to engines and gearboxes providing the oil and filter has been changed regularly. An annoying problem that affects the V8-powered R is the coolant pipe running underneath the supercharger, as this can fail and dump the contents of the radiator into the engine bay. Although a new pipe only costs £20, it requires the supercharger to be removed to access the area, so check the engine bay carefully for any fresh anti-freeze staining.

While looking around the engine bay, check the area under the coolant reservoir as the plastic tank can leak. The sump gasket on the Ford Duratec V6 engines can leak and this will show up with a stain on the drive as well as a burning oil smell while on the move. The water pump can fail and the first sign that all’s not well is when the temperature gauge starts to climb and remains high.

Exhaust gas recirculation valves can fail on V8 engines and this can cause the engine management light to come on and produce exhaust leaks and odd smells in the cabin. A loud rattle at the top of the engine will indicate a noisy timing chain or that one of the tensioners has seen better days – a problem that’s quite common on V8 engines produced between 1999 and 2001.

If the engine misfires, it’s probably due to a failing coil pack on one of the spark plugs. This can be an expensive repair, as the inlet manifold has to be removed to access the rear bank of plugs. Diesel engines on late models are fitted with a diesel particulate filter and if the DFP light on the dashboard stays on after a long, fast drive the filter will need to be manually force cleaned by a Jaguar specialist.

Manual gearboxes are tough, although the clutch can feel heavy on some variants and the action of the J-gate selector on automatics can get sloppy over time. If the speedo fluctuates on cars fitted with a six-speed auto box while the engine’s cold, it could be a sign that the gearbox has a major problem looming, although reprogramming the ‘box sometimes cures this problem. 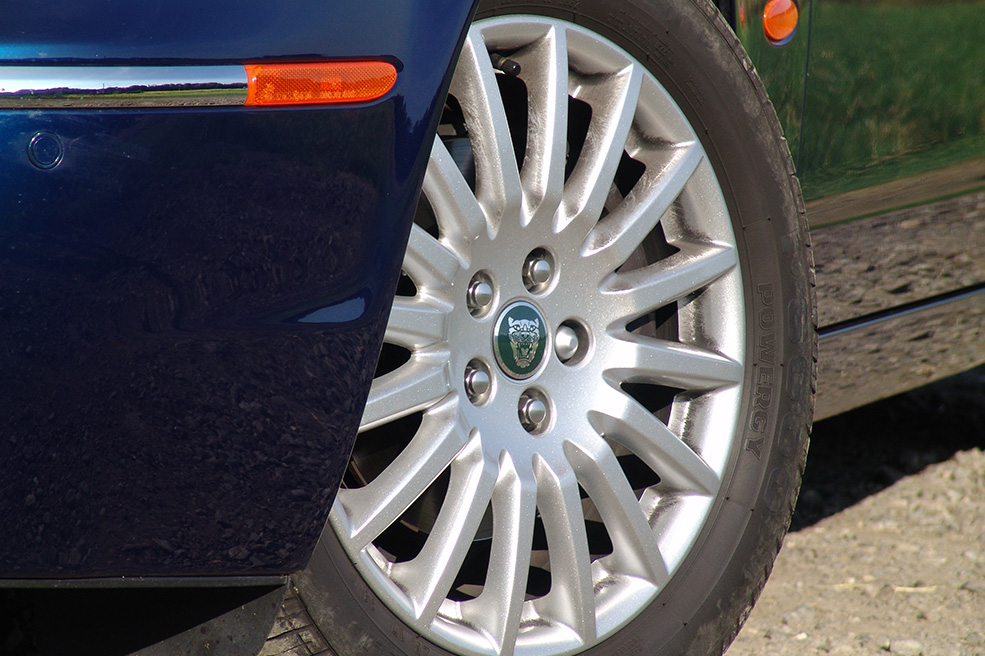 The S-Type’s independent suspension is generally hard wearing but any knocks and bangs coming from the rear while on the move will be down to worn bushes in the linkage. This can also be detected by a slight ‘shimmy’ from the rear end as the car brakes hard. The rubber bushes in the front suspension arms can wear, as can the upper and lower swivels. Clonks and bangs coming front the front suspension could be down to a broken spring or damaged strut bearing and is an easy DIY fix.

There was a recall in 2000 for very early cars to check the front lower ball joints, as some had failed due to a high load fracturing the first thread of the ball joint. Power steering pipes can wear and start to leak, so check the level of the fluid in the reservoir along with the condition of all the visible pipework leading to the steering rack. Any roughness felt through the steering wheel while on the move will mean the steering rack is on the way out.

The S-Type is fitted with four powerful disc brakes and from 2002 all models were fitted with an electronically operated handbrake. This arrangement can be problematic on high mileage cars, as the sensitive handbrake servos located on the rear calipers can seize, so it’s important to carefully check the operation of the handbrake on cars fitted with this system.

While checking the condition of the wheels and tyres, take a look through the wheel spokes at the discs and negotiate a discount if any are scored or badly corroded. While driving the car, make sure the ABS light on the dashboard goes out as a damaged or corroded sensor ring on one of the wheel hubs will show up as a fault and the system will be disabled. 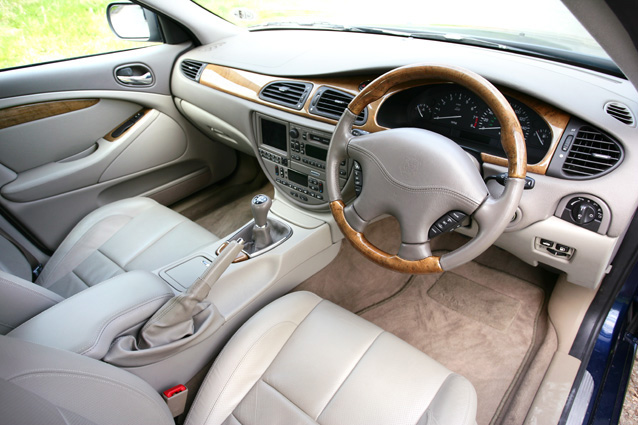 There’s plenty of wood decorating the S-Type dashboard and door cappings, although the sporting models all feature brushed aluminium trim rather than timber. Entry-level S-Type models have part cloth seat facings, while optional leather is standard on top of the range models. Interiors wear well, although the padded side bolster on the driver’s seat is prone to wear.

While test-driving the car, make sure all the switch gear, such as seat motors, door mirrors, sliding sunroof (if fitted), electric window winders and central locking, works correctly and that there aren’t any intermittent faults with any of the electrics. If the air-conditioning isn’t working, the system may benefit from a re-gas, but if this fails to cure the problem could be down to a faulty clutch on the compressor or a faulty relay. On cars fitted with climate control, set the passenger’s side to cold and the driver’s side to hot and make sure the temperature of the air exiting the vents matches the controls.

A loud ticking noise coming from the dashboard area while the car’s idling is probably coming from the air mix motors and these will have to be replaced to cure this annoying problem. Finally, turn the headlamps on and make sure all the bulbs light up. Replacing a blown bulb requires double-jointed wrists as access is  very tight and some headlight systems include high voltage ignitors, so seek advice before diving in.

Although there’s a Jaguar badge on the bootlid, parts for a Jaguar S-Type aren’t too expensive thanks to the marque’s Ford heritage. A lot of the switchgear, under bonnet sensors and electrical relays will be familiar to anyone who’s driven or worked on a Mondeo. Specialist suppliers such as David Manners, SNG Barratts, JustJags and Rimmer Brothers all stock a comprehensive selection of spares, such as brake discs and pads, suspension components and mechanical parts as well as the usual service items for all S-Type variants. 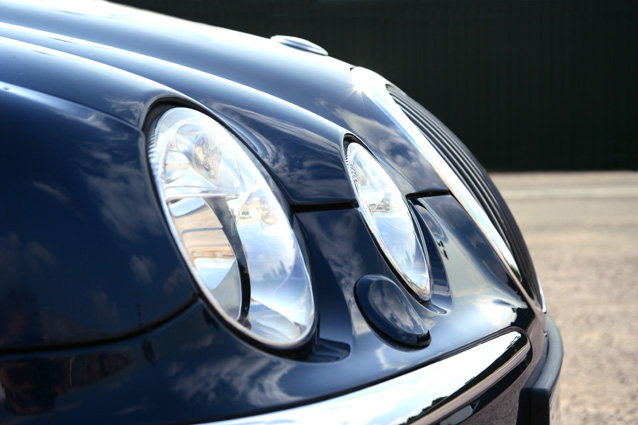 The Jaguar S-Type is definitely in the fast lane regarding classic status, although it will be some time before prices for these cars start to rise. Now’s the time to grab a bargain and there are certainly a lot of reasonably priced examples to choose from. There’s not too much to worry about under the bonnet as the engines on these cars are strong, chain driven units and are capable of interstellar mileages providing an excellent service history is kept up.

Don’t be put off by modern electrics, as working through any problems indicated by illuminated dash warning light can be quite logical and well within the capabilities of anyone used to working with with classic wiring.

A useful addition to the tool kit for a new owner is a code reader that plugs directly into the S-Type’s OBD2 port. Decent ones can be picked up on Ebay for under £50 and understanding the codes they throw up are a essential starting point when it comes to diagnosing faults on modern classics like the Jaguar S-Type.