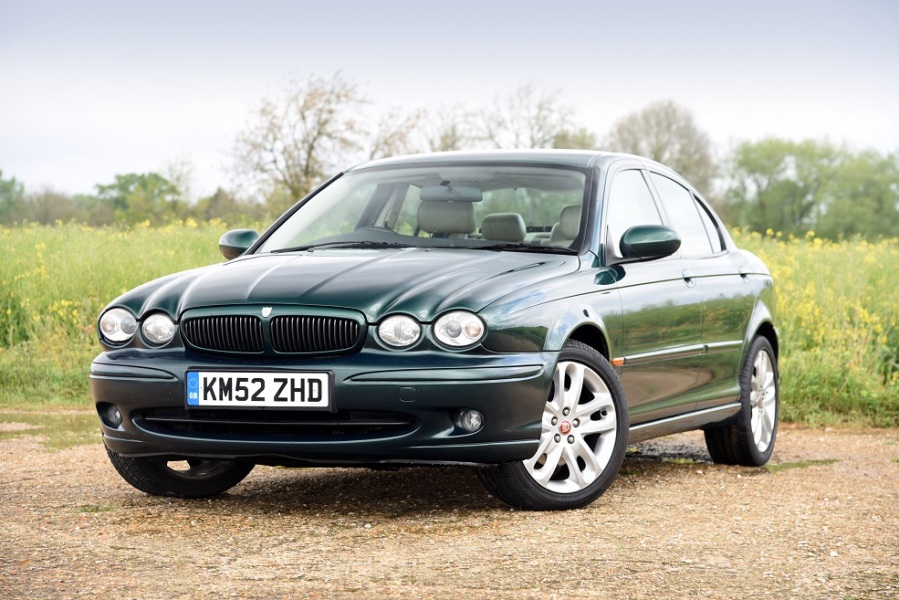 The smallest Jaguar makes an affordable and practical modern classic – but it does have its pitfalls. Here’s what you need to know when buying a Jaguar X-Type

With the earliest examples just about to reach their 20th birthday, the Jaguar X-Type is old enough to qualify for modern classic status – something reinforced by its significance to Jaguar and its continued survival as a brand.

One of Ford’s key aims for Jaguar during its ownership was to lift production over the 100,000 mark; this was achieved with the Jaguar S-Type, but Detroit management was keen to raise the bar even further by adding a smaller model to challenge the BMW 3 Series.

That was all fine in principle but not quite so easy in practice, as all the smaller platforms within the Ford empire used a transverse engine allied to front-wheel drive, which simply wouldn’t fly as a Jaguar product. The only credible choice was the CD132 platform, as found under the 2002 Mondeo, which was comprehensively re-engineered by Jaguar including the addition of four-wheel drive to avoid the stigma of a front-driven Jaguar – although these did appear in the range.

The front suspension was revised, while in the conversion to all-wheel-drive the rear end received what was essentially the independent rear set-up developed for the Mondeo estate. In the Ford this was used to give the estate a flatter load area but in the X-Type it allowed a rear subframe and differential to be added for rear-wheel drive. 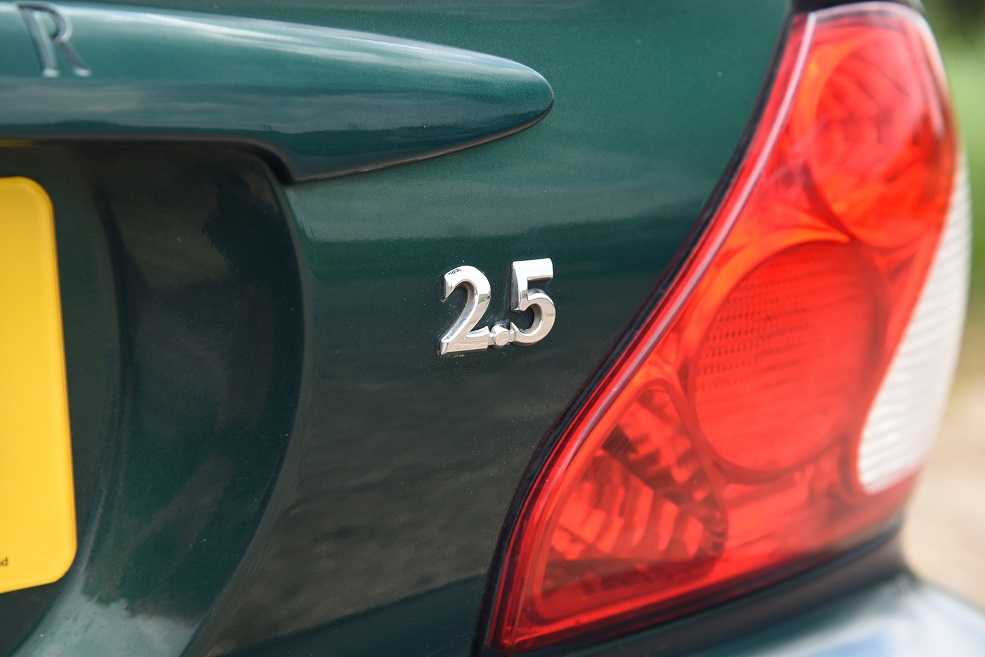 The four-wheel drive system used a separate transfer box with a viscous coupling to send drive to the rear wheels, the car retaining a rear-biased torque split. Engine options initially included 2.5 and 3.0-litre versions of the Duratec V6, joined by a smaller 2.1-litre V6 (badged as a 2.0-litre) in 2002 as a front-drive only offering. Meanwhile, the first four-cylinder Jaguar since the days of the SS models appeared in 2003 in the shape of the X-Type diesel. Using the 128bhp 2.0-litre unit from the Ford Mondeo TDCi, it was available only in manual front-drive form, while the estate joined the range in 2004.

In 2007 the diesel option was upgunned to a 2.2-litre, 152 bhp option which transformed its performance and with a facelift the X-Type continued to sell in reasonable numbers until it was axed in 2009 when the Halewood production line was earmarked by Jaguar Land Rover for the new Range Rover Evoque. Jaguar wouldn’t return to the compact executive market until the launch of the XE in 2015. 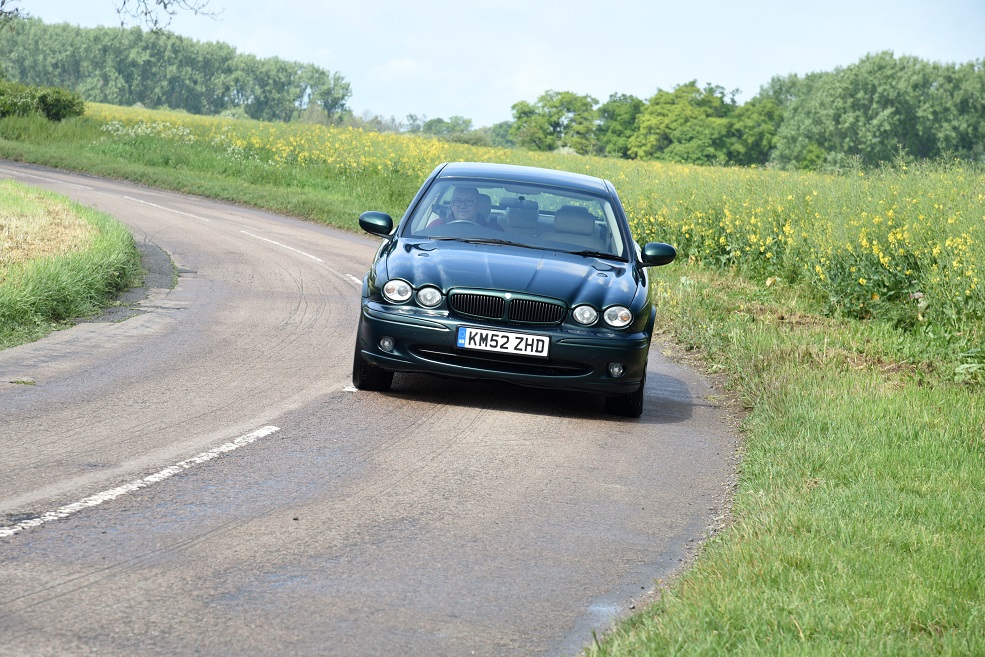 The diesel still commands something of a premium but the higher potential maintenance costs make it one for drivers doing bigger mileages, while the oil-burners were offered only in front-wheel drive form meaning they don’t come with the handy winter traction advantage.

All of which makes the V6-powered cars the ones to have, and in either 2.5 or 3.0-litre form, the Jaguar X-Type is a very capable car. Yes, you can spot bits of Ford-derived trim and switchgear here and there, but the same goes for a contemporary Aston Martin and the Mondeo platform was in truth a very good place to start.

The Duratec V6 is a tremendous engine, smooth and largely reliable, too. It’s perhaps at its best in 3-litre form since the 2.5 needs working that bit harder, especially with the automatic box and a nicely maintained Jaguar X-Type is a pleasurable way to travel.

They’re cheap right now, too – yet it’s one of those cars which still looks presentable even in bargain basement form, a testament to the quality of paintwork and the type of owner they tended to attract. This can make the X-Type something of a best-kept secret, but they can still bite you. 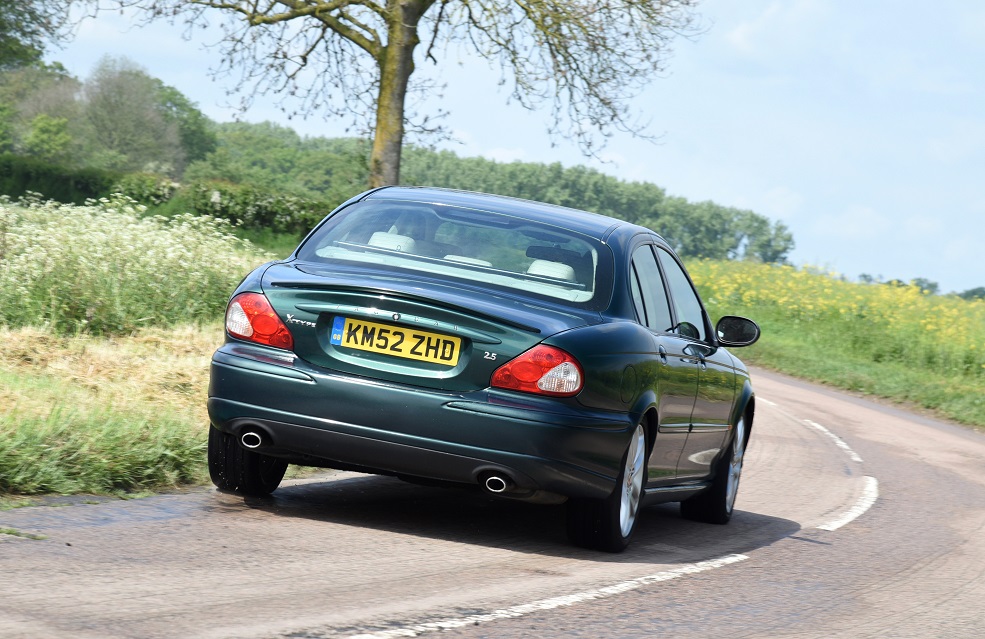 The Jaguar X-Type was a well-made car, and in fact the Halewood plant won awards within Ford for the quality of its paintwork, meaning that even neglected examples will regain a lustrous shine with a proper buffing. External trim is generally long-lived too, while cloudy plastic headlamp lenses can be polished up successfully. The bumper skins are held in place by a series of clips and can easily be dislodged in parking misadventures, meaning they look lopsided but removing and reinstalling them properly is straightforward DIY – and usually successful even with one or more broken clips.

Your biggest issue will be the spectre of rusty sills. The issue is that they’re hidden by plastic covers, making inspection tricky since the retaining clips invariably break when they’re removed. In extreme cases this can mean welding work equal to the value of the car, but you can equally get lucky and find a car with solid sills. Checking the car’s MoT history together with some judicious feeling and prodding is sensible. In the worst case, repair panels are available from Jaguar specialists for a neat repair.

Headlights can suffer when the adjusters break up, leaving the bulbs unsecured but the units can be split with a heat gun and plenty of patience before being rebuilt with new higher-quality adjusters. 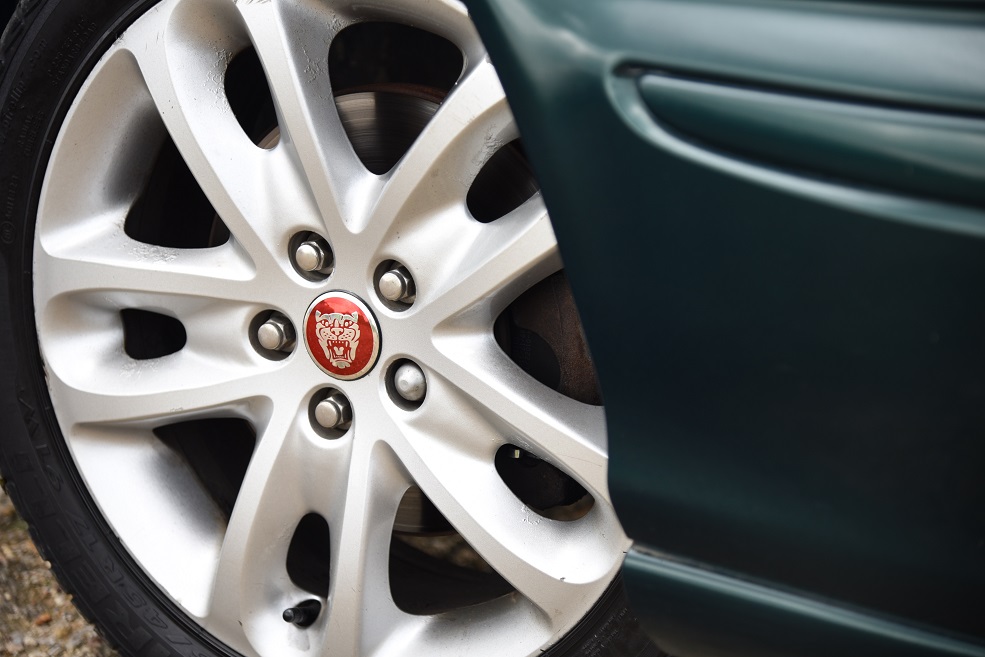 Both manual and automatic gearboxes are robust and problems will be obvious. A whirring or grinding from the propshaft area which may come and go, will most likely not be the gearbox but the propshaft bearing which was a common issue even when the cars were new. It’s an easy DIY replacement but many owners have found that simply slackening the mounts and moving its position very slightly can solve the issue.

A side-effect of the Mondeo platform being designed for front-wheel drive is that the structure didn’t leave much room for the four-wheel drive hardware, and as a consequence the transfer box is on the small side. This means a correspondingly small oil capacity and the slightest leak will leave it running perilously low. Draining and refilling the transfer box can extend its life greatly, but since there’s no drain plug provided and even workshop vacuum drain kit won’t get it all out, the official solution is to tilt the car to a crazy angle. This is easy enough with a workshop lift although tricky to do safely at home but is well worth doing. Some owners have had the casing modified to accommodate a drain plug to facilitate regular changes. 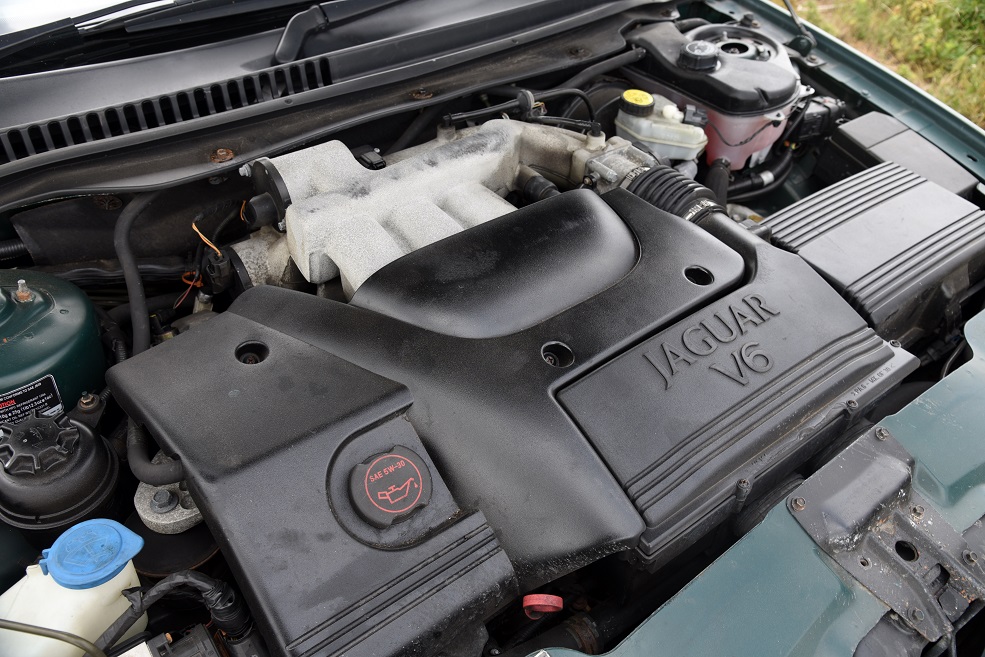 The Ford-derived Duratec V6 is a known quantity and really very reliable, with problems generally down to the componentry surrounding it. Oxygen sensors are a common issue and many’s the X-Type with the engine management light glowing permanently as a result. There are two of them and the front one is easy to change, but the hard-to-access rear sensor can be a real mission even with the special tool. Similarly, spark plugs are hard to access on the rear cylinder bank so can get overlooked in DIY servicing.

Oil leaks are common and if you notice a smelly heater then check the crankshaft seal which can be accessed through a hatch in the plastic offside inner arch liner.

The diesel is only available in front-drive form and is generally reliable but can get expensive at high mileage, notably when injector problems arise. Given that few people buy the X-Type as a high-mileage car these days, we’d suggest the petrol V6 is the sensible option. 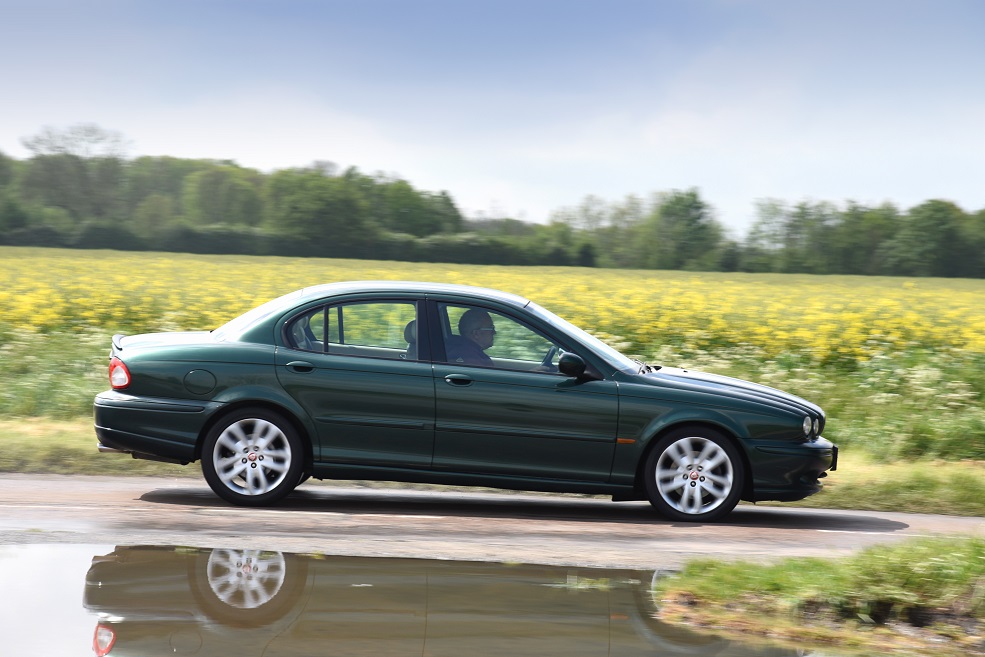 The X-Type’s layout is largely based on the Mondeo, with the rear end based on the Mondeo estate’s space-saving layout. This means that parts like springs, dampers and bushes are all available from stock and regular garages will be familiar with the layout. Creaking from the front can be down to worn top mounts or broken road springs, both of which are common.

There’s nothing much to worry about with the brakes themselves, beyond the usual issues like seized calipers which are easily sorted with exchange units. The ABS system can present more challenging issues though, since the trigger rings are bonded on to the rear driveshafts. When the warning light comes on, the first step is to change the sensor which is a quick and cheap job, but if it persists then the only solution is a new driveshaft.

In general the interiors are well wearing, although the driver’s seat bolsters can suffer on high-mileage cars. If the leather simply looks tired rather than damaged, amazing results can be chieved with leather recolouring kits, while little things like replacement gearshift gaiters are easy ways to tidy up a tired example. The standard-fit stereo doesn’t offer a modern aux input, but for the original cassette unit, it’s possible to solder an input into the cassette deck connection.

If the heater air flow seems poor, it may just be down to the cabin filters which are located under the plastic scuttle trim but don’t always get changed since doing the job involves removing the wiper arms. 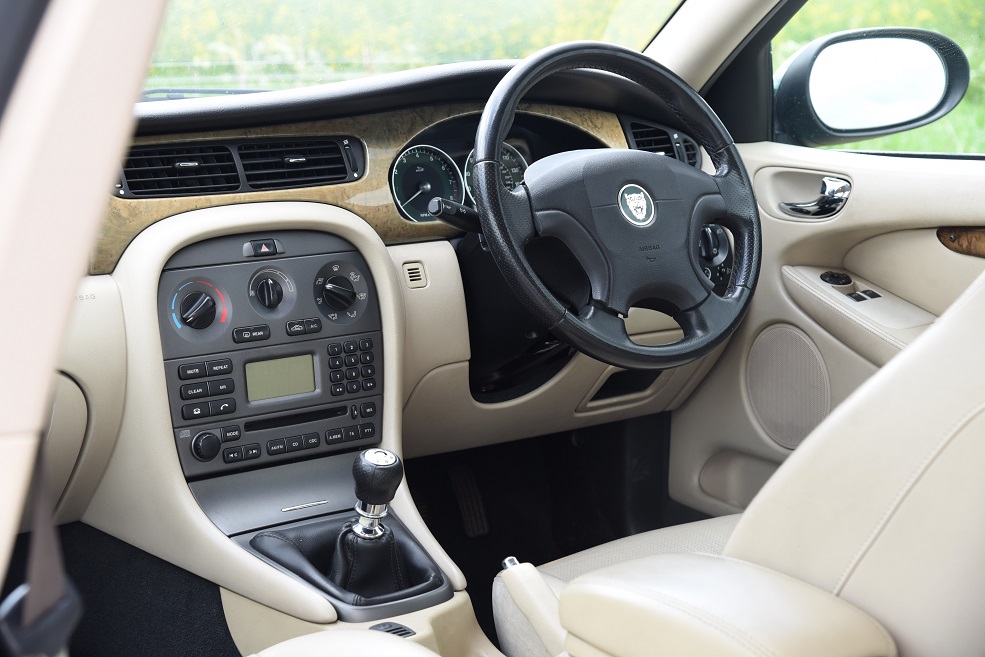 For some years now, the X-Type has been lingering in a twilight zone with a small but enthusiastic following and general indifference from the traditional Jaguar enthusiasts. Unloved by the market and car trade in general, the X-Type is now an astoundingly cheap car – but does that make it a secret gem?

The answer most likely is a resounding yes. It’s not without good reason that many of the classic car dealers rely on an X-Type estate as everyday transport, appreciating its compact size, modern dynamics and easy-going nature… as well as its bargain-bucket purchase cost.