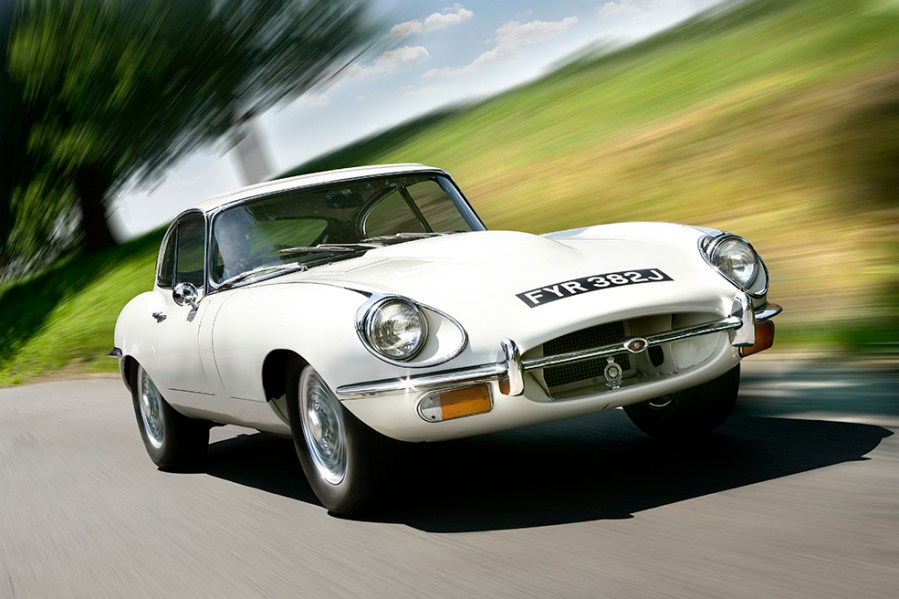 Classic cars don’t come much more desirable than an early Jaguar E-type. Here’s what to look out for

Mention you’re seriously thinking about buying a Jaguar E-type to a group of automotive sages at a pub meet and odds are the discussion will turn to which version would be the better investment – coupé or roadster?

A few will favour the coupé’s stylish roofline and swoon over this sporty Jaguar’s drop-dead gorgeous profile; others will rant on about how the only E-Type worth bothering about would be a Series 1 roadster. We reckon it’s best ignore those comments and make up your own mind.

By the time the conversation gets around to the merits of a flat-floor Series One 3.8 roadster over a Series 1 4.2 fixed-head coupé, its definitely time to call last orders and head for home.

Try and escape before the conversation turns to US safety regulations and how they spoilt the look of the Series 2 – then hopefully you’ll miss the part where cynics start commenting on how the 2+2’s tall windscreen and longer wheelbase spoiled the E-type’s fine lines.

The Jaguar E-type is one of those rare cars that will always get hearts pumping – and opinions flying. This iconic Jaguar is still igniting passions today, just as it did when first revealed to the public back in 1961.

Early E-types were fitted with a triple SU-carburetted 3.8-litre straight-six XK engine. These first-generation ‘flat floor’ coupés and roadsters are easily identified by their external bonnet latches located behind the front wheels; such examples are very rare and expensive, with restored cars changing hands for telephone numbers at auction.

Jaguar introduced the torquier 4.2-litre powered E-type in 1964 and two years later the covers came off the ungainly looking long wheelbase 2+2. In 1967 Jaguar unveiled the tweaked Series 1.5 to comply with US emission regulations and a year later the E-type morphed into the heavily revised Series 2.

It was all change again in 1971 when the 5.3-litre V12-powered Series 3 E-type took over from the straight six equipped 4.2. The Series 3 E-type shared the same high windscreen and long wheelbase as the 2+2, but many enthusiasts thought the car’s profile had strayed too far away from the iconic design of the early six-cylinder version. 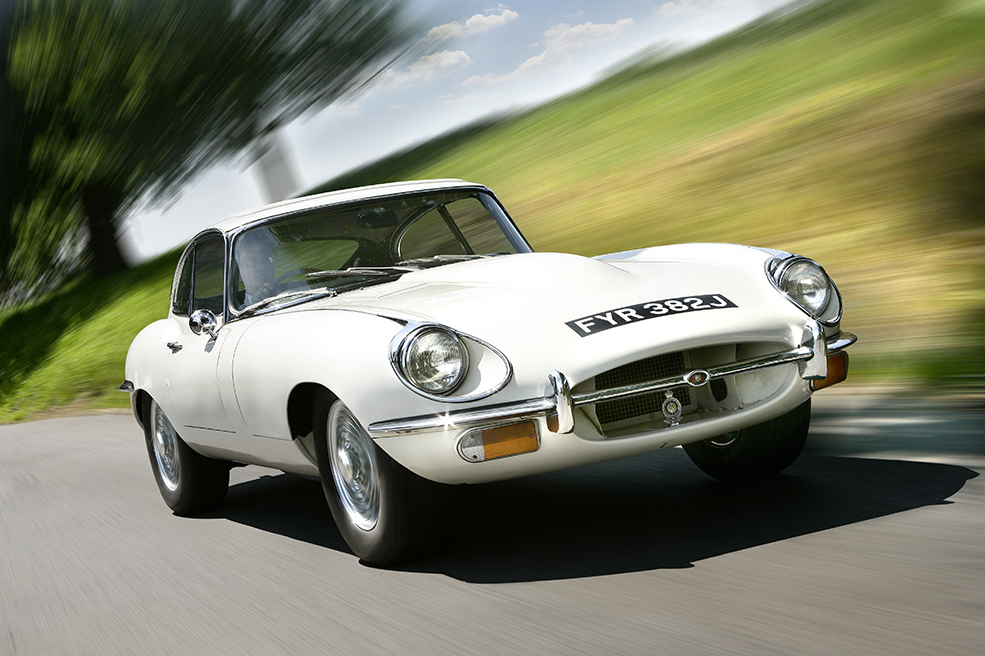 A large percentage of an E-type’s bodywork is made up of a one-piece forward hinged bonnet, which is easily damaged on the leading edge if raised on uneven ground. The bonnet is constructed from several sections bolted together and rust can start in the seams behind the chrome trim.

Other areas to check for rot on a Jaguar E-type are both floor pans – these are especially vulnerable on the roadster – sills, door bottoms, around the rear arches, rear suspension mountings and the boot floor. The tailgate on a coupé corrodes around the seams, bottom edges and the screen aperture and on both versions it’s important to check all the panel gaps are equal, as lead loading is used form some of these.

One of the most important areas to check when viewing an E-type is the condition of the front bulkhead, especially around the mountings for the engine rails.

These rails form an aircraft power plant-style cradle for the XK straight six and are made from Reynolds 541 square section tubing. Corroded rails should be replaced rather than repaired, so be suspicious about the overall condition of the car if any welded repairs are detected. 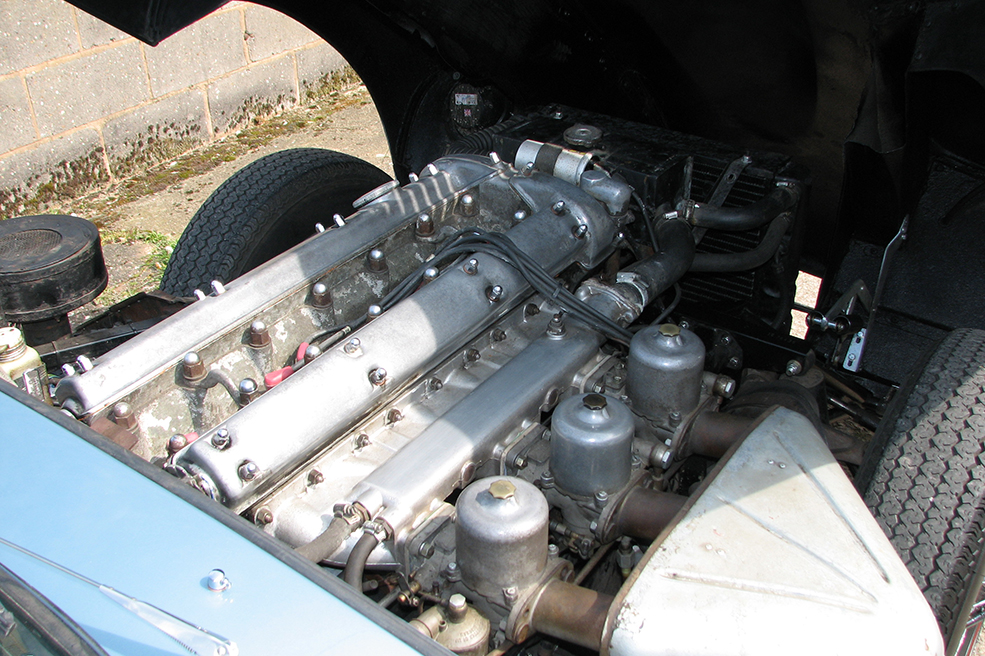 Although the E-type’s straight-six is a tough unit if serviced correctly, these engines can suffer from head gasket failure. Try to inspect the sides of the block for any recent coolant stains and signs of any mayonnaise-type gloop lurking underneath the oil filler cap, which could indicate coolant has mixed with the engine oil.

Any light rattling from the front of the engine will indicate worn timing chains and tensioners. It’s a big job to replace these items on an XK engine, so don’t dismiss this as a cheap repair – there’s no such thing on an E-type.

Rumbling from deep down in the engine will point to worn bearings – oil pressure on a healthy XK engine should be around 40/45psi at 3000rpm. A worn engine will obviously require rebuilding and a specialist repairer will charge a minimum of £6000 to overhaul a rattling XK unit.

Any lumpy running could be down to worn diaphragms in one of the engine’s three SU carburettors. These can be a nightmare to adjust at home and any fettling in this department is a job best left to the professionals. Check the engine for oil leaks but don’t be put off by minor ones, especially from the front and rear crankcase seals. When starting the engine, a slight puff of blue smoke out of the exhaust is quite normal but once warmed up the engine should be smoke free. 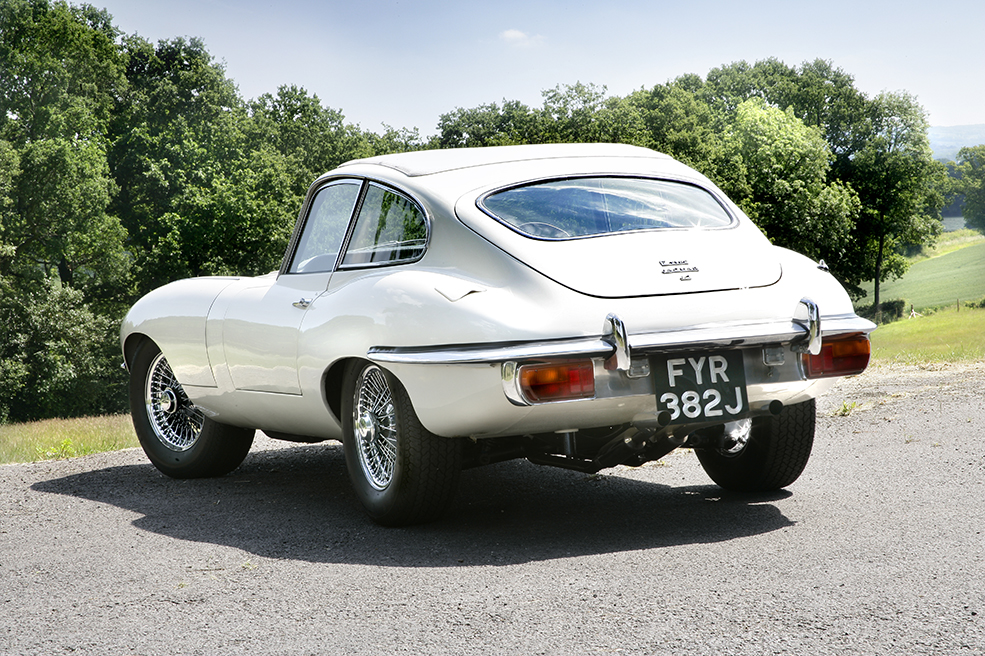 Early E-types are fitted with a four-speed Moss manual gearbox with no synchro on first gear. These ‘boxes are notoriously ‘notchy’ when swapping ratios and finding reverse can be a two handed affair.

Later cars have the smoother Jaguar all-synchro gearbox; transmission checks on these should include watching out for the lever jumping out of gear, especially on the overrun, whining gears and rumbling bearings.

The good news is that all E-type manual gearboxes are as tough as old boots and a noisy ‘box will continue to perform for years before an overhaul becomes necessary.

Check the biting point on the clutch and if the pedal comes up a long way before it bites, suspect a worn clutch assembly. Replacing a worn clutch in a Jaguar E-type is a big job, as the engine and gearbox have to be removed as a single unit and to do this the bonnet will have to come off. Auto ‘boxes should be checked for any erratic or clunky changes and when inspecting the fluid it should be bright red, not dark brown or burnt smelling. 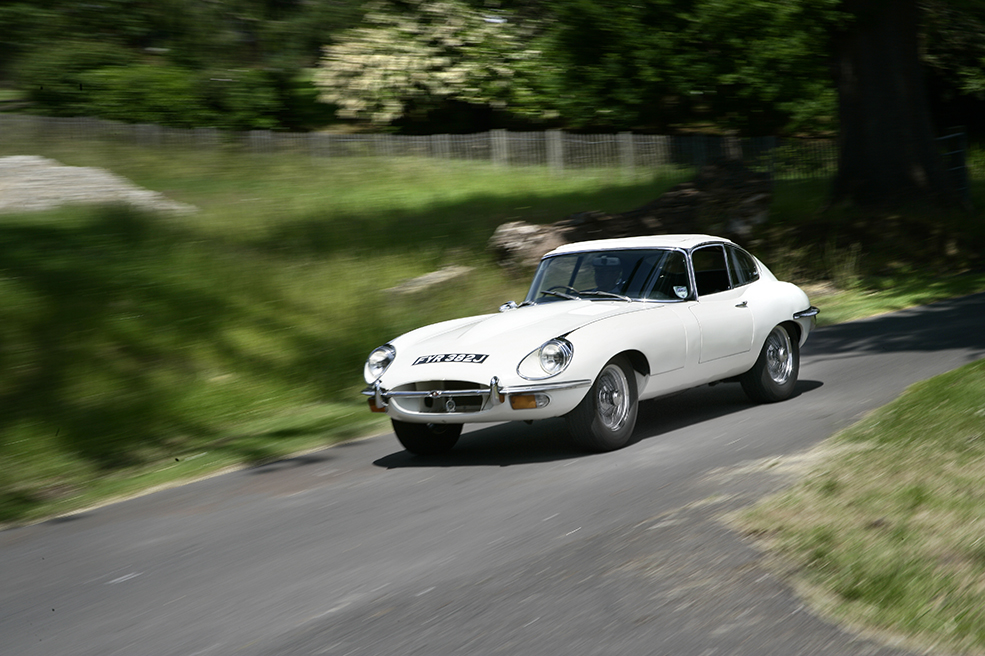 The E-type’s double wishbone front suspension and rack-and-pinion steering is mounted on the lower longitudinal rails supporting the engine, while the car’s complex rear independent rear setup is contained in a pressed steel cage bolted to the floor pan. If it’s possible, jack up each wheel in turn; the first items to check are all the bushes and bearings in the rear suspension.

Worn rear radius arms will make themselves heard when the car travels over rough ground and clunks and whines will indicate wear in the rear drive shafts and differential –budget for around £1000 to silence a noisy diff on an E-Type.

At the front, check for worn steering joints and rock a raised wheel to feel for any excessive play in the lower wishbone joints and hubs.

Worn wishbone ball joints can be shimmied out and a specialist will usually charge around £150 per side for this operation. Checks should also include inspecting the anti-roll bar bushes for wear and the steering rack gaiters for any splits.

If excess play is found in the steering column, this will be down to worn bearings and is a reasonably easy repair. Suspension checks should also include inspecting all the dampers for leaks – there are four at the rear – and snapped coil springs.

The Jaguar E-type has all-round disc brakes which should all be checked for wear. Also watch for calipers and lines that might be leaking fluid. Rear brakes are inboard and the discs are located next to the differential, which makes maintenance very difficult.

To change the rear discs, the rear suspension cage has to be dropped. This is a huge job and to replace the rear brakes on an E-Type an invoice of over £1,200 will be the norm.

When checking the brakes, don’t forget to try the handbrake. It’s self-adjusting on this sporting Jaguar and will seize if not lubricated properly. 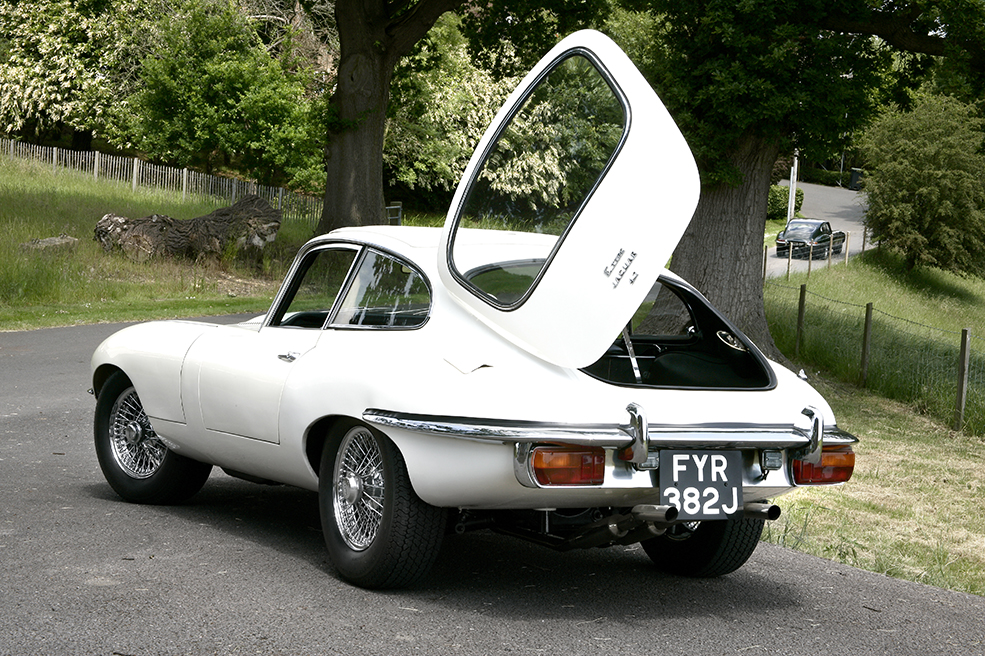 A lot of E-types will be sitting on a gleaming set of chrome wire wheels. Each spoke should be checked and any damaged or loose ones replaced as soon as possible. Check the centre spinners haven’t been cross-threaded or badly damaged after being walloped by the wrong type of hammer and the hub splines aren’t worn.

When inspecting the condition of the tyres, try and locate the date code moulded into the sidewall and budget to replace any rubber that’s past its prime.

The good news is that every bit of hard and soft trim inside a Jaguar E-type’s cabin is available from specialist suppliers. The bad news is that a full interior re-trim for either a roadster or coupé will be a wallet bustlingly expensive exercise.

Don’t dismiss a sound imported car with a tatty cabin though, as E-type prices know no bounds and any expense refitting the cockpit, even it makes your eyes water at the time, should be easily recouped when it comes time to sell the car.

While inspecting the condition of the interior, don’t forget to check all the switchgear works correctly. 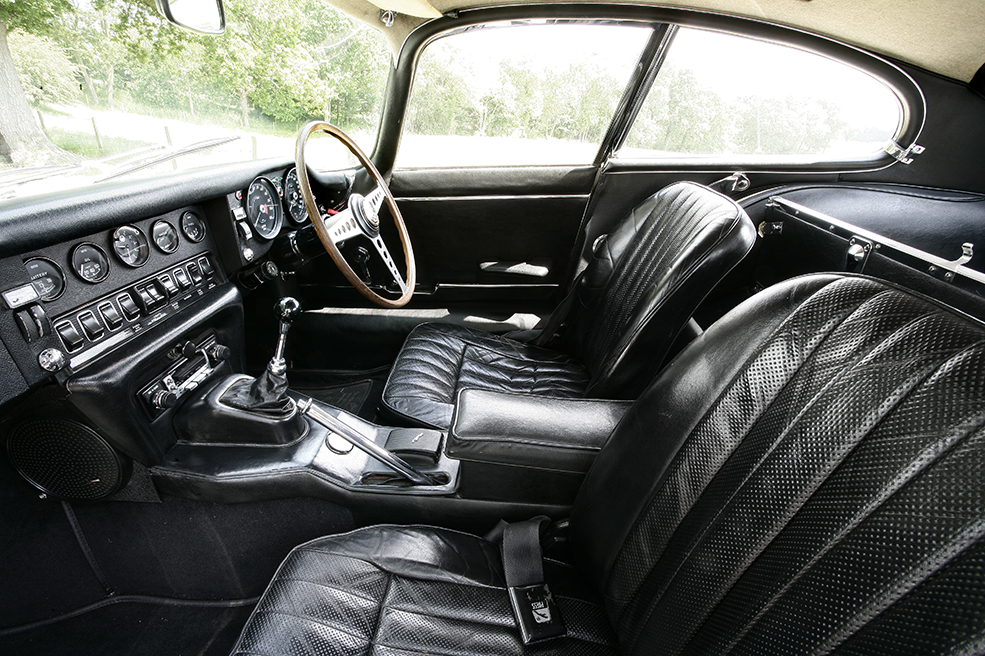 Since prices for Series 1 E-type are now out of most buyers’ budgets, a Series 2 is probably the best buy. These models offer the same glorious view down that long, louvered bonnet and drive the same way as a tidy Series 1.

Later E-types enjoy improved seating and ventilation, which makes them more comfortable and useable but a decent one will still cost a king’s ransom.

We certainly wouldn’t recommend converting your pension pot into an E-type, as values can obviously fluctuate, but if those elusive six lottery numbers ever come up, buying a professionally restored Series 2 Jaguar E-type would be a fun way to make a fairly risk-free investment.