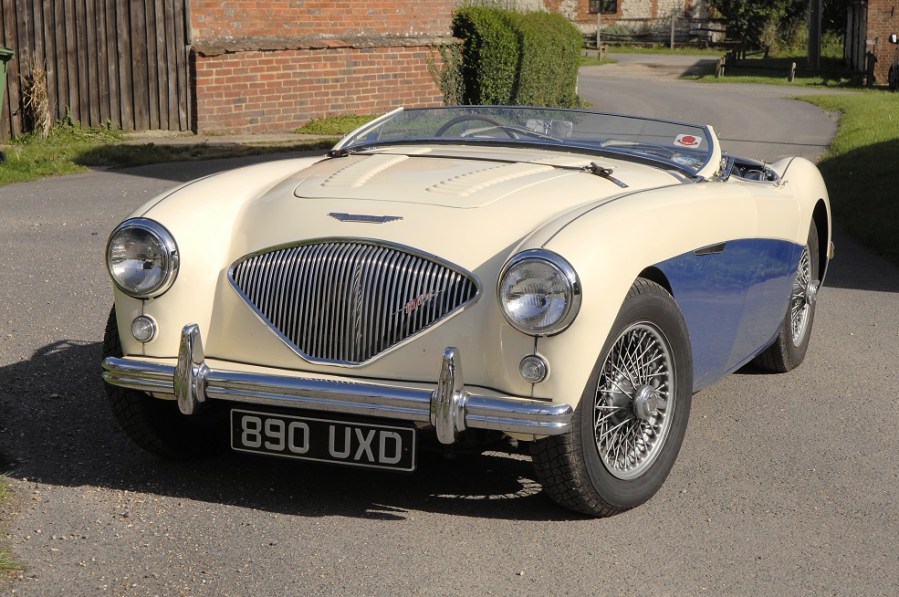 The Austin-Healey 100/4 nearly stopped the MGA story in its tracks. But with more than 65 years of water now under the bridge, which wins out in the battle of ground-breaking British sports cars?

Back in 1952, Leonard Lord held all the cards. As chairman of the newly-formed British Motor Corporation, he had the final say on MG’s proposed successor to the TD range. Unfortunately for the men at Abingdon however, Cornishman Donald Healey had got there first. MG’s plans were subsequently put on a backburner in favour of the Austin-Healey 100, meaning the men at Abingdon had to wait until 1955 to launch the MGA. But now that the dust has well and truly settled, which is best?

Healey’s ‘Hundred’ prototype for the 1952 London Motor Show impressed Lord to the extent that he struck a deal to build it in quantity as the Austin-Healey 100. It used the 90bhp 2.6-litre engine from the Austin A90 Atlantic, but the gearbox was modified to be a three-speed unit with overdrive on second and top. This package gave it a top speed that could surpass the ‘100’ designation, with the original road-test cars clocked at 106mph. It could also cruise at an easy 70-80, making for a very drivable car.

But the real triumph was the bodywork. Healey struck gold when he happened across a young car body engineer called Gerry Coker, who designed a very pretty car that big name Italian stylists would have struggled to better. The bodies would be built by Jensen Motors in West Bromwich, then transferred to Longbridge for assembly to be completed. But before that, 19 prototype cars were built at Healey’s Warwick facility. Two were entered at Le Mans in 1953, and with both managing to finish in the top 15, a strong early reputation was developed. 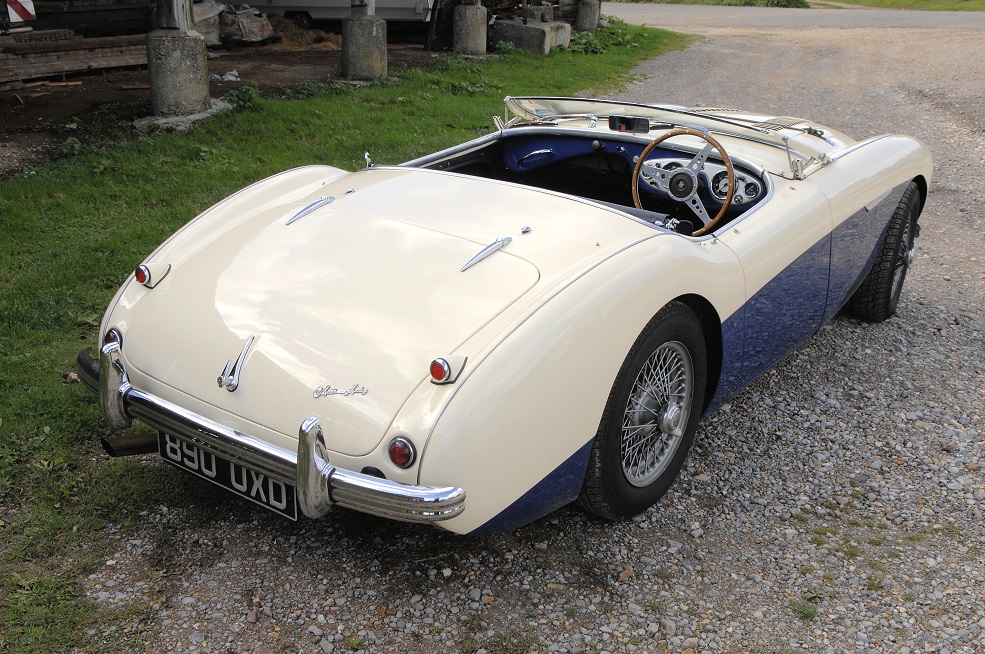 Production eased into life in 1953 as the ‘BN1’ model, which was an immediate success particularly in America, where the car’s performance and handling enthused the press. Over 10,000 cars were built before the launch of the ‘BN2’ model in August 1955 – a figure that could have been greater if Jensen could have made the bodies fast enough.

The BN2 got a four-speed gearbox with overdrive on third and top, plus a stronger rear axle, the option of two-tone paint, and slightly larger front wheel arches. But there was more than that. A 100bhp Le Mans Le Mans Engine Modification Kit had already been available from late 1953, with larger carburettors, a revised air box and high-lift camshaft, but now higher compression pistons were added to the mix to create a highly desirable new factory model – the 100M. Just 640 of these 110bhp variants were built, and they naturally command a sizeable price premium.

However, the daddy of the faster versions came in the shape of the alloy-panelled 100S (the S standing for Sebring), which produced an impressive 132bhp. Just 50 were hand-built with another five Works cars, and it’s fair to say you’ll need extremely deep pockets if one ever comes up for sale.

The last four-cylinder Healey 100 was built in July 1956 after another 4604 had been produced. Thereafter, BMC elected to fit a 102bhp six-cylinder engine, creating the BN4 model known as the 100/6. Recognisable by a revised oval grille, it used the C-Series engine first used in the Austin A90 Westminster. 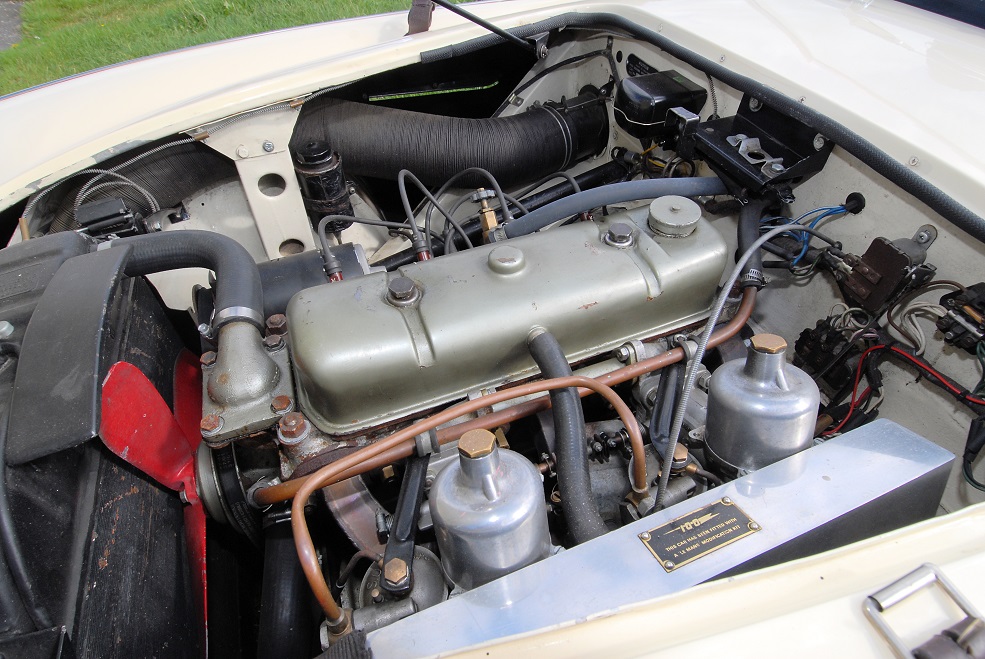 While the six-pot gave Healey a brawnier character, the formula had been diluted. Even in its later 117bhp guise, the 100/6 wasn’t any quicker than the old model, known retrospectively as the 100/4. The steering was also heavier, it understeered more, and heat soak from the engine made for a toasty cabin. Nevertheless, sales increased yet again – helped by a 2+2 four-seater variant – and Longbridge was unable to cope. So in 1957, production was moved – ironically – to Abingdon for the cars to be built alongside the MGA.

In 1959, the iconic 3000 then took over the baton, but it wasn’t until the model’s Mk3 swansong that the acceleration of the 100/4 could actually be bettered. Production of the big Healey would finally end in late 1967, 15 years after the 100/4’s Earls Court appearance. The six-cylinder variants are the best known, but the purity of the lighter and arguably sportier 100/4 means they are now hot property. 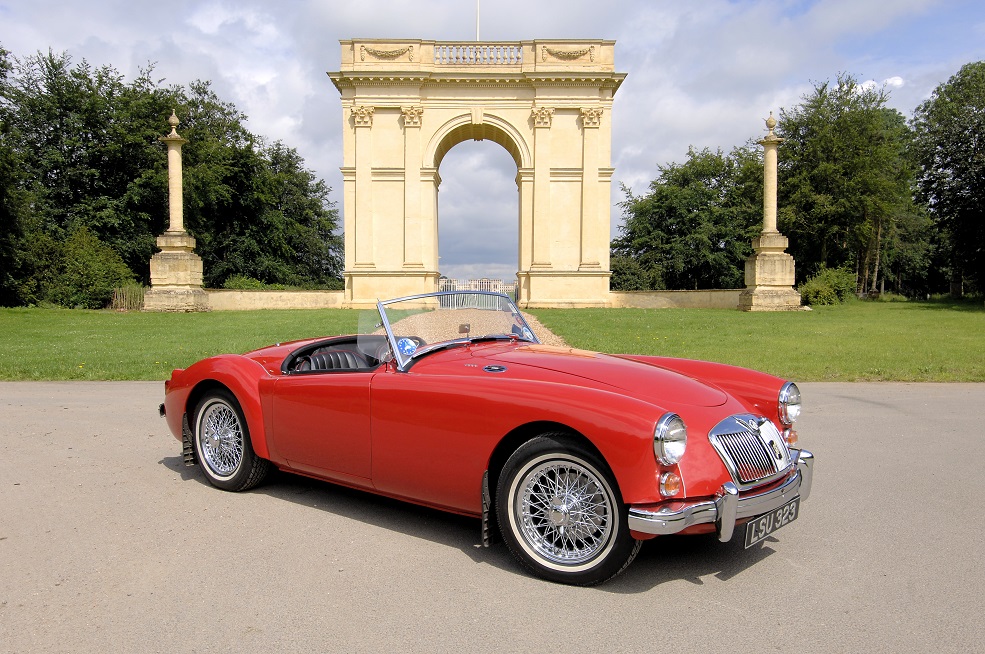 Though the Austin-Healey 100 looked like it would scupper MG’s plan for a new model, it was probably a blessing in disguise for the MGA. The delay meant it could use the new B-Series engine instead of the ageing XPAG unit – something that would really work in its favour.

The MGA’s slippery silhouette can trace its roots back to 1951, when chief designer, Syd Enever, produced a sleek new body for George Phillips’ TD in order to compete at Le Mans in 1951. It didn’t do well, but with a streamlined shape instead of the TD’s upright pre-War styling, ‘EX172’ could reach 120mph. A revised ‘EX175’ version used a wider chassis frame to sort the issue of the driver being sat too high, but with a deal with Donald Healey imminent instead, Leonard Lord put the brakes on.

This was bad news for Abingdon. Its existing TD model was updated to become the TF, but still looked uncomfortably old fashioned. By 1953 sales were falling and even Lord had come to admit that MG desperately needed something new. 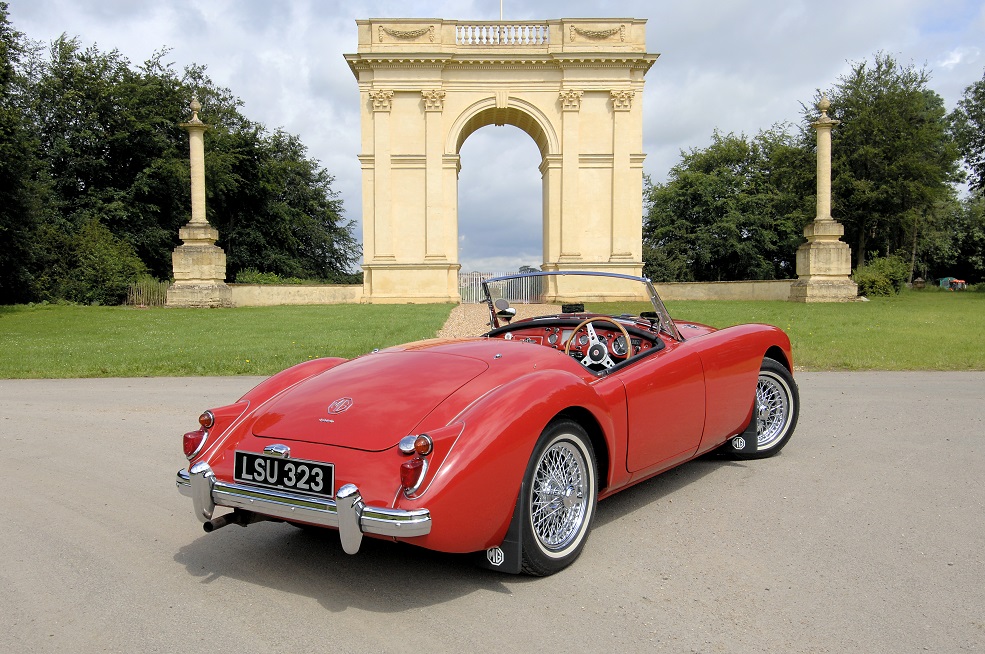 Due to be called the UA, the design was so different to the firm’s previous efforts that ‘MGA’ was chosen to signify the fresh start. Ahead of its launch in autumn 1955, three aluminium-bodied ‘EX182’ prototypes were constructed for Le Mans, with the two finishers both giving good accounts of themselves.

Initially, the A used a 1489cc B-Series rated at 68bhp, which was good for 98mph. Indeed, road testers of the time were impressed that such a capacity could give such strong performance, especially given that the 2.6-litre Healey wasn’t much quicker.

Power was boosted to 72bhp in 1956, with a coupe model joining the range the same year. Boasting more equipment than the roadster, this could crack the magic 100mph barrier thanks to its improved aerodynamics. Power was further upped to 80bhp in 1959, when the engine’s capacity was upped to 1588cc. Now known as the MGA 1600, it was also treated to disc brakes at the front and stiffened suspension.

However, it was the Twin Cam model that really revved things up. Launched in 1958 with a new crossflow aluminium cylinder head and a re-worked bottom end, the car produced 108bhp and featured Dunlop disc brakes all round concealed behind the same firm’s centre-lock steel wheels. 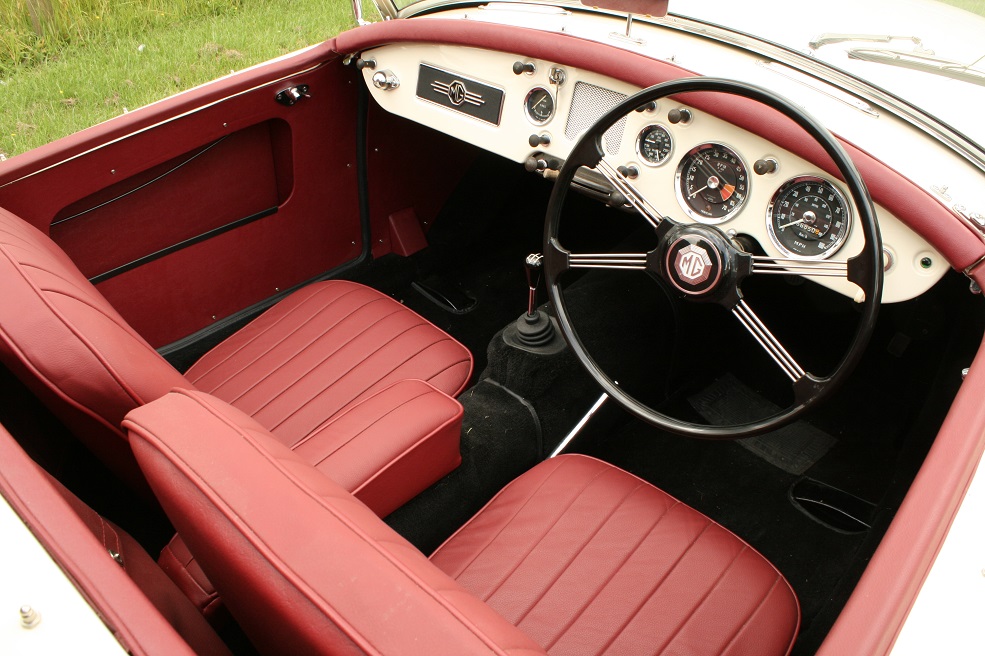 Though capable of 115mph, the Twin Cam developed a reputation for unreliability and heavy oil consumption. Tweaks were made, but the damage was done and it was discontinued in July 1960. Just 2111 were built, leaving MG with a surplus of chassis and bodyshells later fitted with regular B-Series engines and sold as the 1600 Deluxe, complete with the disc brakes and centre-lock wheels.

The MGA last hurrah was the Mk2, launched in March 1961 and fitted with a revised 1622cc B-Series producing 93bhp. These cars, identifiable by their recessed grilled slats and horizontal tail lights, were good for 102mph.

By this point the press was still enthusiastic, but sales had tailed off. This was especially true of the USA, which as with the big Healey, was by far the A’s biggest market. Even so, by the time the final car was produced in May 1962, 98,970 had been sold in just seven years, making it the best-selling British sports car up to that point. And though its MGB replacement moved the game forward in numerous ways, many would argue that it was the A that really transformed MG. 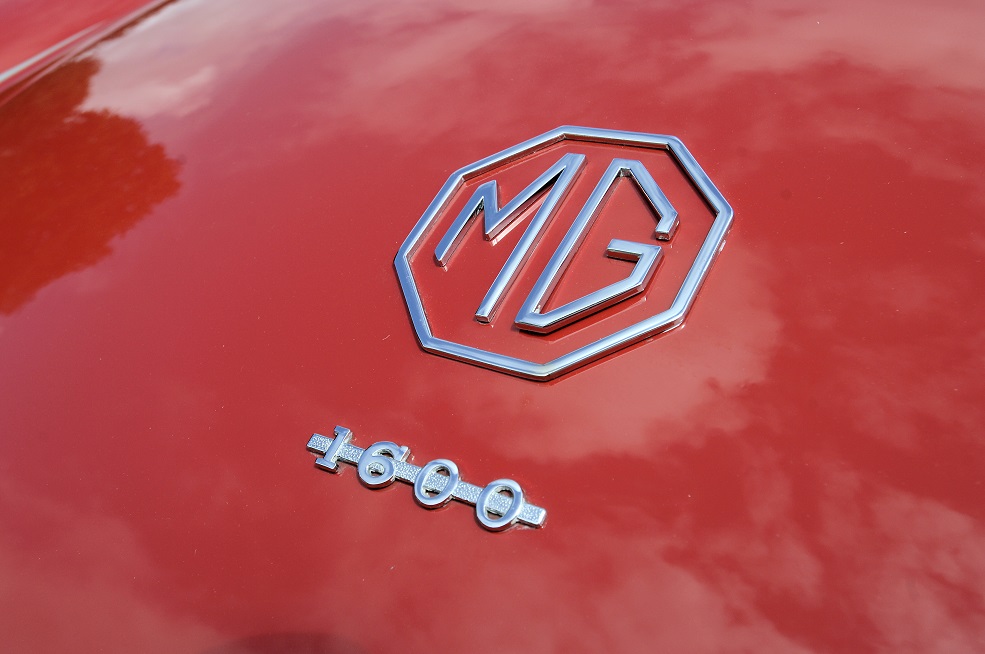 This is an incredibly tough one to call. Both are British sports car icons; the Austin-Healey taking the more brutish approach and the MGA more modern with its smaller engine and slippery shape.

The Healey clearly carries major appeal, especially in pure 100/4 form. I can’t deny that I’d love to own one and it’s more of a thoroughbred than the MGA, but it will cost twice as much to purchase. While a good 100/4 can command well over £50,000, half that will buy you one of the best MGA Coupes or a very decent roadster.

Fortunately, both cars aren’t too costly to run, and the Healey has very good club and specialist support. However, being an MG, the A is even more impressive in this regard. So given that the A is considerably cheaper, more plentiful and easier to live with, it just about gets my nod. I also can’t look past the impact it had on its manufacturer, and even now, I don’t think its beauty has been surpassed.

That said, if money was no object, I’d certainly wouldn’t say no to an Austin-Healey 100M, or better still, a 100S… 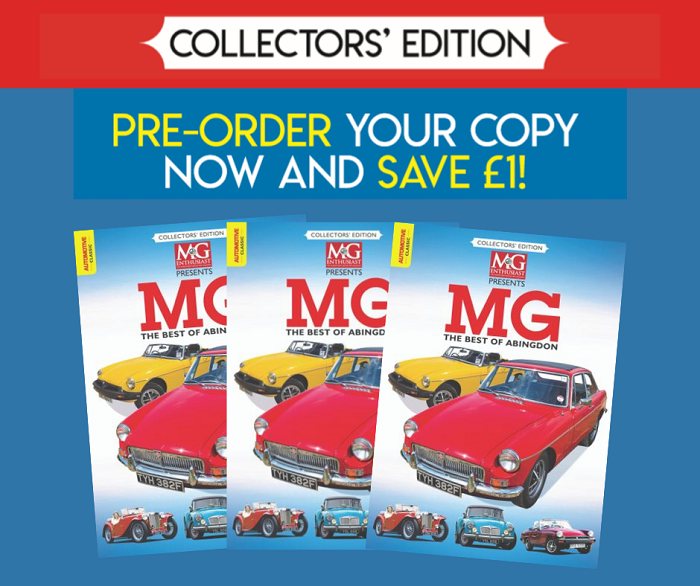