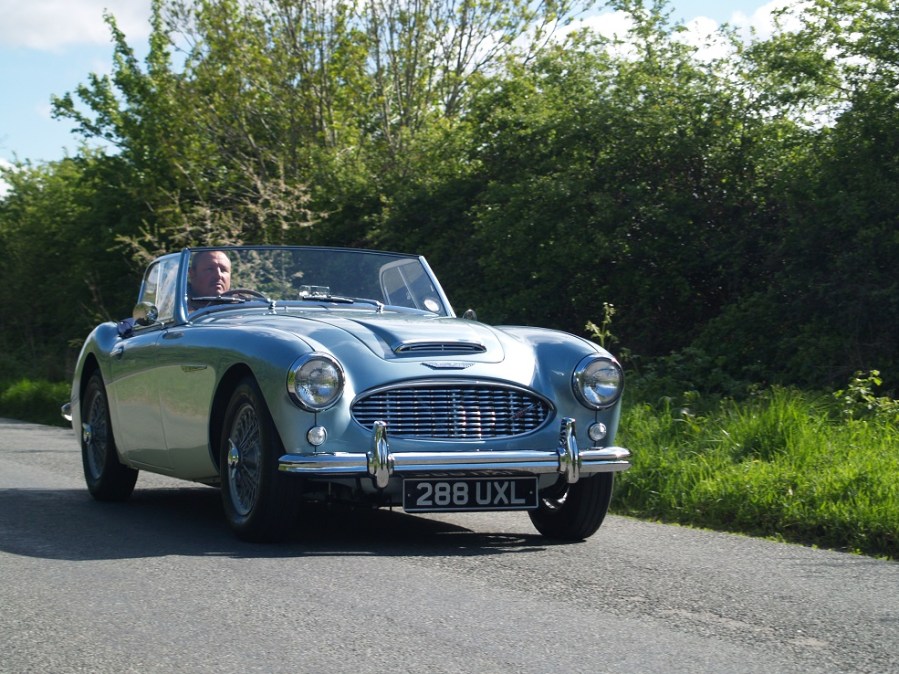 Simple, big-engined sports cars aren’t the preserve of the US makers. We round up our British sports car favourites.

What’s the stereotypical British classic? Leaving aside Nurse Gladys and her Minor, you’re thinking of something sporting and open. Typically a big engine. And the sort of car that people describe in a very specific way. A meaty car. A blokes’ car. A bruiser. These cars, the boxers of the old car world, are almost unique to Britain – European sportscars retain a lissom delicacy even with power, while the Americans think big and translate that into muscle cars like the Shelby Cobra.

But the British have always been different – and here at Classics World we love the British take on a classic sporting GT. We’ve rounded up some of our favourites to chart the story of our national automotive stereotype.

Arguably the most recognisable car on this list, the ‘Big Healey’ was one of the first post war bruisers to make itself known. The early 100/4s used the big four pot from the Austin Atlantic range, coupled to a talented chassis, while later iterations used the BMC C-series in varying states of tune. The car had come about as the result of a request by Donald Healey to Austin for the provision of engines for his new sports car design. Leonard Lord took one look at it, saw that it would be a far better Stateside seller than the dumpy and flamboyant Atlantic, and agreed to the deal on the proviso that Austin be involved in the manufacture, branding and sale. The Healey 100 thus became the Austin-Healey 100, with body and trim work subcontracted to Jensen in West Bromwich and married to the engine in Longbridge.

Launched in 1953, the basic recipe remained unchanged until the car’s replacement in 1967. It sprouted the six pot along the way and some little niceties like winding windows, but fundamentally the concept of the Big Healey was just as burly and muscly by the end of production as it had been at the start. The MGC that replaced it was never viewed so favourably. 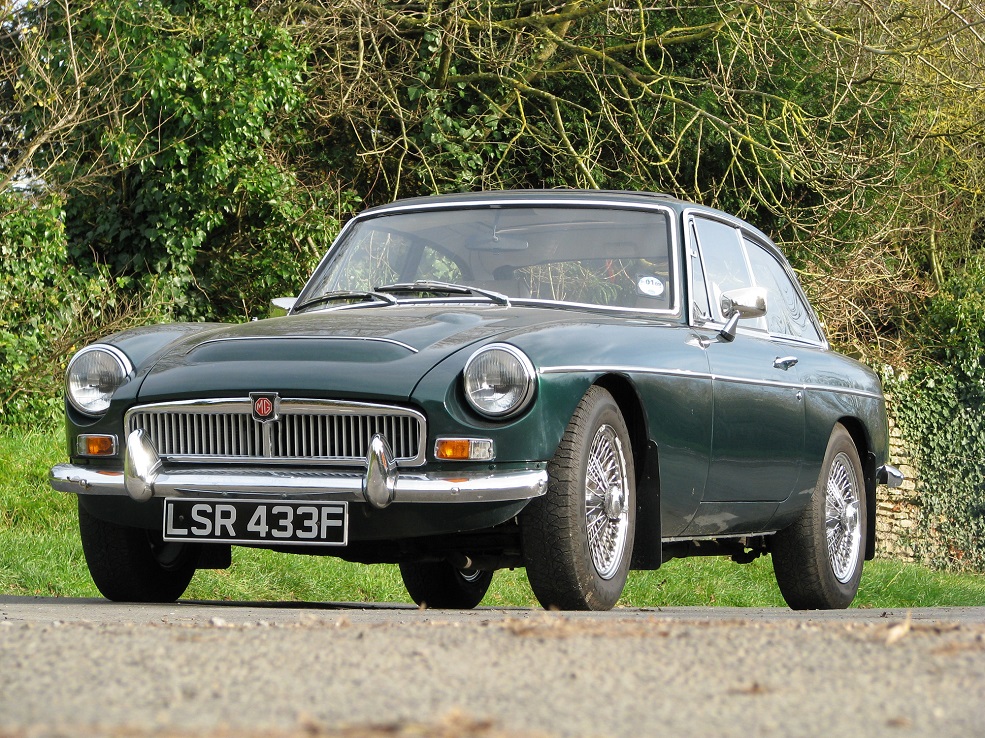 That, of course, wasn’t strictly fair on the MGC. Launched in 1967 and produced for just three short years, it was a valiant attempt to rationalise the sports car range. Originally plans had existed to modify the Healey chassis and fit the Vanden Plas 4-litre R engine, but this was abandoned in favour of a more up to date solution. This effectively involved an MGB, torsion bar front suspension, a new bonnet and a massive shoehorn to fit the C-series from the Austin Three Litre. The result was not liked by the press – noted for unwieldy handling courtesy of low front tyre pressures in the press demonstrators, it attracted a reputation for being a bit of a dog. Which is wholly unfair – the MGC, with modern rubber and sensible pressures, has handling that’s oddly redolent of an E-type when you drive it within its limits.

Never given the AH badge – royalties were beyond the means BMC had available – the C is a classic whose reputation has haunted it for decades. But the market now realises that this excellent GT has earned its place in the pages of history. 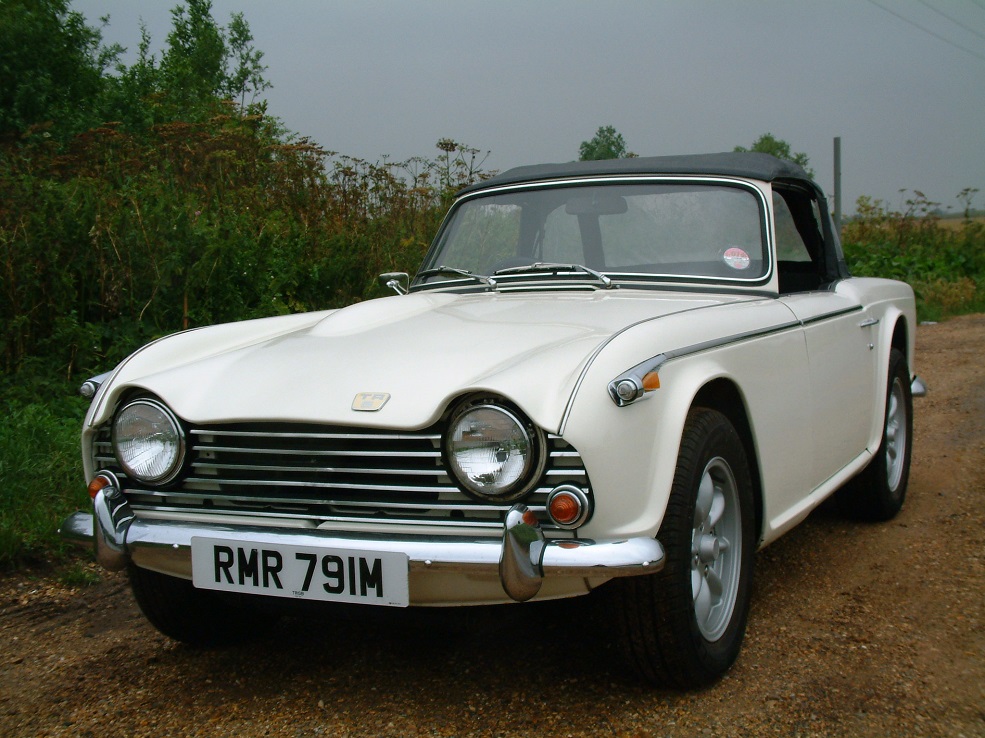 While the TR family tree stretches back to the 1950s and the TR2, many look upon the later six-cylinder models in particular as the cars which assumed the mantle of the Big Healey upon its discontinuation. The TR5 was the first TR to eschew the Standard Vanguard derived engine in favour of an enlarged variant of the Triumph 2000’s six – and in UK trim, came equipped with Lucas mechanical PI. The US market got a similar model – albeit Stromberg-equipped, striped and renamed the TR250.

1969 saw this car substantially revamped for the new decade; the somewhat fussy Michelotti nose and small fins were binned in favour of Karmann’s square-edged look. This was enough to give the impression – at first at least – of something rather more thorough than a facelift. Triumph didn’t tinker much with the mechanical formula though – six cylinders, a simple chassis, and lots of fun.

Many were disappointed by the subsequent TR7 – but the market had changed. Convertibles were no longer the in thing, and in the wake of the oil crisis four cylinders were deemed more socially conscious than six. Within the BL empire, the traditional British big sports car was over. 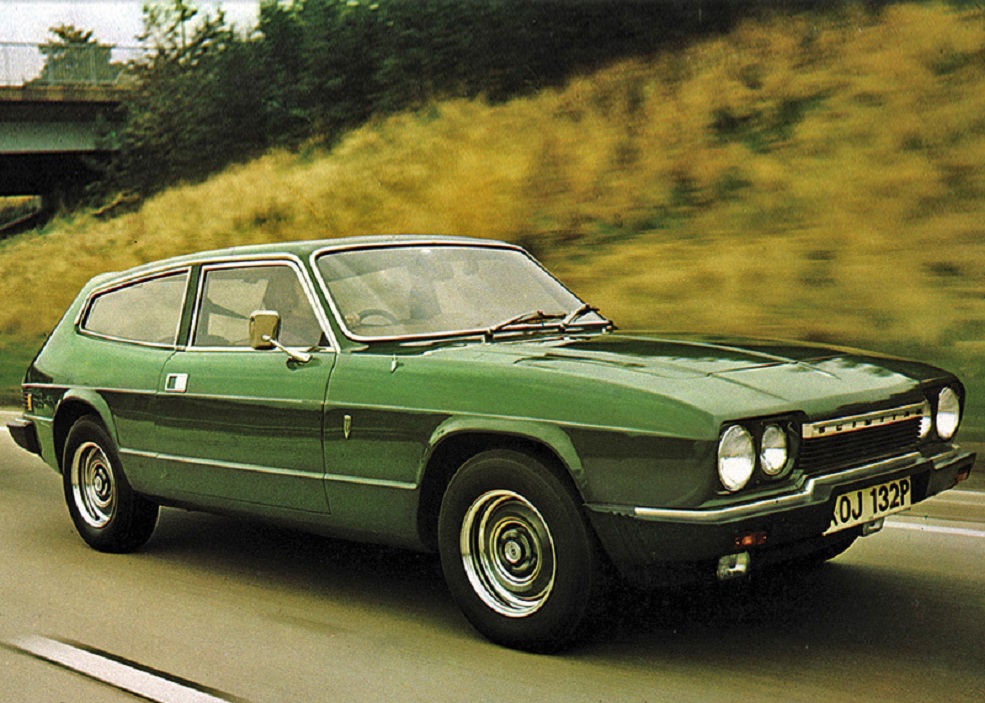 So what do you buy if you need a little more space, or lack the budget for an open Brit bruiser, but you want the same meaty feeling? Why, a Reliant Scimitar GTE of course. Many would dismiss the Scimitar as a Capri in a plastic shell, but to do so is to miss the point of one of Britain’s best value classic GTs. Yes it uses Ford running gear, but that just makes parts and upgrades cheap and easy to source. The plastic body means rot shouldn’t be a worry save for the chassis, and the numbers built mean that prices remain sensible.

The concept of a sports estate wasn’t new – Ogle had originally modelled a Scimitar estate with the help of Triplex to highlight its new tinted glass. Prince Philip was a fan – sparking a long association between the Scimitar and the royal family – and it wasn’t long before a more rationally designed derivative was launched.

The GTE saw several revisions during its life – predominantly a restyle for 1975 and the new Cologne engine for 1980 – but stuck to the traditional recipe of torque and fun. A GTC convertible latterly evoked the halcyon days of the TR and Healey ranges, but was dropped when Scimitar production ceased in 1982. Middlebridge relaunched the Scimitar at the end of the decade as a luxury GT, with reasonable success. 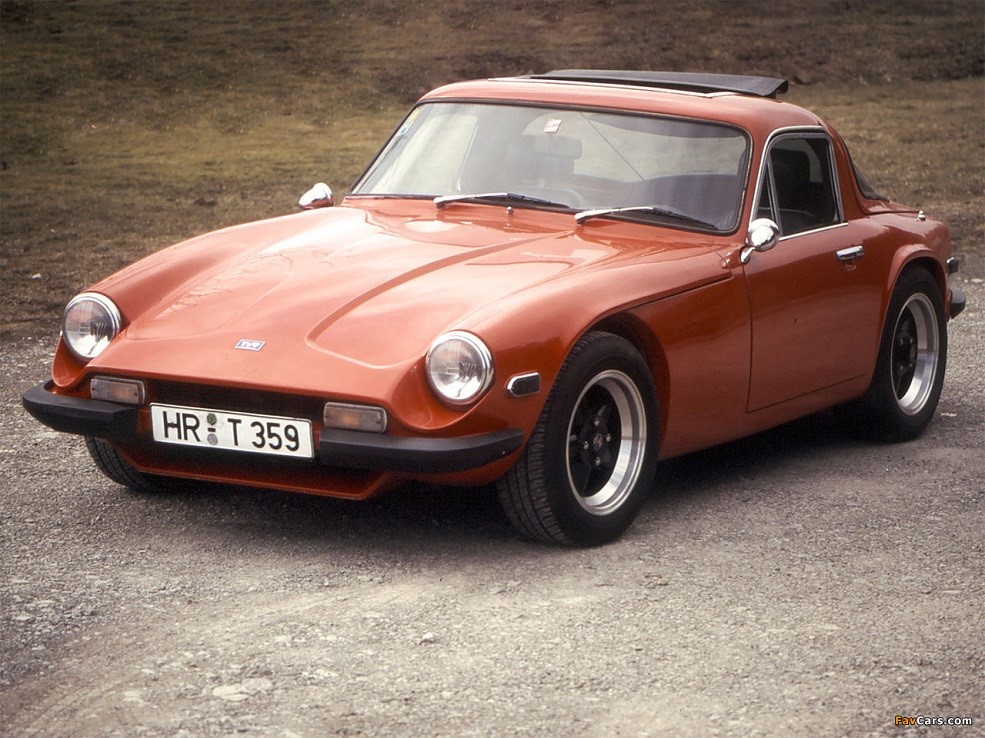 While Reliant was catering for those who needed space, TVR assumed the mantle of the hairy chested mainstream sportscar from the TR6, with the 3000M and subsequent Taimar ranges. But arguably, it didn’t come into its own until the introduction of the 3000S convertible in 1979. This true successor to the TR6 used Ford running gear under a body which harked back to the 1960s, yet was all new – a development of the 3000M coupe. TVR spent the 1980s focusing on the Wedge series, but the S convertible was reintroduced as an entry level model for 1986. Available with Ford V6 and Rover V8 engines over time, this desire for an entry level model in the range naturally led into the relatively soft and comfortable Chimaera of 1992. Here was a TVR that didn’t bite like the Wedge – that had style and substance but was accessible. As TVR became more extreme with models such as the Speed Twelve and the Tuscan, the Chimaera felt less relevant. It was replaced by the T350 in 2003. 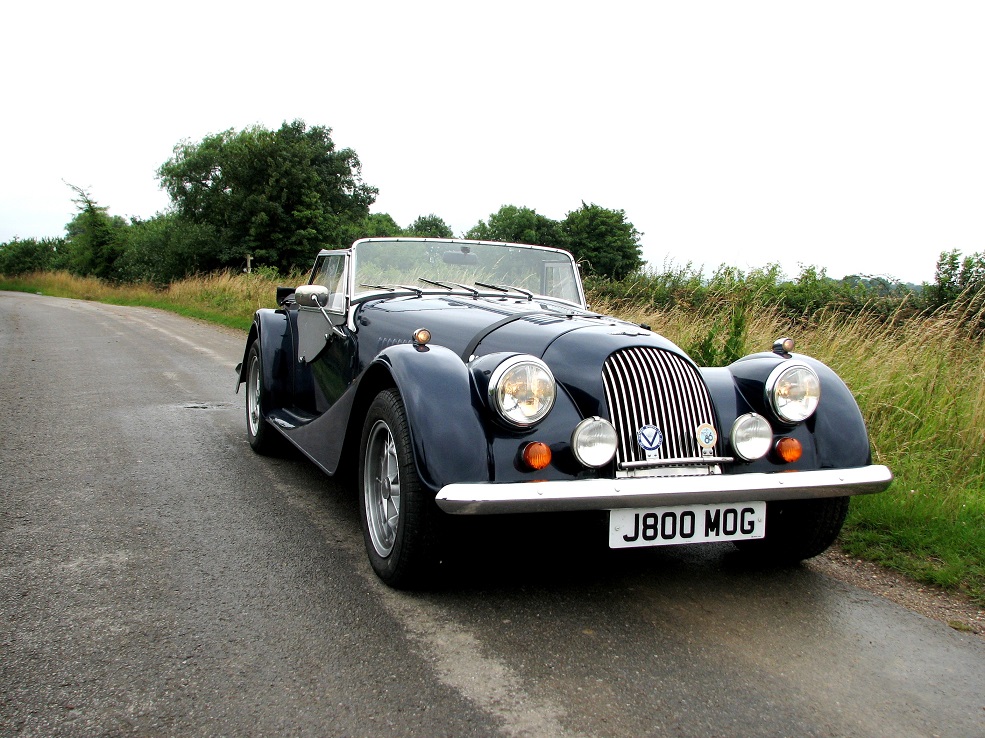 It’s hard to find a car more traditional than the Morgan Plus Eight – one of the few Brit bruisers to have survived into the 21st century. Still constructed around a timber frame and to a design arguably better-suited to the 1940s, Morgan has carved itself a niche in the market catering for those who want old school British fun. Launched in 1968 and discontinued in 2004, the Plus Eight kept the flame of the Brit bruiser burning long after most other marques abandoned the idea.

The Plus Eight used a Rover V8 engine in a modified Plus Four chassis, providing hairy chested thrills to the sort of chap for whom the Triumph TR4 was too much of a sop to luxury. Side screens were still the order of the day right to the end of production in 2004, and those who rode in it complained of the firm, old-school ride.

But then the Morgan was never supposed to be up to date. It deliberately evoked the past for those who craved the vintage experience with modern reliability. A Morgan isn’t so much a car as a complete lifestyle shift. And the diehard following to this day proves that fact.

The bruiser is a staple of any classic British car group or event – and as a nation, we’ve become good at those big lazy sportscars that offer a very different thrill to the European competition. However you like your bruiser to be, there’s a classic alternative from the Healey to the Scimitar, TVR to Morgan. Long may they be loved!