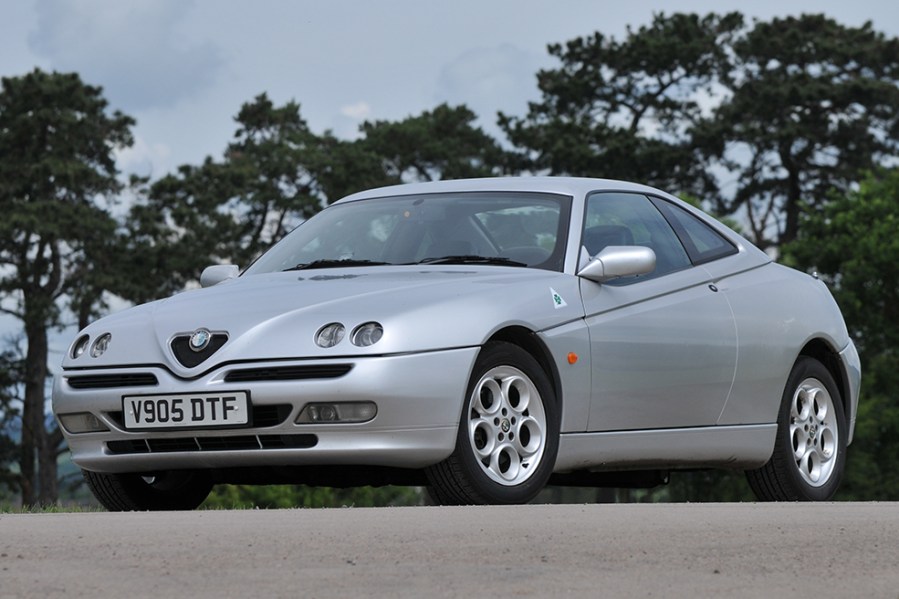 The first of a new era for the Italian brand, road testers compared the Alfa Romeo GTV to BMWs when new. Here’s how to buy one today

Any reader of car magazines over the years will be painfully aware that Alfa Romeo as a brand has had countless fresh starts over the years – and many’s the time a new model has been touted as ‘the car to save Alfa’. And so it was with the ‘916’ Alfa Romeo GTV.

Much like the Ford era at Jaguar, Alfa purists worried that Fiat ownership would see the brand’s unique appeal diluted in the pursuit of profit as costs were cut and platforms were shared with the workaday Tempra and Brava. Just as with the Jaguar/Ford situation though, the reverse actually happened; Fiat Group’s design and manufacturing clout helped Alfa Romeo move away from its rather shambolic modern history.

The Fiat takeover was completed in 1986 and the new models took a while to filter through but when the GTV and its Spider convertible sibling broke cover in 1994, the world took notice. The new car’s style was bang up to date thanks to Pininfarina stylist Enrico Fumia, yet retained the glamour expected of the Alfa Romeo brand.

Underpinning the car was the so-called Tipo Due (Type 2) platform developed for a range of Fiat Group vehicles, from Alfa Romeo 145 to Lancia Delta, Fiat Tipo and Fiat Coupe. One of the early attempts at a modular vehicle platform architecture, it was designed to use MacPherson struts at the front and rear trailing arms – although the two Alfa Romeo cars both used a more advanced multi-link set-up in place of the trailing arms, employing upper wishbones with twin lower links and anti-roll bar.

The Alfa Romeo GTV and Spider were launched in Europe in March 1996 with just two engine options: the ‘Busso’ V6 in 3.0-litre, 24-valve form rated at 230bhp and the four-cylinder 2.0-litre.

Although badged as TwinSpark, the 2.0-litre shared only the name with earlier Twin Spark engines which had been based on the long-serving ‘Nord’ Alfa twin-cam dating from the 1950s. Transversely mounted and essentially an enlarged version of the modular Fiat engine already used in 1.8-litre form in the Barchetta, it gained an Alfa Romeo cylinder head housing 16 valves and eight spark plugs – and with it an entirely new character full of brio, complete with variable cam timing.

The V6 was more familiar, the long-serving unit having debuted in the 1979 Alfa 6 and more recently found in the 164. With its characterful note and 230bhp it created a charismatic performance car which tempted many away from the BMW 328i.

Crucially, BMW’s mid-ranger was by then in its E36 guise, which really did represent the state of the art in car design at the time. That Autocar signed off its first road test of the right-hand drive GTV with the question “Still want that BMW?” was praise indeed.

In 1998 the design was mildly facelifted, with a more major restyle arriving in 2003. At the same time a direct-injection JTS four-cylinder was added with 165bhp, alongside the 3.2-litre V6 from the 156 GTA – good for 240bhp and a top speed of nearly 160mph. Both GTV and Spider were discontinued in 2005, replaced by the handsome Alfa Romeo Brera and Spider, which were criticised for their uninspiring handling compared to their predecessors.

The Twin Spark is a Fiat unit rather than the old Alfa twin cam and so uses a rubber cam belt instead of a chain. The official Alfa schedule involved swapping it at 72,000 miles or six years but specialists today recommend 36,000 miles or three years to avoid an expensive bang. Specialists often suggest replacing the camshaft variator on the Twin Spark at the same time if it’s rattly. Oil and filter change intervals are similarly best halved.

If the engine feels flat  part-way up the rev range and is reluctant to rev out, suspect the MAF sensor or oxygen sensors, which can fail without bringing up the ‘check engine’ light.

Both four and six-cylinder engines are a tight fit in the engine bay and access is tight especially at the bulkhead, so be aware that some jobs can be time-consuming, especially the oil cooler pipes on the V6 which tend to corrode. And be aware that spark plug changes on the Twin Spark cost twice as much as a conventional four-pot engine. Leaky power steering pipes are no longer available new, so used parts or a custom-fabricated replacements are required.

Even on the V6 cars, gearboxes are long-lived, although some specialists report owners finding fifth gear difficult to engage. This has been traced to the fifth gear itself coming loose, but the good news is that it can be sorted with the engine and box in the car. 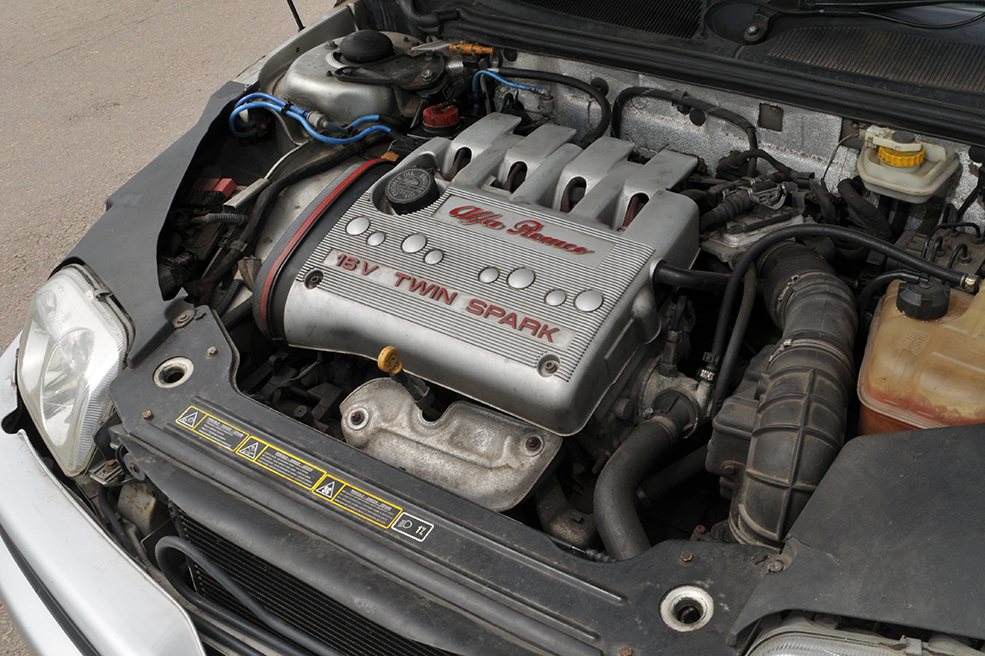 They’re pretty solid and the shells were galvanised when new but the one spot where rot does tend to develop is around the rear wheelarches which can get costly to sort neatly. Similarly and much like many sporty cars of this era, the factory sideskirts serve as a rot trap if not regularly removed and cleaned out. It’s unlikely a seller will let you remove the skirts when you go to view and they curve under the sill too much to see any rot from ground level. Ask to jack the car up and get a good look under the car with a torch. Ham-fisted trolley jacking can also cause corrosion if the welded lip under the sill is distorted.

The front clamshell is plastic and so won’t rust, but it is heavy: mind your head as tired gas struts can drop it without much warning and cause untold damage.

It’s a complex set-up with many bushes to perish and fail. At the front, the wishbone bushes can fail and will eventually cause the inner edge of the tyres to wear. The rear is more involved, with bushes in the suspension arms causing the handling to feel woolly. The bushes in the spring pan can also fail with similar results, but all the parts are available. The V6 cars use spherical joints instead of rubber and metal bushes, but when these fail the entire arm will need to be replaced instead of just the bush.

It’s a conventional set-up and other than warped discs holds few surprises. It’s common for the rear calipers to seize though and if you go to the trouble of changing them, it’s wise to fit a pair of handbrake cables at the same time – the outer casing tends to split and the cables corrode internally. 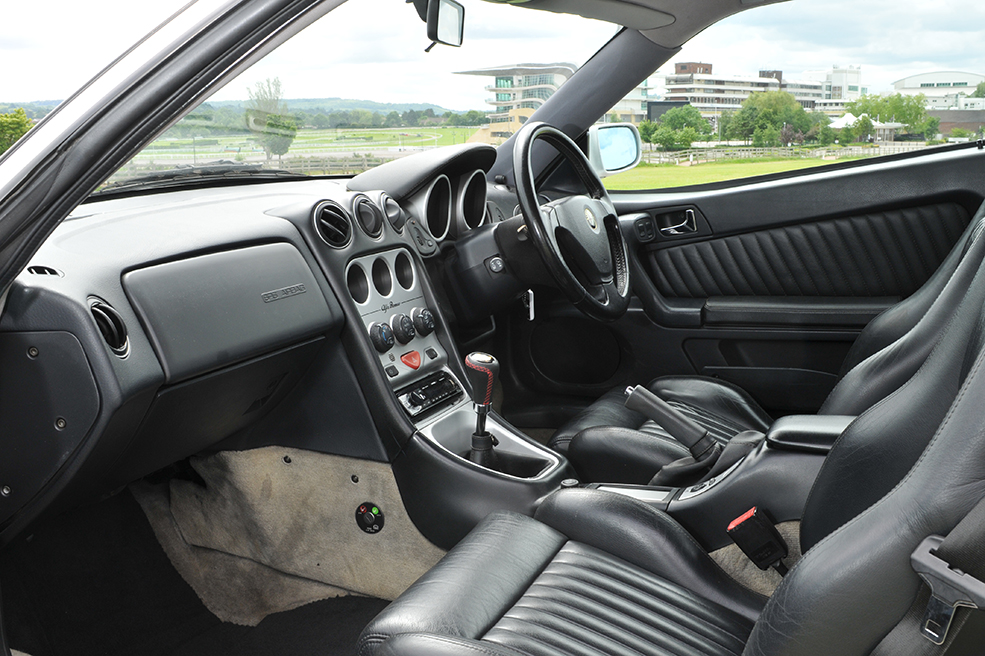 The elegant interior, especially the Alfa-embossed leather in Lusso versions, is all part of the appeal of these cars, so don’t settle for one with a tatty cabin. Plenty of used parts are still available from Alfa breakers, but pristine door cards are scarce: the seat belt buckle often gets trapped when closing the door and will punch a hole through the plastic. An easy and cheap fix is a small clip on the upper seatbelt just below the buckle’s resting point.

Expect failed dashboard bulbs and similar, but it’s unusually easy to dismantle without breaking clips. Smaller interior parts like gear lever gaiters can be replaced with used original parts or aftermarket leather items, but word to the wise: set aside a couple of hours to change the gaiters – it’s a fiddly affair…

Forget the Alfa jibes of old: these cars are made to a modern standard and in reality the electrical system is pretty reliable, especially if it hasn’t been messed about by alarm and stereo installers. If the alarm fob for the UK dealer-fit Meta System alarm is falling apart, specialists can source a replacement.

If you experience an odd issue with one sidelight and the diagonally opposite rear light out, then that’s how it’s supposed to work: the lights are fused this way. Electric aerials are unusually robust compared to the GTV’s contemporaries, but if it doesn’t retract or raise completely, run a WD40-soaked rag up and down the aerial and power the radio on and off a few times to extend and retract it. As with many electrical items, regular use is good for it. 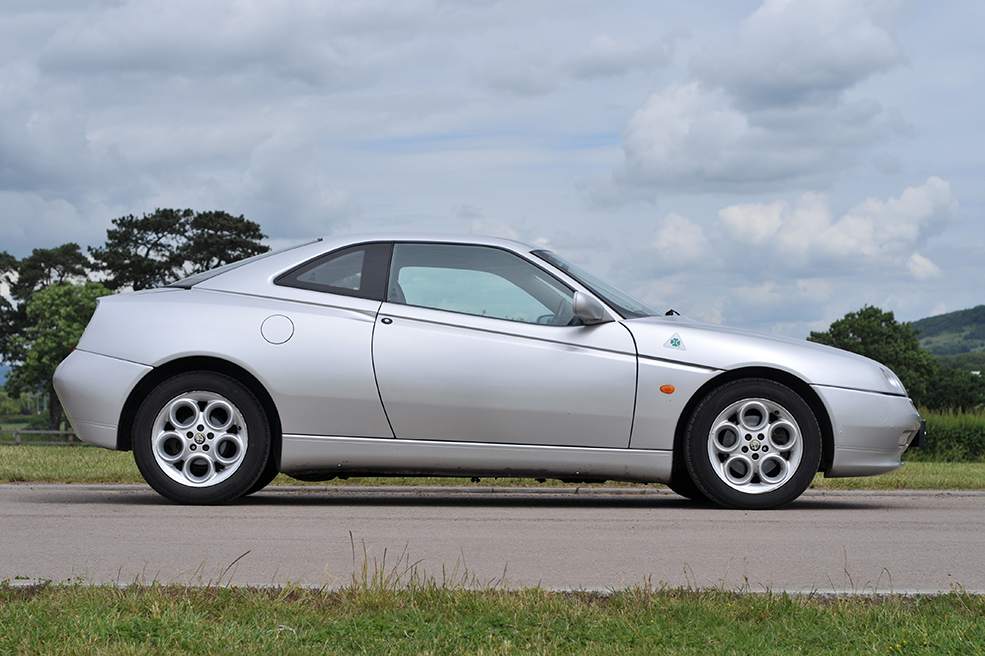 Never a huge seller in the UK, the Alfa Romeo GTV is a relative rarity today when compared to the BMW competition of the day; it’s not helped by poor parts support compared to the German makers.

Despite this, the car still feels very modern to drive and despite its Fiat origins offers every bit the Alfa experience – without, surprisingly, many of the compromises of the older cars.