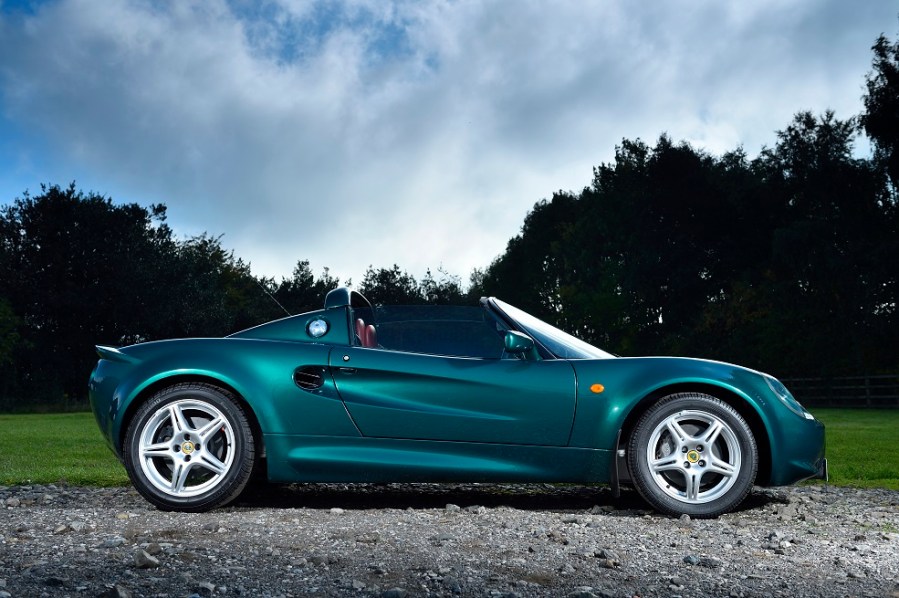 There was a time when mid-engined cars were the preserve of the exotic but today there are plenty of affordable choices. We round up some of the most accessible.

Writing a history of the original VW Golf recently, it was fascinating to see just how close Volkswagen came to financial oblivion through relying on the air-cooled, rear-engined layout for so long. After all, the standard layout for passenger cars has involved a water-cooled, front-mounted four-stroke engine for so long now that it’s easy to forget how many rear and mid-engined cars were once on offer.

Back then a mid-mounted engine was still pretty much the preserve of racing cars and so when it was applied to road cars the idea seemed impossibly exotic. One of the earliest roadgoing mid-engined production cars was the 1962 Porsche 550, although a total run of just 90 is stretching the term production. The idea resurfaced in the mid-1960s to better effect, with the Lotus Europa, Matra Djet and the Lamborghini Miura all offering the glamour of a mid-rear mounted powerplant.

Fast forward half a century and the mid-engined car is still with us, but no longer the preserve of the exotic. Of the traditional classics, the Fiat X1/9 and Porsche 914 offer a taste of Ferrari and 550 respectively, while the MGF/TF, Toyota MR2, Lotus Elise and Porsche Boxster can be had for real-world money. Here’s what you need to know if you fancy a taste of the Miura for GTI money. 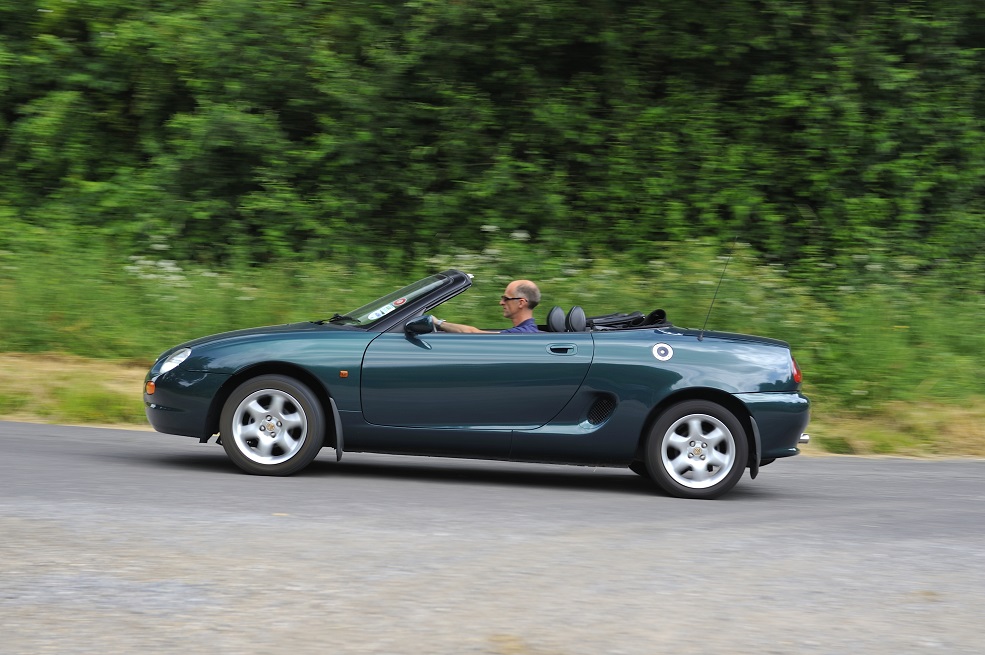 In some ways the MG’s mid-engined layout came about almost by accident. Three proposals had been commissioned by Rover Group for a new MG sports car, of which one was discarded after it was decided its front-mounted V8 was too old-fashioned and the second was sidelined due to being based on the soon-to-be obsolete platform of the Maestro/Montego. Which left the third option as a mid-engined concept using two Metro front subframes – one with engine but no steering and the other with steering but no engine. This was done as a cost-effective way to create a running prototype but during management evaluation it was obvious what a significant cost saving the use of Metro running gear provided and this helped the design win the day.

The MGF was perhaps unique among mid-engined sports cars in that the use of as much carry-over componentry as possible created a less intimidating product. Buyers used to hot hatchbacks found the driving position more familiar than competitors like the MX-5. The Longbridge engineers also developed the car’s handling to be less sudden than many mid-engined sports cars and as a result it was easier to drive fast, felling generally more secure – and with its Hydragas suspension, comfortable too. Not that  this prevented it from beating BMW’s own Z3 around the Nürburgring, something which impressed the Bavarian high-ups sufficiently to allow it a stay of execution after BMW acquired Rover.

With the newly-developed K-Series engine enlarged to 1.8 litres, the MGF possessed the pace to worry the GTI crowd and was a stronger seller than anyone expected. If there was a downside, it was the reputation the cars developed in later life for head gasket issues, an unavoidable product of the front radiator with pipework connecting it to the engine. Eight potential leak points with no low-coolant warning made it easy for unobservant owners to overheat it.

These days though, uprated gaskets and better maintenance have the issue licked and so an MGF represents tremendous value. Indeed, perfectly serviceable cars can be acquired for under £1000 needing only enthusiasm and basic DIY skills to bring up to scratch. 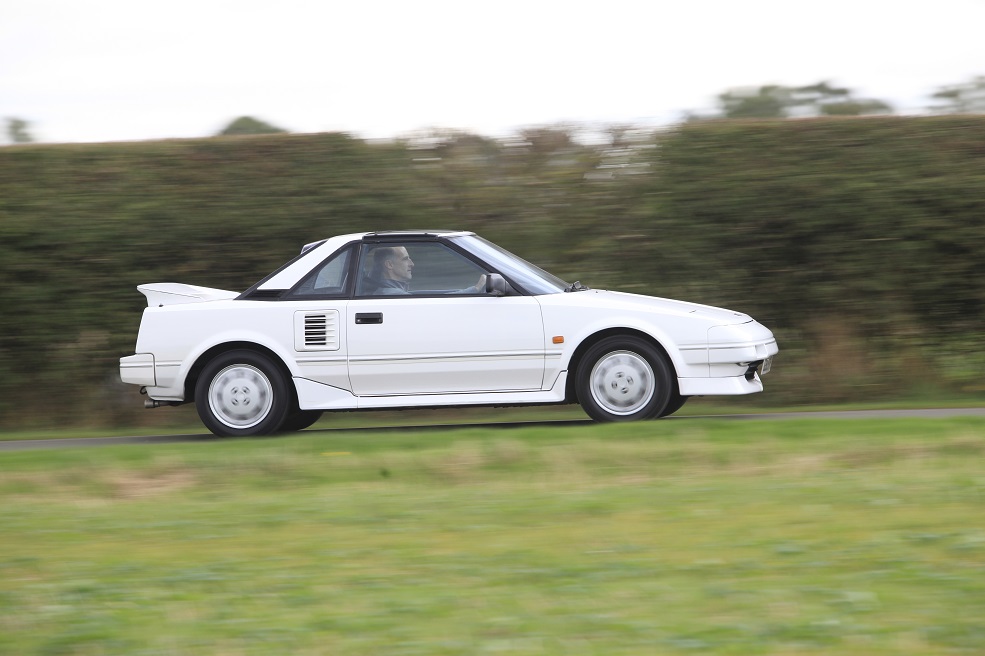 The name says it all: Midship Runabout, 2 seater. The car may have been an aberration for a maker better known for humdrum if reliable saloons and hatches, but its origins were very similar to the MX-5 in that Toyota could see a gap in the lucrative US market for an affordable sports car. The concept exhibited as the ‘SV3’ at the 1983 Tokyo show duly went into production very little changed and was technically fascinating, its 977kg weight translating to sparkling performance from the Corolla AE86’s twin-cam 16-valve engine which itself weighed only 123kg.

The car wasn’t quite such an affordable prospect in the UK market, where it was priced at the top end of the hot hatch market. Nonetheless it gained a cult appeal and was well regarded by road testers of the day. The original evolved into a second generation in 1989 with more generic, less angular styling which made it seem like a larger, more mature package.

There was something of an about-face for the third generation in 1999 which saw the MR2 return to its back-to-basics roots. The mid-engined theme was retained but the car slimmed back down to just 960kg and did without even a proper boot, using a golf bag-sized recess behind the seats. Just one engine was offered worldwide, a 16-valve 138bhp 1.8-litre which provided the car with similar pace to the original and made it very much a Boxster-lite.

The car was discontinued in 2007 with no replacement but the third generation remains common and you’ll pick up a serviceable one for under £1000 with patience. 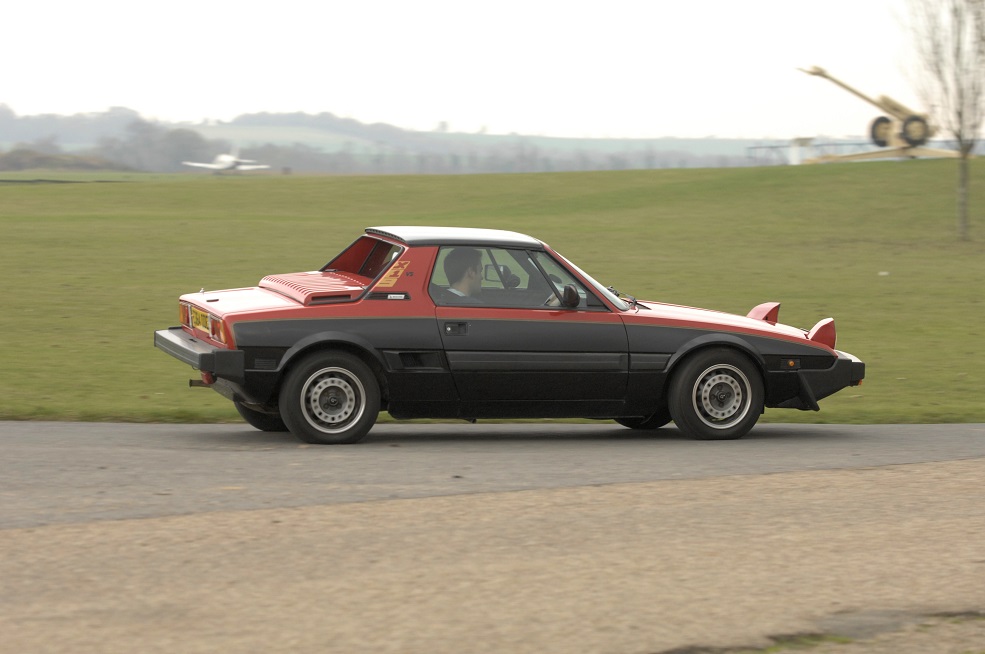 It’s always been surprising that the mid-engined Fiat didn’t fare better in life. Eminently affordable, with a style which could only be Italian and a tenuous link to Ferrari, it was very much a more sophisticated European MG Midget. Launched in 1972, the car had been developed from an initial styling concept by Gandini while at Bertone, called the Runabout and using Autobianchi A112 running gear. The production car took its drivetrain from the Fiat 128, initially in 1300 and then in 1500cc form, in which guise its 75 bhp gave it a top speed well over 100mph.

Like the MGF, the car used a front-mounted radiator with water pipes running the length of the car and the tendency for these to leak in later life contributed to the rust endemic to all Italian cars of the period. It’s perhaps this which explains the poor survival rate, since nobody has ever stepped out of an X1/9 without a broad grin. As a left-field alternative to the MGF it takes some beating, but they’re relatively rare in the UK. If you can find one, budget on £4000 for a useable car, with really nice examples running up to £10,000. 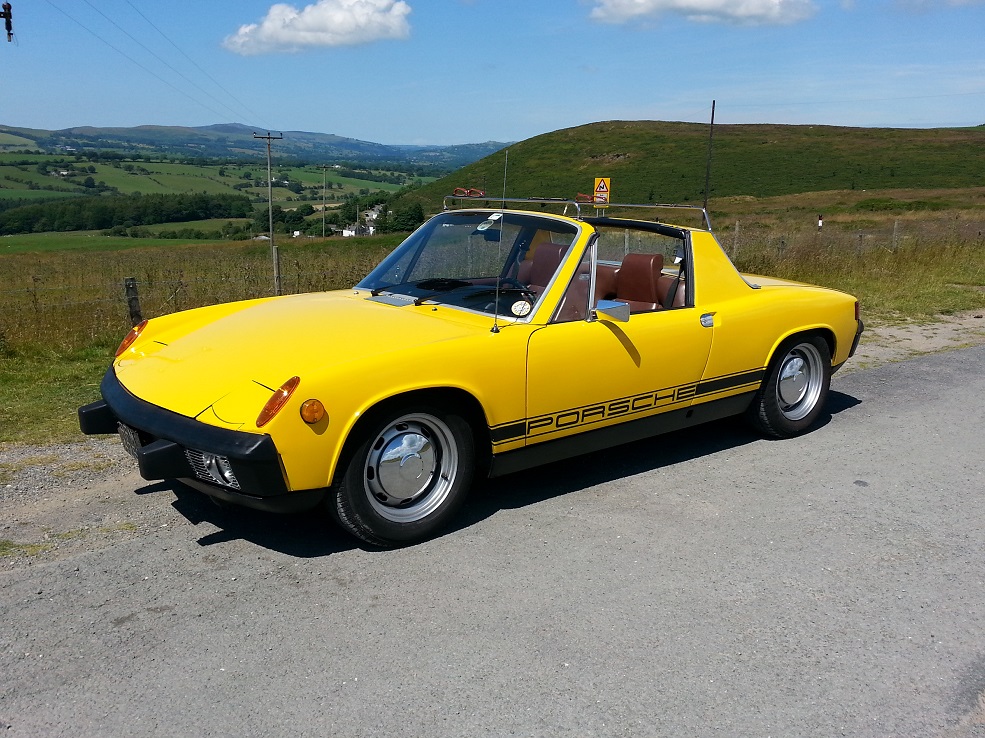 Few readers can be unaware of the connection between Volkswagen and Porsche and like the later 924, the 914 was developed as a joint venture, Porsche wanted a new entry-level car to replace the four-cylinder 912 and VW wanted a halo model to replace its Karmann Ghia. The idea was that the VW-powered four-cylinder cars would wear the VW badge and the six-cylinder Porsche-powered cars the Porsche crest. In the end both cars were sold with VW-Porsche badging. The four-cylinder 914/4 was vastly more popular than the six-cylinder 914/6 and the model in fact outsold the 911 for the first time.

Time was when a Porsche 914 was a cost-effective alternative to a 911 with the attraction of more easily maintained VW running gear but although that’s still true, the 914 is no longer the small step up from a Beetle or Karmann Ghia it used to be. Expect to pay £10,000 for a usable, respectable example which will more than likely be an ex-Californian car. Remember, the 914 was never produced in factory right-hand drive. 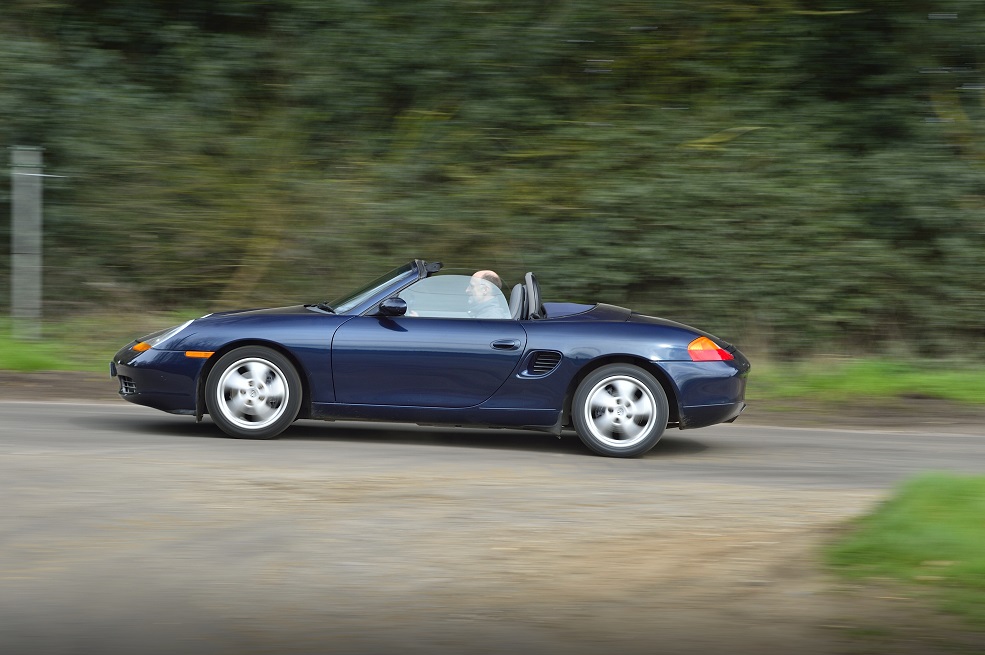 If you discount the 924, it was the mid-engined Boxster which was the 914’s spiritual successor. The car’s origins were in Porsche’s falling sales during the early ’90s, as the 911 began to look increasingly antiquated, as did the entry-level 944 which was derived from the 924. As a stop-gap, the 944 was developed into the 968 while Porsche developed the next 911 generation in parallel with a new, cheaper car which could share its componentry and development costs.

The Detroit show in 1993 debuted the Boxster, its mid-engined styling reminiscent of the old 550 and its front end identical to the 993 generation 911. By making the cheaper car a strict two-seater, Porsche was able to rotate the engine and transaxle 180 degrees, marking an important point of differentiation. The Boxster used a smaller version of the 911’s flat-six powerplant and with a roof cleverly designed to fit into the mid-engined layout, the car was launched in 1996 and quickly outsold the 911 – mainly due to its sub-$40,000 selling price in the US market.

The original Type 986 Boxster was replaced in 2004 by the 987, itself replaced by the 981 in 2012. Today an early 2.5-litre Boxster is yours for well under the £500 mark, with useable cars at little more than £2500 if you’re feeling like a gamble. Just be wary of the infamous rear main seal issue which can write off the engine. 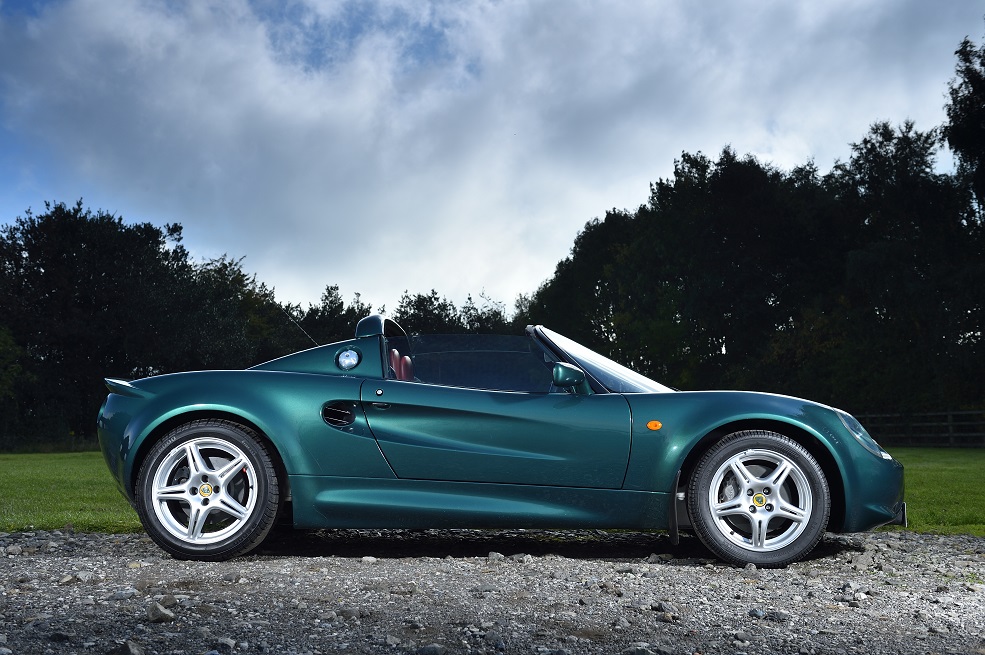 Lotus was one of the early proponents of the mid-engined car with its awkwardly styled Europa which arrived in 1966. The Esprit took up the mid-engined baton in 1976 but moved steadily (if unwisely) upmarket and it wasn’t until 1996 under the ownership of Romano Artioli that the firm returned to its roots with the car which became the Elise.

The brief was to create a modern-day high-tech version of the original Seven and an extruded aluminium monocoque was the radical solution. A riveted and bonded construction made it stiff as well as light and the use of a mid-engined layout allowed front-end crash protection to be more easily incorporated. It also allowed the use of an off-the-shelf engine and gearbox package, in this case Rover’s lightweight, modern K-Series.

Interestingly, in its Lotus application the K-Series proved less troublesome than in the MGF and when the car was launched at under £20,000 it was a genuine exotic at GTI money. Its success took even Lotus by surprise and the planned 400 cars a year was ramped up to 2500 a year.

The Elise was given progressively more powerful versions of the K-Series until being replaced by the Toyota-powered second generation in 2001 and current Lotus models are still essentially derived from the original concept.

Today Series 1 Elise values are increasing, but you’ll pick up a nice useable example (there just aren’t many tatty ones around) for around £13,000.