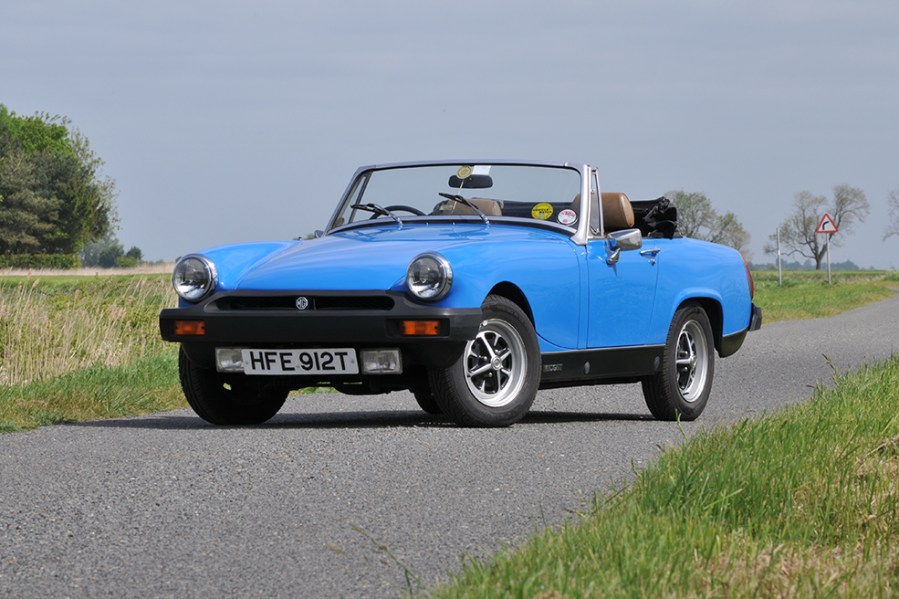 The MG Midget is to many the archetypal classic small sports car. Front engine, rear wheel drive, tried and trusted mechanicals and an open body that screams of summer days and picnics. But as the 1960s became the 1970s the Midget lost its delicacy of line. Fitted with polyurethane bumpers that looked five times too big for what was already an old design, against cars designed for the new decade it appeared an irrelevance.

The MG Midget dates back in concept to 1958 and the Austin Healey Sprite. This happy looking little car used Austin A35 mechanical components in a body which looked like the most enthusiastic frog you ever did see, earning it the Frogeye sobriquet. When it was facelifted for 1961, the decision was made to offer the car not only as an Austin Healey, but also as an entry level MG – reviving the Midget name last seen on the TF1500 in 1955. As launched, it had a 948cc A series engine, along with simple yet square jawed styling that partially predicted look of the MGB of the following year. Not even fitted with door handles in its earliest incarnation, a folding hood was the sort of luxury Midget man could only dream of, and in place of winding windows were side screens.

The Midget evolved over time though – first gaining door handles and wind up windows with the MKII of 1964, and finally a folding hood with the MKIII of 1966. By then the engine had grown to 1275cc – a detuned version of that found in the Mini Cooper S in order to avoid outperforming the bigger B –  and the styling had remained largely unchanged. New grilles followed in line with changes to the MGB, and in 1971 the rear portion of the body was modified the feature round wheel arches similar to those fitted to the earliest Sprites.

By this time the final Sprites had been built – badged solely as Austin to avoid paying royalties to Donald Healey. The round wheel arches would cease in October 1974 – but not before large and unsightly overriders (nicknamed Sabrinas, in honour of the well-endowed British actress) had been fitted in a sop to low speed impact protection for the US market.

Emissions equipment was also strangling the A-series by this point in what was one of its key marketplaces, and so when BL restored to the heavy polyurethane bumpers of the MK3’s replacement it knew the A series would no longer be up to the job. 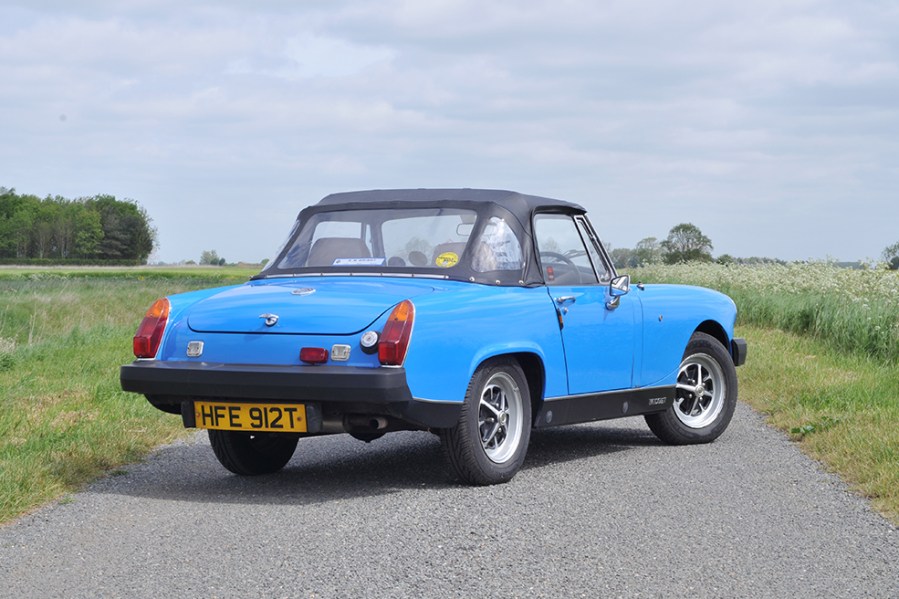 Fortunately, salvation existed in the form of the Triumph Spitfire. Its 1500cc engine would fit under the bonnet of a Midget, was already adapted to meet US legislation, and would provide the car with enough power to maintain its sporting credentials without outgunning the larger MGB once again. The Midget 1500, as It was known at launch, would be the final iteration of the model – fitted throughout production with the heavy bumpers and Rostyle wheels, as the 1970s progressed and new shapes began to emerge it appeared increasingly irrelevant.

In 1979 the last Midgets were built, and British Leyland’s sports car division would make do with its former rival the Spitfire as an entry level model in all markets. A total of 72,289 Midget 1500 models were built, out of 305,877 Sprites and Midgets in total.

Pageant Blue is a divisive colour among Leyland enthusiasts, but there’s no denying that in this shade the Midget looks like a product of the 1970s. The square driving lamps give out test car a bolder face, too, detracting from the visual heft of the polyurethane mask shielding the vulnerable front panels of the car. In an era where the wearing of a mask has become commonplace and accepted, somehow the rubber-bumper MGs look less heinous than they may have done a decade ago; we can see past the bumpers to the beauty of the car underneath. And this one is a beauty. 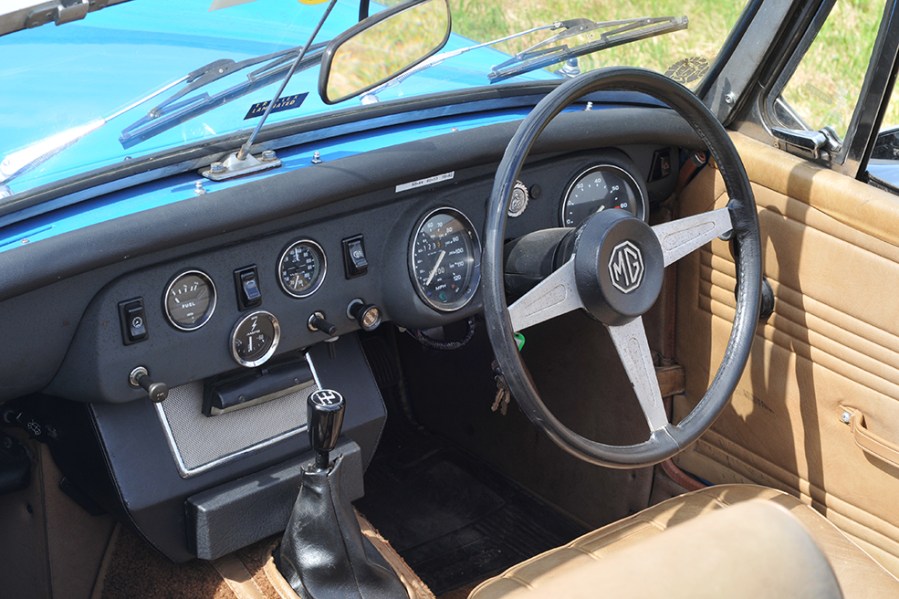 Inside there’s lots of black vinyl, along with a steering wheel with shaped spokes that look like a Mota-Lita with the central holes filled in. The leatherette rim both looks and feels suitably sporty.

As befits its name, the Midget perhaps isn’t the best choice of sportscar for the more physically abundant driver. If you’re anything approaching six foot, your head will stick out over the windscreen and if you’re anything but rake thin, you’d better be on close terms with any passengers you might carry. But with the roof off and the windows down, it’s not the problem many might perceive. Yes – you might need to have your elbow over the top of the door, but that’s the best way to drive a car like this anyway.

The extra torque of the Triumph engine over the A-series makes itself immediately felt – even if the extra power is blunted by the weight of the bumpers at either end. The Midget is still a pleasant little thing to chuck about, although some of its responses do verge on the twitchy side – improved from earlier cars, which had a quicker rack, but still potentially an issue should you need to react in a hurry. It’s tightly sprung, with front coils and rear leaf springs, and perhaps a little bouncy if on an uneven road. This can be tricky if you get the car and the surface out of sync, but such occasions are rare and the competent driver should be able to read the road and apply speed accordingly.

Unlike the equivalent Spitfire, the Midget 1500 never left the factory with overdrive, and for sustained high speed driving the gearing is short enough for you to feel that the conversion – which involves modifying the transmission tunnel – is worthwhile. But then again, if you’re driving a Midget for sustained periods at high speeds, either you’re on the wrong road or you’re in the wrong car.

This is a machine which thrives on the twisting B-road – a car that makes the most of what little it has by carrying speed into and out of bends, by the driver making full use of the gearbox to ensure that the maximum power is there to pull you out of the bend when you need it most. Of course it feels wrong on a motorway – it’s not its natural habitat. Put this car where it belongs and there are few automotive experiences more entertaining. 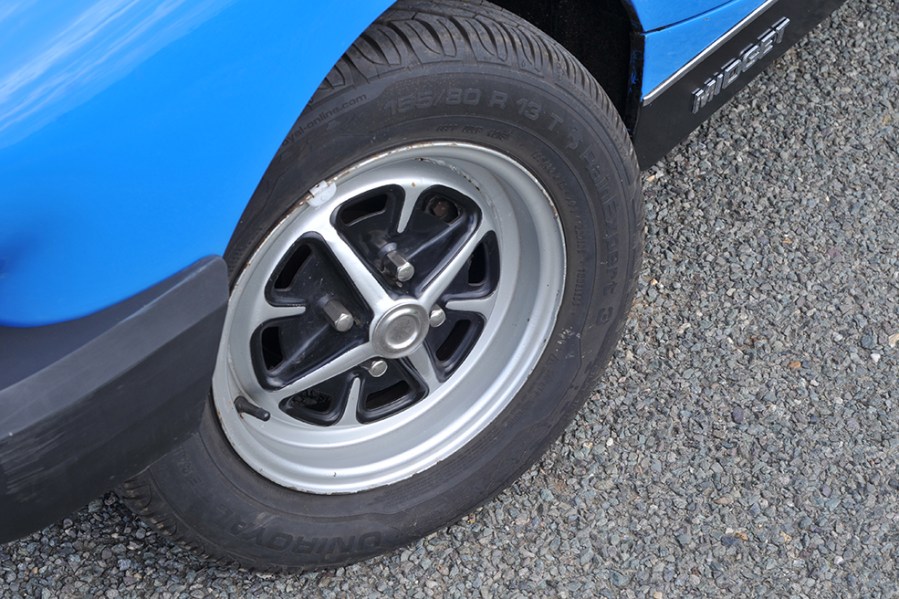 There’s a reason that the MG Midget is one of Britain’s most popular classics – and it’s not simply that so many of them were made. It’s that as well as being cheap, entertaining and simple, almost everything you might need is still available. Moss Europe will sell you a brand new bodyshell for your Midget 1500, and around £2400 will get you a brand new engine from the same supplier. Trim is easy to come by and easy to upgrade, and pretty much every suspension component can be had too. You can’t buy brand new polyurethane bumpers, but you can get round this either by converting to chrome or by buying used bumpers from someone doing the same.

Meanwhile, service items are cheap – a service kit will cost about £45 from Rimmer Brothers. The Midget is almost as cheap as walking, and you’ll get well over 30mpg if it’s in fine fettle too. As long as you keep an eye out for corrosion – primarily in the floorpan, front wings and A-posts – you should find Midget ownership cheap and cheerful. The fact that it’s huge fun to drive is a massive cherry on the cake.