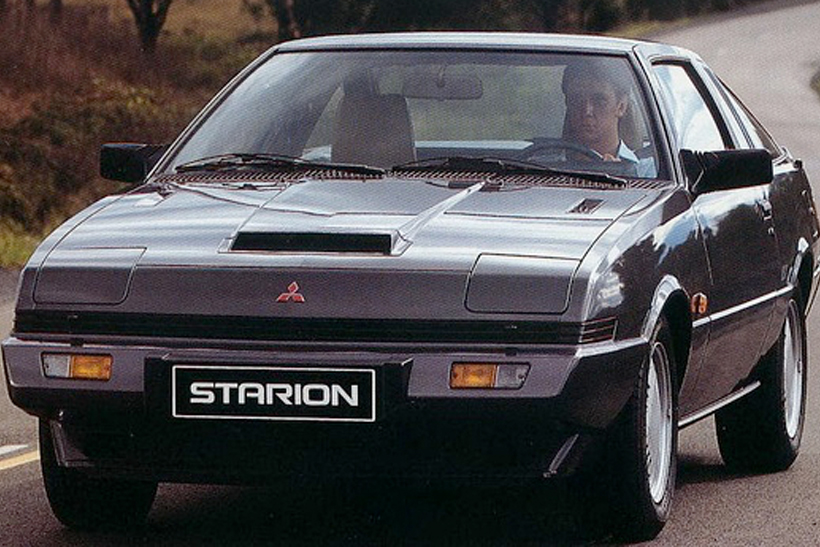 In 1981, Mitsubishi launched the Starion in the UK as an entry-level sports car in a rapidly expanding market of Far East-built performance coupés, which included the Nissan Z cars, Toyota Supra, Honda Prelude and Mazda’s Wankel rotary engine-powered RX-7. At the time of the Starion’s launch, Mitsubishi was trading in the UK as the Colt Car Company Ltd. and the Japanese car manufacturer was also successfully marketing the Starion in North America as the Conquest under the Chrysler, Dodge and Plymouth brands.

The Porsche 924-influenced MkI was originally badged in the UK as the Colt Starion and was powered by a four-cylinder, 2.0-litre, single overhead cam turbocharged engine that could push out 170bhp despite the turbo being devoid of an intercooler. In 1983, an air-to-air intercooler was fitted to the Starion’s powerplant when the MkII was introduced, boosting power output to 177bhp. A small ‘bib’-type front spoiler was fitted below the bumper to force air into the newly installed intercooler, which due to space constraints had to be mounted horizontally – not the most efficient position for what is basically a heat exchanger.

NAME CONFUSION
Mitsubishi dropped the Colt name on all the cars it sold in the UK the following year, rebadging the turbocharged GT the Mitsubishi Starion. There’s been on-going controversy, over the naming of the car ever since it was launched. One school of thought claims that ‘Starion’ is a corruption of ‘Stallion’ caused by a mistranslation from English to Japanese. This misconception was reinforced by the fact that an early Japanese TV advert for the car ended with a logo featuring a profile of horse’s head. What this logo actually represented was the mythical Greek horse Arion and the celestial star, resulting in the name ‘Starion’ being a contraction of the ‘Star of Orion’.

The rear-wheel drive Starion was further revised for what turned out to be a sportier-looking MkIII version. A modified front spoiler with a deeper air-dam now allowed the intercooler to be repositioned vertically, greatly enhancing its efficiency. At the rear a new, three-piece spoiler now gave the car a visual ‘wrap-round’ effect, while up front the Starion’s bonnet lost its air vents. Further body modifications were applied to the car’s side panels, which were smoothed out, and a pair of high intensity driving lamps was installed in the front bumper valance. This heavily revised model was the last of what enthusiasts refer to as the narrow-bodied Starion as Mitsubishi Motors UK was about to introduce a totally new MkIV version that would in turn become known as the wide-bodied Starion.

The two different styles of body are often referred to as ‘flatties’ and ‘fatties’, the narrower bodystyle continued to be built for certain markets as its dimensions complied with Japanese tax regulations that penalised larger vehicles with an engine displacement exceeding 2000cc. In 1987, Mitsubishi introduced the new wide-bodied MkIV in the UK as the Starion ESI-R. The uprated sports coupé now featured flared wheelarches and deep side skirts, while new deeply dished 16-inch alloy wheels sporting chunky 225 profile rubber filled the expanded rear ‘arches.

This was the Starion’s final major body revision, as the most notable upgrade for the 1988-introduced MkV was the installation of the 2.6-litre, turbocharged four-cylinder engine that had been installed in cars destined for the US. Increasing European emission regulations together with the introduction of unleaded petrol had made the fitting of this engine necessary, but despite the engine’s larger displacement, a catalytic converter dramatically reduced power output to just 153bhp – lower than the previous 2.0-litre unit. Some owners got round this reduction by removing the catalyst and replacing the standard turbo with a larger Garrett item, a modification that increased the 2.6-litre’s output to a more respectable 240bhp.

Externally, the only clue that a wide-bodied UK-market Starion is fitted with a 2.6-litre engine is a lack of pop-up headlight washers on the front grille. All Starions sold in the UK were fitted with a five-speed manual gearbox as standard, with a four-speed auto being offered as an optional extra. Front suspension was by MacPherson struts and anti-roll bars were fitted fore and aft. Some models were fitted with limited slip differentials and single channel anti-lock brakes acting on the rear wheels only as standard. Inside the cabin, seating was arranged in the usual coupé two-plus-two format. On the road, turbo lag was always a problem with the Starion, although the car’s striking looks made up for any deficiency in the mechanical department.

An all-wheel drive version of the Starion was successful in a number of Group A World Rally Championship events but a road-going version was never fully developed due to the cancellation of Group B rallying. Production of two-wheel drive road cars came to an end in 1989 – the Mitsubushi GTO taking its place.