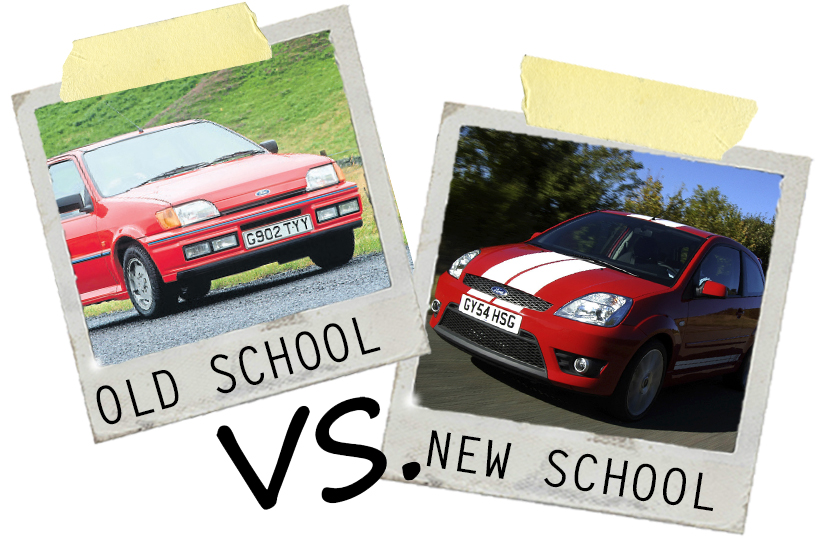 Welcome to Old School vs New School where we visit the controversial subject of traditional classics compared to their more youthful equivalents. First up, the Ford Fiesta XR2I versus the Ford Fiesta ST… 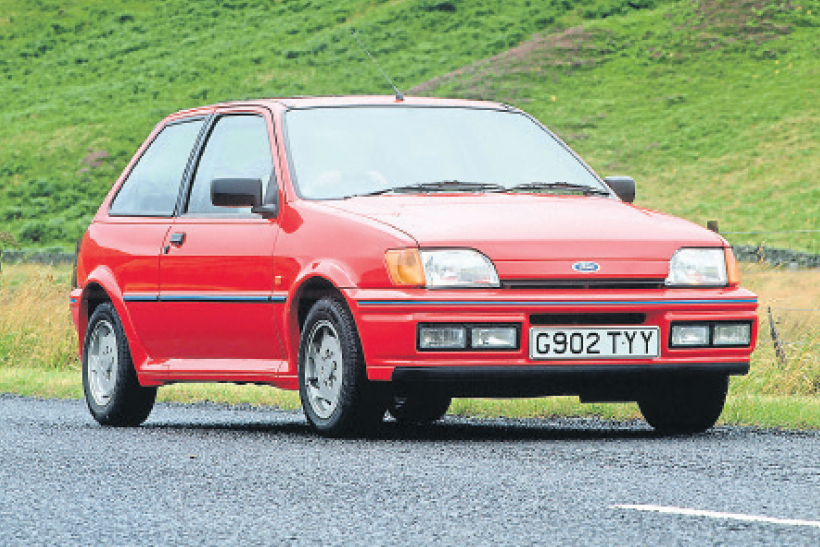 Launched in October 1989, the fuel-injected XR2i arrived 10 months after the base Mk3 Fiesta model went on sale. At the time this seemed an age, but the marketing gurus at Ford realised that by choosing to keep the limelight on the lesser models for this time meant that sales could be driven while all the time feeding teasers into the market that a hot-hatch was coming. This helped drive demand for the new model when it arrived.

Potential buyers were greeted with a purposeful bodykit on top of the Mk3 shell, with enough grunt under the bonnet to warrant the flared arches. The tried and tested 1.6-litre CVH engine was entrusted with the job again, this time with the addition of fuel-injection to give it the extra poke needed to haul the heavier weight. The engine also utilised Weber injectors and a new EEC-IV engine management system, as well reworked camshaft and manifold specifications, which all resulted in a higher top end of 119mph and a 0-60mph spring of 8.9 seconds.

Admittedly the XR2i did have its faults, the biggest being the slightly soft handling and slow steering, the former being rectified in the Zetec 16V model. But as ’80s hot-hatches go, the XR2i is a brilliant all-rounder and a great entry into classic blue oval ownership.

OWNING ONE
The biggest plus point for owning an XR2i is readily available parts. As with most hot variants of regular models, part sharing is high, so expect interior trim and upholstery easy enough to get hold of. Replacing poorly panels and whole bodykits is also easy enough and won’t break the bank balance. The more difficult parts to get hold of relate to the standard audio equipment, but aftermarket alternatives are not the end of the world, nor are they too expensive.

BUYING ONE
• Rust – check for signs around the fuel filler cap as it’s most commonplace here. Rot in the bulkhead, floorplan and sills are more of a concern.
• Ford audio systems are in demand.
• Warped discs are common. Replacement OEM parts are inexpensive. ABS models can be costly and more hassle than they’re worth should it fail with spiralling costs.
• B5 gearbox strong but can suffer from collapsed bearings, particularly on the output shaft. Fifth gear can be noisy on a worn gearbox.
• 60,000 miles is the round ball park figure for tired springs and dampers. A loose rear end points to worn beam bushes. The bottom arm bushes can be weak – check for vagueness of steering and knocking over bumps.
• Regular oil changes are needed to stop the hydraulic tappets getting sludged-up and writing off the camshaft, and the CVH also needs cambelt changes at 20,000-mile intervals. Poor starting can mean fuel pump issues or the crankshaft sensor is faulty.

VALUES
Values for XR2is have increased well over the years and can vary drastically depending on condition and mileage. Concours condition cars top £10,000 quite easily so there’s room for a bargain should you shop around. A restoration project will see cars sell for as little as £1000, but realistically, you should be budgeting for around £5000-£8000 for an MoTd example. The 16-valve Zetec-engined models feature stiffer suspension and sell for closer to £8000.

FORD FIESTA XR2I INSURING
To cover a 1987 Ford Fiesta XR2i worth £7000 you’re looking at £75 with £100 accidental damage, fire and theft excess through Adrian Flux. Quotes are based on a 45-year-old male, second vehicle. The car is garaged, covers 3000 miles a year and lives in an SP2 postcode. He has no claims or convictions, is a club member, and is employed as a marketing manager. Comprehensive cover quotes were supplied by Adrian Flux and include free legal cover and optional agreed value. You can get your own quote at Adrian Flux or on 0800 369 8590. 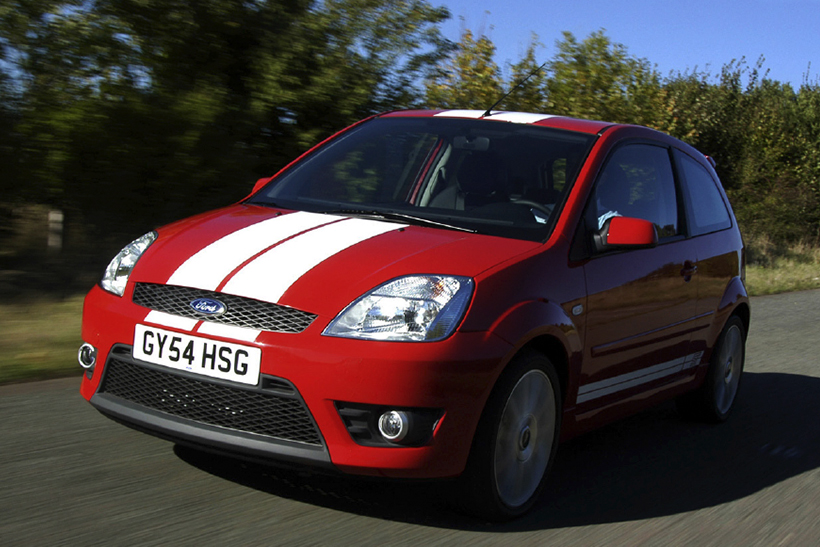 Launched in the winter of 2004, the Mk6 Ford Fiesta ST was the first car produced by Ford’s TeamRS aimed at the junior hot-hatch market. The 2.0-litre Duratec unit wasn’t the most fruitful engine in the category, nor was its mild-sounding 147bhp, but it provided plenty of shove when the going got tough thanks to 140lb ft. of torque. A variable intake and free-flowing exhaust meant bags of torque, while an uprated gearbox coupled with a lightened flywheel and quickshift enhanced engine flexibility.

Performance was good, more than what the specification suggested that is. 0-60mph was done in 7.9 seconds and it would go on to nudge 130mph flat-out in fifth. TeamRS focused on lowering and stiffening the suspension, while also sharpening the steering and uprating the braking performance with the calipers being carried over from the Focus ST170 and wrapped around 258mm and 203mm discs (front and rear respectively). 17 inch alloys wrapped in 205/40ZR rubber helped the car to grip well in the corners.

The ST treatment extended to visual differences over the base models with a chunky bodykit, suitable flared arches, bumpers and skirts and a neat boot spoiler. The interior saw a sprinkling of ST badging too, with half-leather Recaro seats badged ST and a sports steering wheel also trimmed in leather. Look around the car and you’ll be reminded of ST badges everywhere from the gearlever to the kick plates.

The biggest pull with the ST was its fun, chuckable nature. It was easy to drive, quick and capable everywhere with very usable performance. It also attracted a strong following in the modified market especially after Ford offered warranty-protected packages from Mountune which saw the power upped to 182bhp in top guise, bringing it in line with the more powerful Clio 182. The UK also saw a limited edition ST500, finished only in Panther Black, but in reality all this did was add heated seats and a carbon fibre (look) interior trim.

OWNING ONE
Given I currently own a Fiesta ST I should be able to give some good insight into owning one. One thing that should be noted is the fuel economy. The short final drive is great for punchy acceleration but is not welcomed on long journeys; with the lack of fifth gear you’ll notice your fuel economy sit realistically at 35-40mpg. It’s a fun car that can be driven hard or softly and still put a smile on your face. For relatively cheap asking prices you can have a car that retains the brilliant steering feel of a classic, with great performance.

VALUES
Prices of Fiesta STs have slowly dropped over the years and appear to be bottoming out. The favoured first car from TeamRS could potentially see values rise in the future, similar to other performance Fords of the past. At the time of writing, a working example with a short MoT and high mileage will set you back around £2000, with non-running examples starting at between £1000-£2000. Lower mileage, 12 month MoT examples that have been cared for appropriately over the years will most likely set you back closer to £4000. I bought mine in 2017 with 63k miles on the clock for £4000, this was with full service history and minimal visual blemishes bar a few stone chips. ST500s are slightly more again, requiring closer to £5000/£6000.

FORD FIESTA ST INSURING
To cover a 2005 Ford Fiesta ST worth £3500 you’re looking at £245 with £200 accidental damage, fire and theft excess through Adrian Flux. Quotes are based on a 45-year-old male, second vehicle. The car is garaged, covers 3000 miles a year and lives in an SP2 postcode. He has no claims or convictions, is a club member, and is employed as a marketing manager. Comprehensive cover quotes were supplied by Adrian Flux and include free legal cover and optional agreed value. You can get your own quote at Adrian Flux or on 0800 369 8590. 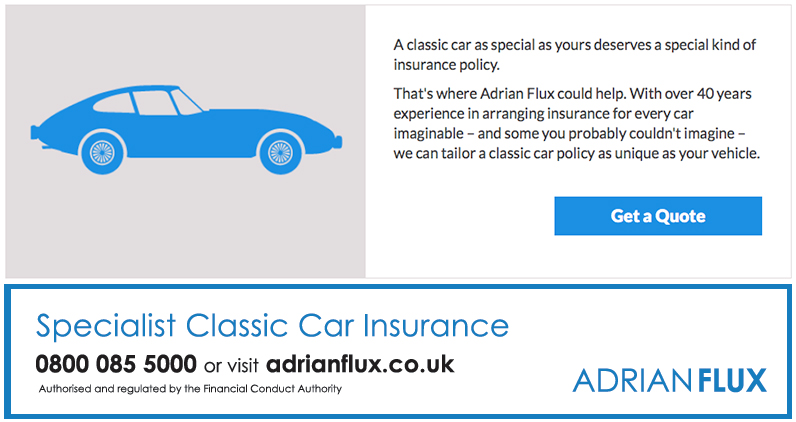