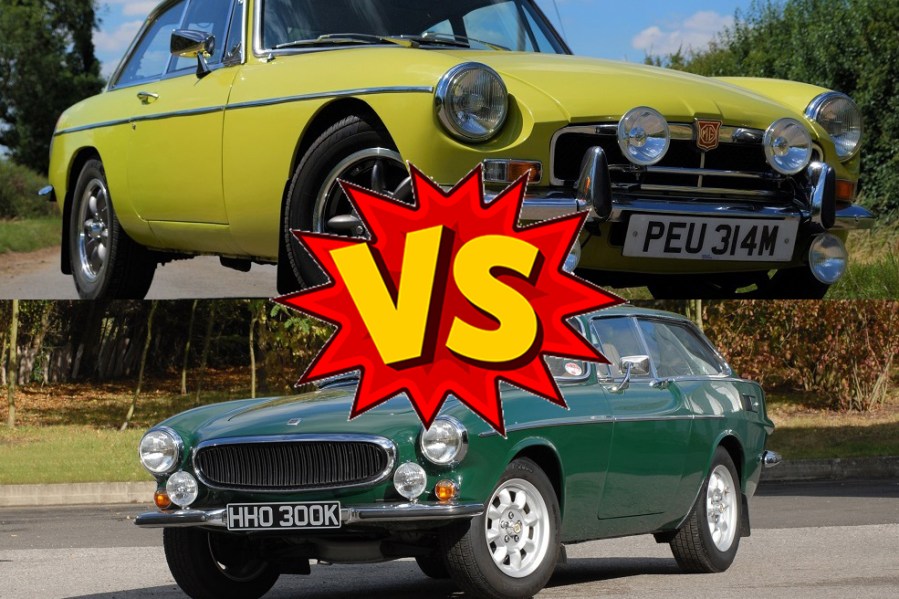 Both were stylish, practical versions of their of their established siblings, but does the quirky Volvo 1800ES make a better buy than the MGB GT?

If the MGB is the sensible classic sports car, then the hatchback GT version is even more sensible yet. There’s space for the kids in the back, and not only does the rear hatchback boot offer some more luggage space, you can fold the rear bench down to make a truly grand-touring amount of capacity. What’s more, it really doesn’t compromise the good looks. In fact, the fastback shape was already an increasingly popular phenomenon in America, and gave the GT a mature look that arguably elevated above its roadster sibling. Pininfarina did the design work and it shows, with the GT looking like something that could be wearing a much more prestigious and exotic badge. 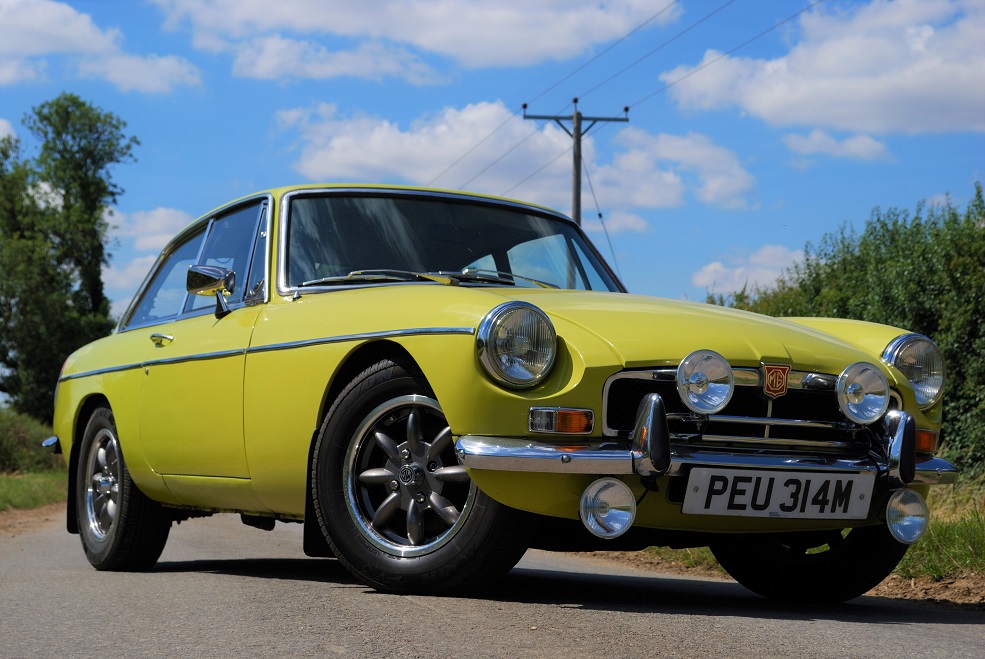 Introduced in 1965, the MGB GT was a relatively easy addition to the range with very few changes made underneath its attractive new bodywork. This meant that the GT got the same 1.8-litre B-series engine mated to a four-speed gearbox, with disc brakes up front and rack and pinion steering. The excellent driveability of the original car was retained and while the roof itself and its fittings did add weight (about 63kg), the added strength and a now standard-fit front anti-roll bar helped even more. Naturally, the GT benefitted from the various updates given the MGB range: in 1968 the gearbox was given synchromesh on all forward gears and dual-circuit brakes appeared in 1968, although it did take until as late as 1975 for servo-assistance to appear. Overdrive was optional throughout and remains a sought-after feature today. This all being said, someone needn’t worry about wearing out their braking foot or tolerating high revs on tour, because the sky really is the limit when it comes to modifying your MGB; including the fitment of the very popular Webasto-type open roofs. Styling changes were made in 1970, with the black aluminium grille preceding some minor interior changes, and then in 1974 with the once-controversial polyurethane bumpers replacing the chrome ones. 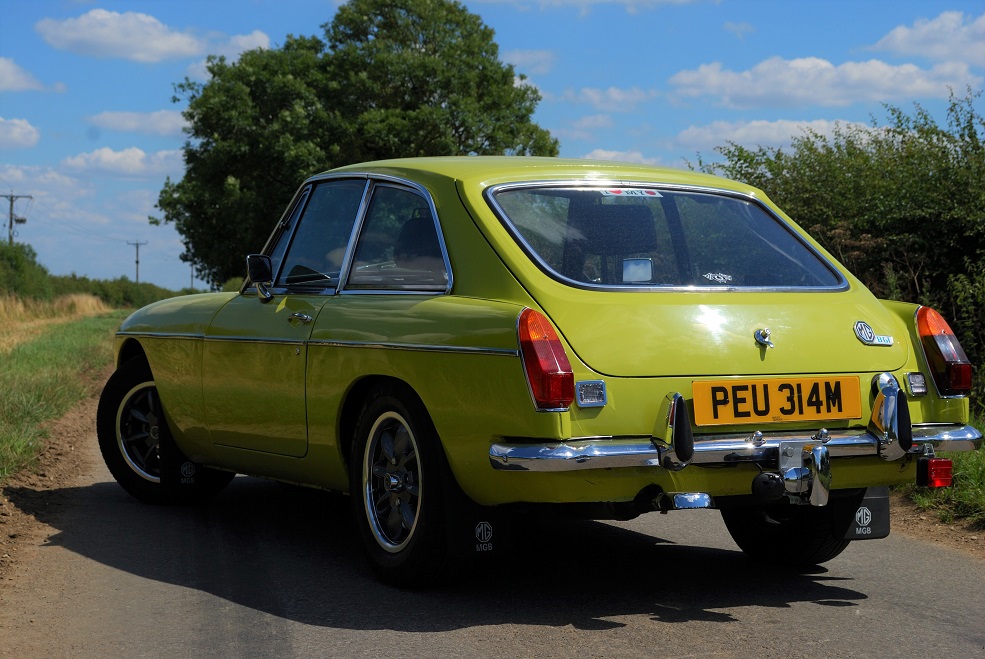 The MGB feels right from the moment you click open the door. The seat is a little short but in a way you’d expect from an old car, and the dashboard houses lots of Smiths dials with pleasant character types and charming markings like ‘rpm x100’ and ‘4cyl’ in case you wanted to know. The driving experience is how you’d expect too, giving you all the sensations you imagined of a classic car: a thrumming engine, positive feel to the controls, and a ride that’s just busy enough to keep you excited but controlled enough to make you feel safe. While some do complain about a seating position that’s too high, overall the MGB is comfortable and in the GT there is even just about enough space in the rear for two flexible adults. The GT also features a slightly higher windscreen than the roadster, so that particularly tall people will find this model noticeably better to sit in. 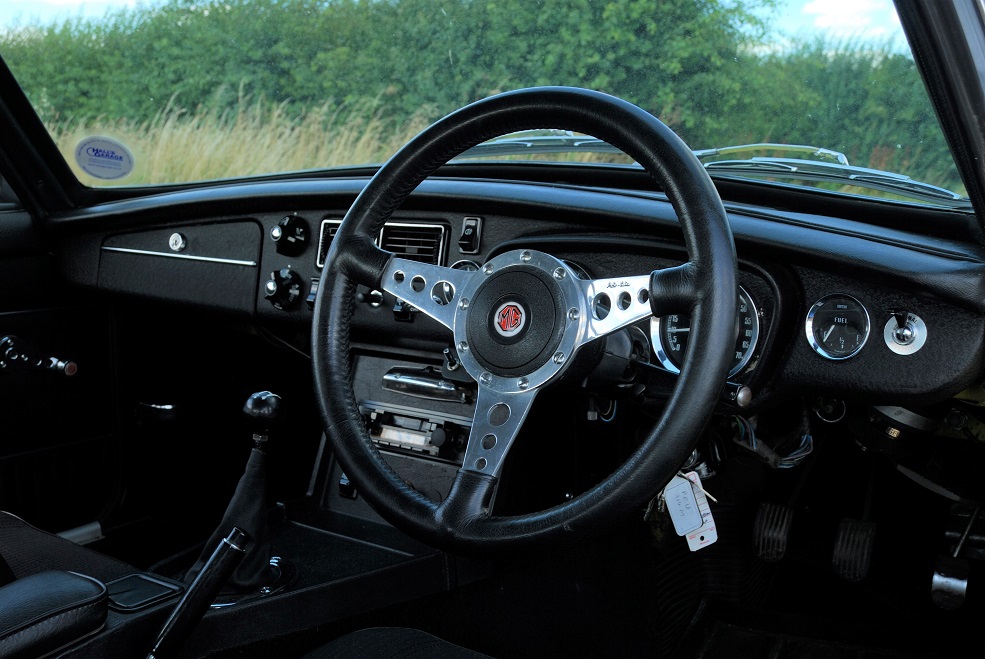 The GT was an immediate success and proved to be just as hot a seller as the famous roadster. This means that finding one today is no trouble at all, and getting into one can in fact be more affordable than the roadster. Bank on £10,000 or more for the very best, particularly if you’re considering a V8, £5000 for a very nice useable example, while as little as £2000 can buy you a promising project. 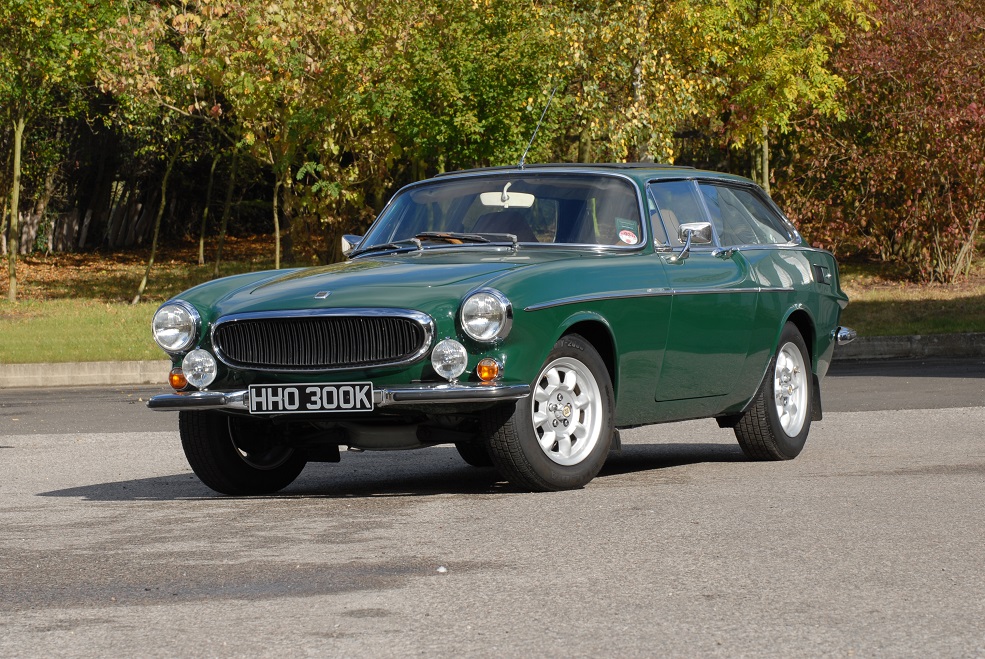 Volvo’s sports car started out as a classic sports car rather similar in layout to the MGB, except that the P1800 introduced in 1961 was a fixed-roof coupe rather than a roadster that might’ve carried on the lesser-known genesis P1900. It featured a high-specification version of the four-cylinder already seen in Volvo’s saloon cars, here designated B18. It was a 1.8-litre engine, with pushrod actuated valves just like the MGB, but with 110bhp it was considerably more potent than the MG motor, at least on paper. By 1972 the car that had started out as the P1800 sports coupe had evolved in name, technical specification and, most obviously, shape. Now named the 1800ES, the coupe had been replaced completely by a new shooting-brake body style.

The 1800ES was designed in-house and while it was clearly derivative of a sports car, it wasn’t quite the elegant figure that was the Pininfarina MGB GT. The Volvo was given a flat roof from the windscreen back to a moderately raked rear, making it more reminiscent of an estate than the MG. A big glass hatch is a dominant styling feature, particularly because it’s frameless, and has since inspired a number of subsequent models like the 480, V40 and C30. Wider taillights remain in the place of the original ones, matching the less dainty proportions of the new 1800ES. Some might call it awkward, but fans like its distinctive look. It is actually rather well proportioned, and there is no doubt that it is supremely practical – that large hatch provides wide access to a huge load area that, like the MGB GT, can be extended further with a folding rear bench. 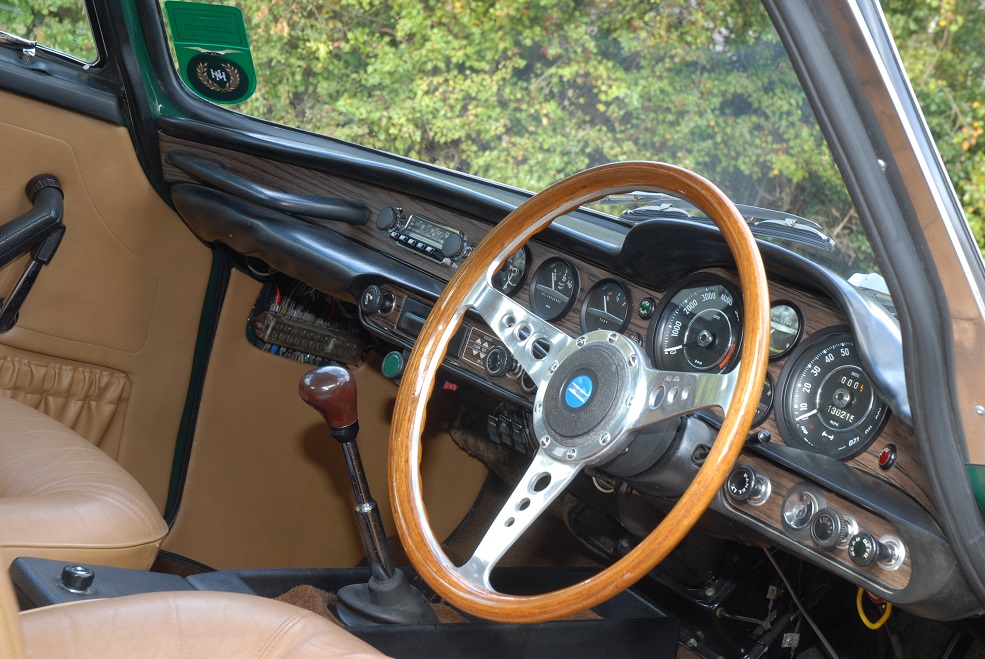 Marking the end of the 1800 line, the Volvo 1800ES was only produced for two years and therefore enjoyed all the refinements given to the series through its 12-year run. A 2.0-litre engine had been introduced in 1969, named the B20, and employed Bosch D-Jetronic fuel injection from 1970, providing a strong 130bhp. There was also the latest four-speed manual gearbox with overdrive fitted as standard.

The Volvo was more expensive and more of a luxury product than the everyman MG. But while it may be faster than the Abingdon car, it isn’t more of a sports car. Unfortunately, neither the engine nor the gearbox are of the energetic type and what’s more, the suspension is rather too soft and the whole car doesn’t offer the same sort of willing engagement as the MGB. This does all seem at odds with what is a rather sporting seating position quite low to the ground and a dashboard full of dials, even including an oil temperature gauge. Then there’s the fact that the engine is in such a high state of tune, with a compression ratio of 10.5:1; when combined with the clumsiness of an early fuel injection system, it makes the Volvo 1800ES a bit grumbly around town too. While the MGB provides a consistently charming, burbling character and simple progress, the 1800ES isn’t so easy to warm to. 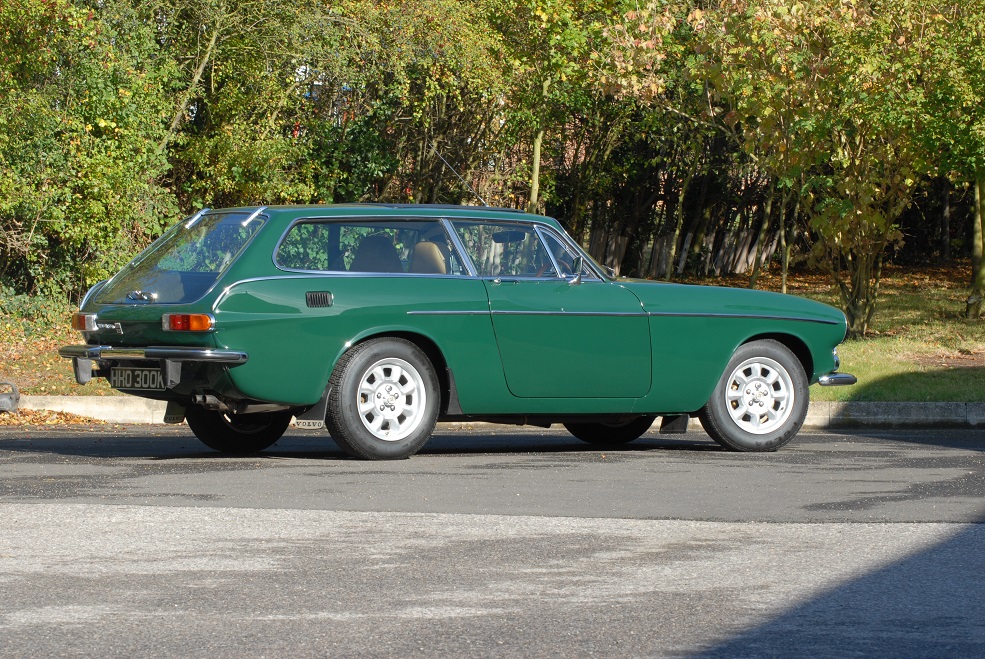 But like all good Volvos, it does earn your affections over time. It may be less of a sports car than the MGB and actually provides less room for rear passengers too, but its curious design as well as fantastically comfortable seats from a decade ahead stand out as obvious features to draw you in.

Where it gets tricky, though, is in the money. Far fewer Volvo 1800-series models were made than the MGB, and the same is true between the GT and Volvo 1800ES, so values have come to reflect that. There was a time when the ES was the less favoured model against the coupe, but in the last two decades they have both come well up above the £10,000 mark. You can still just about get a project for less, but for a nice useable 1800ES you should be prepared to spend over £12,000, and prices can easily go to £20,000.

As an investment, the MGB GT makes the most sense. The Volvo’s time has already been and gone, while today there is a sense that the rubber-bumper MGs are about to shoot up in value to catch up their chrome-bumpered predecessors. In fact, the prospect of such good value and stripey deckchair seats is even enough to sway this long-time Volvo fan. The MG has it.