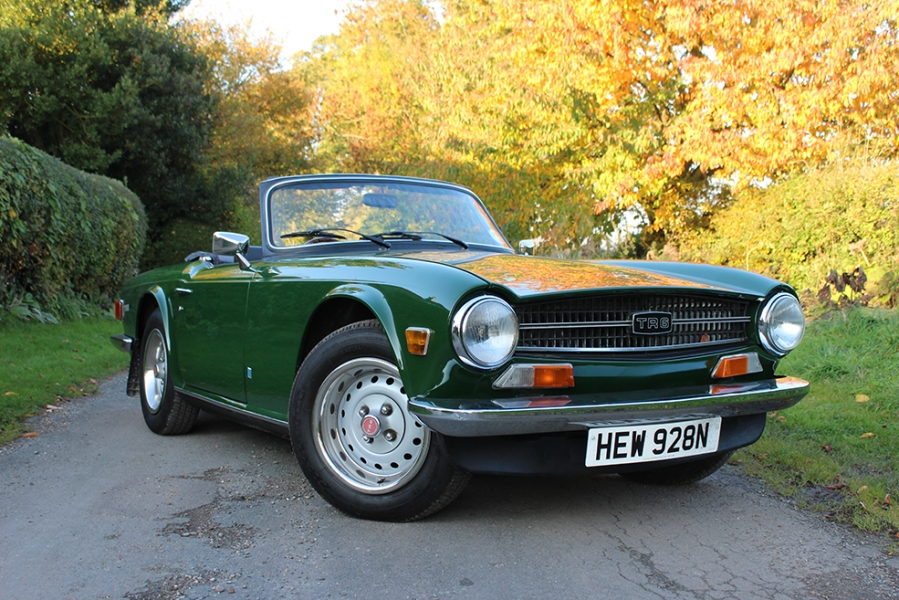 Often regarded as the last of the traditional British sports cars, the Triumph TR6 is also the last ‘proper’ Triumph. Here’s what you need to know if you’re in the market for this evergreen classic

Triumph’s cost-effective way of updating its traditional TR sports car line for the Seventies, the TR6 was essentially a neat facelift of the TR5 performed by German coachbuilder Karmann, which added a squared-off nose and tail in the style of Michelotti’s work on the firm’s saloon car range.

Introduced in January 1969,  it wasn’t a revolutionary step change for the Triumph TR series, but neither was it out of line and in many ways it was a significant car. It was much the same as the TR5/250 models underneath, with a separate chassis and a front-mounted straight-six sending power to the rear wheels through a four-speed gearbox. The TR4A of course, had introduced independent rear suspension, and since the TR4 there had been rack and pinion steering. For the first time, though, there was now a front anti-roll bar.

The obvious change for the TR6, and the source of some distaste from enthusiasts of the earlier models, was its restyled nose and tail which gave it an altogether more butch appearance at odds with the daintier look of previous TR models.

It did however neatly accommodate wider 5.5-inch wheels, bigger bumpers and larger lights. It all worked wonders for the crucial US market, where most TR6s went. Interestingly, many have returned to the UK, so we’re now accustomed to seeing the fuel-injected home market and American-spec twin-Stromberg cars in near equal measure. 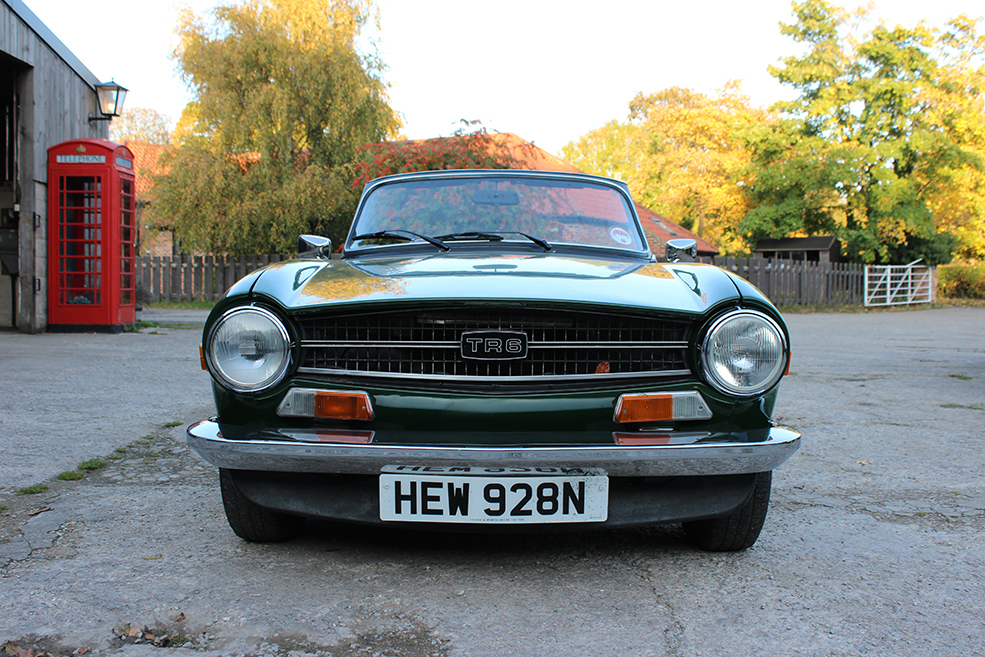 Of course, it was once common practice to convert the troublesome Lucas fuel injection system back to the conventional twin carb spec anyway. Today it is a matter of taste, because the fuel injection can be set up reliably and the carburetted versions can be tuned to make up the power deficit. From the factory, the UK cars made 150bhp via Lucas injection, and the US-bound cars restricted to 105bhp by their carb jets.

The earlier cars have commission numbers beginning CP or CC – the first denoting petrol injection, the latter carburettors. In 1972, the revised CR/CF series was introduced, which featured a new camshaft profile and a reduced compression ratio drop from 8.5:1 to 7.75:1 that brought the UK models down to 125bhp.

There was also a new exhaust system to go along with this change, plus the fuel tank was reduced from 11.2 gallons to 10.25 gallons, and, at the end of the year, the rear springs and wishbones were uprated. 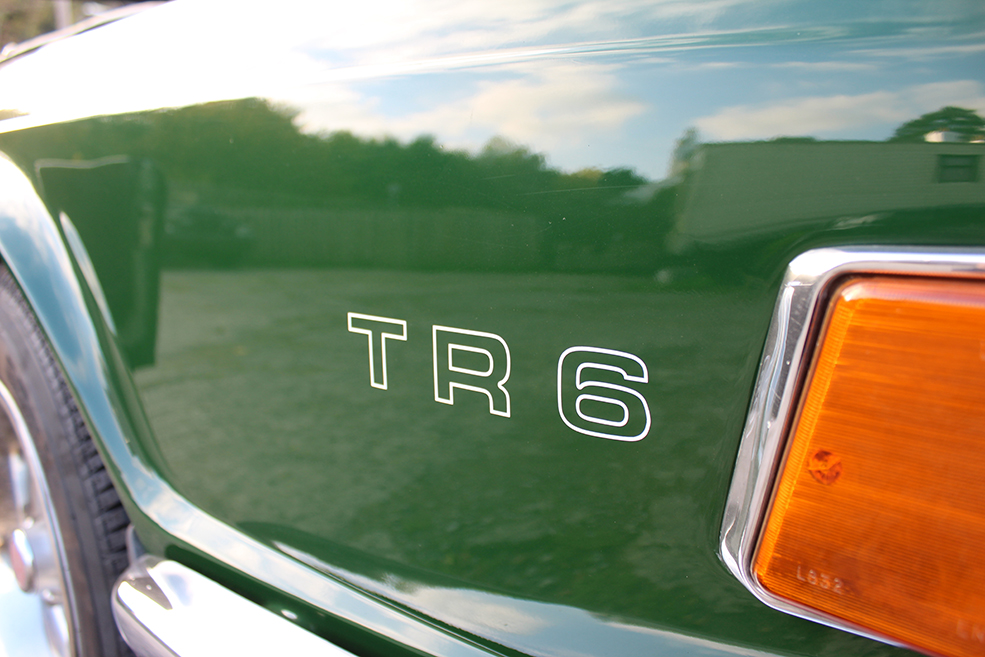 In fact, the TR6 was subject to change every year of its production, between 1969 and 1976. Cars made in the very first year can be identified by their body-colour windscreens and chrome engine covers, while 1970 models added a whole raft of changes that included revised pressed steel disc wheels and an option of 72-spoke wires, plus there was a new inlet manifold on US cars. From then on, windshield surrounds would be black and engine covers painted. In 1971 a few components from the Triumph Stag made it into the gearbox and a steering lock was fitted.

For 1973 we saw a new front airdam fitted, the wiper arms became matt black instead of chrome and the air intake became a black plastic item, while a stainless strip was added at the top and bottom of the grille. Union Flag decals also replaced the TR6 logos on the rear wings for American markets. On the inside, head rests were now standard and the switchgear and instrumentation was revised. 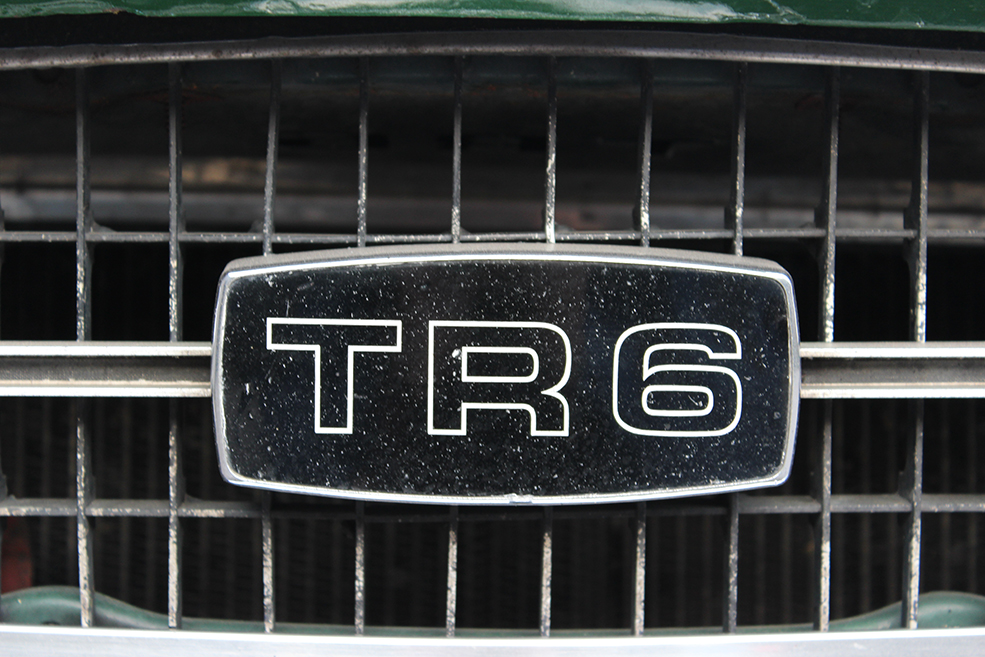 For 1974, the previously optional overdrive became standard, and did a tonneau cover. Then, in 1975, we got a raised front bumper with accompanying lower indicator/side light units, while in the US rubber bumper overriders were fitted. Of course, it has to be noted that this is all how the cars left the factory, not necessarily how they are today.

Beyond your usual checks for the corrosion and at worst rot that can well be present on a 50-year old car, the TR6 does have some specific areas that demand your attention when looking to buy. The worst of the chassis rust tends to occur on the sills and at the rear.

Check all along the sills, also paying attention to the floor panels and the mounting points for the rear axle. We asked Gary at Triumph TR specialists TRGB what exactly to look for, and he advised us that you have to inspect the T-shirt shaped pressing that goes over the top of the axle, but also the two trailing arm sections can rust from the inside out. How do you spot it? “Look for swelling around the bolts, that’s how they start. If they let go, fixing it can involve taking the body off.”

It’s always a good idea to inspect the outer panels for signs of poor repairs or even just how the car sits. The TR6 was never finished to the most exacting standards, but if it looks off you should exercise caution. Again, Gary gave us the low down: “don’t expect panel gaps to be perfect” but “if the door gaps are opened up at the b-post, that’s a sign that the chassis is starting to sag. It’s actually the opposite to most other open-topped cars. You see, the way the Triumph TR6 is made is that the weight hangs at the back.” 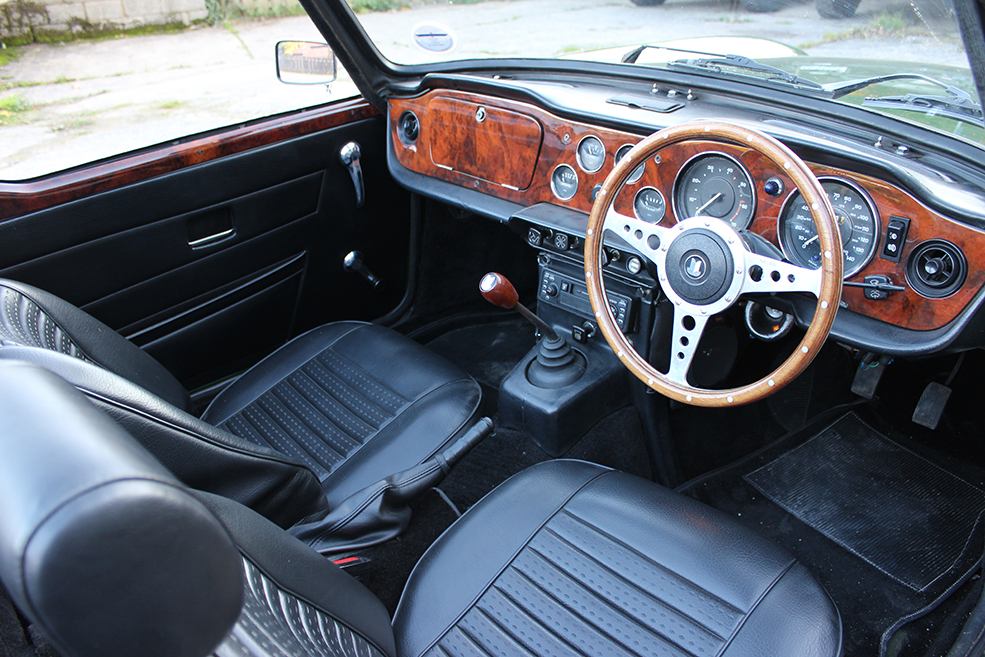 Another vulnerable point is where the rear wings bolt to the deck, where Gary says that “three layers of metal go together in a sandwich. Dirt and all sorts gets kicked up from the road and gets trapped here, and will eventually rot them out.” This can be a tricky area to make a repair, because of the outer, inner, and deck joins, but once sorted an easy long-term solution is to just protect it with a wheel-arch liner.

Other areas that seem to be susceptible to corrosion include the b-post backs, the front wings around the headlights, the leading edge of the bonnet, and the rear lip of the boot lid. Many cars will have had resprays in the past, so the degree to which the bodies have rusted will largely depend on the quality of the job done as well as how long ago it was. 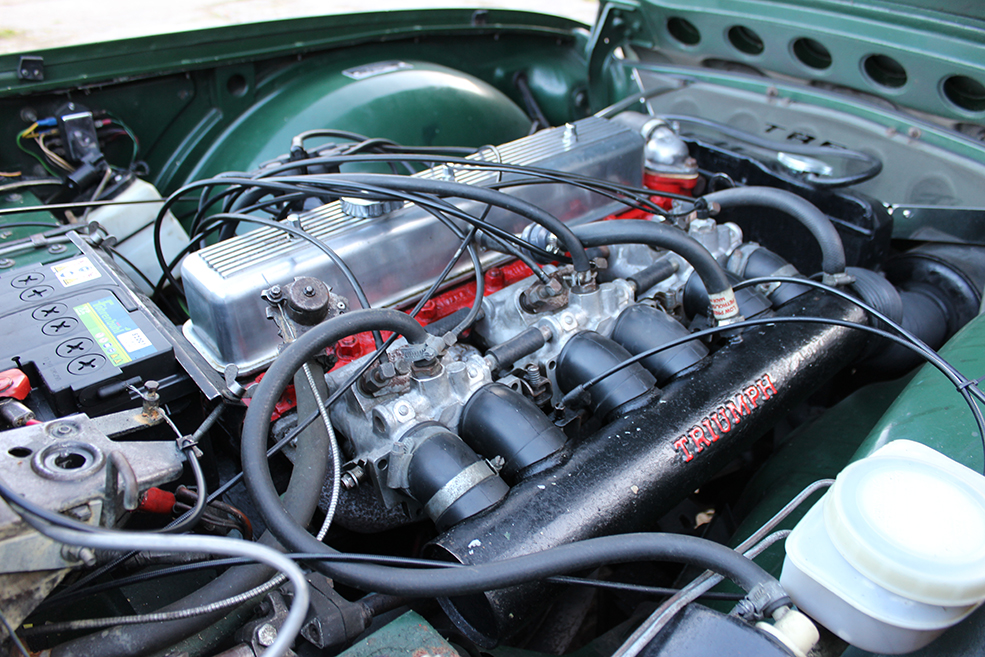 The straight six is generally a reliable unit, provided it has been maintained properly. One particular thing that needs to be kept on top of is the crankshaft endfloat, which if left unchecked can end up causing big damage. Gary knows all about this issue, and explained that to avoid a full rebuild you have to catch it early when the problem can be sorted with the engine in situ. A good check to make here is that there isn’t excessive play in the engine pulley when the clutch is operated.

Other things to note include the sensitivity of these engines to ignition and camshaft timing, and injection engines benefit from uprated fuel pumps, so it’s always nice to see a car that’s had an owner aware and active in these areas.

The drivetrain can show wear and sometimes damage from abuse. The most vulnerable area is the rear axle, where differentials tend to leak. Gary has seen plenty of cars come into TRGB with this kind of wear and says the driveshafts are notoriously problematic.

Fortunately, parts are available so you can always sort it, but with the driveshafts it can be worth just upgrading. TRGB finds that its CV conversion for £840 a pair, including the hub (plus VAT) is rather popular. Listen for clunking from the rear end to point you to these problems, though consider that the differential mounts can also let go and cause similar symptoms.

The gearbox is from the Triumph TR4 and while minor changes were made through the lifetime of the TR6, they can still fall victim to harsh use. Gary explains “the layshaft bearings go, causing noise in first, second and third. You also have to watch for the clutch release bearings, which just don’t last. If you’re doing 60,000 on them you’ll be lucky, because if you’re driving your TR6 enthusiastically they tend to only last 12,000-20,000 miles.” 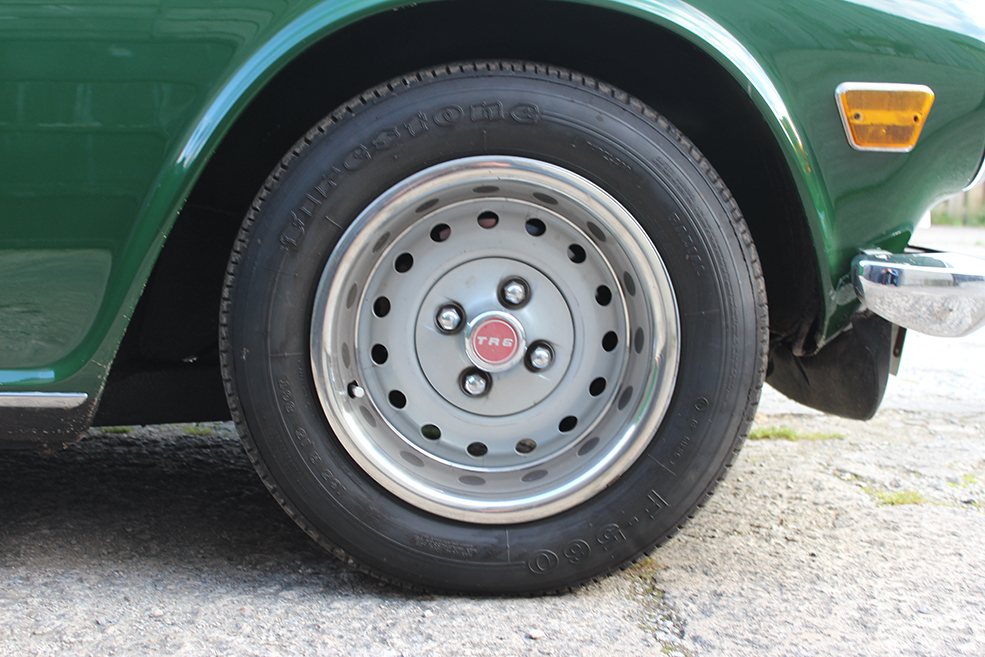 The Triumph TR6 is sprung independently at all four corners, on coils with lever-type dampers. The rear in particular can be improved with fresh components, especially suspension bushes.

“We tend to recommend polybushes, just not on the differential, and we quite like GAZ adjustable shocks as an upgrade” says Gary. “We’ve also had new springs made for us recently, by a British manufacturer in a new material, chrome silicon”. The availability of components is getting better every day, and now you really can set your TR6 up for anything from touring to full on track work. Dampers are often updated to the telescopic type for either purpose.

While prices for new components tend to be pretty reasonable, if you’re viewing a car needing lots done, just be wary that the costs can soon mount up. Regular maintenance is required of the front suspension, where the trunnions need to be kept lubricated.

The factory advice was to give these attention every 1000 miles, but most enthusiasts and also TRGB have an updated perspective. “We put in hypoids and then grease them. The trunnions will always leak out, so we tend to use grease as the primary point of maintenance, about every 6000 miles or depending on wear.” 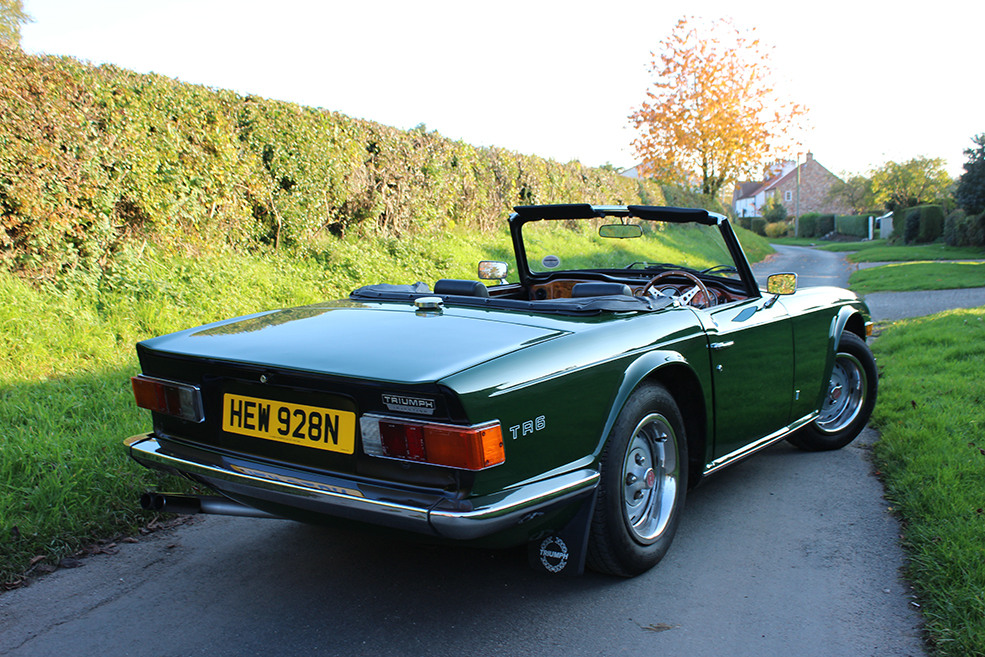 The wealth of expertise and variety of parts out there means that anyone with a Triumph TR6 can not only restore their car from the ground up but make it into whatever they like, whether that is a mixture of model years or something entirely more ambitious using the excellent range of aftermarket products out there.

In fact, the Triumph TR6 is one of the most attractive in the TR series for modification because it can respond so well to it. The lower-tuned engines in particular have plenty of performance to unlock, and so too does the chassis. With some suspension modifications, particularly polybushes, or even Mazda gearboxes, you can end up with a sports car that can worry much more modern machinery.