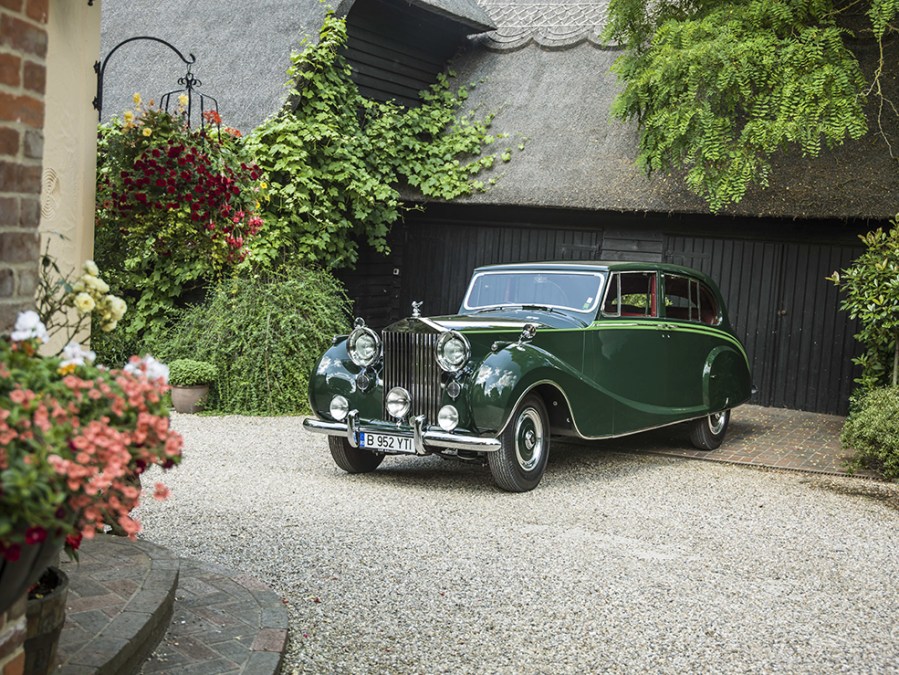 The modern Bentleys produced under Volkswagen ownership are a very different beast from the super-luxury Rolls-Royces currently made by BMW in Munich and assembled in Sussex, but for most of the second half of the 20th century this wasn’t the case.

Prewar Bentleys may have had a proud tradition of engineering excellence and motorsport success but it wasn’t enough to keep the firm afloat financially and in 1931 the firm entered receivership and set in chain a series of events which would trigger big changes to the brand.

It was acquired by a company called British Central Equitable Trust which turned out to be a front for none other than Rolls-Royce, buying its competitor purely to remove it from the market. The firm’s premises in Cricklewood, north London were sold off and production of Bentley cars even ceased for a couple of years, with W O Bentley himself leaving the business.

Car production had been halted during WW2 while Rolls-Royce’s aero-engine expertise came to the fore but work on the cars had carried on when time and resources permitted. Inevitably though, the pressures of postwar austerity required rationalisation and gradually the two marques would come closer together as cost savings were pursued. Initially it was actually Bentley which was the bigger seller, thanks partly to its less ostentatious nature and this was further encouraged by the development of a standard body style, itself less flashy than the traditionally coachbuilt cars.

The first of these was the Bentley MkVI, launched in 1946 as the ‘Standard Steel’ saloon and which brought Rolls/Bentley rapidly up to date in line with more mainstream manufacturers. A Rolls-Royce equivalent was launched very shortly afterwards as the Silver Dawn and eventually the Bentley and Rolls-Royce models differed only in their grille and minor detailing – a situation which would persist into the era of the Spirit and the Mulsanne during which Bentley would once more emerge as the dominant marque.

The postwar years are an intriguing time for the two brands as the plan to rationalise the two marques slowly took shape and it can get confusing, so we’ve simplified the era which took the firm from Merlin engines to the famous V8. 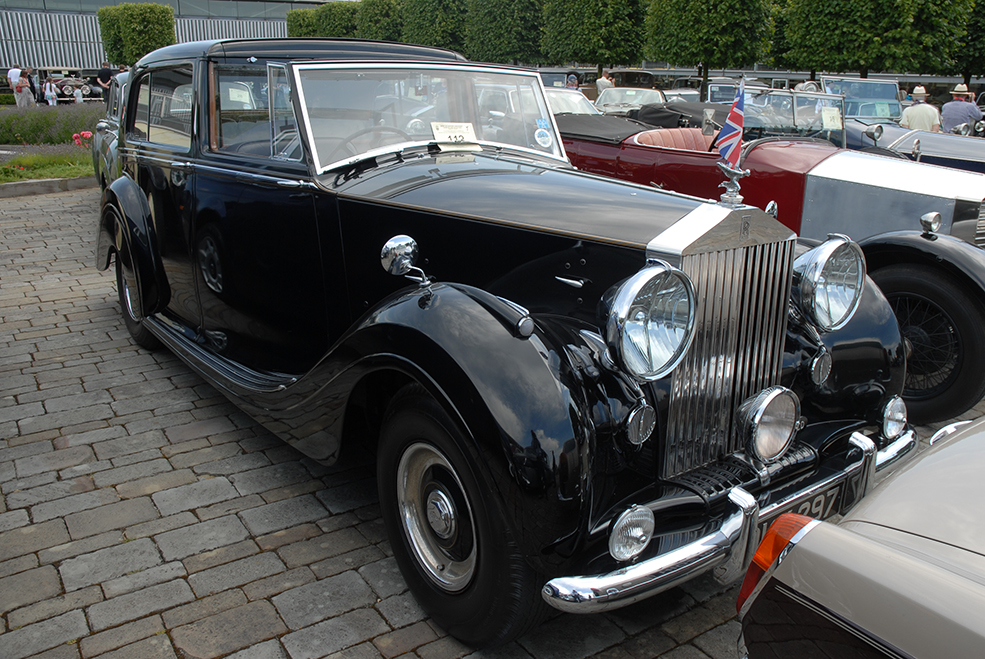 Launched simultaneously with the standard steel-bodied Bentley MkVI, the Silver Wraith was offered only in chassis form in the traditional Rolls-Royce style.

The Wraith was the marque’s first postwar model and the first car to be constructed in the Crewe plant which would become synonymous with the Rolls/Bentley brands until the new millennium and is still the home of Bentley today. The facility on Pyms Lane had originally been established as part of the wartime Shadow Factory scheme to manufacture the Merlin aero engine and went from farmland to production in just five months, but when the war ended Rolls-Royce’s aero engine operations were consolidated at its Derby facility.

The Wraith sat on an all-new 127-inch wheelbase chassis which was also found under the Bentley albeit with seven inches taken from its length. With coil-sprung front and leaf-sprung rear, the Wraith was powered by a development of the prewar straight-six engine using an ‘F’ head inlet-over-exhaust layout similar to contemporary Rover engines. Produced as a 4257cc unit, it drove through a standard four-speed manual gearbox, with a General Motors automatic offered from 1952.

From 1952, a 133-inch wheelbase version was offered which by the following year would replace the short-wheelbase model entirely and Wraith production would be discontinued in 1958 when it was replaced by the Silver Cloud II. 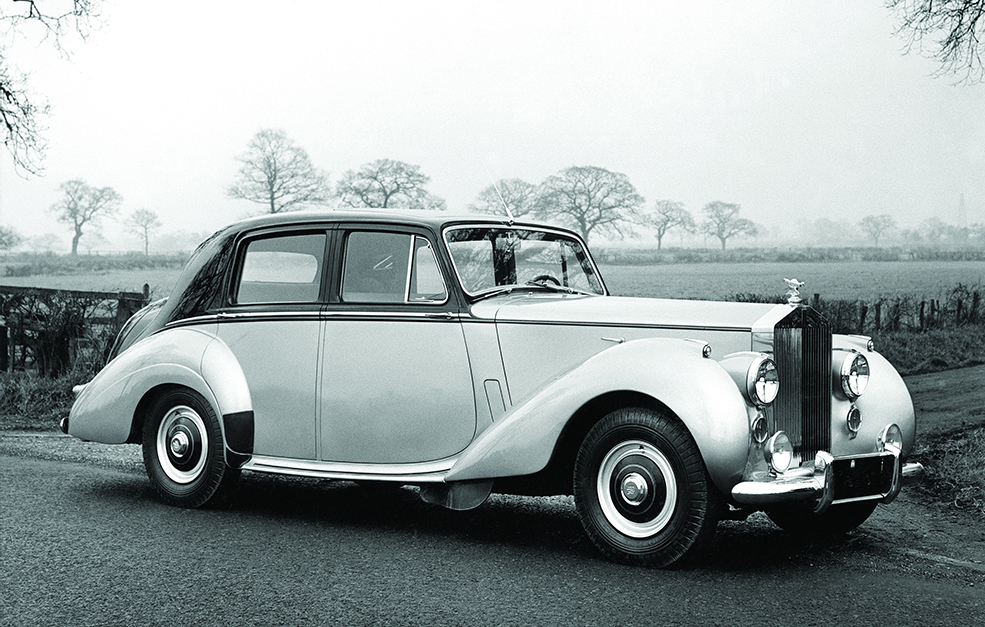 In a reverse of the system employed in later years, the Silver Dawn was essentially a badge-engineered version of the Bentley MkVI and was developed primarily for export, with domestic-market cars not offered until October 1953. Using the chassis and engine shared with the MkVI and the Wraith, the Dawn also shared the F-head straight-six engine but since it shared the standard steel bodywork with the Bentley it gained the distinction of being the first Rolls-Royce to be supplied as a complete car from the factory. A comparative rarity, production numbers were low even for Rolls-Royce with just 760 cars produced. 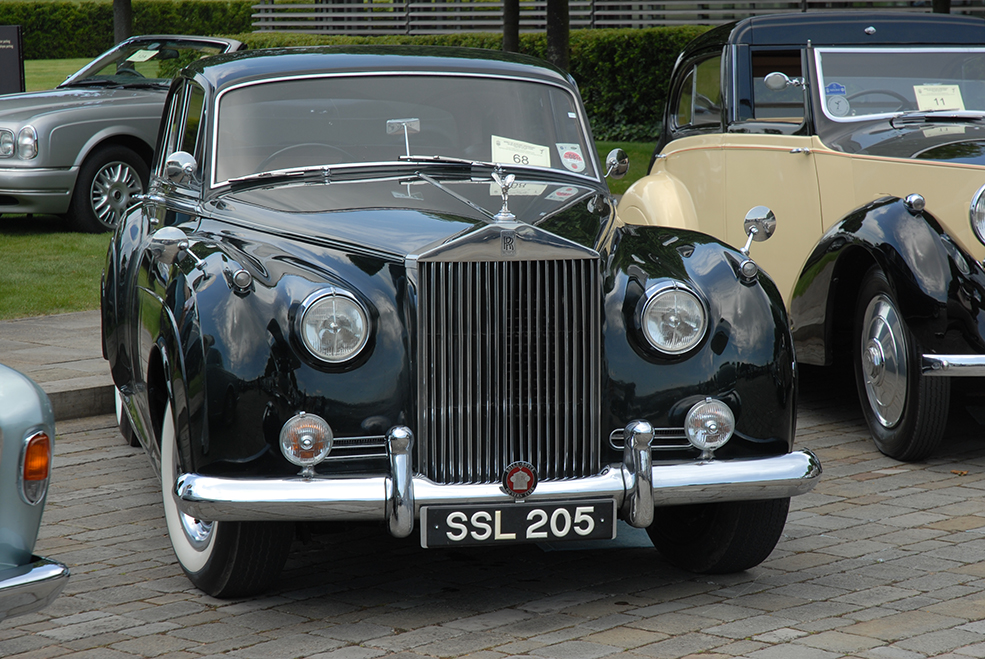 The Silver Cloud marked the point where Rolls-Royce really began to get back into gear after postwar reconstruction and also marks the start of the modern era for the firm. Recognising that the standard steel body offered on the small-volume Silver Dawn and on the Bentleys – at that point still the bigger sellers – was what customers wanted, the company offered the Cloud from the start as a fully factory-built car.

Initial attempts at styling ‘Project Siam’ by in-house designer John Blatchley majored on toning down the traditional Rolls-Royce grandeur for something more in keeping with the times but when his design was rejected by the board he later admitted to having rushed out a quick redesign in just a few minutes which found favour and became the production car. This cleverly combined a hint of prewar separate wings with the modern integrated style, while a curved single-piece screen was another modern touch.

The car would be launched in 1955 with the inlet-over-exhaust straight-six carried over from the Wraith and Dawn, but in 1959 Rolls-Royce’s newly-developed V8 engine would be debuted in the Silver Cloud II. The new engine produced some 200bhp and despite its bulk, the lightweight aluminium closing panels and steel body saw the Cloud tip the scales at 2100kg, giving it respectable pace. The Cloud was also the first Rolls-Royce to feature hydraulic brakes all round, with a mechanical servo ensuring low pedal effort.

The L-Series V8 would go on to power the firm’s products until 2019 with only a small break during the BMW-powered Seraph/Arnage era. The Cloud would have the distinction of being the last volume-produced separate-chassis Rolls-Royce, since it was replaced by the Silver Shadow in 1965. It would also be notable for being the first postwar Rolls-Royce model to outsell its Bentley sibling as the country’s economy recovered towards the end of the decade. 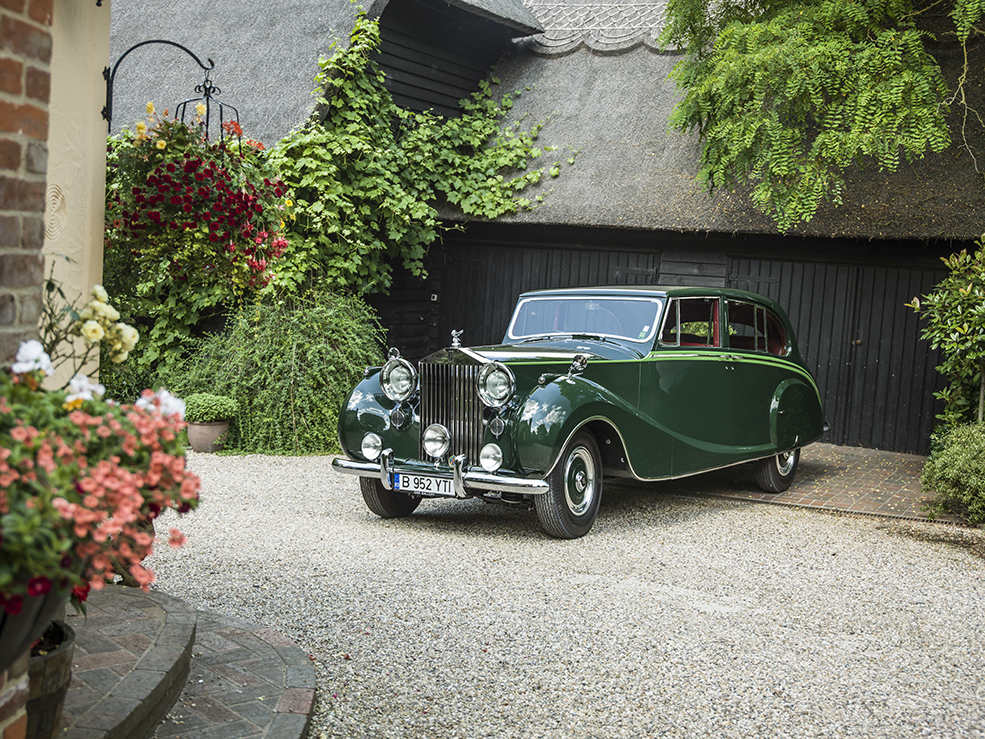 If any model was likely to be out of step with a world ravaged by war, the opulent Phantom was the one. Traditionally reserved for heads of state, the model was only revived in 1950 after a request by the Duke of Edinburgh to test an experimental straight-eight Bentley gave Rolls-Royce an opportunity to seize the Royal Warrant from Daimler.

Using an extended version of the MkVI/Wraith chassis, the Phantom dispensed with the V12 of prewar Phantoms in favour of a straight-eight engine derived from military and commercial designs – the advantage being its ability to run for long periods at low speeds in parade duties. Only 18 of the Phantom IV would be produced until the car was replaced by the slightly less exclusive V8-powered Phantom V in 1959. 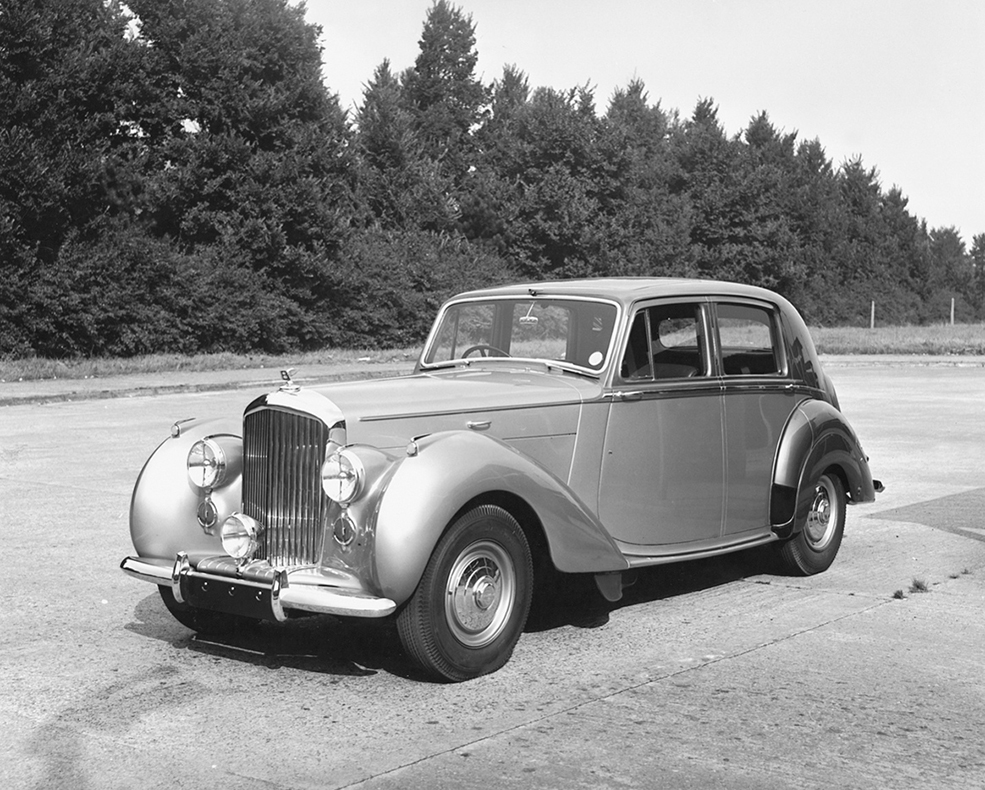 Launched in 1946 as the ‘Standard Steel saloon’, the MkVI brought Rolls/Bentley rapidly up to date in line with more mainstream manufacturers. Until this point, the firm’s cars had been delivered only as rolling chassis, the convention being that the buyer would then specify his own bodywork.

It was a product of the times: the war wasn’t long over and the climate of austerity made ostentatious displays of wealth undesirable. The neatly proportioned lines of the car and its less symbolic Bentley grille allowed it to slip by without creating much more fuss than a Jaguar or Alvis. A Rolls-Royce equivalent was launched very shortly afterwards as the Silver Dawn.

Power came from a 4.6-litre version of the inlet-over-exhaust straight-six found in the Silver Wraith and Silver Dawn. 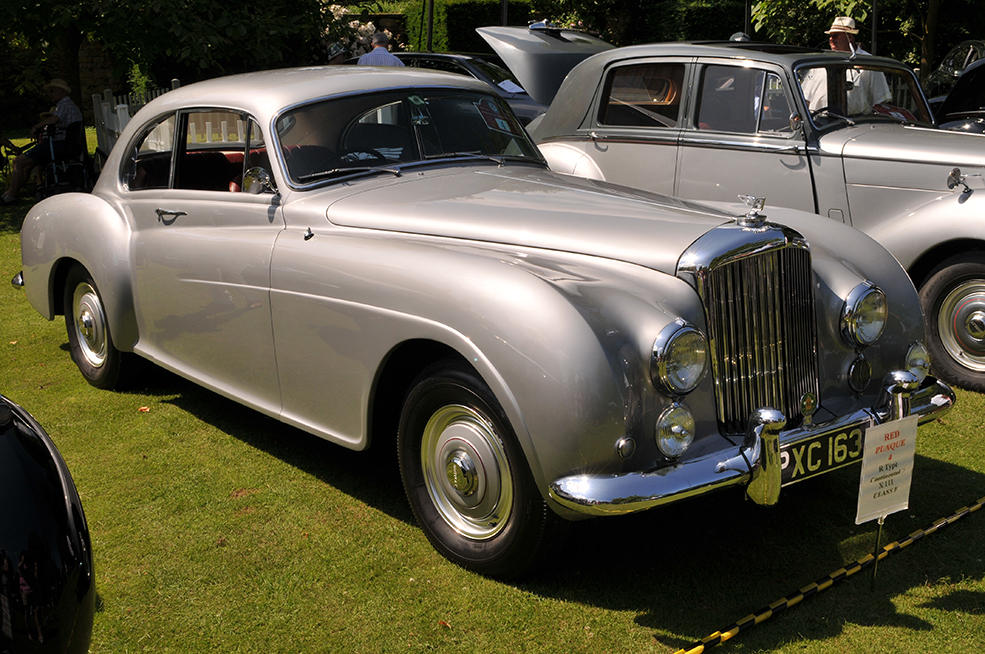 In 1952, the MkVI was revised – facelifted we’d call it today – to gain a larger boot and other detail differences, becoming known as the R-Type.

Although the R-Type was still mechanically identical to the Rolls-Royce Silver Dawn, it was offered in elegant coupe form as the Continental, with bodywork created by Park Ward. Interestingly, Bentley was still the most popular brand, with the R-Type outselling the Silver Dawn by almost three to one. 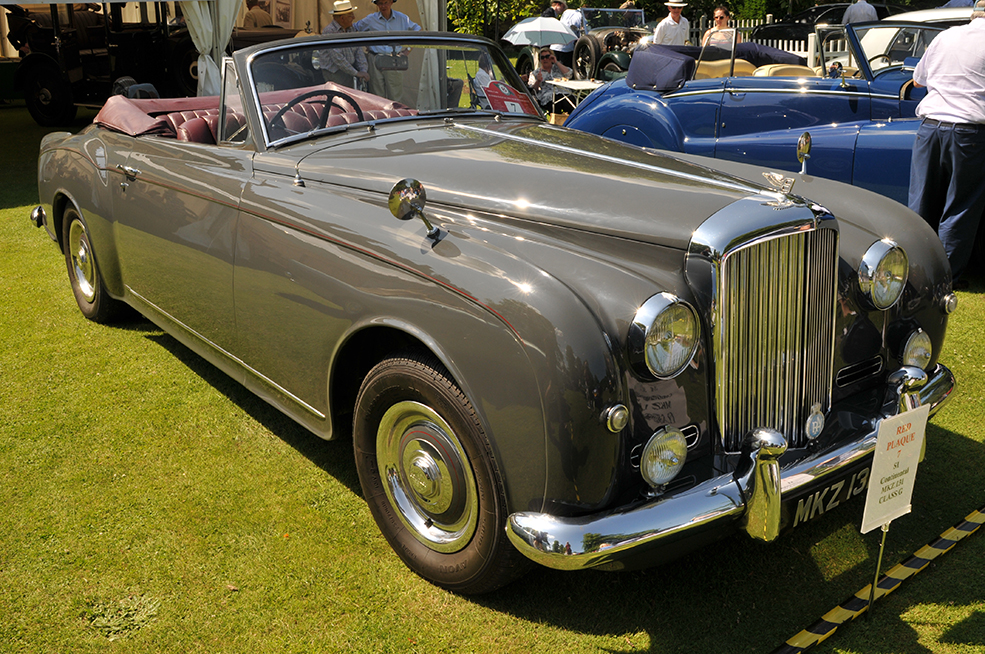 The R-Type was something of a stopgap though and in 1955, the S-Type was launched in parallel with the Rolls-Royce Silver Cloud. Once again, standard bodywork from Pressed Steel was employed although retaining a separate chassis allowed the increasingly less popular option of coachbuilt bodywork for those buyers still wanting it.

The S1 would become the S2 in 1959 when it gained the V8 engine and then the S3 from 1962 with a revised four-lamp front end. The two cars were launched simultaneously, marking the point where Bentleys finally ceased to be separate models, with the S3’s replacement being a Bentley-badged version of the Silver Shadow marketed as the T1.