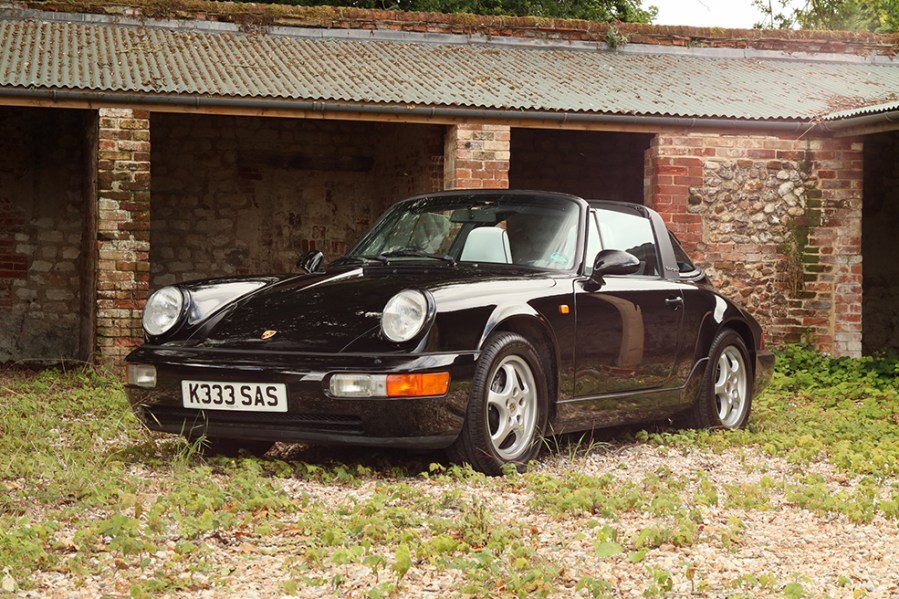 Looking very much like a classic Porsche 911, the 964 model was the first generation to bring significant updates to the tried-and-tested formula

The world of the Porsche 911 can be a confusing place, not least because the Porsche has retained the ‘911’ badge for over numerous successive generations since the original 1963.

The most obvious departure from the classic air-cooled 911 with its Beetle-esque silhouette was the 993-generation car, launched in 1993 as the last of the air-cooled cars. Before the 993 came the 964, which may have looked very similar to the classic 911 but was – or at least, Porsche claimed – 85 per cent new.

The accepted version of events is that efforts to replace the 911 with an altogether more modern and more conventional car – think Porsche 928 – had been unsuccessful in the market and so the decision was taken to radically update the original. The 964 was a clever reworking of the original which at a glance looked very similar to the familiar 911 but used a platform which was some 85 per cent new.

Such an extensive update allowed Porsche to find the space for a proper heating and air conditioning system – the original relied on a Beetle-style system of blowing hot engine air across a heat exchanger in the exhaust system – together with improved crash safety, ABS, airbags and power steering.

The chassis also received its first major revision since 1969 with the rear end replacing the torsion bars and trailing arms with coil springs, while the front end also adopted coil springs instead of the torsion bars. In a tacit nod to the fact that even a longer wheelbase and coil springs still hadn’t entirely tamed the vices of a powerful rear-engined car, a four-wheel drive model was also introduced, while anti-lock brakes were standard fitment.

The Carrera 4 was in fact the first of the new model to be launched, offered in coupe, Targa or cabriolet guise and powered by the 3.6-litre air-cooled flat six in 250bhp guise.

The rear-drive Carrera 2 was launched the following year, with the same 250bhp engine, followed in 1991 by the Turbo, which used the 3299cc engine rated at 320bhp.

In 1992 the range was broadened with the Carrera RS which used the non-turbo 3.6 motor boosted to 260bhp alongside a stripped-out interior, alloy bonnet and seam-welded shell plus uprated suspension and brakes. The 964 range received a dramatic swansong in 1993 with the limited production Carrera RS 3.8 which boasted 300bhpfrom the normally aspirated 3.8 flat six, while the Turbo was bumped to 3.6 litres and 360bhp before any remaining echoes of the classic 911 were banished by the 993.

Volkswagen may have proudly boasted that air can’t boil and can’t freeze, but despite its traditional powerplant there are still plenty of ways for the Porsche 964 to trip up the unwary buyer. 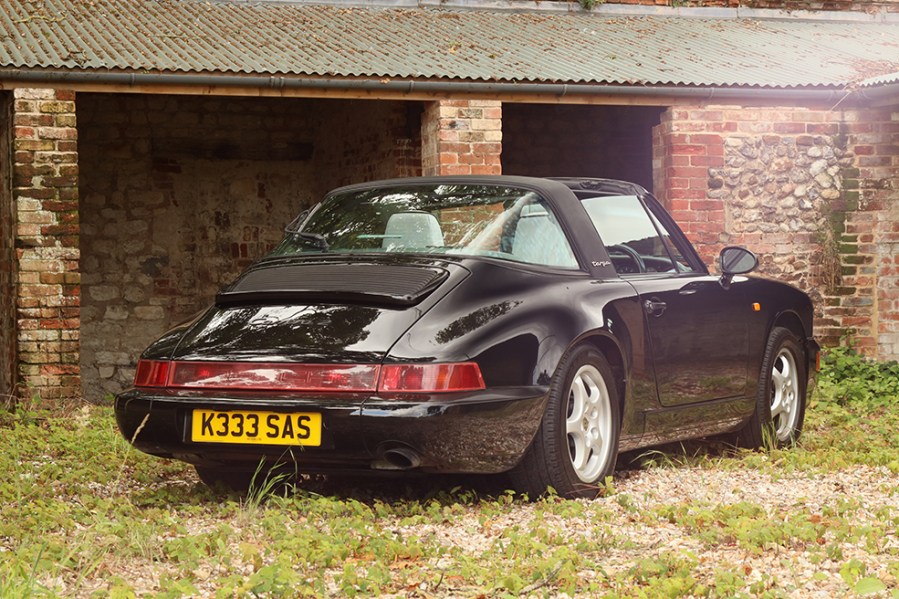 Porsche produced the 964 using a galvanised bodyshell and they’re a well-made car with suitable body protection for the northern European climate. As a result, they don’t tend to rust, although well-used examples may need tidying up around the arches, under the headlights where the front-end gets stone-chipped and around the door bottoms.

It’s also worth checking around the front and rear screens for bubbling under the seals, but by and large excessive corrosion would point to accident damage.

By the time of the 964, Porsche had refined its air-cooled flat six to a point where it was a reliable as you’d expect from German engineering, but the 964 did gain a reputation for oil leaks. It’s partly down to the decision to do without cylinder gaskets on the earlier engines, which can then seep oil from the joint between barrel and crankcase. A gasket was added from 1991, but although the problem was improved it didn’t always solve it entirely.

The Porsche engine also uses a dry sump lubrication system with a separate oil tank instead of a conventional sump and the pipes between the oil tank and the engine itself can be a source of oil leaks.

Another issue to afflict early engines is the failure of the dual-mass flywheel, a bugbear of so many modern cars. A two-part sprung design, the DMF is designed to improve driveline refinement but when they fail the result can be noticeable rattling and vibration at low engine speeds; in extreme case they can fail catastrophically. The problem in the 964 relates to the Freudenberg DMF which was replaced in 1992 by a LUK-supplied part which is reckoned to be far more reliable. Porsche specialists reckon that most of the troublesome units will have been replaced by now, so check for this in the history.

One oddity of the engine’s horizontal layout is that it uses a separate distributor for each bank of cylinders, but only one distributor is driven from the engine, with a toothed belt linking the two. When the belt ages or perished – said to be down to a build-up of ozone inside the distributor cap – it can fail and although you won’t be stranded, the engine can run drastically lean on the affected bank. Look for evidence of the belt being changed and if the vented distributor modification has been fitted then that’s a sign of an understanding owner. 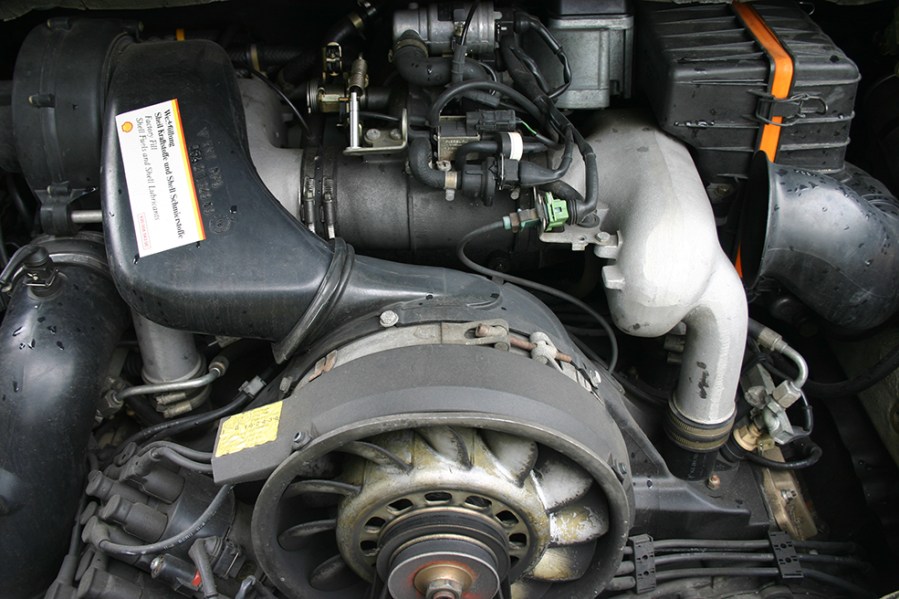 Failing cylinder head studs have also been considered a weakness on the 3.6 engine, but this has been largely exaggerated and isn’t as big a problem as urban rumour might suggest.

As the cars aged, they gained something of a reputation for using oil, with a corresponding drop in performance, often around the 100,000-mile mark.

As a result, many higher-mileage cars will have received an engine rebuild which is very much a plus point for a buyer today.

The Carrera 4’s all-wheel drive undoubtedly made it easier and safer for the average driver to access the 911’s performance, but it came at the cost of noticeable understeer and numb-feeling steering. If you’re after the classic 911 experience, it’s worth trying both two and four-wheel drive models as they are surprisingly different in character.

The 964 was also the first to offer Porsche’s much-hyped Tiptronic gearbox – on the Carrera 2 only – but this in reality was little more than a regular torque converter automatic with a manual control. It’s a reliable system and any problems will be obvious but the automatics are generally less sought-after. 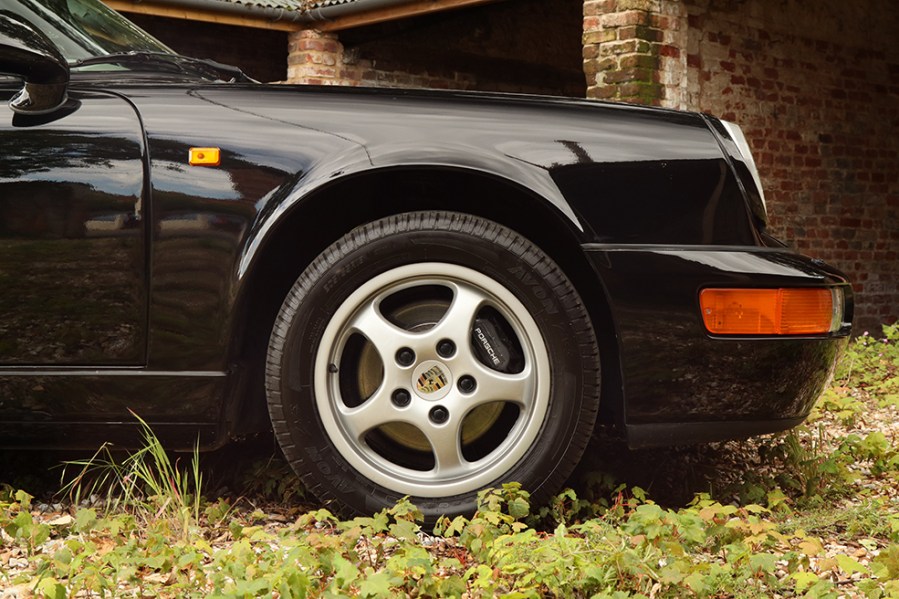 The move to coils made the 911’s chassis far more conventional and in truth there’s not a huge amount to go wrong apart from perished wishbone bushes. The items at the front tend to suffer first and replacing them is a relatively inexpensive job which can sharpen up the front end massively.

Likewise, front balljoints are a relatively affordable part and will also cure a tendency to wander at speed, while a low-speed clonk will often be the anti-roll bar bushes which are an easy DIY job.

The 964 was the first of the 911s to offer ABS braking which can be a bonus given the light front-end weight of these cars which makes it all too easy to lock up the front wheels in the wet.

Like so many first-generation systems though it can be troublesome, more so on the Carrera 4 which employs a more complex system to accommodate four driven wheels. A replacement ABS hydraulic pump is hugely expensive – think upwards of £3000 from Porsche – but may not be necessary, since issues with the ABS can often be cured by cleaning or replacing the accelerometer on the central tunnel. Either way, the ABS light should come with the ignition and go out with the engine running. Wheel speed sensors are around £115 and often problems with the system can be down to the link wires connecting the sensors to the wiring loom which can get damaged. These are a DIY job to replace, although the link wires themselves are costly.

As with all cars, you can experience problems with sticking calipers and similar, although further problems can be caused by the aluminium calipers corroding where they meet the steel mounting. Remanufactured calipers are around £300 but piston and seal rebuild kits are available from £38 for a front brake and £150 for the rears.

Genuine Porsche brake discs are over £200 each, but quality aftermarket parts are more affordable at around £120 a pair, with pads at £65 an axle set. 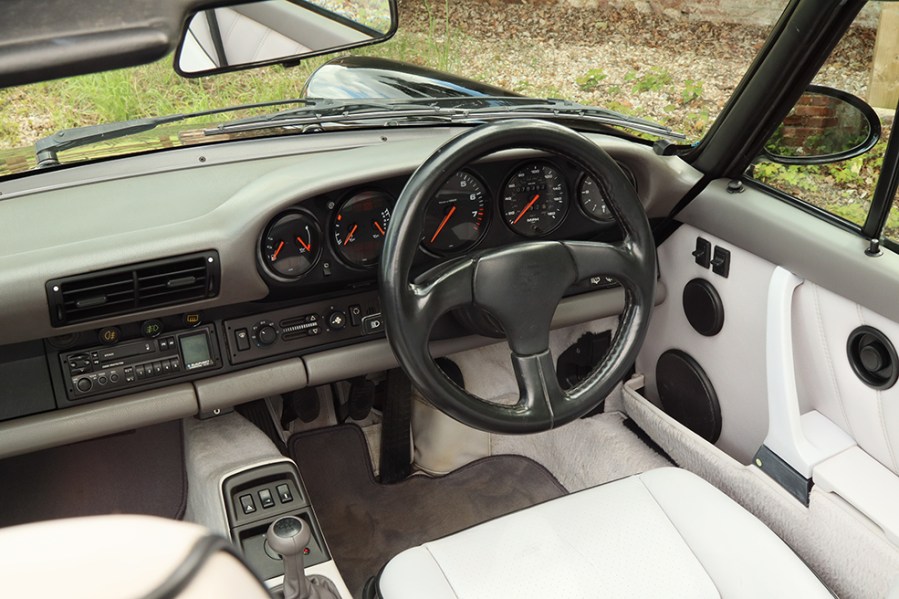 Given the nature of these cars it’s not surprising that most have been looked after and so a really tatty cabin is unusual. If you find a car which needs tidying up though, it could be a useful way to drive a bargain and pretty much everything you might need is available. It needn’t be too costly either: a headliner kit is around £100 and a carpet set around £350, although a full set of OE-spec covers and foams for the front seats is around £1000.

To many Porsche enthusiasts, the 964 is the pinnacle of the classic Porsche 911, combining more user-friendly handling with the air-cooled engine and its improved safety and cabin comfort making it easy to live with. This has combined with its short four-year production life to drive values up in recent times, but it remains an affordable option compared to the older cars.

Beware the many ‘back dated’ cars made to look like the older classic 911. Regardless of how well it’s been done, consider whether the car can be put back to standard specification and remember that as Porsche 911s age, the market increasingly values originality.