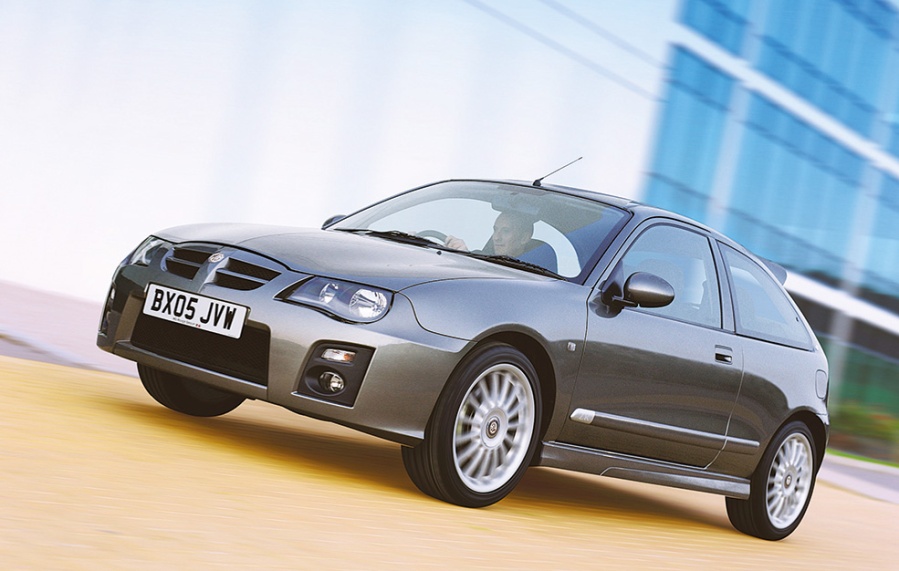 The R3 variant of Rover 200 which arrived in 1995 was essentially a new Rover design, but one which contained considerable carryover from the previous Honda-derived cars. It was facelifted as the Rover 25 in 1999, which in turn spawned the MG ZR in 2001. To effect the metamorphosis from staid Rover into sporty MG, the ZR was given a revised bumper, grille and a tailgate spoiler. The MG also got lower and stiffer springs, harder bushes, uprated dampers and sharper steering. The result was a well-handling car that could be thrown into corners with enthusiasm, providing plenty of feedback to the driver and sticking to the road like a true GTi.

The ZR was facelifted in 2004 with minor external tweaks, most obviously the switch from a four to a two headlight look and more extensive changes to the interior. The facelift version was perhaps not as pretty, but it benefitted from tweaks that made the brakes, throttle and suspension all feel even sharper.

The ZR was available in three and five-door bodies, and in two trim levels: ZR and ZR+. The Plus got extras such as electric front windows, a sunroof and better seats, while the ZR160 also gained aircon, bigger alloys and sculpted sill finishers, the latter two being extra cost options on the lesser models.

Engine-wise, there were three petrol options and two diesels. Entry level was the ZR105 with a 103Ps 1396cc K-series and a five speed R65 manual gearbox that had been developed from a Peugeot design. In mid-2003 that was replaced by the Ford-derived IB5 5-speed gearbox similar to the one found in a Fiesta. The ZR120 got the 1796cc 117Ps version of the K-series engine, now attached to a Honda-designed PG1 5-speed manual or a ZF CVT automatic option, while the ZR160 got VVC on the 1.8 engine and 160Ps with a model-specific closer ratio version of the PG1. The majority sold were ZR105s, and the extra power of the ZR160 over the ZR120 is only really noticeable if you regularly venture into the upper rev range.

The diesel TD option was powered by the 1994cc L-series, putting out either 101Ps (discontinued on the Mk2) or 113Ps according to the programming. Both were turbocharged, but not exactly state of the art engines having been developed with Perkins from the O-series engine back in the 1980s.

All ZRs were blessed with the same basic suspension package, but with different front spring and damper rates to cater for the 100kg K-series petrol engine or the 180kg L-series diesel. Brakes were 260mm discs at the front and drums at the rear for the low powered models, but front discs were vented and 240mm solid rear discs fitted on the ZR120 and the higher power diesel. The ZR160 had even larger 282mm vented front discs with 262mm solid discs at the rear clamped by larger calipers. It also got ABS as standard, while this was an extra cost option lower down the range until later in the production run.

The good news for anybody expecting a lifetime of welding on any MG costing just a few hundred quid is that ZRs are generally pretty robust bodily, and rust is unlikely to be a serious issue. However, weaknesses in the sealing after more than a decade on the road can see corrosion breaking through between the inner arch and outer wing around the rear wheelarches. The front wheelarches can also suffer with tyres throwing up road dirt and debris that breaks the paint and allows corrosion to get going. Frontal stone chips are also common, and can be worse because of slightly brittle paint in some colours.

On any K-series, your primary concern is the fragile head gasket. Look for coffee-coloured fluid on the dipstick or contamination of the coolant. Above all, be sure to take a test run of 20 miles or so, then check for bubbling in the header tank or loss of coolant. The problem can be cured, but it is expensive relative to a car costing £500. It is worth checking the condition of the radiator and any paperwork that comes with the car too – if it has done more than 60,000 miles without replacement, consider budgeting £110-£120 for a new radiator. 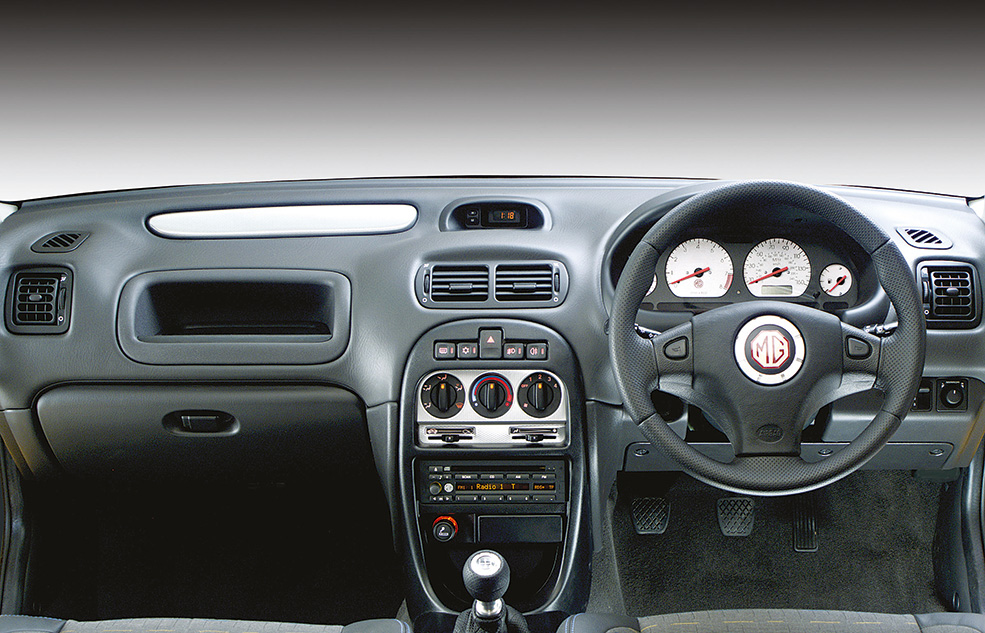 K-series cam belts should be changed at different intervals/mileages dependent on engine: 60,000 miles or four years for the ZR160 VVC K-series, but 90,000 miles or six years on the rest. The L-series diesel has a cambelt that should be changed at 84,000 miles or seven years. You are unlikely to see any change out of £400 to have a new belt, water pump and tensioner fitted, rising to at least £600 if you want the peace of mind of having an uprated head gasket fitted at the same time.

An uneven idle on a non-VVC K-series engine could be caused by leaking inlet manifold gasket O-rings which are cheap and easy to fix, or it could be an issue with one of the many electrical connections in the engine management system having become dirty or loose. Fortunately a faulty ECU (which is expensive) is not a common failure point. It could also be down to one or more faulty sensors, which are cheap enough but only when you have correctly diagnosed which one is at fault.  Of benefit here is that all cars are EU3 compliant, and so have the standard OBD2 engine diagnostic protocols. This means that a cheap code reader will give a window into the workings of the ECU.

The L-series is mainly criticised for its relatively rough and crude character, but is generally very robust and reliable.  If the engine develops a narrower than expected power band, then this can often be due to the air flow meter going out of calibration, something that is usually only cured with a new one (£25-£95 depending on brand). If the engine smokes badly and has poor performance, then it could have had a cheap-and-nasty ‘tuning box’ added, or it could be suffering from nothing more than an overdue fuel filter replacement.

The R65 gearbox has proved to be a quite reliable unit as long as it is not over-stretched – it was only ever fitted alongside K-series engines up to 1600cc to reflect that it was developed and intended for a small car with a smaller, less powerful engine. The PG1 gearbox is generally reliable too, but a whine in fifth or at idle which does not go away when you step on the clutch means a rebuild or a replacement is imminent. If the whine at idle does go away when you depress the pedal, then it is down to input shaft bearings that need replacing. With high stress conditions it is possible to get a whining at steady speeds that is more often noticed in fourth; this can be the diff bearings complaining. These units can also suffer from seized bushes in the clutch release arm and whilst removal, cleaning and greasing the two bushes (especially the upper) will help provide a long term cure, a replacement from the likes of Brown and Gammons that incorporates a grease nipple makes a lot of sense if you are changing yours.

The CVT gearbox doesn’t have the best of reputations for longevity, but it is better than some people would have you believe. In operation it should be smooth and seamless. Expect some noise from the unit’s oil pump, but poor acceleration, excessive noise or jerky operation suggest expensive repairs. Note also that these ZF gearboxes require special oil and normal CVT oil is potentially damaging, which can be the cause of some of the problems found.

On the suspension, these days knocks and rattles over bumps should send you first of all checking for broken coil springs – ZRs are no worse in this regard than any other car, but potholes and tired or cheap replacement springs are not a happy combination. See also if the balljoints need replacing as the wider wheels of the ZR over the original Rover give these a hard time. Ultimately though, the most common area that will need attention is suspension bushes, and – depending on mileage – dampers.

Brakes are all adequate for road use as standard, but upgrading lower-spec cars with parts from higher up the range is a relatively simple bolt-on affair. Pulsing through the pedal when braking gently at low speed on a car fitted with ABS suggests reluctor ring or sensor failure. Reluctor rings appear to be an integral part of the outer CV joint, but they can be removed and aftermarket replacement rings fitted which are significantly cheaper at under £10 each.

Inside the cabin, ZRs were rarely entirely rattle-free from the factory, while time and miles will have done nothing to improve matters. You can spend a lot of time trying to track down and rectify creaks and groans, but success is not guaranteed. Wear to the outer side bolsters of the front seats is also common, but depending on where exactly it has gone, a trimmer should be able to effect a decent repair.

More important is to check that all the electrical fittings are working correctly. Consider fully functioning air conditioning (if fitted) a bonus. Electric windows that don’t work smoothly (or not at all) are not uncommon, and a regulator will cost you from £50 secondhand. Check too that the alarm works properly as the factory system can develop faults. Ideally you want to get two keys that both work on the buttons.

ZRs from mid-2003 (with the round fob that has the MG badge in the middle) changed to the Pektron SCU (security control unit) system that combines all electrical functions bar the engine management into a single ECU and also enhanced security. Unfortunately these SCUs can be a little fragile and see internal faults that stop some electrical functions from working, such as the driver’s electric window, intermittent wipers, horns and so on. These are often on-board relay failures, and these can be replaced by specialists at a much-reduced cost compared with the official repair of a new SCU, which demands new fobs too (see p116 for more).

There is in addition a specific MG ZR weakness in that the SCU is located on the bulkhead behind the heater air intake, and it has the four wiring multiplugs running straight down to the unit. In cars that develop a water leak past the screen (usually following screen replacement), water can track down the wiring and straight into the SCU, quickly causing terminal damage. Any water leak therefore needs urgent sorting, and ideally you should reposition the SCU so the wiring has a bend to prevent water tracking in through the plugs. 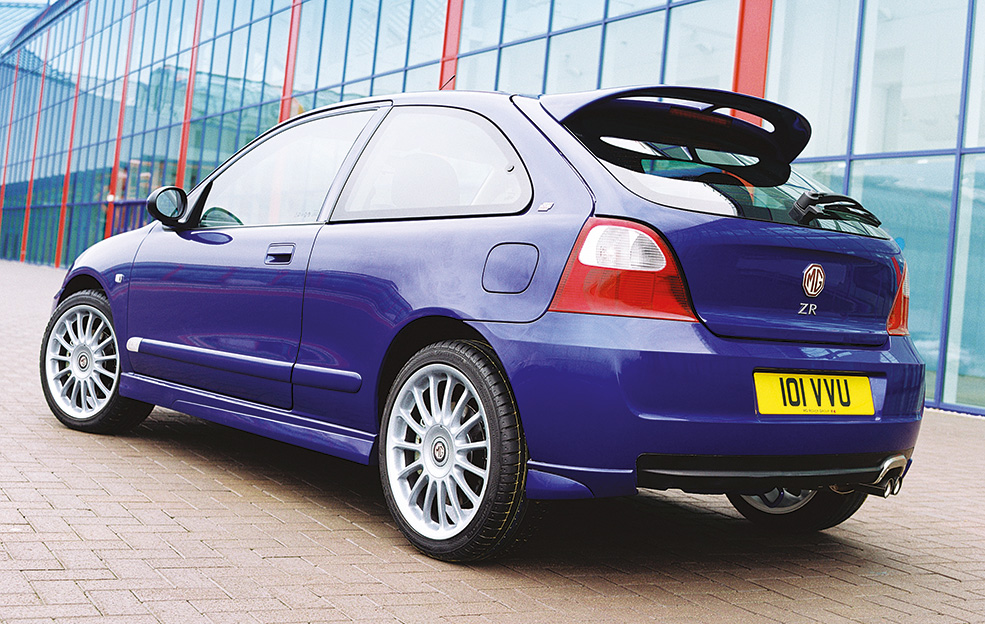 WHAT TO PAY
You can find good ZR105s on the road for as little as £500, but you will probably have to expand the budget to £1000 to bring some of the more powerful models into your orbit. If you want something seriously low miles or perhaps one of the rare Monogram colours, then you could be looking as high as £2500. Just about the only other options of a road-ready MG for £500 is a slightly tatty ZT, or – if you look hard enough and/or get lucky – an even more tatty but still fun MGF.