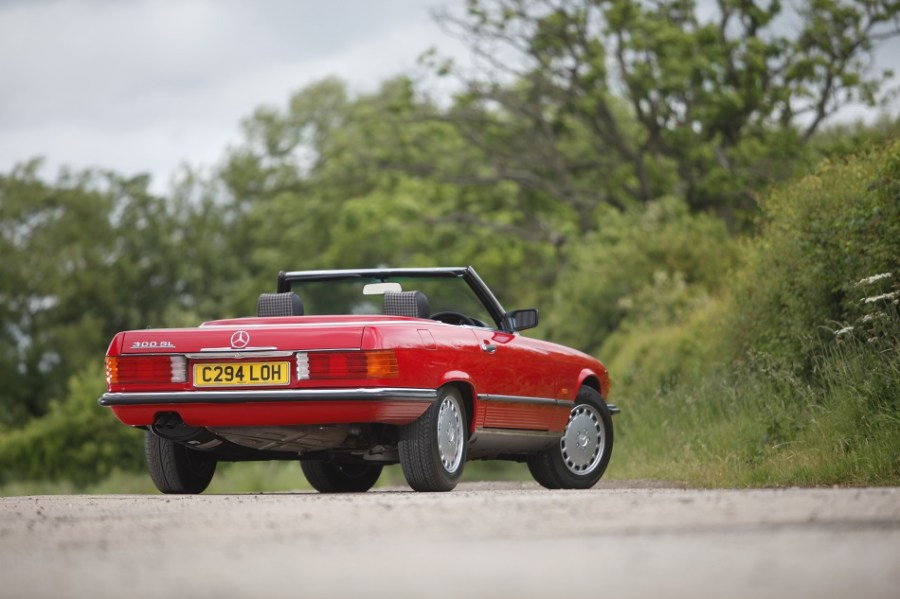 The Mercedes-Benz R107 SL; timeless, beautiful and gathering popularity would be an apt way of describing it. Weighty would be another, but part of that comes of as a result of its bomb-proof six and eight-cylinder powerplants, thick steel construction and second-to-none build-quality. Here’s our definite buyer’s guide for prospective owners.

As such, while this Mercedes-Benz is no Lotus Elan or Mazda MX-5 when it comes to being lithe and nimble, the SL has been known to easily outlast many of its contemporaries – treated properly we’ve no doubt that these machines have the potential to go on forever.

Although it is a sports car, you wouldn’t describe the SL as an out-and-out performance motor. While it has adequate pace, boasting a 0-60 mph time comfortably under the 10-second bracket, the refinement and looks were of more importance. This focus on design has paid dividends today as you can park a Merc SL of this era anywhere and it’ll fit in.

The market for SLs has changed significantly over the past few years. As the previous ‘Pagoda’ SLs started to sell for big money, more and more attention was paid to the then more accessible R107, ultimately driving the price up for exceptional quality vehicles. This also resulted in a number of cars entering the market, which helped to stabilise the prices somewhat.

For sheer class and beauty, we can’t think of many cars that could top the R107 for looks this summer. Here’s what you need to know before buying one. 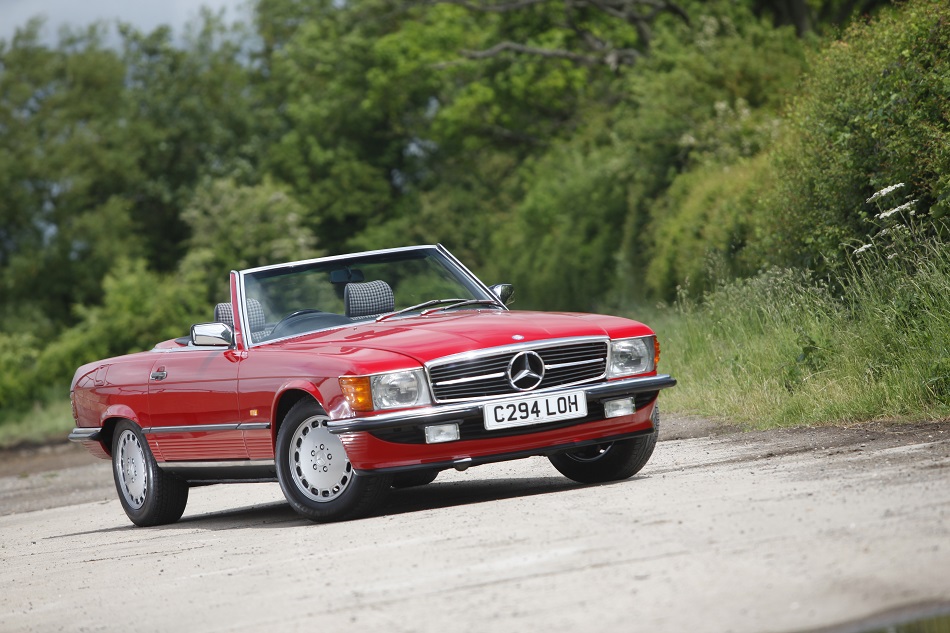 BODYWORK
It’s a 1970s/1980s car, so with this in mind you’d expect to find some rot on various panels around the car. However, it’s pleasing to know that while you should expect rot, the SL is rather resilient compared to most other machinery of this era.

That being said, rust can be a problem for pre-1976 SLs as they were not well rustproofed before they left the factory. Check with the current owner whether the vehicle has suffered from rust and what has been done subsequently. It’s good to note that after 1980 Mercedes used wax cavity injection to counter rust and post-1986 bodyshells were galvanised.

Suspect areas for rust sit in the front and rear valances, so don’t be swayed by the bulky bumpers, make sure you inspect carefully. Bumpers are made up of a combination of chrome pieces and hidden support girders. Water tends to collect underneath the bumpers, causing them to rot from the inside out. In terms of bubbling paint, the wheelarches, the door bottoms and the windscreen surround should be clear.

We spoke to a specialist who suggests that the rear bumper corners are the worst affected; replacing the part seems to be the only sensible solution. It’s not a difficult process as the valance panels are simply bolted on so shouldn’t cost an arm and a leg.

One positive thing to note when restoring SLs of this era is that Mercedes was one of the first manufacturers to properly support heritage vehicles in terms of parts. As a result, specialists suggest there is just about nothing you can’t obtain between genuine OEM parts and aftermarket. 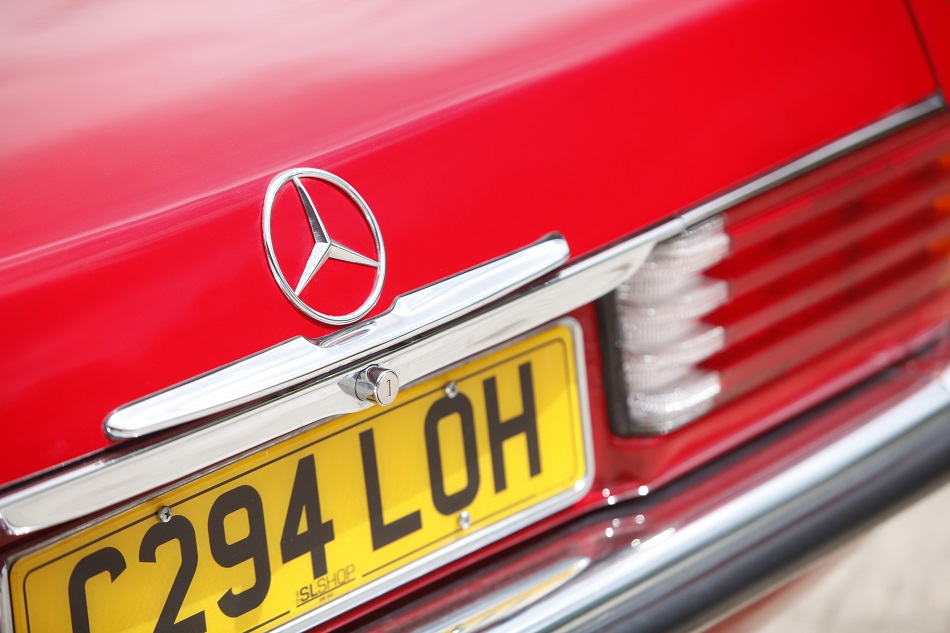 These however are cosmetic issues, which an owner can live with. The same cannot be said of corroded sills or jacking points as any weak metal here will compromise the car’s structure. The subframe on the 1970s SL models also has a reputation for rotting rather badly – it’s not the end of the world as replacements are available, but you’ll need a specialist garage to do the necessary work.

You’ll also need to check the scuttle area under the air intakes at the base of the windscreen. Clogs will lead to bulkhead corrosion, which is not good news as you’ll need to budget at least £1000 for repairs and that’s assuming that the rest of the hidden metalwork surrounding this area is also sound!

The easiest way to find out whether this is a problem for the car you are inspecting or not is to unscrew the heater blower’s plastic cover on the bulkhead which will allow you to have a good look inside to gauge the condition of the bulkhead.

But even if the bulkhead looks good and the carpets in the footwell are dry it’s still worth inspecting the condition of the floors anyway – both from inside the car and underneath. The same goes for the box sections at the bottom of the engine bay. Water can also get into the boot through perished boot rubbers or failed tail lamp seals.

Finally the roof: assuming you can find a secondhand hardtop you’ll need to have it repainted to match the rest of your SL’s bodywork. Suffice to say, matters are a lot simpler if you buy your car complete with its hardtop. 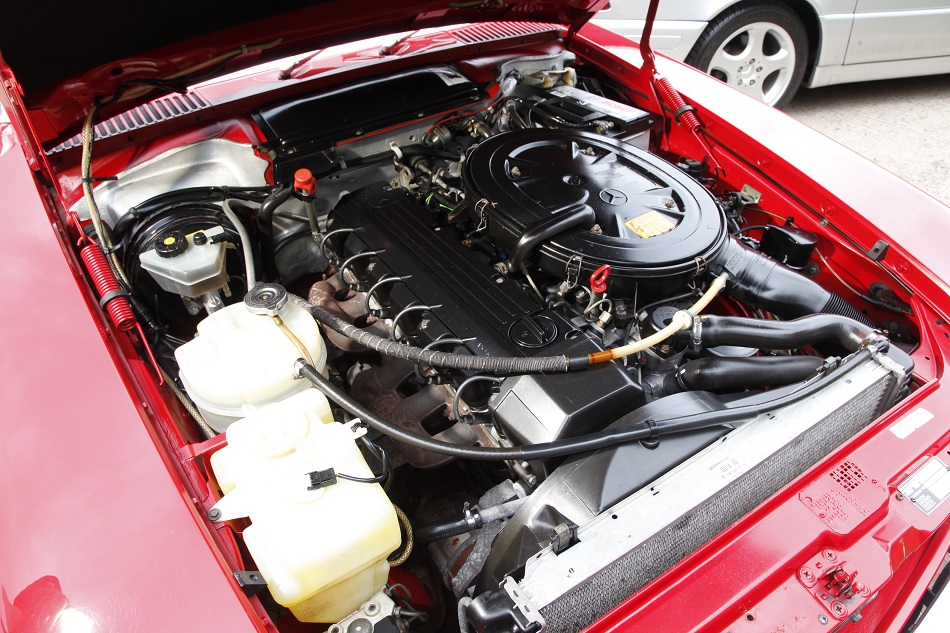 ENGINE AND TRANSMISSION
It’s good to know that over the SL’s 18-year production life, no single engine stands out as being troublesome, whether that’s in straight six or V8 guise. They all, in fact, have a reputation for robustness.

On inspection, keep an eye out for blue smoke emitting from the exhaust tailpipes on startup. Ensure that the owner doesn’t pre-warm the car before your arrival as cold start-ups always paint a clearer picture. Blue smoke usually points to worn valves; these usually need to be changed every 70,000 miles, which is the same interval for changing the cam chain and tensioner.

If you need to have the stem seals replaced, then it’s worth letting a specialist check the condition of the hydraulic tappets at the same time especially if the engine seems to be making any ticking/tapping noises from the head.

Ageing radiators are the most common reason for engine overheating, assuming the coolant level has been maintained.

Most SLs from this era came with automatic transmission – it was only the 280 and 350 models that could be specified with a manual gearbox. As you’d expect, the slush box fitted to these cars is just as long-lived as the rest of the machine. Bigger engines generate more torque, so a full gearbox rebuild will come sooner on a 500SL than, say, a 380SL, but when looked after they should still be going strong 150,000 reliable miles later.

Similarly, back axles are tough but will grow noisier with age and wear. Expect to pay around £1500 for the back axle to be rebuilt, while a fresh set of propshaft couplings will cost around £350. 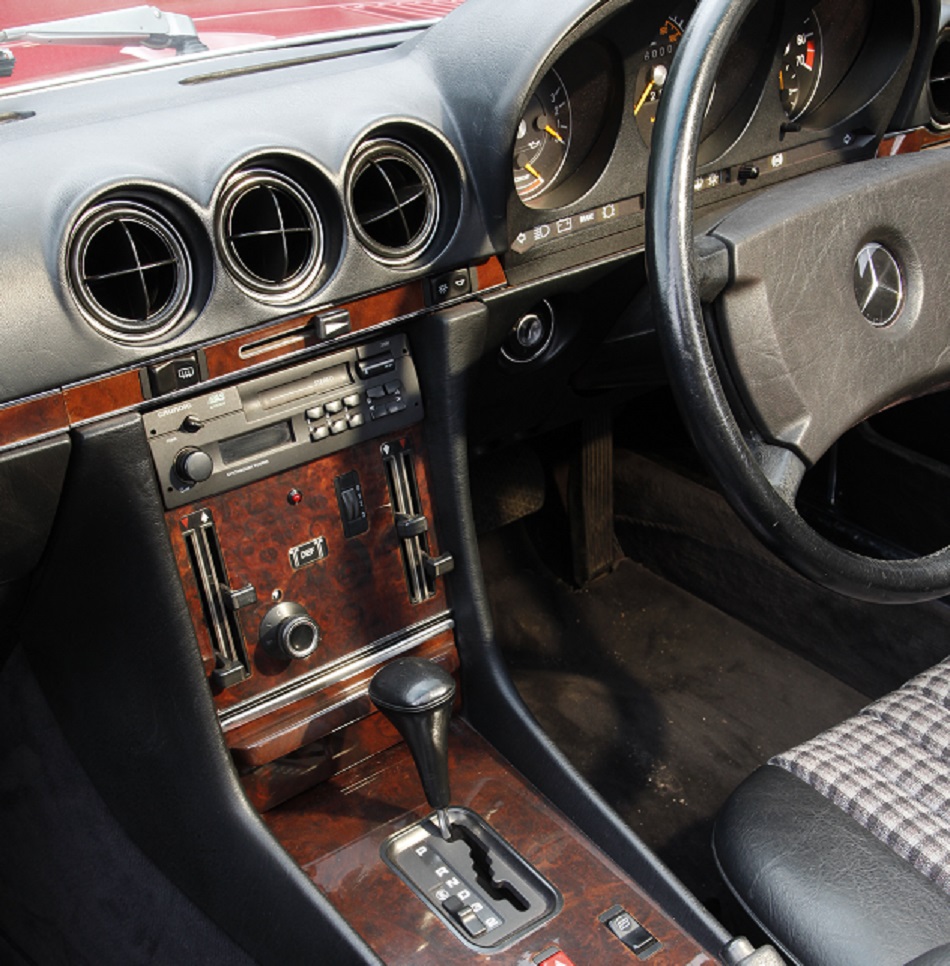 RUNNING GEAR
There’s very little to worry about suspension-wise. Most components are shared with various Mercedes saloons from this era so replacement parts are easy to come by. If the car seems to roll unduly in the corners or handling just doesn’t feel as tight as you’d expect, suspect worn shock absorbers – these are usually neglected. Clonks and rattles are usually a result of worn anti-roll bar links which are an inexpensive fix. If the subframe mountings have failed where they fix to the car itself then you could have a potentially very costly problem on your hands.

All SL models came with power steering as standard. The steering boxes on these cars don’t last forever and after 90,000 miles will need adjusting at the very least.

SLs are also fitted with all-round discs plus a brake servo as standard. This is a reliable set-up that shouldn’t be much cause for concern, but as ever be on the look-out for problems like seized calipers especially on little-used cars.

Anti-lock brakes were optional from 1980. Where fitted, look for a warning light on the instrument panel when you start the car. This should go out again shortly afterwards. If not, you’ll need to check for faulty connections and may need to replace one of the ABS sensors at about £85 each. 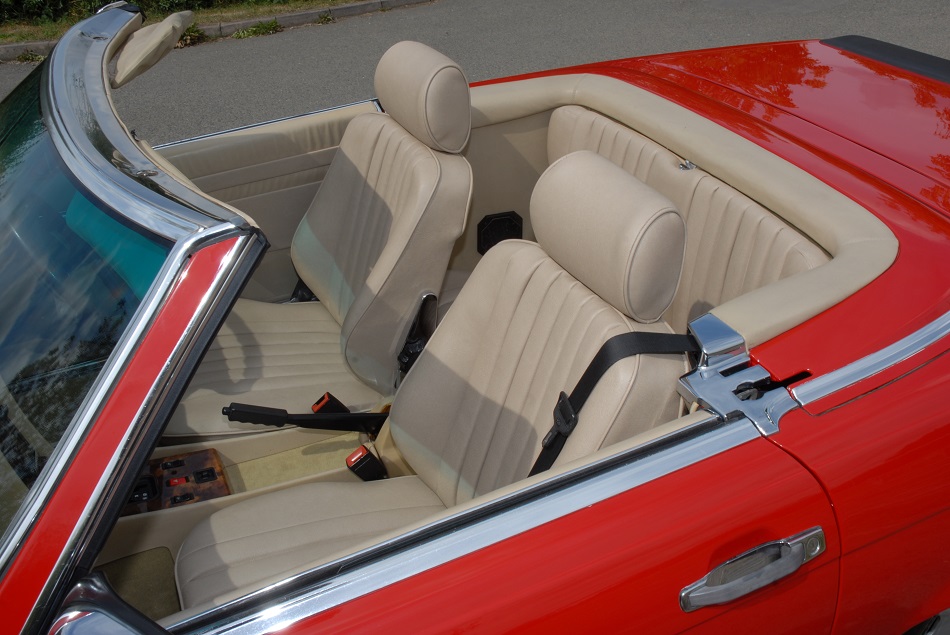 ELECTRICS AND TRIM
You should begin here by inspecting the condition of the soft-top hood. Check that there aren’t any abrasions or tears and that it fits well, but by the same token hasn’t shrunk. Note that the cables and mechanisms that secure both the soft top and hardtop in place can also break/seize. Specialists charge around £795 for a replacement hood, which includes the price of fitting.

Try all the electrics as well – windows, the wash-wipe unit and things like air conditioning where fitted. You’ll also need to make sure the instrument stalks are functioning properly as they have a reputation for being temperamental. If the heat element for the heated seats, which were introduced to the options list in the early Eighties, isn’t working then replacing it could require a professional trimmer.

MB-Tex was Mercedes-Benz’s alternative to leather; similar to leather but much longer lasting. SLs do come with cloth interiors and vinyl, too, but it’s the plastic trim on the oldest cars which tends to suffer.

The central locking on these SL models is vacuum-operated, so there’s the potential that this system may have sprung a leak. The tank is fitted under the offside front wing and is known to rot and in extreme cases fall off completely. 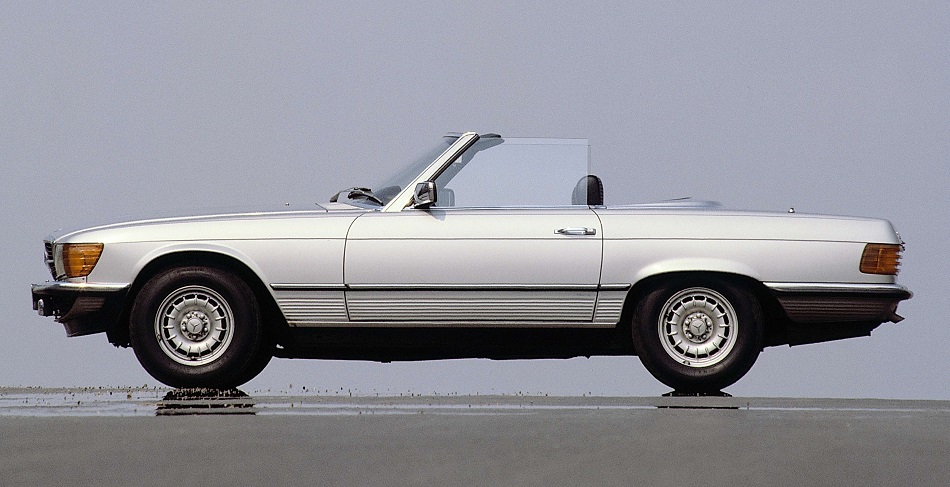 WHEELS AND TYRES
You should be suspicious of cars that are fitted with non-standard wheels and tyres as these cars’ on-road dynamics are very easy to upset. Steel wheels should be fitted with 195/70/14 tyres while for the alloy wheels it should be either 195/70/14 again or a 205/70/14 or 205/65/14 profile.

UPGRADES
Specialists offer everything from three-point seat belts for the rear seats to wind deflectors for the facelift (post-1986) models – these are a must for your SL.

VALUES
Projects are best avoided unless you really know what you’re doing or there are only a few jobs that need to be taken care of in order to make the car roadworthy. With this in mind, you should look to spend £9000 to £12,000 on one of the 1970s 350 or 450 models. The 1980s SLs (which are slightly more fancied) usually cost a bit more so expect to pay between £17,000 and £22,000. In each case you can expect our recommended budgets to net a car that’s in good condition.

As always, expect to pay one or two grand more if you’d prefer to buy through a dealer (which can prep and service the vehicle before sale) and bear in mind that low mileage/concours condition cars have been known to top £70,000. 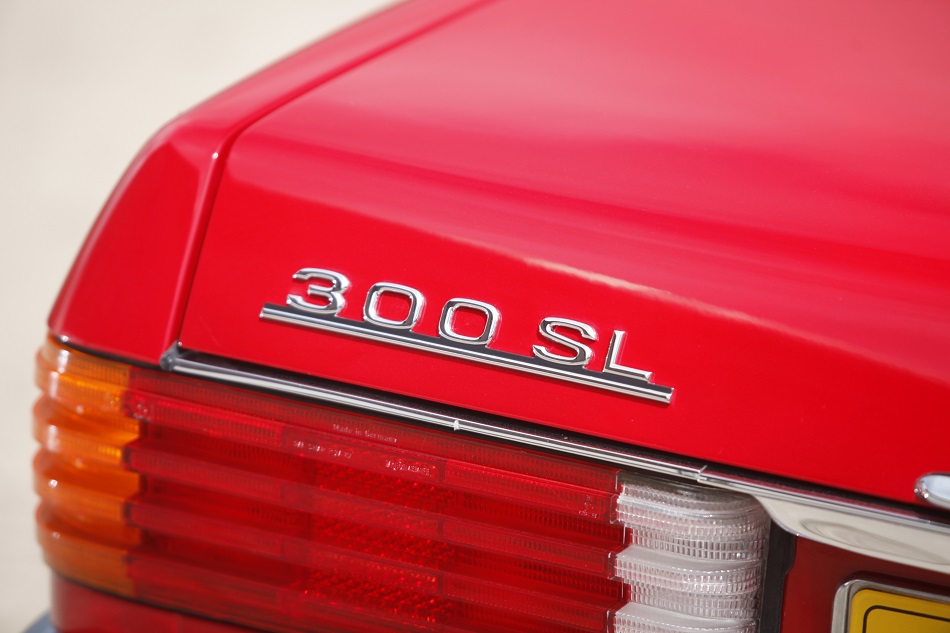