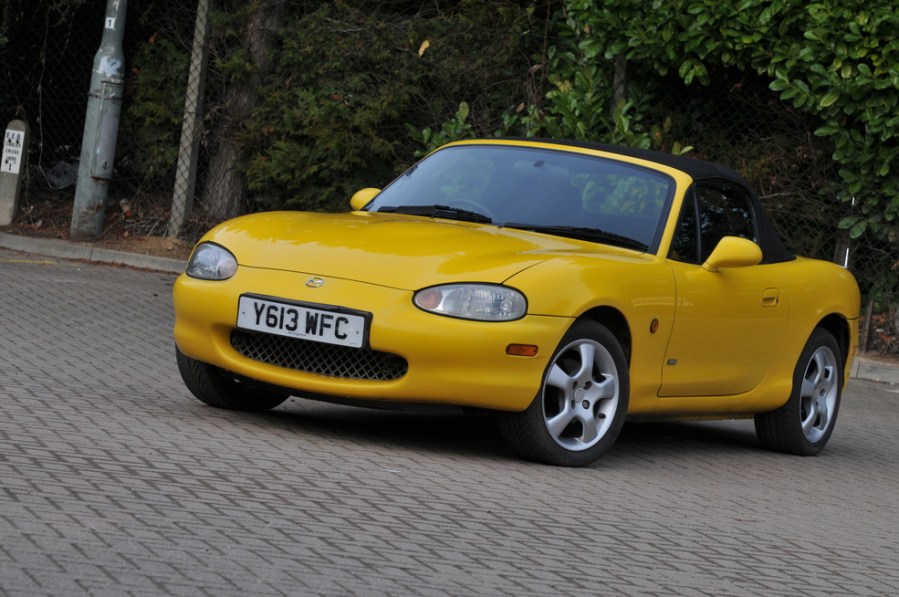 Similar to the Mk1 but with some subtle changes, the Mazda MX-5 Mk2 represents a brilliant buy for those looking for budget drop-top thrills. Here’s how to buy one

The MX-5 has become synonymous with modern-classic open top thrills, much like the MG Midget was during its day. It seems that if you want a roadster that’s fun, reasonably practical and still easy to work on, the Mazda MX-5 Mk2 is the choice for you.

If you thought the Mk1 was renowned for rust then you best be prepared for a whole lot worse to come with the Mk2, unfortunately. That being said, it’s common to find cars that have been treated to good underseal and rust prevention even going as far as having rust issues dealt with thanks to some welding here and there. Make sure you do your homework though and check as to whether any work has been done and also who carried the work out.

It still remains top dog when it comes to cheap thrills, despite the likes of the Toyota MR2 Mk3 snipping it in terms of value, but not necessarily excitement levels. Its low driving position and back-to-basics characteristics have helped it become the crowd favourite and ultimately have allowed it to gain acceptance within the classic car community, while others of the same era may be frowned upon. Given that the Porsche Boxster and Mazda MX-5 Mk2 are around the same age, you’ll find that enthusiasts are much more open to the idea of an MX-5 than that of a Boxster. Strange how that works. 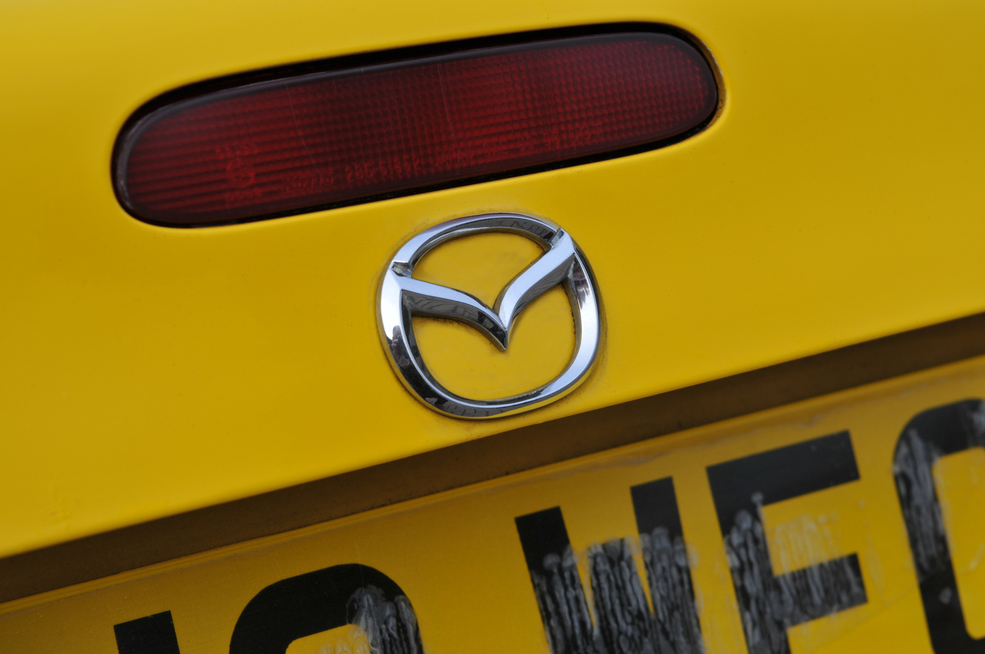 Put the Mk1 MX-5 alongside the Mk2 and you’ll only notice a couple of differences; the most obvious being the pop-up headlights; or lack thereof. According to Mazda, the move to fixed headlights was for weight-saving and aerodynamic reasons, which was a big deal given the whole car was unfit for the 1999 crash testing regulations. Mazda claim that 60% of the Mazda MX-5 Mk2’s body is completely new, with 40% added rigidity for extra safety. Underneath you’ll find a revised front and rear crumple zones and stronger sills and door beams to resist side impact.

Prices for Mazda Mx-5 Mk2s are fairly stable at the moment, which make it a great buy, even over the earlier model. Here’s what to look out for when buying one…

The biggest point of concern is rust. In most cases, if rust is present you can see it quite obviously around the sills and wheel arches. In some cases this may have been sprayed over, rather than repaired, so check for overspray and bubbling on the paint; you can also gently press at the lower end of the panels to see if the body crumbles or falls away.

While you’re checking for rust, it’s also a smart move to check behind the front bumper (by lying down and looking up when underneath the car with a torch) and inspecting for crash damage. The front crash bar is an obvious place to start, so check for any damage to this and its surrounding areas. Check to see how well the front bumper marries up to other panels. Plenty will have been crashed and repaired, so make sure the correct work has been carried out if necessary. 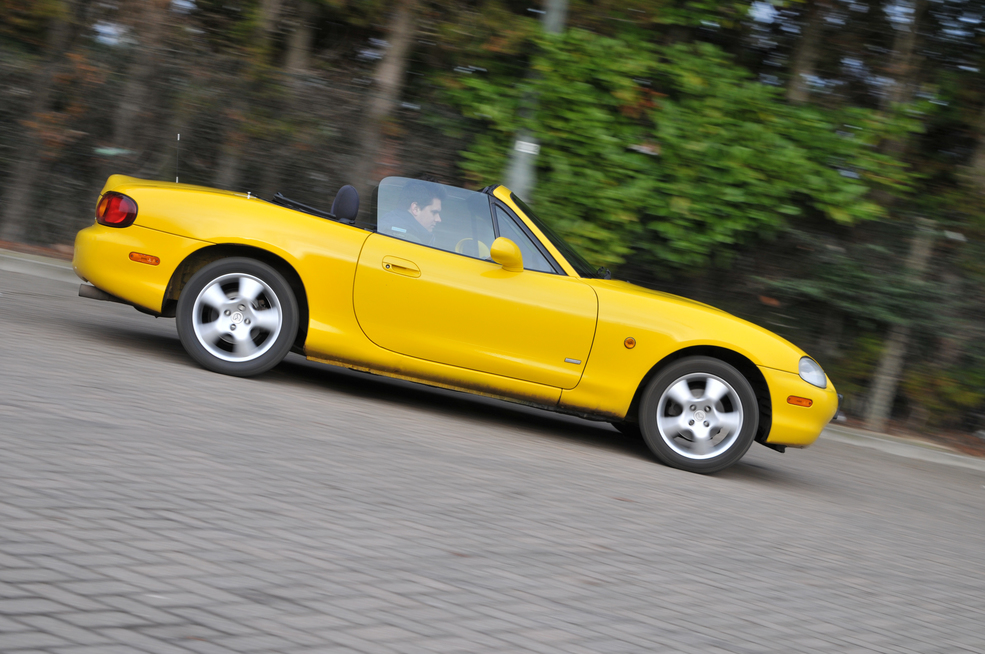 As it’s a rear-wheel drive car and usually owned by enthusiasts with exuberant driving styles, check the mechanicals at the rear, most notably the camber/toe of the rear wheels and the wishbones they’re connected to for damage. Sliding into a kerb isn’t unheard of and can do a surprising amount of damage. They can be relatively quick fixes with wishbones available to buy for relatively little money and a good number of spare wheels for sale on the market, but the subframe may also be damaged, so be wary.

It’s also worth lifting the boot carpets up and having a look at the spare wheel compartment for rust. If the boot has uneven or large panel gaps water can easily gain access to the boot and sit without chance to dry; causing more rust. Continuing at the rear, check the rear subframe and wishbones, both are prone to surface rust.

The interior is one of the must rugged aspects of the Mazda MX-5 Mk2 so you shouldn’t have too much trouble here. You can expect the usual suspects though given the seats are leather in the majority of cars. So, check for seat cracking, tears in the leather and armrests not being supportive. Cloth trimmed examples are fairly hard wearing as a rule, though holes may present the perfect opportunity for a leather upgrade. All the electrics should work as usual and there aren’t any known electrical problems inside. 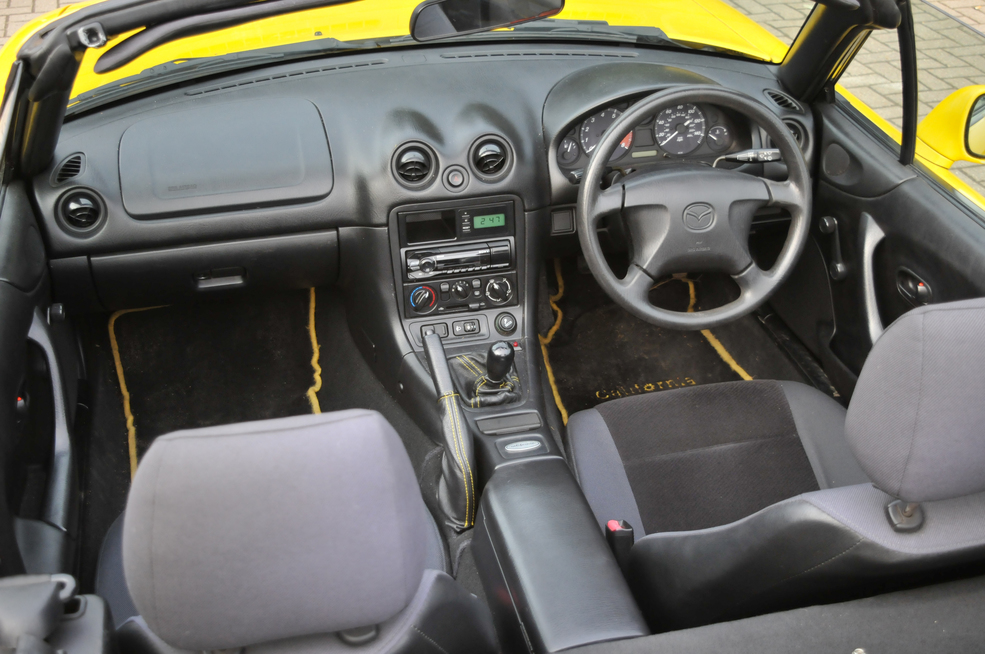 The roof is manually operated and the catches holding this in place are located either side of the car at the front by the sun visors, it’s a simple clip and should undo/do up with ease. If the clips don’t fasten properly, the roof can be susceptible to allowing water to enter the cabin, which will then cause further problems, so make sure these are in suitable working condition. Make sure you check the condition of the roof, too, as tears can be easy to come by and replacement fabric roofs can set you back a fair few hundred pounds. It should be easy to operate without needing to use too much force. The rear window may need help when folding the roof down, though, so be careful not to force it down and break it.

Both 1.6-litre and 1.8-litre engines are known to be good units, but as with anything, both require maintenance. While non-interference, cambelts should have been changed at 60,000 miles, and you’d hope that the water pump was done at the same time. It’s best to check with the owner as to what maintenance has been done and whether regular oil changes were also done. Some cars can sit for a long period of time without being run, so bear in mind that while the mileage may seem low, it could be in worse condition than higher-mileage cars due to the lack of running.

It’s good to know that both engines thrive on revs, so expect them to have been rung out to the redline throughout its life time. This isn’t a bad thing, they are capable of withstanding a high level of abuse. Also remember that MX-5s present themselves as a cheap track day car, which means it will have hovered around its redline for long periods of time. This isn’t a worry if the servicing is carried out more than once a year, but it pays to know the history, as with any car. 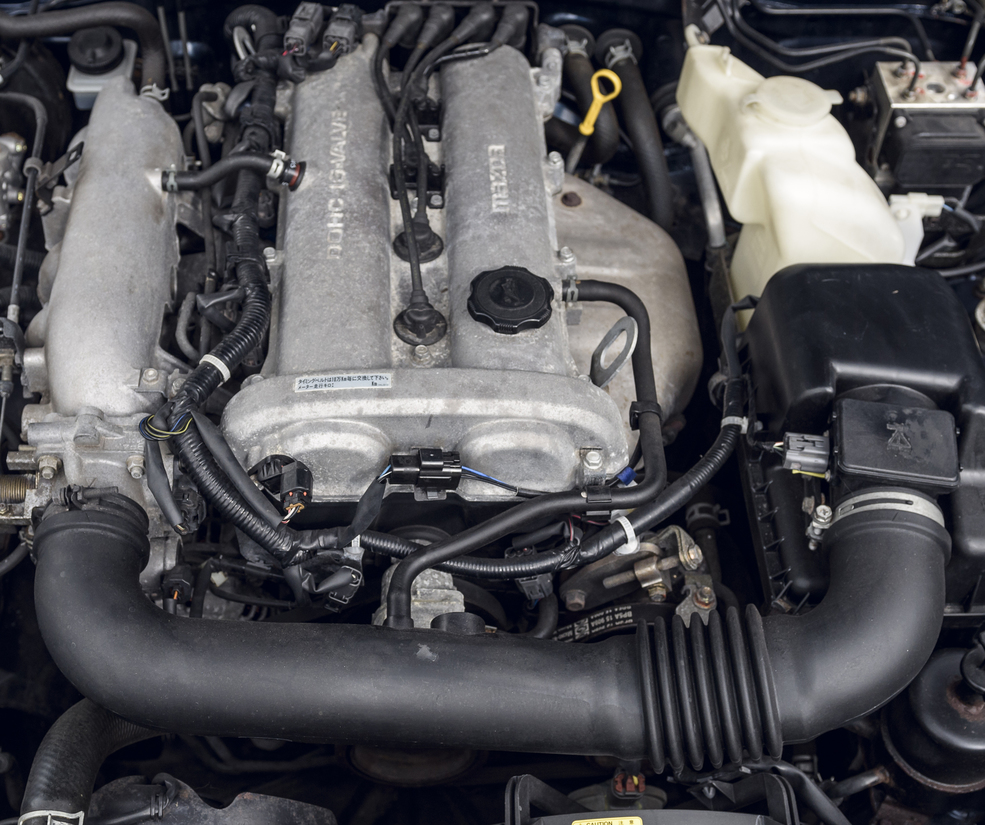 The 1.8-litre is the car to go for, with 140bhp on offer in 1.8 Sport trim. The 1.6 is a good alternative and while doesn’t offer the same performance, it does offer similar levels of excitement. Both cars should feel spritely given their low weight of around 1000kg. Anything other than good acceleration should be seen a sign to walk away.

It’s worth looking around the cam cover for any oil leaks, as well as underneath the car once it’s moved. The engine should idle smoothly; any hint of misfiring points towards the two coil packs. HT leads are known to be problematic, so check to see whether they’ve been replaced, and if so, how many times.

The biggest issue with the transmission is misalignment. Many garages don’t realise that when replacing the clutch, the gearbox needs to be realigned to avoid problems. A rattling sound on overrun would point towards this problem and can be costly to fix owing to labour costs. 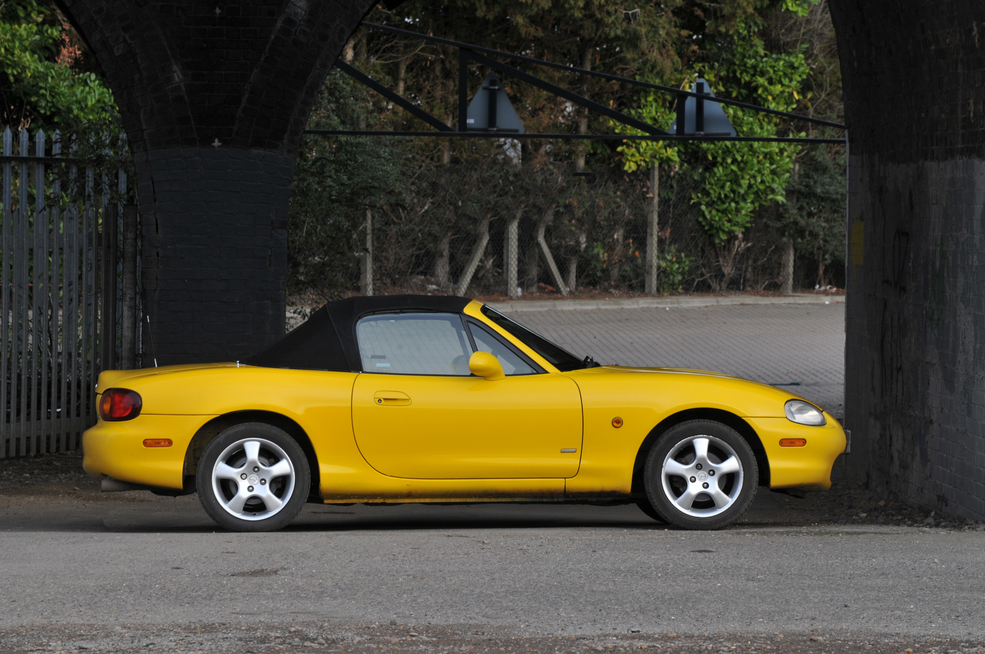 Earlier cars received the five-speed transmission which is agreed to be a better option, later cars were fitted with a six-speed, which is better for fuel economy but slower between changes. A failing propshaft can be identified through a squeak, particularly in reverse.

The 1.8-litre Sport variant received a Torsen Limited Slip Differential, so check to make sure that the oil has been replaced to ensure its longevity.

There is an auto option, and while you may initially scoff at the thought of owning an auto MX-5, it’s surprisingly good, particularly around town. If it’s to become your new daily driver and you encounter traffic each day, it’s well worth considering one. There aren’t any common issues with the box, but fluid should be changed regularly for longevity. There is a dipstick for the auto box, so make sure you check this alongside the engine oil dipstick. 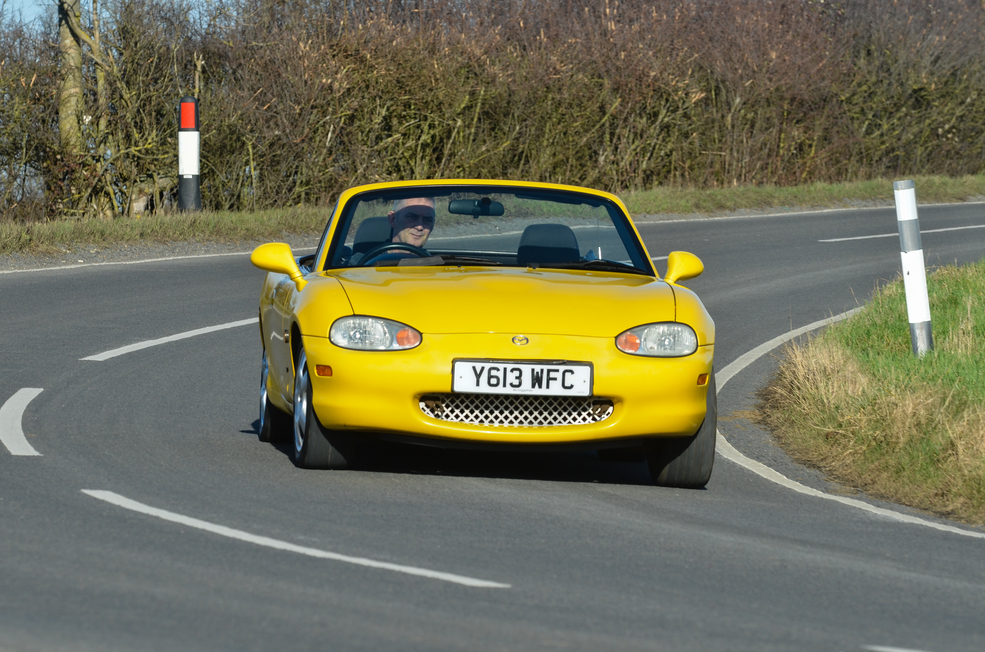 We at Classics World bought and ran a Mk2 1.6-litre California special edition for very little money a few years back. It drove remarkably well and the 1.6 was punchy enough to enjoy. Surface rust was an issue, but there were no other complaints – and that should be your general experience with an old MX-5 too.

You can quite easily spend huge sums in search of the perfect example, but try not to get carried away. The MX-5 was intended for cheap, open-top thrills: don’t let that escape your mind when you’re on the lookout for one.

Do also bear in mind that there are a huge number of special editions that can be a minefield to try and understand. All special editions are simply subtle styling and specification changes with a name to go with it.

It’s worth noting that special editions are limited in numbers and therefore, model-specific parts are difficult to get hold of. They may also come at a premium over other variants, so if the price looks a little high, dig deeper to find out why.