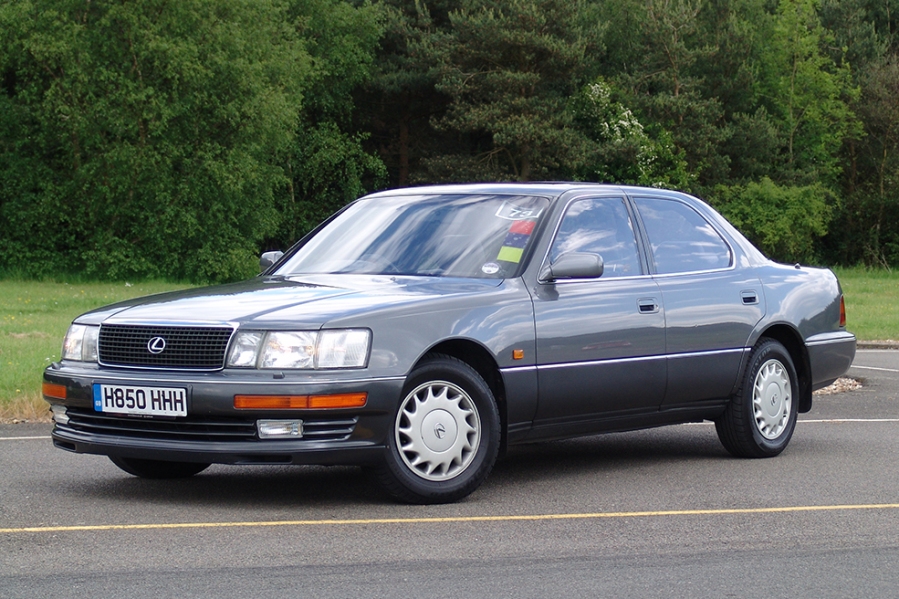 The original Lexus LS400 gave Jaguar sleepless nights and even had BMW and Mercedes on the run. Here’s how to buy a great example

Some cars make it to the status of modern classic rather faster than others and the reason is often that the cars are robust enough to still be in daily use. Sadly there aren’t many Jaguars which fit the bill, but plenty of early 90s Mercedes and BMWs fall into this category and rarely raise a glance as they pass in the street. Even more anonymous but far more significant to the evolution of our current streetscape though is the Lexus LS400, the first of a new wave of crushingly competent cars from Toyota with a steely focus on taking a share of the lucrative prestige market.

The name itself tells you all you need to know: according to Toyota insiders it’s a contraction of ‘Luxury EXecutive for the USA” and reveals that the real impetus behind the project was the enormous potential of the North American market.

The Lexus project began as early as 1983 according to official Lexus archives, when Toyota chairman Eiji Toyoda set the challenge for the company to create a luxury car to rival the best the world had to offer. Just two years later the first prototypes of what was codenamed ‘Project F1’ were running, the whole project guarded with the utmost secrecy.

Interestingly for a nation which turns over new models so frequently, the car was developed around the principle that a car of this type should deliver long-term ownership pleasure and the target was apparently that a Lexus with 50,000 miles showing would not feel any different to drive from a brand new example.

The attention to detail in this process involved analysing the fading characteristics of paint, plastics, rubbers and fabrics as well as the wear, noise and vibration of mechanical components and the prevention of squeaks and rattles.

A special factory was even constructed to build the car and the first Lexus model was revealed to the public at the 1988 Detroit Motor Show. Dubbed LS400 to signify Luxury Sedan with 4-litre engine, the car was as firmly traditional as the US market expected: a ‘full-size’ three-box saloon, front-engined and rear-wheel drive.

The ‘1UZ-FE’ V8 was a world away from anything the US makers could offer, though: an all-aluminium unit with iron liners, it featured four cams and 32 valves, with lightweight aluminium cam followers to reduce inertia in the valvetrain. Machining tolerances were reduced by 50% in the pursuit of refinement and reliability, while hydro-pneumatic engine mounts isolated the cabin from engine noise and vibration. All this allowed the famous advert showing a pyramid of champagne glasses balanced on a running engine.

Driving through a specially-designed electronically-controlled four-speed transmission, the power was deployed via fully independent suspension all round, featuring double wishbones and twin-tube dampers with a newly-developed high-mounted upper arm. Fluid-filled bushes located the control arms, with the wishbones mounted via ‘pillow’ bushes.

Refinement was further improved by connecting engine and transmission ECUs to momentarily retard the ignition timing during changes, the split-second reduction in torque softening the shift, while hydraulic control also reduced the load on the internal clutches depending on load. Today of course this is commonplace but back in the late ’80s it was clever stuff. 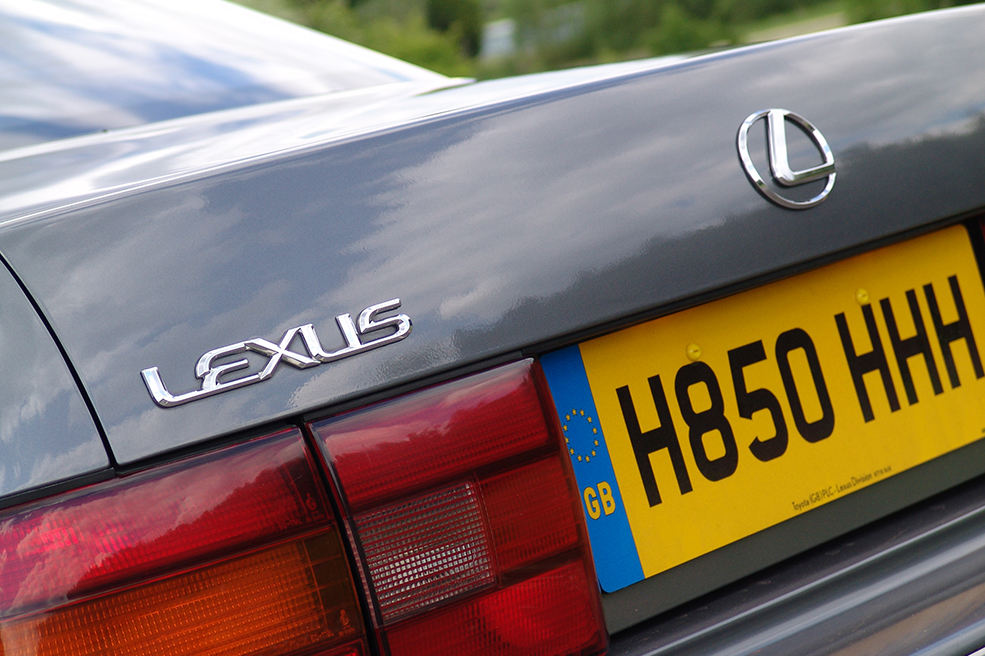 At the rear end, a bespoke differential was developed using 30% more teeth than conventional, then manufactured using tolerances one third closer than previously. It goes without saying that the axle whine of an old Jag isn’t something you experience in an LS400.

Deliveries to American customer began in September 1989, who had snapped up 4200 cars by the time the brand was introduced to Europe the following year. Progress was slower here, with only 1158 cars sold in the first year but competing car makers cottoned on far faster than the buying public just how much Toyota had achieved.

Publicly, they laughed it off as a floaty big Toyota for the American market but in private there were crisis meetings in Stuttgart and Munich, whereas in Coventry there was outright panic. Clearly, the Lexus brand wasn’t going away and if the LS400 was its first attempt then the second try wasn’t going to be laughed off. Sure enough, the GS300 was added to the range in 1993 and in 1999 the smaller IS200 tackled the 3-Series market. Lexus may still be outranked in volume terms by BMW but it’s become a byword for quality and the brand is now firmly established as one of the premium marques in the American market.

In the UK, Lexus took more time to get going but the LS400 appealed to buyers wanting a luxury car which was less showy than a 7-Series or S-Class and word quickly spread about the reliability of the cars as well as the exemplary dealer service.

Clearly, after the 450 prototypes had clocked up 4.4 million kilometres of testing, there wasn’t much wrong with the LS400 as it came to market, but a facelift in 1992 addressed the few criticisms road testers had been able to muster up: larger wheels with bigger brakes and changes to the power steering and suspension geometry to improve perceived handling precision, plus a passenger airbag. Outside the changes included revised body side cladding and a restyled grille.

Production of the original ‘XF10’ generation ended in September 1994 when the car was replaced by the heavily revised second-generation LS400 which Lexus reckoned was nearly all new.

Inevitably, sales of this and later models continued to climb as the Lexus brand became established alongside the old money automotive badges, making the original LS400 a really significant car.

Lexus was famed for the accuracy of its panel gaps which have become a byword for precision, so any variance around the car points to previous repairs. Except, that is between the bonnet and wings: the gap is actually greater at the trailing edge than at the front, an optical illusion to ensure a constant gap when perceived by a person standing directly in front of the car.

The bodywork is generally resistant to rust and it’s rare to find a rotten LS400, but check panel edges and wheelarches anyway as it’s not unknown. One thing which can make these cars look tatty is peeling lacquer on the alloy wheels which was a common issue but can be easily remedied. 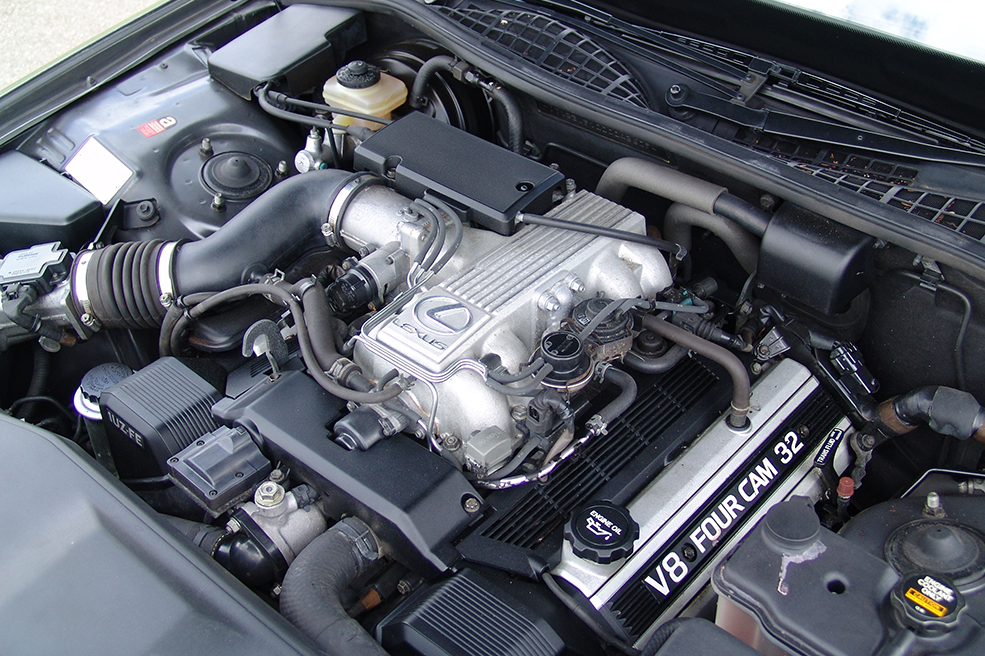 The reliability of the ‘1UZ-FE’ motor is legendary and as a result, common problems are few. One of them is the positioning of the power steering pump right above the alternator, meaning that if the pump develops a leak – which isn’t unknown – then you’re replacing both the PAS pump and the alternator. It’s a relatively straightforward job, but a lengthy one since access is very tight and it’s located deep in the engine’s vee. Since starter motor failure isn’t unknown, some owners replace this at the same time as it’s under the alternator. Owners also report that it’s a good precautionary measure to replace the steel exhaust gas recirculation (EGR) pipe at the rear of the engine while you’ve got everything dismantled, since these can crack.

Elsewhere, the timing belts need changing every 60,000 miles and the water pump should be done at the same time. We’ve met owners who have done it at home but it’s a complex job and not one to try as your first attempt at doing a cam belt.

The original exhaust system was partly stainless steel, but used mild steel flanges welded to the stainless pipework and these of course can rust. Yes, you can get a genuine Lexus part but at hefty cost, so a popular option is to have a custom stainless system made up.

The official service schedule requires the transmission fluid and filter to be changed every year, but the lower mileage of the cars today means this won’t be necessary, so just look for evidence of a caring owner who has had the job done regularly. As with any automatic, changes should be smooth, the fluid clean and there should be no ‘flaring’ on upshifts.

Clonking is bad news on one of these, as the complex bushes are costly to buy from Lexus and owners report that very cheap aftermarket parts are sometimes poor quality – which of course spoils the refinement you bought a Lexus for. Common sources of suspension noise are the anti-roll bar links and the strut rod bushes which will clonk under light braking and also make the car wander at speed.

Electronically-controlled air suspension was an option on UK-market cars but was very rare, although some of the cars imported for Toyota management did feature it. Needless to say, problems will be tricky and pretty costly to sort, mainly due to lack of familiarity.

An unusual suggestion from Lexus themselves here is to watch out for rear discs and pads ruined by someone driving with the parking brake partly applied. It’s applied with a foot pedal, but released with a handle and often drivers won’t realise it hasn’t been released properly.

Otherwise, problems should be obvious: sticking calipers will make the car pull to one side during braking and it’s easy to assess the condition of discs and pads by eye. Check that the ABS light comes on with the ignition and goes off with the engine running.

One part which is unavailable is the back plate for the brakes, so if you’re working on the brakes and yours look tatty, then clean and paint them to ensure they last. 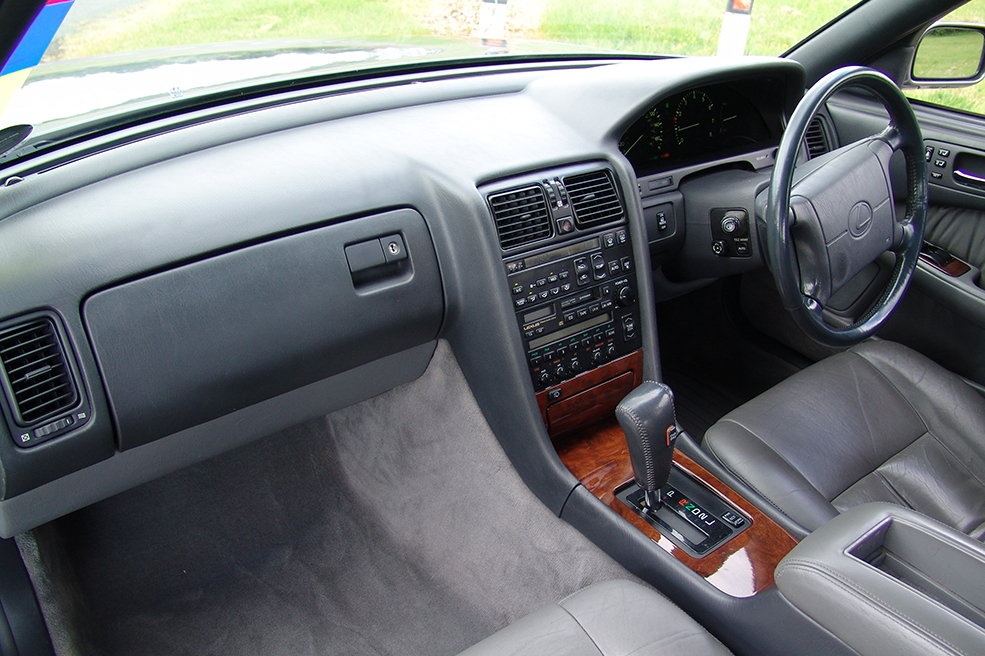 Despite all the effort Lexus put into the anti-ageing properties of the interior materials, it’s been reported that the leather used in the LS400 doesn’t seem to last as well as its German contemporaries, but this does tend to vary from car to car depending on use. In general, it will be easy to smarten up a down-at-heel interior with a leather refurbishing and colouring kit.

Like so many prestige cars from this era, the digital display on the climate control panel can fail. It can be repaired by a specialist or if you’re handy with the soldering iron – and you do need to be pretty good as it’s a fiddly job – it’s possible to buy a replacement LCD screen for around £30 and fit it to the circuit board yourself.

The wiring system is complex, but generally well made with problems minor unless things have been disturbed. One issue to be aware of is the tendency of the capacitors in the ECU to fail and eventually leak with age – exacerbated by over-current from a failed alternator. General deterioration just takes the edge off the car’s performance, but leaking capacitors can destroy the ECU circuit board. Again, it’s a skilled soldering job but kits are available to replace the components and owners report a dramatic improvement in performance. Alternatively, the ECU can be sent away to have the job done.

As a modern classic, the LS400 may lack the visual appeal of a Jaguar but their legendary reliability makes them a very practical proposition. If you fancy a left-field approach to the big luxury V8 saloon, it’s hard to do much better.

There’s also the relative ease of ownership to consider. We spoke to Toyota GB and their comment suggests that these cars are a lot better served than many modern classics : “Toyota/Lexus commits to having parts available for vehicle for a minimum of 10 years from when the last car is built. Now as we know parts are common across some vehicles. The definition  is there to cover when the part was last used on a new vehicle so in some instances a part may be available up to 20 years for a model if the part was used in other models that continued to be produced.”