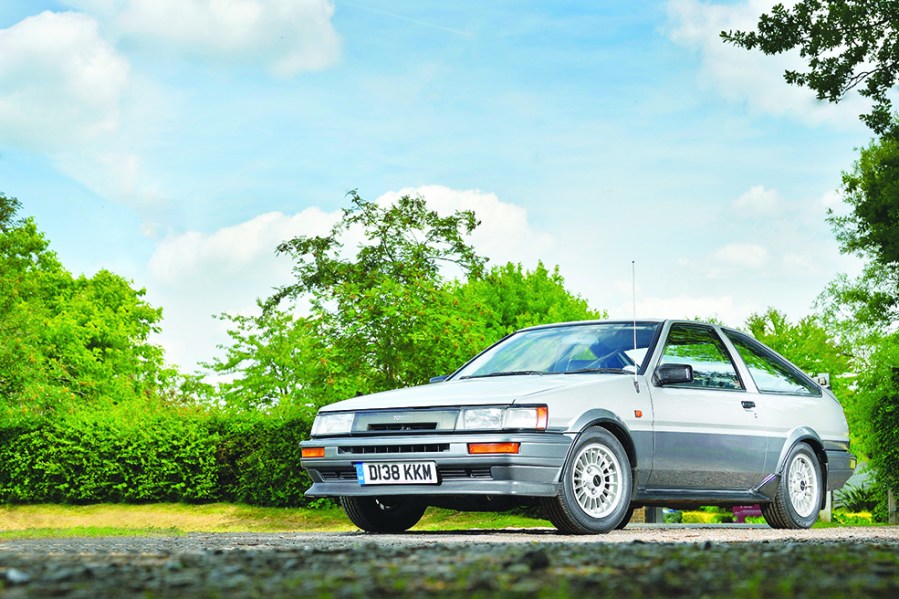 Made famous by motorsport, immortalised in cartoons and the go-to in the modified car scene; the Toyota Corolla AE86 has enjoyed quite the life, but what’s it actually like to drive?

Depending on when you were born, the Toyota Corolla AE86 will resonate differently. For those born in the 80s and 90s, the AE86 was made immortal by its appearance in the Japanese manga series Initial D – and then again in the film remake in 2005.

Those older will most likely remember the Toyota Corolla AE86 for its touring car and rallying successes. In either instance, the AE86 is a memorable car and one that is held in high regard in enthusiast circles. Known as the drifters’ delight, it was the weapon of choice for the ‘Drift King’ Keiichi Tsuchiya, the chap responsible for the creation of competitive drifting. The story goes that Keiichi would win normal races with relative ease, so decided to switch things up a bit and drift the car around corners to lift the crowds.

While the production car was successful in its own right – especially in its native Japan – the car it was boosted by its presence in motorsport both here in the UK. 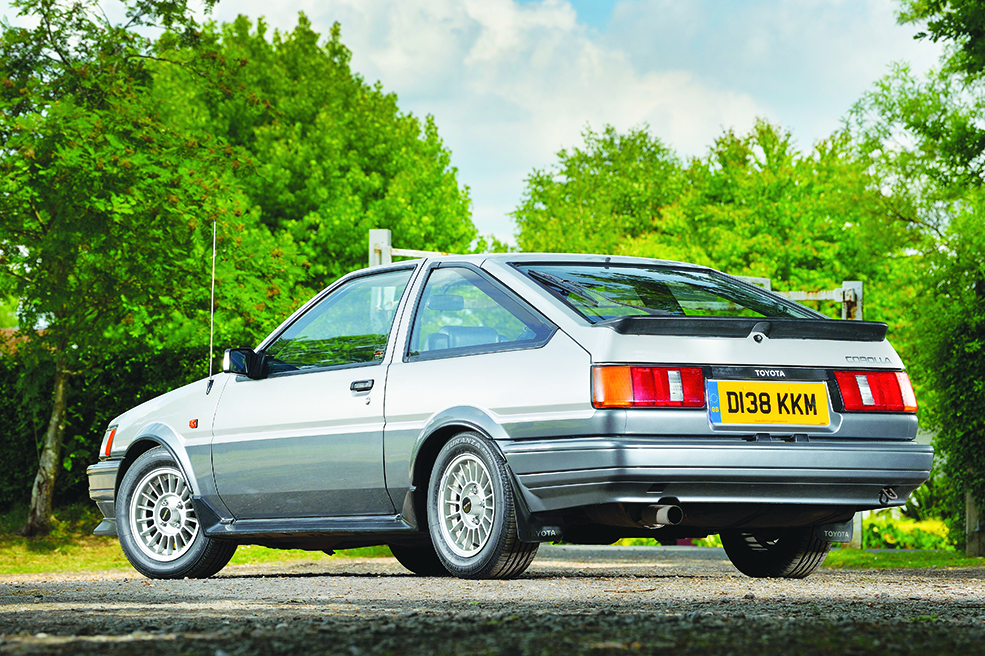 While the AE86 became famous in Japan for drifting, in the UK it became famous for winning back-to-back titles in the British Touring Car Championship in 1986 and 1987. Compare the AE86 to a modern BTCC and you’ll mistake the Corolla for being a regular track-day car.

Featuring no aerodynamic aids, underneath the livery was a bone-stock Toyota Corolla body. As per the rules during the 80s, the bodywork had to be the same as the production car, in theory promoting the regular production car much more than a BTCC car could do today.

Under the bonnet was the regular Toyota 4A-GE engine, a 1.6-litre twin-cam motor with TVIS but with upgrades. Power was up to 190bhp, with the road car figure coming in at a lowly 123bhp. 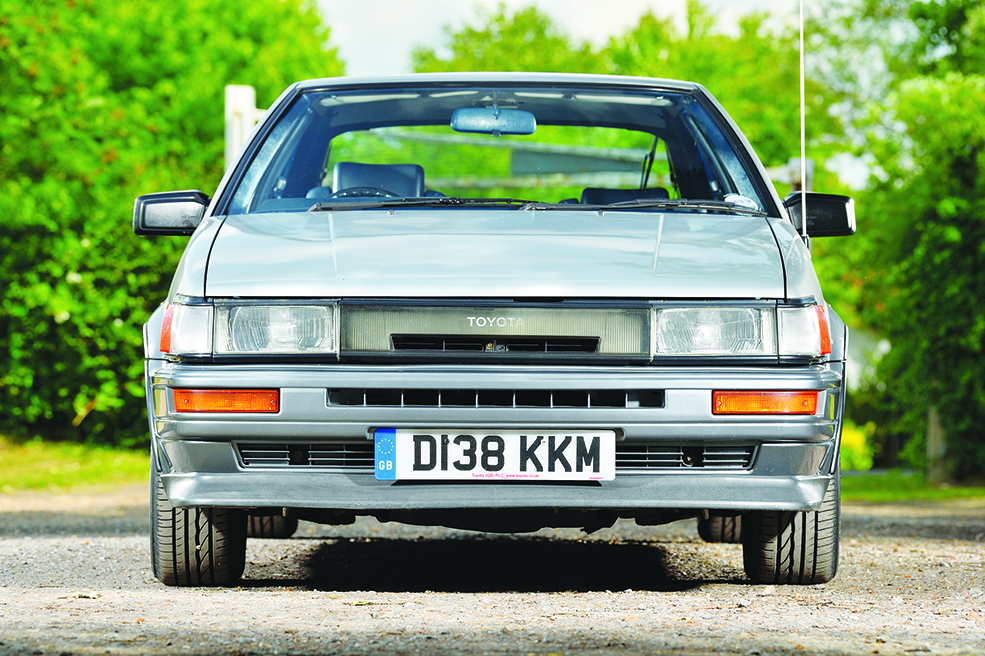 Despite not being the most powerful car on the grid, it took on those with much more power; it was that much lighter and better balanced than its competitors. Weighing in at a tiny 800kg, 190bhp suddenly propels you down the road a lot more sharply than expected.

Couple that with the front-engined, rear-wheel drive layout and the balance is perfect across the axles, making it a brilliant car in the corners. OK, the race car is lighter as it does away with all luxuries, but with a kerbweight of 975kg, the road version is still very light. 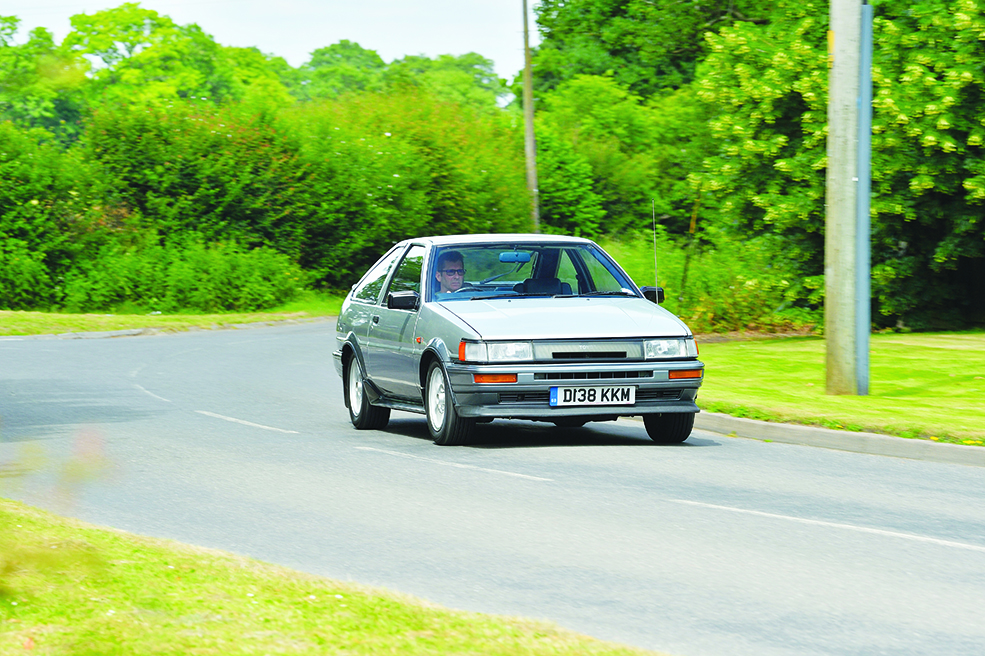 Toyota Corolla AE86: how does it drive?

Arriving on the scene in Japan in 1983, it wasn’t until 1985 that the UK market received its first examples. Featuring a beautifully tuneful 1.6-litre twin-cam engine ,which begged for revs and provided peak power at over 6,000rpm, the AE86 was an instant hit with the UK press as it breathed fresh air into an already busy sports coupe sector.

Similar to VTEC, the TVIS (Toyota Variable Induction System) worked by opening up a secondary intake control valve fully at 4,650rpm (controlled by the ECU) to feed more air into the engine and in turn produce more power. This is the sort of technological advances that Japanese performance cars were bringing to the market, coupling economy with performance. 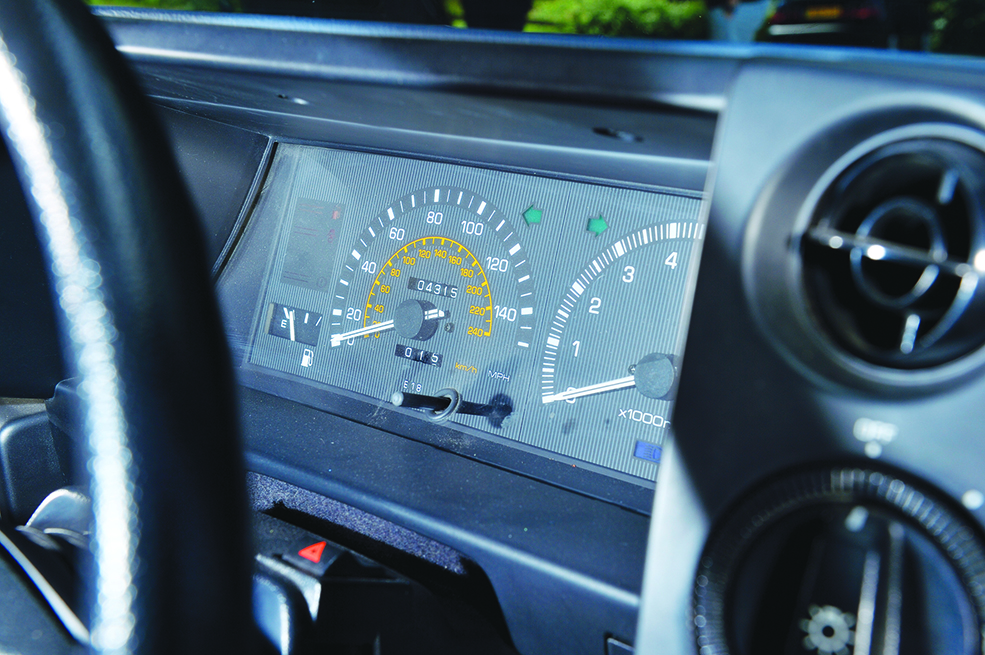 Let me be brutally honest, though; by modern performance hatch standards, this car feels slow. I’m not sure whether that’s because it felt this way in the 80s, or my exposure to other vehicles of similar stature has morphed my opinion; or perhaps that my idea of what the AE86 was like getting into the car has hindered my judgement – but I was somewhat disappointed, initially.

That being said, after five minutes of pottering about, the road opened up and a series of twisty bends presented itself. This, for me, is where the car comes alive and opened my eyes to what this car is all about.

Modern cars are often criticised for obscene levels of power, but with the weight deficit that new cars carry, it counteracts all that power. As a result, some rear-wheel drive cars have huge torque figures which make them a nightmare to control when accelerating out of corners in anything but dry conditions. 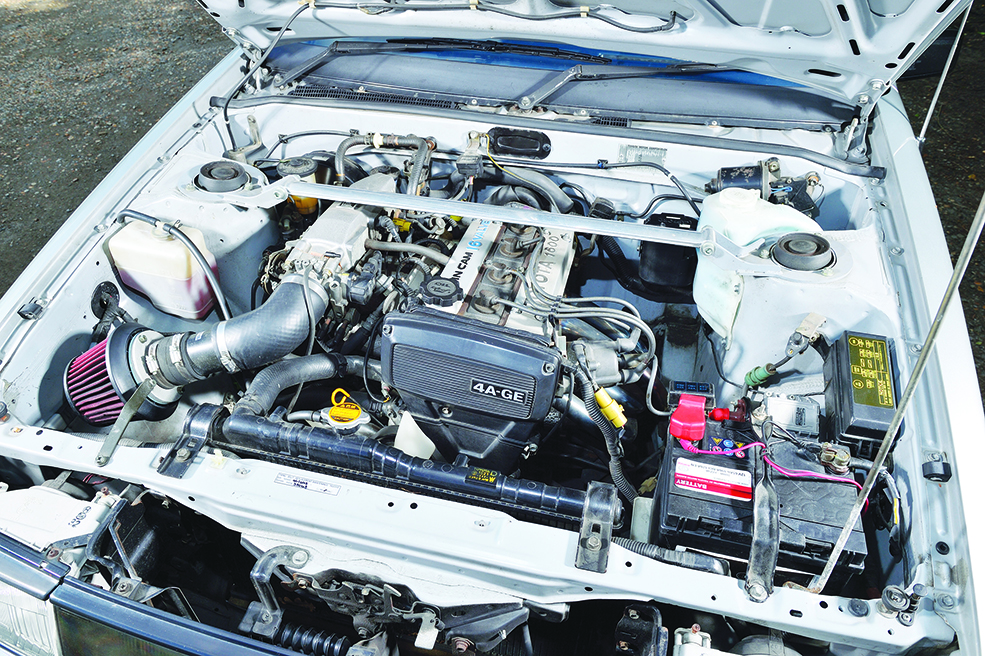 A car like the AE86 brings back that feeling of less is more. At no point did I feel that anything other than 100% throttle on the straights was too much (of course forgetting the part when I need to brake for corners). You’re never really exceeding the speed limit on such twisty roads, and so while you don’t get the same sense of speed, the whole drive is that much more rewarding.

Needless to say, there’s a reason Toyota went racing with the AE86 and why today, drifters and various other professional motorsport drivers opt for the AE86 – and that reason is its ability in the corners. It’s beautifully balanced, has nice turn-in, despite being 30+ years old, and gives good feedback through the wheel. The lack of power-assisted steering helps this but also hinders; any undulation in the road is heightened and at times genuinely snatches the wheel from your hands, which can be unnerving on entry to corners.

Its handling abilities aren’t surprising when taking into account the arguably over-engineered nature of the whole car, which boasts anti-roll bars, a limited-slip differential and inclined hydraulic dampers. MacPherson struts were used up front with transverse track control arms, as well as ventilated brake discs. 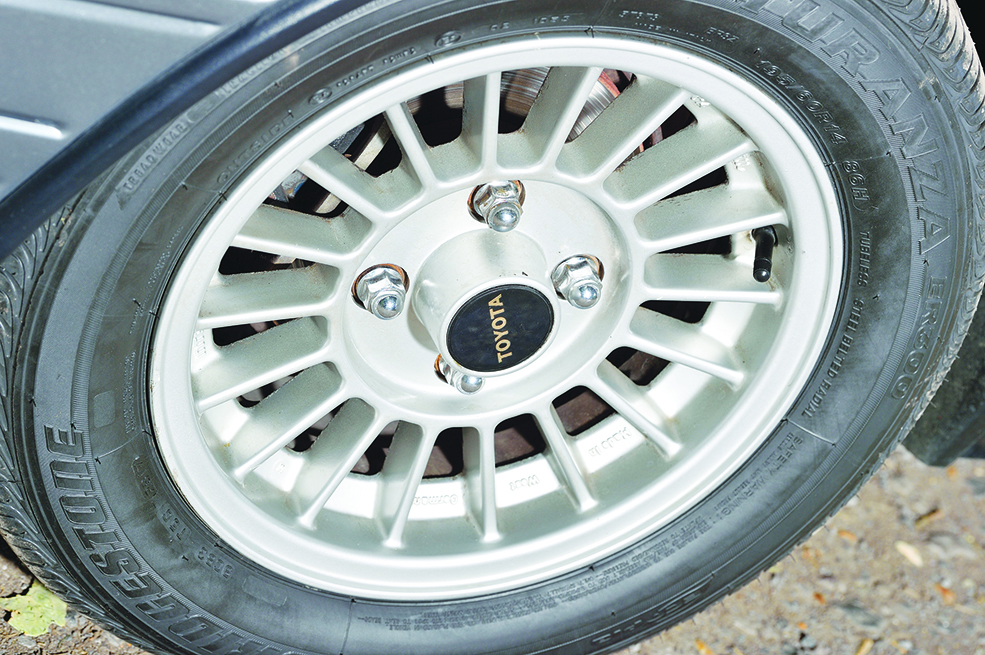 All of this came at around £7,000 when new; take into consideration that others with similar performance like the Alfa Romeo 2.0 GTV, Renault Fuego Turbo and the Ford Capri 2.8 Injection were all around the £9,000 mark, you were getting quite the bargain with the Toyota Corolla AE86.

Inside, the cockpit is typically 80s Japanese; plastics galore, blue trim and a big steering wheel. The orientation of the gearbox is odd, while the gearshift is suitably smooth, the positioning is weird, with neutral looking like fourth, and first/third gear looking like neutral. It’s angled backwards and I can’t work out why because it doesn’t aid you when pressing on in any way.

Above all though, it’s a car that leaves you smiling once you get out. It’s instantly recognisable when driving around: as the teens of Crawley screamed out when I drove by, “that’s sick mate!”. It’s pretty enough but in today’s market, finding one standard is like finding a needle in a haystack. Most will have been modified, either to an extreme standard, tastefully done, or, if you’re really unlucky, hideously maimed. 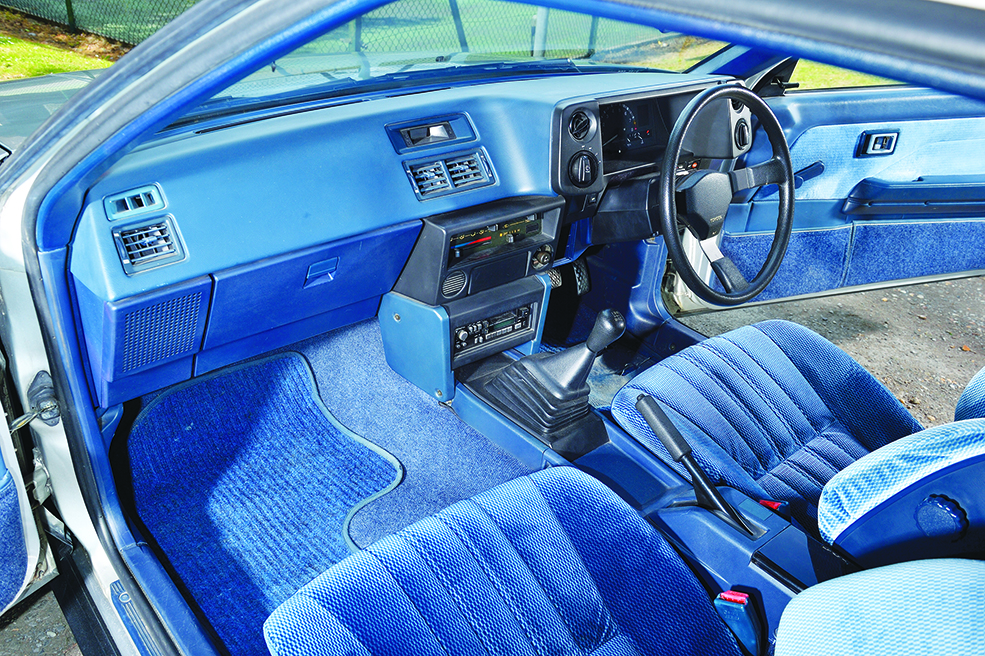 That being said, the example I drove had been modified, with the only displeasing aspect being the exhaust, which was altogether deafening. On the whole it was a brilliant car that benefited from suspension tweaks to bring with it sharper performance. Do bear in mind that while some may be modified, they could benefit from this.

Period road testers were more than happy about the arrival of the Corolla, too, with many acknowledging its back-to-basics driving pleasure. While it was criticised for its lack of refinement, it was almost excused on two bases; one being its price, the second being its focus on driving pleasure. The presence of a properly located rear axle was to most testers’ liking, although the whine from the gearbox and limited-slip differential was too much at motorway cruising speeds, with reviewers marking it down for long journeys.

On the whole, though, the Corolla was a breath of fresh air into the sports coupe market; cheap, easy to drive, great fun, but above all, an absolute hoot to drive, even today.