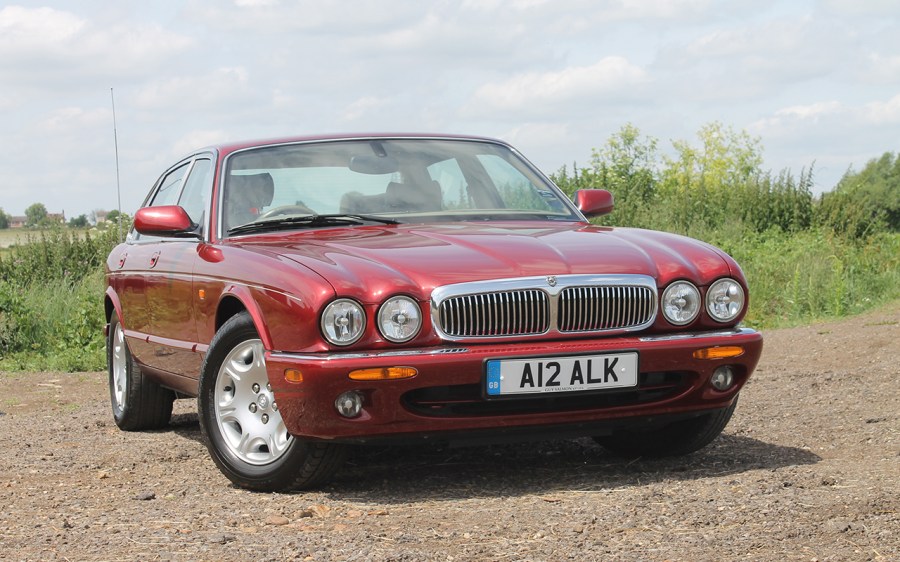 A modern classic with retro styling and a glorious V8 engine, the Jaguar XJ hit a high point in its X308 guise. Here’s how to buy one

In his autobiography of his time at Jaguar, former chairman Sir John Egan recounts how he originally considered Ford to be unsuitable partners for Jaguar. “The Ford way was moving metal with grim determination, strictly to the letter of the Ford book,” comments Egan. “I could find no place in this for Jaguar’s traditions of ‘Grace, Pace and Space. As our advertising slogan had once put it.”

This was reflected in the opinion of industry watchers in general when Ford did indeed acquire the company in 1989. It was generally reckoned that Ford would sacrifice jaguar’s identity on the altar of profitability, with the product quality declining as returns increased. To the surprise of everyone though, quite the reverse happened, Jaguar claiming when the firm was sold on to Tata in 2008 for £1.15bn, that it hadn’t made a penny of profit on its acquisition. The product, meanwhile had improved out of all recognition and one of the first fruits of this was the so-called X300 incarnation of the XJ saloon.

The accepted version of events is that back in the mid ’80s a proposal for an all-new saloon as a replacement for the XJ40 was worked up under the codename ‘XJ90’, with much design work being done by the after-hours ‘Saturday Morning Club’ which also generated the XJ220.

Alas, even with Ford backing funds were too tight for an all-new XJ when other projects took priority, so the solution was to take the nose and tail of the XJ90 and effectively graft them on to the centre section of the existing XJ40.

This might sound like a half-baked way to design an upmarket car, but it worked amazingly well, showing the soundness of the original XJ40 design, which had been further improved by a late-life facelift and improvements to the body structure.

The X300 benefited from Ford’s input into production processes and quality control, the result being a car which was reliable and properly assembled – no doubt a benefit of Ford’s clout with component suppliers.

The AJ16 development of the AJ6 engine was carried over in 3.2 and 4-litre form, with the V12 now in its 6-litre incarnation. At launch, engine options included the entry-level 3.2, the 4-litre and the supercharged 4-litre in the XJR. There was no V12 option, nor was a manual box available but the car was a winner, clocking up sales of 126,260 in the four years it was on sale and making it the last XJ model to sell in volume as the brand moved more upmarket with later generations.

Its short time on sale means the history is really pretty short, with changes largely limited to specification revisions. 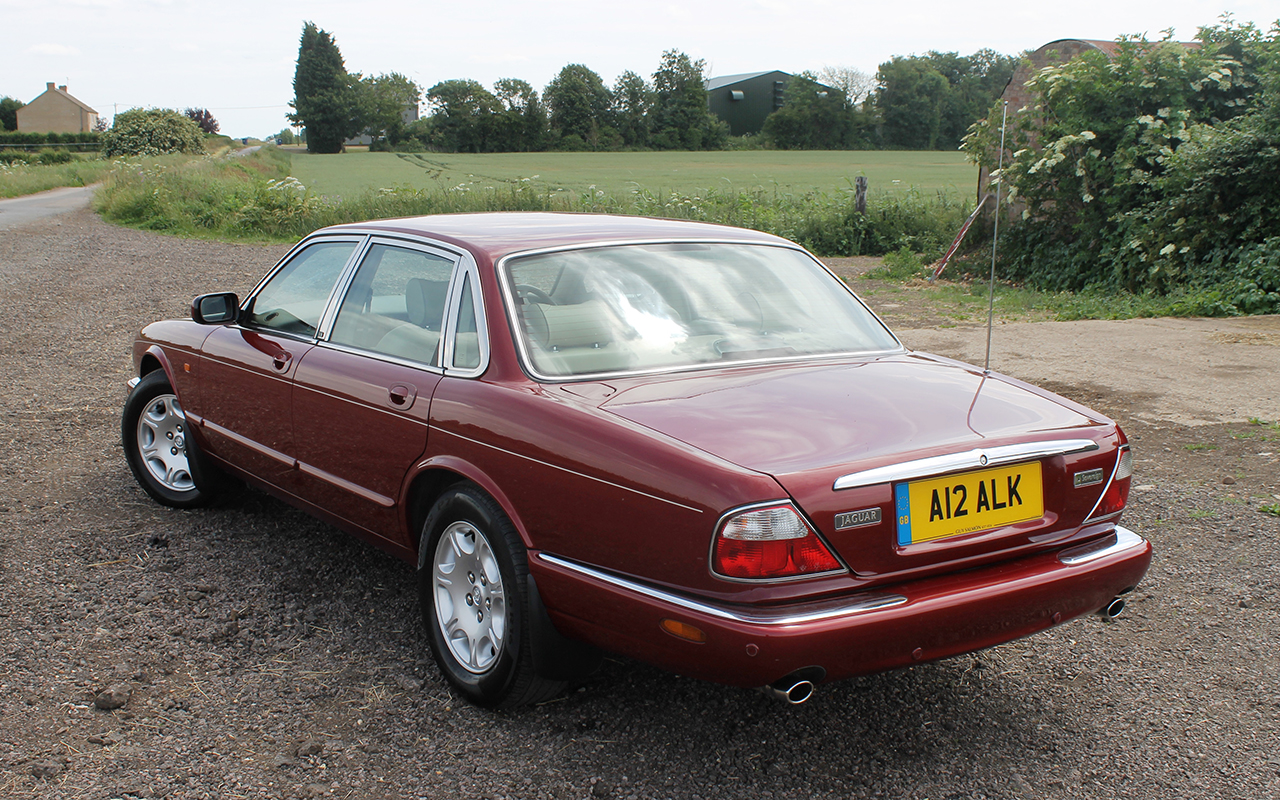 When the need to market the car with a V8 became obvious, the solution was already on hand in the shape of the AJ-V8 which had been launched in the XJ8 in 1996. The X300 bodyshell needed little work to accommodate the V8 engine and so in 1997 the X308 was launched with V8 power exclusively – marking the end of straight-six and V12 engines in the XJ range.

The X308 was launched in three models – XJ8 3.2, XJ8 4.0 and XJR – with a Sport option available only on the 3.2 and offering black window trim and vertical grey grille slats in a body-coloured surround as well as bigger wheels, sports seats, dark interior wood and stiffer suspension. The range-topping XJ8 spec for the UK market was the Sovereign which majored on luxury and was also offered in a long-wheelbase version with four inches added in the rear door area. As usual, the X308 was also marketed with the Daimler badge in both short and long-wheelbase forms, as either the Daimler Eight or the supercharged Daimler Super V8.

In 2001, Jaguar celebrated what would have been Sir William Lyons’ 100th year by producing the XJR100,  a limited edition of the XKR in black with red-stitched black leather and the Brembo brakes from the ‘R’ performance option package and 19-inch BBS alloys.

In 2002 as the all-new ‘X350’ was on the horizon, what was effectively a run-out model was produced badged as the XJ8 SE, featuring improved specification and in late 2002 the final cars left the line, with the new aluminium-bodied X350 entering production in December.

Today the X308 generation is a tempting modern classic as the ultimate evolution of the XJ40/X300 line but without the modernity of the later X350 cars. Buy the right one and they can be affordable to own and run, too. Here’s what you need to know. 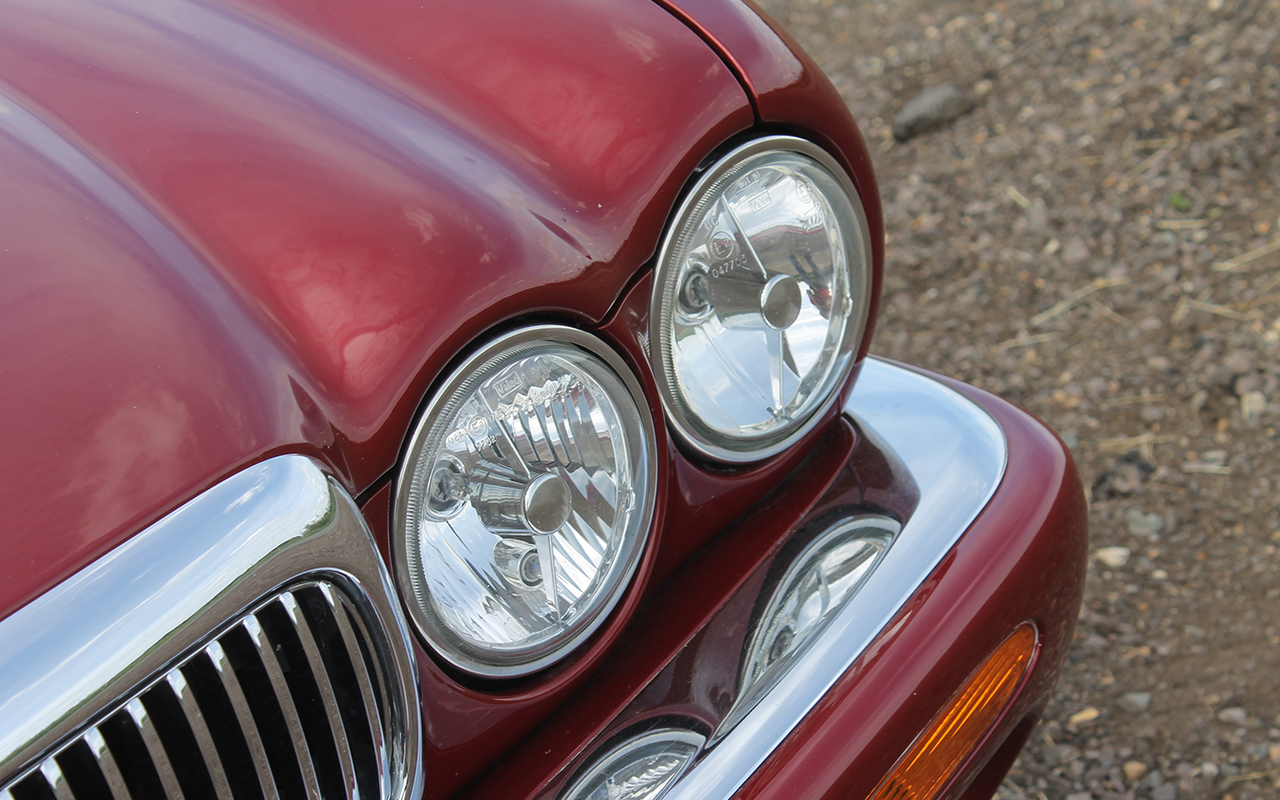 In many ways the X308 sits in a neat position between the rust-prone older cars and the surface corrosion which can afflict the later aluminium XJ and they don’t tend to suffer too badly. That’s not to day they’re immune to the effects of our climate though and they are getting on in years now. The shabbier examples will show corroded front ‘chassis’ legs as well as door corners and wheelarches, inner wings and footwells. If you find a car with rust bubbling around front and rear screens, it needs to be priced pretty temptingly as this can be a costly job in the bodyshop. Having said that, there are plenty of immaculate examples out there too, with the X308 seemingly having avoided falling into real banger territory before it started to become appreciated.

On a practical note, check that the boot can be opened with the key, since the locks often seize up with road dirt and the only way in is then to drill a hole in the rear panel. If the electric pushbutton bootlid switch won’t work, it’s an easy DIY job to replace the chromed carrier complete with the switch, or a neat repair can be performed by replacing the microswitch with a standard part for just a few pounds. 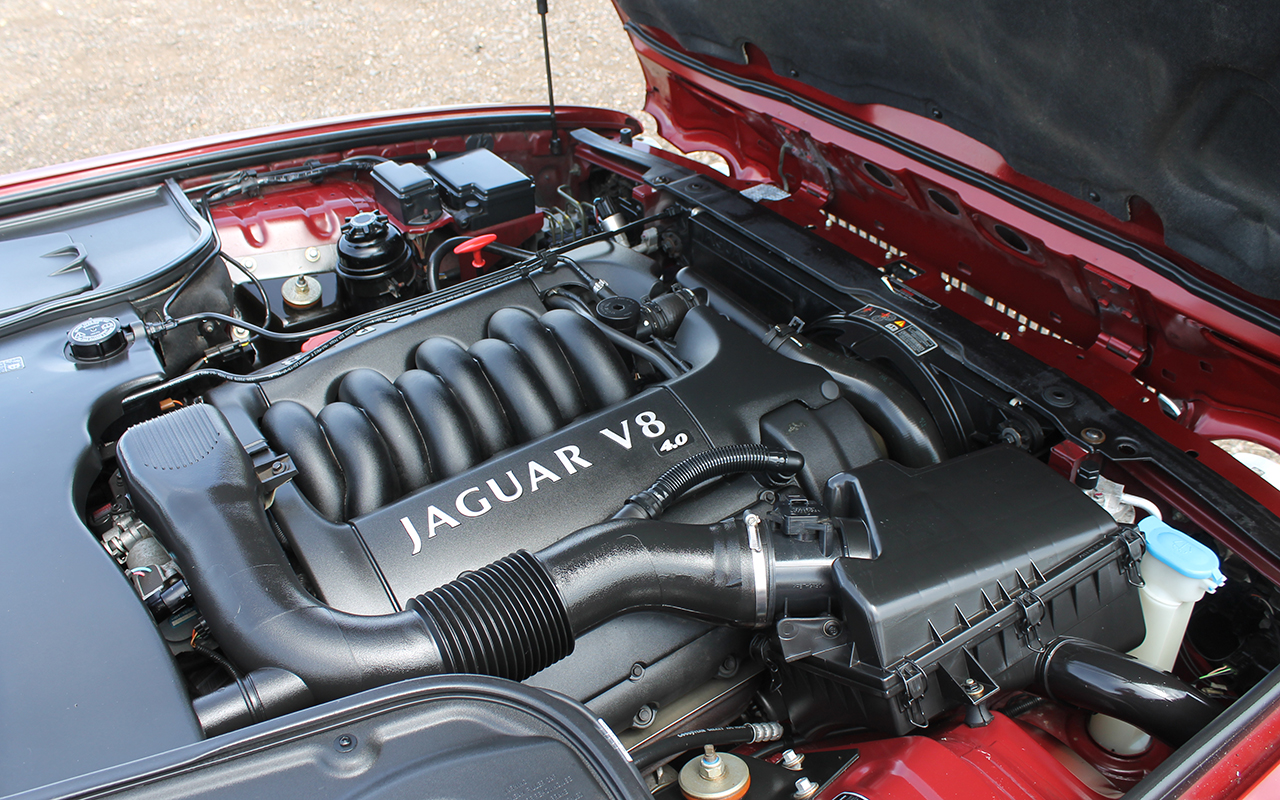 By the time the X308 was announced, the V8 engine had been in production for some time in the XK8 which had given Jaguar time to iron out any teething problems.

The one thing they didn’t address though was the issue of the nickel/silicone coating on the cylinder bores known as ‘Nikasil’ which on UK-market cars tended to be eroded by a combination of short journeys and the high quantity of sulphur in pump fuels at the time. It’s a problem which was shared by BMW, although Jaguar treated its customers rather better and replaced nearly all the engines under warranty. From engine number 000818-1043 on August 18, 2000, steel liners were used instead which avoid the problem. Many engines were replaced under warranty which is why you’ll often see this mentioned in adverts for early XK8s, while those on their original unit will in practice be fine now, since UK fuel contains much less sulphur.

Otherwise, there are two main areas to watch with the 4-litre V8: the timing chain tensioner, the upper part of which can fail, and the water pump which can shed impeller blades. Fitting the later tensioner from the 4.2-litre engine together with a later water pump solves the problems.

Apart from this, the AJ-V8 is a remarkably robust powerplant and we’ve first-hand experience in our own project cars of running them up to 150,000 miles with no problems. In fact, their reliability tends to work against them in some ways, encouraging owners to skimp on maintenance so although a fully-stamped main dealer history is unlikely on a car of this age, look for some evidence of service receipts.

The supercharged engine is generally regarded as being no less reliable than the normally-aspirated version and so it’s really down to personal preference as to whether you really need the extra shove. 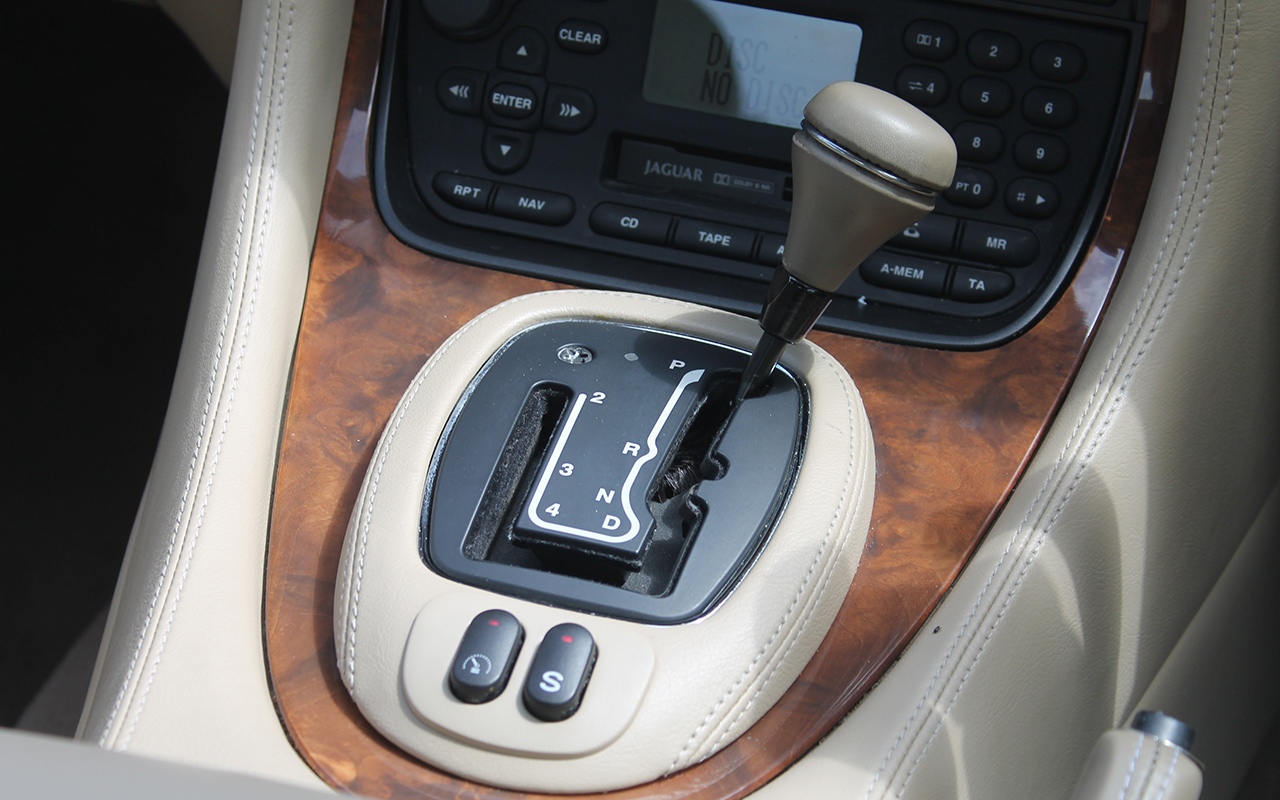 The box in these cars is a five-speed XF unit which is found in contemporary BMWs and problems should be obvious: it should engage drive smoothly and change gently without ‘flaring’ between gears. Ensure it engages drive in reverse when warm and also check the level of the fluid: black and burned smelling is bad news. It’s commonly accepted that changing the fluid and filter screen on these boxes can extend the life of them noticeably, so don’t be alarmed if you see a receipt for this work: rather than a gearbox problem it indicates a caring owner.

A noisy rear axle isn’t uncommon on high-mileage cars – a trait which persisted with the X350 too. It seems to get slightly whiney and then not get any worse for the next 100,000 miles so if it doesn’t bother you unduly then simply live with it . We’ve found it to be noticeably quieter with the rear armrest folded up, and largely drowned out by road noise above 60 mph anyway.

All the same it’s worth checking for leaking pinion seals and for perishing of the rubber coupling at the rear of the propshaft. Since the Jaguar design uses the driveshafts as the upper suspension link, it’s important that the universal joints, wheel bearings and differential output bearings are all free of play. If everything’s slightly worn, it can all add up to woolly handling. 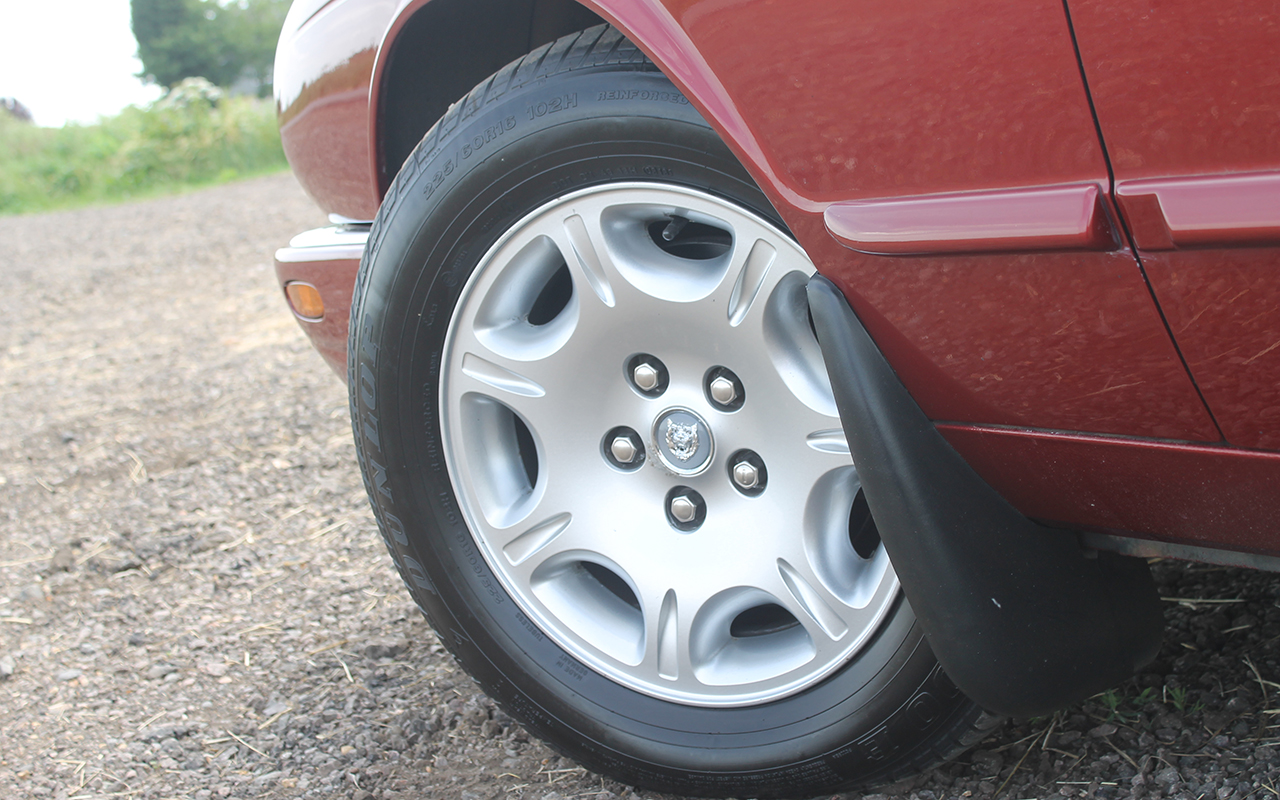 The underpinnings of the X308 are largely unchanged from the X300 which in turn was heavily based on the XJ40.

At the front end, check for split subframe mounts and corrosion in the subframe itself, as well as worn upper and lower wishbone bushes which allow the arm to move off-centre on its pivot.

Ball joints tend to last well, but wheel bearings often need replacing at 80-100,000 miles. Dampers can also feel tired by 100,000 miles although sometimes it’s just the soft upper mounting bushes which will cause a knocking when they fail.

A loose feeling from the rear end will often be down to the big rubber/aluminium subframe mounts failing, while a clunk can be due to worn spherical bushes where the dampers mount to the lower wishbone. A creak from the rear can simply be the foam isolators at the top of the springs, which can be cured with a squirt of lubricant.

Cars with the optional CATS adaptive dampers will be more costly should you need replacements, with new CATS dampers running at around £250 a corner – roughly twice the cost of the conventional units.

By the time the X300/308 arrived, Jaguar had moved away from the dreaded inboard rear discs and it’s all pretty conventional, with electronic ABS and sliding single-piston calipers all round. All cars feature ABS and this must work for an MoT pass, with the light coming on with the ignition and going out when the engine’s running. Problems are usually down to the sensors or corroded or dirty trigger rings and unlike later cars the trigger ring on the X308 is sold as a separate part. 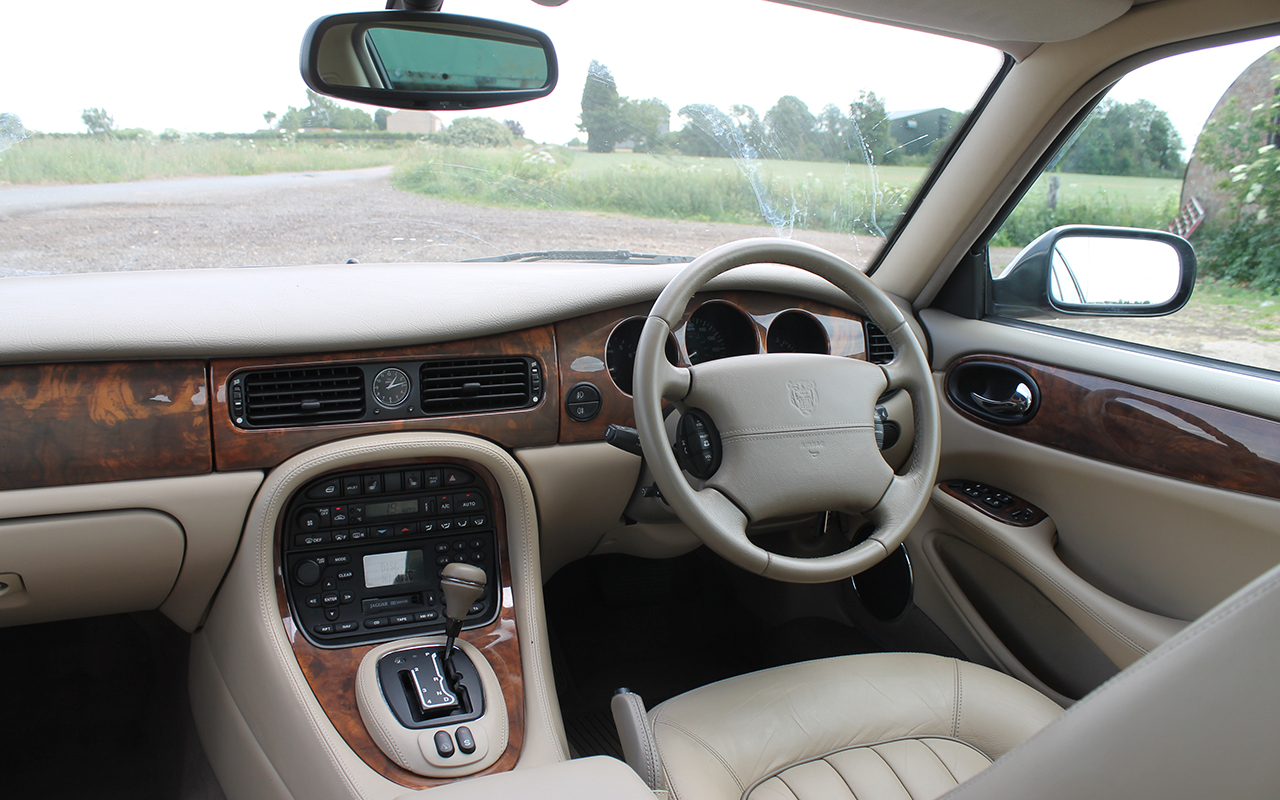 One of the biggest changes in the move from X300 to X308 was the return to a more traditional interior style with the square XJ40-derived style replaced by a ‘horse shoe’ centre console and the general quality of fittings upgraded.

The seats and trim last well if not damaged and owners report that the sports seats in the Sport and XJR models are much more supportive than the basic items although the bolsters do tend to wear easily.

As the car that represents the last of the original XJ line before Jaguar’s switch to a more modern approach for the X350-generation car, the X308 offers a nice sweet spot between classic and modern-classic.

It’s also still relatively affordable today, provided you’re ok with chunky fuel bills. Watch out for the known issues listed here and buy with caution: do that and you won’t feel short changed on grace, space or pace.