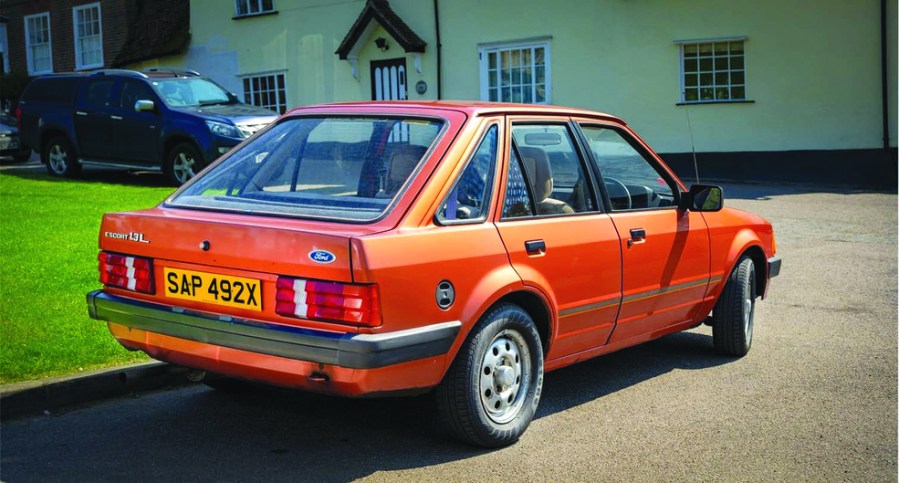 Twenty years after the Car Of The Year award was bestowed on its successor, Paul Wager revisits the Ford Escort Mk3, the first front-wheel drive Escort.

It was 20 years ago this year that the Car of The Year award was handed down to what was then a brand new badge in the Ford line-up: Focus. The new car had been universally praised at its launch shortly beforehand and would become Ford’s challenger in the so-called B-segment for the new millennium.

This of course meant leaving behind the Escort name which had served Ford Motor Company so well since 1968 and although the car would continue until 2004, the COTY trophy sealed the fact that its reign was already over.

Like the Mini, the Ford Escort is a car which has touched anyone with an interest in cars and few people can have escaped driving or riding in one. Each person’s mental image of the Escort is also a neat barometer of age, too: colleague Iain Wakefield is more of a Mk1 man, while 20-something youngsters remember timeworn Mk5 models as first-car bangers and our newest recruit at age 20 was born in the age of the Focus. 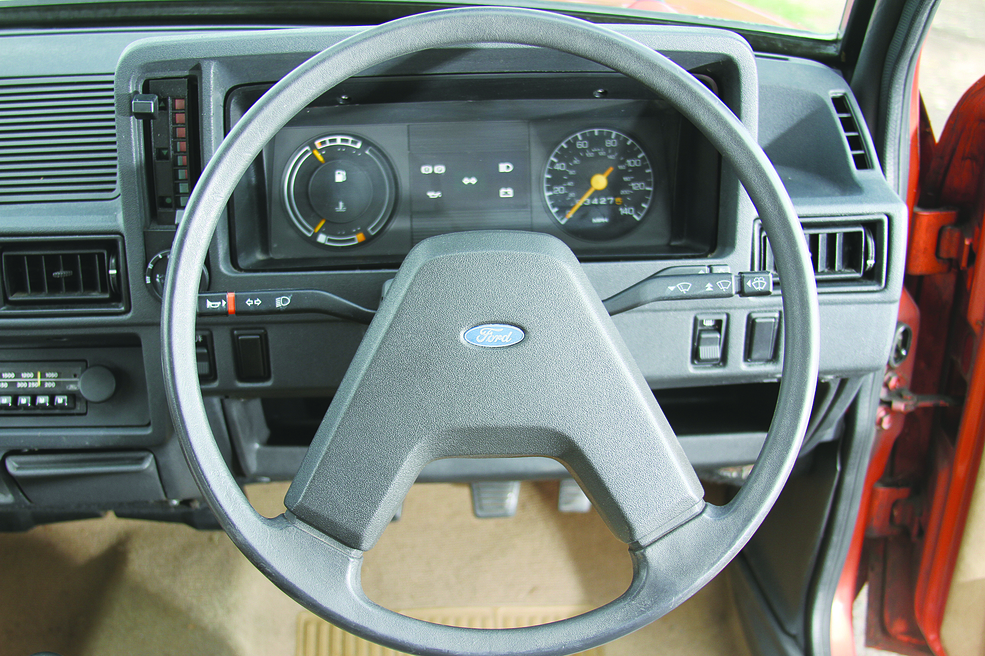 Me? Although at least one schoolfriend had a hand-me-down Mk1, I’m firmly in the front-drive Escort camp with the Escort of familiar memory being the Mk3 and Mk4 models. In fact as I type this I realise I’ve driven thousands of miles in Mk4 Escorts and in a bizarre twist my first company car wasn’t a humdrum repmobile but an Escort RS Turbo You can blame a stint editing Fast Ford magazine for that, and as a result I’ve experienced the full spectrum of Escorts from mild to a frankly terrifying 300bhp-plus.

One thing I’ve never fully experienced though is the early car in its basic form: no RS or XR badging, just a single carb, a 1300 CVH engine and wind-up windows. All of which made me curious when the 1982 example you see in these photos appeared in the CCM car park.

In 1.3L form, this was one rung up from the entry-level Popular and was the bigger seller for Ford, far eclipsing the performance models. And revisiting the early Mk3, it’s easy to see why.

The Mk3 Escort was a significant car for Ford in many ways: in a similar way to the Focus taking over from the badly-received Mk5 generation of Escort, the Mk3 showed Ford adopting wholesale change when it realised that its cynical approach and basic layout was no longer what was required by an ever more sophisticated market. It also ushered in an era of collaboration within Ford of Europe, with the body design performed by Ford of Germany in Merkenich and the powertrain development, chassis engineering and interior design performed here in the UK at Dunton.

Work began in late 1976, by which time the front-drive/transverse engine layout was the accepted format in the European small-car market and so there was no question that the new Escort wouldn’t follow the lead set by the Golf. 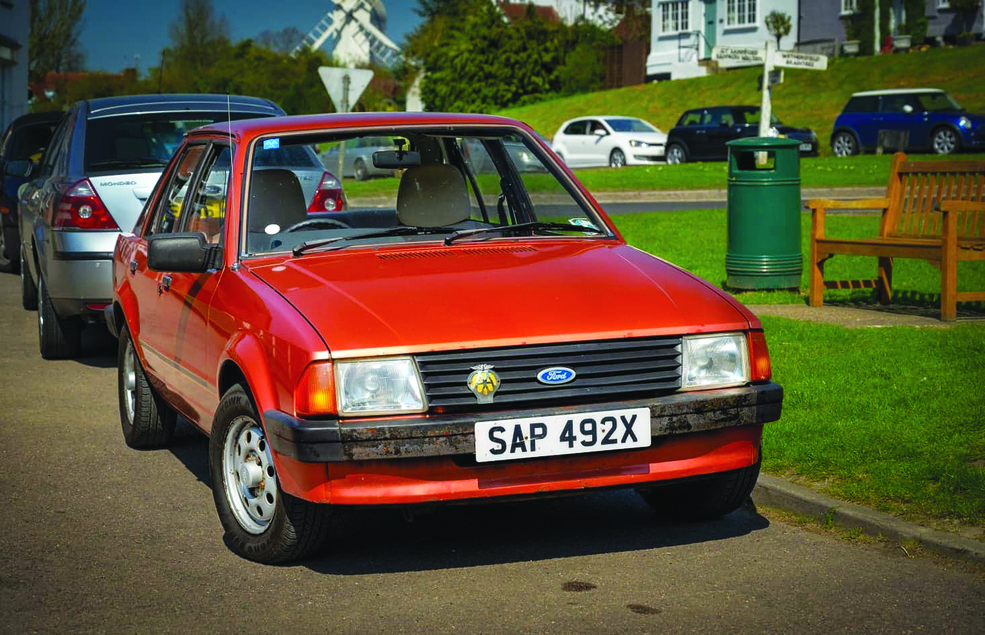 The style was driven by Ford’s corporate acceptance of aerodynamics as a means of improving the average economy of its cars – with a particular eye to the Corporate Average fuel Economy requirements in the USA. Having produced concepts like the Probe, it would be the Sierra and Escort which would bring the bold new ‘aero’ style to market – although the Escort was much more conventional than the larger car.

The use of front-wheel drive vastly improved the packaging of the new car, with much increased space inside despite being on a similar wheelbase to the Mk2 Escort. Shoulder room was also improved by widening the track by some 100mm.

Inside, the style followed the theme established by the Fiesta, with a modern ‘shelf’ style plastic moulding grouping all the heater controls together and placing the radio higher up in the interests of improved ergonomics. Something you may never have stopped to think about is that three different dash assemblies were used in the Mk3: the basic ABS moulding with no centre air vents, the L version with air vents and speaker grille and then an upmarket version with a soft-feel skin and integrated centre console.

The neat exterior style was the work of a team led by Uwe Bahnsen and the ‘bustle back’ rear hatch allowed the Escort to better the Golf’s Cd figure of 0.43, finally coming in at just 0.389. The underpinnings were similarly modern: gone were the leaf springs and in came a coil-sprung independent rear end with MacPherson struts used at the front. 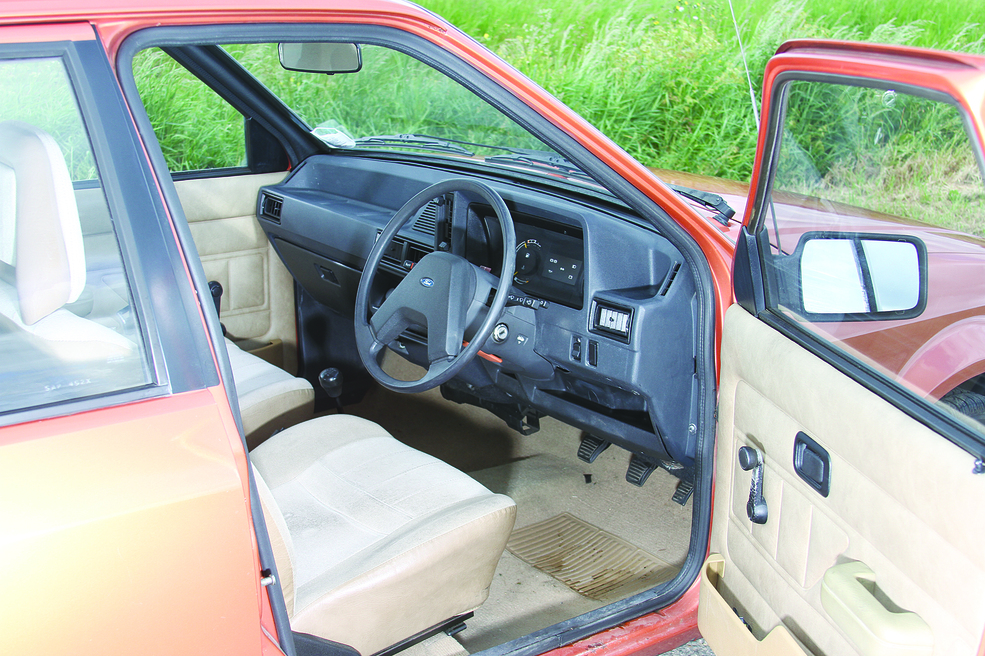 The Mk3 was launched in September 1980 and represented a colossal investment by Ford – reckoned to be of the order of £500 million, plus the same sum again to develop the new range of CVH engines, the acronym signifying Compound Valve angle, Hemispherical head. The award of Car of the Year in 1981 must have been a welcome recognition of the level of finding the project had been given.

After the Mk2, the new car was a revelation and in its bright Celtic Bronze paintwork, this 1.3L shows off the neat Erika shape to its best advantage. Here was a car which was thoroughly of the moment and a world away from its predecessor – which in reality dated from the ’60s, the Mk2 having been little more than a thorough update of the Mk1.

Compared to the Golf, the Escort was a much cheaper offering but in the context of the early ’80s, the two weren’t as far apart as popular opinion would have you believe. Back when this example left Halewood, the Golf was still in its Mk1 guise and although the steel is indeed slightly thicker and the doors shut with more of a clunk, the early Golfs were pretty basic, especially the interiors of the non-GTI models.

In fact the Escort feels like the more spacious of the two, with its lower dashboard and greater use of light colours inside this example. Bahnsen’s signature bustle-back also allows for usefully greater boot space too. 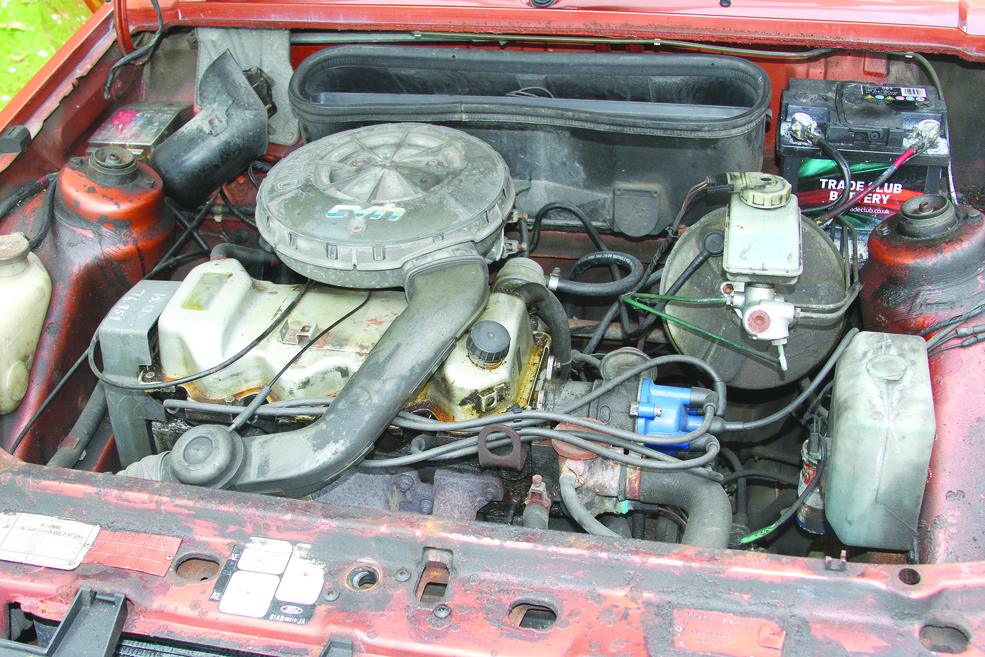 The early Mk3 cars like this predate Ford’s adoption of the stubby Chubb security keys which later appeared on everything from Sierra to Aston DB7, so it’s an old-school slender blade key which fires up the CVH motor. The use of an automatic choke made this car a fuss-free animal to live with… or at least, back in 1982 that was the theory anyway.

As we later learned, automatic chokes were a mixed blessing, while Ford’s Motorcraft-branded Variable Venturi (‘VV’) carburettors gained a less than stellar reputation for cold running and smooth power delivery.

Despite that, on a warm spring morning, the Escort bursts into cheerful life with the crisp exhaust bark which will transport many readers straight back to the mid ’80s. It needs a bit of a tickle with the throttle for a few seconds before the idle settles down, but given this example’s 37-year age, we’ll forgive it that. A Weber conversion was a popular solution to ageing VV carbs back in the day, but somehow that would seem like sacrilege on such an original survivor.

With the CVH burbling happily away, first is selected via the slightly rubbery shift and the Escort proves it easy-to-drive credentials with a light clutch and easy steering despite no power assistance, a legacy of the slender tyres.

Compared to my old RST, the 1300 is no rocket ship but it displays an eager feel at odds with its lowly status on the model ladder. Rated at 70 bhp, backed up with 74lb.ft torque, the CVH will power the 850kg Escort to tantalisingly shy of the ton at 98mph, while the 60 mph sprint takes 11.9 seconds. In comparison, the 1300-engined Mk1 Golf offered just 60bhp and was all up at 93mph as well as being a couple of seconds behind in the 0-60 race. 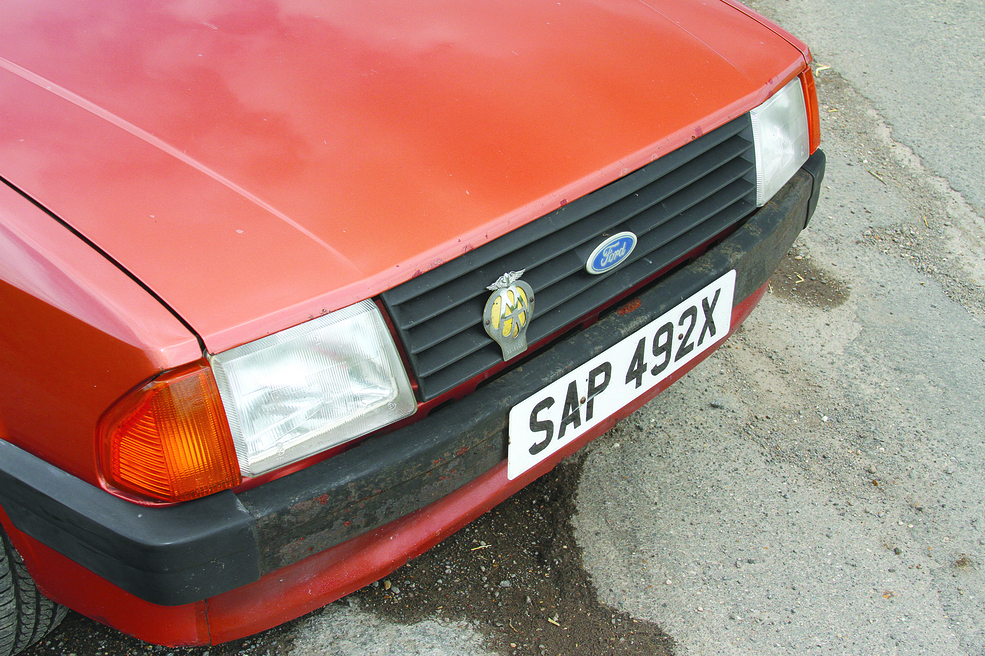 Back then these things mattered to any student reading the specification pages of Autocar under the desk in O-level Chemistry lessons and, more seriously, was one of the reasons for the Escort’s success. Vauxhall’s Astra offered similar performance, but the Peugeot 205 wouldn’t be unveiled until a year after this Escort was registered and the old 104 was an anachronism, while the Renault 5 was an oddball choice and the Volkswagen was so much more expensive as well as appreciably slower.

As ever, Ford knew how to get buyers to sign on the line at their local Bristol Street showroom: the L spec in this model brought you headrests, velour seats and a radio – even if the gearbox did offer just four speeds. In the right colour it looked the part and there was always the lure of trading up next year to a GL or even the giddy heights of the Ghia.

Out on the road and up to speed, the Escort zips along confidently, keeping up with modern traffic confidently despite its age. Win and road noise are higher than a modern hatch of course, but compared to a Mk2 the Mk3 is in a different league – certainly closer to a modern day Focus than a 1950s Anglia. 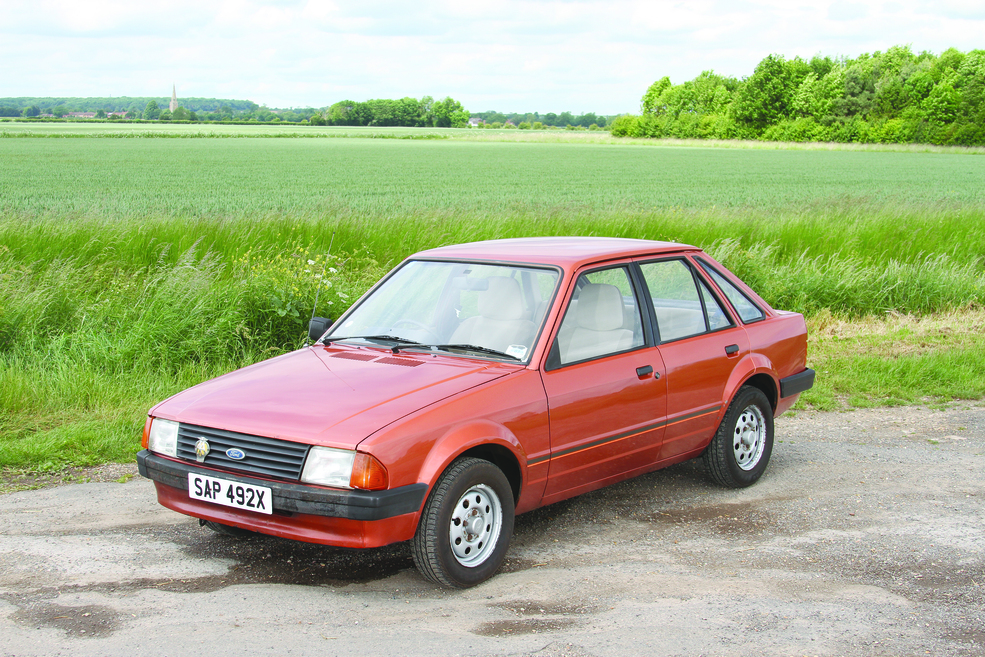 Venture on a to a dual carriageway and you’ll still manage for pace, but at the expense of your eardrums, as the lack of a fifth gear makes itself felt. The five-speed would be introduced the following year but would remain an option on the 1300 models.

Ditching the leaf-sprung live rear axle of the Mk1/2 for a modern front-drive layout made the car much safer for the majority of drivers and improved the ride immeasurably, but keen press-on types did find the somewhat wooden handling of the Mk3 slightly limiting. In truth, it’s not something you notice on the basic and mid-range models, but the XR and RS-badged cars did compare unfavourably to the competition in terms of their slower steering and jouncy rear end. Not that it really mattered: Ford still managed to shift Escorts of all types by the bucketload.

A measure of the third-generation Escort’s success comes in the fact that when a mid-life rejuvenation was needed, the car was simply smoothed over and updated superficially, the same basic design used for what Ford referred to internally as ‘Erika-86’ and we know as the Mk4. The bones of the Erika platform would also continue in much-modified form under the Mk5 car launched in 1990. By then the car was becoming outdated and received the harsh but justified pasting which resulted in the switch to the Focus name.

In respect of which it’s perhaps best to remember the front-drive Escort in the middle-ranking form in which it was at its most successful as family transport for so many and there’s no better example than this 1.3L.