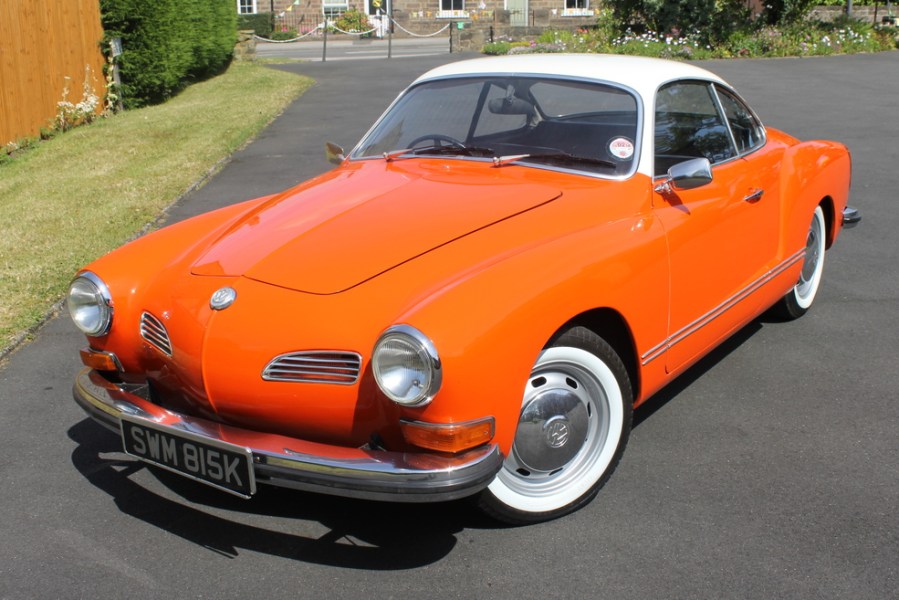 Underwhelming isn’t a phrase that lies comfortably with the sports car concept. So of these two performance underachievers, upon which has the passing of time been the kindest?

It’s not easy for car manufacturers to get it right all the time. Which is why so many sports cars spawned from the germ of a good idea which made perfect sense on paper never really end up cutting it with customers. Their lack of success is usually down to poor execution, poor timing or the political posturing over posh dinner tables which scuppers the chances of producing anything vaguely appealing. 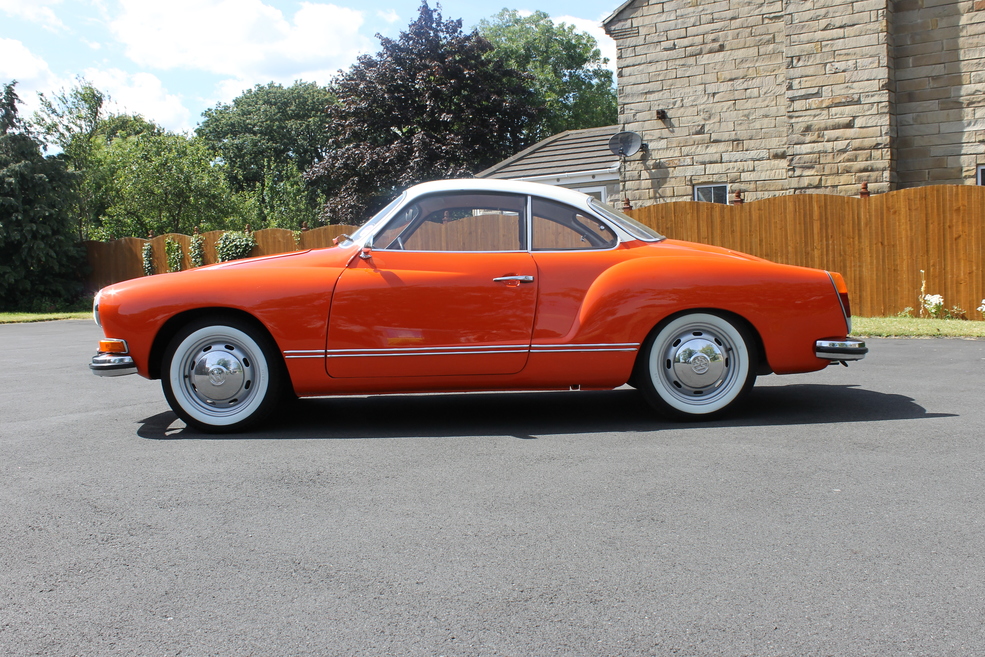 That’s not to say the Karmann Ghia and Sunbeam Alpine aren’t good cars; they are true classics in their own right, and both have a strong following today. It’s just that they could probably have been better, that’s all, a bit more like the much sportier sports cars they mimicked. So out of the two, which would we choose?

Remember the legendary Volkswagen ad featuring a red Karmann Ghia driving majestically along a deserted Californian beach with the commentary boasting, “The Volkswagen Karmann Ghia, the most economical sports car you can buy?” It looked great until it unsuccessfully tried to punch its way through a wall of paper, the apologetic voiceover concluding, “It’s just not the most powerful.” 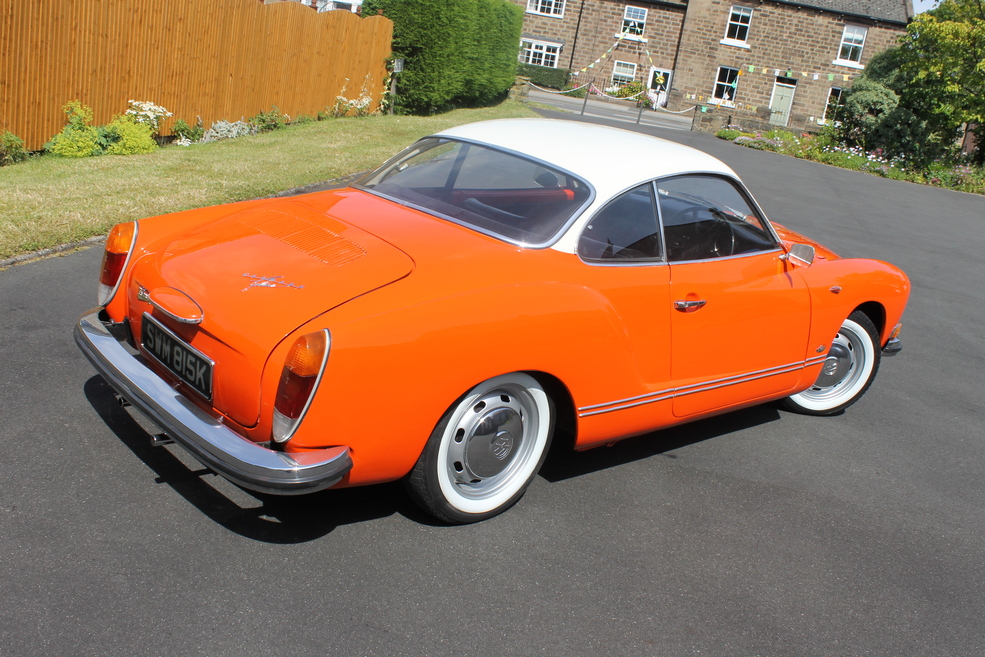 Other adverts described the Ghia as ‘The Volkswagen for people who don’t like Volkswagens’ and a ‘sensible sports car’ which, though clever, did little to attract hard core sports car buyers. As far as we are aware, the quick thinking executives at ad agency DDB overlooked the most obvious slogan – ‘A sheep in wolf’s clothing’ but maybe that’s just as well.

And that self-depreciation just about summed up the Karmann Ghia; it looked fast, but the fact that its performance was about as flaccid as the Beetle upon which it was based invariably let it down.

But there was always more to the KG than the number of horses that humble air-cooled engine out back could pump out. Designed by Italian styling house Ghia, under the supervision of Luigi Segre, it was simply beautiful to look at. It was the thinking man (and woman’s) VW, and because each one was built by hand and therefore expensive to make, you had to dig a little deeper in your pockets to own one. Unlike the Beetle, the Ghia’ s body was made up of complex panels welded together by skilled sheet metal workers in Karmann’s Osnabrück factory. Some four metres of welding went into assembling them and every seam was lead loaded and hand finished to create those swooping, elegant lines. At its launch at the 1955 Frankfurt Motor Show the Ghia cost 7,500DM compared to a Deluxe Beetle’s paltry 4,700DM, so it was always the expensive choice. 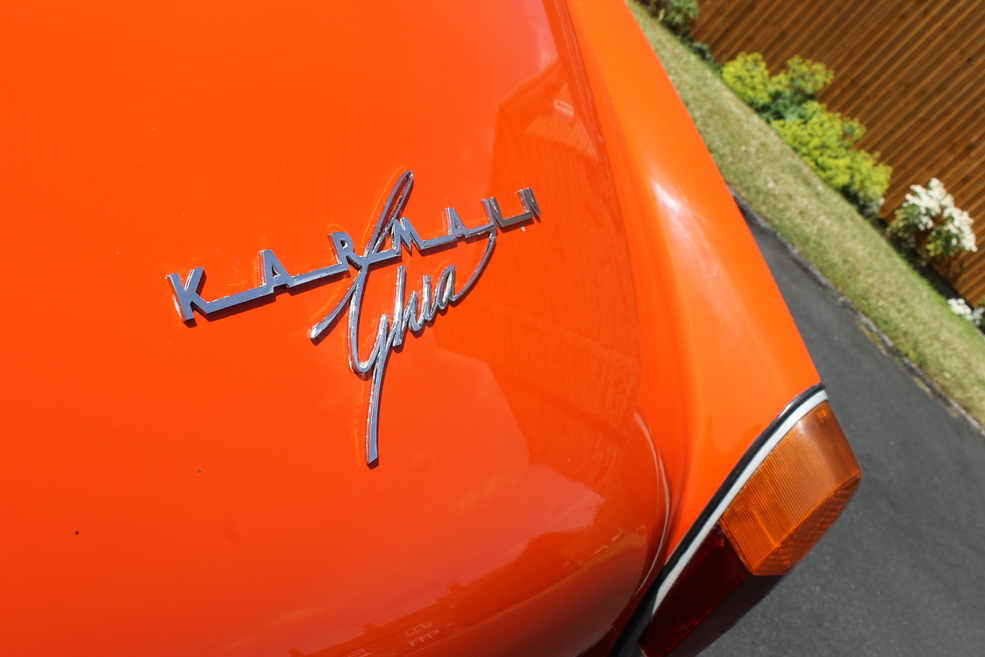 Given the designation Type 14 by VW, the Ghia had a production run spanning 19 years (1955-‘74 for the Coupe and 1957-‘74 for the Convertible). In that time, there were lots of little detail changes. The first of the big ones came in 1957, when the first Convertibles went on sale, followed by August 1959 (for the ‘60 model year) when the front headlights were moved 45mm higher up, the nose grilles and rear lights were redesigned (signaling the end of the Low Light era) and 1970, the year that saw the addition of wrap around turn signals and larger tail lights. Worst of all (for aesthetic reasons) 1972 saw the Ghia gain square bumpers in order to comply with US safety legislation. Even the most diehard Ghia lover will admit earlier cars are the prettiest, even if they aren’t the most technologically advanced.

When it comes to values, if you are on the look out for a bargain Ghia we’re sorry to inform you that you are about a year too late. That particular boat set sail when the rush for Split Screen Buses began to wane a little in 2018 and the scene turned its attention to the glamorous KG instead. Later, less elegant ones with the square bumpers are still relatively cheap (from £6,000-£8,000), but because aesthetics are all important with this car, would it be a sacrifice too far we wonder? Given the choice, we’d spend our money on a solid ’60s project from the US, pay £12,000 for a complete car with original paint and gradually bring it back to mechanical perfection. For reference, an early Convertible in original spec might be as much as £30,000 today.ith some 364,401 Coupes and 80,899 Cabriolets produced, there are still a lot of Ghia’s to choose from. Mechanicals are cheap to repair, whilst the hand-formed bodywork is not. In a nutshell, everything that is specific to a Ghia is going to cost a lot, everything that is Beetle-based, not so much. That means a good, solid car with tired mechanicals is always going to be a better bet than a rusty one that runs and drives. For that reason US imports usually make the most sense, but because it’s come from across the pond doesn’t guarantee no rust so careful examination is still essential. 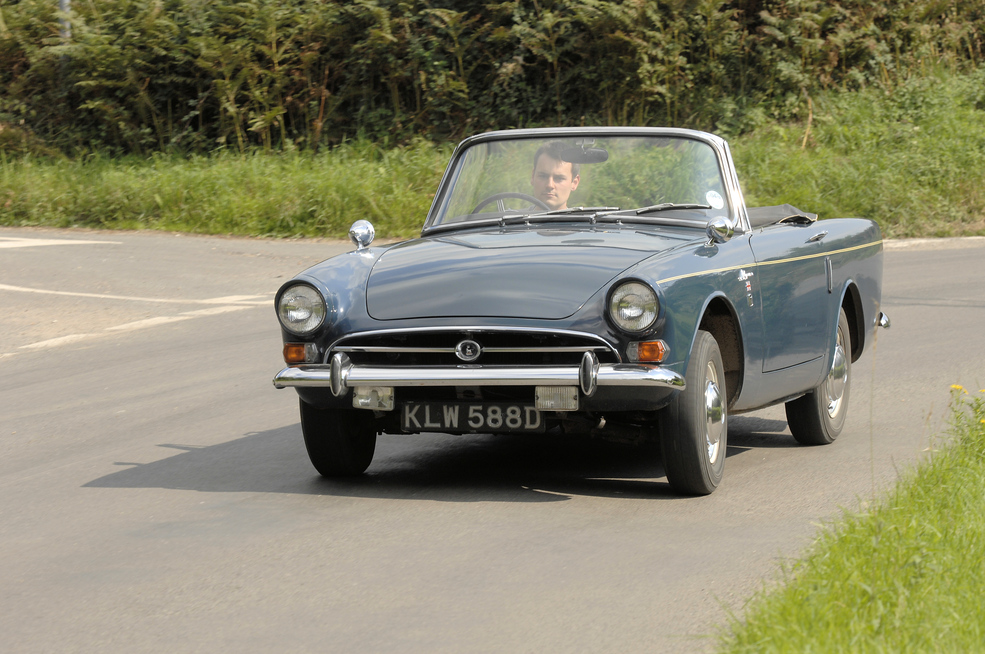 The two-seater Series Alpine was made from 1959 until 1968 – so it was ever so slightly less long-lived than the Volkswagen. Rootes raided the parts bin to build it, grabbing bits from the Hillman Husky no less (its floorpan to be precise) while the aluminium head 1494cc motor came from the Sunbeam Rapier. It also featured disc brakes up front, no doubt from another member of the Rootes group, which was advanced for a car of its era. Especially as the KG only got discs with the arrival of the 1500 almost a decade later.

The Alpine’s wedge-like shape was the work of Raymond Loewy and Ken Howes (who had previously been employed by Studebaker) – the same Stateside duo who designed the Rapier, hence the prominent rear fins.

Like the Ghia, it evolved as the years passed by. In 1962, the Series II appeared with the Rapier’s latest 90bhp 1592cc powerplant which slashed the 0-60mph time to a more sports car like 13 seconds. Hardly lightening quick, but not bad for the time. More importantly, the suspension got a revision which meant spirited drivers could make the best of what performance was on offer when they hit the twisty A-roads. 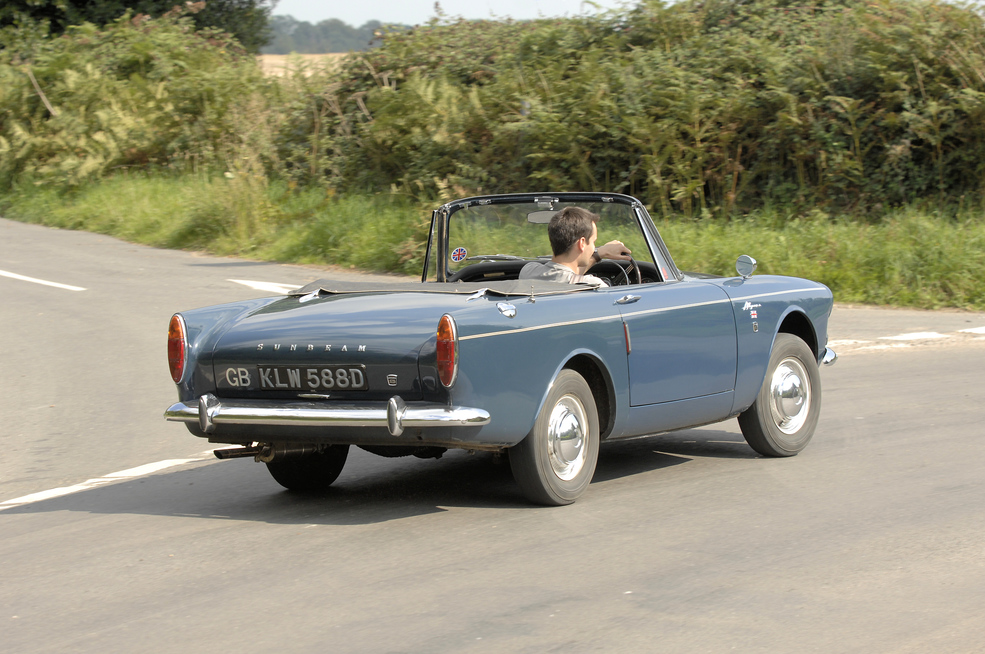 The Series III (1963-’64) had twin Zenith carbs and a smarter wooden dash with a panoramic array of round dials for extra drama, while the Series IV (1964-’65) had scaled down rear fins, a little more power and the option of an auto transmission.

Of course, the real jewel in the Alpine crown came with the Series V in 1965 which was boasted the punchy 1725cc, five-bearing crank engine.

Bear in mind, by this point the Alpine was looking a lot neater visually, both inside and out, and with the addition of the 93bhp engine, was now easily capable of 100mph. Okay, it still ran short of what a sports car should be in many respects – the V8-engined Tiger version addressed that – but it was certainly heading in the right direction.

In short then, while the Karmann Ghia evolved in a similar way, getting more power as the years rolled by, it was progressively ruined visually. In contrast, the Alpine went the other way and became more subtle, more attractive – and more sophisticated to boot. Squint hard and a nice Series V in an attractive colour (there were lots of them, including Mediterranean Blue, Orchid Blue and Signal Red) with Minilites, and maybe a hard top, and it will easily look as chic as an early ’60s Ghia. Not as elegant, perhaps, but in truth few cars come close to the Ghia when it comes to swoopy romantic styling. 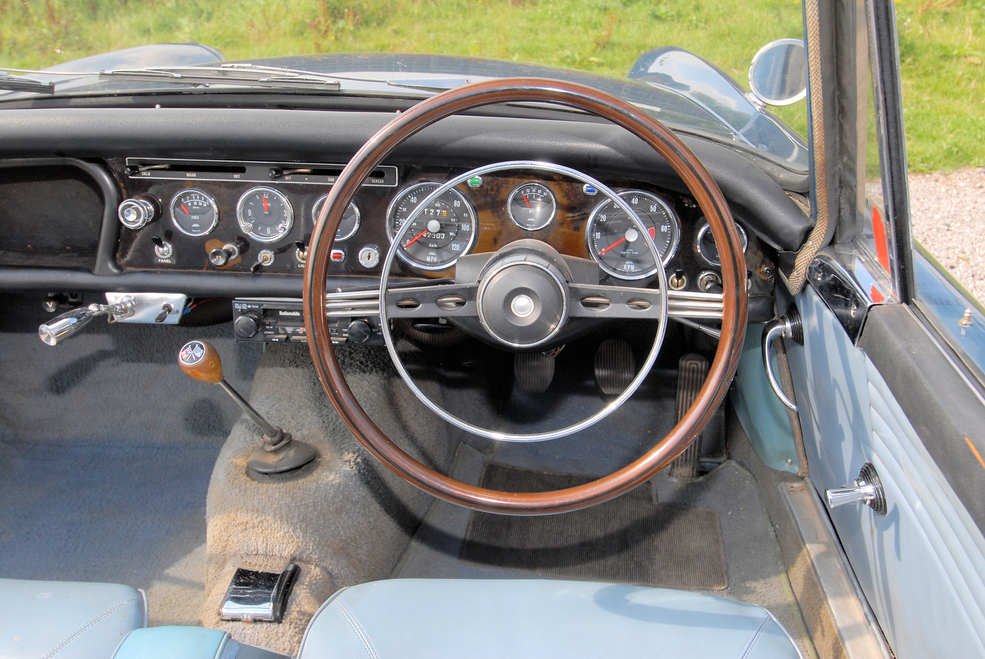 Like the VW, rust can ravage an Alpine. The key according to the owners club (www.sunbeamalpineowners.club) is to jack the thing up via the rear jacking points and see if you can still open the doors; if you can, then it probably relatively solid. If the owner winces at the suggestion, or flatly refuses, suspect severe rust in the sills, the ends of the cruciform and the front mountings for the rear springs as well as the rear spring hangers.

You’ll pay a little less than you would for a Ghia. Projects kick off at £6,000 while earlier Series runners can still be purchased for under £10,000. Even concours Series V with a desirable hard top will be under £20,000.

The Alpine puts up a good fight, but whether you can resist the appeal of that legendary Volkswagen build and the early Ghia’s jaw-droppingly beautiful profile is another matter. 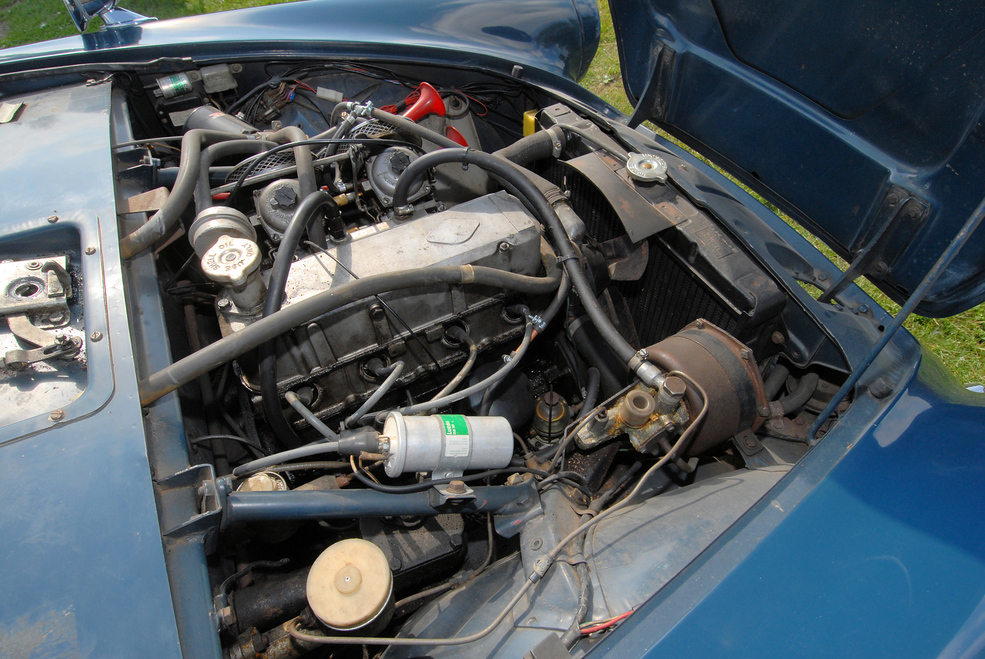