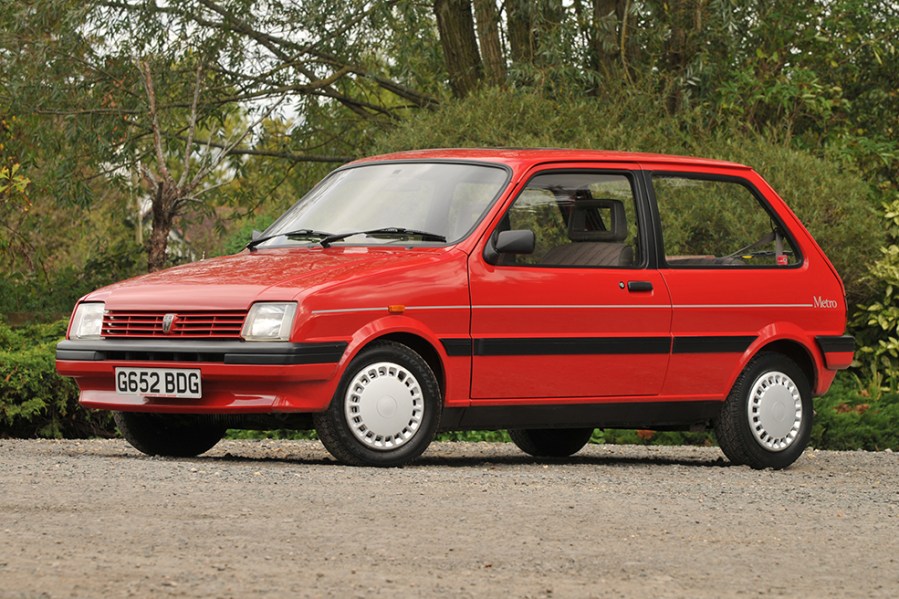 We revisit the swansong Metro Clubman, which despite lacking a marque badge and packing only four gears remained a competitive contender into the 90s

The elderly gent out walking his Labrador had every right to look confused. As to whether it was the sight of a pristine 1990 Metro trundling past or a clearly deranged photographer shouting “Now we’re Metro-ing!” from the verge was unclear though.

He had every right to be surprised though: when was the last time you saw a Metro in daily use? Suddenly the car which was supposed to replace the Mini (but never did) has become a rare sight, with seemingly more of the early cars having survived than the later examples like this one. Indeed, registered in 1990 this must be one of the very last A-Series Metros made before the revamped Rover Metro arrived.

By then the Metro was seriously old hat, the design having its origins in the ’70s when it was conceived as a replacement for the Mini. As history has shown us, the car ended up being outlived by its predecessor, but at launch the ‘British car to beat the world’ had a lot going for it.

The car’s long gestation period had involved at least one ‘back to the drawing board’ moment commanded by BL chairman Michael Edwardes after a ride-and-drive event convinced management the car simply didn’t have what was required in the face of foreign competition from the likes of Fiat and Volkswagen… but although it delayed development, this proved to be very much a good thing in the long run and the finished production car was far superior to the ‘ADO88’ prototype the directors had first evaluated.

With precious little budget and even less time, it’s to the credit of the BL styling teams that they were able to take the utilitarian, van-like prototype and tidy it up into the neat little hatchback we know in just five weeks. 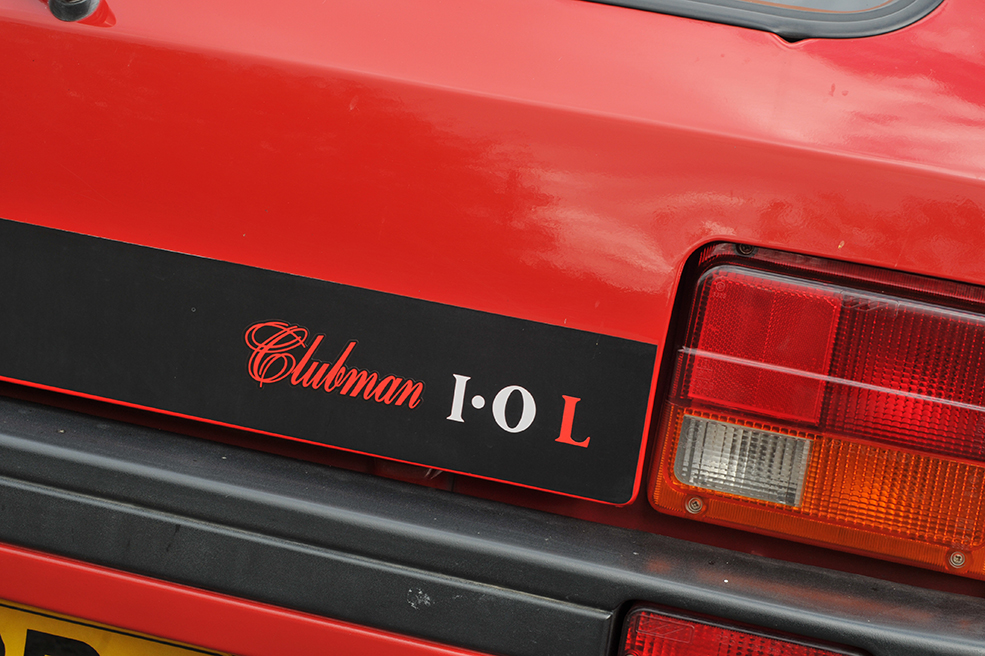 In the process, all the external sheetmetal was changed and as a result the Metro became less of a modern-day Renault 4, 2CV or indeed Mini and more of a credible modern supermini.

Underneath, the running gear was almost pure Mini with the A-Series engine, front-wheel drive and gearbox-in-sump layout beloved of Issigonis. Ironically, alternatives to the A-Series had been tried including an overhead-camshaft version dubbed ‘A-OHC’ but in development these had been proven to offer no more torque or economy than the surprisingly efficient old A-Series.

Given the cost involved for a likely small return, the project was abandoned and the Metro went to market with a mildly updated version of the older powerplant instead. Known as A-Plus, the engines incorporated improved castings for block and head, plus revised pistons, modernised carburation and other detail changes which allowed extended service intervals to match more modern competitors.

The masterstroke was using the Hydragas fluid suspension for the Metro, which allowed superb interior room to rival the Mini, but without the jouncing ride of the older car’s rubber cone setup.

The Metro was warmly received, notching up 110,283 sales in 1981, its first year on sale. This figure was in fact better than the Mini had managed since the mid ’60s, something which is conveniently overlooked by fans of the older car. The following two years saw it climb to the number one spot, which was good going, but by the middle of the decade it was already starting to look dated against newly modernised competition from abroad.

And with imported cars having gone from a tiny 5.1% of the UK market in 1965 to over 55% by the end of the ’70s the Europeans and Japanese were now serious competition, attracting even the most jingoistic of ‘buy British’ punters. 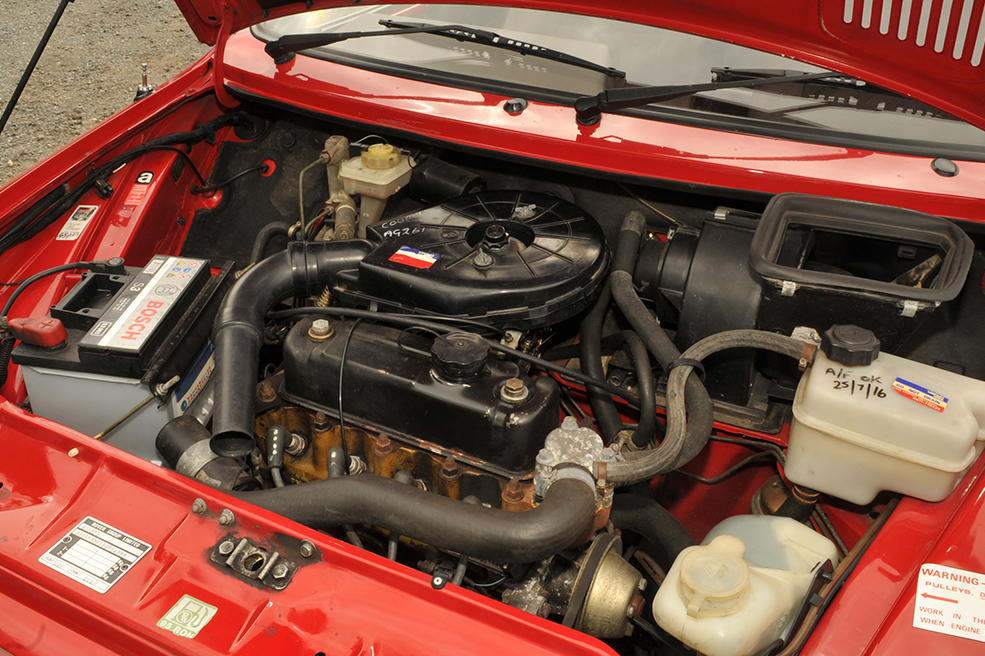 With BL (by now renamed Austin Rover) cash-strapped as ever, a radical update was out of reach, but as was so often the case with ARG products of this era, a clever update was achieved by making some subtle changes.

Inside, the big news was losing the original Metro’s basic shelf-like dashboard which aped the Mini’s utilitarian layout and much like the Rover SD1 had allowed the same mouldings to be used for left and right-hand drive.

In its place came a single-piece moulding with a more conventional high-set instrument binnacle and modern switchgear, paired with chunky column stalks also found in the Discovery and Rover 800. The interior was further updated with chunky seats which further reinforced the sense of the car moving upmarket despite the somewhat Mini-like driving position persisting.

On the outside, the car lost its original steel girder bumpers in favour of modern plastic items and the detailing was tidied up, with subtle changes and graphics changing its appearance. The facelift also saw the addition of a five-door model – something offered by most of the competition by then – which was cleverly squeezed into the same wheelbase as the three-door. Unfortunately or fortunately depending on your point of view, the proposed three-box saloon was shelved before making production although it remains on view at the British Motor Museum.

Mechanically though, the car remained unchanged, still indentifiable from miles away thanks to that characteristic combination of A-Series exhaust note and drop gear whine: Rover was busy developing the K-Series engine and simply didn’t have the resources to provide the Metro with new running gear just yet.

The facelift bolstered the car’s sales, with the Metro once again shooting to the top of the domestic sales league, but it wasn’t to last as the basic age of the design was increasingly hard to disguise.

Rover Group still lacked the funds to bankroll an all-new state-of-the-art small hatch but what it did have was sufficient resources to engineer was a more heavily revised Metro which would appear in late 1990 in the shape of the Rover Metro – the result of pairing the Metro bodyshell with the radical new K-Series motor and at long last, that fifth gear.

In the meantime, the Metro range was given a reshuffle to keep it competitive until the new car was ready, but in the process it lost its identity. With Rover management wanting to position the brand further upmarket, the Rover badge was removed from the Maestro, Montego and Metro for the UK market, replaced by a similarly-shaped emblem bearing only the model name. 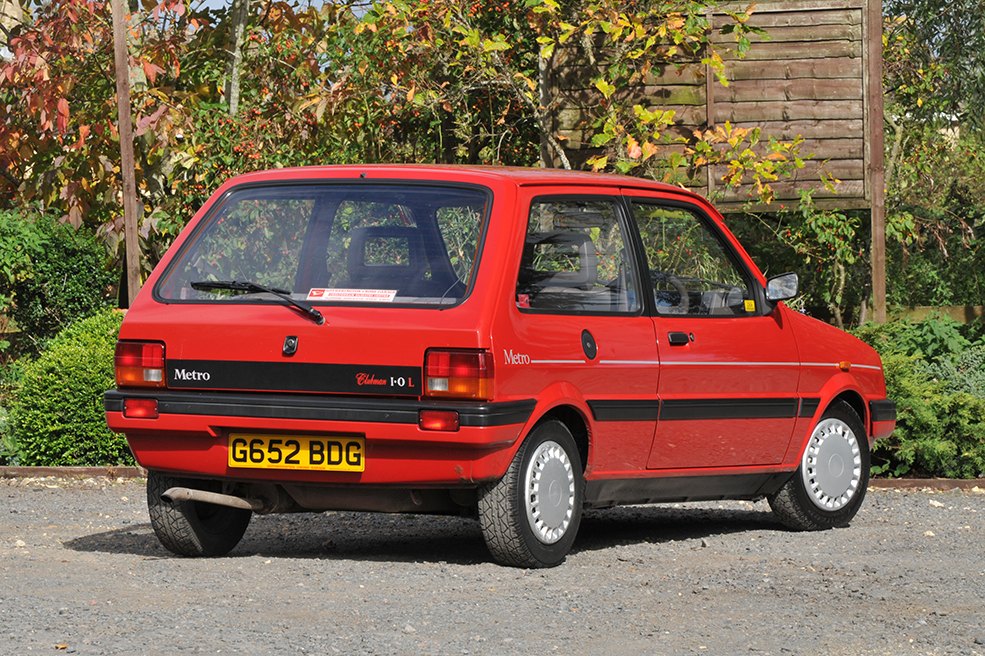 Metro Clubman: on the road

The Metro we have here is a survivor from the era, being the short-lived Clubman model which was produced during 1989 right at the end of the original Metro’s life.

The Clubman spec provided useful extra kit like standard stereo and cassette holder and was offered in 1-litre and 1.3-litre form with the option of either basic or ‘L’ specification in each and it’s the 1.0L we have here.

Sitting in a late model Metro like this it’s obvious how the car’s many good points have been so easily forgotten over the years.

For a start, the light and airy interior thanks to that big glass area combines with the space efficiency offered by the Hydragas to create a car which really feels pretty roomy inside – despite the cabin having to accommodate those big seats it was never intended to house.

With the signature bendy Austin Rover key in hand, the first task is to find the ignition lock which was always positioned oddly low on the column, but a quick twist sees the eager A-Series crack into life. Provided, that is, you’ve remembered to pull the choke. Despite the upgrades which created the A-Plus engine, the Metro persisted with a manual choke and SU carb right until the end of the A-Series model.

The shift action can feel rather rubbery but on the move, the 1-litre Clubman feels surprisingly sprightly. Even in A-Plus guise, the engine is no high-revving screamer but good torque for its size was always an A-Series strength (and something which assured its survival), so good use of the four ratios sees the Metro make good progress. 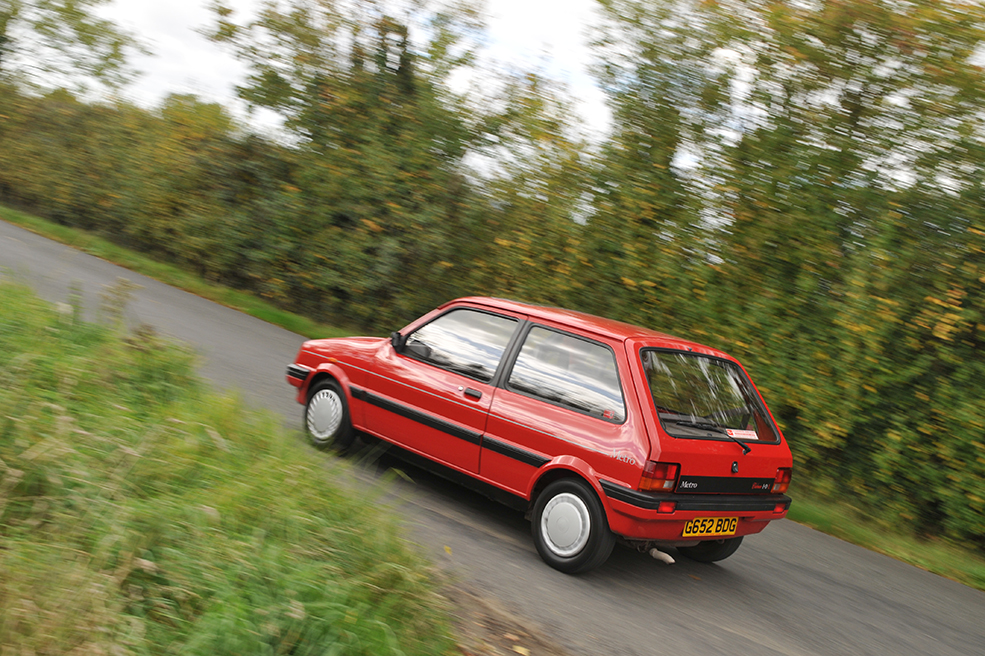 At urban speeds, the lack of a five-speed box is noticeable more from the widely spread ratios rather than the lack of an extra motorway gear, with the Metro sporting a tall first gear compared to newer cars.

Although even a late-model Metro like this one inevitably carries some of the Mini driving experience with it, the big revelation is in the ride which is remarkably civilised. It lacks the bounce of the Mini’s rubber suspension and it’s just a shame that the interconnected Hydragas as found on the later Rover Metro wasn’t introduced sooner.

My own memories of Metros are for the most part old cars run on a budget, usually needing the Hydragas pumping up and to be honest I’d forgotten what they feel like when set up properly – and with just 38,000 miles showing, this example is a good example of how the system was designed to feel before age and neglect took their toll.

It’s only at higher speeds that the age of the basic design starts to become obvious: the wind noise around the doors and mirrors, the drop gear whine and of course the lack of a fifth gear.

But really this is harsh criticism when you consider that the Metro was still considered competitive even when this Clubman rolled out of Longbridge on its way to a customer who had strolled into the showroom of Lex Rover in Cheltenham and ordered it in preference to the Peugeot 205, Mk3 Fiesta or Polo. And whether the Mini outlived it or not, that tells you all you need to know.