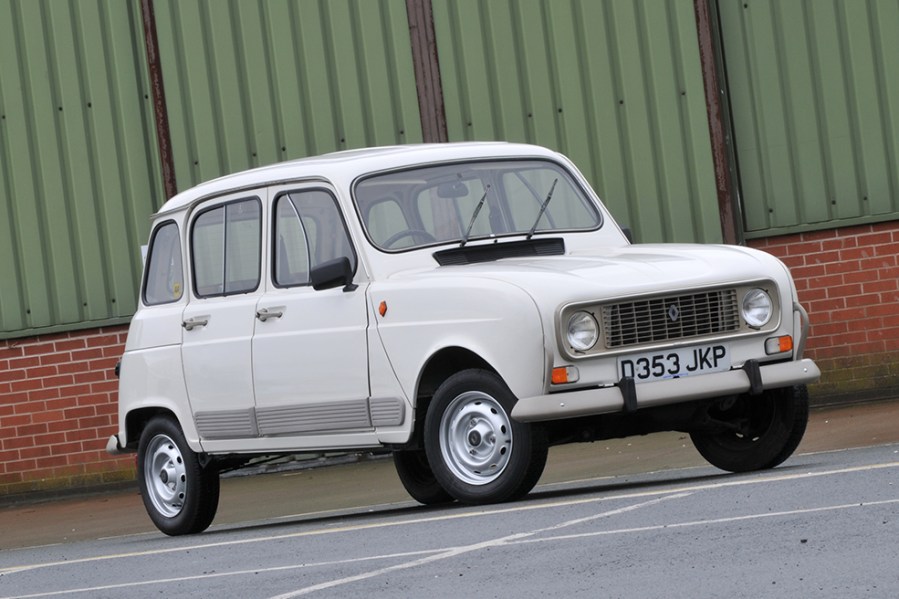 Part of the appeal of this job is naturally the variety but even after three decades writing about old cars for a living, few days offer such an extremes as a Honda NSX and Renault 4.

Having photographed and driven the pair within the space of just a few hours, we were idly contemplating the incongruous sight when it occurred to me that in one sense both cars are really very similar. Namely, in the sheer focus of their engineering and the way in which they were designed to do one job and do it very well.

They also both follow a very minimalist philosophy, at least in the engineering sense: Honda’s high-tech supercar took the fight to Ferrari with two fewer cylinders and rather less bulk, while being as simple to drive and as faultlessly reliable as a basic Civic, while Renault’s Quatrelle did much the same to create an affordable, back-to-basics people’s car which offered more frills than the tuk-tuk style of the 2CV yet stopped short of any kind of luxury.

What’s more, both NSX and R4 amuse from behind the wheel in equal measure. Yes, you might snort at the idea of the 34bhp Renault providing the same thrills as the 170mph Ferrari-slayer but you’ll emerge with just the same grin.

The R4 was Renault’s answer to the 2CV but when development began in 1956 (under the name ‘Project 350’ to reflect the projected selling price of 350,000 Francs) the firm had the benefit of Citroën’s eight years of experience in the economy market and it was this which informed the basics of the design. 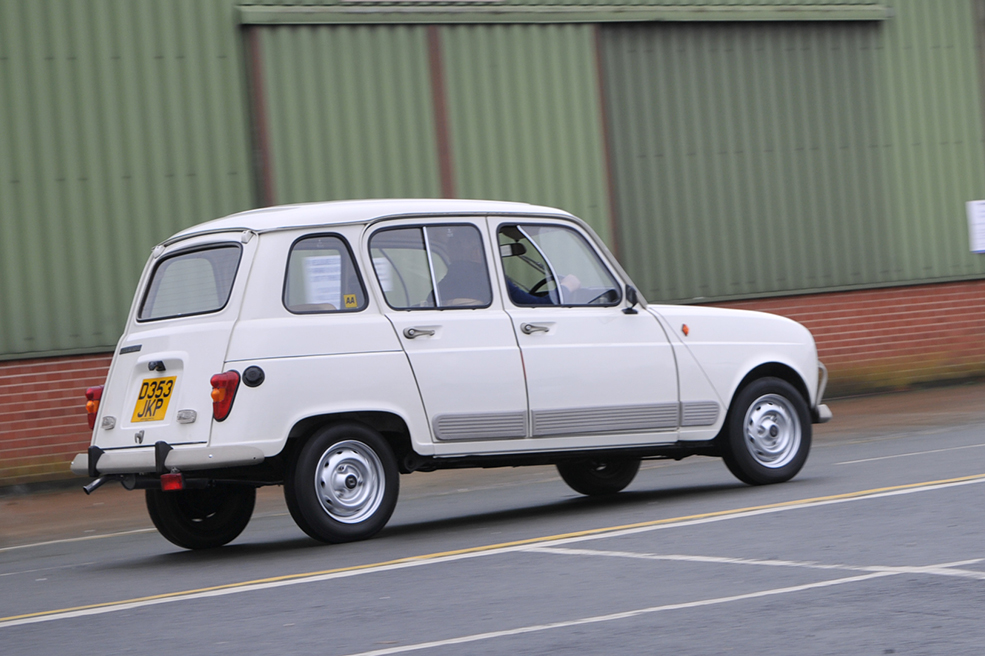 Yes, the 2CV had mobilised a large part of the French population in the austere postwar period but as time wore on, its ultra-utilitarian nature started to become more obvious. Average traffic speeds were rising as Europe gradually rebuilt itself after WW2 and drivers who were once grateful for an alternative to horseback and bicycle were now looking for more creature comforts.

Despite this, it was still a very basic design and like both the 2CV and VW Beetle, it was built on a simple platform-style rolling chassis. Unlike either of these competitors though, it carried a full-width body which immediately offered more elbow room. It also offered a neat trick which neither of the others could offer in the shape of a full-height hatchback rear which at a stroke gave it a massive advantage, especially when coupled with the high roof height.

This was permitted by the adoption of a modern layout which embraced front engine and front-wheel drive – a major departure from its predecessor, the rear-engined 4CV. The 747cc engine was carried over from the 4CV though, with the engine and gearbox assembly effectively rotated through 180 degrees which meant the transmission ended up in front of the engine.

This of course meant that the shift linkage needed to pass around the engine and with a satisfactory cable shift still being many decades in the future, the answer was to route it above the engine and control it from a correspondingly high-mounted shift lever on the dashboard. The mechanism is clearly visible with the bonnet up and is brilliantly simple, using just two major components, while the design also allows for a flat floor inside the cabin. it would also have allowed for a bench seat too, although curiously this feature was never offered.

In very early cars, the linkage would have been pretty busy, since the 24bhp output was coupled with a three-speed design, something which was swiftly remedied a year after launch. 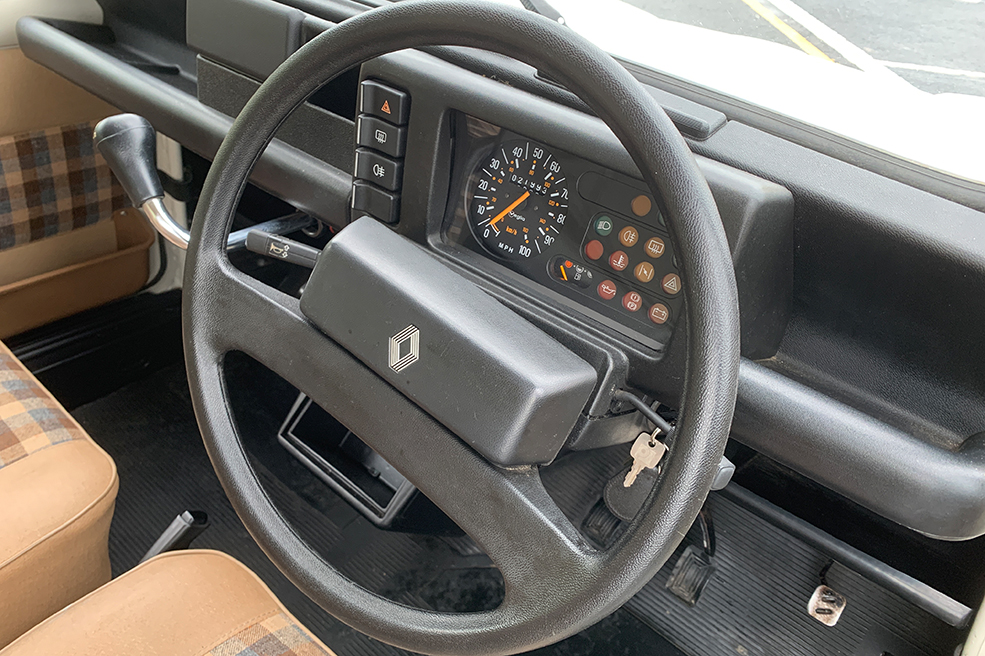 The suspension also contributed to the Mini-rivalling space efficiency, using space-saving torsion bars both front and rear with almost horizontal dampers. The front end mounted the bars longitudinally, but at the rear they were mounted transversely one behind the other, giving rise to one of the R4’s defining features: the wheelbase on the left is shorter than that on the right by the size of the torsion bar. With its long-travel design and independent layout, the design gave the Renault a supple ride which was in most practical effects the equal of the 2CV and offered similar off-road capability but without quite such alarming lean. Unlike the Citroën system which required maintenance of the suspension ‘cans’, the R4’s torsion bars were zero-maintenance.

Launched in 1961, the car was initially offered as an entry-level Renault 3 using the 603cc, 23bhp engine, while the basic Renault 4 used the 747cc unit and a less basic ‘R4L’ model offered side glass in the rear quarters – later made standard – as well as bright metal trim and more comfortable trim.

The R3 proved unpopular and was discontinued a year later, at which point the R4L was offered with the larger 845cc, 28bhp engine from the Renault Dauphine. And that was pretty much that in terms of major development until 1978, when the range-topping GTL model was given the more modern 1108cc engine.

With a heady 34bhp and perhaps more importantly 55lb.ft of torque, it transformed the usability of the car and gave it a much-needed shot in the arm in an era when there was still a sizeable demand for back-to-basics transport. Certainly in the UK market, the R4 from a known Western European brand was often a preferred alternative to the bargain-priced Eastern European models.

In fact, so enduring was its appeal that the car would be produced until 1992, with Renault’s Slovenian and Moroccan outposts turning them out until 1994 by which time production totalled 8,135,424.

By then, sales were dwindling and here in the UK just 34 cars were sold in 1986, with a single one registered in 1987 marking the end of its time with us. They were reasonably popular here – more so than the overtly oddball 2CV, certainly – but were never a huge seller and the utilitarian nature of the car means many were worked into the ground. All of which makes this 21,000-mile example an unusual survivor. 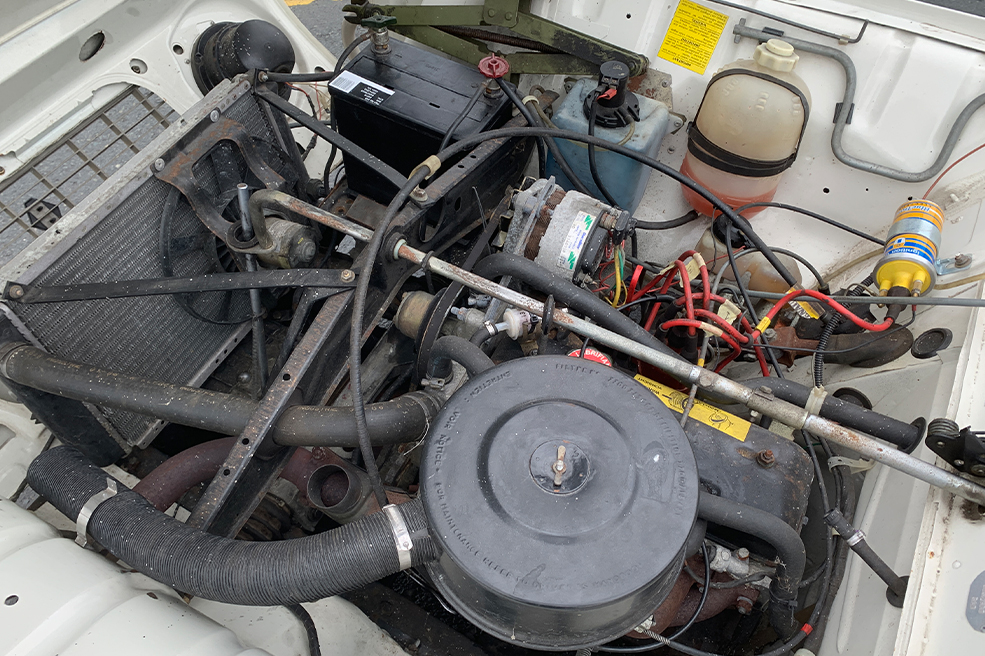 The range-topping GTL badge was a world away from the original cars, offering niceties such as cloth seats and door cards, heated rear window and two-speed wipers but despite that, the purity of the original design shines through: the front door windows are simple sliding items like you find in a Mk1 Mini, while opening the door from inside requires pulling on part of the mechanism through an aperture in the door pressing. Simple, effective and cheap.

With a suitable yank of the manual choke, the 1108cc powerhouse fires easily and proves to be a willing unit, while the dash-mounted shift isn’t anything to be afraid of. Unlike the often awkward column shifts of 50s and 60s cars, the R4’s action replicates a standard H-gate but at elbow hight, making it familiar to anyone who has driven a modern van.

Amazingly, considering just how basic the shift linkage is, the action is both light and precise and enables a committed driver to keep the engine on the boil to achieve impressive cross-country speeds.

The ride is as supple as you’d expect but although the body roll in tight cornering looks extreme through the camera, it’s much less evident than the Citroën and indeed from inside the car doesn’t feel as pronounced. On the open road the R4 feels that little bit more stable than its Citroën rival too, less susceptible to sidewinds and generally happier on dual carriageways and motorways.

If you’re happy without modern infotainment and climate control, the Renault 4 makes a surprisingly engaging way to travel even in 2022 and there’s a simple fun to be had in getting the best from it. It’s the sort of car which always gets an appreciative thumbs-up from strangers and will always get you waved out from a side-turning in rush-hour traffic. It makes a fine alternative to more obvious classic people’s cars like the Citroen 2CV and Volkswagen Beetle, offering a similar blend of spartan practicality, do-it-yourself mechanicals and huge grin-factor. What’s not to like?