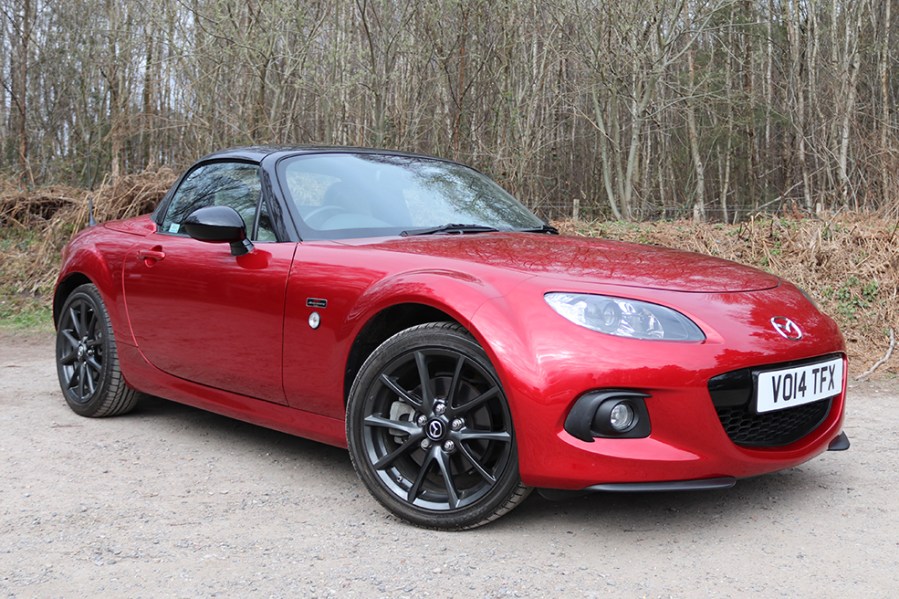 It hasn’t quite reached the modern-classic status of its older brothers but the Mazda MX-5 Mk3 is fast becoming a great-value proposition. We get behind the wheel

Ask any car enthusiast their favourite thing about the Mazda MX-5 and, apart from the reliability advantages over the MGB and Lotus Elan that inspired it, they’ll probably respond with its simplicity; the MX-5 doesn’t have hundreds of horsepower, electronic driver aids or Mercedes-rivalling luxury. It has just enough power to be fun, compact dimensions, minimal weight and enough equipment to get by.

The Mk1 – and similarly, Mk2 – MX-5 is the pure, undistilled essence of sports car. So what happens if you take that winning formula and make it bigger, heavier, more powerful, more complex and considerably more luxurious? You end up with the Mk3 MX-5.

The third-generation car – codenamed ‘NC’ – is often shunned by purists, who say it’s too big, heavy and complicated to be considered worthy of the MX-5 name. But are they right? Should we disregard the Mk3 entirely as a momentary blip before the lighter, smaller Mk4 got things back on track? Or, particularly now values are at an all-time low, could the NC MX-5 be a hidden gem and something of a sports car bargain? We borrowed the stunning 25th Anniversary Edition Mk3 in our pictures from Mazda UK to find out. You might be wondering what place a 2014-plate car has in Classic Car Mart, but consider two things: firstly the NC MX-5 was released in 2005, making it a 16-year-old car in 2021, even if this specific one isn’t. Secondly, the 25th Anniversary Edition gave you all the trimmings: Bilstein dampers, the larger 2.0-litre engine, heated leather seats, satellite navigation and a power-operated folding hardtop roof. So this ‘all-the-bells-and-whistles’ version of the NC is probably the best way to exemplify why the purists don’t like it.

A common complaint with the Mk3 MX-5 is how much bigger it is than its predecessor and indeed, the Moray Callum – brother to a certain Ian Callum of Jaguar fame – design with its flared arches, swollen lights and larger wheels makes it look considerably bigger. But crack out the tape measure and you’ll discover that it’s just two inches longer and 1.6-inches wider. A trifle in real world terms, particularly when you consider the MX-5 wasn’t exactly a massive car to begin with.

What’s more, that slight growth has its advantages – the boot is larger than in the NB and the cabin feels much roomier, with more space between you and your passenger. Also in a slightly larger car, you feel less intimidated on motorways amongst larger vehicles. Think of the NC MX-5, then, as the same small car, just bulked up a bit.

The bulk is the next criticism from purists, complaining about how much heavier the Mk3 is than the Mk2. Indeed, the NC is heavier – it’s a larger car, so it was always going to be. But that weight gain is spec-dependent and if you go for all the trimmings on your NC, the bigger engine, wheels and all the equipment, the biggest weight gain over the NB is 40kg. That’s the same as having a child in the passenger seat or a full tank of fuel; nothing to worry about in a car of any weight, leave alone one that still tips the scales at sub-1,100kg.

Mazda achieved such a trivial weight gain with clever engineering, using something called ‘the gram strategy’, wherein if any one component could be made lighter without compromising its functionality, it would be. This resulted in, amongst other changes, an aluminium bootlid skin (saving 2.5kg), the engine cover and inlet manifold being made of plastic, shaving 3.7kg between them and a thinner, shallower rear-view mirror casing saving a crucial 84g.

Even the power-folding hardtop doesn’t spoil the lightweight, coming in at just 36kg thanks to its polycarbonate construction. Many would argue that weight is worth adding, too – the hardtop makes the MX5 a more refined, quieter car at motorway speeds and during winter months, the extra insulation and weatherproofing make it far more useable. What’s more, apart from some instances of plastic gears stripping teeth on very early cars – an issue that’s easily rectified with stronger replacements – it’s a reliable setup too. Again, the purists might scoff, but I’d go so far as to advise buying an NC with that power roof – the slightly premium you’ll pay over a soft-top car is outweighed by the year-round benefits and the cost of buying a removable hardtop for a ragtop car.

Mostly though, the folding hardtop makes the driving experience that much more grownup feeling and that theme extends to the NC MX5 overall – it’s more comfortable than its predecessors, more refined, you’ll get 37mpg on a run and it even got a four-star Euro NCAP safety rating thanks to its plethora of airbags and impact protection bars. It might not be quite the raw driving experience of sports cars of old, but it’s the kind of car you’d have no qualms about driving daily, or even on a lengthy roadtrip.

That grownup theme continues with the handling of the Mk3 MX5, with Mazda opting to ditch the all-round double-wishbone suspension of the Mk2 for a rear multi-link suspension configuration, borrowed from the RX8. This gives the car a far more supple ride over broken road surfaces, even with the larger wheels fitted to the newer car and the rear end now feels responsive rather than twitchy. Don’t think that makes the NC lazy, though – the steering is quick without being nervous and gives you plenty of feel. Get into it on a winding road and it still feels compact, eager and nimble, exactly like an MX5 should.

Don’t go thinking the bigger engine means it’s an easier car to drive quickly, either – the 2.0 litre engine, the most powerful fitted to an MX5, still only gives you 157bhp and considering slight weight gain over the NB MX5, the power to weight ratio is very similar. You’re still only getting to 60mph in 7.9 seconds and with peak power right up at 7000rpm, you’re still encouraged to rev it out to get the most out of it. Make no mistake, the MX5 still embraces its comparative lack of power and it means you can still have fun without going silly fast. If you drove the Mk3 blindfolded (hypothetically, of course), you’d still know you were in an MX5.

In summary, ignore the purists. The Mk3 MX5 is still a properly enjoyable little sports car, but by embracing just enough modern technology, it evolved into a more refined, safer, more versatile car that could genuinely be your only car, assuming you don’t need back seats. Also consider the fact Mk1 and Mk2 values are soaring up to and over £5000 these days and you can get into an early Mk3 for as little as £2000 – not to mention the NC doesn’t suffer with rust anything like as badly as its forebears and it makes quite the case for itself. Far from being the black sheep, the Mk3 MX5 could well be the pick of the bunch.