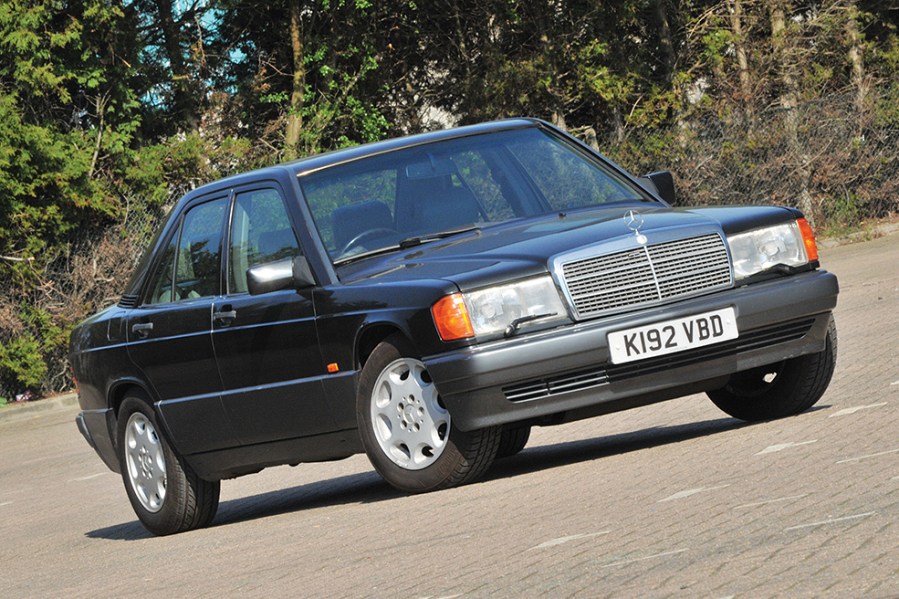 Our Mercedes 190E project did well to prove that the tales of old-school quality are true. Here’s how we got on living with a true modern classic

It’s no secret that certain models from the 1980s and 1990s are in the ascendency when it comes to values and market interest.

This is particularly obvious in the case of the German brands where even 30-year old examples of BMWs and Mercedes are often still spotted in daily use, often piloted by owners who bought them new and simply haven’t replaced them because they haven’t worn out yet.

The knock-on effect is that some cars take longer to achieve accepted classic – or at least, modern classic – status than others and the smallest BMW and Mercedes models are a case in point. BMW’s E30 has long been a cult favourite with values for cars and parts rising correspondingly, yet the Mercedes 190E originally launched as its direct competitor has only recently arrived at the party.

And having run examples of both, I can confirm that there’s a simple reason for that: the BMW may be more robust than the Fords and Vauxhalls it competed against back in the day, but it’s no match for the Benz.

Despite that, prices for the W201 cars remain much more affordable than for the comparable BMW, with even the range-topping six-cylinder 190E 2.6 a much more accessible prospect than the fabled 325i.

How do they compare? To find out, we acquired a 190E 2.6 from the lower end of the market and ran it for two years to find out. 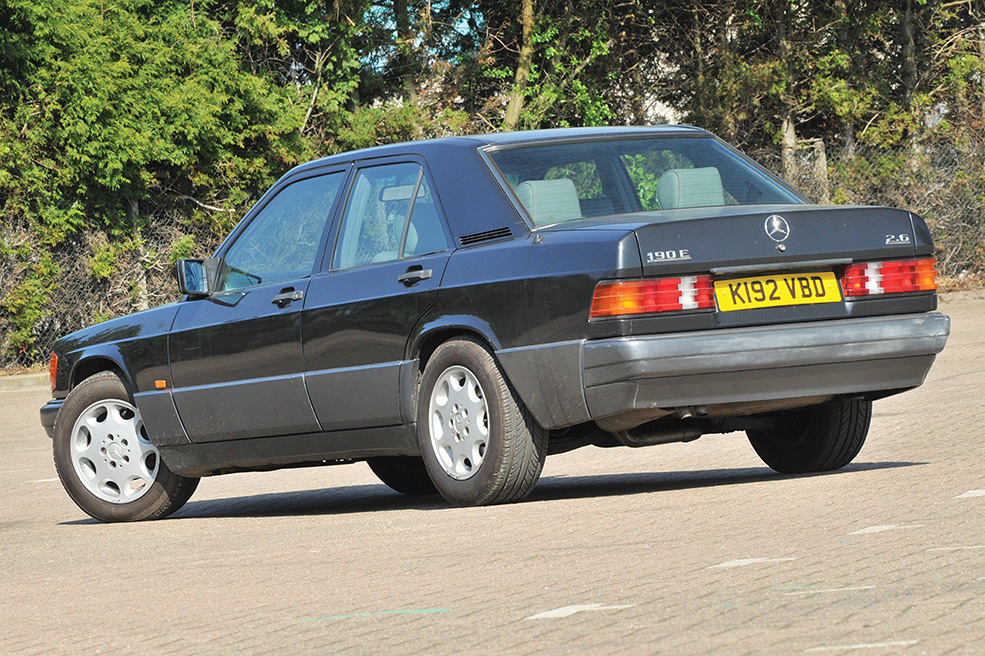 The 190E 2.6 is one of those cars which is valued highly within club and enthusiast circles, yet to those on the outside is just another old car, which means you can get lucky. As indeed we did when we acquired our own example for just £1550.

A mileage of 193,000 would put the average car buyer off but fans of the W201 know better and like most cars of this era, if there’s nothing obviously wrong with the running gear then it’s the bodywork where you need to focus the attention.

Rather usefully, The W210 is a Mercedes of the old school and predates the brand’s quality wobble by at least a decade, meaning that the 190E tends to survive the British roads far better than the equivalent E30. That’s not to say they aren’t without their problem spots though, with ours having received attention to the sills. The work had been done neatly though and the rest of the bodywork was merely dusty but really very presentable.

The darker-coloured bumpers had faded over time, but the rest of the two-tone paintwork was in great condition under the grime and would clean up really well with nothing more than a hand polish. Inside, it was a similar story, with the wooden dashboard trim in good nick and although the perforated grey leather seats were rather uninspiring, they had survived their near-200k odyssey well. Defects were limited to damage rather than wear, with just a nick on the passenger seat facing letting things down – but an easy DIY fix with a repair kit from the likes of Furniture Clinic. 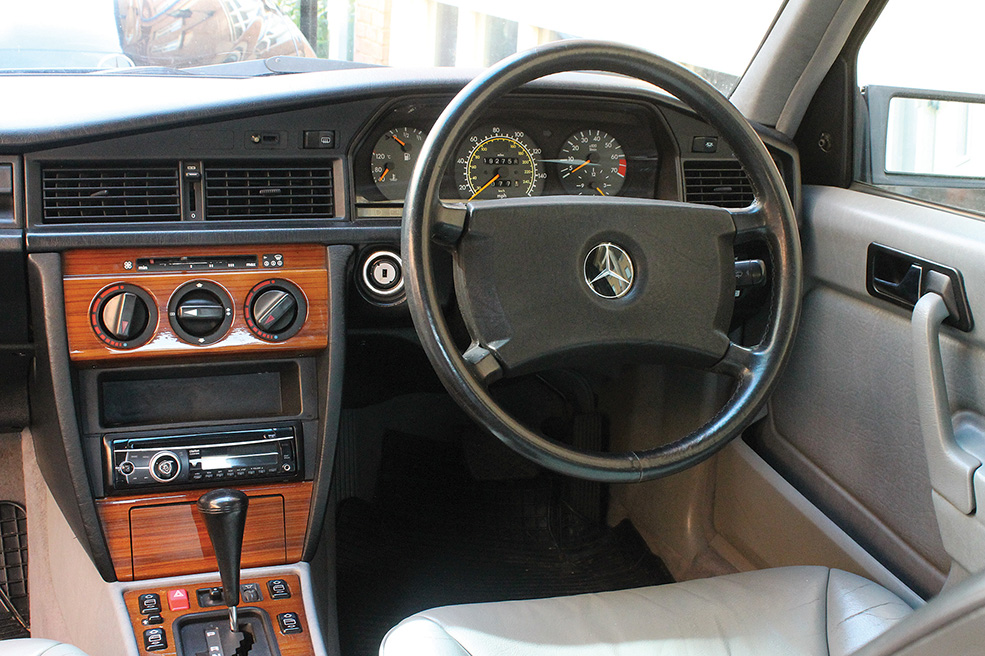 Automatic box is programmed to pull away in second which makes for leisurely progress.

It seemed like we’d lucked out with a car which needed only minor tidying to turn into something really nice, but on the short journey back to our offices, disaster appeared to strike when the temperature gauge headed into the red and we resorted to nursing the car off the busy A14 and temporarily abandoning it at a colleague’s home.

Had we been foolish to follow our own advice to concentrate on the bodywork and assume the mechanicals were bomb-proof? Yes… and no. The car had been standing for some time closer inspection revealed that it had been perilously low on coolant, the subsequent overheating meaning the remaining water had boiled away.

Fearing the worst, we refilled the system and hoped for the best. Had we killed the head gasket, warped the head or worse? Thankfully not, as it turned out. The car ran nice and cool and a proper test drive revealed no issues in the cooling system, so we were happy to blame it on user error and move on.

As we pressed the 190E into daily use on our fleet though, we felt it still wasn’t quite happy, with a noticeable stuttering in the power delivery and a rattle from the top of the engine which was difficult to pin down. Perseverance paid off, however: the problem was eventually traced to a severely worn distributor cap and rotor arm. Yup, it always pays to go back to basics and with a new set of plugs, leads, cap and rotor arm the car was driving smoothly. 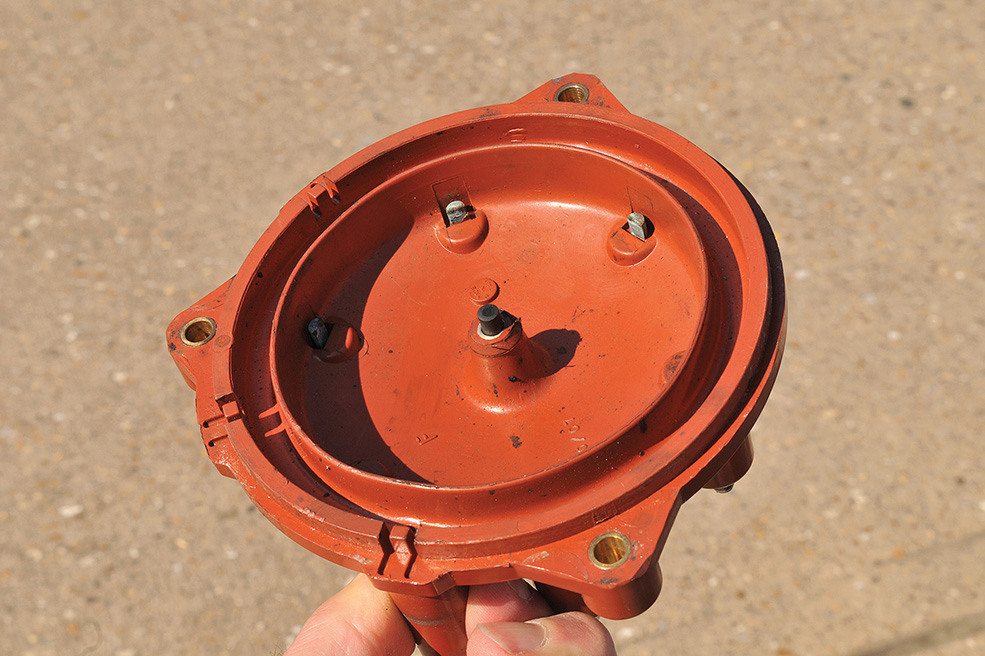 Poor running was traced to a severely worn rotor arm and cap.

One other problem remained, which was the heater – or rather, the control for the blower motor. The fan would run only sometimes and then only in the high speed setting which suggested the control switch rather than the fan itself was at fault. Since this is far easier to access and swap, it was good news.

It’s a common failure on the 190E and indeed on many cars of this age, as the heater fan switch is in fact a big resistor, the control knob simply varying the current fed to the fan motor. They do get hot in operation and over time will fail, with the Mercedes design suffering when the plastic body of the unit swells and splits.

Buying the part was an education in itself, since experience with old cars meant we initially looked for an aftermarket part which didn’t seem to exist, while good used items were scarce and pricey. At which point I had a brainwave and called the local Mercedes dealer. Yes, they could supply the part and at £35 cheaper than the used ones on eBay, but the parts man was very sorry it wouldn’t arrive for a couple of days and would that be OK? It certainly would and underlined Mercedes’ tremendous parts support for its older cars.

Fitting the part involved dismantling a fair bit of the centre console but it’s all straightforward and being a German car it all went back together again without a pile of broken plastic clips. During the job we also found the missing control knob which had obviously been wrenched off the shaft by a previous owner desperately trying to force the fan into life. 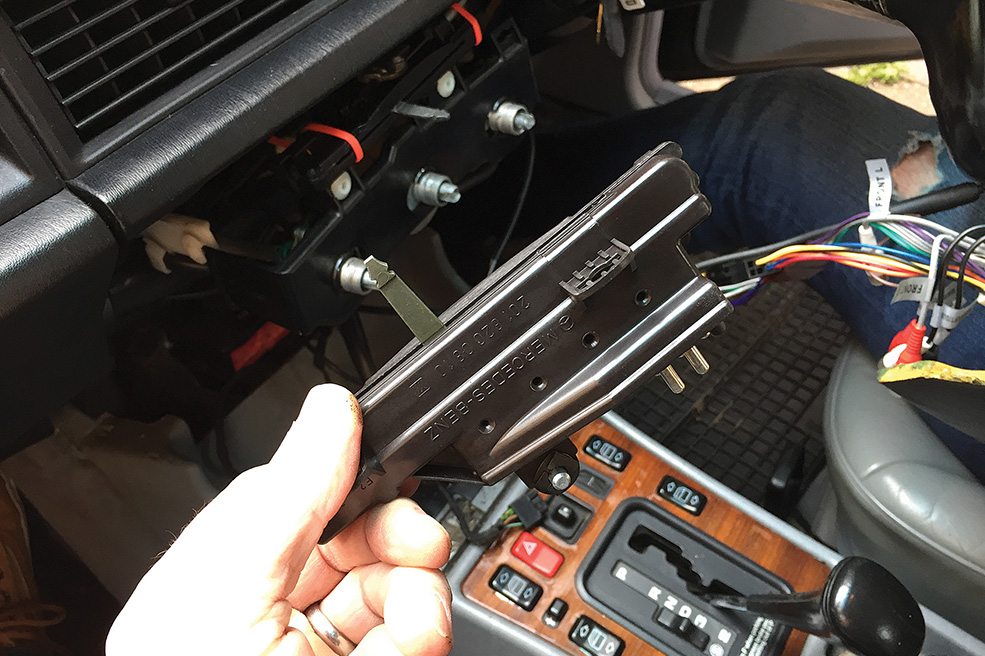 The switch itself was a simple fix. The old unit had split apart and was held together with zip ties.

With the heater fan operational, we were able to use the car safely in winter weather with the demister working properly and the occupants comfortably warm, but when the clocks changed, it threw up another problem: it was impossible to see the instruments at night.

The obvious thing to blame at this point would be the bulbs, but would all of them fail at once? A wiring fault seemed more likely, but researching the subject shed light on the cause in the shape of another resistor. The instrument lighting is adjusted by turning the trip reset button and just like the heater fan control, these tend to corrode internally over time and fail. Sure enough, wiggling the control knob furiously would bring the illumination to life but only ever temporarily and never at full brightness.

With one staffer admitting to using an iPhone speedometer app at night just to avoid a speeding ticket, we really needed to sort this and the instruments are in fact easy to remove on the 190E. Amazingly, the unit is effectively simply wedged in place and with the outside fresh air vent removed, the speedo cable can be disconnected and the unit wiggled forwards with the aid of some bent wire.

With the unit out of the car, replacing the resistor looked like a soldering job best left to an expert but this was rather academic since the part isn’t available separately in any case. Not to worry though, as there’s a much simpler solution: a length of wire can be soldered in place to bridge the resistor entirely. The result was ideal since by the standards of the big displays in modern cars the 190E’s illumination is pretty modest. 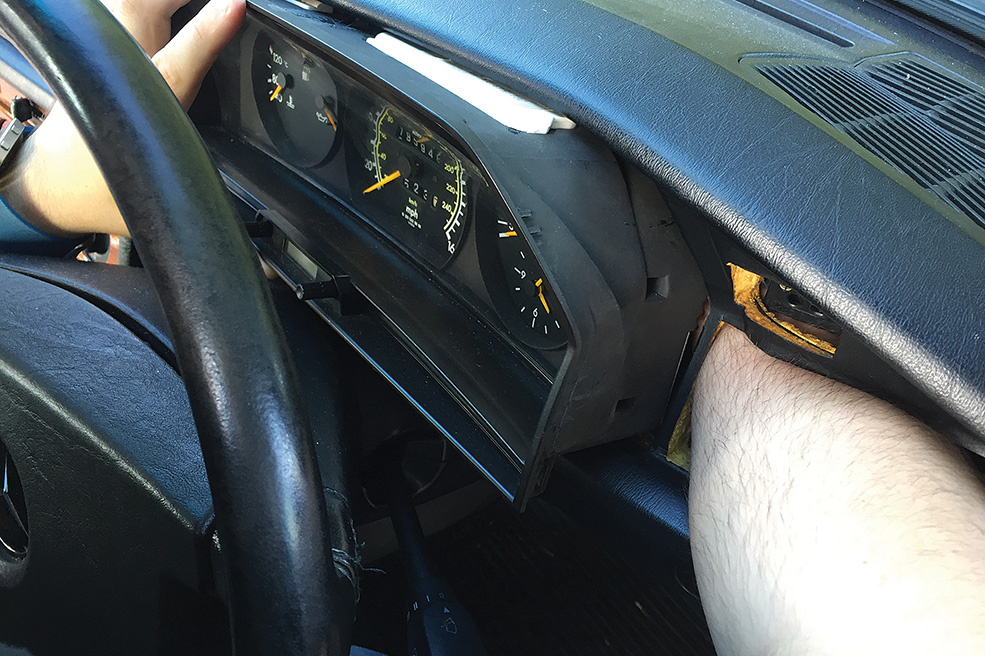 The instrument mod is easily removed.

A more involved job was the sudden lack of performance caused by a cracked downpipe, something which can only really be blamed on age… and a missing exhaust doughnut which allowed the system to flex excessively. Again though, it wasn’t expensive as parts were easily obtained and the local garage had the job done for us the same day.

Other jobs on our Mercedes 190E project were of the ‘keep an eye on’ kind: a slight oil leak from the rear of the engine, the beginnings of a leak from the front dampers and a slight seep of coolant from the heater matrix when the car had been left unused for a while.

And that, believe it or not, has been the sum of the repairs needed to our near-200,000-mile bargain basement Benz. Everybody who drove the car reflected on its quiet quality and in an office straw poll asking which car you’d be happy to drive to Aberdeen at a moment’s notice, the Mercedes was first choice for most. 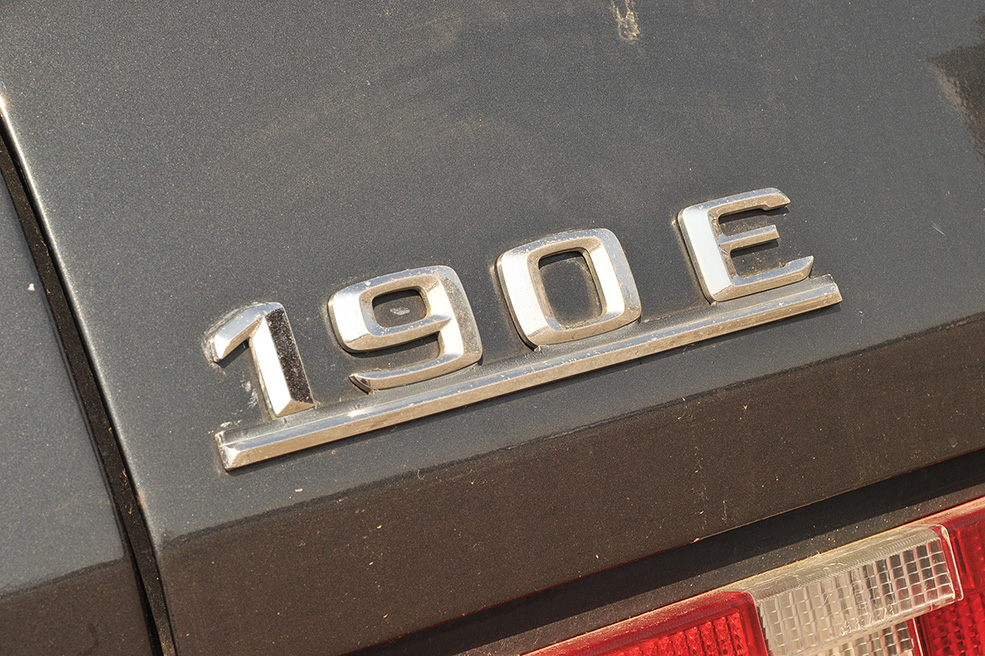 As an enjoyable, practical and  cheap-to-own modern classic the 190E fits the bill nicely. The six-cylinder 2.6 offers a touch of refinement and pace lacking in the somewhat pedestrian four-cylinder model.

We sold the our Mercedes 190E project car to a private buyer who had owned 190Es in the past and hankered after another to park next to his cherished Porsche 911. A week after taking it off our hands, he emailed me a photo of the car gleaming after a machine polish and sitting on a set of AMG monobloc alloys.

The 2.0-litre cars are brisk rather than fast, with the 1.8 best avoided by the keen driver and the 2.6 a definite range-topper. Despite the Mercedes being aimed squarely at the BMW 3 Series, it’s interesting to see how the two cars were marketed differently here in the UK, with the BMW positioned behind that ‘Ultimate Driving Machine’ slogan while the Mercedes was very much the quiet classy junior executive.

In the UK market, the 190E 2.6 was sold in greater quantity as an automatic, in which guise it’s definitely no drag racer. Rather curiously, the gearbox is programmed to start from rest in second gear unless first is manually selected which really blunts its acceleration from a standstill. A heavy right foot will force it to downshift to first soon after moving away but this makes for jerky progress and a better solution is a popular mod to the valve block forcing it to start in first.

Once rolling, our Mercedes 190E project car felt more like the brisk sports saloon it should be and at speed the M103 definitely feels more muscular than the somewhat breathless 325i. Drivers new to Mercedes of this era need time to adjust to the long throttle pedal travel which can make the car feel sluggish but does allow smooth progress in traffic. Regardless of whether your 190E is a two or three-pedal version, its composure on a twisty road is impressive for a rear-drive car with its roots in the late ’70s.

Like the BMW it benefits from quality tyres but is less twitchy in the wet and generally easier to drive hard, helped by the standard fitment for the UK market of the ‘ASC’ electronic locking differential.

In short, it’s a marvellous way to cover distance, even at 30 years old.