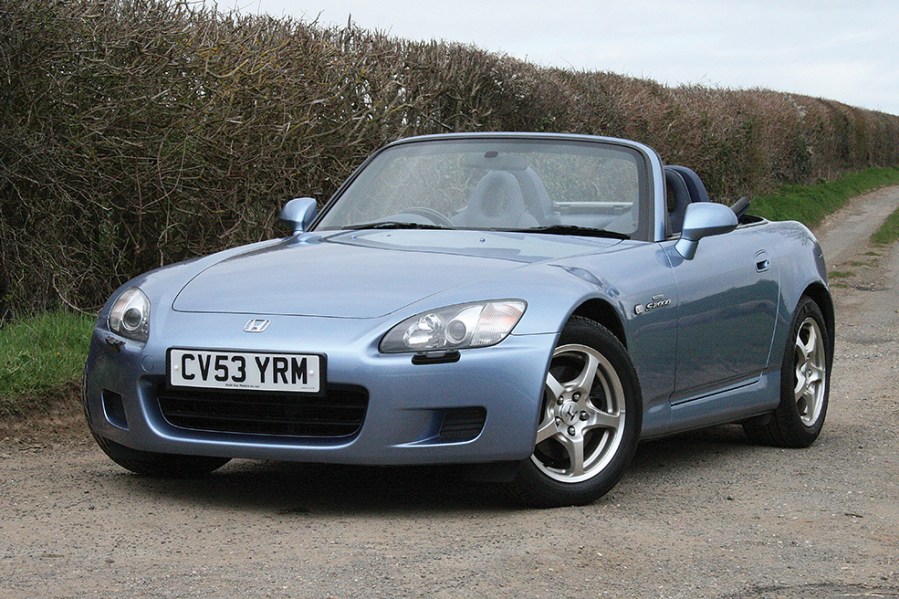 The Honda S2000 was a technological tour de force – but what’s it like to live with as it ages? You might be surprised

It’s become the accepted version of automotive history that the 1990s roadster resurgence was kick-started by Mazda’s MX-5, which then saw all the major makers scrambling to produce their own modern sports car – from Fiat Barchetta and Toyota MR2 to Porsche Boxster and Mercedes-Benz SLK. Honda was there too, releasing its own roadster in 1999 – but always the maverick among the Japanese makers, it took a very different approach.

Instead of the MX-5’s mildly stimulating performance, the S2000 dialled it up to 11 with a VTEC-equipped engine revving like a sports bike.

The styling was as sharp and modern as the running gear, too, without so much as a nod to retro, and the S2000 served as a very appropriate present to itself on Honda’s 50th anniversary.

The heart of the Honda S2000 was the engine: a 2.0-litre twin-cam four-cylinder into which the firm threw the sum total of its accumulated knowledge over its half-century of existence, with many of the design team taken from the F1 engine programme. The result was a power output of 240bhp which was achieved without forced induction but by adding the firm’s trick VTEC variable cam timing and letting it spin to a heady 9000rpm.

You could be forgiven for expecting the result to be a lumpy, awkward unit to drive but in reality it was as docile in everyday use as a basic Honda Civic, and was also able to meet the strict California emissions regulations.

Keep your foot in it until the needle hit 6500rpm and the change in character was startling as the VTEC did its thing and the needle leapt to the 9000rpm redline. At this point, the short-shifting six-speed box came into its own and the grip afforded by the double wishbone chassis was much appreciated. 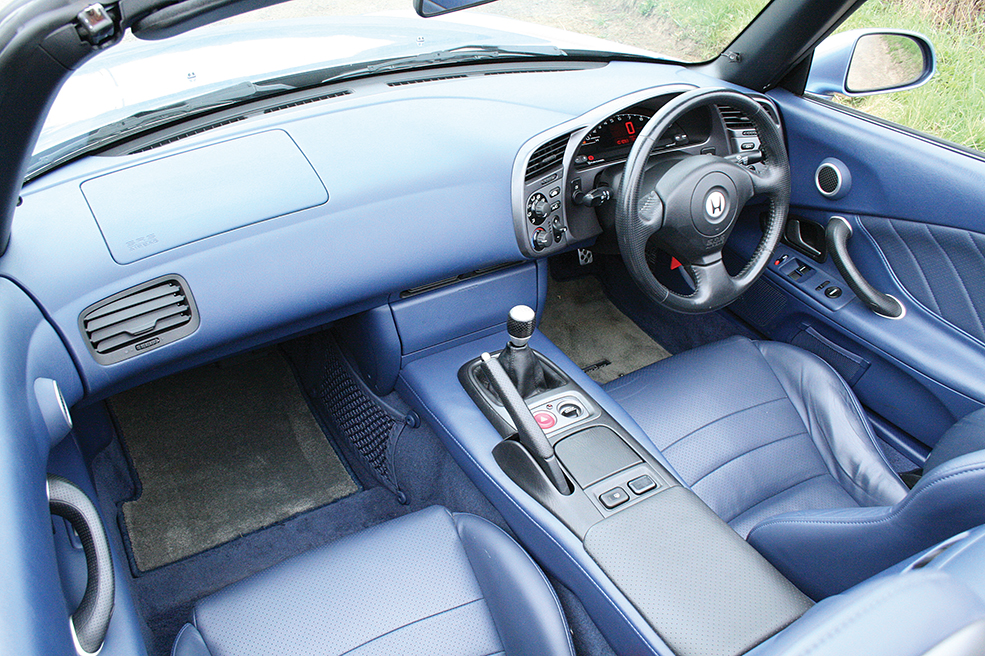 The body was designed to achieve class-leading rigidity, but the S2000 also weighed in at just 1260kg, meaning performance was lively: 0-62 mph in just 6.2 seconds and a top speed of 150mph. Not bad going from a 2.0-litre four-pot.

All of which means there’s nothing quite like the Honda S2000. Yes, there are open two-seaters which provide similar performance, but none of them manage it with such elegance of engineering and without using either much larger engines or at least one turbo. For that reason alone, it deserves the status of modern classic.

The S2000 was offered in UK-market form as just a single 240bhp model. Standard spec was generous, including an electric roof, leather seats, HID lights and air conditioning. For the 2002 model year, the car received revised spring and damper settings to make it less twitchy, a heated glass rear window in the convertible top and minor cosmetic details: a new leather and alloy gearknob, silver stereo cover, darker alloy wheels, chrome rings around the tail lights and larger Honda badges.

In 2004 the car received more major modifications, among them more significant suspension changes Including a softer rear end, revised bumper design and 17-inch wheels, while the VTEC ‘switchover’ was made smoother, with many owners reporting that these revised engines use less oil.

A welcome change for the 2006 model year was the change to a drive-by-wire throttle instead of a mechanical cable, which permitted the option of traction control. Many owners pushing too hard in the wet had discovered just how easy it was to spin a rear-drive car like the S2000 and this saved many from embarrassing spins. You can recognise these cars at a glance by the lack of a hole in the centre of the headrests.

The final change came with the 2008 model year, which introduced traction control as a standard feature and brought more changes to spring and dampers as well as different alloy wheels with a wider spoke design. Production of the S2000 finally ended in 2009 after more than 110,000 had been sold.

Today, the youngest S2000 is over a decade old, while the oldest will have seen two decades on our roads, but you’ll rarely see a tatty one, which is credit both to the high quality of the car and the enthusiasm they generate with owners. Much like the Mk1  Mazda MX-5, the cars have got to the point now where the Fast & Furious modified cars have fallen by the wayside and a clean standard car is now a sought-after thing.

Here at Kelsey Media, we’ve had an S2000 on the scene for the last eight years but rather than a magazine project car it’s the personal property of publishing boss Phil Weeden. The fact that he’s held on to the car through successive house moves and a growing family tells you all you need to know about the appeal of these cars.

“I’ve always liked something a bit left-field,” admits Phil, and that explains why it was the S2000 which took his fancy rather than a Boxster, SLK or MX-5 at similar money – which at the time was £5500 from an independent dealer.

A 2003 car, it comes with the benefit of the glass rear window but predates the larger wheels and suspension revisions introduced the following year. Phil recalls that the car was originally offered with a hardtop for an extra £500, an offer he now regrets not taking up. One of the few criticisms he makes of the car over his ownership is that the convertible top is a basic single-skinned item and so is easily damaged, as well as making the car a chilly prospect for regular winter use.

The hardtop makes the car a much more useable year-round proposition, he reckons, and of course the scarce used ones on the market now go for more than the £500 the dealer was originally asking.

During eight years and 35,000 miles of ownership, the S2000 has lived up to Honda’s reputation for quality and expenditure on parts has been minimal, while the paint and interior trim still look great. A period of little use resulted in the seized rear callipers recently needing replacement, while the rear dampers were replaced a couple of years ago by Koni parts.

Interestingly, Phil reports that the Konis are very slightly softer than the originals and as such mirror the 2004 suspension changes, making the car easier to drive hard – without the brittle ride, it’s less easily unsettled especially in the wet.

On the subject of which, most Honda S2000 owners will agree that the right tyres are crucial on these cars and Phil agrees. “It had Uniroyals on it when I got it, which were awful,” he recalls. “I changed them for a set of Bridgestones and they transformed it.” 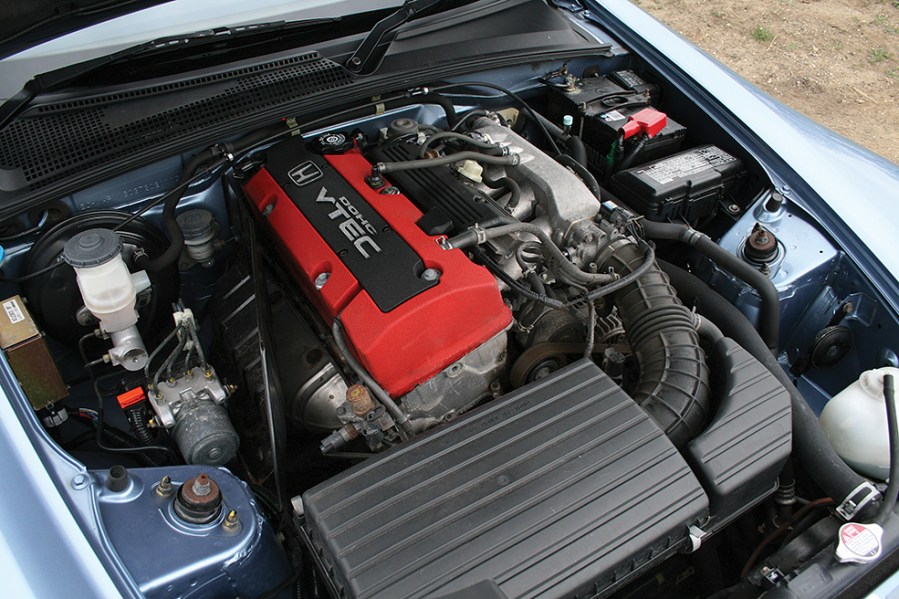 Other issues over the years have been of the niggling variety rather than major issues: a sticking bonnet catch and a lazy driver’s door lock are about the only things that spring to mind, which isn’t bad for a specialist performance car like this.

As for servicing, it’s no secret that a car like the Honda S2000 needs proper maintenance by someone who knows what they’re doing, especially when it comes to the three-year valve clearance service.

Initially Phil used the local Honda main dealer and was pleasantly surprised at the cost and levels of service, appreciating their sensible advice when expensive items were looming on the horizon.

The car was later looked after by a more general local garage which saw a few Honda S2000s, with the most recent service being performed by Honda specialist TGM Sport in Hampshire. The ‘big’ service included the valve clearances and rear differential fluid, and came in at about the cost of an interim service for something like a Porsche Boxster – the car’s natural competitor as a modern classic – which makes the S2000 look reasonable.

Throw in the cost of new tyres and having all four wheels refurbished and the total bill was still only £1300.

As for the practicalities, the Honda’s boot space is certainly on a par with the MX-5 or Boxster, and the car’s certainly up to long distances.

It’s at its best on cross-country B-roads though, since long motorway journeys can get tiring with the din noise from the roof. What was that about hard tops again?