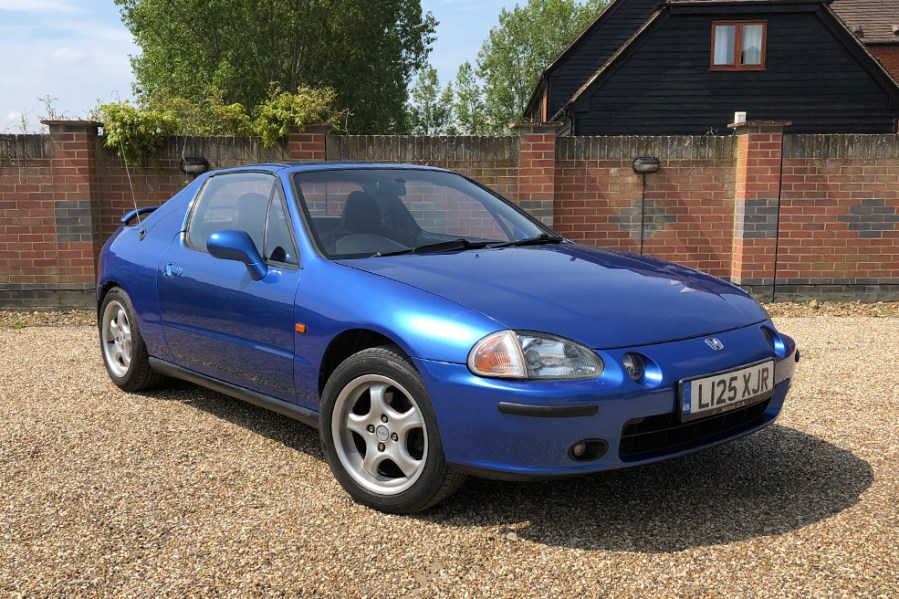 90s Japanese sports cars are enjoying a renaissance at the moment, with even the weirdest examples gaining attention from enthusiasts. Our Honda Del Sol was one such oddity

We may be living in a period of almost unprecedented change in the automotive market, but it’s easy to forget that similar levels of technical upheaval happened back in the 1980s. The last MGB may have left Abingdon in 1980 but its end was inevitable in the face of the sheer practicality offered by the new generation of performance hatchbacks. Ultimately, the likes of the MGB GT were eclipsed by the talents of the Golf GTI and Escort XR3i to the point where its demise was inevitable.

In focussing on the likes of the Golf and Escort though, it’s easy to forget that there was another new wave of cars coming along at the same time which made the Europeans look positively conventional.

Enter the likes of the Toyota MR2 and Honda CRX, diminutive pocket rockets packed with technology which promised both bulletproof reliability and a very different way of doing things which was at odds with the rather staid offerings of the rest of their makers’ ranges.

The story of the CRX began as early as 1984, the car essentially a coupe version of the Civic but Honda being Honda of course it couldn’t be quite that simple. The Civic platform was shortened by five inches and the sleek coupe bodyshell sat two inches lower. It was powered by a 1588cc version of the alloy Civic engine with Honda’s own PGM-Fi injection and a novel (for 1984) 12-valve head featuring two intake and one exhaust valves per cylinder, it was good for 100 bhp at 5750 rpm and with an 800kg kerb weight it created a brisk car which felt much quicker: road testers back in 1984 were surprised to find it took just over 9 seconds to crack the 60 mph sprint but in 1985 the little coupe gained a 1590cc 16-valve engine good for 125 bhp, in which form performance was improved: a top speed of 124 mph and 0-60 in just 8.3 seconds.

The original CRX was replaced in 1988 with a car which at a glance looked similar and was again a coupe based on the Civic hatchback but which under the skin was much changed. Gone was the coil-over and torsion bar front suspension and beam rear axle in favour of a fully independent set-up using wishbones at all four corners. The new suspension also allowed the designers to lower the bonnet line by 30mm.

UK-market cars retained the 1.6-16-valve engine initially but in 1989 Honda dropped in its famed VTEC technology and made a good thing even better. The acronym stands for Variable Valve Timing and Lift Electronic Control and as the name suggests it alters the timing and lift of the camshafts, effectively offering two camshaft profiles to allow both good torque at lower speeds and good power at higher engine speeds. And by higher engine speeds, Honda meant over 8000 rpm, an impressive achievement from a four-cylinder production engine and something which showcased its engineering talents, easily the equal of the established giants like BMW.

The regular 1.6i-16 offered GTI-rivalling performance and the VTEC was in RS Turbo territory, but the CRX’s tiny dimensions ensured it was forever something of a niche product in the UK market. Yes, it offered seating for four, but so token was the rear bench that Honda acknowledged its occasional nature by providing just a flat vinyl-trimmed bench and a pair of belts.

With the third generation of CRX launched in 1992, Honda gave up the rear seats entirely and the car became a two-seater. This allowed the space to accommodate a novel targa roof and opening rear window, the car going by the name Del Sol and some clever engineering allowed for an electric operation of the roof. Given the name TransTop, the system opened the boot lid vertically, before extending a pair of arms to grab and slide the targa panel into the boot all at the press of a button, but the system is heavy and many prefer the manual version.

As before the car was offered with a choice of engines including the 1.6-litre 16-valve badged as ESi and the VTEC-equipped version with the VTi badge. In VTi trim the car was still quick, but the weight gains blunted performance and few would argue that the slightly awkward proportions of the targa bodyshell had lost the elegance of the first two generations.

The Del Sol would last until 1998 and the CRX wouldn’t really be replaced until Honda introduced the CR-Z in 2010, which curiously is regarded by many as the successor to the second generation car rather than the Del Sol era.

Among Honda fans, opinion is divided among these two generations of CRX, but here at Classics World we’ve run one of each and discovered that both have their charms. Surprisingly patchy parts support makes them tricky to keep up to scratch, but that famed Honda reliability more than makes up for it and both will make a Mk1 Golf GTI or Peugeot 205 GTI seem rather flat.

We came into CRX Del Sol ownership  as part of a challenge for our YouTube channel. Fellow staffer Joe and I were given £2000 each to buy a 1990s Japanese roadster that wasn’t a Mazda MX-5, and while Joe liberated a pre-existing Toyota MR2 Mk3 from the office car park, I decided to complement our existing CRX with another one. But before I get accused of a lack of imagination, I must reiterate that the CRX Del Sol I went for is a very different beast from the hatchback Mk2. Indeed, in the US there was no reference to the CRX name at all – instead it was called the Civic Del Sol, with the Civic bit later dropped.

There are a bewildering array of different engines and trim levels for different territories, with many Japanese market cars brought over to the UK as grey imports. For Europe though, domestic models were limited to the 1.6-litre ESi with its 125bhp single-cam D-Series VTEC motor, or the 158bhp VTi, which had the technical jewel that is B16 DOHC VTEC under the bonnet. Although I ended up a bit off target with my budgeting, I was shopping firmly in ESi territory – or so I thought. In the end I managed to find an early VTi on Gumtree and managed to persuade the team to take a punt on it at £2400.

For that we got a 1993 car in Captiva Blue with a boot full of spares and the lighter manual targa roof, as opposed to the electric Transtop type. Compromises were inevitable given the price, and while the car seemed very good mechanically, each panel was a slightly different shade of blue to the adjacent one and the rear wheel arches showed evidence of fibreglass repairs.

Nevertheless, it was a delight around town; light steering, a good heater, a stable idle and a temperature gauge that never even hinted at danger. Out on the open road the ride was surprisingly supple and it remained a tidy handler in spite of its spurious rear tyres, but the light steering lacked a little feel when pushing on and it wasn’t quite as engaging as an MX-5 or an earlier CRX. The VTEC engine was initially a little underwhelming too, especially when compared to our very eager MR2. However, everything changed once I got past the mental barrier of treating it mean and revving it hard. That served to knit it all together, and for a 28-year-old, 1.6-litre car with 102,000 miles on the clock, it proved to be very impressive – especially given that it comfortably beat the 30mpg barrier even when thrashed.

Our tenure wasn’t completely trouble-free, however. Early on a leaky VTEC solenoid began to make a mess of the engine bay, but it was easily fixed using readily-available genuine Honda parts. More irritating was a sticky clutch pedal, but the car’s humble Civic origins once again helped here. A new master cylinder cost under £30, and despite some contortion needed to fit it, solved the problem completely. We were also pleased to see that rear arch repair panels could be easily sourced, though ultimately we never got round to fitting any.

Some of the Del Sol-specific parts tend to be harder to find, such as the rear bumper bar and some trim parts like the ashtray, but ours were fine so didn’t need replacing. The roof seals were more troublesome, however. Ours had begun to perish, and though any leaks were slight, replacements are had to come by. Good secondhand sets can command several hundred pounds and we even saw a new set in America priced at $5000! They need to be looked after and regularly treated to keep them supple, so to this end we used Sonax Gummi Pfleger, which seems to have helped no end. The boot would also quickly get damp, but this was down to the drains under the rear sail panel being blocked.

Cometic improvements were limited, but we did get round to was reinstating the missing VTi boot spoiler, which certainly improved appearances. Any further progress would have likely meant getting a bodyshop involved, and we simply ran out of time.

Regardless, the car proved to be reliable during our short tenure and surprisingly practical. The boot was positively cavernous for a two-seater sports car, even with the roof stowed in its clever cradle. By the time it was time to move the car on, we’d really bonded with it and we were very sad to see it go. The Del Sol might not have the lofty reputation of the Mk2, but as a fun, reliable modern classic, it’s well worth considering.