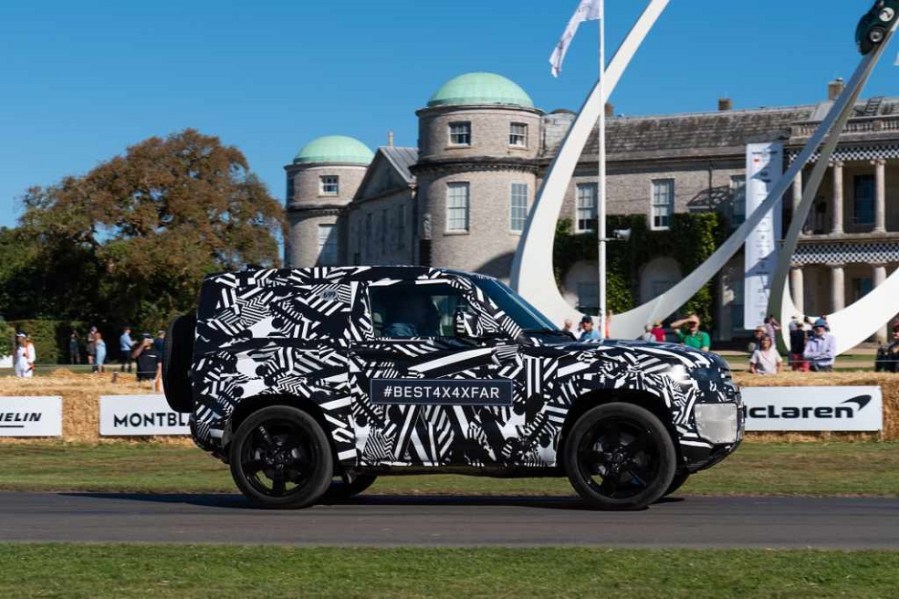 As it crawls ever closer to production, the new Land Rover Defender has been seen in production-ready form for the first time, albeit still heavily camouflaged.

The pre-production car was driven up the hill to formally open the Goodwood Festival of Speed on July 5 with the Duke of Richmond at the wheel and for the first time its general proportions could be seen properly.

Alongside the camouflage graphics, the vehicle’s styling details were heavily disguised but it was obvious to onlookers that its general proportions are similar to the old Defender, with a vertical tailgate although the general appearance is more likely to be that of a shrunken Discovery 4 or updated Freelander.

It’s also reckoned that although the reborn Defender will offer the traditional off-road ability, it will also be happier on-road thanks to the input of JLR’s chassis development legend Mike Cross as Chief Engineer.

It’s claimed that development vehicles have completed 1.2 million kilometres in extreme temperature tests as well as the Nürburgring of all places. The Defender is slated for launch later this year but will be produced not in the traditional Land Rover home of Solihull but at JLR’s Slovakian facility. Both long and short-wheelbase variants are expected, broadly mirroring the old 110 and 90 names, with an extra-long platform dubbed ‘130’ to be added later.

The Defender is thought to use a monocoque chassis – the MLA architecture mentioned above – in place of the original’s body-on-chassis design and you can expect to see a massive range from stripped-out utility models to high-end luxury versions.

Meanwhile, the car pitched as a more appropriate spiritual replacement for the original Defender, Ineos’s Projekt Grenadier has been relatively quiet since announcing former Mercedes subsidiary MBtech as development partner in February 2018 and a powertrain deal with BMW back in March. Despite aiming to launch a vehicle next year, the firm is yet to announce concrete specifications, timetable or production location although Ford’s troubled Bridgend site has been suggested as a possibility.