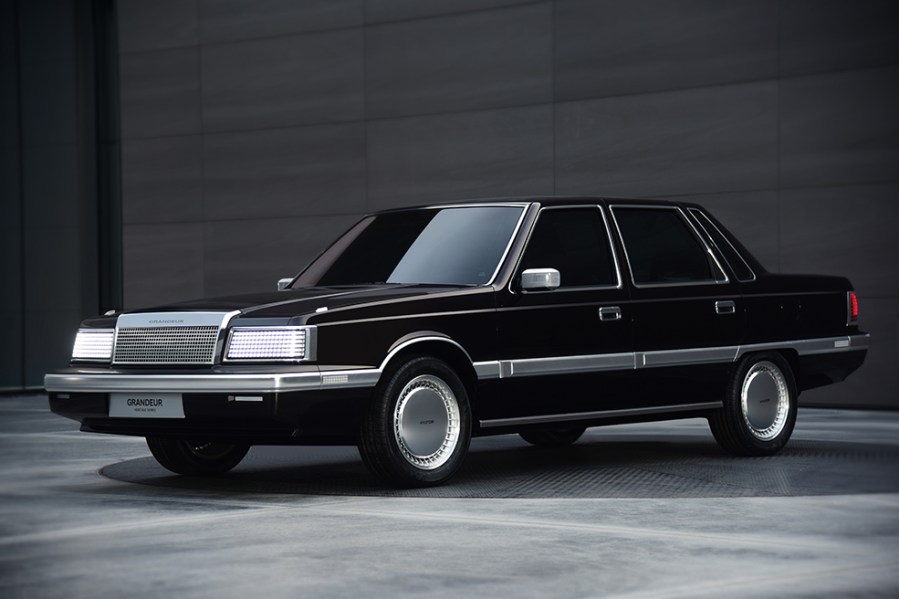 Based on the Mitsubishi Debonair, the Grandeur was launched in 1986 and is still available in a sixth generation, but was never exported to Europe – a far cry from today’s confident brand which is mixing it with the best in current road tests.

Reinforcing the growing South Korean presence in the EV market, the reimagined Hyundai Grandeur swaps out the old Mitsubishi 2-litre for an all-electric drivetrain – much like the firm’s earlier Hyundai Pony restomod. The exterior gains only a light makeover including a chrome grille and LED lighting, the interior is entirely redesigned with a digital dashboard, soundbar and a delightfully random touch, a built-in piano keyboard… which naturally can only be played through the 18-speaker sound system when the jet plane-inspired shifter is in Park. There’s even a secret storage compartment inside the armrest to hide valuable trinkets.

On top of this, the burgundy velvet and nappa leather are simply the icing on the cake, with rear passengers also getting an ‘infinity mirror’ surrounded by LEDs. It’s all a far cry from the early Pony and Lantra we happily poked fun at.

It’s a shame, we reckon, that Hyundai can’t realistically bring such a fantastic throwback to market. It’s doing its best with the latest 80s-tastic Ioniq 5 electric SUV, but even that lacks the charm of its rather charming celebratory restomods.