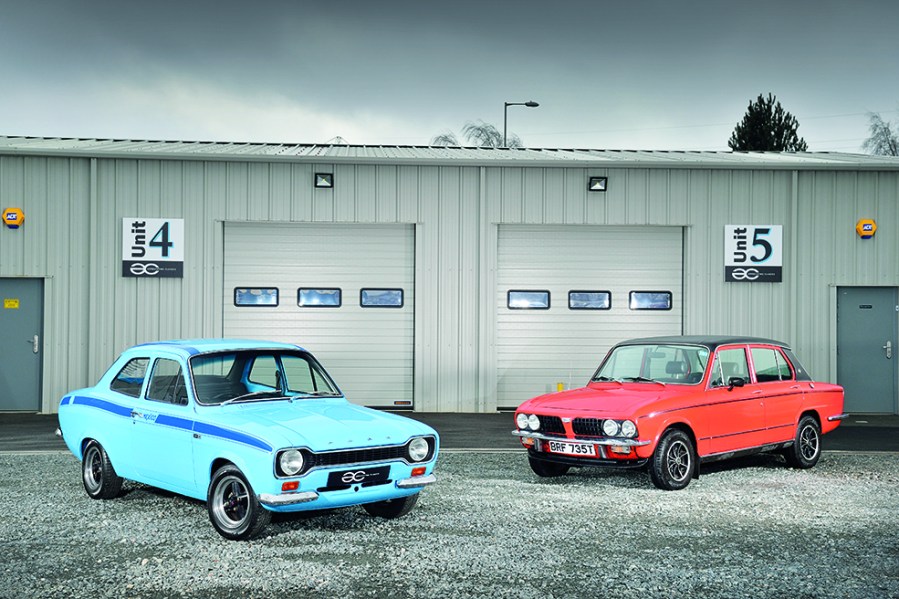 The Escort Mexico and Dolomite Sprint may be poles apart price-wise today but back in the ’70s they were in competition in the showroom. Which gets our vote as a quick classic saloon car?

It was a ploy that worked well. As competition rivalry intensified, pressure to homologate specials in production car race and rally classes led to more high performance models being offered to the car-buying public. Ford UK was right on trend with GT and even Lotus versions of the Cortina but the launch of the Escort in 1967 changed the game, giving their competition department a stiffer lighter bodyshell. Escorts were soon winning rallies and performance versions quickly hit the showrooms. 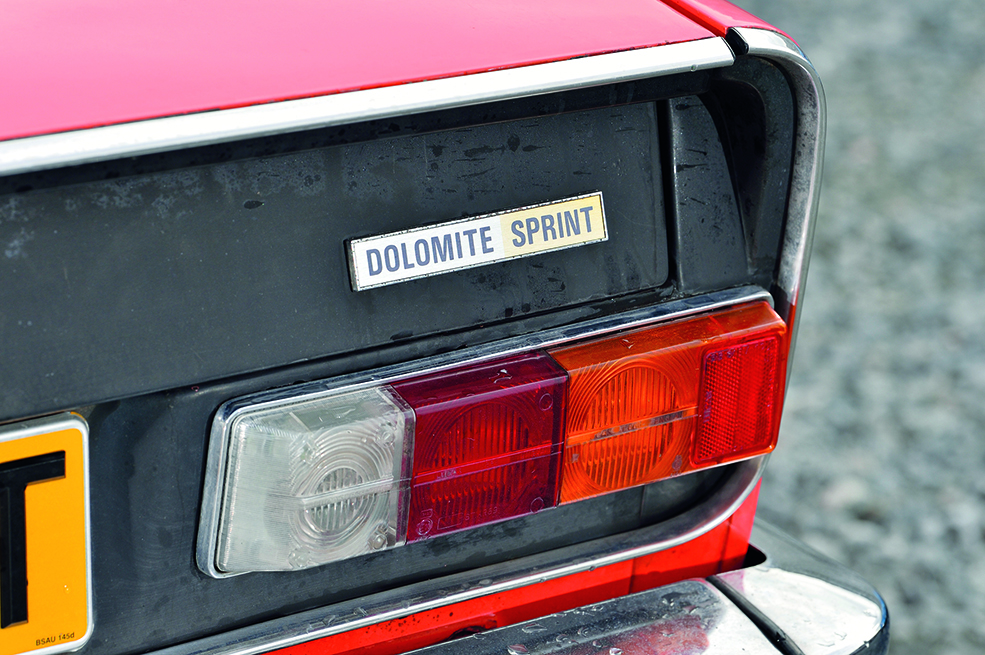 The sporty 1300GT was an excellent car but it was never going to be enough. Ford launched numerous hot Escorts but the one that really caught the British public’s imagination was the 1600cc Escort Mexico, named in honour of their World Cup Rally victory.

Meanwhile in Coventry, Triumph’s reputation was for comfortable cars offering a decent turn of performance. In 1972 their Dolomite mid-sized saloon car was launched. While the 1850cc engine option gave the Dolomite fairly brisk performance, Triumph’s engineers had other ideas. Their resourcefulness achieved a 40% power hike, making the new Dolomite Sprint a very desirable wolf in sheep’s clothing and an exceptionally fast family saloon.

By the early Seventies, Ford and Triumph found themselves vying for sales in the same performance saloon segment, but with products that on paper were quite different. Rivals in the Seventies, how do Ford’s Mexico and Triumph’s Dolomite Sprint compare today? 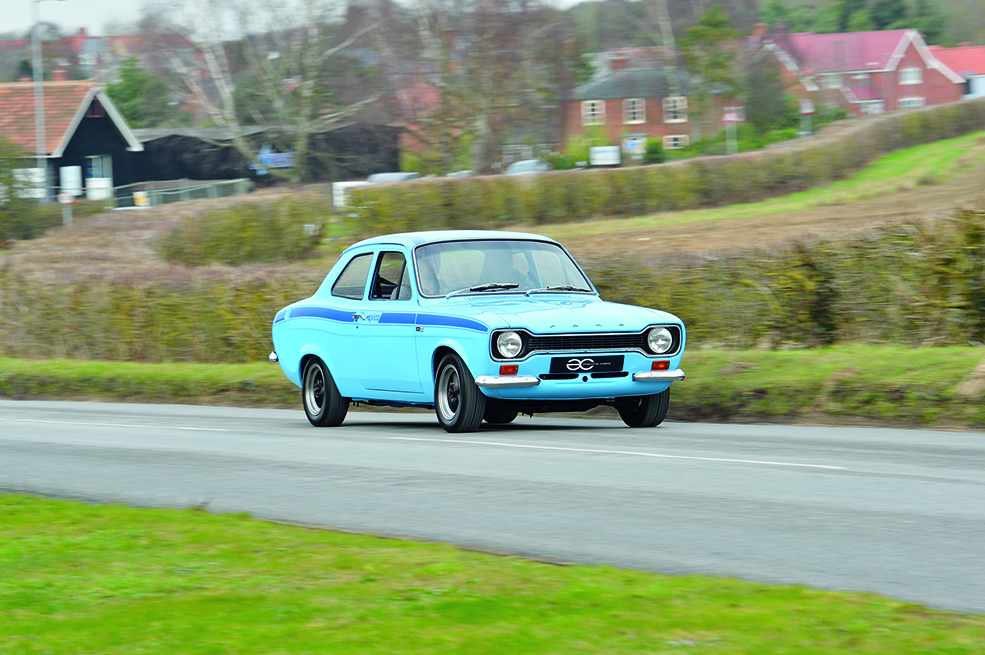 The story of Hannu Mikkola and Gunnar Palm winning the 1970 London to Mexico World Cup Rally in an Escort is well known as the origin of the Mexico name tag. Perhaps less well known is the extended range of performance Escorts available to the public from Ford’s Advanced Vehicle Operations at Aveley. High performance Mk1 Escorts were offered, badged as Twin Cam and as RS1600 in addition to the Mexico, which was confusingly also known as the 1600 GT.

The Twin Cam and the RS1600 were rather more exotic overhead-cam affairs, with power units from Lotus and Cosworth respectively, while the Mexico was powered by a gutsy but conventional 1600cc pushrod Kent engine. The fussier – some would say less reliable – Twin Cam and RS1600 were phased out in 1973 in favour of the RS2000, powered by a Ford-built two litre Pinto engine. In 1974 when the Mk1 Escort became the Mk2, Mexico and RS2000 versions continued to be built in the new, straight-edged body style. 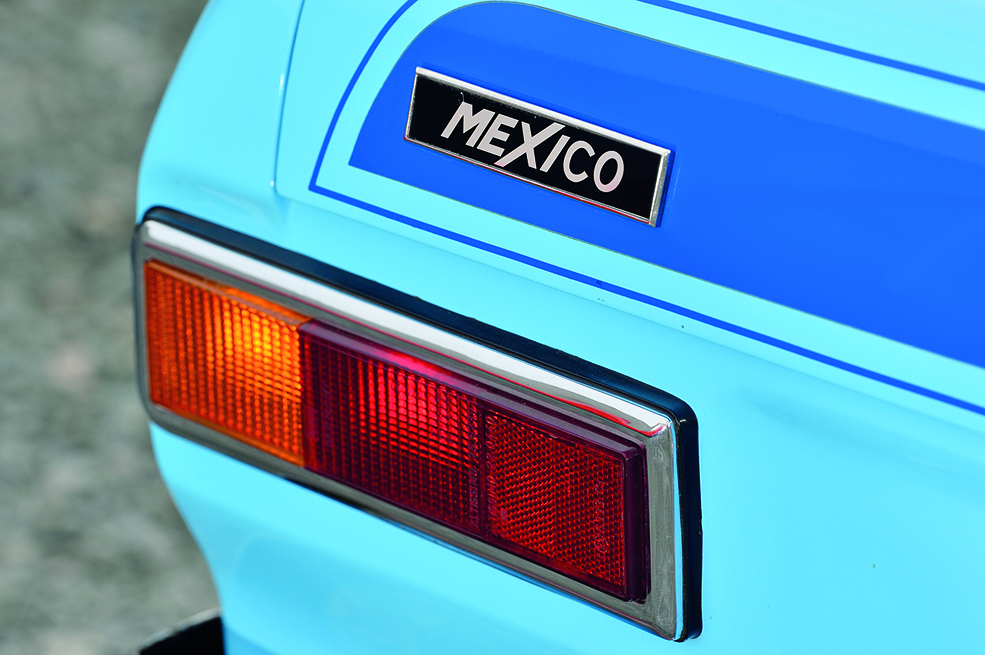 The AVO-prepared Mk1 bodyshells were all similar, based on the two-door version of the basic Escort saloon but with strengthening added in critical areas including suspension mountings and a stone deflector beneath the boot floor. A bit of time spent researching the various models available is valuable before diving in and buying a hot Escort, as the range of performance versions available in the late Sixties and early Seventies was enough to baffle all but the most ardent Ford aficionados.

The Mexico’s specification was sufficiently sporting to satisfy the keen driver but not so advanced as to be fragile or difficult to maintain. The Kent engine breathed through a progressive twin-choke downdraught Weber carb, delivering its power via a slick-changing four-speed close-ratio gearbox shared with the Cortina 1600E and Corsair 2000E models. Uprated suspension, large front disc brakes and 5½-inch rims completed a setup that any competent mechanic could easily care for. The accountants were happy too, as most parts were already in production for other Ford cars. 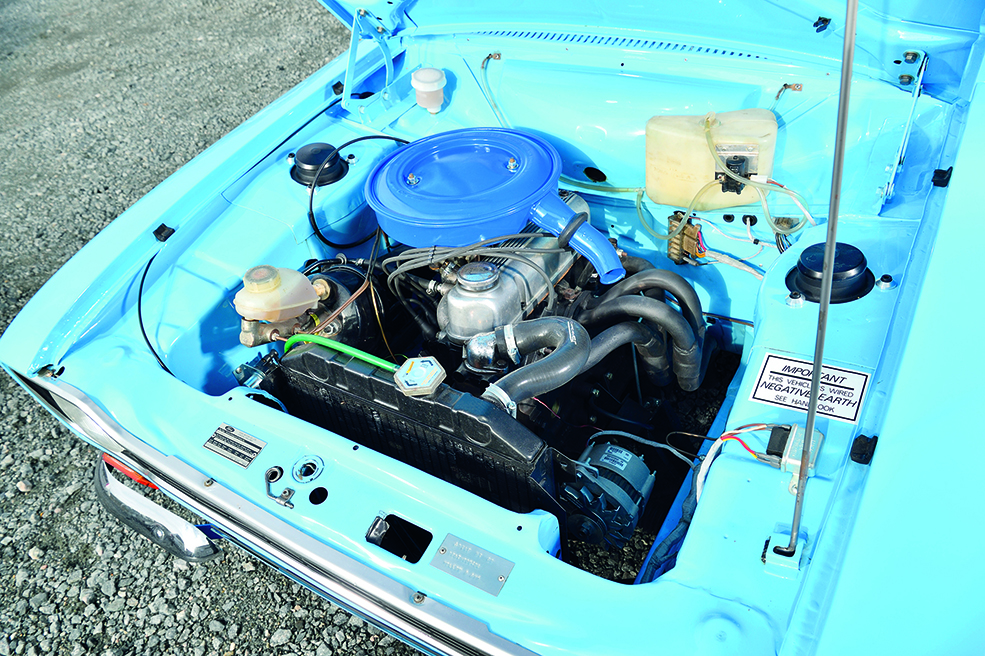 Following the World Cup Rally win, Ford’s marketing prowess came to the fore. Mexicos sold in large numbers, with over 10,000 Mk1 versions being produced. Meanwhile posters of Mexicos, normally pictured oversteering down dusty rally tracks, were to be found on the walls of teenagers’ bedrooms up and down the country. A legend had been created and almost 50 years later, the appeal and crowd-pleasing power of the Escort Mexico remains as strong as ever.

Let’s cut through the hype and find out what the Mexico is really like. The Olympic Blue car in the shoot was currently for sale at East Anglian specialist dealer Appreciating Classics. Proprietor Richard Beel explains: “This car was restored by its previous owner in 2006. He wanted the car to be a really usable example so has subtly upgraded brakes, suspension and engine.” Having covered less than 3000 miles since its rebuild, the car looks extremely fresh and could easily be mistaken for a very recent restoration. 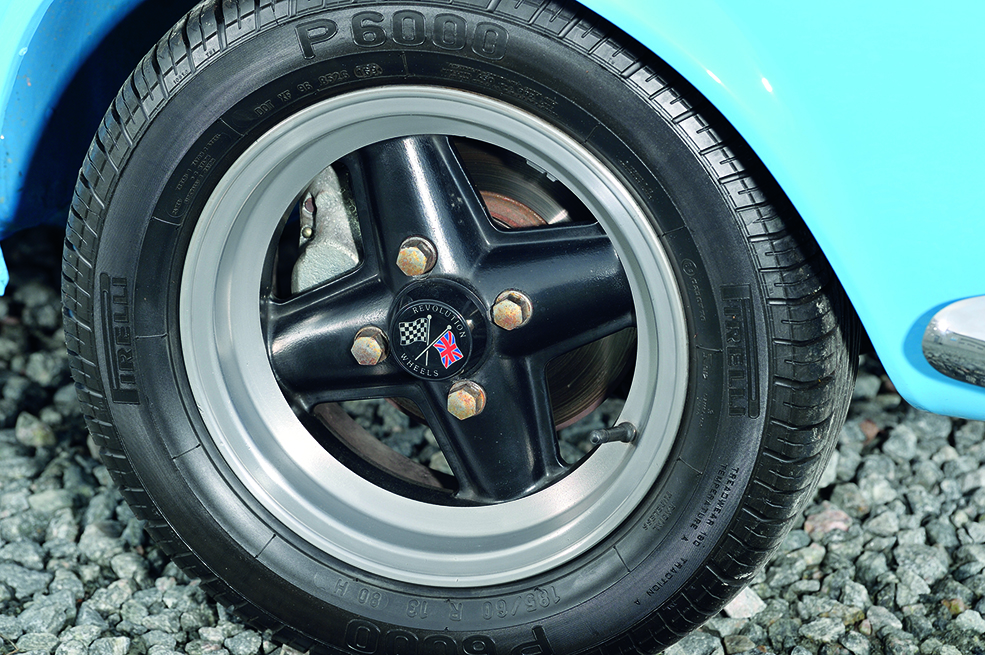 The contrasting dark blue side flash and flared arches above aftermarket Revolution alloy wheels give the Escort a purposeful stance. Lift the bonnet and the sparkling-clean engine bay looks remarkably uncluttered, typical of Ford cars of the era and certainly making for ease of maintenance. Inside, the original black vinyl interior is typical of any Seventies Ford, though later Mexicos were available with Recaro black cloth seats.

Sitting in the driver’s seat, the instruments are clustered in front of the driver with heater controls in the centre of the ‘plastic wood effect’ dash. Again, it’s characteristically Ford.

The clutch and brakes are heavy by modern standards; not so the steering. This is a small and light car, so power assistance is simply not necessary. Start the engine and despite the large Ford frying pan air filter, the Weber carb draws in air with an audible slurp. On the move, steering is light and precise and there’s a bark from the sports exhaust. The uprated suspension is firm, though not uncomfortable and body roll is virtually absent. The car feels completely rigid, as expected of the Mexico’s strengthened two-door shell. Gear changes are ultra-precise through the slick H-gate and the engine feels willing. 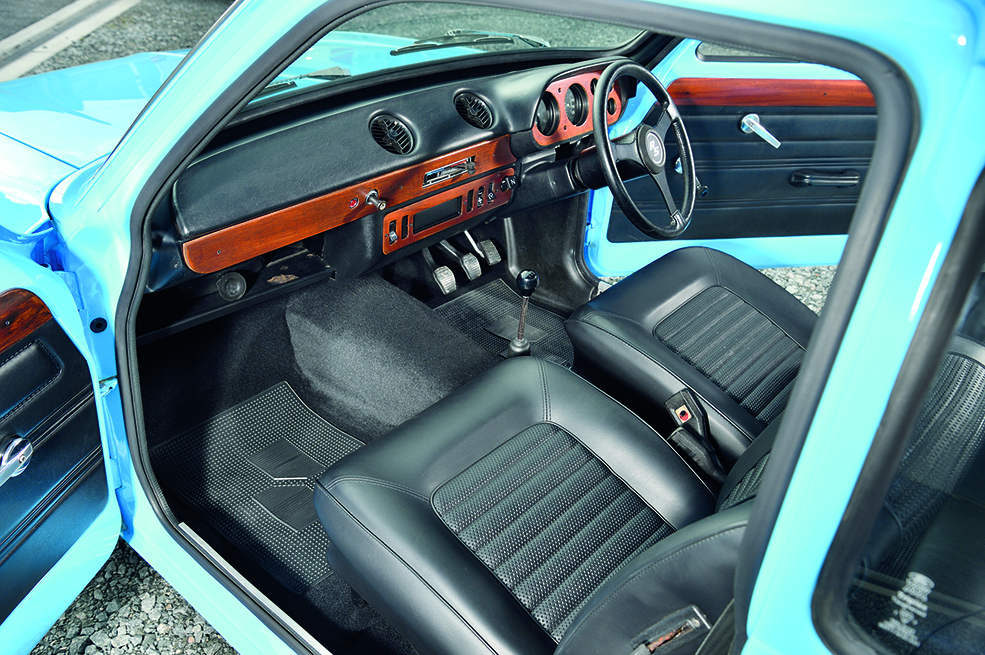 The impression is of a car that could be driven hard all day long and still come back for more. There’s absolutely no sense of a fragile prima donna – this Ford will simply shrug off hard work.

In summary, the Mexico is very well-engineered although hardly cutting edge in design. It’s quick, it’s reliable but most of all it’s still the poster car that teenage petrol heads dreamed about in 1970. The Mexico’s glamour and head-turning ability are undimmed. 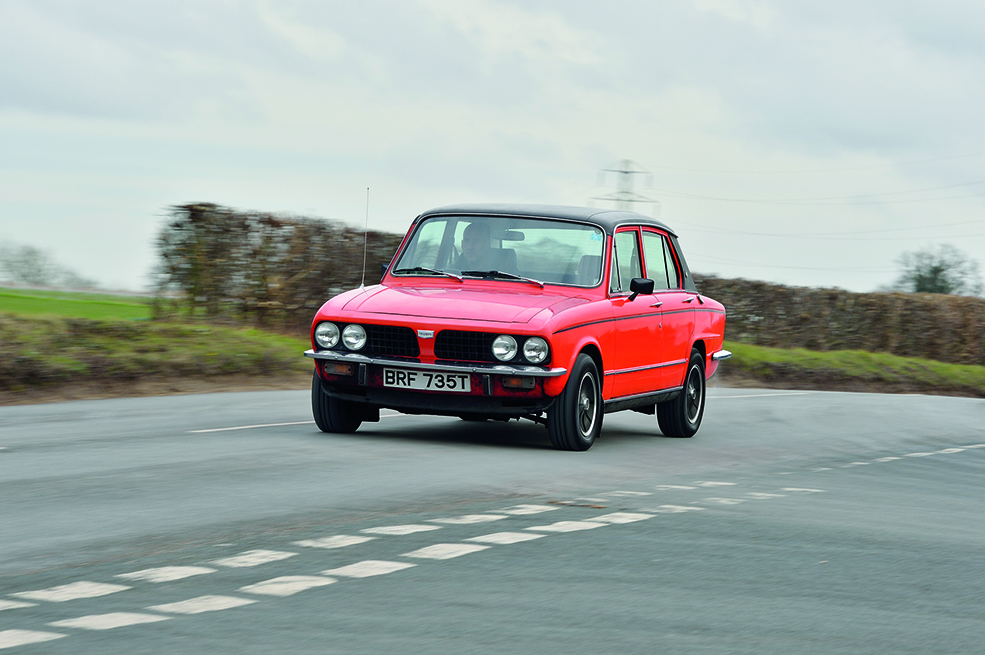 When Triumph launched their Dolomite range of mid-size saloons in 1972, the Mexico was already established and selling strongly. The Dolomite attempted to appeal to the budget-conscious buyer through a basic model, while simultaneously offering traditional Triumph virtues of performance and comfort, with higher trim levels and larger engines further up the range for the more affluent customer. Initially Dolomites were available with power units from a lack-lustre pushrod 1300cc to a decently-quick 1850cc overhead cam slant four.

When launched, the 1850 top-of-the-range Dolomite was well received by the motoring press and was praised its acceleration, cruising capability with the optional overdrive and its well-appointed interior. Triumph’s engineers soon sought extra power and performance, leading to the unveiling of the Dolomite Sprint in 1973. The engine had been stretched to a full two litres and a brand new cylinder design became the Dolomite’s pièce de resistance. Under new technical chief Spen King, Triumph had imaginatively created a 16-valve head, with the inlet valves operated directly from a single overhead cam, while rockers ingeniously ran from the backs of the cam lobes to open the exhaust valves. This unconventional layout effectively gave DOHC 16-valve performance without all the attendant complexity and on the dynamometer, the new motor was good for 127bhp. 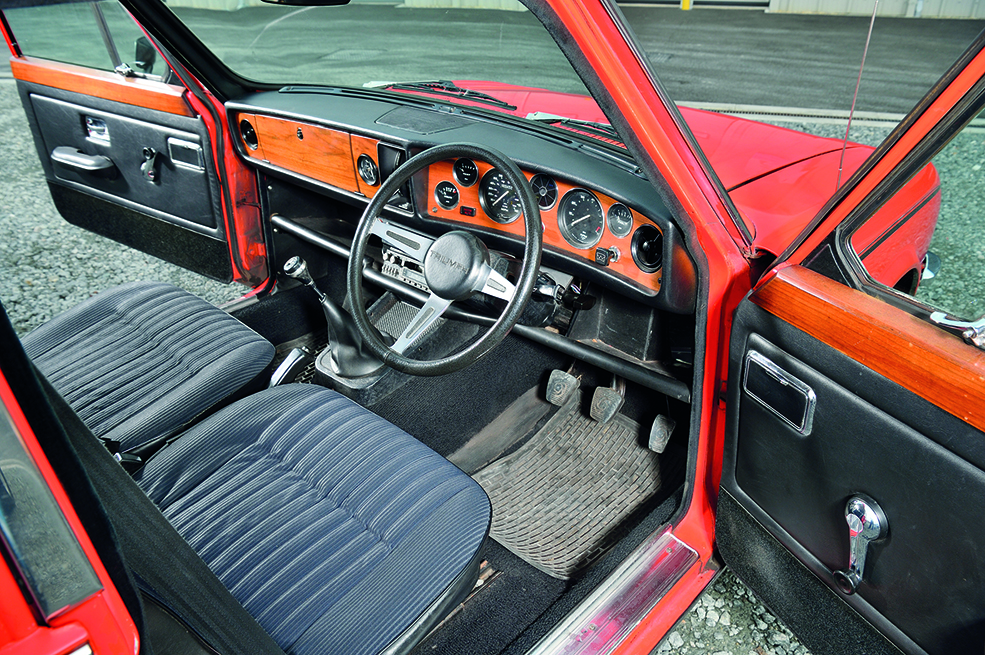 To handle the extra power, a strengthened Stag gearbox was fitted with overdrive and an uprated live axle. Suspension was coil-sprung all round, contributing to a comfortable, well controlled ride. The novel cylinder head won a UK Design Centre award, prompting Triumph’s advertising gurus to come up with the strapline ‘the award has gone to our head’.

The Dolomite Sprint was immediately recognised as a serious performance car, clearly capable of competing with the likes of BMW’s 2002. Unlike the Mexico, which was born from a stunning rally victory, the Dolomite Sprint went on to achieve more modest competition success later in life.

Stewart Marsden has owned this highly original 1978 Sprint for the last five years. He’s the Membership Secretary of the Triumph Dolomite Club and unsurprisingly found his Sprint through the club; the previous owner had clearly looked after the car exceptionally well since first purchasing it in 1984, as it has never needed restoration. His car is completely standard except for its Dunlop wheel rims and upgraded headlights. Stewart says “I like to drive the car as much as possible on club track days and it’s recently completed the Club Triumph Round Britain Reliability Run.” 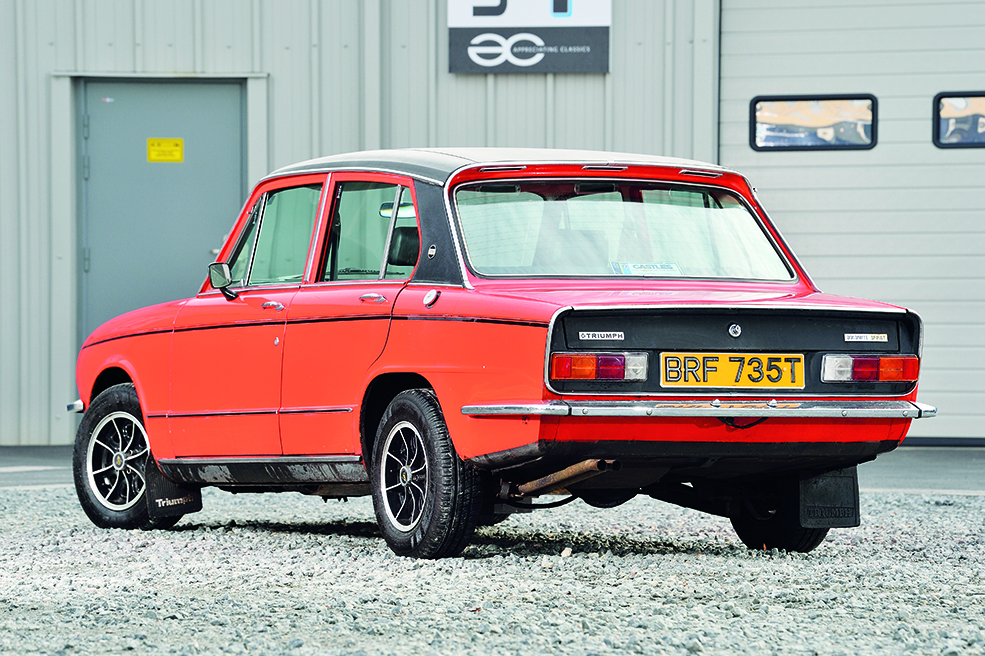 For the uninitiated, this motoring marathon is a 2000 mile round trip of England, Scotland and Wales, all completed in a gruelling single weekend. Stewart continues: “the car drove perfectly and I would happily jump in and drive anywhere. So far it’s been completely reliable.”

The Triumph’s cabin is cosy, with space enough for four. Thick black carpet and wide, comfortable fabric-covered seats combine with the genuine walnut veneer dash to give a pleasingly upmarket feel. Start the engine and there’s a slight lumpiness to the tickover, typical of the Sprint. On the move, this immediately smooths out and the 16-valve engine accelerates with real urgency. Despite a weight penalty of almost 200kg, the Sprint feels quicker than the Mexico. At the legal limit with overdrive engaged, it’s capable of relaxed cruising but flick the gear knob mounted switch out of overdrive and there’s instant acceleration on tap for rapid overtaking. The Sprint took Triumph’s philosophy of combining performance and comfort to a completely new level. 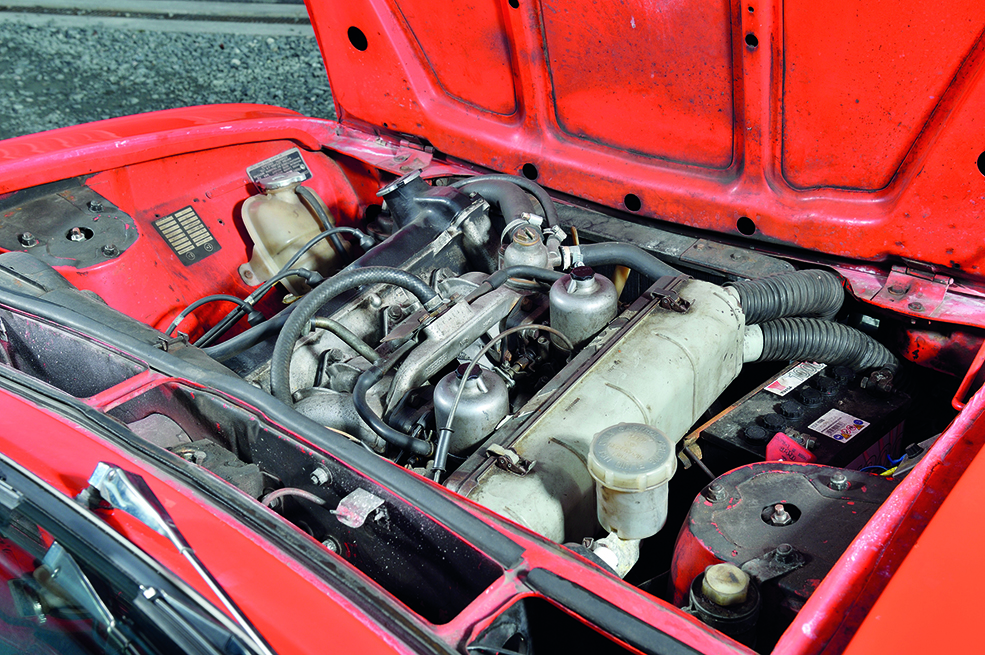 Ford and Triumph obviously approached the concept of a performance saloon car from radically different angles. The Escort is a rally car made usable on the road while Triumph took a well-mannered family saloon and installed a special power plant. Both cars are deserving of space in any enthusiast’s garage: such variety is the very spice of classic car ownership.

Market pricing says the Escort must be better but after our day spent with the cars, it’s not so clear cut. The Ford is quick but the Triumph is quicker and more comfortable. It’s all about perception: the Mexico remains a poster pin-up dream car, while the well-engineered Dolomite never quite shook off its somewhat sober image.

A Mexico will get you noticed and a Dolly Sprint is an excellent fast executive saloon. The choice is yours but before buying a Mexico, a word with the bank manager may be in order. 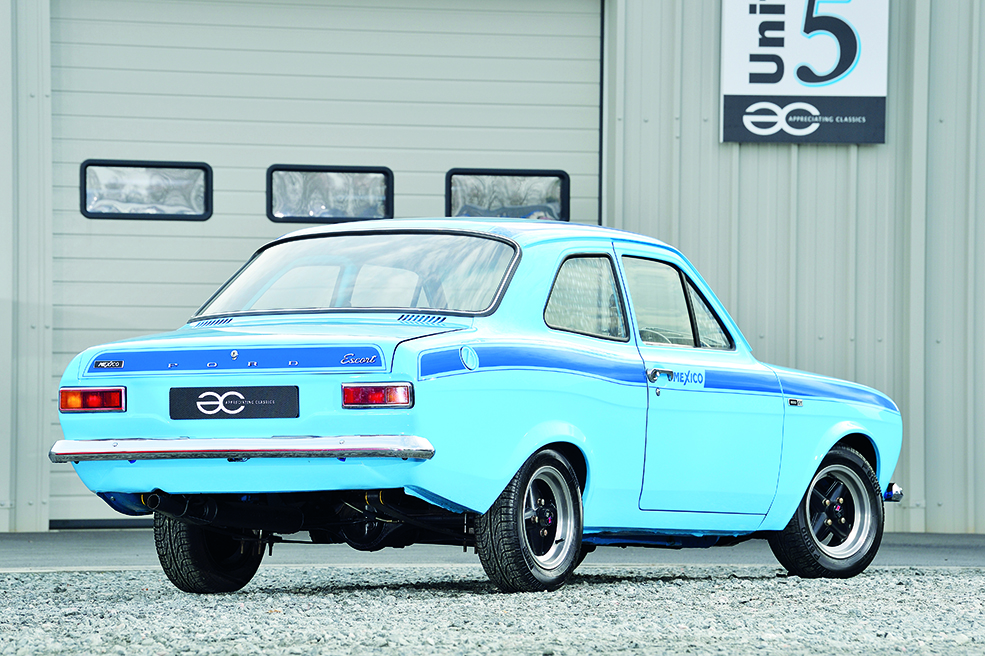