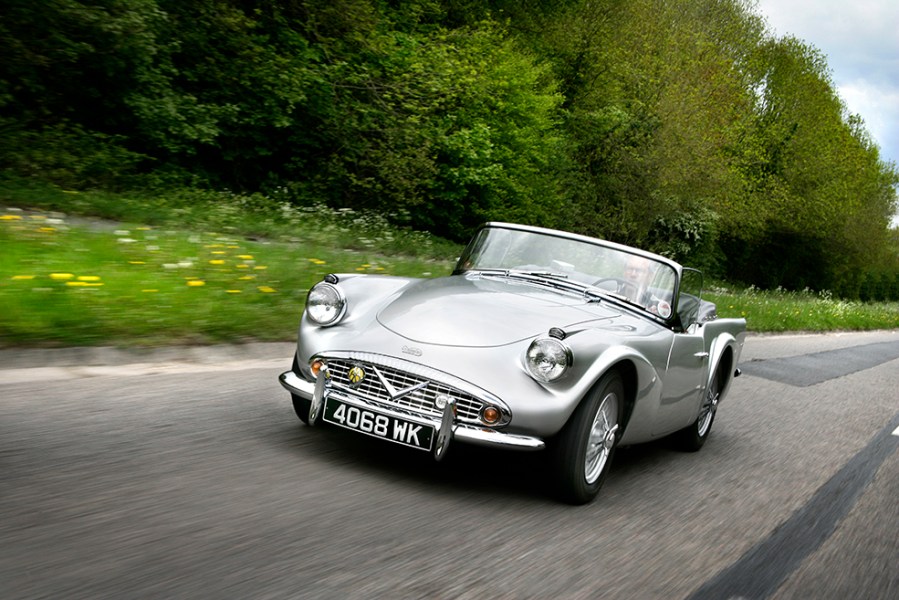 The Daimler Motor Company was purchased by Jaguar in 1960 and this long-established marque went on to survive for almost 50 years before being consigned to the history books. We look at a selection of Daimlers built during the turbulent Jaguar years.

Not to be confused with Daimler Benz or Daimler AG, the original Daimler Motor Company was an independent company incorporated in 1896 in London by investor and bicycle designer H.J. Lawson. The rights to use the Daimler name had been previously purchased from the German inventor Gottlieb Daimler by the engineer Fredrick Simms and after suffering early financial difficulties, the Coventry based Daimler Motor Company was eventually purchased in 1910 by the Birmingham Small Arms Company. Although this turned out to be a long and successful relationship, BSA finally sold its Daimler holdings to Jaguar Cars in 1960 for £3.4 million.

Part of the attraction for a then independent Jaguar to purchase Daimler was to gain its profitable bus and commercial vehicle division and during the Jaguar years Daimler became the second largest producers of public service vehicles after Leyland. The purchase of Daimler not only provided Jaguar with much needed room to expand its production facilities, it also gave the company access to Daimler’s Edward Turner designed V8 engine used to power the Daimler SP250 sports car and the Majestic Major saloon. Daimler cars, with their famous fluted radiator tops, went on to be built as badge engineered Jaguars and the famous name was finally dropped in 2007 during the Ford Motor Company’s tenure of the Jaguar marque and now belongs to India-based Tata Motors. 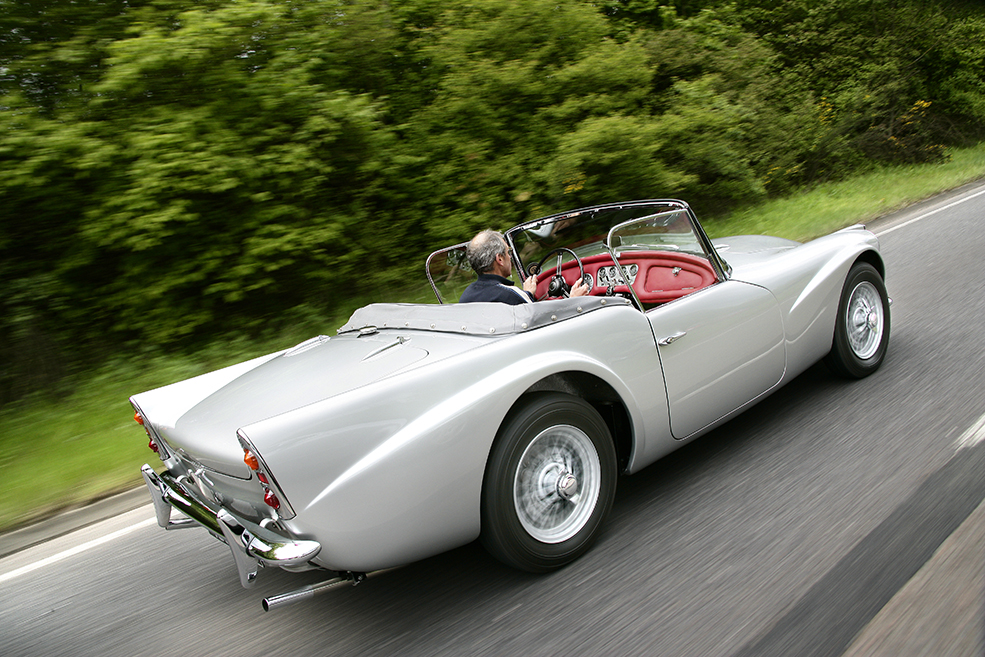 Originally introduced in 1959 as the Daimler Dart 250, the ‘Dart’ part of the car’s name had to be quickly dropped due to a pending lawsuit with Dodge who owned the trademark. Power for this lightweight glass fibre bodied open top sports car was provided by Daimler’s silky smooth 2547cc V8 engine mounted in a ladder frame chassis based on that used for the Triumph TR3. Although the ungainly looking SP250 had a top speed of over 120mph and was used by traffic police as a high-speed pursuit vehicle, the car’s chassis flexed badly and could even cause the doors to fly open at speed! One of the first jobs Jaguar did was to redesign the SP250’s chassis but despite a further revised C-spec SP250 being introduced in April 1963, the plug was pulled the following year. Expect to pay around £30,000 for the best examples and up to £22,000 for one in average condition.

Another Daimler announced at the 1959 London Motor Show was the V8 powered Majestic Major saloon. A development of the shorter One-O-One from 1955, the new 220bhp Daimler didn’t go into production until the following year. In 1961 a ‘The Motor’ magazine road test claimed a top speed of 122mph for the new Daimler saloon – no wonder the Majestic Major was once unfairly described as a 100mph funeral taxi!

Despite the Majestic Major’s traditional body-on-frame method of construction, the Daimler was a mechanically advanced car when compared to the competition of the day. By the time the car was being built under Jaguar ownership, standard equipment included Borg Warner automatic transmission, power steering and servo operated disc brakes on all four wheels. Jaguar pulled the plug on Majestic Major production in 1968, the year the Browns Lane based company was absorbed into the BL conglomerate. Today, a decent example should be able to be sourced for well under £20,000 and one requiring some work, which could turn out to be an expensive exercise, will cost around £5000 less. 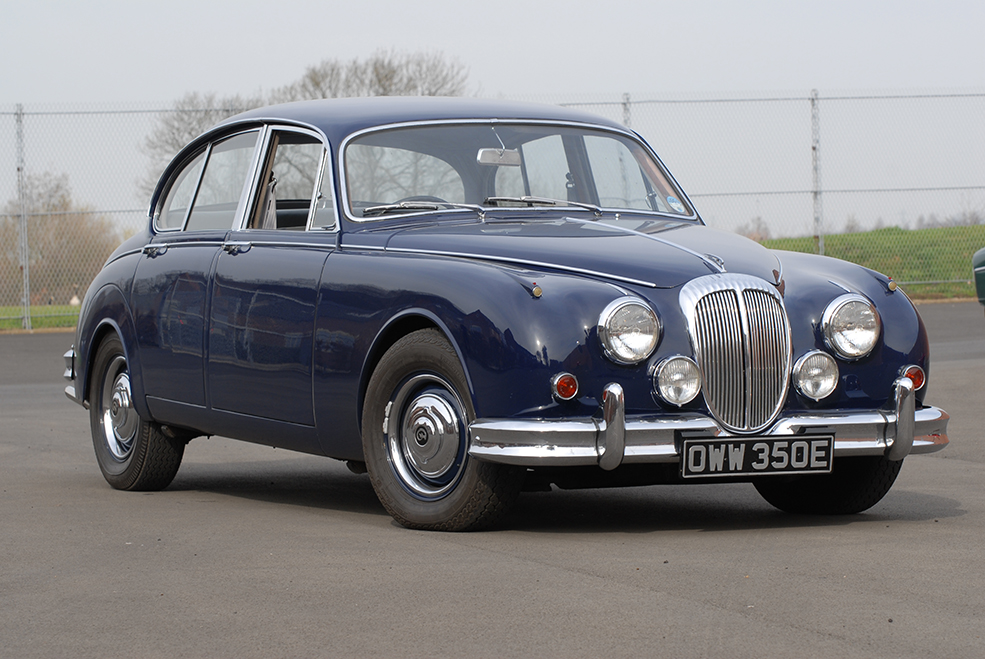 The first Daimler to be based on a Jaguar saloon, the 2.5 V8 was also the first Daimler to feature a unitary constructed body. Introduced in 1962, the Daimler 2.5 V8 was a rebadged Mk2 Jaguar under the skin and was identified by having a traditional fluted chrome plated grille, special wheel trims and a different rear number plate surround. The 2548cc V8 engine fitted to the Daimler was 51kg lighter than the XK unit found the Mk2 and to enable the more compact engine to fit, the sump on the lighter engine had to be redesigned to clear the front suspension mounts. As the weight distribution of the V8 was also different, the Daimler’s suspension had to be revised accordingly, giving the 2.5 Litre a unique visual stance.

Differences inside the well-equipped cabin included retaining the split front bench seat that had been used in the Mk1 Jaguar as well as a host of unique features to distinguish the more expensive Daimler from its Mk2 counterpart. Automatic transmission was standard on the Daimler and although power steering was a cost option, most cars came with this desirable extra. From early 1967, the 2.5 V8 was offered with a manual four-speed gearbox and optional overdrive. The revised and slightly more powerful Daimler 250-V8 was introduced later that year and now came with reclining front bucket seats, a padded dash top and a negative earth electrical system. The end came in 1969, almost a year after the new XJ6 appeared on the scene. Expect to pay at least £18,000 for a well-presented example and half that amount for one requiring some work. 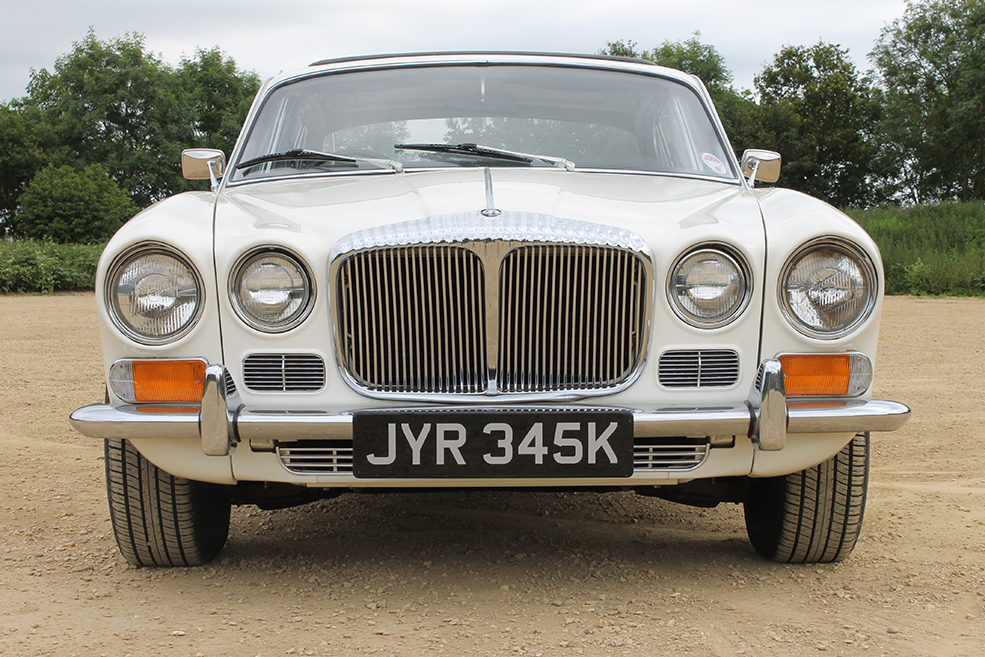 The first Jaguar-built Daimler to receive the Sovereign name was in 1966 when it was applied to the Jaguar based 420, a model developed from the S-Type. In October 1969 the Daimler badged 420 was replaced by the Series One XJ6 based Sovereign, which was offered with a choice of either a 2.8 or 4.2-litre version of Jaguar’s XK DOHC straight six. With the exception of the traditional fluted grille and rear number plate surround, the exterior of the new Daimler Sovereign was virtually identical to the Jaguar XJ6. There were some slight differences inside the car, as the Daimler featured plain door cappings rather that the Jaguar’s veneered toppings and the steering wheel boss now displayed a stylised Daimler ‘D’ rather than a Jaguar growler.

Introduced in July 1972, the 5.3-litre V12 Double-Six revived a name first used by Daimler in the 1930s and a few months later the Double-Six was followed by the long wheelbase Double-Six Vanden Plas. The Series Two XJ-based range was unveiled in September 1973 with a shallower grille and a raised front bumper to satisfy US low impact collision regulations. Another big change came in 1975 when the 2.8 inline-six engine was dropped in favour of the 3.4-litre XK unit. Also introduced for the 1975 model year were the now highly sought-after stylish two-door coupes, which utilised a shortened XJ6 platform. In 1979, the year after the coupes bowed out, Daimler introduced the heavily revised Series Three Daimler Sovereign. Major changes to the new four-door saloon included fitting thicker front and rear bumpers, deleting the car’s opening front quarter lights and redesigning the roof line to provide more rear headroom. 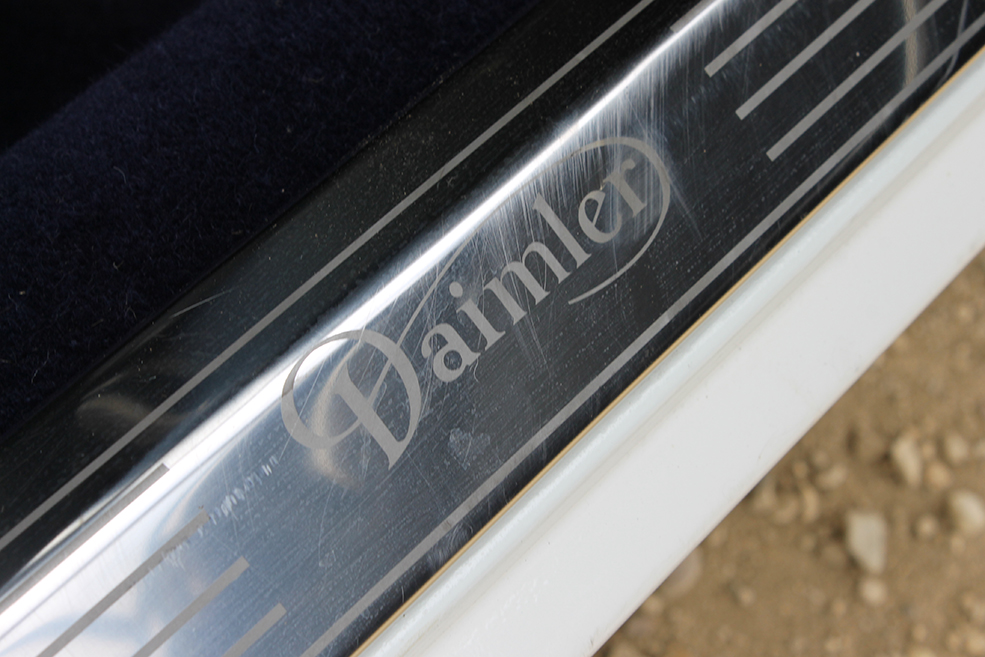 It was all change again in 1982 when the Sovereign badge was transferred to the range topping Jaguar XJ and the Vanden Plas badge was withdrawn the following year. Today, prices vary hugely for these XJ6 and XJ12 based Daimlers, with the most expensive model being the highly desirable V12 powered coupe. Good examples often change hands at auction for as much as £20,000, while an equally equipped Series One to Three V12 saloon will cost between £11,000 and £16,000. Really clean six-cylinder XJ series Daimlers (with the exception of the coupe) are generally in the region of £3000 to £4000 cheaper and decent examples represent excellent value for money.

Production of a limited number of Jaguar-based Daimler saloons continued through the Ford owned Jaguar years with the 3.6/4-litre (1986-94) based on the XJ40; the Jaguar X300-based 4.0 litre (1994-97), the Jaguar X308-based V8 powered Eight/Super Eight and the X350-based Super Eight. No Daimler badged cars were produced after 2007 and today this famous marque is owned by India based Tata Motors. 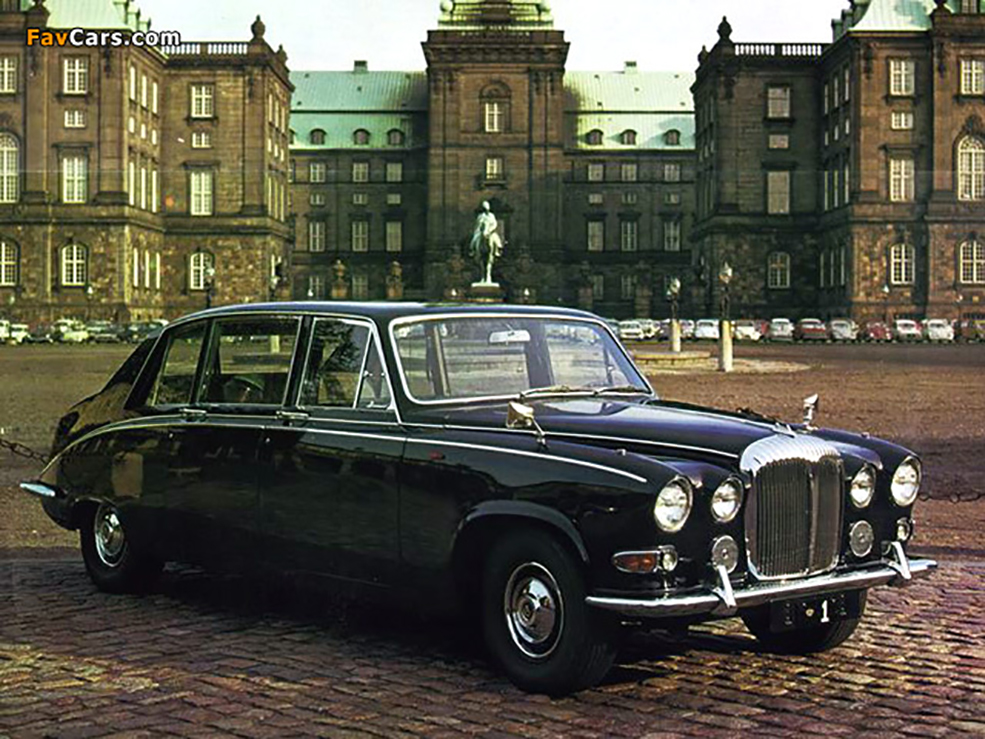 No Daimler feature would be complete without mentioning the luxurious DS420 limousine. Based on an extended Jaguar 420G platform, the DS420 was introduced in 1968 and replaced the V8 powered Majestic Major based DS450 limousine. As Daimler together with Jaguar had become part of the British Leyland empire that year, the DS450 also kicked the long in the tooth Vanden Plas 4-litre Princess Limousine into touch. Power is delivered to the DS420s rear wheels though an automatic gearbox by a 4.2-litre straight-six and although this stately Daimler looks impressive it’s not a very comfortable car to drive.

The driver has to perch on a narrow leather covered bench seat and is separated from the passenger compartment, which can accommodate six occupants, by a glass division. Despite the final version of the DS420 being produced in 1992, the car is still being operated by a limited number of chauffeur services and the DS450 has also found fame in the Royal Household, which had its first association with the Daimler marque back in the early years of the twentieth century. If you wish to impress the neighbours, a very smart example of one of these stately limousines could be blocking up the drive for a mere £15,000, while a well-used but still decent example will come in at around £9000.