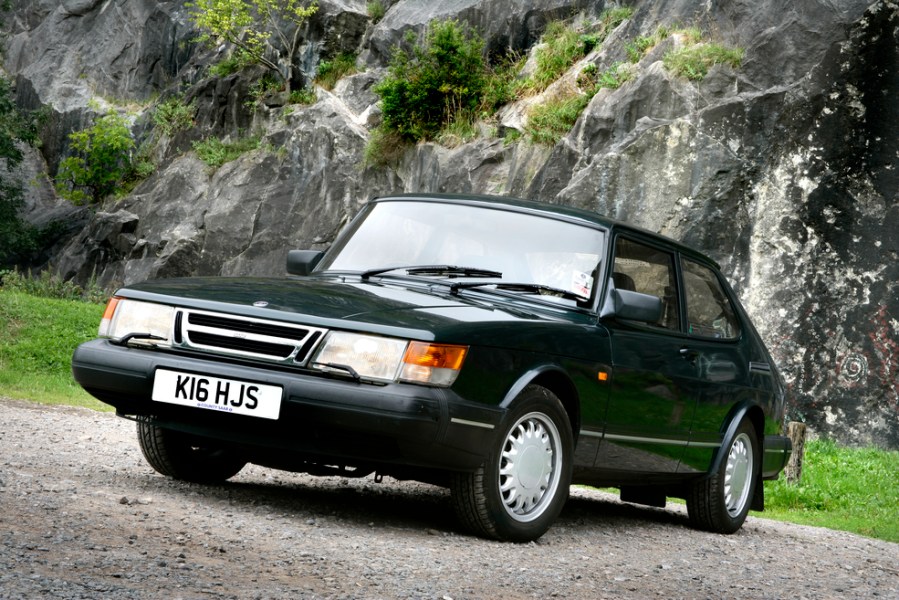 Two Swedish classics often mentioned in the same breath but very different under the skin. Which gets the vote as a classic today?

One of the few cars I’ve ever spun (unintentionally, anyway…) was a Volvo 240. Admittedly I was some 30 years younger then and this was a dirt road in rural Canada, but as I twirled the slow-geared steering in an attempt to catch the fishtailing I developed a sudden respect for the men who wrestled these cars to victory in various European saloon racing championships. The boxy 200-series has many virtues, but innate sporting ability isn’t one of them.

At first sight, it would appear that you could say very much the same of the 240’s Swedish contemporary, the Saab 99. A big front-wheel drive hatchback saloon in the mould of perhaps the Maxi (no, really) it shared the Volvo’s philosophy of being a solid family car designed to shrug off the northern European climate for hundreds of thousands of miles.

Until, that is, Saab’s Per Gilbrand got interested in forced induction and the resulting 99 Turbo transformed Saab’s image from maker of quirky niche cars to a serious performance contender.

Ironically, today the once sober and sensible Volvo marque is still with us and very well regarded too, whereas poor old Saab is dead and gone as an automotive brand. All of which has some relevance today as we try to consider which gets the vote as a classic. 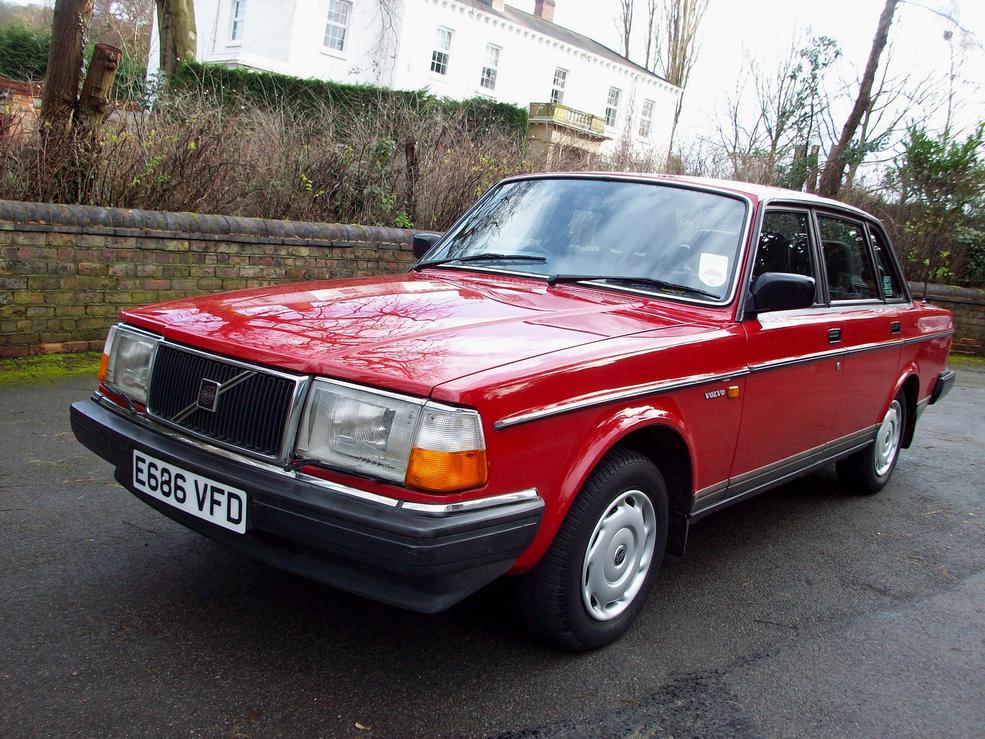 The 200-series Volvos were very much an evolution of the 140 model which was in itself a replacement for the much missed Amazon. Launched in 1966, the square-rigged 140 looked very different from the curvaceous Amazon but under the skin the running gear was very similar. The new car built upon the many safety features for which the Amazon had become famous and added more: disc brakes all round, split steering column, better seatbelt catches, anti-burst door locks and designed-in crumple zones.

The cars were marketed as the 144 with the four-cylinder B-Series engines and as the 164 with an extended front end to accommodate a straight-six engine.

As is perhaps obvious from its styling, the 240 was effectively a major facelift of the 140, its frontal styling being inspired by a 1972 safety concept show car. The running gear was modernised with the addition of the new overhead-cam B21 engine replacing the pushrod B18 in the four-cylinder 240 models and the six-cylinder option remained, now badged as 260 using the Peugeot/Renault/Volvo ‘PRV’ V6 engine. As was traditional at Volvo by then, an estate was also offered, badged as 245 or 265 accordingly. 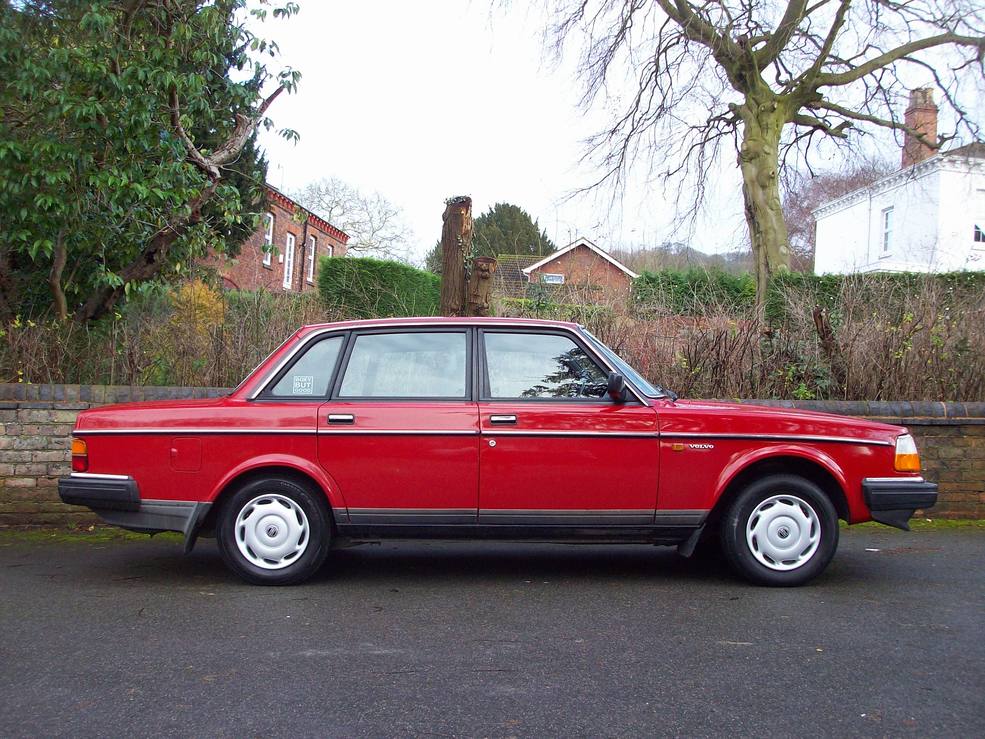 The chassis was updated too, although in a way it became less sophisticated since it swapped the Amazon and 144’s wishbone layout for the cheaper MacPherson strut. At the rear end, the coil-sprung live axle remained, giving the Volvo the advantage of simplicity which was no doubt welcomed in the more rural parts of Scandinavia.

The 200-series would continue largely unchanged until its end in 1993, with the oddball Bertone-styled 262C coupe added in 1977 and the 240 Turbo in 1980, sadly not sold in right-hand drive. The car would be little altered in its lifetime, benefiting from incremental improvements rather than major revisions. A facelift in 1979 softened off the styling and in 1981 the car gained the square lamps which would last until the end of production, with a further facelift in 1986. Incredibly, some 2.8 million examples were sold worldwide – many of them constructed, incidentally in the eastern Canadian city of Halifax where the Volvo’s winter capability and European flavour lent itself well to the harsh winters.

Driving a 240 is a relaxing experience, the heavy doors clunking shut and leaving you in no doubt that this is a solid vehicle, designed to last and also designed to let you walk away from the biggest incidents. You sit high up, with no pretensions to a sporting experience and the broad seats are a supremely comfortable way to cover big distances. The simple, clear and logically laid-out dashboard is reminiscent of a Mercedes or BMW from the same era and all the better for it. 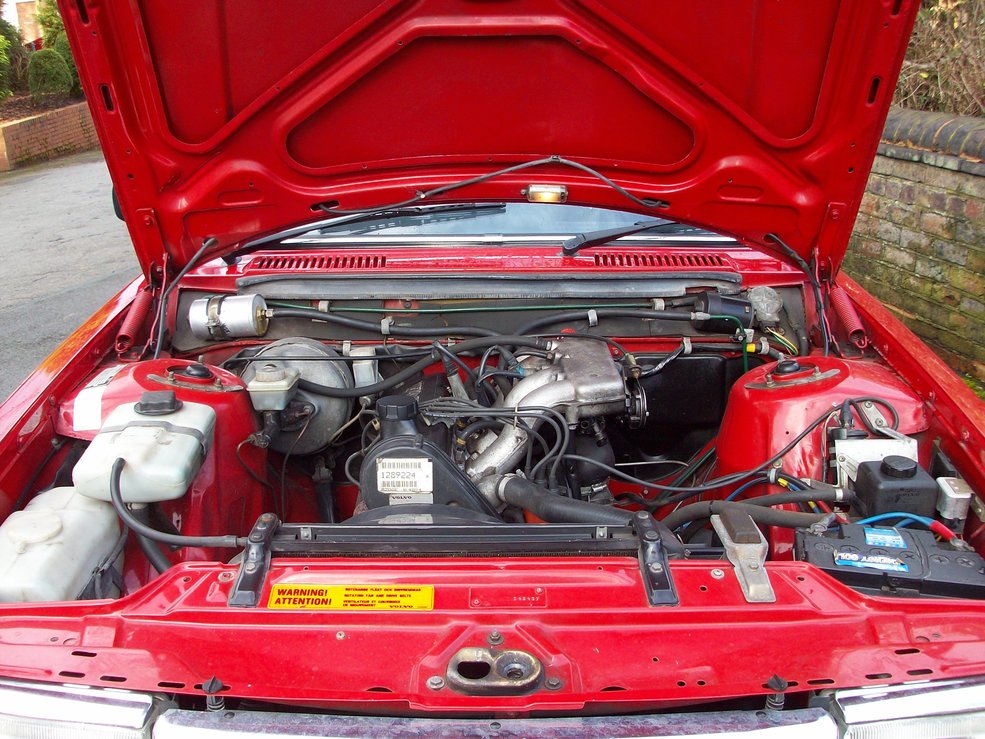 The B21 engine is no high-revving screamer, but it’s surprisingly smooth, delivering the goods with a whirring whoosh rather than a clatter and even mega-mileage examples generally feel unburstable. It’s a torquey unit and Volvo was one of the last makers to persist with an overdrive unit, using a switch mounted on the gearknob to provide a couple of extra ratios.

Despite its lack of sporting pretensions, the 240 is happy to cruise at high speeds all day and although it’s no less capable in the corners than, say, a Cortina it’s just not happy being thrown about unduly; that’s just not quite what they had in mind at Gothenburg.

Ah, and the estate. The Saab’s hatchback rear may make it a capacious load carrier but the Volvo has it beaten, especially for length – and that’s before the roof bars even go on. if you want a classic estate car which can double as a van then it’s either a 245 or a CX Safari.

Owning the Volvo is pretty painless. Parts supply is superb courtesy of the many specialists and their solid construction means the interiors last well, even if the bodywork can corrode. It’s all pretty straightforward though, with mainly the three-part sills presenting a tricky issue if they’re too far gone. How then does it measure up to its homegrown competitor? 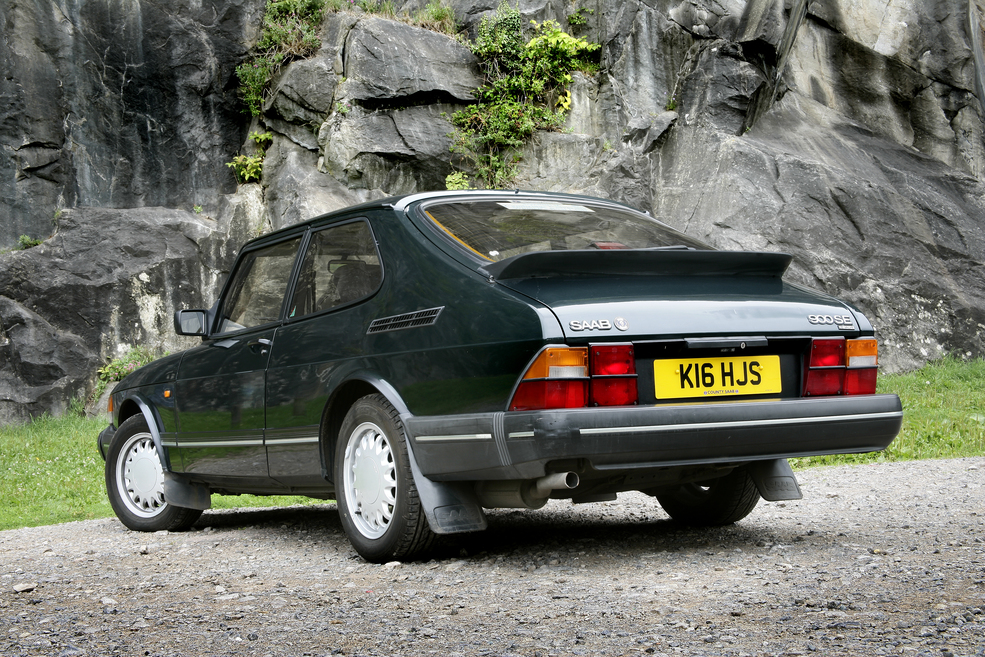 Such was the long lifespan of the Volvo 240 that its Saab competitor at launch was the 99, itself evolved into the 900 from 1978 which then outlived the Volvo by some five years.

We remember the 900 today primarily in its Turbo incarnation but in many ways the mid-range models were a better product. The fierce turbo lag of the older turbo installation can be fun but it does make the cars hard work to drive fast and it’s only the later T16 models which really have the punch to justify it; for most of its life the Turbo had a modest 145bhp which in a 1200kg car meant brisk rather than savage.

In its 110bhp 2-litre Bosch-injected form, the 900i of the mid-’80s just had the edge on the Volvo for performance, the carb-fed GLS model with its 106bhp being perhaps a more direct match. But both engines offered over 120lb.ft torque which made progress similarly smooth and the Saab came with the bonus of a factory-fitted five-speed.

Oh and don’t mention the Dolomite engine among Saab fans: yes, the original Saab block engine was derived from the Ricardo development work which also produced the Triumph slant-four engine but by the time the 900 came along the engine was very much a Saab production and was even using the Swedish firm’s modified block casting. 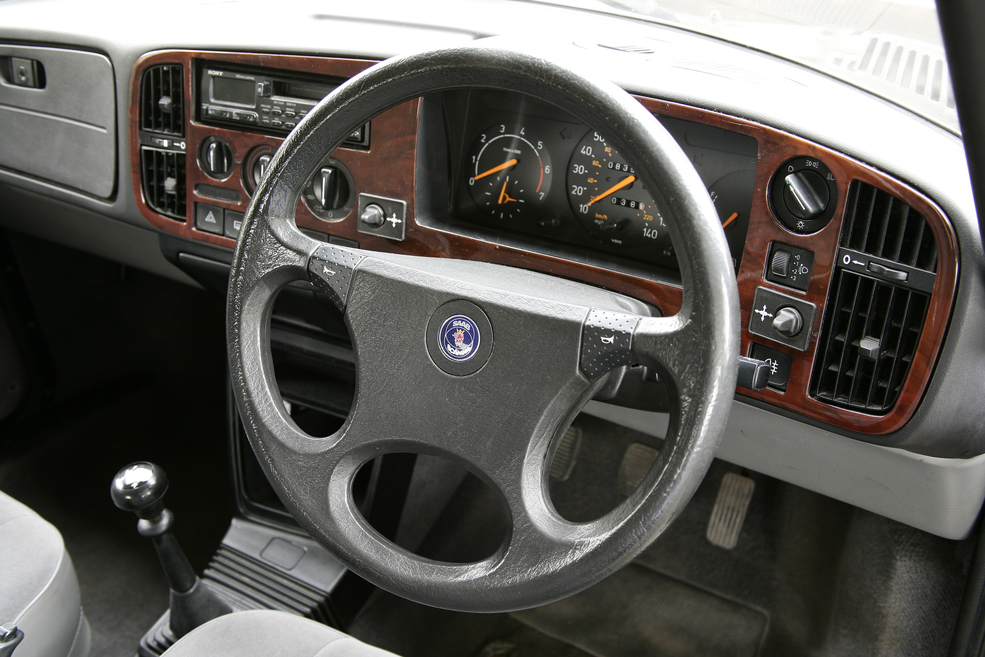 So far, so conventional, but in almost every other respect the 99 and 900 are about as unconventional as you can get. For a start, in order to provide front-wheel drive with a longitudinal engine layout, the gearbox is positioned underneath the engine, rather than behind it in old-school Audi style. The gearbox is driven by a chain from the crankshaft, something which involved rotating the engine through 90 degrees and resulted in the clutch being behind the radiator and the water pump up against the bulkhead. It’s also of course the reason for the Saab’s distinctive droning exhaust note since the exhaust pulses are effectively reversed.

Elsewhere, the body construction also employed some novel features, including a built-in roll cage which extends around the windscreen perimeter, plus the cutaway sills. This last feature is peculiarly Scandinavian, designed to avoid the car’s occupants getting winter road dirt on clothes while climbing in and out.

Drive a 900 for the first time and it will really feel alien, with the prominent dashboard, the car’s high waistline and the curving windscreen. This last feature was adopted from aeroplane design practice and was intended to give the driver good all-round visibility, which it does… to a point, although by the 1980s that aerospace connection was increasingly tenuous. 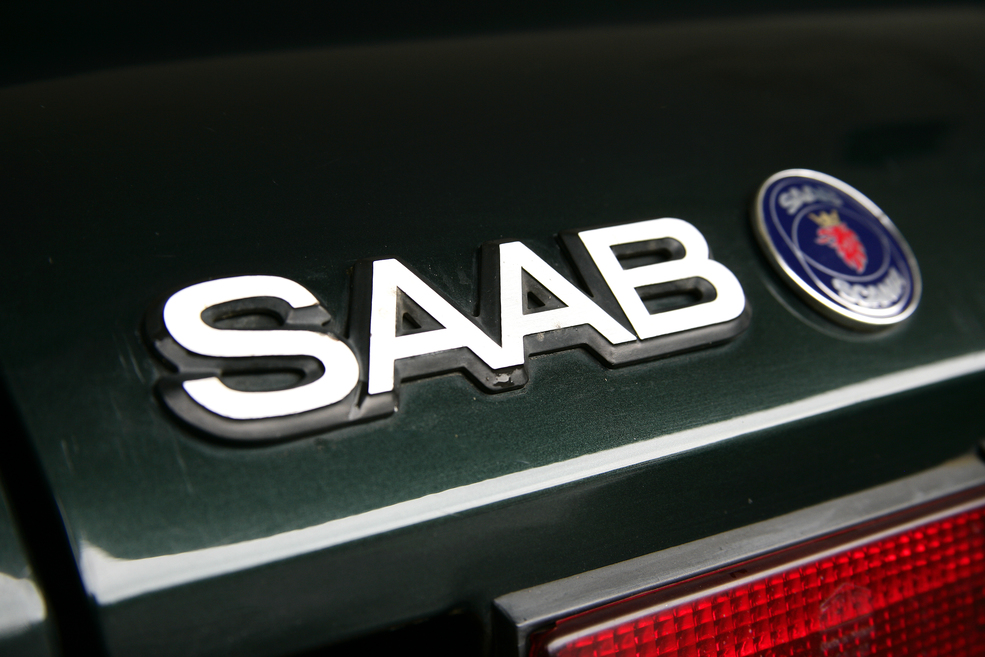 The reverse gear lock is another signature Saab feature which will catch you out even after months of driving the 900, but rather than a gimmick it has a genuine safety purpose: Saab engineers reasoned that in a crash, there was no ignition key and barrel to injure the driver’s knee.

Much like the Volvo 240, progress in a non-turbo Saab 900 is smooth and relaxing and again, thanks to its allegedly orthopaedically designed seats it’s a comfortable car over long distances.

The ownership proposition is a different matter though. Like the Volvo they’re solid cars and resist rot better than many of their competitors from the time, but rescuing a rotten one can be hard work, thanks to double-skinned sections and complex shapes. it’s not helped by the demise of Saab itself, which is perhaps the biggest stumbling block to owning one of these cars today. While specialists in the UK can supply all the mechanical parts you’ll need to keep the car on the road, trim is becoming increasingly scarce and tidying up a shabby interior can be hard work: door cards and glovebox lids for example tend to warp over time but are unavailable new.

It’s harder than you might think: ignore the injected 240GLT and the 900 Turbo and it’s hard to pick between the mid-range Volvo and Saab. On the one hand, the rear-drive Volvo appeals with its solid simplicity, while the Saab offers its quirkiness. Ultimately, my choice would be the Saab 900 T16S convertible, but when it comes to the saloons, I’ll put my money with the Volvo, for its ease of ownership and its boxy styling. And of course because it will also remind me of the Canadian summer and being 18 again…