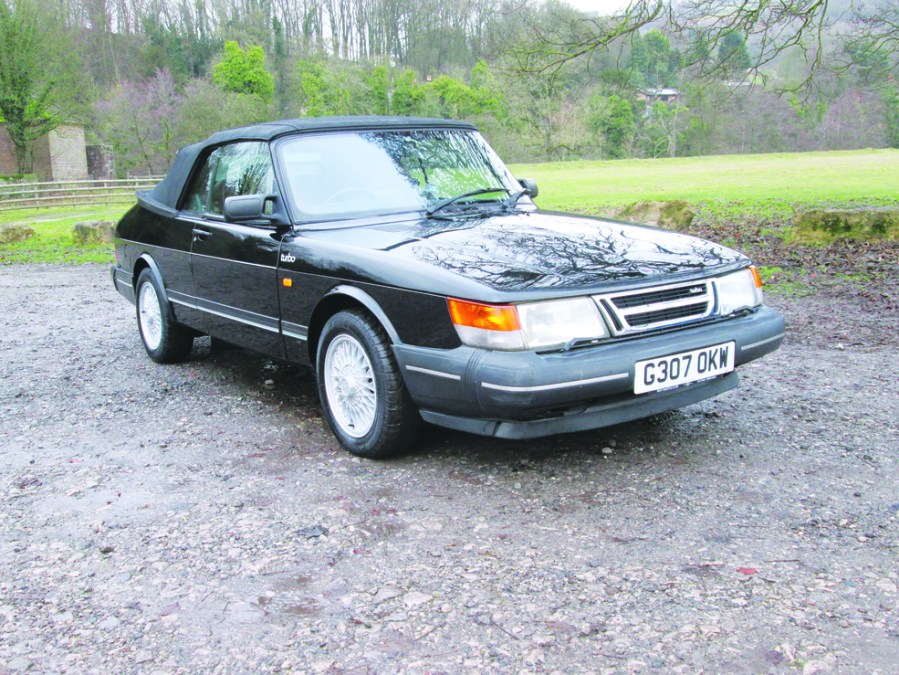 Fancy a quirky turbo four-seater convertible for the summer? Then the Saab 900 is now a genuine classic.

The disappearance of Saab as a volume car-making brand left a big hole in the automotive world. Nobody quite managed to pull off the combination of engineering pedigree, almost-premium branding and, well, sheer quirkiness.

Founded as an offshoot of the aerospace maker of the same name, Saab always ploughed its own furrow, seemingly paying little heed to accepted practice in the world of car building. Barring the smoky Trabant, it was one of the last makers to abandon the two-stroke engine, it persisted with the freewheel until the 1970s and was also a forward-looking pioneer of the workable turbo car.

Early Saabs were very much a product of the environment which created them, a combination of the firm’s genesis in the world of aeroplane design and the unique demands of the Scandinavian climate. The first Saab car was made in 1949 and the firm’s 1950s models were shaped using the aeronautical principles of a stressed fuselage skin and attention to aerodynamics which explains their unique beetle-backed shape. Front-wheel drive placed the engine’s weight over the driving wheels for good winter traction, while also allowing a smooth underside which skated over piled snow. Meanwhile, the simplicity of the two-stroke engine required minimal maintenance which in rural Sweden was a definite bonus.

Saab, however, had its eyes on international success and the Swedish market was tiny by global standards which dictated a gradual move towards the mainstream. The two-stroke was replaced by the Ford V4 four-stroke in 1967, the same year in which the firm’s first truly mainstream car was launched in the shape of the Saab 99. 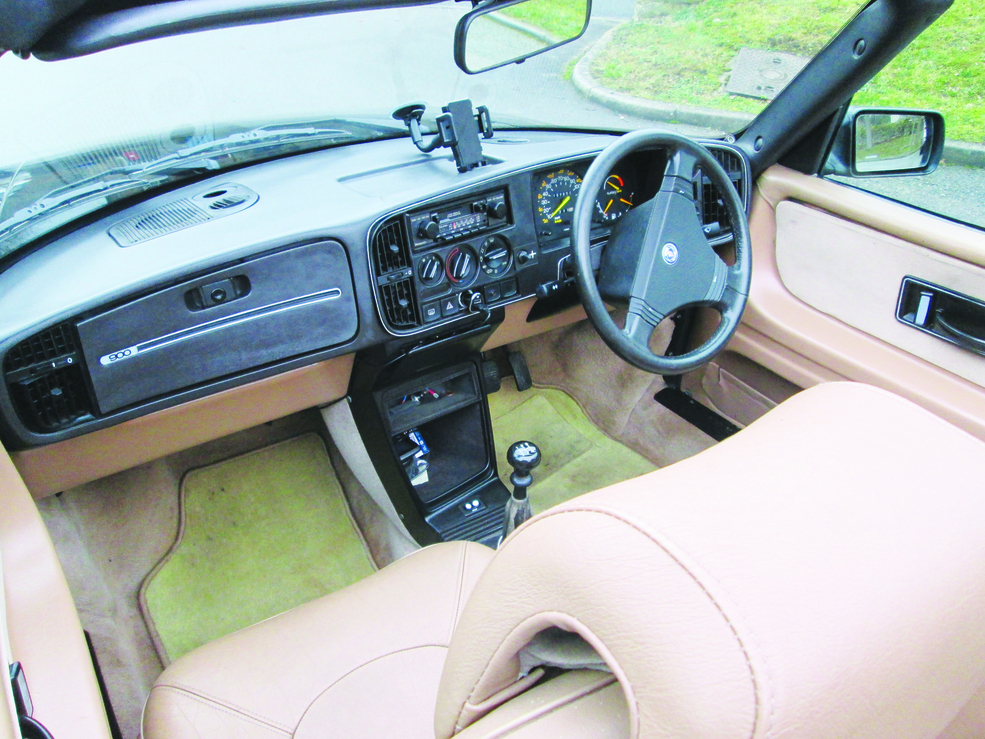 A modern-looking, front-wheel drive saloon, the 99 owed a big debt to our own Triumph Dolomite, since an introduction via engineering consultancy Ricardo resulted in a joint development programme to create a suitable four-cylinder engine for use in both the Dolomite and the proposed new Saab.

Using it in the Dolomite simply required a conventional gearbox bolting to the back of it so it could drive the rear axle via a propshaft. In the Saab though, it would be driving the front wheels which presented more of a challenge. The unit was too large to be installed transversely, whereas using a conventional gearbox would see the engine sited well ahead of the front axle line in the Audi style.

The solution which was eventually adopted showcased Saab’s independent spirit better than perhaps any other feature of their cars. The engine was installed longitudinally, the gearbox placed underneath it, driven by a hefty chain and the entire assembly rotated through 180 degrees to make it work.

This did of course mean that the clutch ended up behind the front grille, while the unusual exhaust layout required by the ‘backwards’ installation is what creates that unique droning Saab exhaust note. 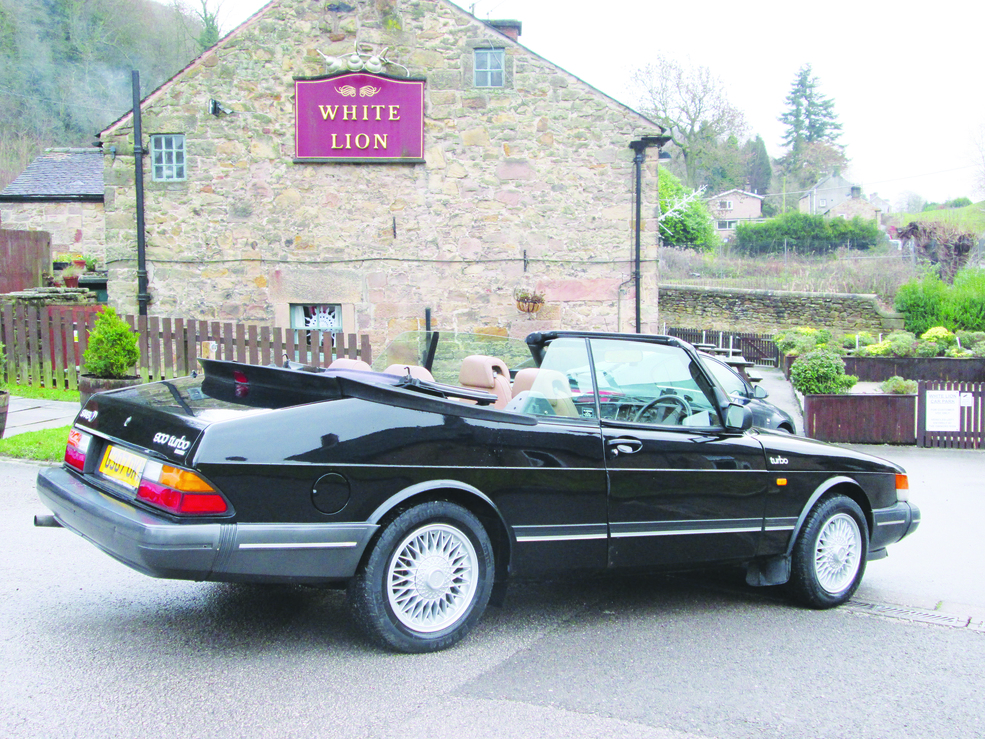 It was in 1978 when the 99 was facelifted into the 900 – essentially the same car but with a longer nose. The 99 Turbo would appear in the same year, the addition of a Garrett turbocharger boosting the 2-litre Saab engine to 145 bhp. By then the engine had already moved away from its Triumph origins, having been taken out to 1985cc in 1972 using the revised Saab ‘H’ block.

It wasn’t the first turbocharged road car but it was pretty much the first properly developed installation and was largely the vision of Saab engineer Dr Per Gillbrand, who uttered his now famous quote at the unveiling: “All engines have an oil pump, a fuel pump and a water pump – so why not an air pump? That’s all a turbo really is. I think it’s odd that all engines don’t have one.”

The turbo engine would be fitted to the 900 from its introduction, initially in the same 145bhp guise as the 99 Turbo and from 1984 in 16-valve, twin-cam guise.

In the meantime, over in the USA the Saab brand was successfully positioned as a quality premium European import, but the lack of an open-top model left it losing a significant number of sales to BMW.

President of Saab’s UK importer, Robert J Sinclair pressured management back in Trollhättan for a 900 convertible and with the help of American Sunroof Company a prototype was created which was exhibited at the 1983 Frankfurt motor show.

The open-air 900 was technically Finnish rather than Swedish, since it was produced by Valmet in Uusikaupunki which made the booted saloon versions of the 99 and 900 for Saab and would later produce the Boxster for Porsche among other cars. The original prototype had been based on the hatchback model, but when the design was engineered for production the two-door saloon was used for the basis of the convertible since it offered greater rigidity.

The convertible top was engineered for Saab by the American Sunroof Company and was a multi-layered affair the equal of anything from Mercedes or BMW. In truth the styling of the 900 didn’t lend itself to a traditional convertible style in the BMW or Mercedes mould but the addition of a horseshoe-shaped spoiler around the rear did create a distinctive-looking car. 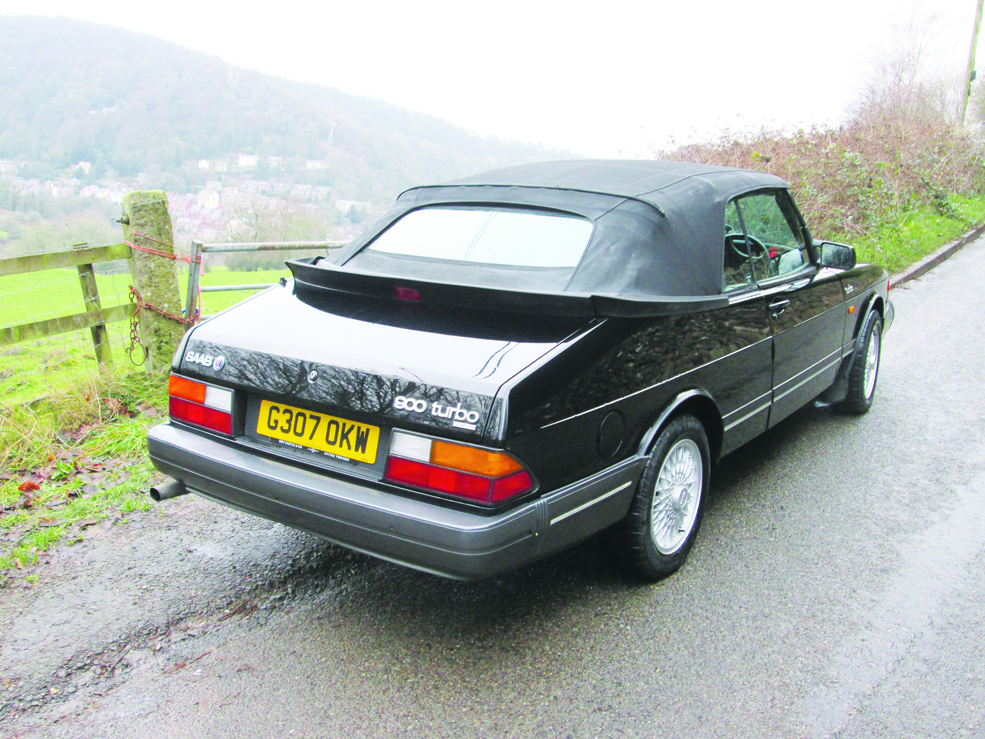 The prototype used the 16-valve turbo engine, which by then was good for 175bhp and this was retained for the production cars. The end result was an intriguing package which worked well as an alternative to the German brands and with its front-drive layout offered proper four-seat accommodation.

The 900 was replaced by the ‘New generation’ Vectra-based 900 in 1993 and worthy though they are, to enthusiasts of the traditional Saabs these cars represent the slow death of the Saab brand in the hands of General Motors.

The ‘classic’ 900 however still enjoys a strong enthusiast following and it’s a testament to the solidity of the cars that there are so many still around. How do they stack up as a usable modern classic? To find out, we borrowed a 1990 Turbo recently acquired by our sister title Classics Monthly.

If you’ve never driven a ‘proper’ Saab before then the bafflement will start as soon as you’ve climbed in through the strangely cutaway doors – designed that way to avoid dirtying clothes with the build of winter snow and slush on the sills – and tried to find the ignition key slot.

Even after a week with the car, I was still forgetting about Saab’s unique reverse gear ignition lock which replaces the conventional steering lock Rather than a mere gimmick, it was introduced on safety grounds, the idea being that a column-mounted key could injure a driver’s knee in a crash. 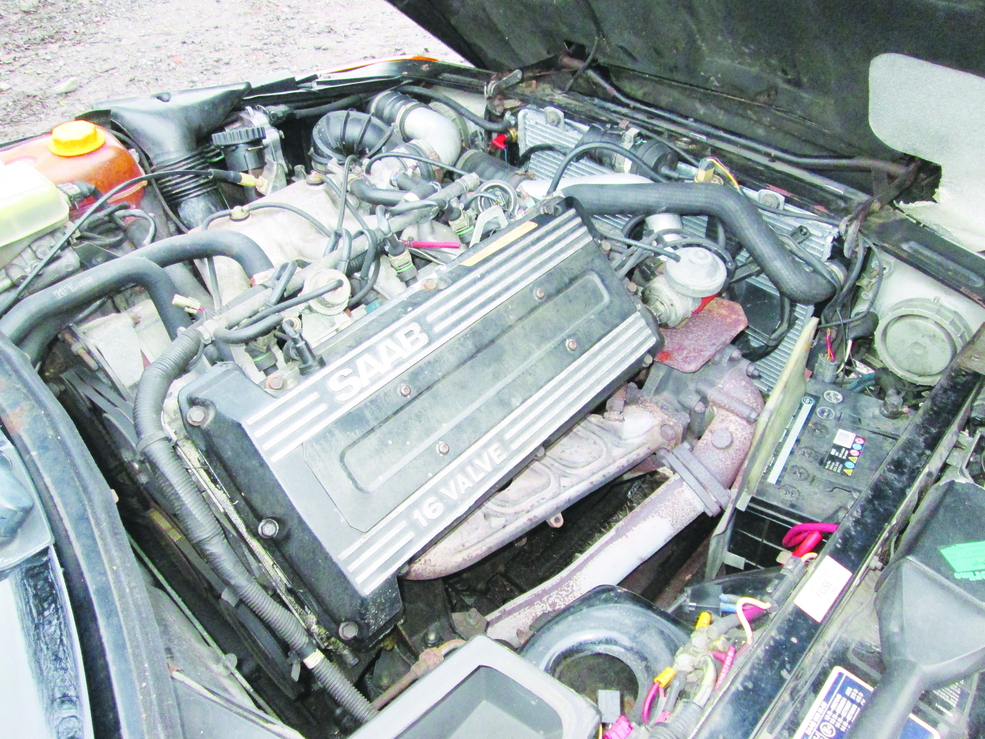 Turning the key releases the gearshift lock, allowing you to shift out of reverse and the fuel injection which was standard on all Saab turbo engines sees the engine fire immediately with that characteristic drone.

The interior ambience is unique to the Saab, with the high-set dashboard and wraparound windscreen which supposedly echoed Saab’s aerospace beginnings, while the seats are superb on longer trips, with their orthopaedic design and built-in headrests. The chunky switchgear is Lego-like in its design much as you’d find in a Discovery and like the Land Rover, it’s all designed to be operated with gloved fingers.

The gearshift is typically 1980s front-drive, the floor-mounted lever having a long throw and slightly remote-feeling action but it’s precise enough and the classic 900 enjoys a smooth hydraulic clutch which was swapped for a cable in the later Vectra-based cars.

A laggy power delivery is a trademark of ’80s turbo cars and the surge of boost was something which contributed to he excitement of cars like the RS Turbo and 5 GT Turbo, making them feel quicker than they really were. The 900 by contrast offers a smoother power delivery, thanks in part to Saab’s adoption of electronic boost control under the tag Automatic Performance Control (‘APC’) to govern the three fundamental parameters of ignition, fuelling and boost.

By late ’80s standards, a 175bhp output from a 2-litre, 16-valve turbo was also relatively conservative when Ford’s Cosworth engine was producing over 200 bhp from a similar spec.

The result is that the car is surprisingly easy to drive in everyday use and also in brisk cross-country sprints – there’s sufficient off-boost torque to mean it seldom flounders at low speeds like a modern turbodiesel, yet when the APC needle shows boost start to build, it feels nicely brisk.

it’s not as aggressive as the more powerful Aero and Carlsson models which would come later but is brisk enough to be fun and offers performance roughly on a par with something like the contemporary BMW 325i. 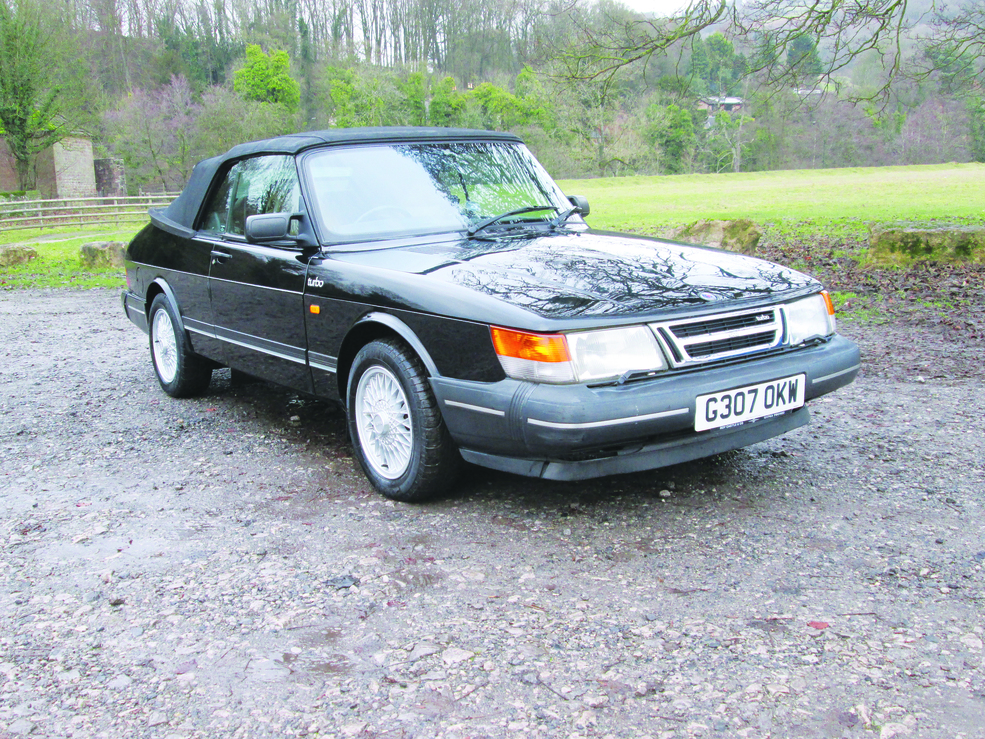 When it comes to the bends, Saab’s efforts to reduce the front-end overhang have paid off, since the Saab handles neatly with understeer which builds gradually as you push it harder and not a hint of the tail wanting to step out, either – perhaps a welcome bonus from the extra rear-end weight added by the convertible roof.

Back in the day, road testers complained of the Turbo 16’s torque steer but with the benefit of hindsight, this seems rather harsh. Even under hard acceleration from a standstill it’s manageable and certainly less than you’ll find from many high-powered 1990s front-drivers.

As for the rest of the experience, the power top motors up and down smoothly and with the roof down, the 900 is a very pleasant way to travel. As always, a fold-up wind blocker makes a big difference to comfort levels if you don’t need to use the rear seats, but even with four people aboard, that high rear deck does usefully reduce the buffeting at speed.

It all adds up to a very practical and usable modern classic – even if the term modern is a slight misnomer now that these cars are all approaching their 30th birthday. If you fancy a quirky four-seater and you’ve been priced out of the XJ-S and BMW E30 then the Saab makes a great case for itself.