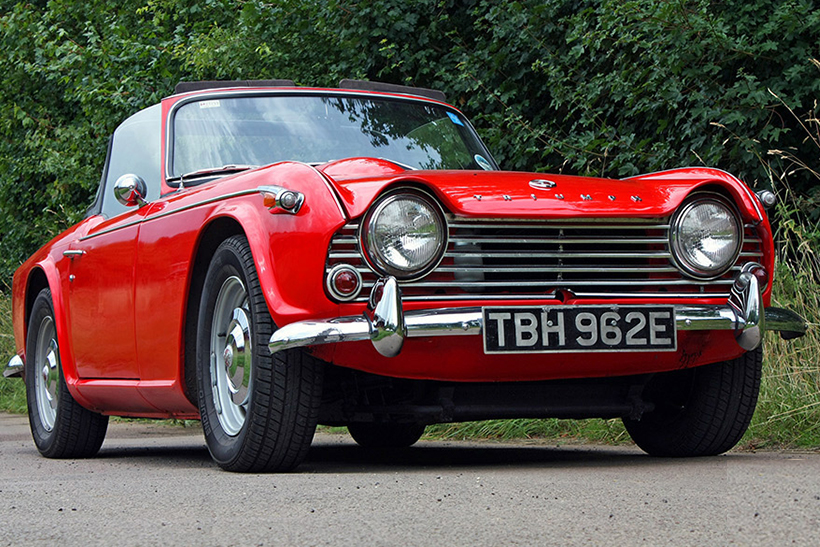 Offering a delightful mix of Italian styling and British roadster values, the TR4 and TR4A have never been a more popular buy.

On the face of it, the TR4 was a massive leap forward from the low-hipped TR3A that preceded it. Thank Italian stylist Michelotti for that. Under the skin, things were remarkably familiar, but no worse for it. The lusty four-cylinder engine had been stretched to 2138cc and steering was now by rack and pinion for greater feel and accuracy, but otherwise the chassis remained very similar. That meant good old leaf springs at the rear and a ride that is best summed up as ‘traditional’.

Other benefits included an all-synchromesh gearbox and the options list included a brake servo and a hard-top with a removable roof section. This is often referred to as a ‘Surrey Top’, but in fact that nametag only originally applied to a vinyl section that could be used in poor weather if you had left the main roof panel at home.

INDEPENDENT THINKING
The TR4 was superseded by the TR4A in 1964. Large sidelight/indicator units on the front wing corners were the biggest styling cue to the change, though a large IRS badge on the bootlid hinted at the changes beneath the skin. This time, the looks remained little changed but major changes occurred for the rear suspension. The chassis was revamped to allow the fitment of a fixed differential unit and fresh mounting points for the semi-trailing rear suspension – which now used coil springs. These cars are still quite stiff, but feel more stable over broken surfaces.

Be aware that wary of upsetting the traditional fan-base in America, Triumph equipped some US TR4As with the old leaf-spring live axle – though it used the later chassis and therefore had to re-engineer it to take leaf springs! Most customers were happy to accept the changes however.

Also worthy of note are the Dové (note the accent) GTR4s converted by Harrington. These stylish fastbacks are particularly pleasant and with less than 100 built are very rare. Built between 1961 and 1964, a handful of these were TR4A based.

The upward trend for British roadster values has most noticeably dragged up TR5 values – a TR4A with six-cylinder power. That trend is now lifting the four-cylinder TRs too, still a lot cheaper than a Big Healey or even an MGA these days. You might fancy the extra urge and bellowing six-pot soundtrack of a TR6, but these earlier TRs have more attractive lines and a fabulously rorty exhaust note of their own.

BUYING ADVICE
BODYWORK: Panel alignment is the first thing to check. If it’s woeful, why is that? Is there accident damage beneath the surface? Has a restoration been bodged or carried out by someone who hasn’t got much of a clue? Gaps should be uniform. If all is well so far, then start checking for corrosion. It can strike pretty much anywhere. Open the doors, checking their fit and examine the sills. There may be a separate chassis, but sills are still vital to hold the body together properly. Sills cost around £120 a pair, but that bill can zoom up to £1200 per side once you factor in the inevitable further restoration work as rot is chased out of the floor, plus preparation and paint. It certainly pays to check carefully. Door fit is the real giveaway to how well a restoration has been carried out. If they’re difficult to open or close, that’s a mark against the car. You need to carefully consider what other restoration work has taken place.

Look carefully for bubbles in the paintwork that hint at corrosion beneath. Be especially careful where panels meet – such as the wings to the body. Get down low to check the front and rear valances. Ideally, you need to raise the vehicle so the chassis can be inspected. The front is usually protected by leaked engine oil, but you need to check for stress cracks around the suspension mounts as well as kinks from accident damage. The rear is more of an issue though: Whether a TR4 or TR4A, you need to inspect the chassis all around the suspension (and differential mounts on the TR4A) very carefully. Watch also for rot in the front crossmember, gearbox and engine mounts and outriggers. Repairing the chassis isn’t too problematic, but may require the body to be removed, which inevitably leads to further rot discovery.

Other areas to check are the inner wings, bulkhead and boot floor. If checking a Dové, matters are complicated by the glassfibre roof. They’re trickier to restore.

ENGINE: The engine does indeed have its roots in the 1850cc engine used in the Massey Ferguson TE20 tractor, but why see that as a bad thing? Designed for torque, it has a very strong bottom end with long-lived bearings. A worn bottom end will eventually knock, or cause low oil pressure, but these engines really are very hardy and 150,000-pluis miles should be no problem. Because of the torque on offer, you don’t need to rev them particularly hard – even though the car versions were surprisingly different to the tractor application. Carburettors were SU until late 1962, Stromberg from then on. Stuck needle valves can cause fuel leaks and poor running, but ignition faults are generally easily overcome. Keep an eye on the temperature gauge though. Neglected cooling can cause the radiator and block to silt up. If rebuilding isn’t up your street, expect to pay £3000-4000 for a reconditioned engine depending on tune. However, if you like to crack the tools out, it’s not a bad engine to work on at home.

RUNNING GEAR: The gearboxes are rather notorious for layshaft whine. If the gearbox is noisy, but goes quiet in top, the layshaft bearings need replacing. Once the layshaft is out, you may as well rebuild the whole thing. Watch for failing synchromesh too – first and second being the primary candidates. Quick gearchanges, especially down the gears, may highlight any issues. If overdrive is fitted, check that it works swiftly on second, third and fourth gears, though failure to engage is often either just an electrical fault or even low fluid in the gearbox. A gearbox rebuild typically costs from £500 upwards depending on what is needed. Most specialists would charge around £300 on top for removal and fitting. Be aware that overdrive was very rarely fitted to TRs bound for America.

Listen out for rear axle noise too. A tired differential will howl, though it can survive for a long time in this state. Clonking on tight turns on a ‘4A suggests that the universal joints on the driveshaft are in need of replacement.

The steering should be free of play and be very accurate. Anything less suggests wear, so it’s a case of finding it. A worn rack will cost around £100 to replace, but do note that while early cars had the rack solid-mounted to the chassis, later cars used rubber mounts, which degrade and allow some sogginess to creep in. A worn rack usually creates clunks, but free play is usually down to tired trunnions. These need regular attention with a heavy oil – not grease. A complete overhaul kit costs £163 through Rimmer Brothers and it repairs both sides.

Brakes are by discs at the front and drums at the back. Make sure the car pulls up swiftly without pulling to one side. Pads are £25 upwards, shoes a little cheaper. Handbrakes were always on the feeble side so don’t worry if it seems a little weak, but do leave the car in gear when parked!

INTERIOR & ELECTRICS: Reviving a tired interior can be more expensive than you might expect. Even doing the work yourself, you can expect a bill for over £200 for vinyl trim, or over £400 if you fancy the luxury of leather. Therefore, don’t overlook a cabin’s condition. Carpets need checking for dampness – expect another £200 wallet hit if it needs replacing. Check the hood’s condition too – that’ll be another £250-600 depending on what material you fancy.

Note that originally, a white metal dashboard was standard fitment. There are an awful lot of TR4s out there with wooden dashboards now – either complete replacements or ones that fit over the metal. In either case, make sure you’re happy with the quality.

You need to be wary of the electrics. Some cars have positive earth, which will play havoc with any modern kit you try to fit. Many have been converted to negative earth and some now sport alternators – optional on the TR4A anyway. Checking that everything works shouldn’t take long though. The only real issue is a seized wiper linkage as you’ll need to remove the dashboard to remove and repair it.

WHAT TO PAY
Over the past few years, prices have been rising strongly. Usable TR4s start at £10,000 and you can get a pretty decent example from £15,000, but the very best TR4As are now knocking on the door of £25,000 and really tidy TR4s are not far behind. That’s quite a wide range of values, and how much you pay depends on condition and originality. Buyers really want UK market cars that haven’t been meddled with. Harringtons may be rare, but they’re not currently commanding much of a premium. Bonhams sold a restored one for £20,700 including premium – about what you’d expect for a nice TR4 in similar condition. The Dové’s looks are not universally admired it seems. Projects range from £6000-10,000 depending on what’s needed and the country of origin. Cars are still finding their way back from across the Atlantic.