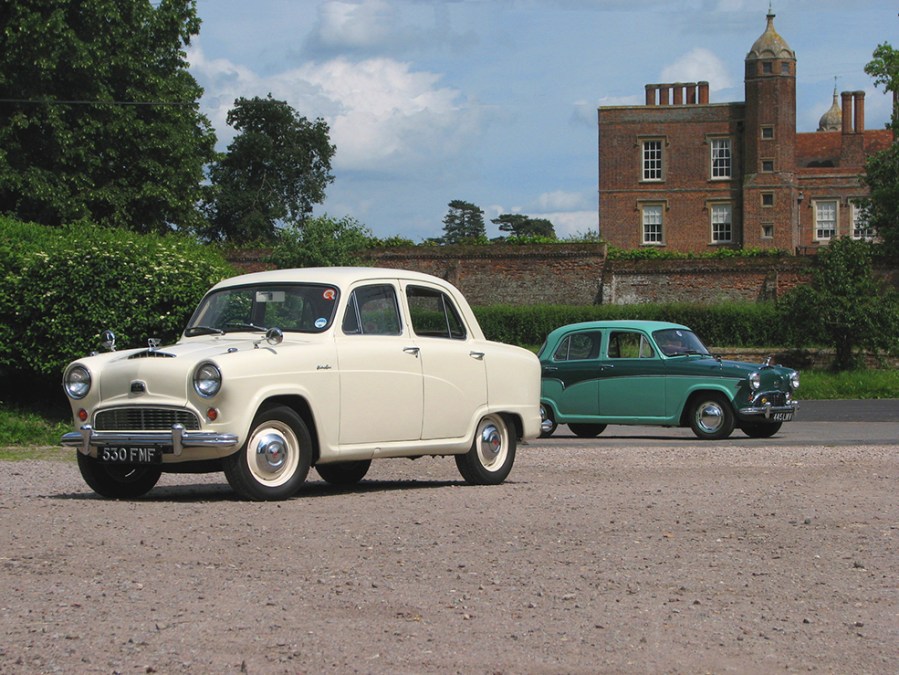 A brand-new town has risen phoenix-like from the demolished assembly halls and ad hoc buildings that once made up the sprawling Longbridge production complex where this selection of classic Brummie-built favourites was created.

Longbridge unveiled its first automotive legend, the Austin 7, in 1922 and for almost 100 years the plant churned out thousands of cars to suit all tastes and budgets. Several models like the Mini went on to become national institutions, but too many Longbridge products were sadly under-developed and never achieved their full potential. However, despite a seemingly never-ending series of strikes during the disruptive ‘Red Robbo’ days, Longbridge managed to produce more heroes than villains before the plant’s massive assembly halls fell silent in 2005. 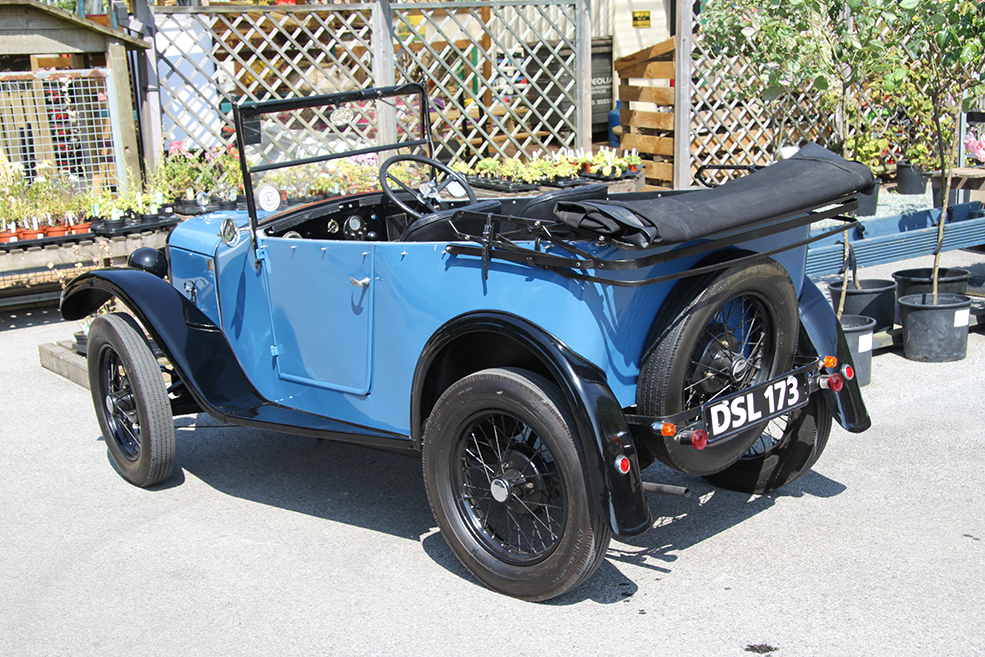 Introduced in 1922, the Austin Seven was produced in several variants including saloons, open tourers, sports cars, light vans, pick-ups and flatbed trucks. Early examples were powered by a four cylinder, 696cc side valve engine, later enlarged to 747cc in 1932.

Early examples, known as the Chummy, provided just enough space for two adults and two small children wedged onto the back seat. The Seven even went upmarket when coachbuilders such as Jaguar founder William Lyon’s Blackpool-based Swallow company produced a variety of interesting body styles built on the little Austin’s chassis. Stripped out Ulster versions went racing and by 1932, the year all Sevens were fitted with a four-speed gearbox, the most popular version was the stretched ‘Box Saloon’. In 1934 Austin launched the more curvaceous Ruby saloon and other variants included the Opal two-seat tourer and the Pearl cabriolet. The final Seven Austin was the Big Seven in 1938 but this didn’t prove popular and by the end of 1939 production had ceased when Austin’s manufacturing facilities were turned over produce materials for the war effort. 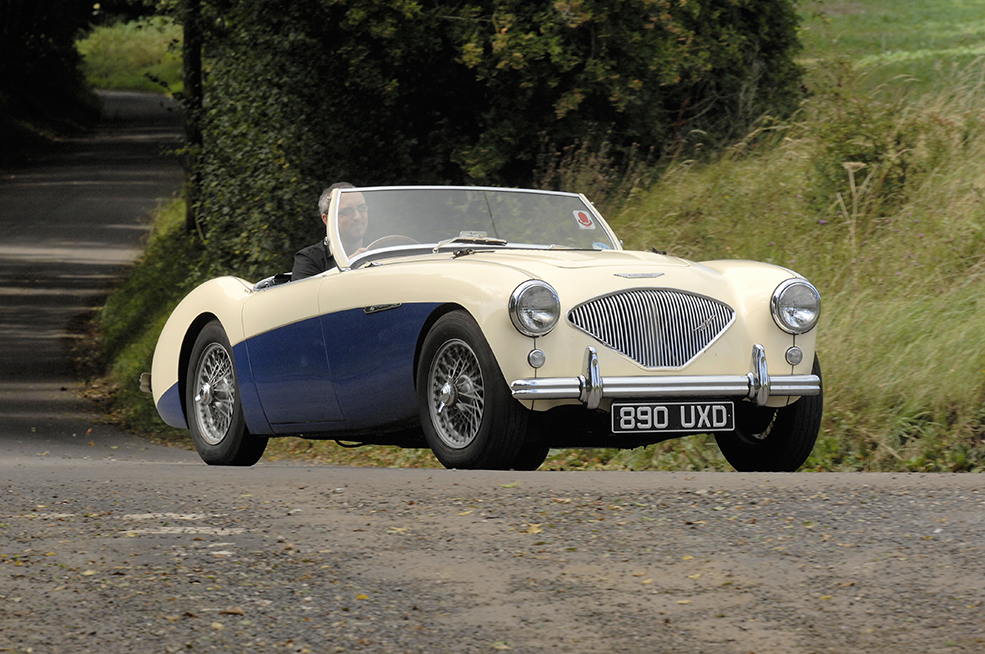 BN1 series Austin-Healey 100-4 production got underway at Longbridge in 1953 after Austin boss Leonard Lord successfully negotiated a deal with Donald Healey to produce this now legendary sports car in huge numbers after seeing a prototype Healey Hundred displayed at the previous year’s London Motor Show. Power for the hairy chested 100-4 was provided by the same 2660cc OHV inline four found in the A90 Atlantic saloon. Although the BN1’s engine was mated to a four-speed gearbox, the lowest ratio was blanked off and the car’s oddly cranked floor-mounted lever only operated on the top three forward gears and reverse.

Fully trimmed and painted bodies for the twin SU fuelled Austin-Healey 100-4 were produced by West Bromwich-based Jensen, with the final assembly taking place Austin’s Longbridge plant. This very capable sports car proved a massive hit on the other side of the Atlantic and the majority were shipped stateside to earn vital export currency. In 1955 the revised BN2 Healey 100, now with a fully working four-speed gearbox, built on the earlier car’s success but even motoring legends like the 100-4 have their superheroes. In this case, it’s the 100S (‘S’ standing for Sebring), a limited production version specially prepared to go racing. Six-cylinder power increased the big Healey’s appeal when the BN4 100-6 broke cover in 1956. 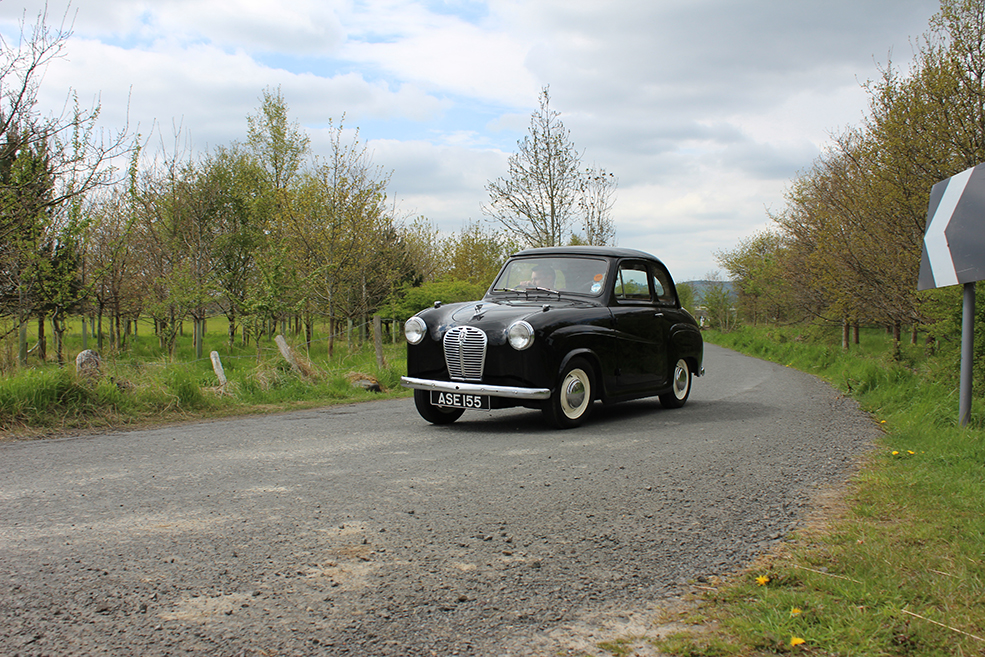 Although the back to basics A30/A35 can hardly described as a motoring legend, the A30 was an important car for Longbridge as it was the first Austin to feature a unitary constructed body and under the bonnet was a brand-new overhead valve 803cc engine that would go on to be known as the A-Series. The A30, which was available as either a two-or four door saloon and a practical two-door station wagon, looked like a larger version of the similarly styled but body-on-frame constructed Austin A40 Somerset. In 1956 Austin unveiled the more refined A35 powered by a larger 948cc A Series engine and by now the A35 was also being offered as a five hundredweight panel van and now very rare pick-up. Production of the two and four-door A35 saloon continued until the Spring of 1959, a few months after the introduction of another fondly recalled Longbridge product – the Farina styled A40. 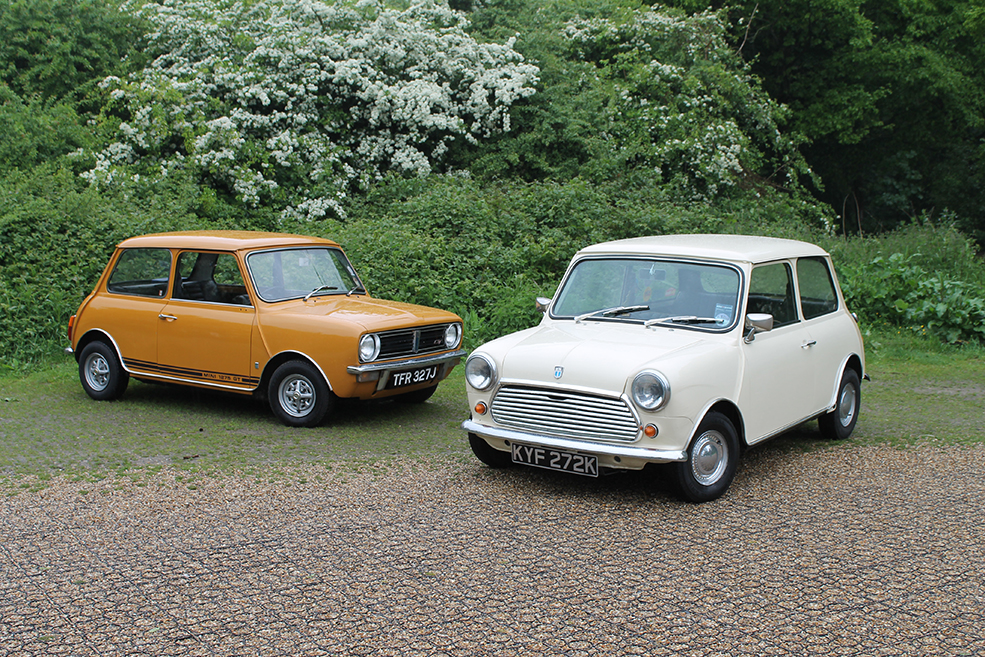 The Mini requires no introduction as a motoring legend and the first example of what would go on to become the nation’s favourite car was built at Longbridge in 1959. With 80 per cent of the car’s tiny footprint devoted to passenger space, the Mini quickly established itself as a classless style icon. It was certainly a radical design for the day and the Mini’s compact dimensions had been achieved by packaging the gearbox into the sump and mounting the drivetrain transversally in the engine bay to power the front wheels. Early examples sat on innovative rubber suspension, which would be swapped in 1964 for a ‘wet’ Hydrolastic set-up, an even more radical design for such a small car.

Over a 41-year production run, a total of 5.4 million Minis rolled off assembly lines in a variety of plants as well as Longbridge, an impressive figure that still remains unbroken for a British designed car. This was just one of a shed full of records and awards clocked up by the Mini over the years and although a mid-‘60s 848cc A-Series powered Austin Seven or Morris Mini-Minor is regarded as a true Longbridge Legend, the mildly warm Cooper and red hot Cooper S 1275 went on to take that status to a superhero level. While a Mini Cooper S was being prepared to win the 1964 Monte Carlo rally, the Mini had gone upmarket with the introduction in 1963 of the booted and smartly kitted out Riley Elf and Wolseley Hornet and BMC had even tempted the British Army with the stripped out Moke.

By now the Mini range offered a range of different engine sizes and body styles that included the Countryman/Traveller estate, panel van and pick-up. In 1969 the Mini range was boosted with the introduction of the square fronted Clubman but by the late 1970s and, against all odds, the Mini managed to live on through the troubled BL days. It was still in production when BMW took over the ailing Rover Group in 1994. 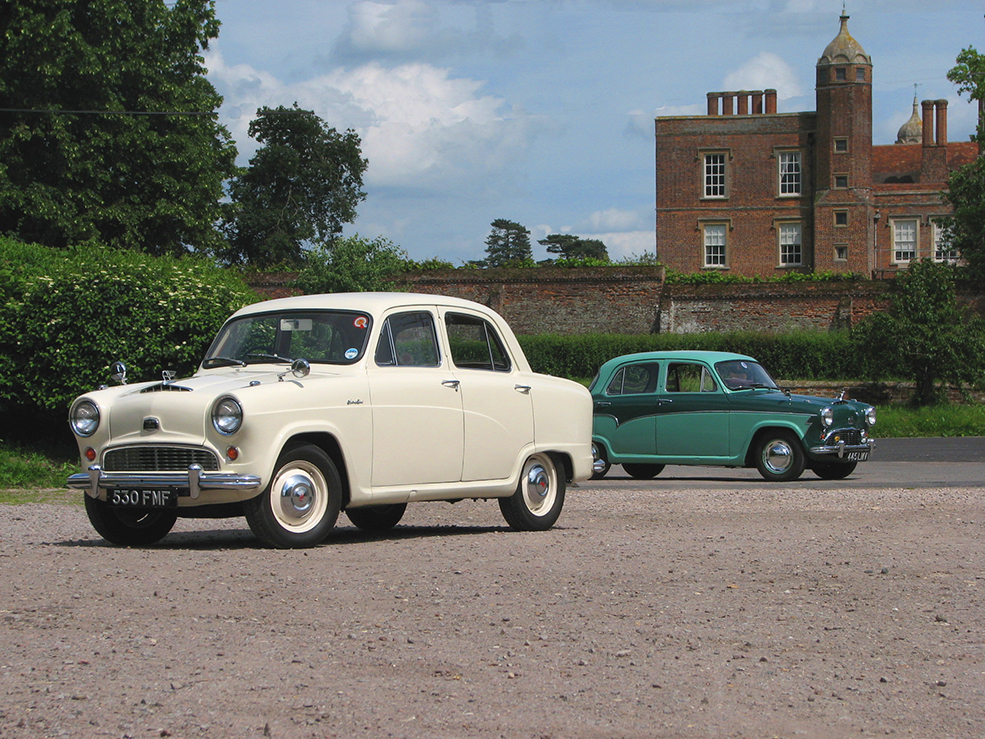 A car synonymous with the Austin badge and the Longbridge plant was the Cambridge, a name that was applied to several generations of four-door saloons and estate cars from 1954 through to 1971. The unitary constructed 1.2-litre A40 Cambridge was the first of the breed together with the 1498cc A50 and from 1957 the similarly powered A55, identified by its larger rear window and bigger boot, expanded the range. A series of half ton vans and pick-ups were produced and in 1959 the A55 was replaced by the larger Mk2 Farina styled A55 Cambridge.

Power for the Farina styled Cambridge came from the earlier models’ 1.5-litre B-Series engine. A practical Countryman estate version was introduced in 1960 and the heavily revised A60 Cambridge came along the following year. Revisions for the new Farina included increasing the car’s rear track and wheelbase and adding anti-roll bars to improve handling, while styling tweaks reduced the size of the car’s rear wings. Fitting a 1.6-litre version of the B-Series engine increased the A60’s power output to a more useful 61bhp and in true BMC fashion, the Cambridge was badge engineered as the Morris Oxford, MG Magnette, Riley 4/72 and Wolseley 15/60, with production being shared between Longbridge and Cowley. 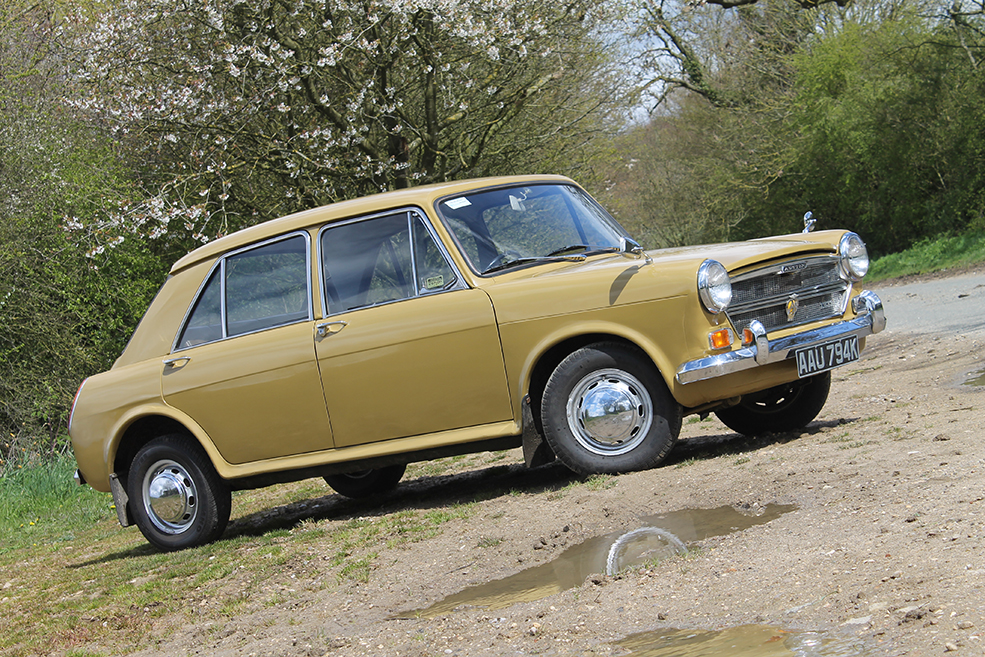 Originally a product of BMC’s Cowley plant, the 1962 introduced 1100 ADO16 1100 range of front-wheel drive medium sized saloons was one of the company’s rare success stories. Launched in August 1962, the Pininfarina designed and Longbridge developed Morris 1100 was joined later that year by the twin-carb fuelled 55bhp MG 1100 and in 1963 an Austin version joined the line-up. To cope with the ADO16’s runaway success, the relatively strike free Cowley plant had to work flat-out in conjunction with Longbridge – which would build the most examples – to satisfy demand for the 1100.

The 1100’s advanced Moulton designed Hydrolastic suspension provided a class leading ride and a transversely mounted 1098cc A-series engine drove the front wheels through a four-speed, sump-mounted gearbox. Over time, the badge engineered 1100 range would go on to include the upmarket Vanden Plas, Wolseley and Riley versions as well as the sporting MG. The technically advanced ADO16 even outsold the Ford Cortina for a while.

From 1967 all six ADO16 variants were offered with the larger 1273cc A-Series engine, a move that resulted with the more powerful versions being badged as 1300s, although the smaller engine was still offered in some versions. Late in 1969 the Austin and Morris 1300 GTs arrived on the scene fitted with the 70bhp big valve 1275cc engine that also powered the MG version. Production of the ADO16 range was slowly wound down throughout the early part of 1973 and this very capable old favourite was eventually replaced by the unfairly maligned Allegro.