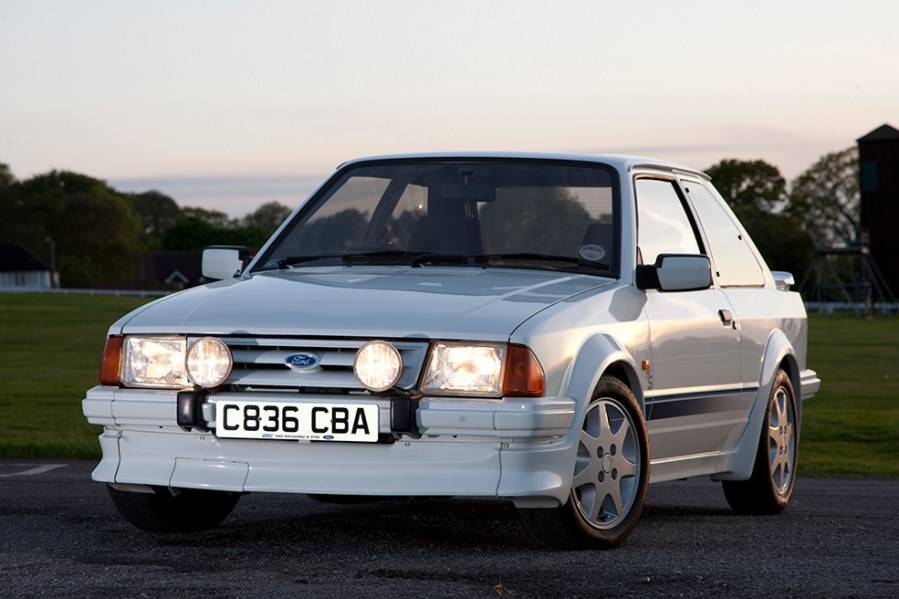 The 1980s produced some of the most over-the-top, good-to-drive, mechanically interesting cars ever. Here are our favourites

Some cars automatically speak for their eras. The Harris Mann school of design could exist in no decade outside the 1970s, just as the Anglo-Italian flair of the Farina range could only have been a late 1950s construct. The 1980s was a power decade on the surface, one in which greed was good and money was there for the taking, but also one where there was a vast divide between the haves and the have-nots.

Some cars transcended this owing to differences in spec. Both sides of the divide the Peugeot 205, the Ford Escort, the Volkswagen Golf held an undeniable appeal. But the halo models, the GTIs and the RS Turbos, spoke of the decade in a far more potent manner than any more humble model could ever achieve.

And as time passes, the people for whom these were automotive poster children have assumed the sort of disposable income that makes them a potential classic investment. These are the cars we always dreamed of, the cars we saved for – the cars that, today, command the same rose-tinted appreciation that the MGB enjoyed back when these were new. 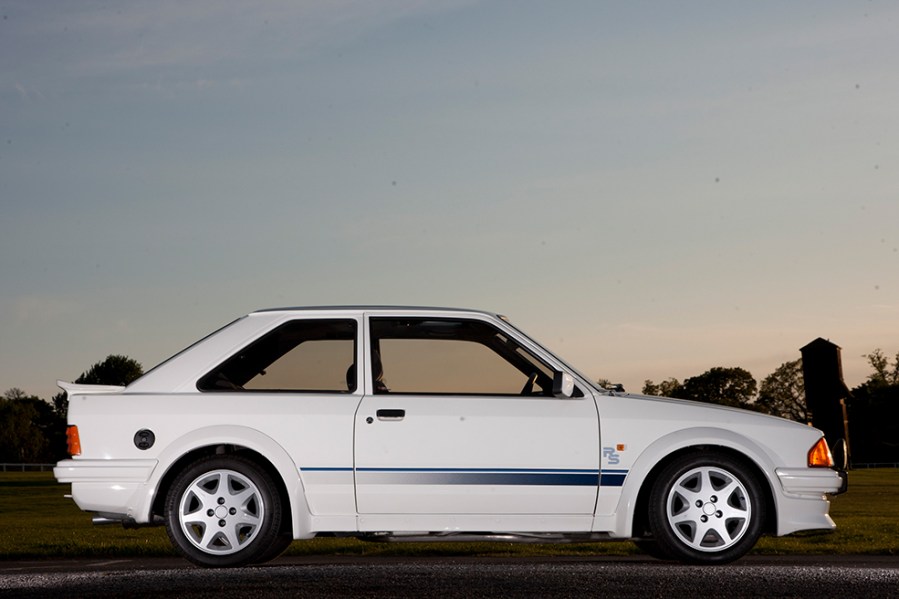 Beloved of Diana, Princess of Wales, the Escort RS Turbo was huge fun for what amounded toa Mk3 Escort. Hers was black and relatively understated with the standard Escort grille, in an attempt to show some discretion. But the RS Turbo we all remember wore white as it walked down the streets of your soul – and not only was it white, it was fitted with big RS alloy wheels, stripes, spotlamps and a three bar grille.

The first front-wheel drive car to be fitted with a limited-slip differential, the RS Turbo’s 1.6 litre CVH was tuned to shove 132bhp through the front axle. Inside there were Recaro seats with blue piping, and that rasping exhaust note was accentuated under hard acceleration with the whoosh of a turbocharger. Not that you could guarantee you were going to go in a straight line; the combination of heavy steering and violent torque steer under full acceleration made the RS Turbo one of the most amusing or terrifying hot hatches of its era depending upon your perspective.

The Mk3 RS Turbo can now command serious money, but the facelifted Mk4 with its subtler aesthetic and higher production numbers makes for a better bargain. It’s crucial though to remember that the cheaper the car, the poorer its return will be as an investment when you come to sell it on again. 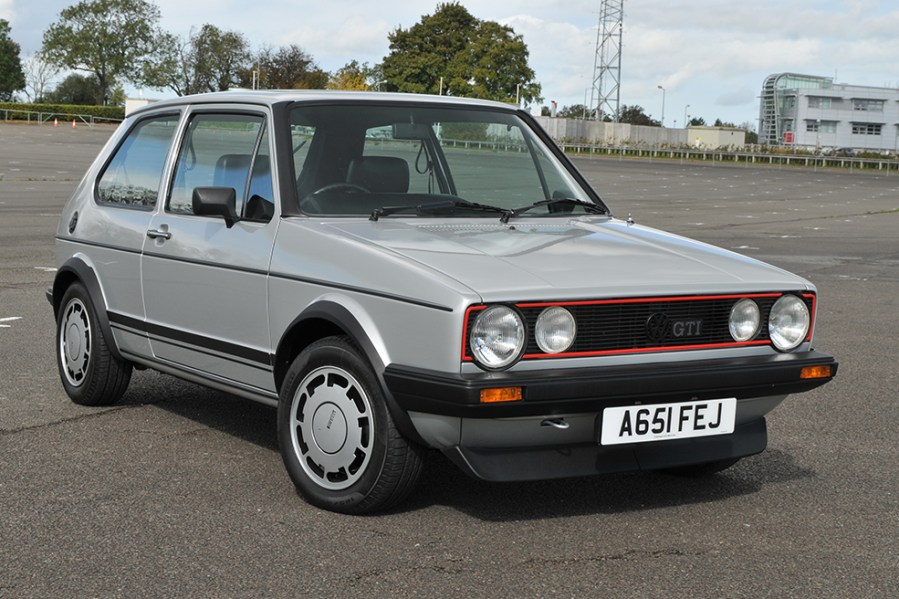 The Volkswagen Golf GTI wasn’t the first sporting family car. It wasn’t even the first hot hatch. But what it was was the first to popularise the concept, the trendsetter. The Golf sparked a raft of copycats from the Ford Escort XR3 to the MG Maestro and the Astra GTE. It’s easy to see why, too; the GTI wasn’t originally an officially sanctioned project but a skunkworks proposal by Volkswagen engineers. Top brass liked the car, planned a limited edition, but sales took off and every model of Golf since has been available in GTI form.

Launched in 1976 with a 108bhp 1.6-litre engine, the Mk1 GTI lasted for seven years of production across 1.6 and 1.8 litre variants, and the Campaign special edition. Lowered and stiffened suspension, a golf ball gearknob and a little red stripe around the grille were the only telltales on the outside of just what this car was capable of. 0-60 in under ten seconds made a mockery of sports cars like the MGB, while offering the sort of practicality that made cars of similar performance look unreasonably selfish.

Today, the Golf GTI makes a compelling classic buy – panels and trim are largely shared with standard Golfs, the mechanicals are simple and easy to maintain, and the popularity of classic Volkswagens means that maintenance is relatively easy. Get a solid example, and you won’t go far wrong. Better still, the values are still climbing fast. 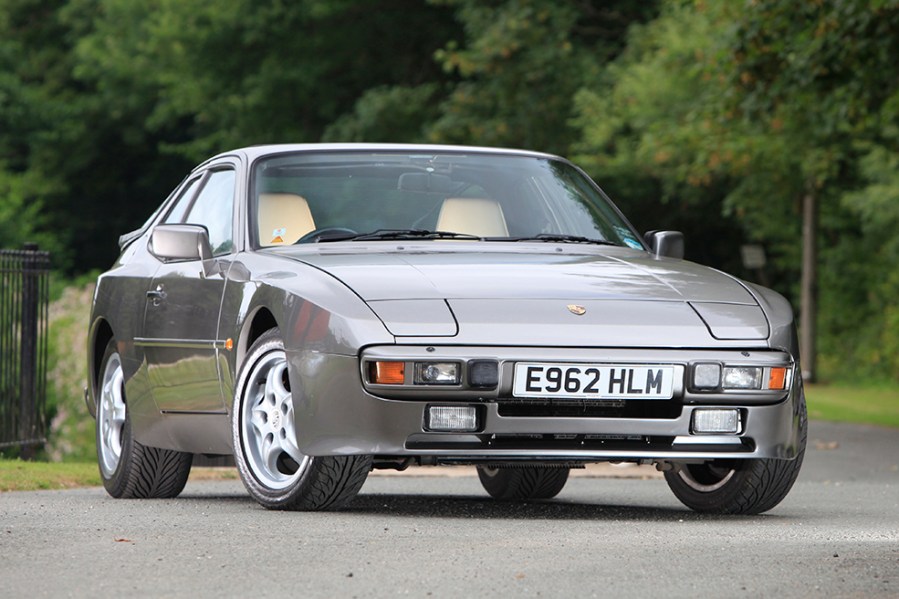 While the Porsche 911 is seen as the yuppie chariot of choice today, it was – Turbo excepted – a shade passé by the standards of the 1980s. The new and shiny car of choice was the slick, transaxle-equipped 944, with near perfect poise and balance and without the handling histrionics for which its air-cooled sibling was well known.

Launched in 1983 as a performance derivative of the 924, the 944 sported big flared arches, a Porsche-developed 2.5-litre engine and – optionally – a socking great turbocharger for those red brace bragging rights. Galvanised shells and a proliferation of Porsche people mean that keeping your 944 on the road isn’t as difficult as you might think.

And if it’s a car you find tempting, we certainly wouldn’t want to change your mind. Because there are few cars of any era with corner with such poise, which have steering so well weighted, which have such a precisely perfect gearbox. The Porsche 944 should be prescribed to people who want to know how a sports car ought to feel. And while they’re nowhere near as good value as they once were, they can still be found for under five figures. The later the car the better it will be, though early 2.5-litre examples do offer outstanding value for money. 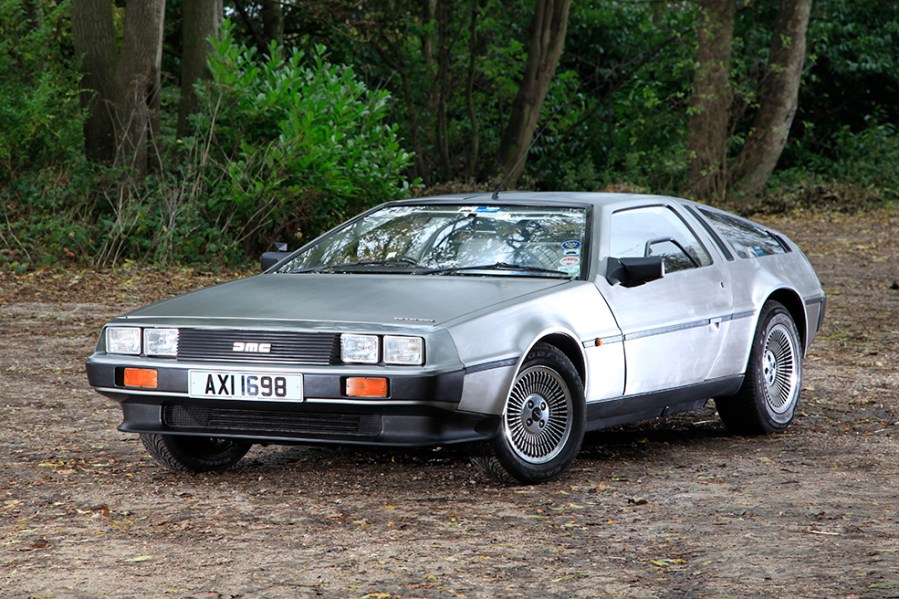 We guess that in the 80s people weren’t quite ready for the DeLorean DMC-12. But their kids loved it – and still do. The Back to the Future exposure might have opened up the DMC-12 to a far bigger market than it would otherwise have seen, but the story of the DeLorean would have earned it its own cult following even had the silver screen not taken to it. John Delorean’s ‘ethical’ sportscar with its rumours around finance from cocaine deals and being used as a money-laundering front by respected motor industry figures was always going to be the sort of car that attracted fans, even with its relatively feeble PRV V6 and its unpainted bodywork that attracted finger marks.

Built in Northern Ireland for just two years, the DeLorean is one of those cars that has long had more admirers than there are cars to buy, so if you’re serious about wanting one you’ll have to be quick. We recommend joining the club too, as you’ll hear about cars before they reach the open market.

Values are still climbing – not least because of the people who’ve converted some of the few cars into Back to the Future replicas, thus destroying their appeal to anyone who isn’t a fan of the films. Looking after one needn’t be as hard as you’d expect, given the realatively common mechanicals. And it’s one of the surest investments in the classic car scene – even if the market drops, film enthusiasts will keep DMC values high. 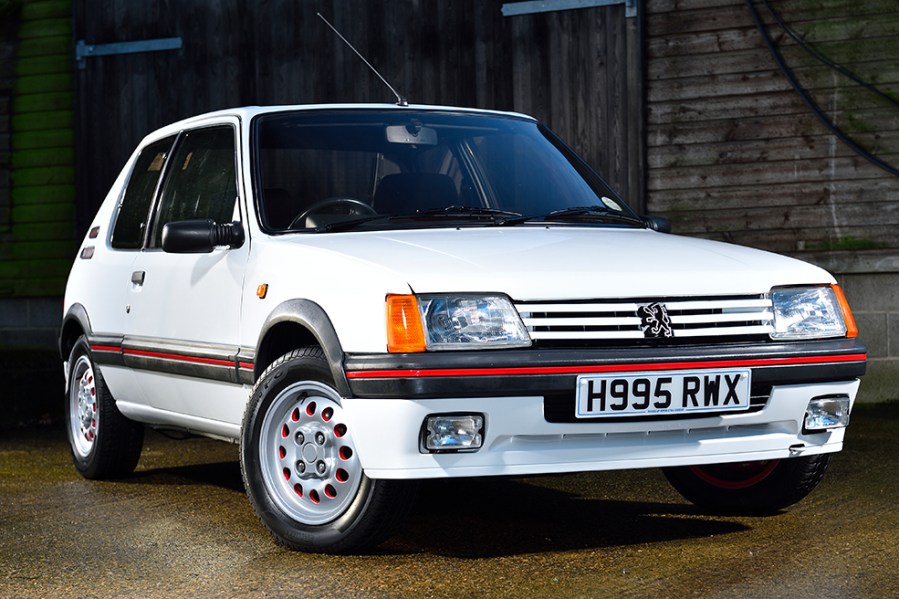 When the hot-hatch wars of the 1980s were in full swing, it barely seemed like a month could go by without one of the motoring magazines claiming that the latest thing had “stolen the Golf GTI’s crown”. And every month, after this supposed victory, the crown would somehow revert to the Golf just in time to be stolen by the next pretender. But those in the know always knew that the crown had been surrendered to just one car; the Peugeot 205GTi.

The little Pug married perky style to a sprightly engine – a 110bhp 1.6 in the early cars and a 130bhp 1.9 in later models – all of which were lighter than the Golf and therefore faster. Known for cocking a wheel at the limit, the Peugeot’s handling outshone the Golf with ease – and so what if the quality of the plastics was a little sub-par? The 205 was the in car. For ultimate 1980s points, try to find a CTi convertible – the ultimate oxymoron, a hot hatch which eschewed the hatchback preacticaltiy to reinstate the open roof of the sportscars that the hot hatch had killed off in the first place.

Values for the 205 GTi have gone haywire in recent years, especially when you consider that barely a decade ago you could still buy a usable example for under £1000. But they are still rising – if you can afford to buy one today, it makes a highly amusing alternative to an ISA. 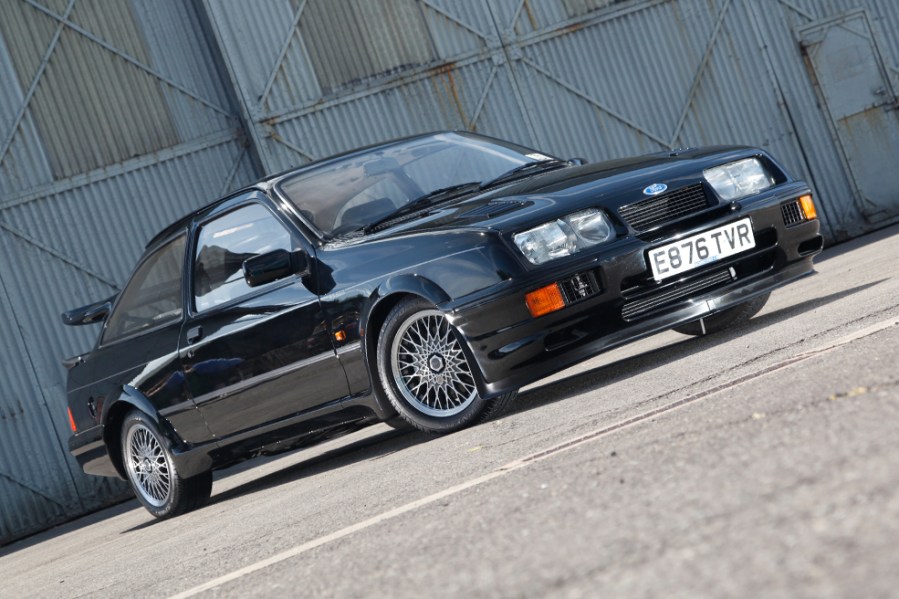 Some cars transcend their eras to become all time greats. That’s the case with the Sierra RS Cosworth. Planned to put Ford right back into the middle of motorsport by new Head of Motorsport Stuart Turner in 1983, the plan was to produce a high output Sierra. When Cosworth presented its YAA project to Ford, the two concepts were married together. The YAA had been based around the Ford Pinto – and led to an official order from Ford for a high output engine with a minimum of 180bhp and potential for up to 300bhp in race spec.

Cosworth responded with conditions; the engine had to produce at least 204bhp in road tune and Ford must accept 15,000 engines. This suited Ford, and development ensued. Ford had only made plans involving 5000 engines, but the remaining units would come in handy when Ford decided to replace the three door Cosworth with a Sapphire-based variant.

The 2WD Sapphire is the best value of the bunch, though the four-wheel drive of the later Cosworths is useful for grip – unless you’re a serious collector it’s probably best to steer clear of the three-door variants as they’re vastly more expensive for what amounts to the same car to drive. The Sapphire is actually a shade stiffer, making it a more entertaining car as well as a more practical one. 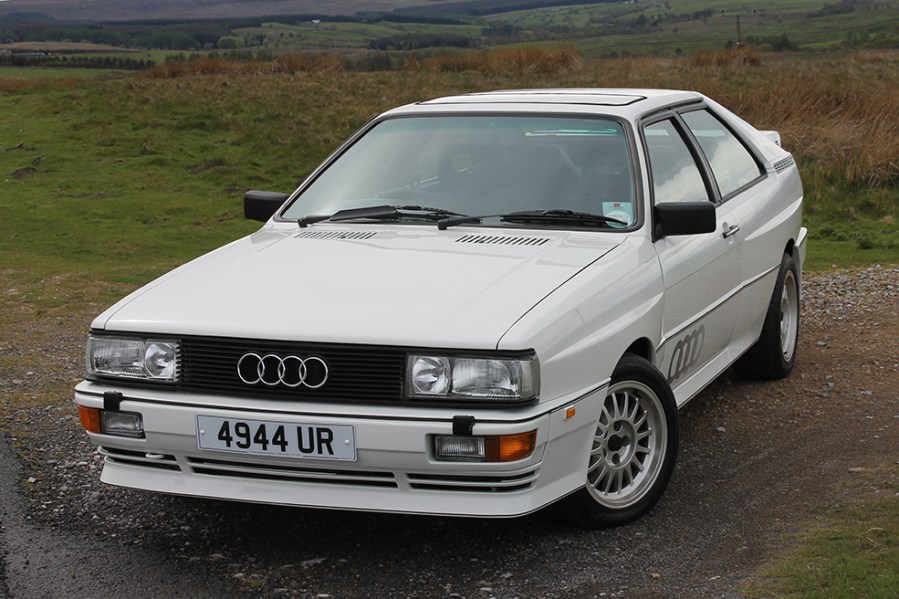 There’s a very good reason why when the creators of Life on Mars wanted to bring Gene Hunt crashing into the 1980s, they had him steeping out of a Mars Red Audi Quattro. That reason is this: That the Austin Metro just wasn’t cool enough, despite being the other automotive shining light of 1980. And while neither of the cars used in filming was sufficiently early to have been historically accurate, the fact remained that the Quattro spoke of a decade of excess like few other cars.

If you want one – as we think you should, even if you’re not quite sure yet – buy the car with the best trim you can – mechanical parts are all mendable, but trim can be difficult to get in good condition and it’s worth getting the most original and tidy example you can find. Like the DeLorean though, the car’s pop-culture fame ensures that whatever happens to the classic car market the Quattro should remain a safe investment. 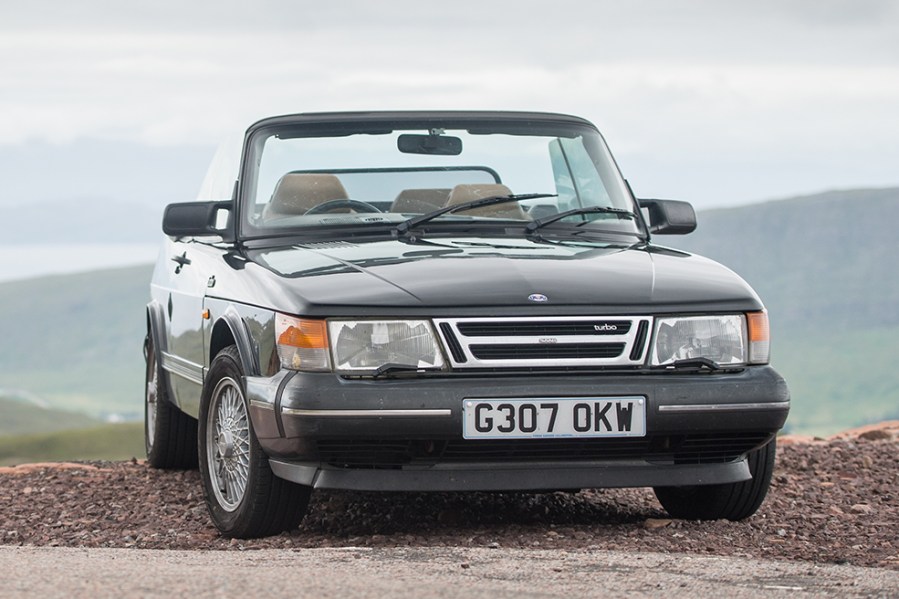 While the Saab Turbo has its roots in the 1970s, it is without question that the 900 Turbo is seen as a car of the following decade. Its use as James Bond’s cars in the first official novels following the death of Ian Fleming certainly helped; the cleverly modified ‘Silver Beast’ ensured that a generation of car enthusiasts would find the turbocharged Swede an appealing prospect.

Saab also had a solid image and perceptions of reliability on its side, two things which ensured it was bought by the sort of person who looked after and kept their cars for several years. This is why there are so many 900 Turbos left today – they managed to avoid banger status. And the best bit is, that the qualities that ensured these cars were kept and enjoyed for longer than average terms when new make them excellent modern classics for regular use today.

A 900 Turbo offers upwards of 30mpg alongside grin-inducingly addictive acceleration. Specialists such as SAABits can offer almost anything you need to keep your 900 on the road, and given that a reasonable example can still be had for a reasonable price with a choice of hatch, saloon or cabriolet bodystyles, the 900 is arguably the best value car on our list today. It can’t stay that way for much longer, however.