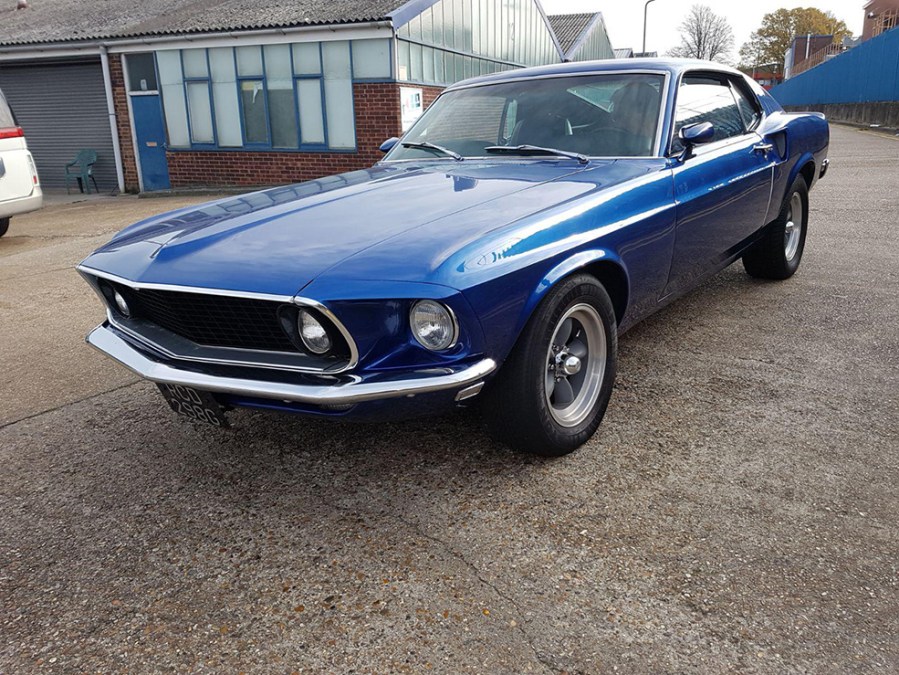 FORD MUSTANG (1967-1968)
The most desirable and valuable of the first-generation ‘Stang are those from the 1967 and 1968 model years. These yearas represents the sweet spot, with the car’s classic style and compact (by American standards) size teamed with much better cosmetic, interior and mechanical specifications. Buyers could opt for a two-door ‘notchback’, a fastback (a 1968 fastback in GT specification became famous for all time for its role in the film ‘Bullitt’) and a cabriolet. A total of four engines in five capacities and 13 different power outputs (from a 3.3-litre ‘Thriftpower’ straight six of 115bhp to a 335hp ‘CobraJet’ 7.0-litre V8) were available.

Naturally all the 1967/68 Mustangs available in this country are imports, and there is no shortage of firms able to source and supply cars from across the pond. Buying from the USA gives you a wider choice of cars with more variety in specification but with much more varied condition. Prices Stateside are generally higher even with the exchange rate factored in. On the UK market these Mustangs have fairly steady values with only a slight rise over the past five years or so. Value aggregator The Market put the average price of a 1967/68 Mustang at £25,000 in 2014 and £28,000 at the start of this year. Since then it has recorded a single sale of a car for £50,000, which puts 2018’s average off to a very high start, but that was almost certainly a Shelby, ‘Rally-Pac’ or CobraJet car – such specialist models sit in a very different price league. 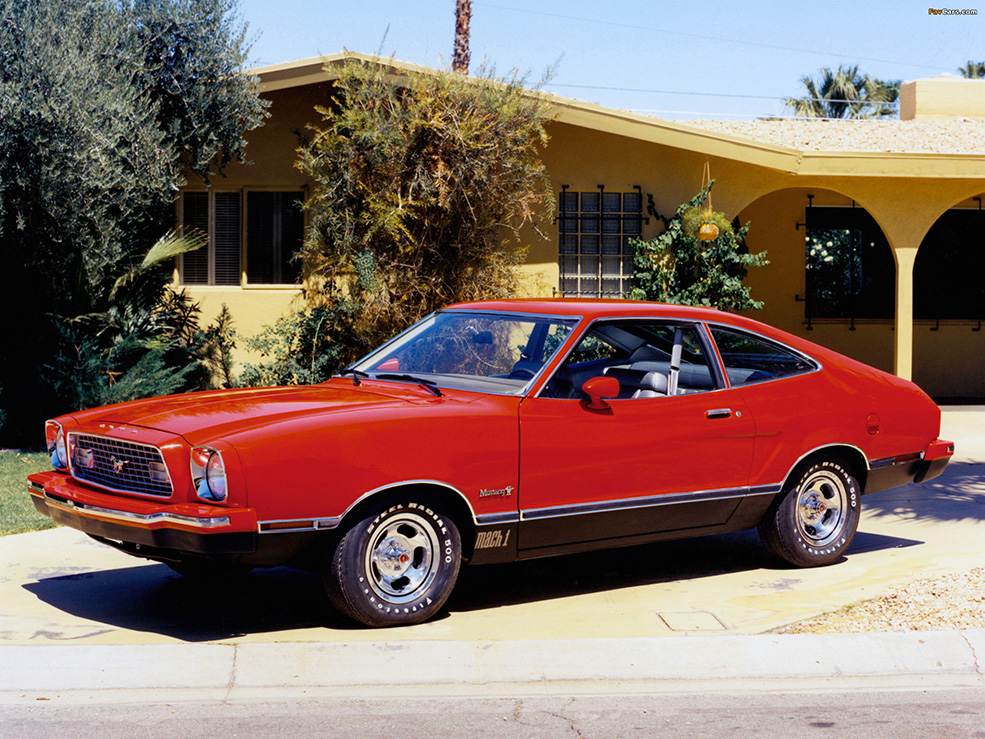 FORD MUSTANG II (1974-1978)
Ford astutely decided to base the second-generation Ford Mustang on the platform of its Pinto compact car and the car launched right into the aftermath of the Energy Crisis. Gone was the earlier Mustang’s high-octane image and hot-rod performance variants – the Mustang II focused on luxurious and highly-customisable cruising. Styling was by Ghia and the only engine was a 2.8-litre Cologne V6. For 1975, with the Energy Crisis receding and in response to customer demand, Ford added a 4.9-litre V8 (making only 140bhp) and a 2.3-litre four-pot engine to the range. Ford gradually tried to inject some of the old muscle back into the Mustang with the ‘Stallion’ styling pack in 1976 and the limited-edition ‘King Cobra’ V8 in 1978.

Despite its commercial success (1.1 million were sold in four years) enthusiasts have largely spurned the Mustang II until recently, even in the UK where the car’s smaller size and (relatively) good economy make a certain amount of sense. In 2014 values were down at £5000 and while other prices boomed even two years ago the average sale price of a Mustang II was just £6500. As the market for earlier Mustangs has overheated and with a general rising in stock for 1970s cars, the values for the Mustang II have climbed – last year’s average sale result was £12,000 and so far this year it’s £20,000, putting it on a rough par with the other classic Mustang models. 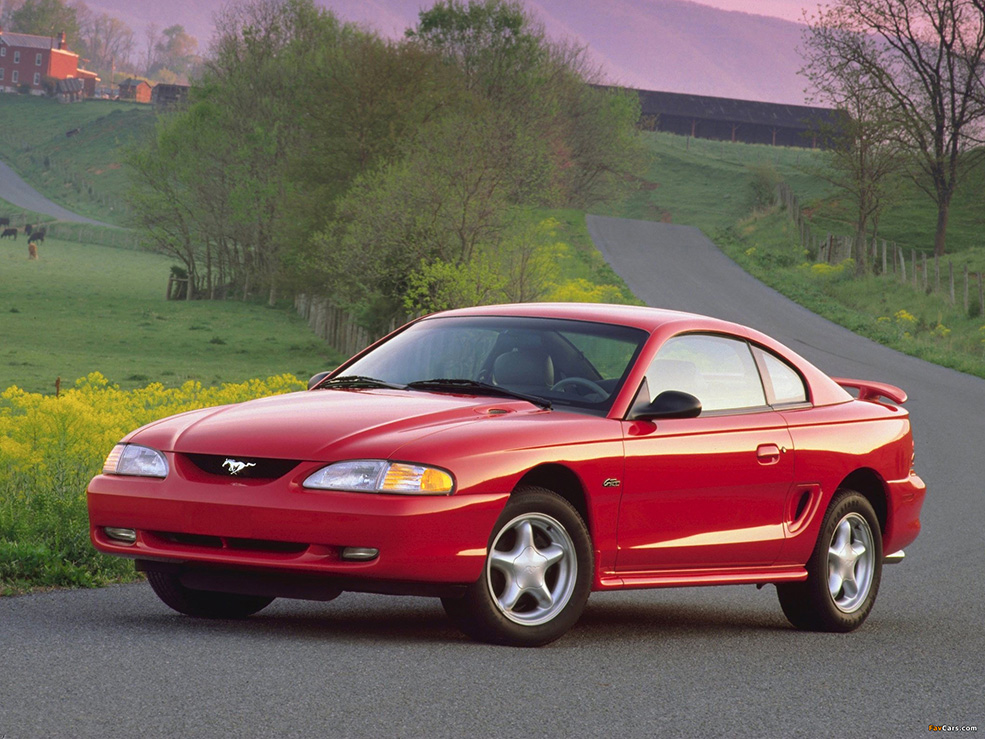 FORD MUSTANG IV (1994-2004)
The fourth-gen Mustang represented big improvements in ride, handling, steering, braking and roadholding. The basic 1994 Mustang used a 3.8-litre V6 while the Mustang GT had a 5.0-litre V8 and further suspension and braking upgrades. Only two bodies were available, a coupe or a cabriolet. In 1996 the old Windsor V8 was replaced by the new 4.6-litre Modular V8 (later found in the MG ZT 260), available with twin camshafts and 32 valves in the high-performance Cobra version. In 1999 the Mustang was facelifted to bring in Ford’s corporate ‘New Edge’ styling look, with revisions to the body and interior.

Caught near the bottom of their depreciation curve and between the classic early generations and the retro later modes, the fourth-generation Mustangs represent the current bargains of the breed. Values of the ordinary V6 and V8 models are tracking steadily along at an average of £5000 or so, with just a flicker of a sign of starting to rise at the start of this year. The exceptions are the Cobras and special editions like the Mach1 and 100th Anniversary which can command £20,000.