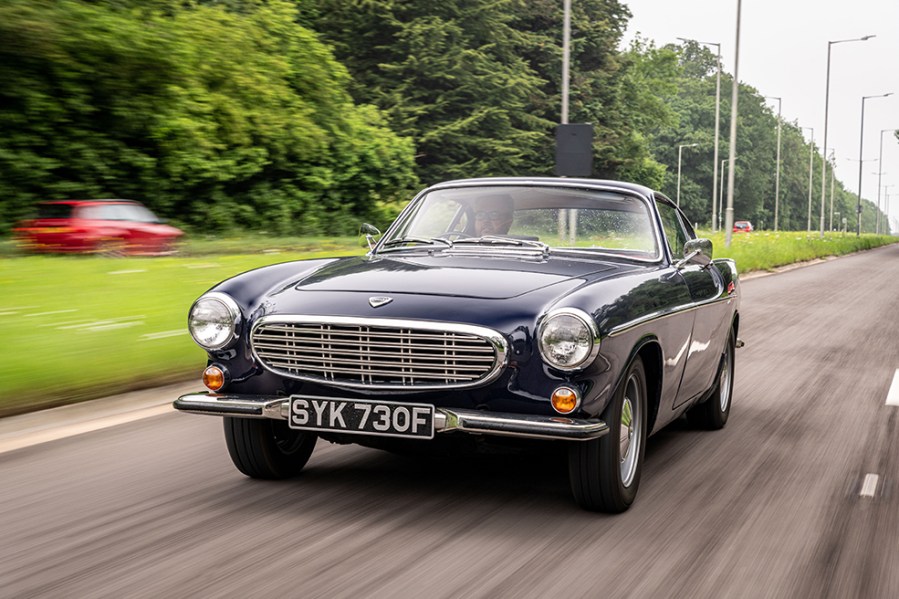 The Volvo P1800 isn’t your typical classic sports car but represents a winning formula of charm, practicality and comfort

Sports car is as fragile a term as classic car. It comes with certain expectations, which might be easy to meet if they remained the same for everyone. Sometimes a sports car must have competition pedigree to qualify in someone’s mind, or at the very least be a showcase of the latest sporting technologies for others.

In the 1960s that would often mean twin camshafts, disc brakes, rack and pinion steering, and so on. At other times, and arguably more often than the former group might like to admit, a sports car is simply in form. The Volvo P1800 might not qualify a grid position for our racy purists, missing most of the requisite technical features not to mention outright performance, but it does have the look and the charm of a 1960s sports car. It is also, of course, a classic that has risen in value quite considerably over the last decade.

The story of Volvo’s sports car begins with its founder and president Assar Gabrielsson going to America and falling for a Yankee style icon of the time, the Corvette C1. For anyone familiar with Volvo’s post-war range, it won’t be too surprising that it inspired a project back home for Gothenburgh to make an interpretation of its own. Thus the P1900 was born in 1956, but this low-volume roadster was only to be a quiet, and now often forgotten, precursor to the P1800. Not that the P1800’s production was anything like certain.

It was accepted that there was an opportunity for Volvo in the American sports car market, at a time when the famous pony cars were stirring up a storm, so there was motivation but the logistics of getting the car built and to market were trickier. Karmann was approached but a conflict of interest with rival Volkswagen, which itself was scooping up large swathes of European affordable sports car market share with its Karmann Ghia, meant that Volvo had to look elsewhere for manufacturing space.

In the end the P1800 project landed in Britain, where Jensen’s spare lines in Birmingham would be filled with P1800 assembly once the bodies were made at Pressed Steel in Scotland. With wheels finally in motion, the project that began in 1957 resulted in an unveiling in 1960 at the Brussels Motor Show. The first cars were sent immediately to North America so, while it was built here, it was only until the Spring of 1962 that the first British buyers were behind the wheel of their new Volvo P1800. 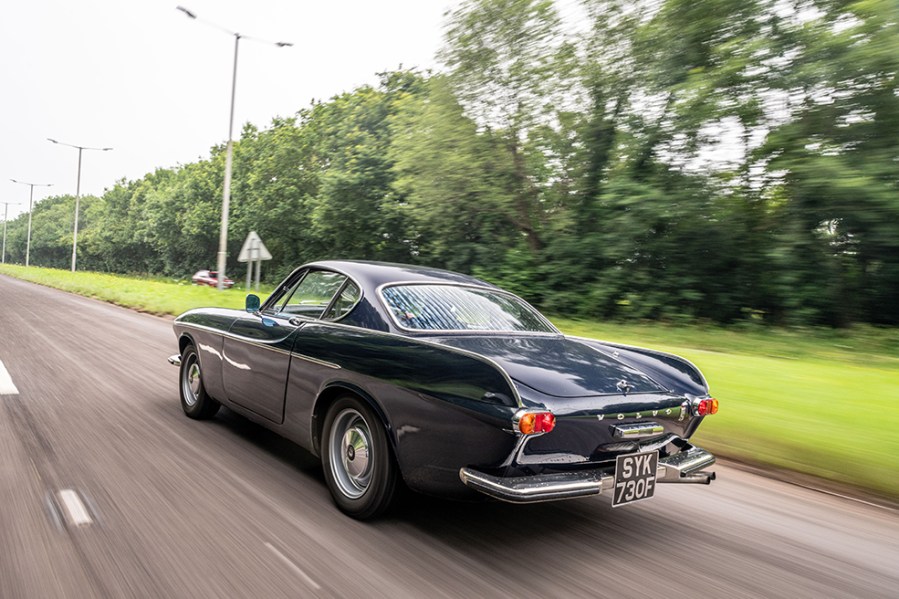 The name makes plain that underneath its long, ponton-sided bonnet lies a 1.8-litre engine. This is indeed the same B18 unit as seen in the 120-Series, however it is in the higher-specification tune familiar only to the 123GT which came to the saloon car much later. Power climbed from 99bhp to 113bhp in the years 1962 through to 1968, making the P1800 a true 100mph car from release and steadily nearing the 11 second mark to 60mph. Then in 1969 arrived the larger B20 engine which, with lower compression, didn’t provide much of a performance improvement. What did, however, was the introduction of the B20E with Bosch D-Jetronic fuel injection the following year. The 130bhp 1800E could crack 60mph in under 10 seconds and go on to hit 118mph.

Conveniently the 1800S is indeed the fastest 1800 before the 1800E but the S is in fact not for sport but Sweden. Those cars built by Pressed Steel and Jensen are named P1800, then when production was moved to Gothenburg in Sweden thus began the 1800S, with the P being dropped. The 1800E was, as we’ve covered, for Einspritzung (German for fuel injection), and then, finally, there was the 1800ES with the distinctive shooting brake body that replaced the coupe for the final two years from 1972-1973.

Little else changed to the 1800 line for its eleven years of production, with only minor revisions of the interior in 1969 and 1972 adding wood veneer to the dash and a lower line of dials and switchgear respectively.

It’s worth pointing out, then, that the car pictured here is a 1968 1800S. Those Volvo fans among you might also spot the wider tyres on this car’s non-standard wheels and its dark blue paintwork borrowed from the 120-Series palette. It is more representative of today’s 1800 rather than 1962’s one, which is the perfect perspective for the drizzly setting of our time with it rather than the sunny riviera scene one might imagine for some other glamorous 1960s sports car.

It’s spacious inside: there’s no clambering in, avoiding sills or wiggling around steering wheels, it’s simply a case of lowering yourself down slightly into a wide and comfortable seat. The ignition is neatly placed on the right edge of the dashboard and, with a pull of the below-dash choke, the Volvo spins into life quickly.

I set the fan-assisted heater to the windscreen and crack open a quarterlight to clear some of the rain I’ve brought in on my coat, then realise how settled the engine is. Considering its 10:1 compression ratio and that it has a hotter cam than the most sporting saloon in the family, the 122S, the 1800S runs cleanly enough from cold to simply put it into gear, again no trouble, and pull out into traffic. 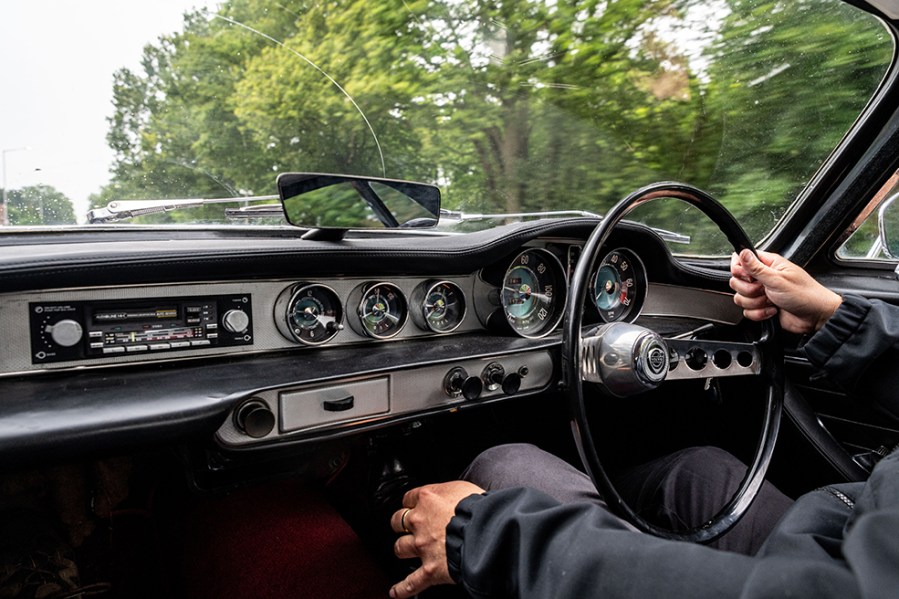 The throttle pedal is heavy and takes some getting used to. This tends to highlight the fact that there’s only modest performance on tap once you get to the end of the pedal’s travel. At first it feels gutsy, happy to swallow gears around town and bumble around at low revs as the choke can slowly work its way out.

Out onto the main road, leaning into the throttle reveals a bark from the engine as the two carburettors work their best out of the engine but there’s little sign of the peaky performance suggested by 113bhp at 6000rpm and 112lb.ft at 4000rpm. Instead it’s a determined but undramatic climb up the speedo and an encouragement to flick the right-hand stalk into overdrive as the engine sits fussily at 55mph. Softly it thwomps down in the revs and then the 1800 feels completely settled. The difference is 15mph per 1000rpm and 21mph per 1000rpm but it’s more than this; the suspension is working at its most comfortable and the steering finds its sweetest point. Front discs, later all round, and telescopic dampers with coil springs all round are part of the package.

Bumbling along long-twisting A-roads is the Volvo’s speciality. It settles on its supple suspension, always feeling connected with the road but rarely ever jolting over broken tarmac, and the at times woolly cam and roller steering has a pleasant way about guiding the car from gradual steering inputs. Apart from being ready to flick off and on overdrive for the occasional hill steep enough to require such action, the 1800S is undemanding.

It is, really, exceptionally comfortable for a sports car. The sport is, you’ll have gathered, not in testing the new 185mm wide tyres, but instead in enjoying the swoopy bodywork ahead of you and in the rear-view mirror. The interior has all the charm of a classic sports car too, with its big gauges that push out of the aluminium dashboard like polished tin cans filled with numbers. The red carpet in this one is an extra bonus and contrasts brilliantly against the rich, dark blue paintwork.

Open a door with the weighty pulls and you can’t help but look back as it clicks shut behind you. The outside handle is one of the best design details on the car, its push button a punctuation mark at the end of a beautiful sweep of chrome and bodywork. The lines extend to every corner of the car, completing the classic image of a 1960s sports car. It’s wider and heavier set than an MGB or Alfa Romeo but just as well proportioned. The roofline flows down in between the two restrained fins of the rear wings while the bonnet performs a similar trick at the front, subtly angling downward and rounding off the centre portion of the bonnet. 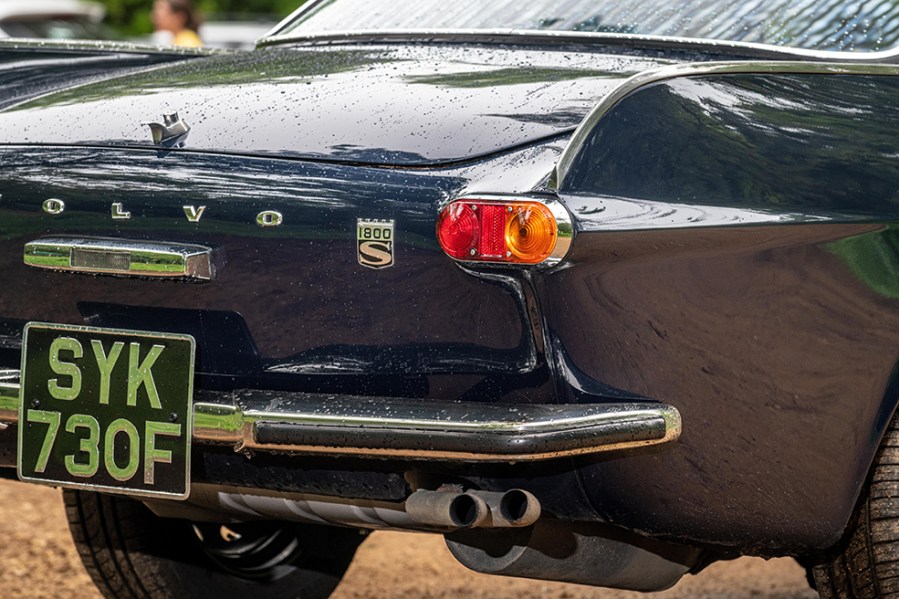 The rubber strips on the bumpers speak to its identity as a Volvo within this sphere of design. So too are the relatively large front indicators which are neatly integrated into the whole. Inside you’d be surprised at how useable a rear bench has been packaged underneath the low roofline and there’s a good boot, too. These seem like boring things to talk about with a sports car, but there is a point.

You might approach the Volvo 1800 with a doomed expectation of dynamism, but instead you find that the closer you inspect it and the longer you drive it the more it endears it to you in a different way.

Altogether it’s unusually difficult to make an argument against the Volvo P1800; endlessly charming while being robust, comfortable and practical. It’s a rather unique type of sports car.